Now AMK’s 1/48 F-14D is finally here, I’m going to build it side-by-side with Tamiya’s recent F-14D release.  The Tamiya is said to be a lovely kit, and I recently enjoyed AMK’s Mig-31, so this ought to be fun.  I bought both kits myself, and this is the first time I have built either, so you’ll be getting my honest impressions as I go, desk to keyboard with no filters in the way.

I will be building both kits side by side.  I want to do them step by step, so we can get a decent sense of how the build experience compares and where each is strong or has shortcomings.  That means I may be jumping around a bit in the instructions (for example AMK have you assemble the seats first, whereas they are almost the last step in the Tamiya) but I’ll try to keep things logical.

Before starting, I have decided to use a single piece of aftermarket: Eduard’s colour photo-etch seatbelts.  I have a pack for each kit, and I’ll just add that while I specifically got the ones that said they were for each manufacturer, when overlaid there is no difference.  This is because the kit seatbelts just didn’t impress: Tamiya give decals, whereas AMK give a very generic set of brass belts.  I’m not the world’s biggest fan of Eduard pre-painted stuff, but these will look better than the kit ones.  Other than that, I am intending to build both models as-is.

As for markings, I’m a bit torn between a few as both have some nice choices, but I’m very tempted to do two from the same squadron.  Both kits offer a marking for VF-2, not only that but both are from May 2003.  Tamiya does the colourful “100” CAG plane, whereas AMK has “106” which is a low-vis example.  That said, I’m also really tempted by the VF-31 CAG with the rainbow effect tail on the AMK, so that might change.

A final note about these kits is price.  I’m not letting it affect my analysis just yet, but I want you to be aware in case it affects yours.  Here in the UK, the Tamiya typically retails for around £80-90, which compares with their 1/32 kits which are in the £100-150 range, in general.  £150 being the Mosquito.  That’s obviously quite an expensive 1/48 jet, but if you get the typical Tamiya build experience it’s not silly either, just up the top end of 1/48.  However, the AMK can be had for about £50-60, which given the look of the kit appears to be very reasonable indeed.

Before I get started on the kits, I wanted to take a look at the design choices and see whether we can pick up anything relevant from them.  I’m not going to bore you with endless sprue shots, you can get those elsewhere and better if you want them: I’ve just picked out a few areas which I think show some interesting choices which might affect how these kits build up.  Note that throughout, the AMK is the darker plastic and the Tamiya is the lighter.

Probably the second most prominent design choice across the kits is the split upper fuselage on the Tamiya.  AMK hasn’t followed this, doing a single piece instead.  I think this is a smart choice from AMK: any fit issues in these parts will be really prominent and would feel unnecessary.  Tamiya is one of the few manufacturers I would trust to be ble to handle a choice like this so I’m not too worried, but equally I’m not sure what benefit this split brings.  One to watch out for. 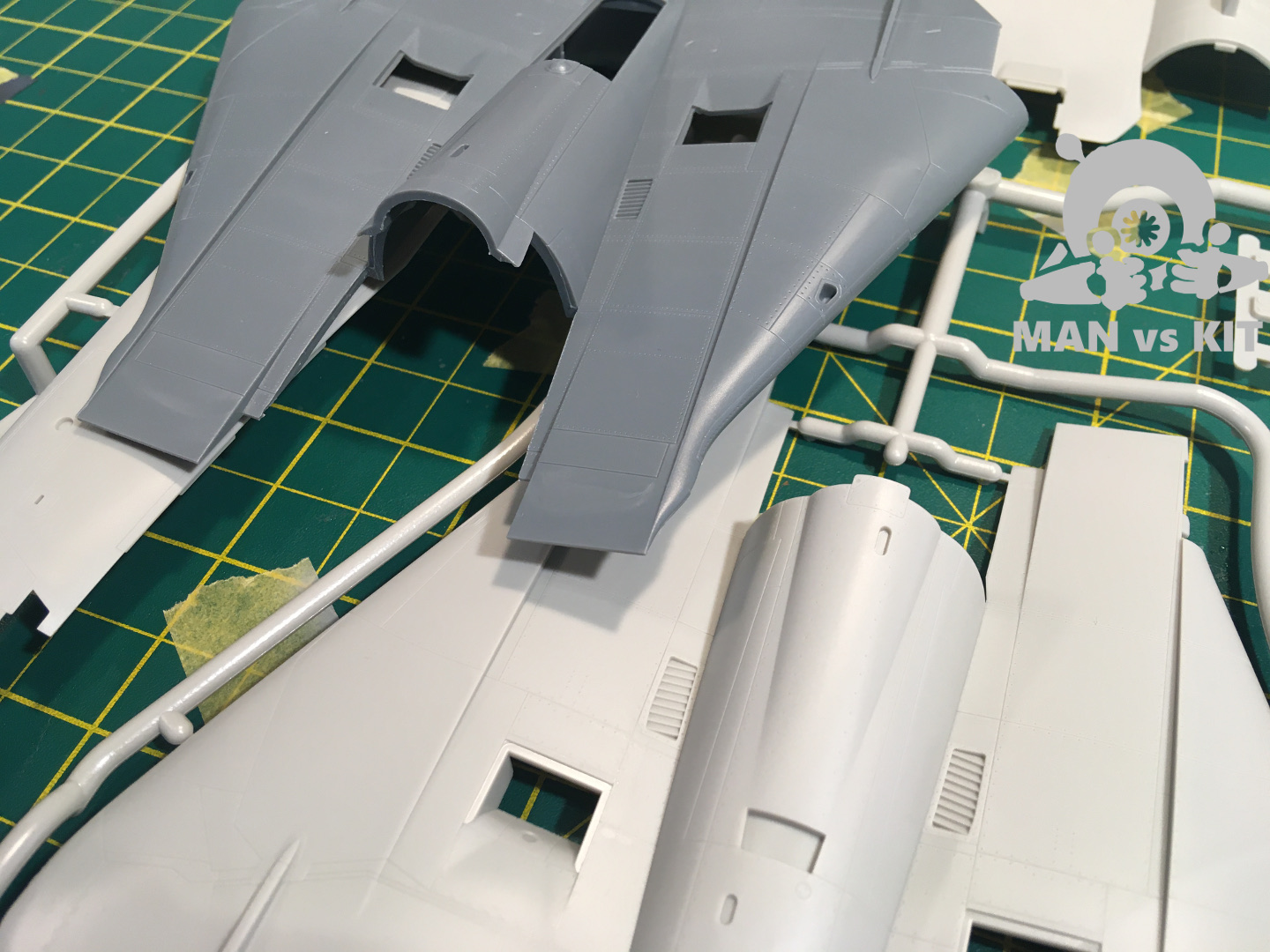 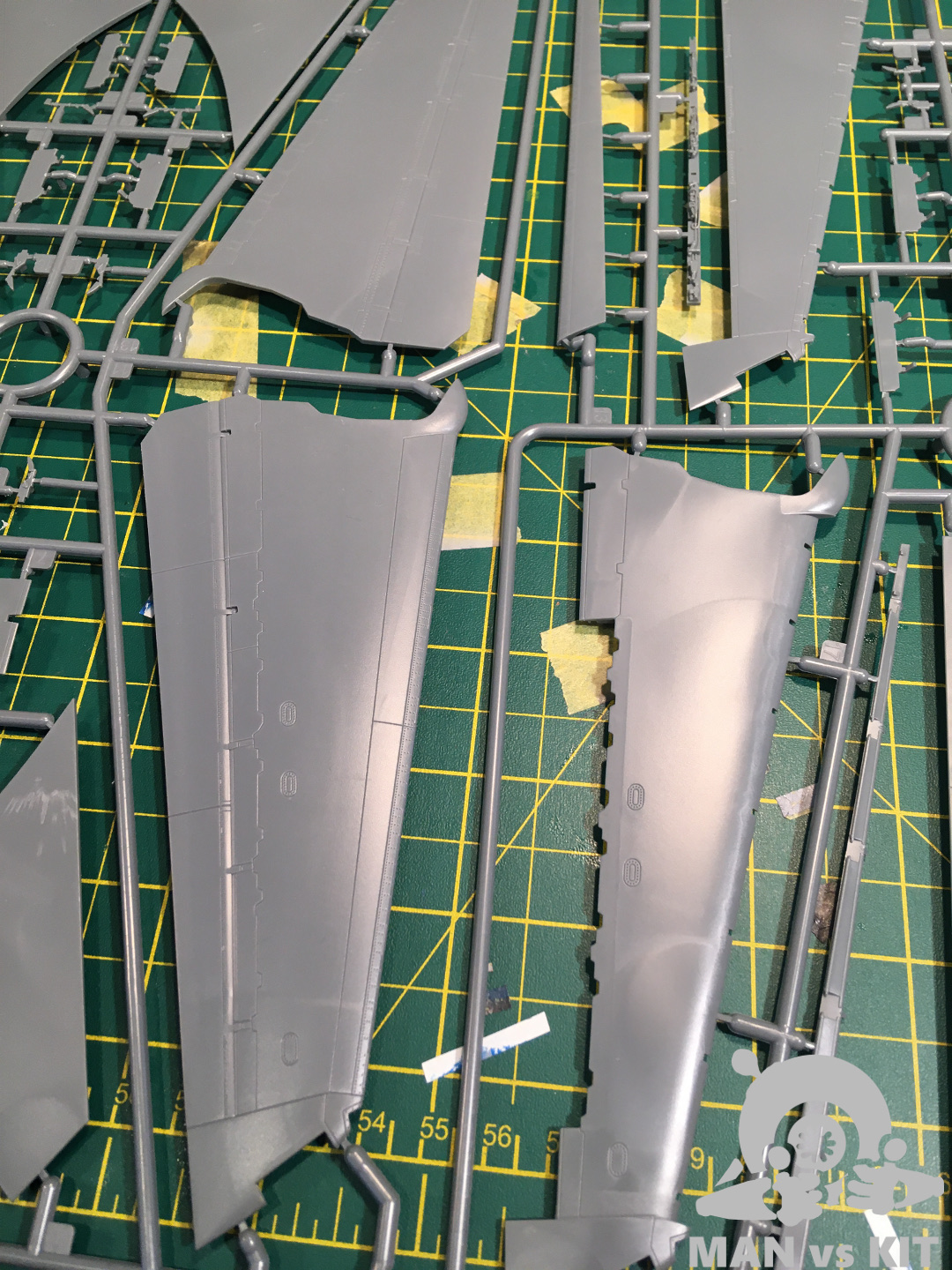 AMK offers a choice of two wings: flaps and slats extended or retracted.  This is a very welcome feature as trying to get slats to lie flat has been a huge pain on some kits. 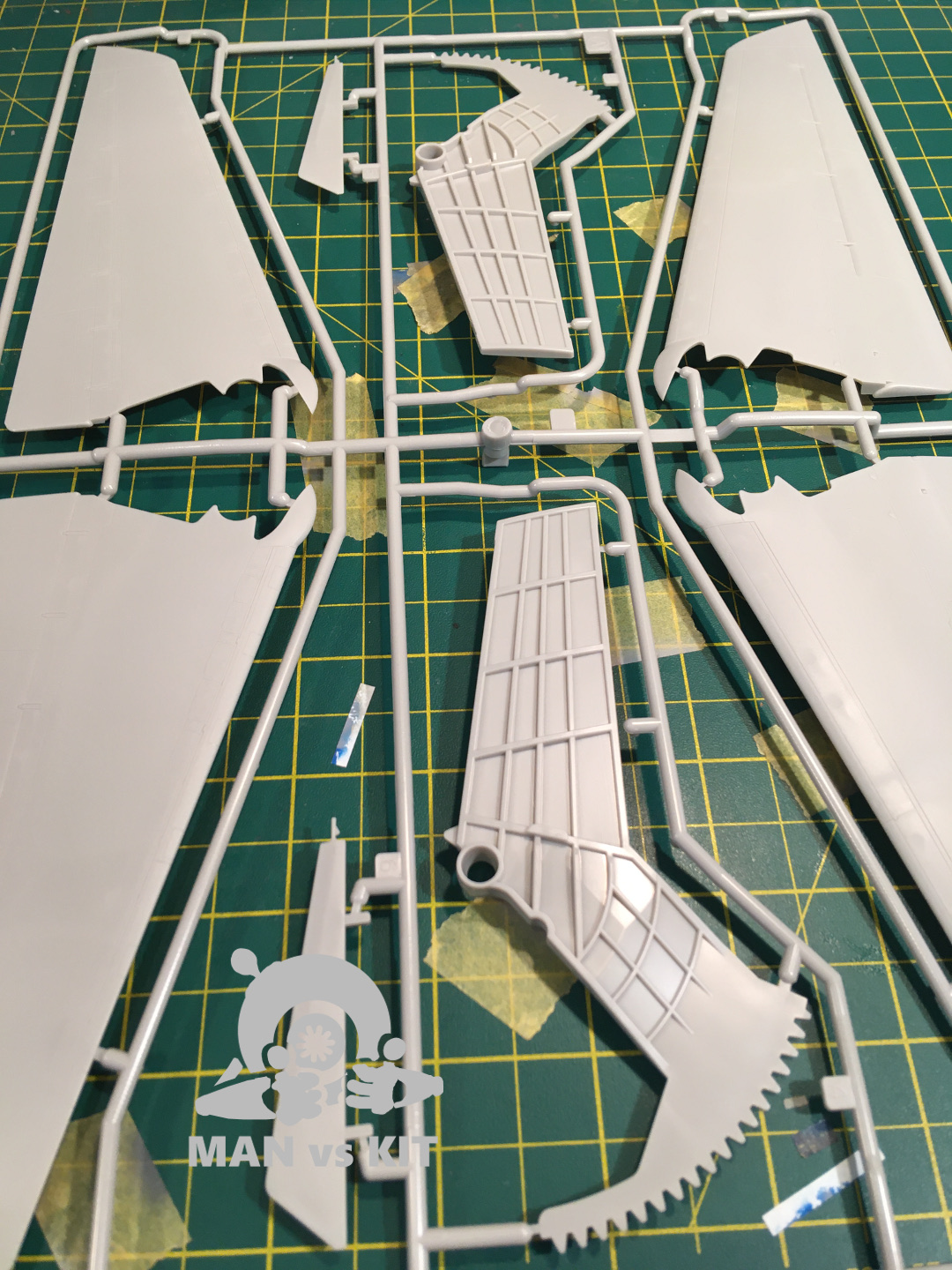 Tamiya only offer a single wing, which has both flaps and slats retracted.  This is because the Tamiya is designed to be movable after building, with the design intending for the under-wing air bags and top panels to be switched out depending on how the plane is posed.  I have to say I am dubious about this: I have generally found these movable / removable sections to lack solidity and work best with glue. 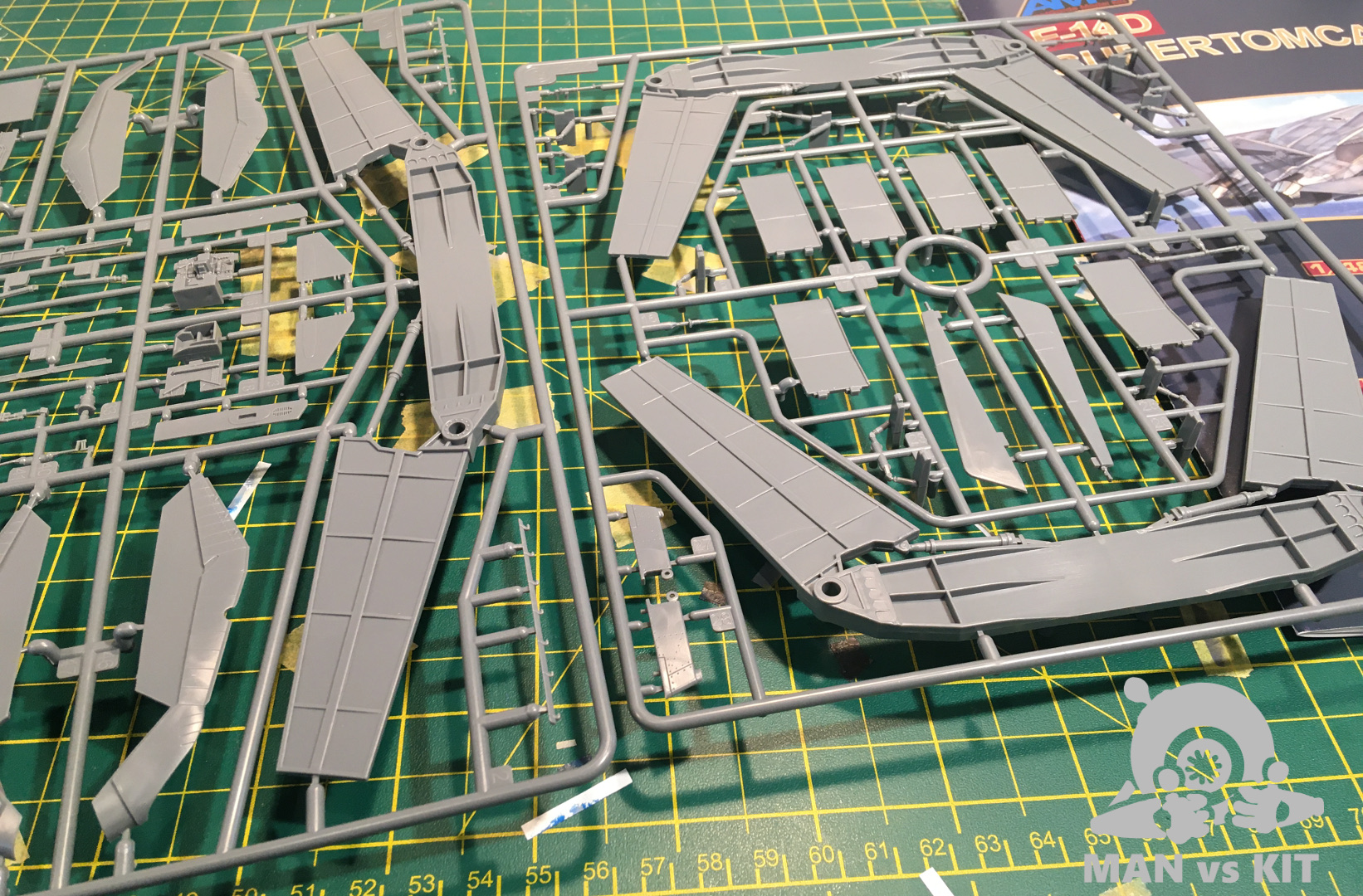 While the AMK doesn’t offer movable wings, it does provide three positions (open, swept, parked), with the air bags etc to match each one.  I really like the look of these wing cores: like on the Tamiya you build one of these into the model, then slot the wings on the end.  They look sturdy and solid, which is always welcome. 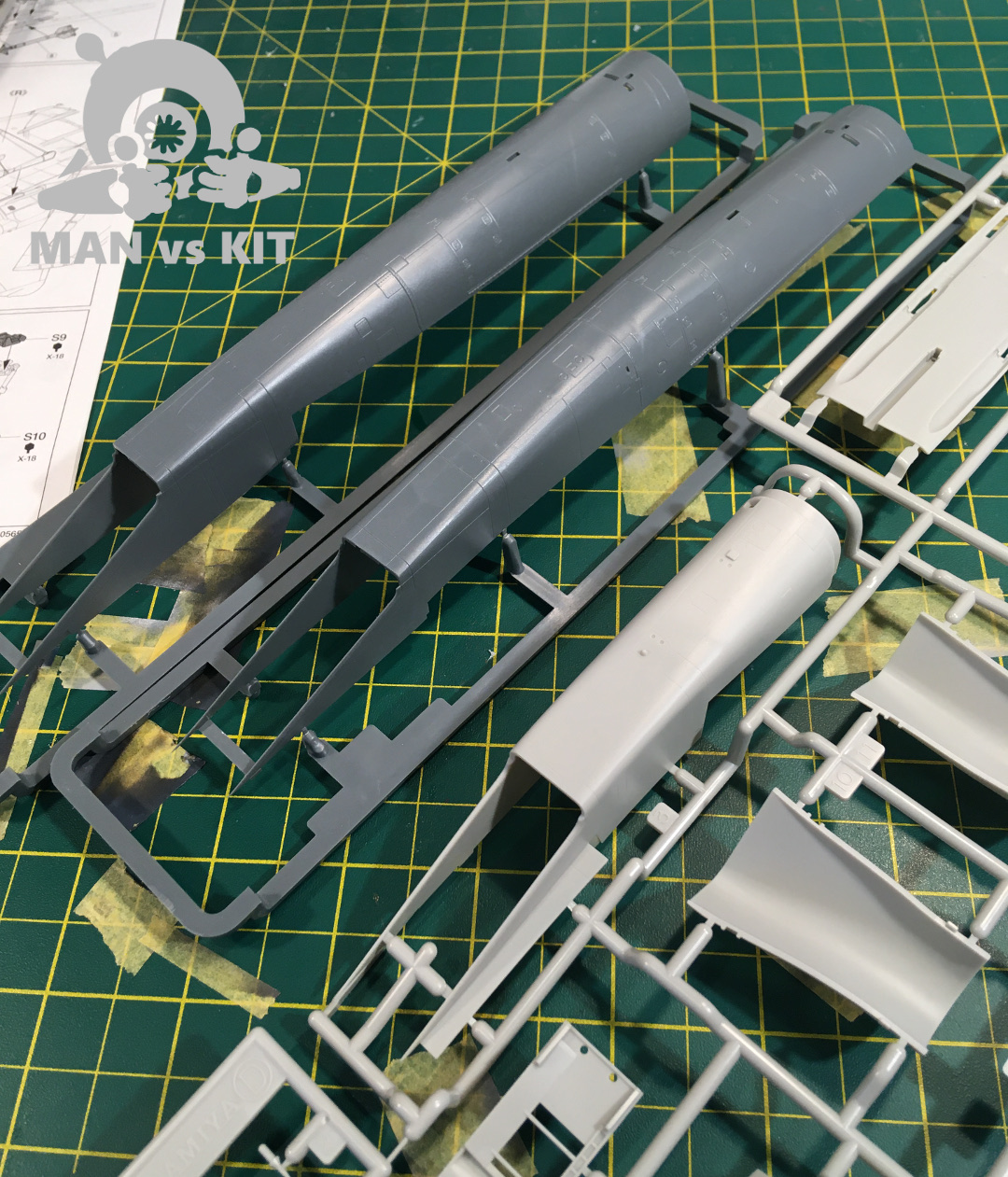 AMK have opted for this full-length engine tunnel which sits atop the moulded part of the rear fuselage.  I haven’t seen this design before.  In theory, I quite like the idea: it eliminates a potential seam where the intake tunnel joins the engine.  Tamiya have a more typical approach. 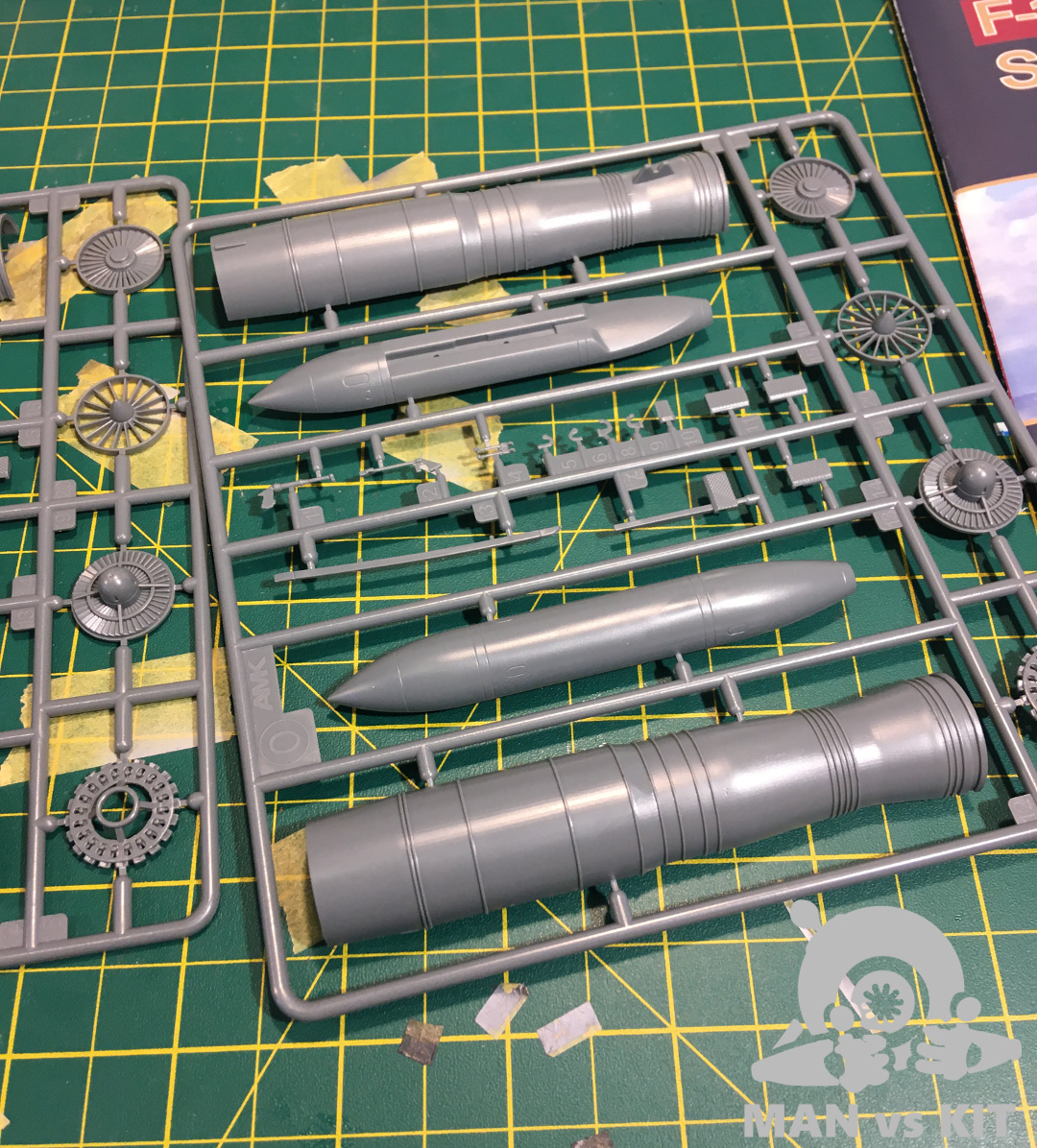 Why, oh why do AMK, GWH, and the like insist on providing full engines?  They aren’t visible after construction, they introduce fit issues (and were the main problem I had on the Mig-31) and there just doesn’t seem to be any point.  I’ll have to see if they can be left out like on the F-15E. 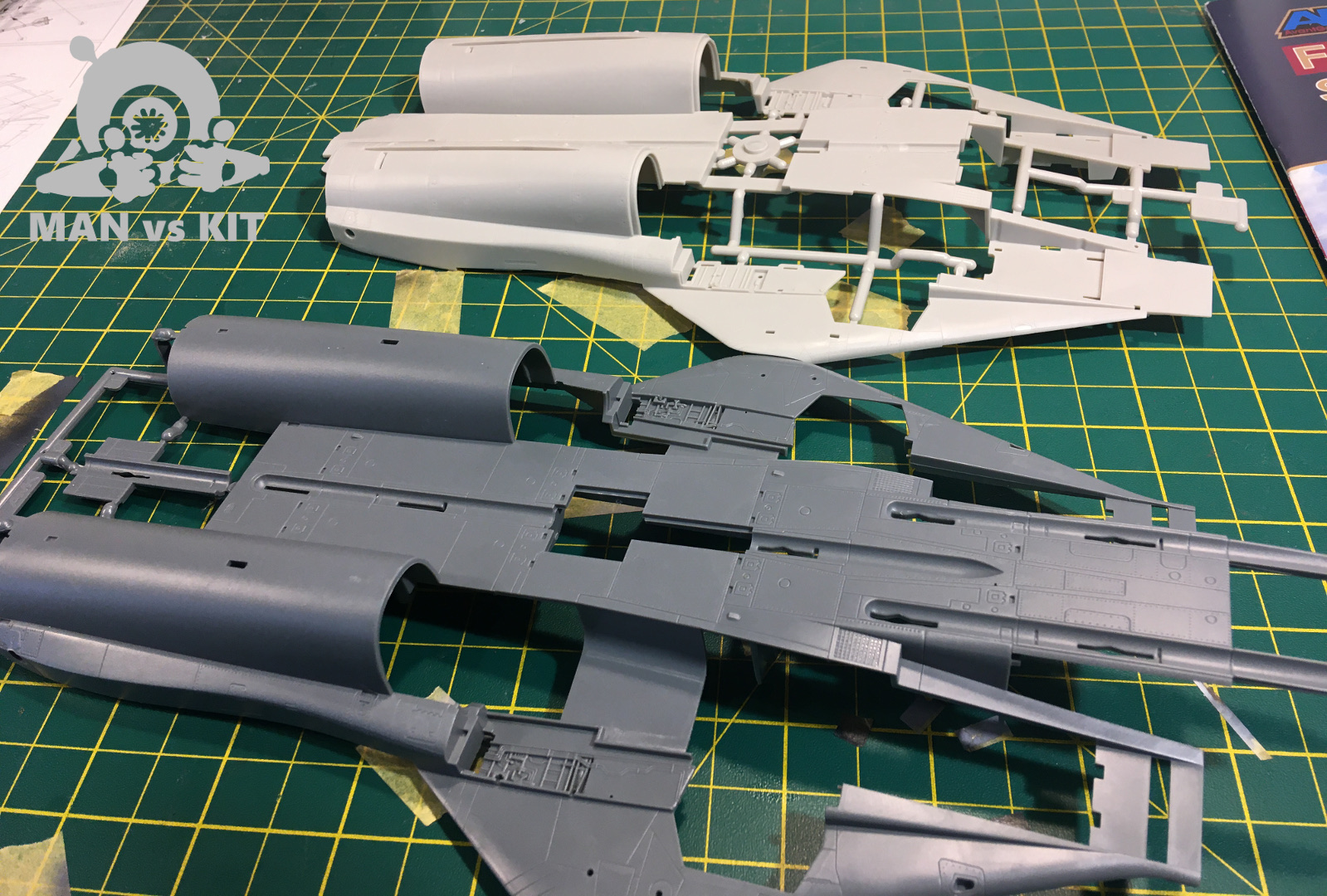 You know how people were looking at sprue shots and saying the AMK fuselage was really wide alongside the engines?  I wonder whether that was because the engine tunnel didn’t have the cover piece (#4 in my list) on yet?

The internal runners on the Tamiya are interesting, they really show the lengths they go to to achieve good injection characteristics.  No huge surprises here, though I was interested to see the differences at the front end.  Will those AIM-7 conformal carry grooves sit nicely?

This also shows the rather superb detail AMK has build into the gear bays. 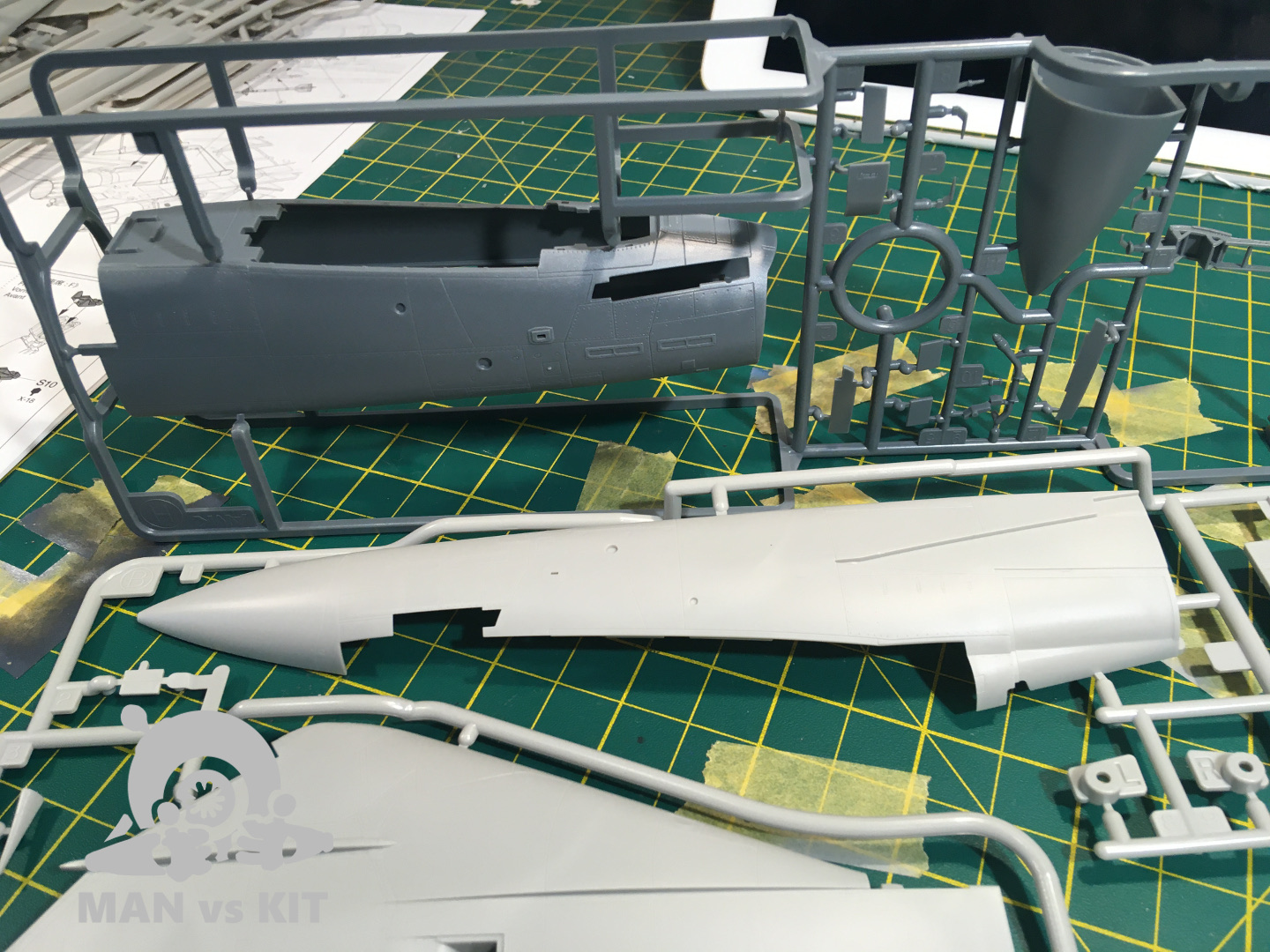 Here is the most noticeable difference between the two.  Tamiya has gone for a very standard left / right split with the integral radome.  No real surprise, this is easy to build with little risk of shape and alignment issues.

AMK has done another of their signature single-piece noses.  These are rather impressive, and on the Mig-31 was very nice indeed.  They have provided a separate radome, which may be a requirement for this moulding but is also in keeping with their approach of offering more details, in this case a full radar.  If you’re closing it, that will be a useful place to stash some weights: I remember the Eduard one requiring a fair bit of nose weight. 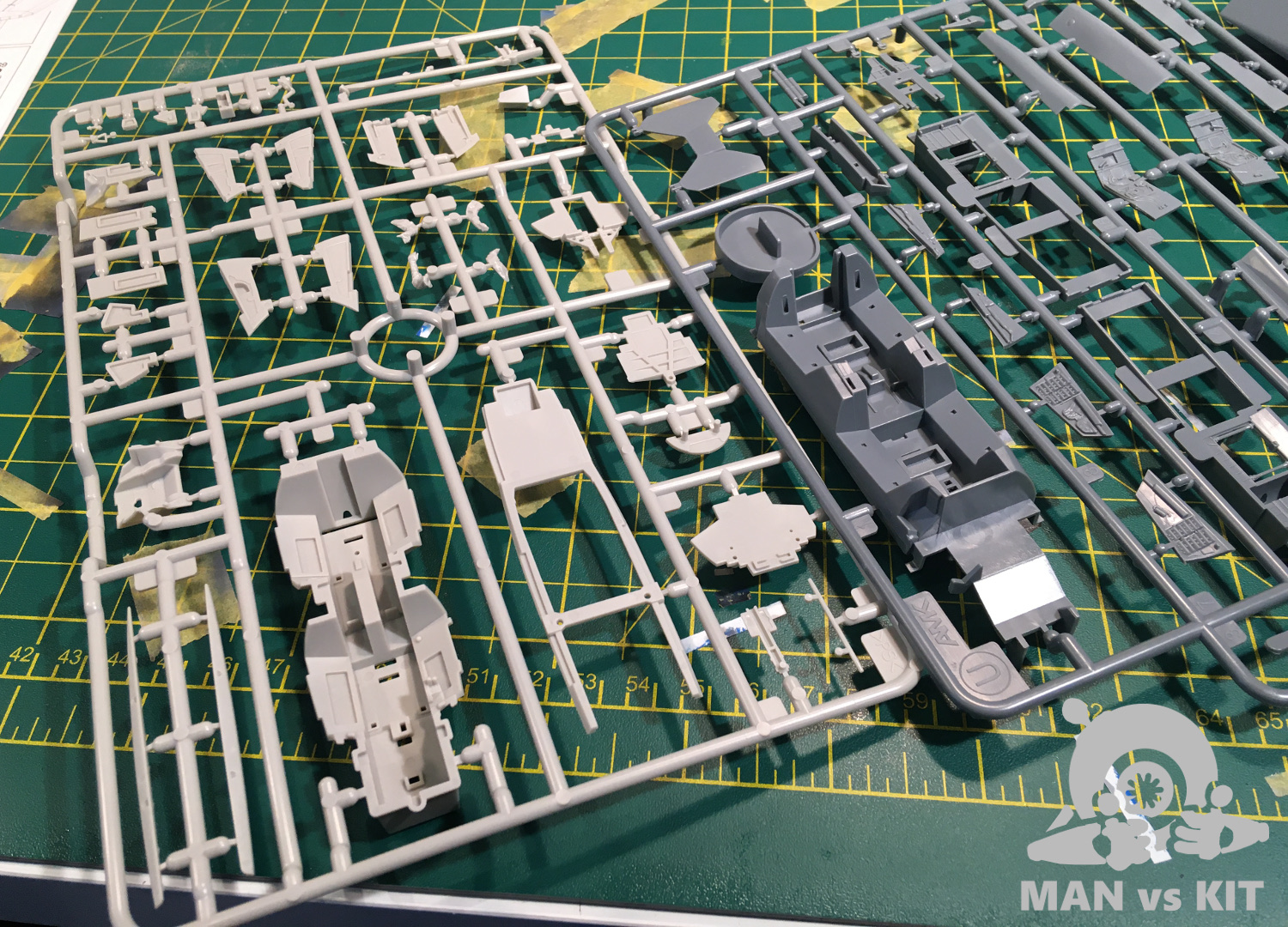 Both kits appear to have very nice cockpits.  The same approach of applique details is in both, so it will be interesting to see how they compare.  At least by eye, I keep getting the impression that the AMK is very large. 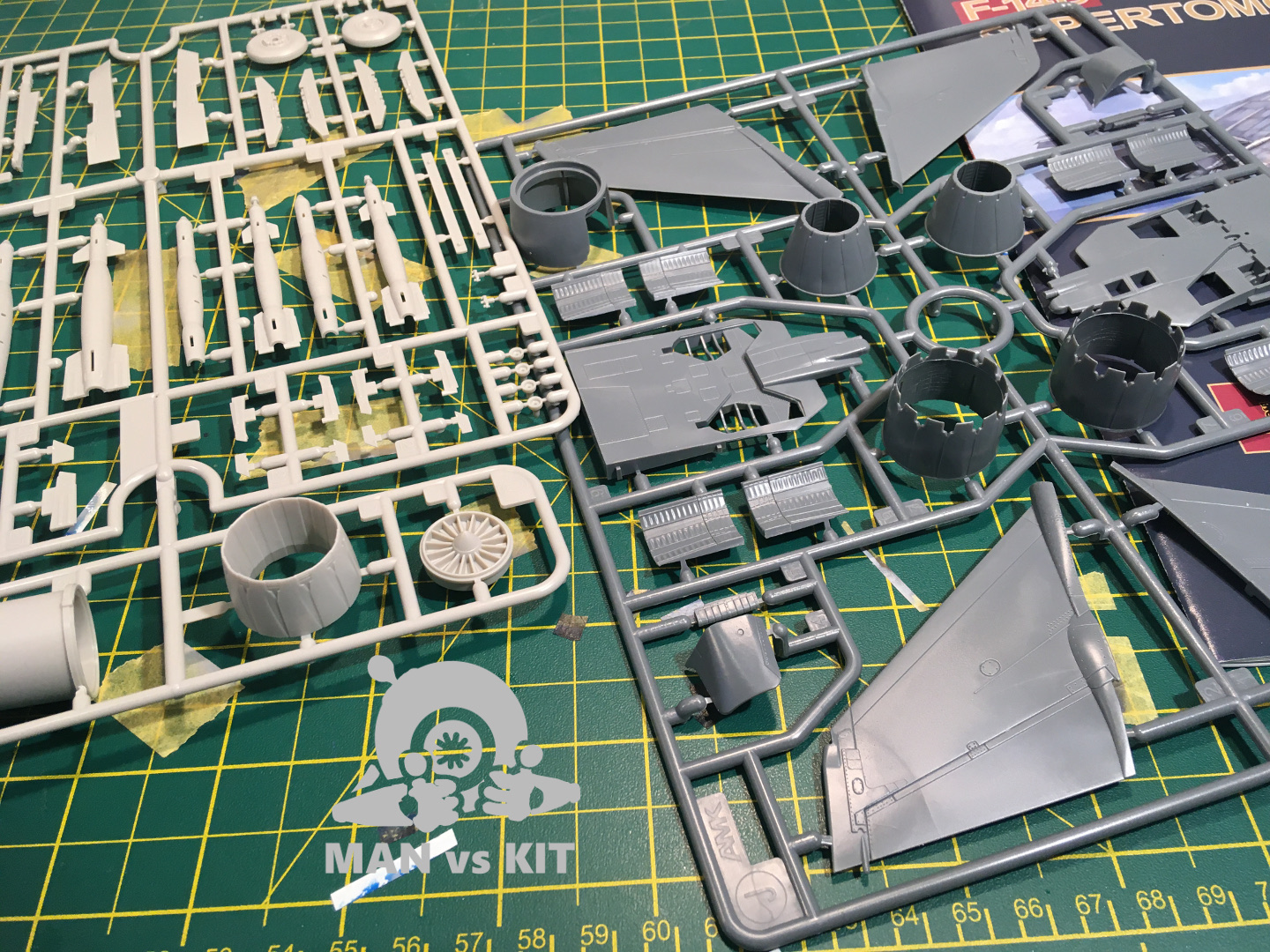 Both sets of exhausts look nice.  Tamiya have gone with a single-piece which should be much appreciated, whereas the AMK is definitely more complex.  Hopefully it will fit well, those joins won’t be easy to fix. 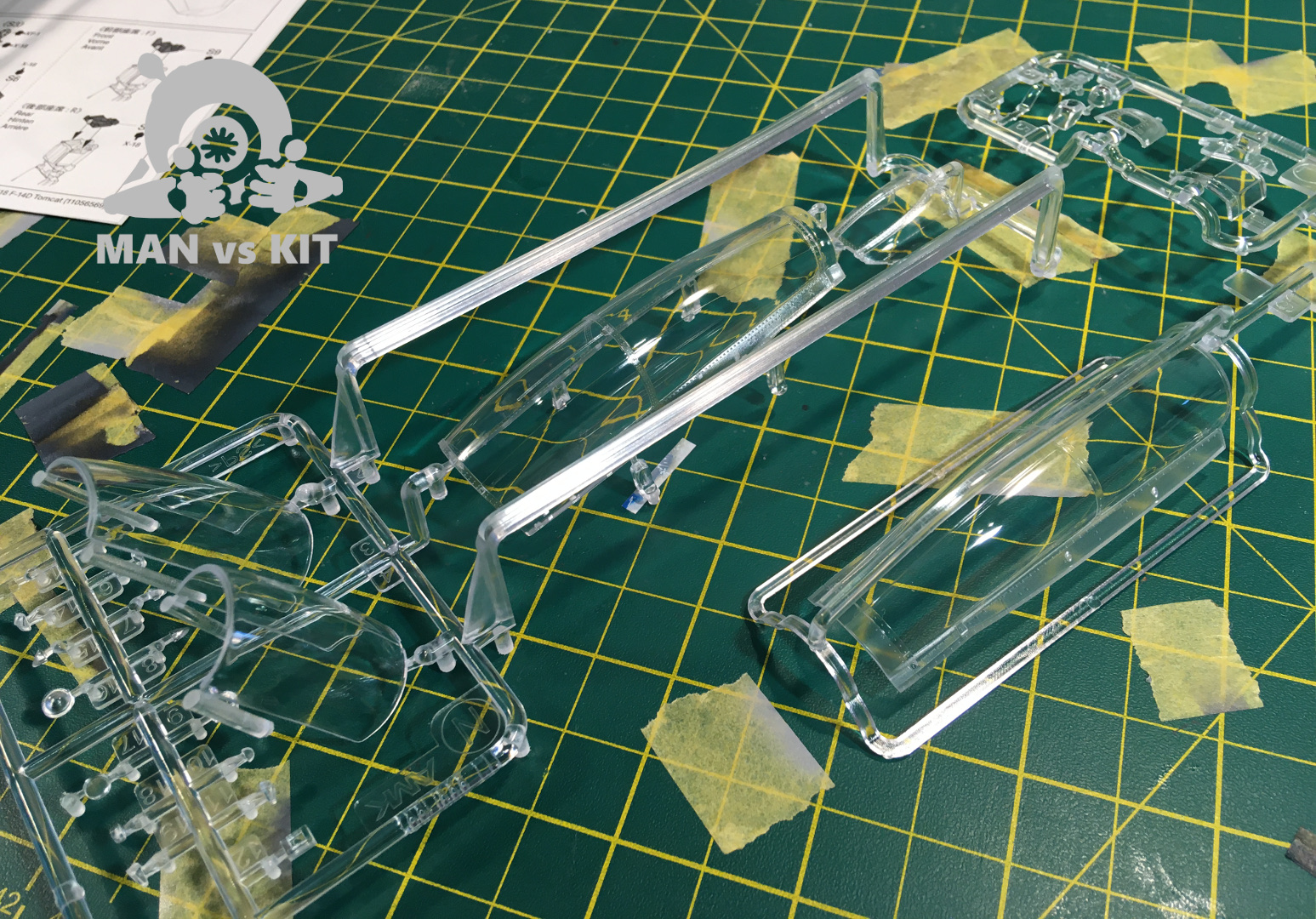 Both kits offer a single-piece canopy which is moulded in three or four lifters.  Thus the Tamiya has one sean to fix, the AMK two.  There’s not really much way around this for canopies, though AMK has offered a second option: a pair of just the transparency which slots into a separate frame.  Interestingly these parts have been moulded in a vertical plane, meaning they do not have a seam, and I think that is why AMK have experimented with this.  That said, I have heard that these don’t fit very well into the frame, which would be a shame: innovation is great, but it has to work.

Regardless, we have two options and it will be interesting to watch them go together.

These kits are both looking like a lot of fun.  Both have nice details, interesting choices, and should build into stunning models.

Another thing worth mentioning is the detail and complexity.  I don’t think these kits really target the same market.  Like most of their 1/48 kits, Tamiya are offering a really nicely detailed kit that most importantly, builds easily.  You pay a premium for that, but they allow more people to turn out lovely results.  On the other hand, I find the AMK appears aimed at the builder of complex kits.  Probably a very experienced modeller who wants the best detail and will deal with complexity and nuisance to get it.  So I do expect to see tradeoffs in both kits.

My prediction so far is that the AMK will have the better detail but sometimes be fussy and tricky to assemble, whereas the Tamiya will offer fewer options and details but do so more assuredly.

Hi,
Awesome write-up. I will be following this for sure having just bought the Tamiya F-14D.
Really apprechiate you sharing and doing this. A big thank you from my side.

Ran across your blog while I was searching if I need to add weight to the nose of the AMK F-14 or not. Guess I will wait until either you got to that point or I do. Building it now, really nice kit, don’t make the mistake I did and glue in the engine tunnels before putting in the Intake Trunk (step 6). I got them in but not easy and sanding was a pain.