A long time ago, in a town… well, a few kilometres from where I live now, I decided that I wanted to build a 1/72 Millennium Falcon.  Back then, the Fine Molds kit was the only option, so when I saw that it was on a 30% off sale at HLJ, I snapped it up.  I bought the Tamiya 1/32 Mustang at the same time, and given that I built that many moons ago indeed, I really did sit on this one for a long time.

The problem was that when I first opened the huge box, what I found inside was daunting.  Since I really wanted to make it look appropriate, and I was just starting to learn weathering technique at the time, I put it away and forgot about it for a long time.

Like the Trumpeter HMS Hood, Tamiya Corsair and Mosquito, plus a few other intimidating kits, this one eventually got built because of Jim who said that we improve by building the scary kit.  Because the big, scary kit requires new skills and we want to do well, there is more incentive to learn. 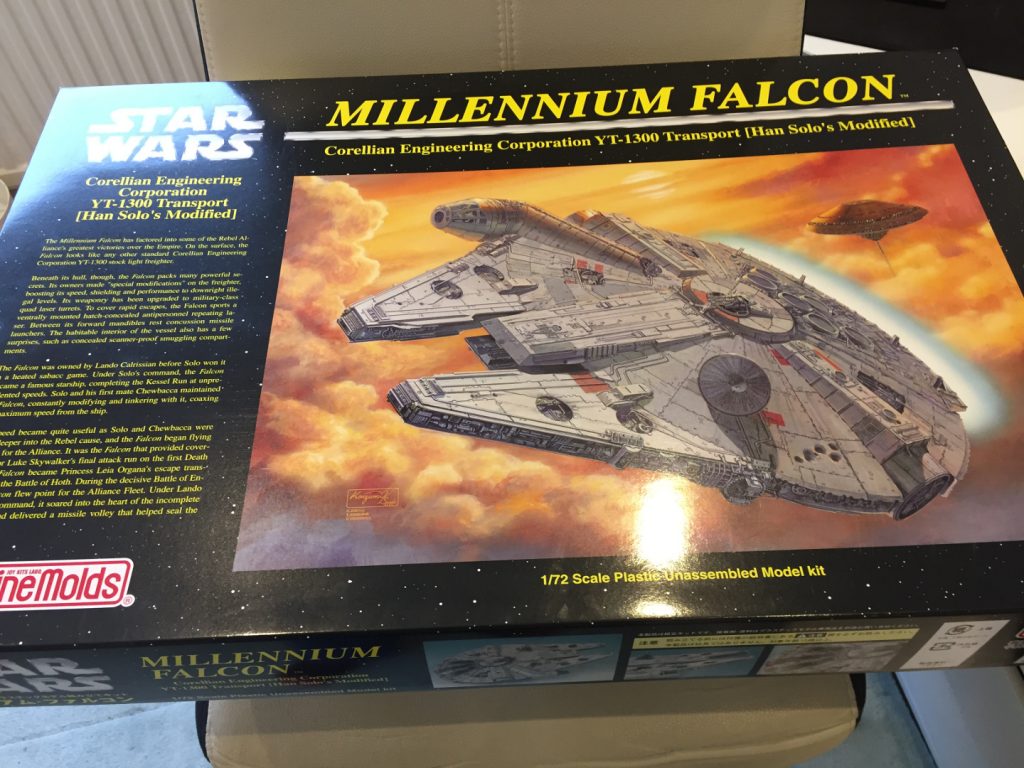 Episode 1: Attack of the Sprues

The Fine Molds 1/72 Millennium Falcon dates from 2006, and was well received at the time.  I can see why: opening the immense box, the kit is beautifully presented: with a huge glossy card showing photos of the studio model, sprues held in cardboard boxes, and the whole thing so tightly packed that nothing can move around. 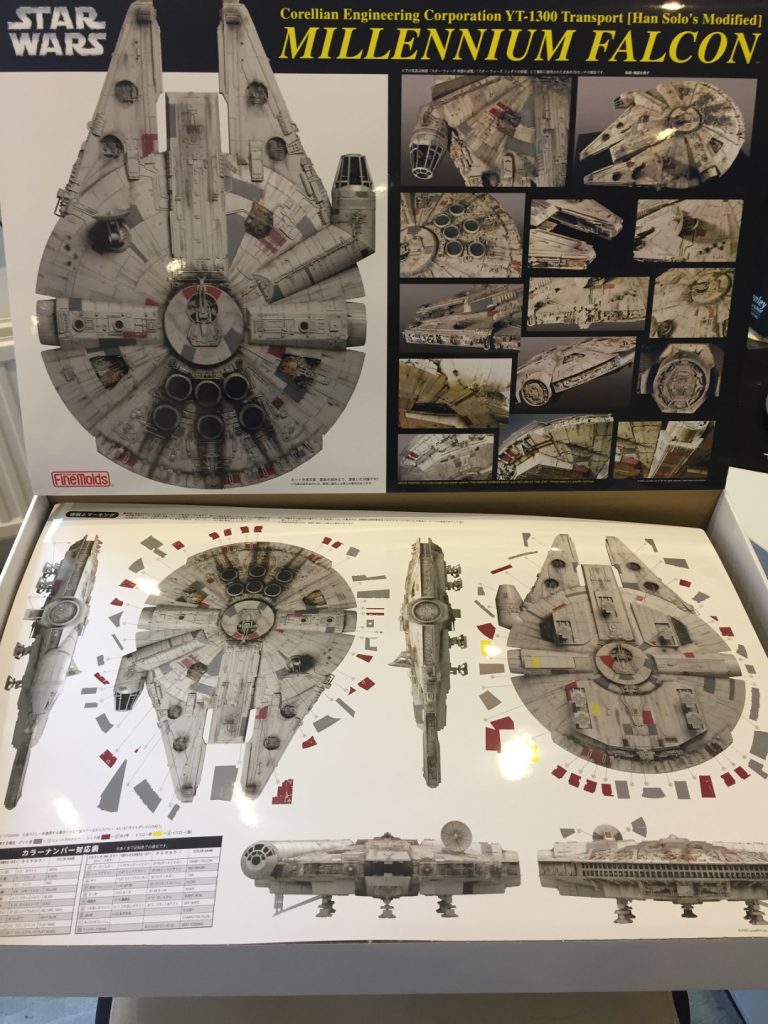 I don’t know how it compares to the Bandai kit.  I’ve never seen one in real life, and although it is the elephant in the room, I’m not even sure the two are comparable.  Yes, they represent the same thing in the same scale, but the Bandai is twice the price of the Fine Molds, and for that I would expect a very different kit.

There are a few things to note.  First, this is clearly a model of the studio model, specifically the one used for The Empire Strikes Back.  Most of the time this is a good thing: that was a large studio model, improving upon the one used for A New Hope, and access to it allowed Fine Molds to accurately recreate a lot of the little fiddly bits that adorn the original.  The number of recognisable tank parts is quite amusing. 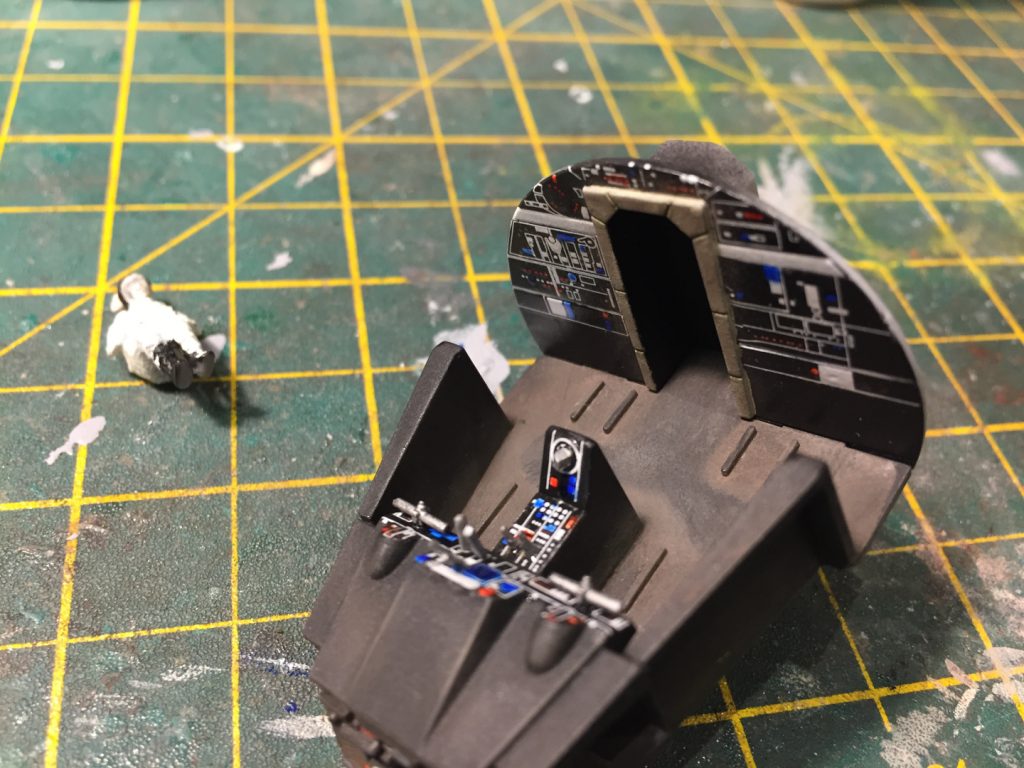 However, the use of the studio model is limiting in the cockpit and turrets.  These areas were of course studio sets, and the studio model barely represents them.  Why would it?  The harsh external lighting would leave them as dark areas anyway, and close up shots would be better with the actors.  Therefore, these are also a bit lacking in the kit.  The cockpit especially lacks depth and complexity.  Complexity can be added, depth is harder.  That said, it’s 1/72: I put a lot of effort into painting and weathering the cockpit and gun turrets, and neither are really visible on the finished model. 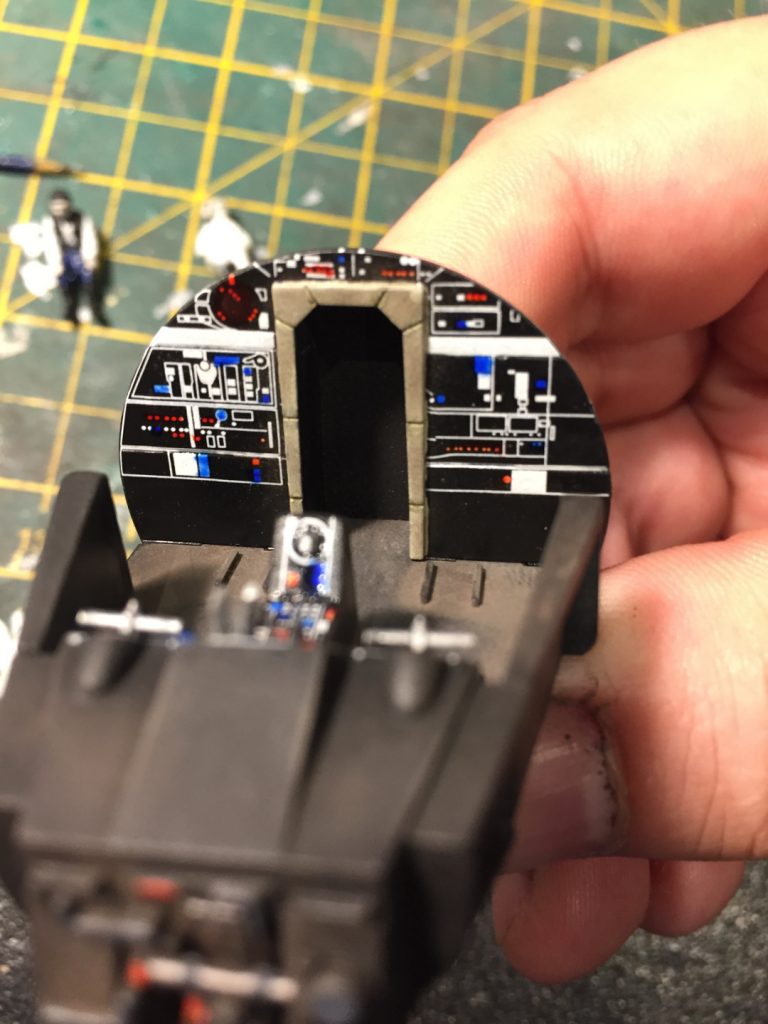 The other issue with it being a model of the studio model is that this doesn’t actually represent the ship as shown on screen.  What I mean is that the studio model is designed to be photographed under very harsh studio lighting, which requires stronger colours in order to look right.  So there is a real risk that following this example won’t lead to a model that looks right on the shelf.

Episode 2: Revenge of the TET

I built the model almost a year ago now.  For something that I was so looking forward to building, it was an energy-draining experience.  Every part needed a lot of parting lines to be cleaned up, and once you get into the fiddly detail, you realise that the moulds weren’t cut very well.  For example: if you have a pipe laying on the surface, where part of it is a raised moulded detail on the hull, and the rest is a pipe which will be added, there are a few key requirements.  First, the parts need to be the correct length to join up.  Second, you need a convincing join: ideally a step, but a butt join will do as long as the edges are crisp.  What you don’t want is for the parts to be too short, and then to have rounded ends so they simply can’t join.  Yet that’s what happens here, part after part. 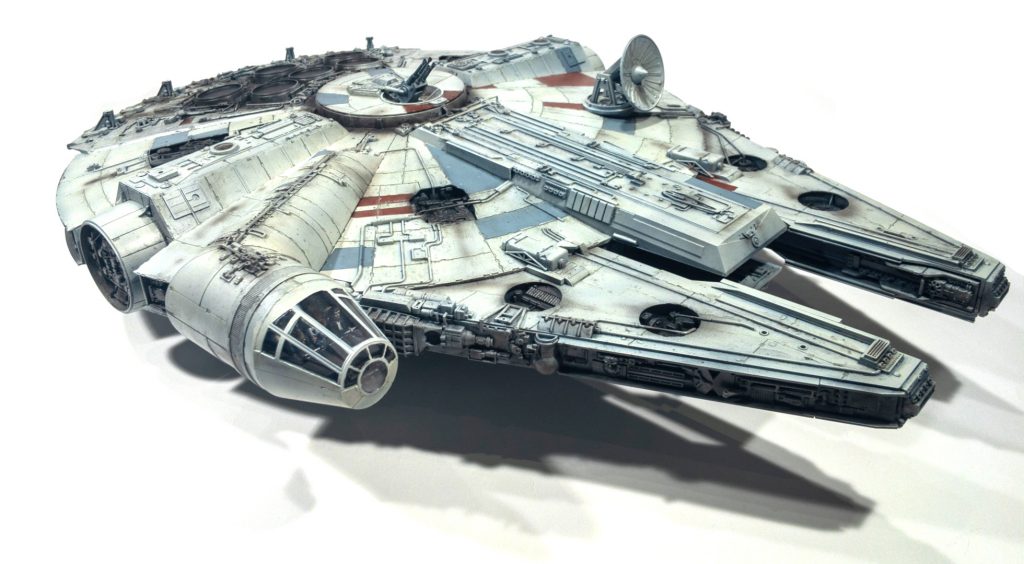 The big bits go together well, and solidly.  The small parts sometimes lacked positive locating points, but overall weren’t too bad.  Sometimes the parts looked quite different to the studio model, which I thought was odd.  The landing gear were a nightmare: they simply lack a good fit into the hull, and despite hefty gluing, had a tendency to just fall out when the kit was moved, showing that very little glue surface had been achieved. 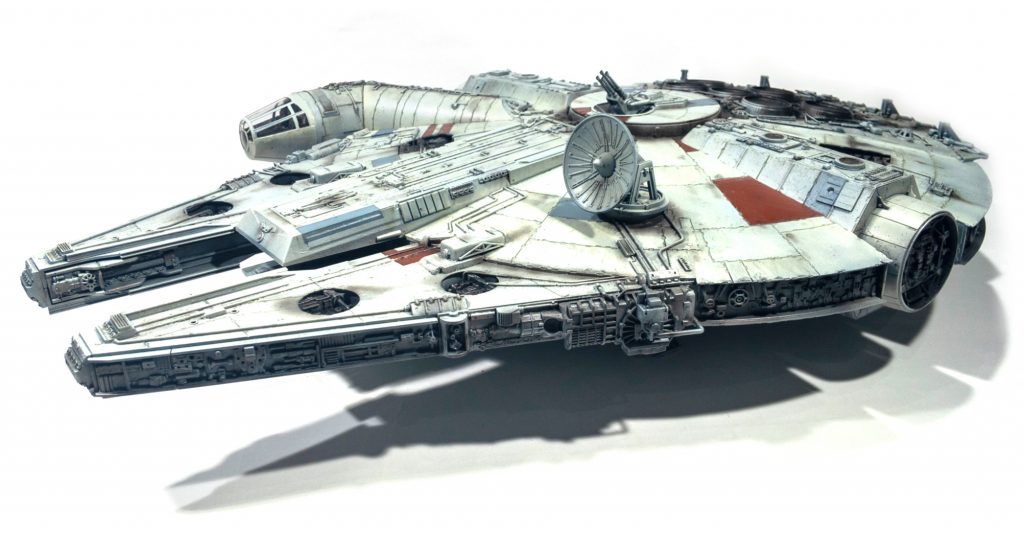 The plastic is very odd.  It’s really brittle, and has an odd scratchy / screechy feel when in contact with other parts.  It’s not bad, just… odd. 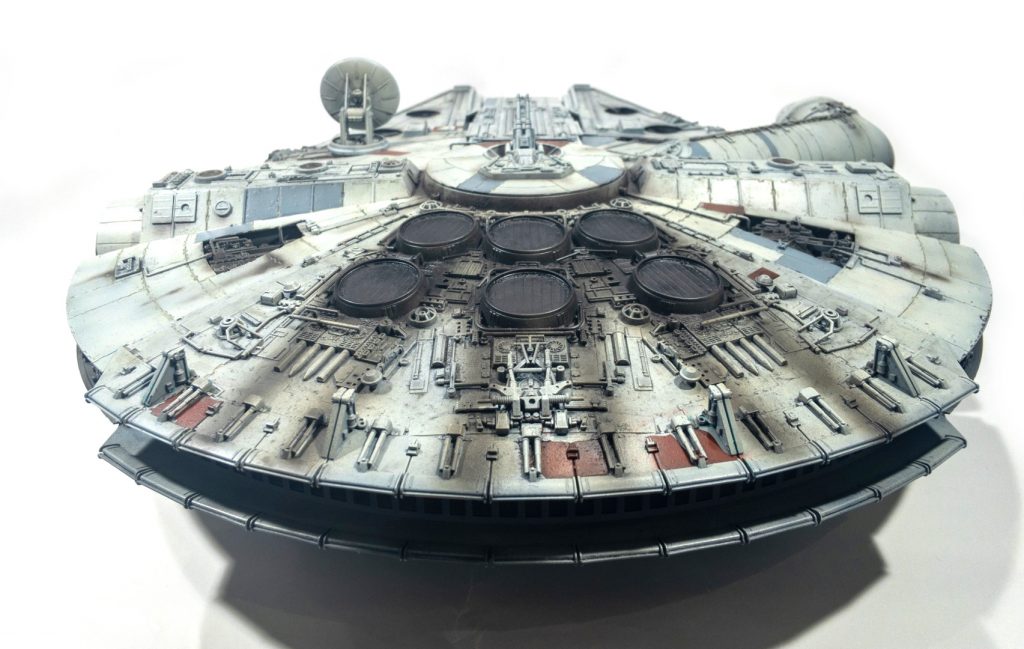 If you ask about painting one of these on the internet, you get an incredibly high proportion of what I consider to be really strange attitudes.  Attitudes that you never encounter in other modelling fields, like:

“The studio model was painted with Floquil White so just do that,” (good for you, but, again, I’ve stated my intent to use MRP).

It gets to the point where the simple failure to do basic reading comprehension responses (“Tamiya XF-whatever is a good match”) no longer ping on the radar of annoyance.

Just to clarify, this isn’t me seeking out advice and then snarking at it.  All of the above were unsolicited advice received in response to my posts showing the process I was going through to find a nice blend of MRP colours.  For reference, I eventually settled on a 2:1 mix of Insignia White to Clear Doped Linen. 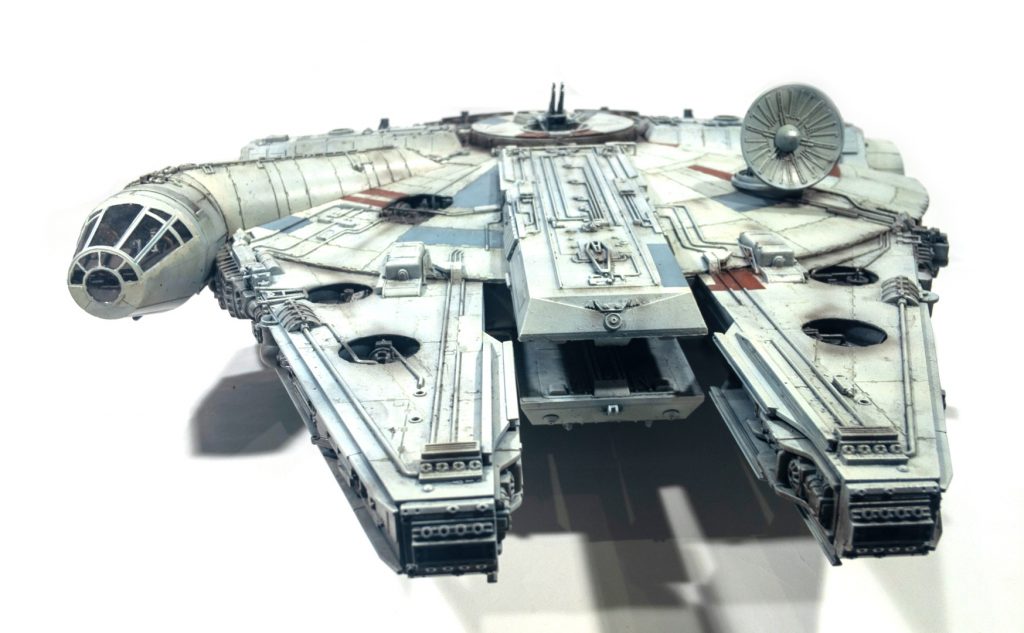 The first time around, I had a nice finish of this blend, and decided that this would be the model on which I would first use oil paint rendering.  While this would eventually turn out to be a fantastic, flexible way to shift surface tones, it’s fair to say that at this point I had only the vaguest idea of how it worked, and got it horribly wrong, using far too much oil.

The result was horrible, and that’s why the model got put away for most of a year. 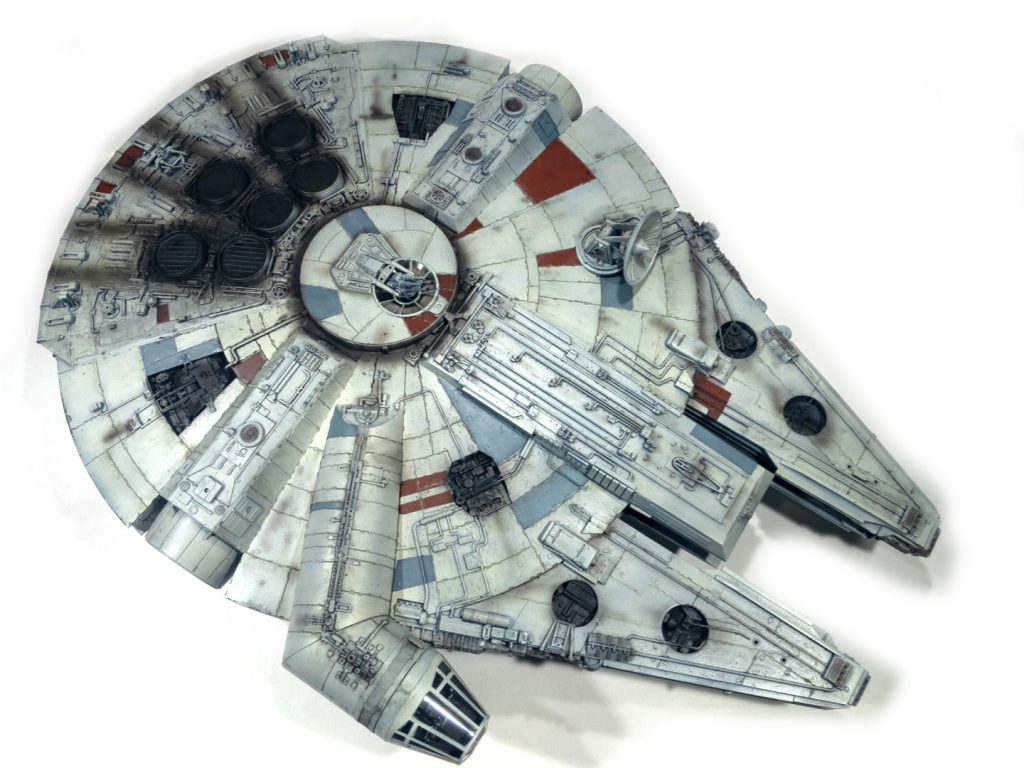 When I got to it again, I had more knowledge of how to use oils and the effects one can get, but it’s something that I’m still learning hugely with every build.  Having cleaned off the awful mess I had left before, I set to it with a new approach.

With this model, I wanted to achieve a more stylised look than I would ever attempt with a real-world vehicle.  Therefore, I set about deliberately adding darkened shadows with my airbrush.  I highlighted a few raised areas in white, but most of the work was in darkening because the surface colour was already quite bright.  At this point I also added scorch marks and darkened sooty marks from the engine vents. 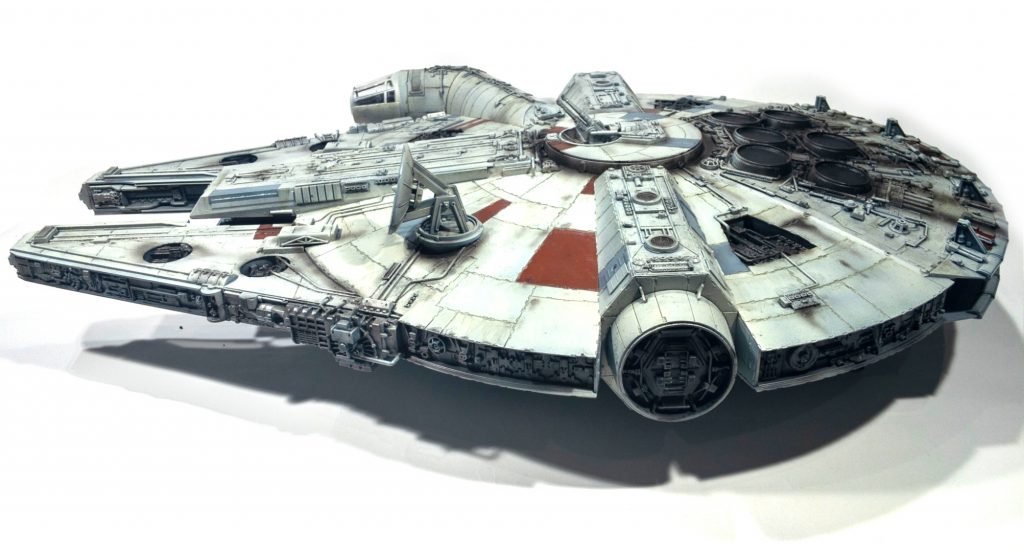 This created the sort of strong shadows which seem reasonable on such a textured vehicle.  I then further deepened them by using black oil paint, and thinning it so it would run into cracks.

I like the effect it gave, for this model.  It really wouldn’t be appropriate for a real-world vehicle, at least not for the more realistic style that I try to create.  However, for a sci-fi subject like this, it feels right. 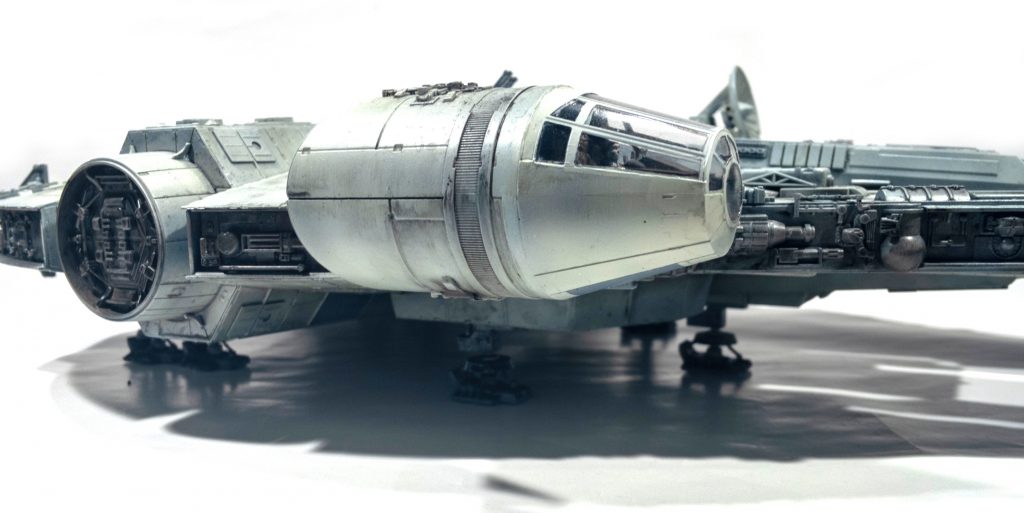 This build showed just how far I’ve progressed in a year.  Having been happy with it last summer, I put it away after the paint disaster and picked it up again early this year.  Now, I’m quite shocked at the seams and similar that I didn’t even notice a year ago.

It just goes to show how important it is to build, seek feedback, listen and learn. 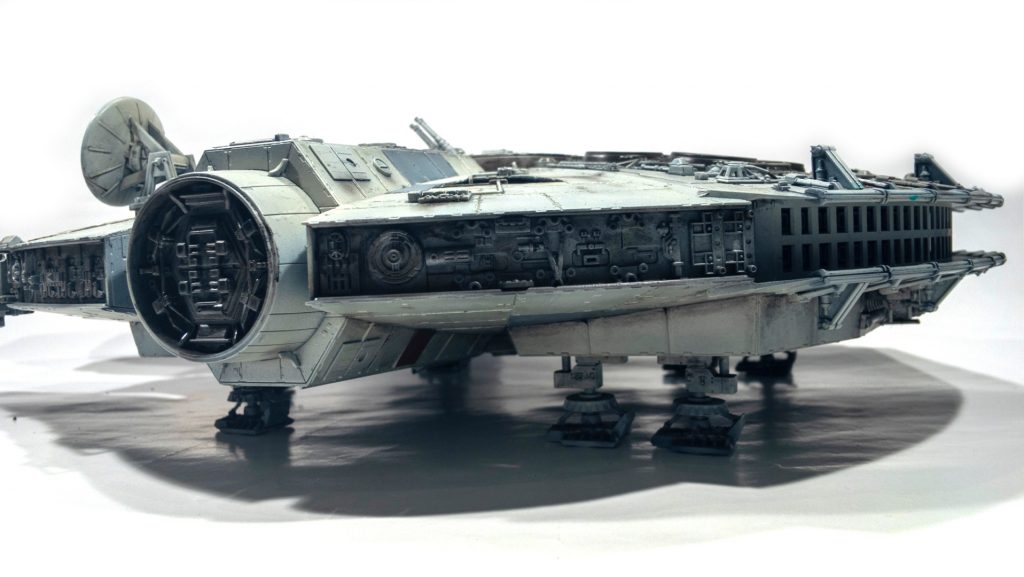 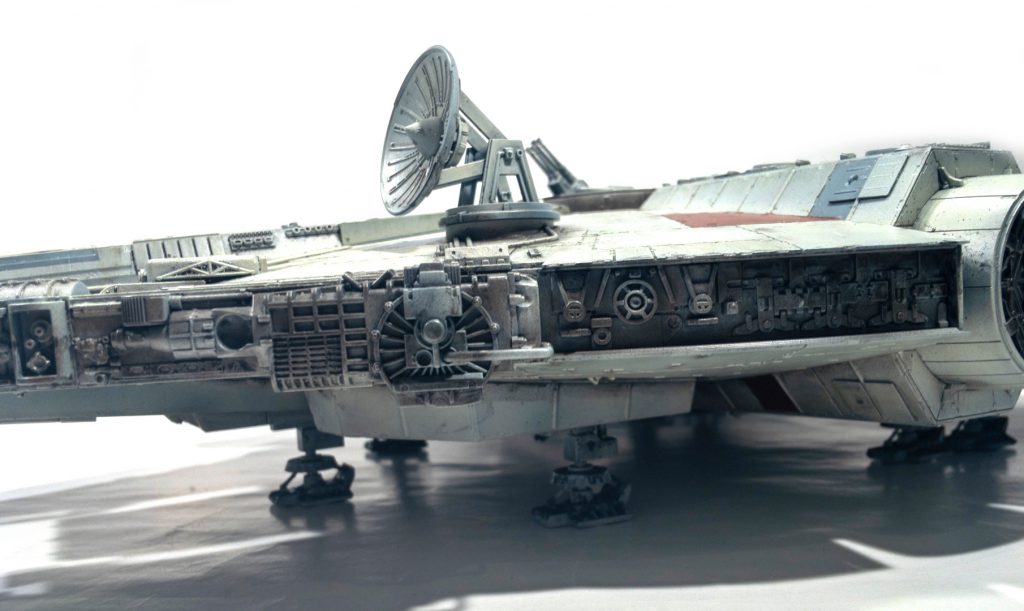 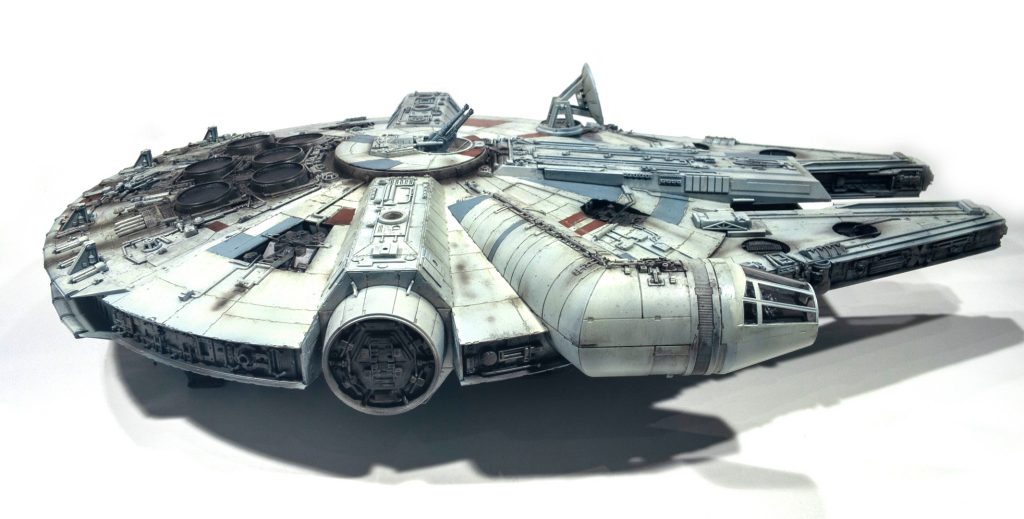 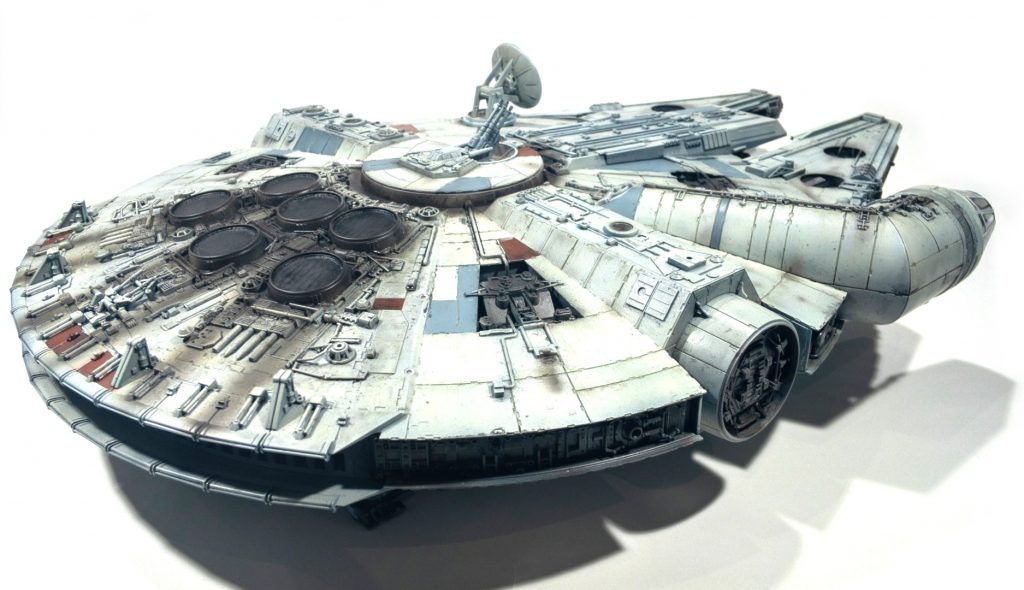 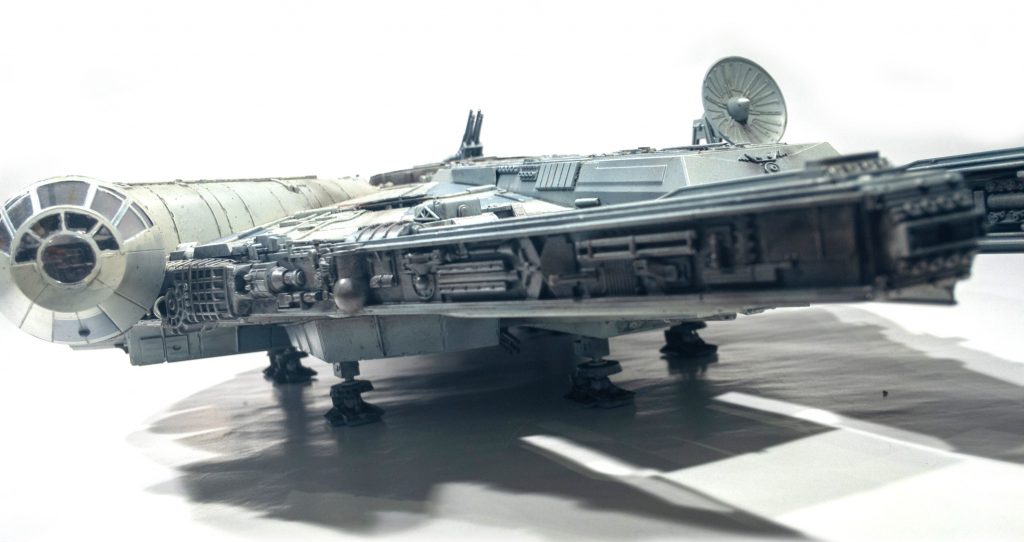 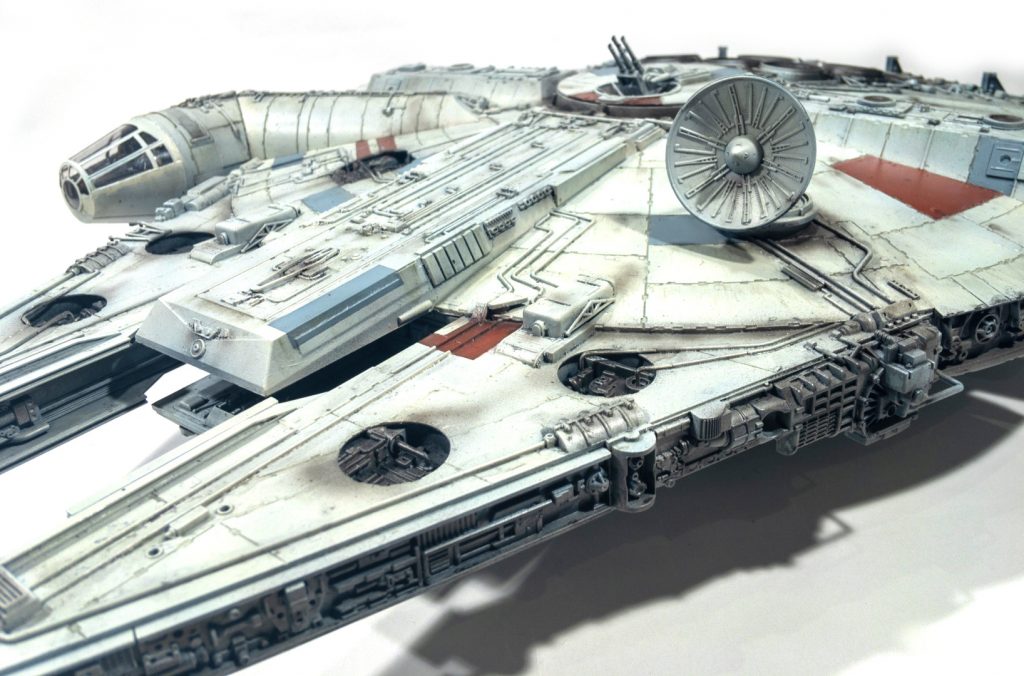 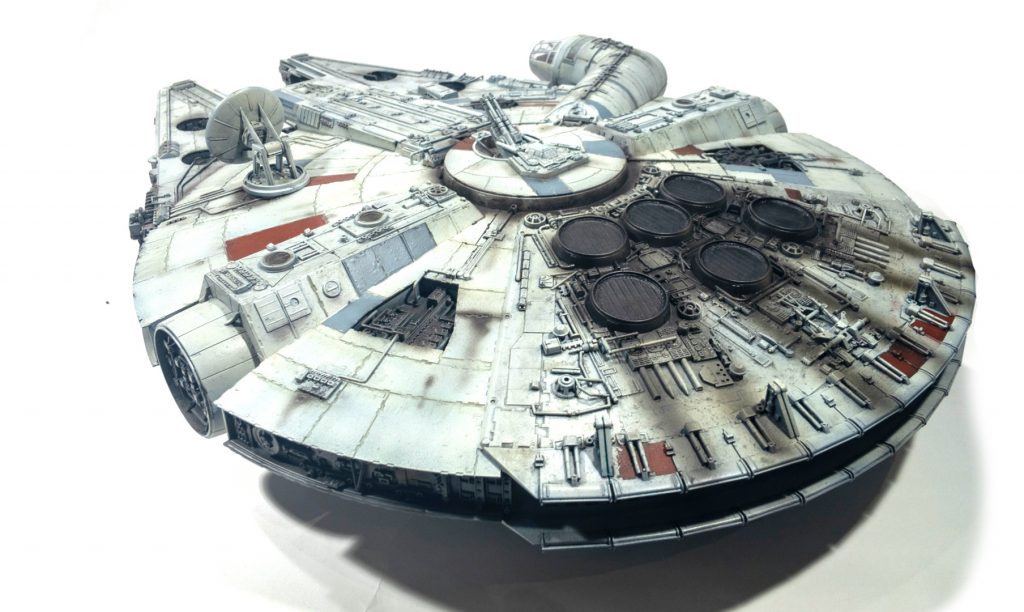 Next article So many kits