It has been interesting and instructive to look back on my past ten or so years of modelling, but there’s little point if we can’t learn anything from it.  I need to learn something, because at this point I feel like I am just circling, unable to improve.  I have successfully reached a stage where I can easily build models to a decent quality, often with a nice finish, but I know that I am a long way from the quality of the guys I really look up to.

One thing that really struck me was how I was trying to stretch the boundaries of what my tools could do from quite early on.  I had a lot of the right ideas, but lacked the appropriate tools to make them effective.  This suggests I have a decent intuition of how realism might look, and how to approach questions of weathering models, but lack the artistic and technical knowledge to make them effective techniques. 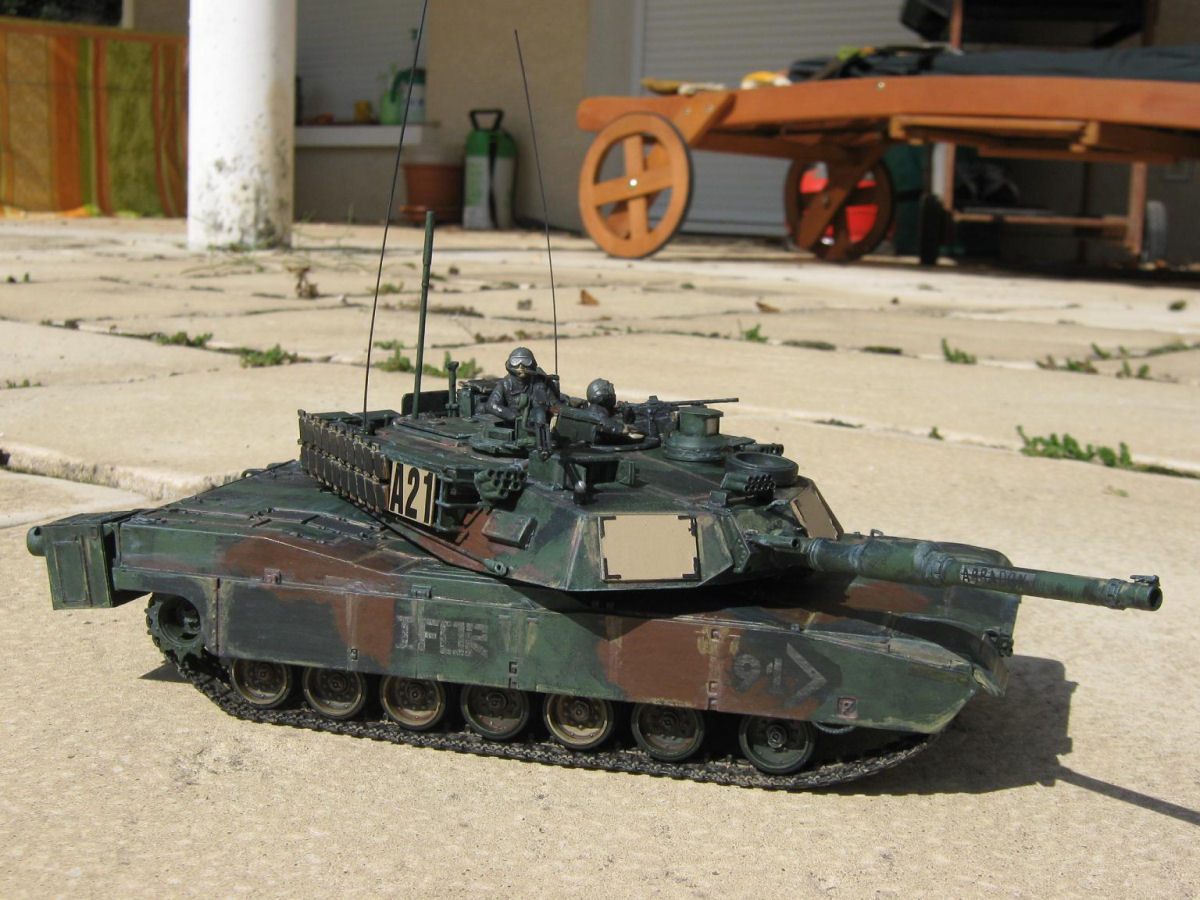 Heavy handed effects are a problem

Throughout this time, I have been trying to recreate the look of an aircraft that has been used and weathered.  In general, I have focused on the dirt that builds up, and more recently paint that has been removed.  Throughout, I have done very little with changing character of a surface: corrosion or fading.  Likewise, my effects have generally suffered for being too heavy-handed, or not present: I have tended to do all or nothing, with little sense of what I am trying to achieve or how it might be done.  That’s probably why my tanks have tended to look good and feel easy, since they seem able to take more heavy-handed effects, and this might be why the subtler look I went for on the King Tiger was less effective. 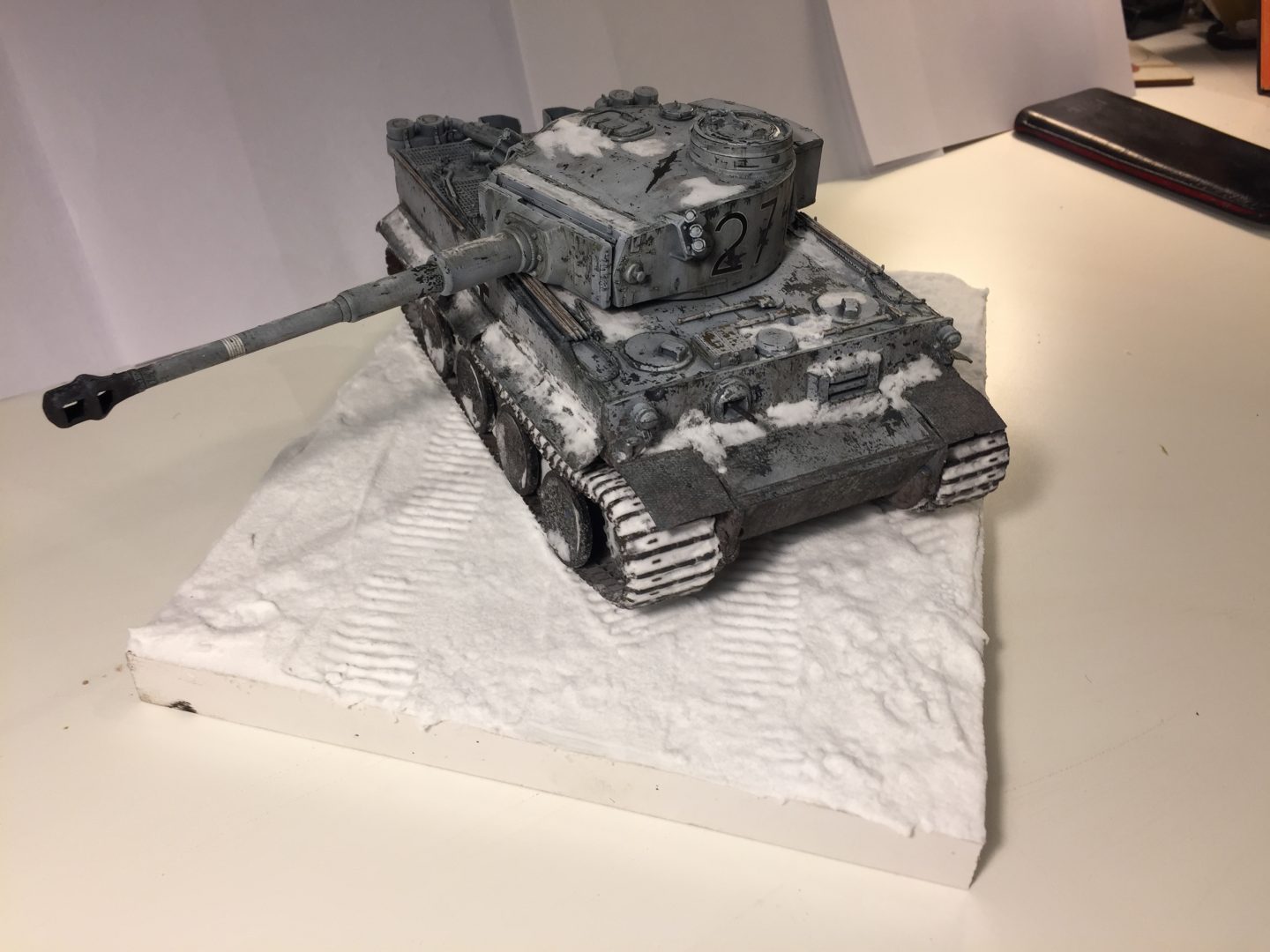 Although I have been using black primer for many years, I have rarely taken the next step and varied the underlying colours.  When I have, the results have tended to be underwhelming, but I hadn’t really thought about why until now.  It’s because of my heavy-handed weathering on top of the paint.  This is obvious in hindsight: the first attempts at it were the Comanche and the first painting of the Millenium Falcon.  Both of those were swamped by subsequent weathering, as I first explored oils.  Then on the Corsair, the subtle paint I attempted was hidden under the subsequent use of white oils to simulate dust.  Also, I have generally felt I had to cover the whole surface in later weathering precisely because it would be heavy-handed.  Otherwise there would be a “weathered” and “unweathered” area.  I have been trapped by my own lack of subtlety.  I used it on both the MiG-3 and the Mosquito: on the MiG, great success, it gave the white some character; on the Mosquito, guess what, my insistence on trying to use oils to shift the top coat’s tone buried it. 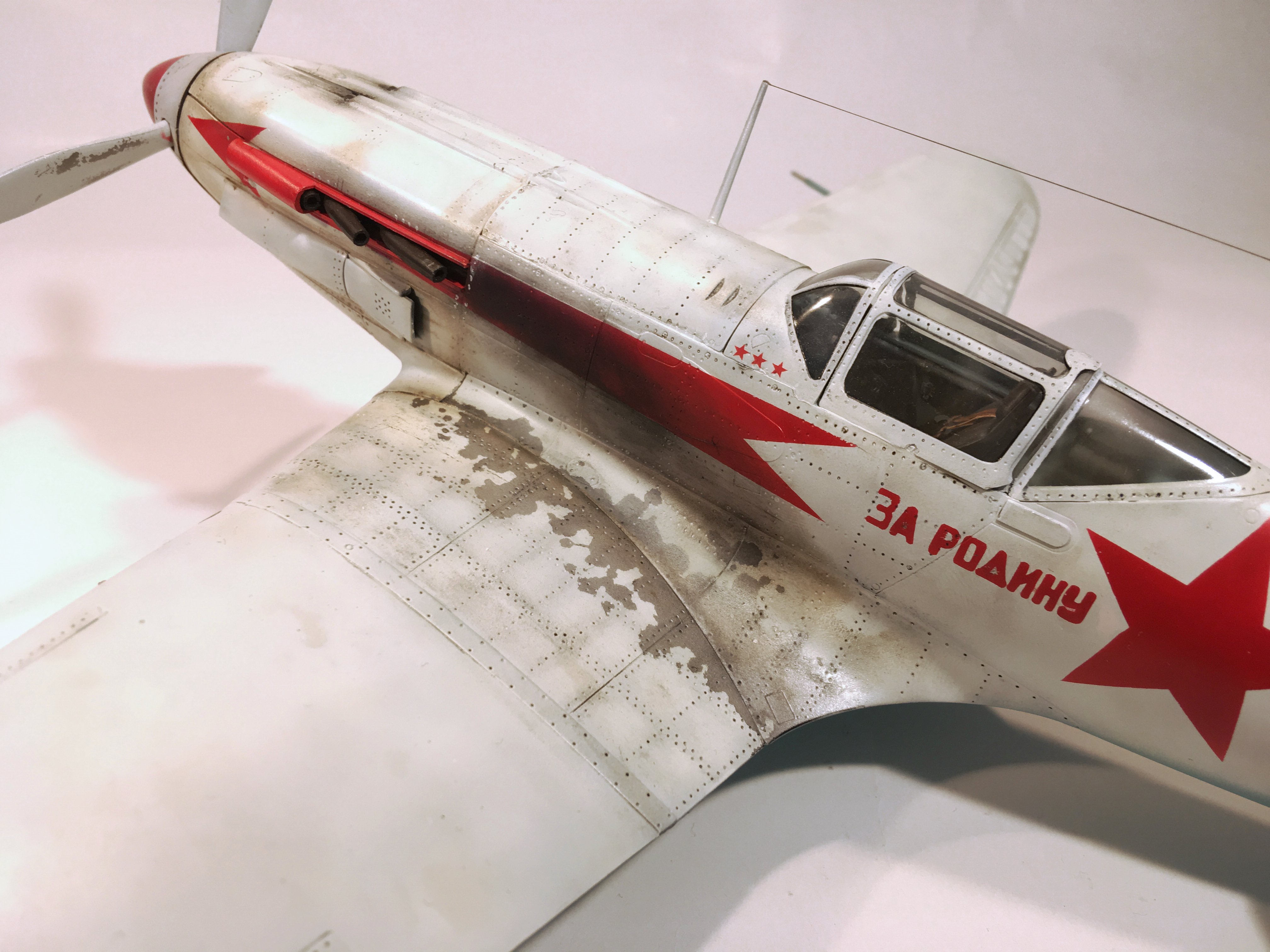 That’s why the Israeli Mirage is very interesting.  Because that one became a testbed, I tried out some different techniques and one was putting different colours under the paint.  Now, it would be wrong to say that was hugely successful.  There’s a reason I haven’t used the technique again since, and it’s because those colours were too stark and actually showed through the top coat.  We don’t want that.  But I resisted the urge to put anything on top of some of those effects and it is really interesting seeing how dramatic they are – in fact, so stark that I put loose pigment over the top to tone it down.  That was not the way forward: it was heavy handed, again.  So now I’m wondering whether doing something subtle under that quite uniform grey on the MiG-31, some mid greys, maybe low-saturation greens and blues, would have given it a bit more interest. 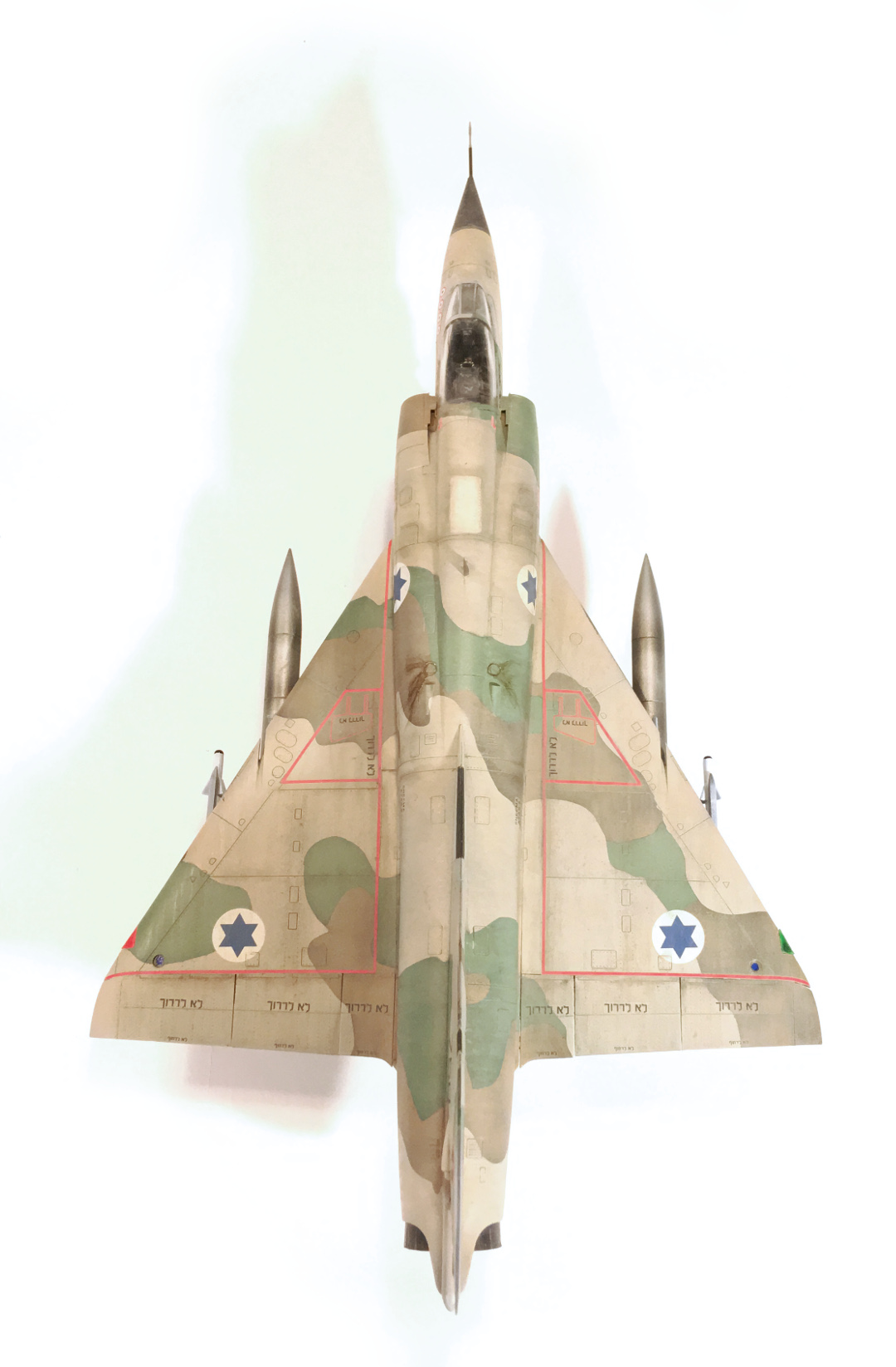 Part of the problem is that I have been treating modelling as a process.  Actually, I’ve been doing this since I was about 5 when I first built models with my dad.  The process then was:

Whereas more recently I’ve been thinking more along the lines of:

Of course, what’s happening here is straightforward: I’ve taken the process, adjusted it to fit ‘how I want to build’, and added complexity.  “But look how many techniques I’m using!  Look how complex it is!  So technically accomplished!  Obviously this is better!”  Except that’s not actually the case, because “better” would be “does a better job of looking right”, not “more complicated”.  It’s why the Viggen works. 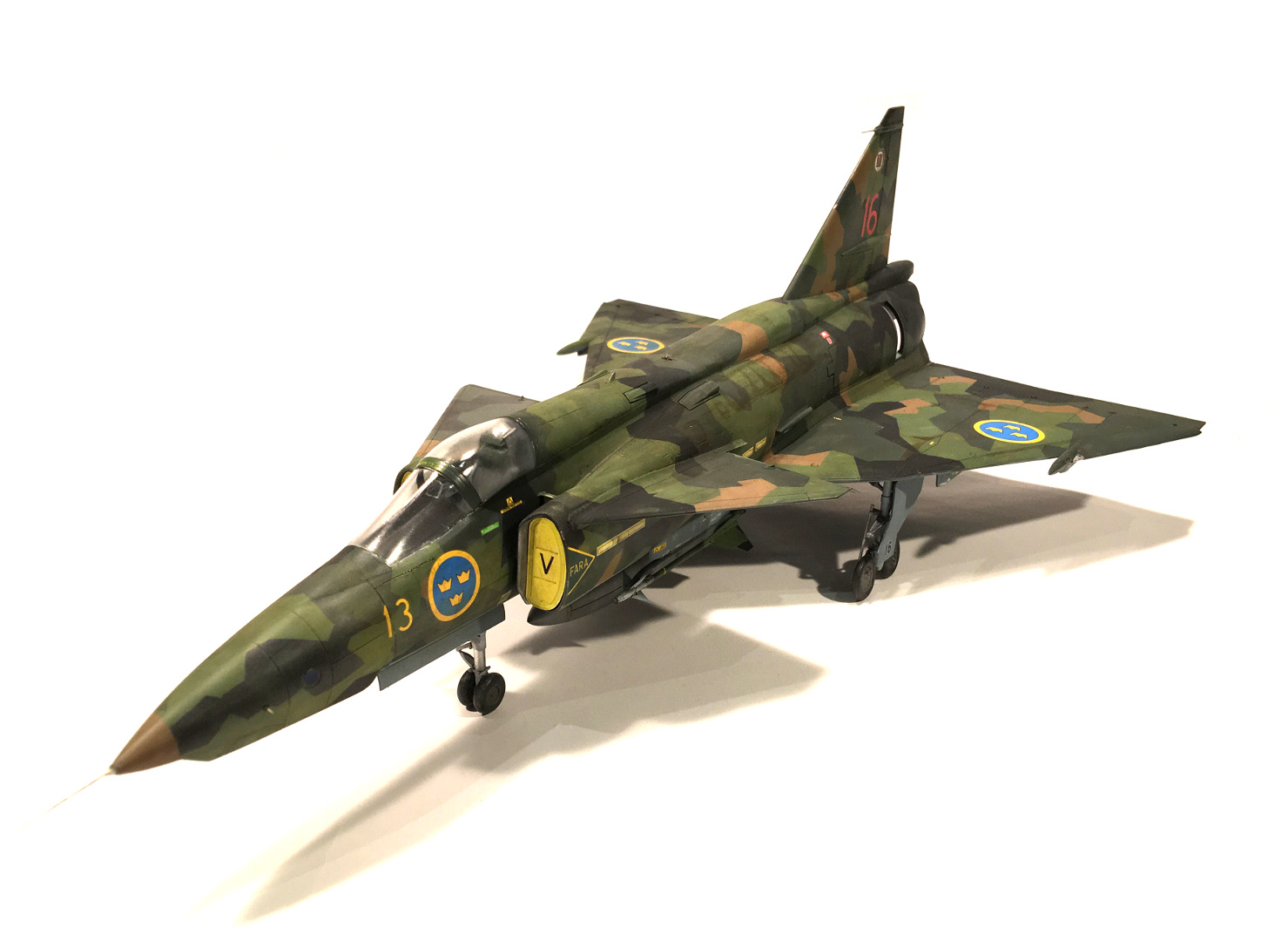 Granted, there has to be some kind of process.  Some things have to happen before other things, and that’s why I follow the process above: it works and seems to reduce conflict between techniques.  The fallacy is thinking that just because I know all these things, that I have to use all of them, all the time, everywhere.  Because the alternative is not having any weathering.

While this sounds easy (how hard can it be to leave out a technique?) I think it’s actually very hard in practice.  A reason we like to use a lot of techniques is because they are a comfort blanket: between all of these, it must look realistic, right?  But I don’t think that’s actually the case.  It’s surely better to find which techniques will actually make a difference in each situation and apply those with confidence and purpose.

I made a comment recently about how I had finished the paint scheme and could move on to weathering.  Will Pattison of the lovely Spitfire above remarked along the lines of “you’re thinking about this wrong, you need to start weathering as soon as you start painting”.  Now, I had just mean that I got to use weathering products, but the more I think about this, it’s clear that he’s right.  I haven’t really been thinking about weathering until I actually have oil paint on the end of my brush, in many cases.  If then.  Now, if you look at my process above, that means there was an awful lot of work happening where I really wasn’t thinking about weathering at all.  Look at that MiG-31: it was going to be a clean plane until I started doing oil streaks and realised they looked good.  Change of plans, dig out the dirty references, and away.

Seat of your pants modelling

Is that the difference between the builds that look great and the ones that fall short?  Sometimes I get to the right technique, open the right reference and put in the few brushstrokes that actually make the difference, all by mistake?  The awkward truth is that I tend to be pretty good at abandoning the plan and working quite spontaneously.

I used to have this problem in archery, a sport that is all about repetition: I would get to a competition, spend the practice arrows working out a technique that felt right today, and shoot like that until it didn’t feel right any more, then do something else.  Sometimes I would start doing something completely new and different in the middle of finals, because it felt better.  This is of course after spending every night at the range, doing thousands of practice shots very carefully and correctly.

In modelling, it tends to be either that I get a sudden inspiration while working, or because I made a mistake and am trying to correct or cover it.  Like the F-14: that really quite nice (albeit for the later schemes) effect was the result of messing up a panel wash.

In both cases, the better we understand what we’re doing, and why, the better our chances that the “oh no I must do something different” will be constructive, purposeful and effective, not just random flailing.  In archery, it was usually that because I was aiming harder in competition, I needed to put more emphasis on how I was pulling through in order to keep my timing working.  In modelling, it has to be the same.  If you’re thinking a colour has to stand out, or tone down, then having a clear range of options will reduce the chance of overdoing it.

I need to start thinking of weathering from the beginning, to first sit down with my references and some Chopin, or Mozart, or Motorhead, and pick a couple of references that show the various angles.  Then start writing what I’m seeing, how different elements might be recreated, and save those references so they are easily retrieved.  Since I work best once I have had inspiration with a particular technique, if I’m not feeling that inspiration, maybe I should just put that kit away and build something else, no matter how popular that one is.

Which brings us to…

Not building for myself

Over the last year or so, I’ve sometimes felt less engaged in my modelling.  Not that I don’t enjoy it, but it’s as if I’ve just wanted to get each build done and off the desk so I can start the next one.  That makes me think that I haven’t really been enjoying what I’ve been building.

This makes sense, because I’ve built a lot of kits that were very hard work, and others where, if you look back at the previous post, I say “I didn’t have a strong idea of how I wanted this to look”.  Now, the first build I ever felt that way about was the Bf 109, and yet it’s become very common in 2019.  It can’t just be that I need a stronger artistic vision because my skills have improved.  That’s actually ridiculous, because I had plenty of vision for my older builds, I just lacked the skills to achieve that vision.

I think it’s because I’m building for other people.

Don’t get the wrong idea, it’s not that other people are telling me what or how to build, or that my integrity is being compromised.  Rather, I found I loved the validation I got from group builds: seeing my subject choices compared to others’, receiving praise for a nice build,   Though I haven’t tended to get into many modelling competitions, I do have a bit of a competitive streak and I might not have finished a few of this year’s builds had it not been for that element.  Because all the awful builds were for group builds.

Even where the group build doesn’t involve a terrible kit (like the Tamiya Spitfires, which were delightful), I wonder whether working to someone else’s rules and timeframes isn’t the best thing for me.  Yes, I get the feeling of validation, yes it helps me keep score for my improvement, but ultimately it might be best to pick and choose the group builds that I really want to do, and not let them overwhelm me.

Earlier today, I sat down with some coffee and my list of owned kits, and started starring them against three criteria: do I have a strong vision of how I want this to look; do I have all the bits I would need to start it; and do I feel a strong desire to build it.  The results were interesting: out of too many kits that I have (a story for another day), I had a vision for about half, for half of which I had everything I needed, and I had a real desire to build only half of those.   Which is great, because it means I start 2020 with a clear idea of what I’m going to build first.  Of course my desires will change as we go, but this method seemed really effective. 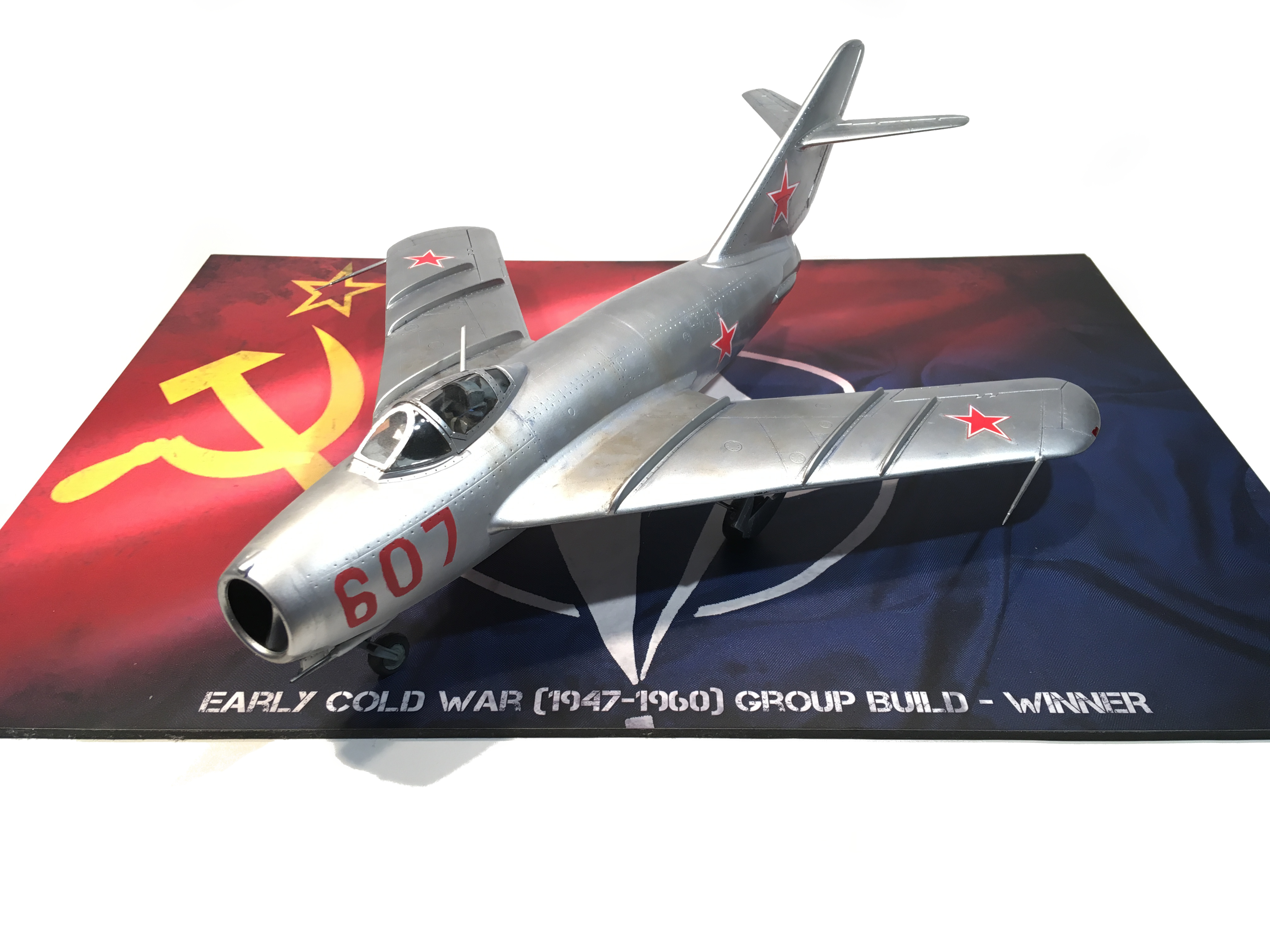 What to work on

I think the musings above lead to some simple, actionable things that might just be relevant for all of us.

That was very insightful, thank you. Just a new guy who’s been doing it for not even 2 years.