A delightful little kit: if you fancy a 1/48 Bf 109 you can’t go wrong with this one.  Wide range of colourful schemes, plenty of detail, but also a simple and quick build. 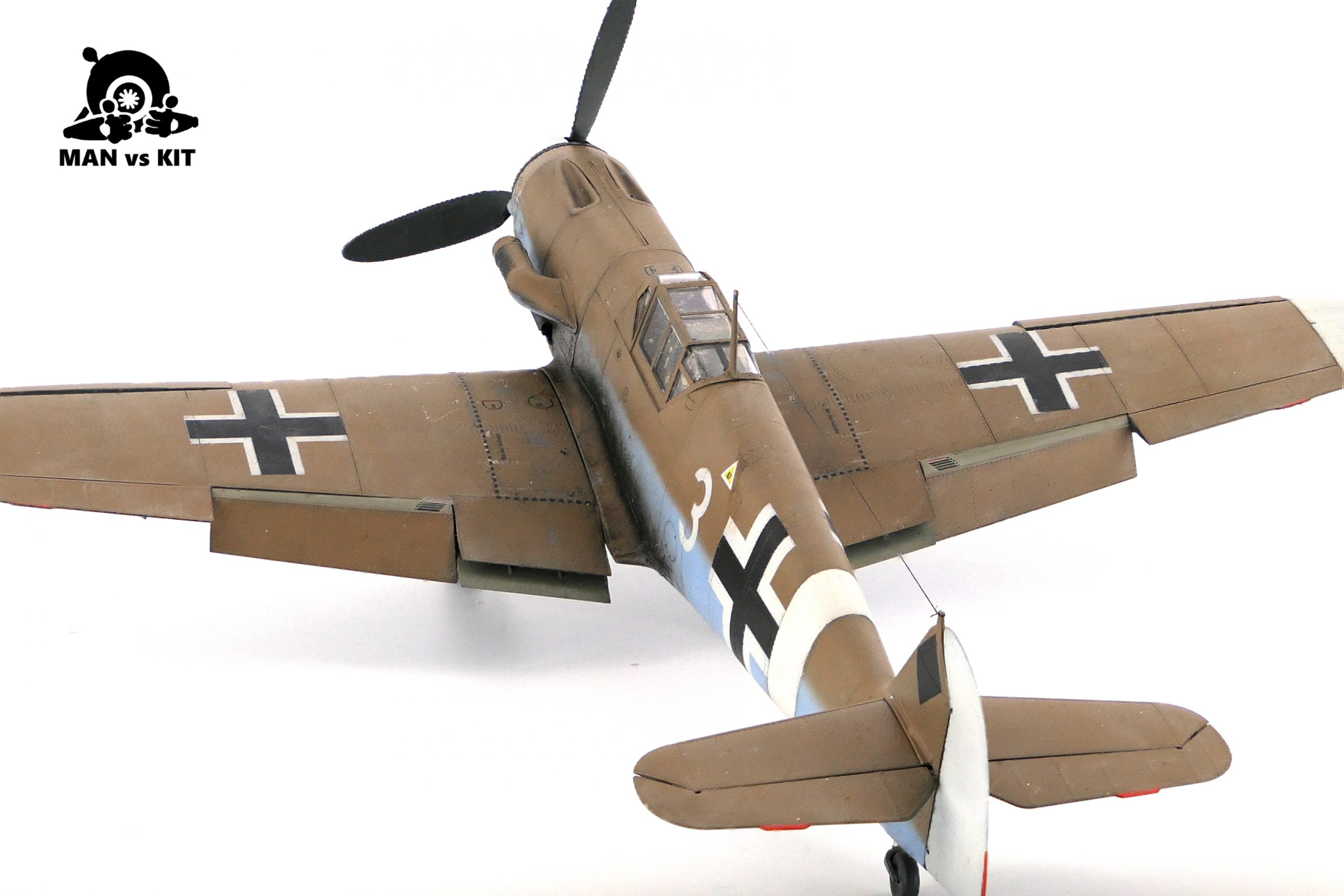 You may remember from previous entries that I’ve always had a love-hate relationship with Eduard.  I love that you can always depend on them to provide a detailed, accurate kit.  Actually their level of detail and accuracy goes through “obsessive” and approaches “disturbing”. 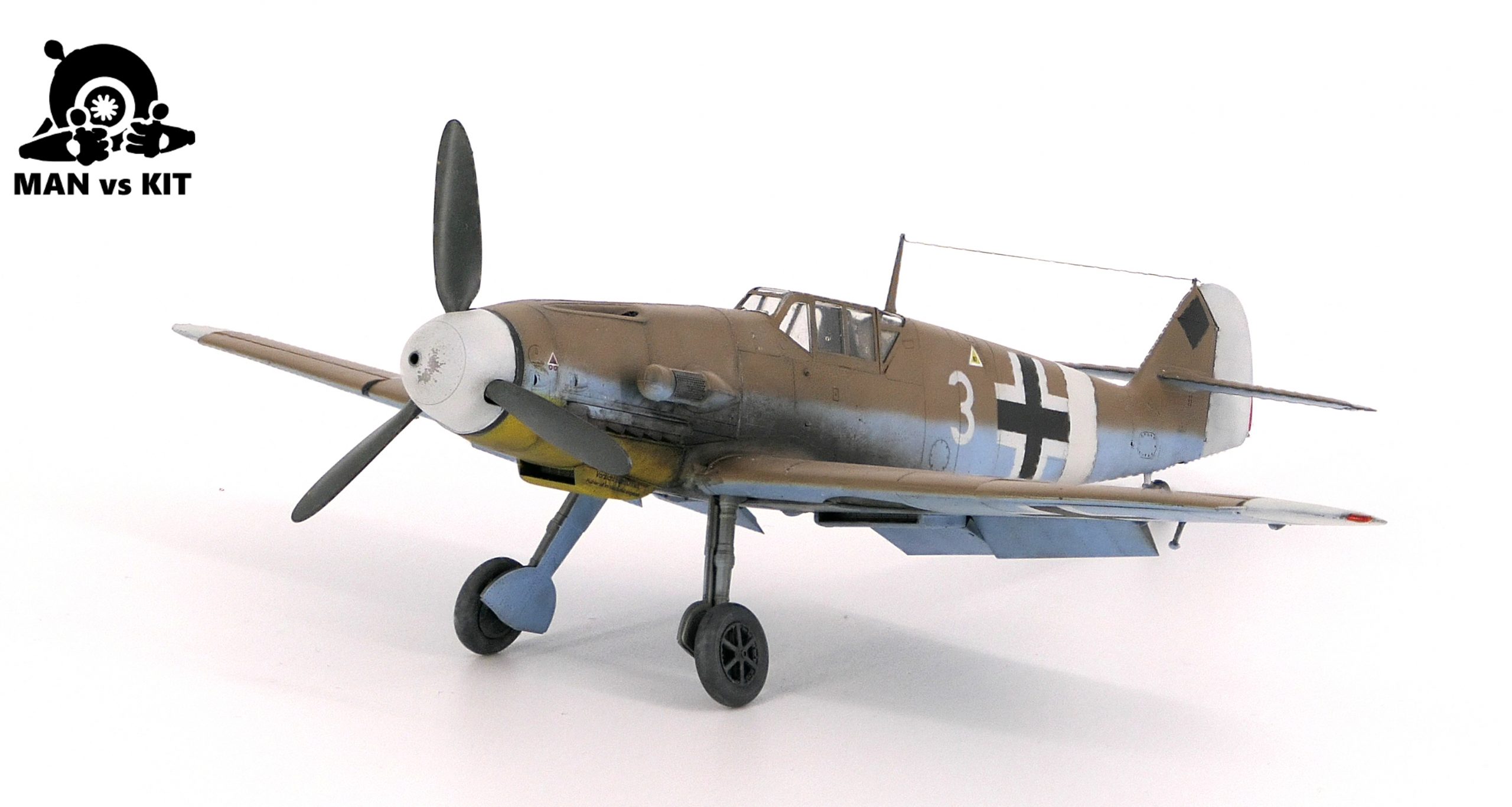 Unfortunately, their kits are extremely hit and miss when it comes to engineering, which is to say how far the design promotes them going together properly.  I really annoyed some people recently by saying that Eduard is like a competent version of Kitty Hawk in that regard, but if anything I think that comment is more insulting to KH because insane as their kits can be, I’ve never had one that made me think “yeah, this isn’t going to work”.  Unfortunately, I have, repeatedly, had that experience with Eduard.  Their old 1/48 Fw 190, a few of their reboxed kits (good grief that MiG-29 was horrible) and especially the Brassin weapons sets have just turned out so complicated that I couldn’t get them to do what I wanted.  You can say that just means I’m not a good modeller all you like: I’m going to keep recommending things I enjoy rather than things that I wasted money on.

This kit is one of the excellent ones.

It was the new release of their 2016 tooling, and as far as I can tell is basically identical to the previous release of the G-2, with just a new instruction booklet and decals, though the schemes are nearly identical.  There is quite a nice selection that covers the use of this early G from North Africa / Sicily, the Russian Front and even one used in Finland.

The typical Eduard accuracy is shown by the multiple canopy options (including a couple which I couldn’t tell apart but that’s what I mean by the company’s almost scary devotion to accuracy) and different inserts for the landing gear wells.  The different options here apparently cover various differences between some F variants and early Gs, with the most obvious being the shift to the later canopy with less framing.  The big difference between variants which even the uninitiated like me can identify is the cowling bulge that arrived when the G-6 switched to larger 13mm machine guns, but that is for a different kit. 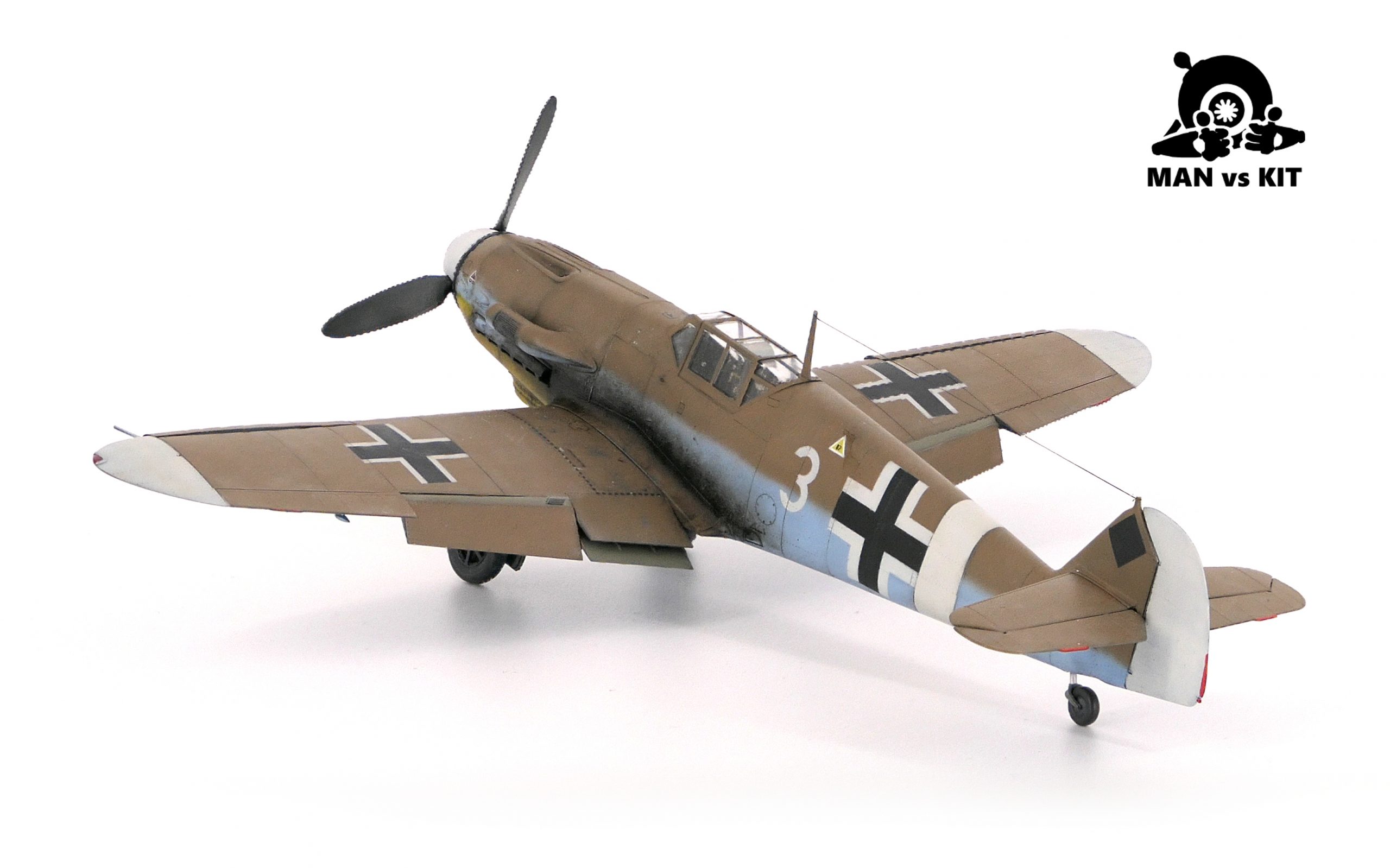 Detail is really nice throughout without ever getting in the way of construction.  I never had the feeling that anything was more difficult than it had to be in order to accommodate something that wouldn’t be seen or felt that the designers had prioritised a complicated setup over a simple one.

The kit went together very easily and was a delight to build.  I was actually taken aback by how quickly it built: you do the cockpit details, which are quite involved in places, close it up and the fuselage halves fit well so you move on to the wings.  The wings go together with minimal fuss so you attach them, and the tailplanes, and… you’re done.  The landing gear slot into place, the prop just squeezes on when you’re done painting. 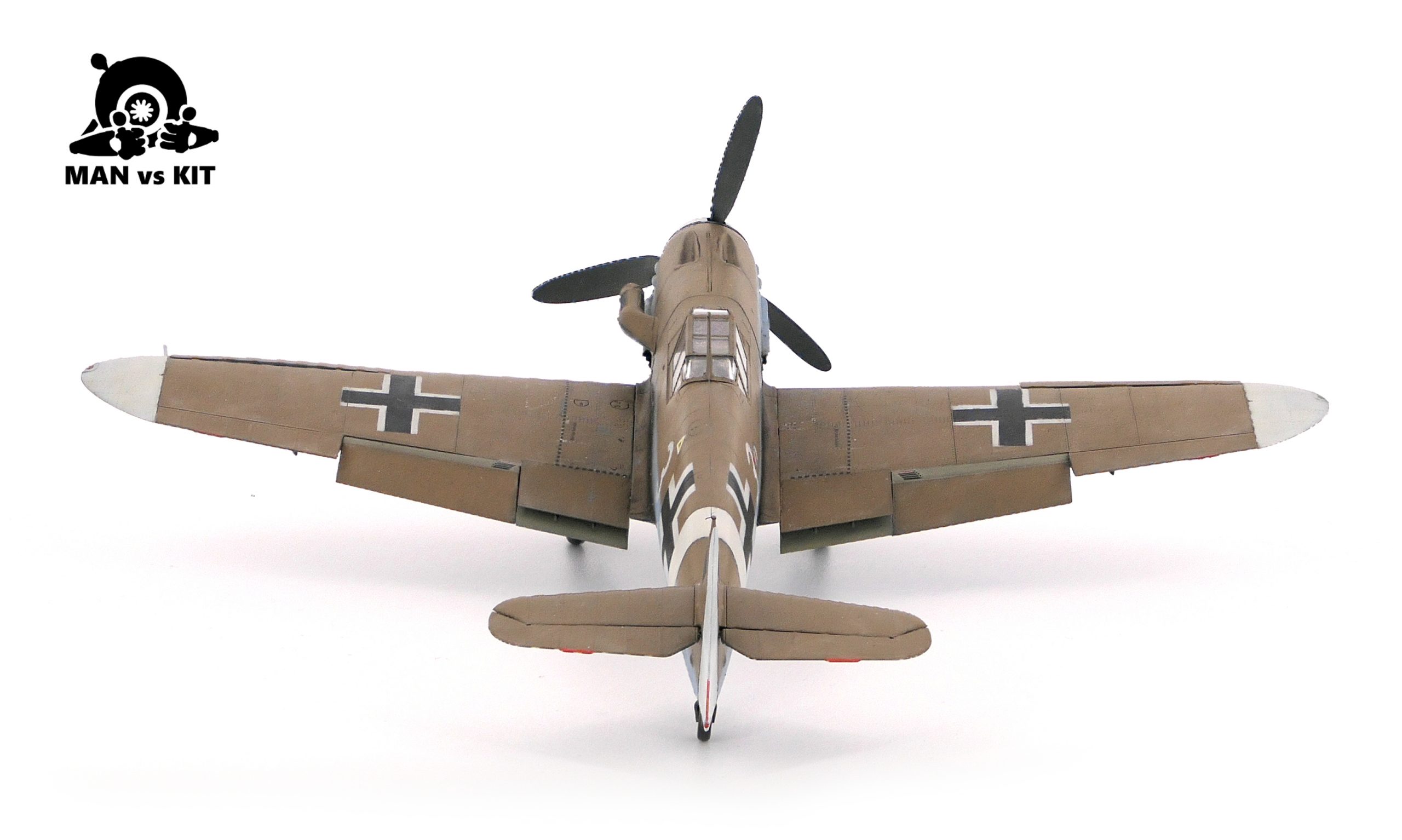 It’s just a delightful little kit and if you fancy a 1/48 Bf 109 you can’t go wrong with this one.  Plenty of detail if you want to go crazy, but also a simple and quick build.

This year I’ve seen comments that Eduard has introduced a new type of decal that is more of a wet transfer, in that the carrier film can be peeled off to leave the colour behind.  These have apparently been causing a lot of trouble, not going on neatly or reacting strangely to setting solutions.  Although I sprayed most of the markings on this model, I used the kit decals for a bunch of stencils and fuel indicators.  As far as I could tell, they worked just fine and like any other decals, though they were maybe a little thinner and on the fragile side.  I didn’t try peeling off the carrier film because they set nicely with Solvaset and I didn’t want to tempt fate.   On the other hand I have heard that the new decals are very thick and stiff, being compared to the often-complained-about Tamiya ones, and I don’t think that matches what I found here so maybe these were not the new type.  Definitely something to keep an eye on. 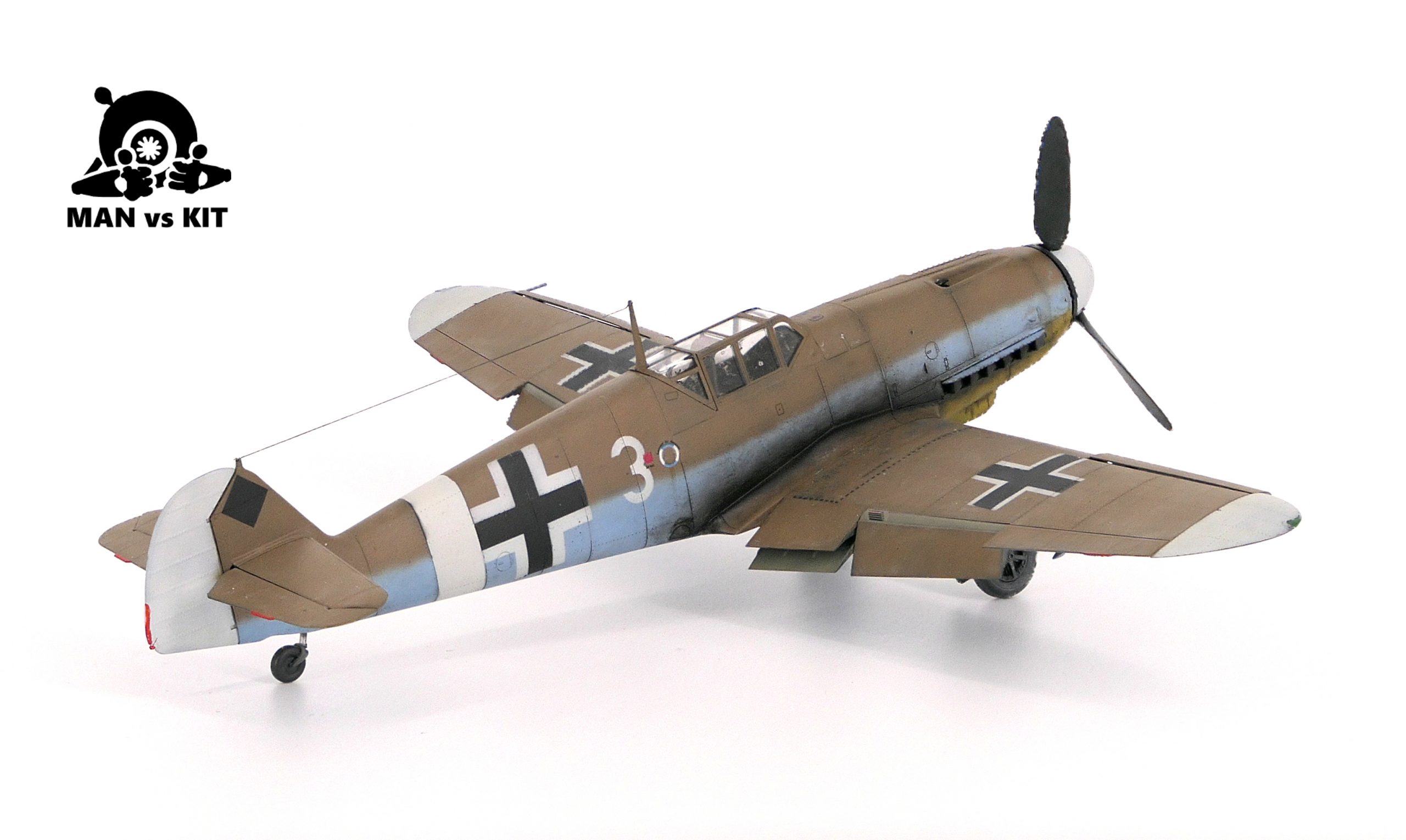 Despite this kit going together beautifully, I nonetheless managed to mess it up quite badly during painting.

I had wanted to do a tropical camo Bf 109 for some time and this seemed a good option.  I would also like to do one of the E models with the leopardesque dot camo but this one had a very attractive box scheme with fine green lines sprayed over the RLM 79.  I had a go at that but found I just hadn’t managed to do a good job of it: I didn’t manage to keep the lines a consistent thickness, and the ones that were thin enough just looked like they were airbrushed rather than sprayed on the real thing.  The distribution of the green lines didn’t seem right either.  Most annoying though was that the RLM 79 just didn’t seem to be quite right: it was a bit too yellow and I wonder whether there was a change in formulation at some point.  It looked like it would have been fine on an E but on the G it just didn’t seem right. 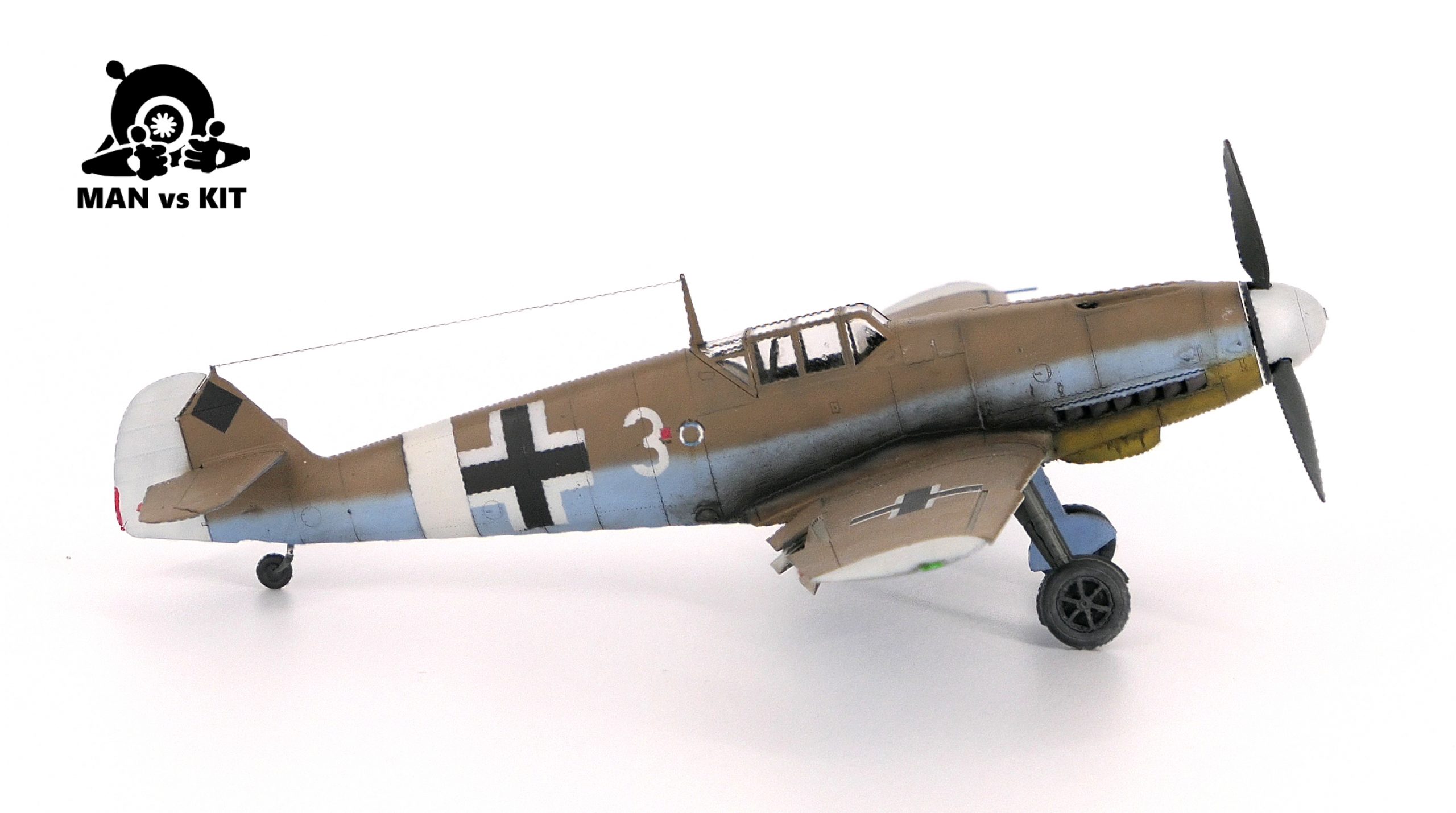 In the end I just decided to repaint it.  I was able to salvage the RLM 78 (which is that really nice bright blue) from the underneath, and actually extended the demarcation upwards to get more of that.  Rather than persisting with the green lines, I opted for a more basic scheme which I have always found looks really good on the Bf 109.  I had a few thoughts of colours to mix in to give it that slightly redder tint, but then found that my MRP Swedish Army Tan actually looked the part so I just used that instead. 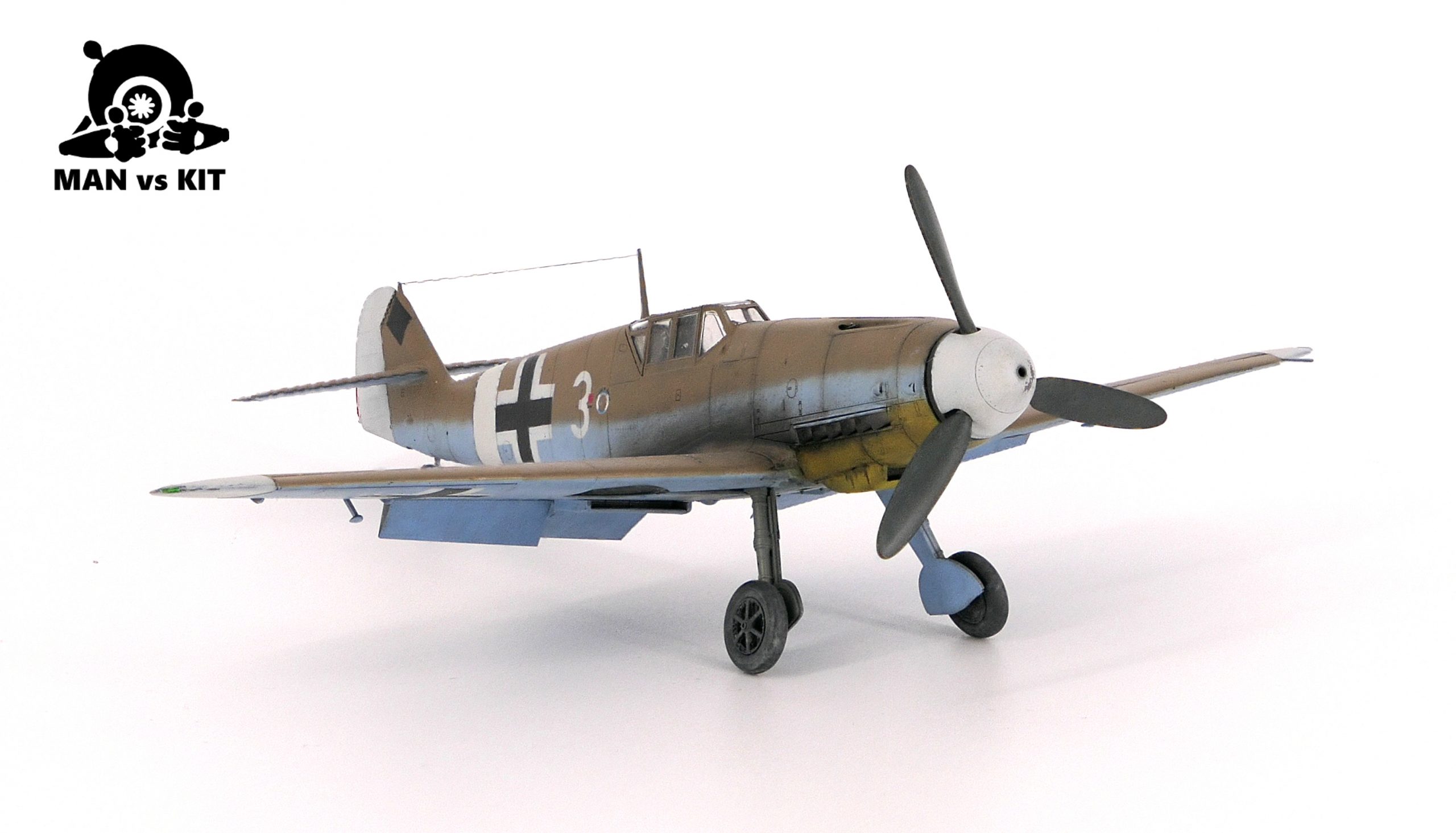 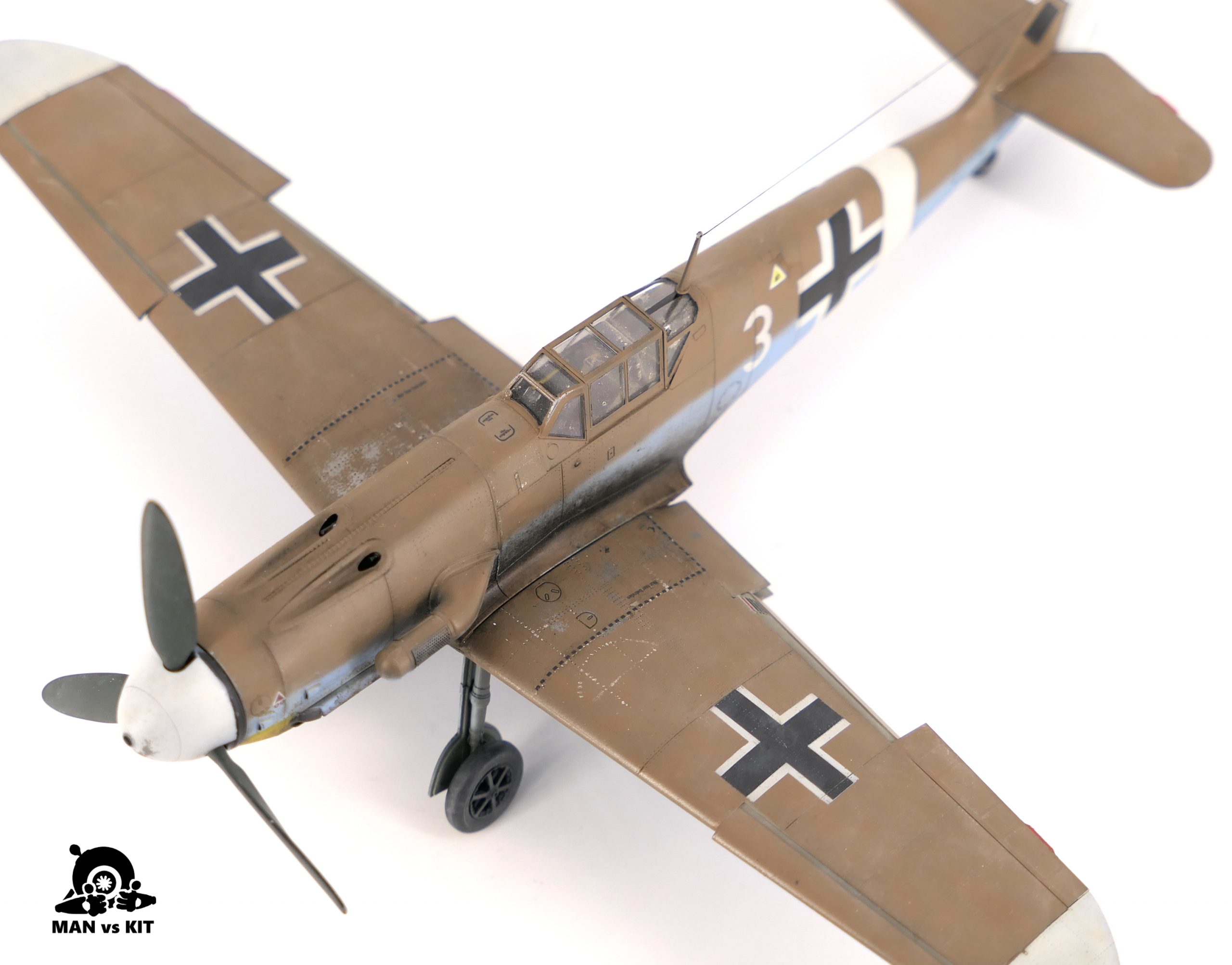 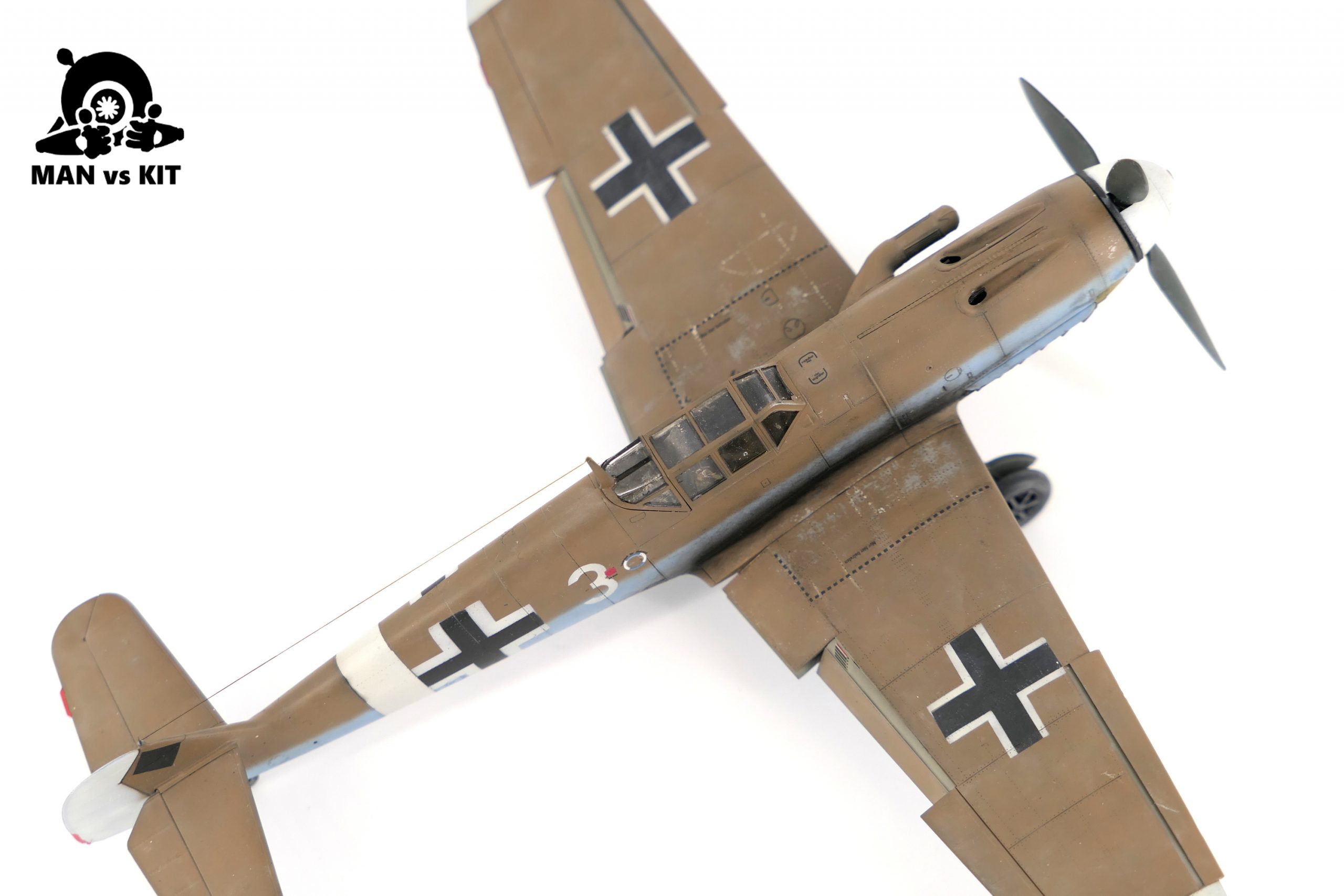 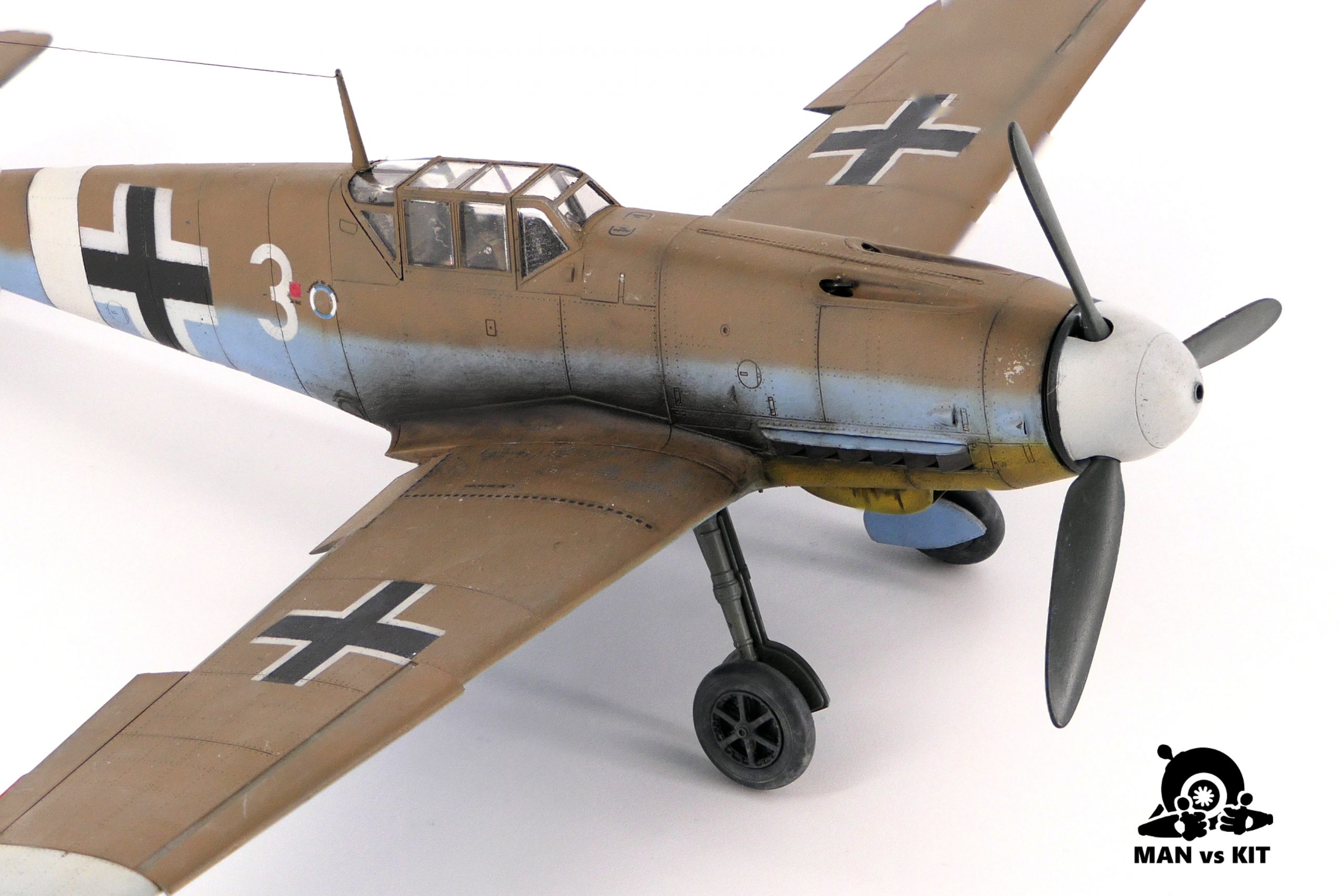 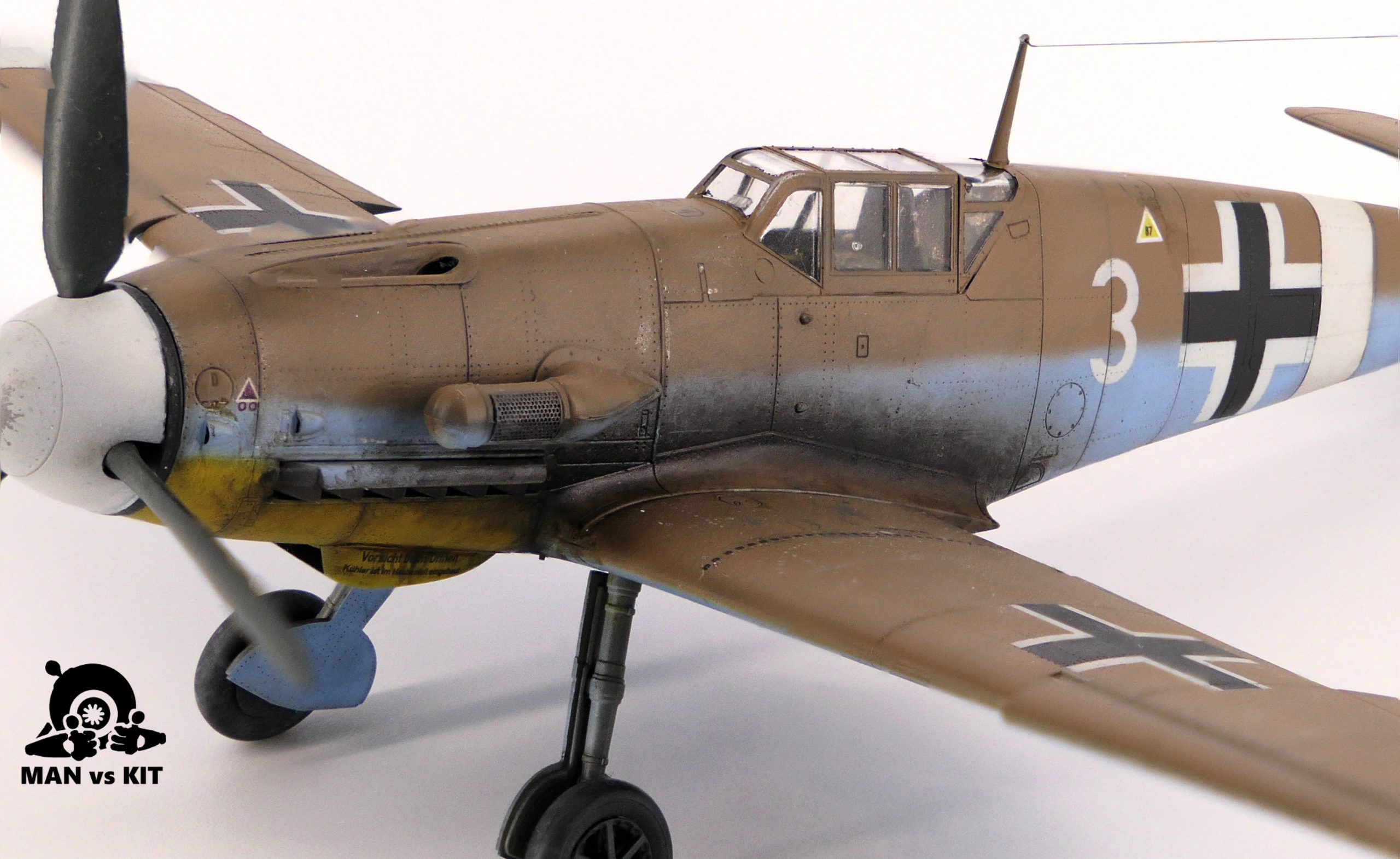