This was a very problematic build, though the finished model looks nice.  I screwed mine up, so you don’t have to.  It’s a public service I provide.

This is not one of Eduard’s recent kits: the first release dates from 2004, and this rebox dresses the original up with some colour photoetch for the cockpit and a few resin parts for the engine.  In fact you get a choice of two: either the original, which is represented by the kit engine with some new details; or the upgraded engine for which you cut the back off the plane and replace the whole unit with a new resin surround and exhaust. 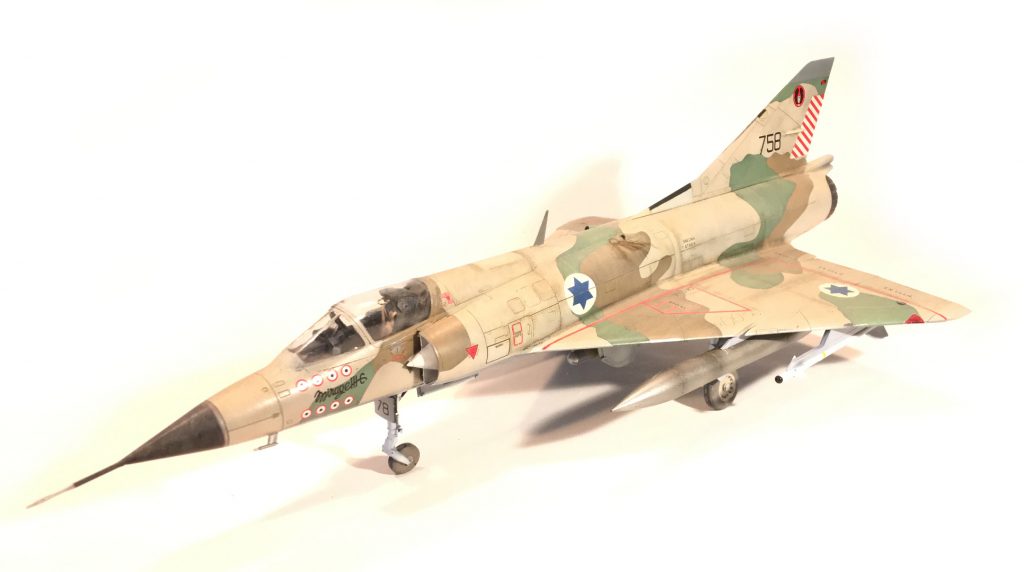 Both options look nice, and to what I’m sure is everyone’s amazement, yes I opted for the resin upgraded version, cut the kit apart and stuck the new bit in.  You may be interested to know that it is as close to a drop fit as is possible with resin, needing just a little bead of sprue goo to smooth the join.  Good job Eduard! 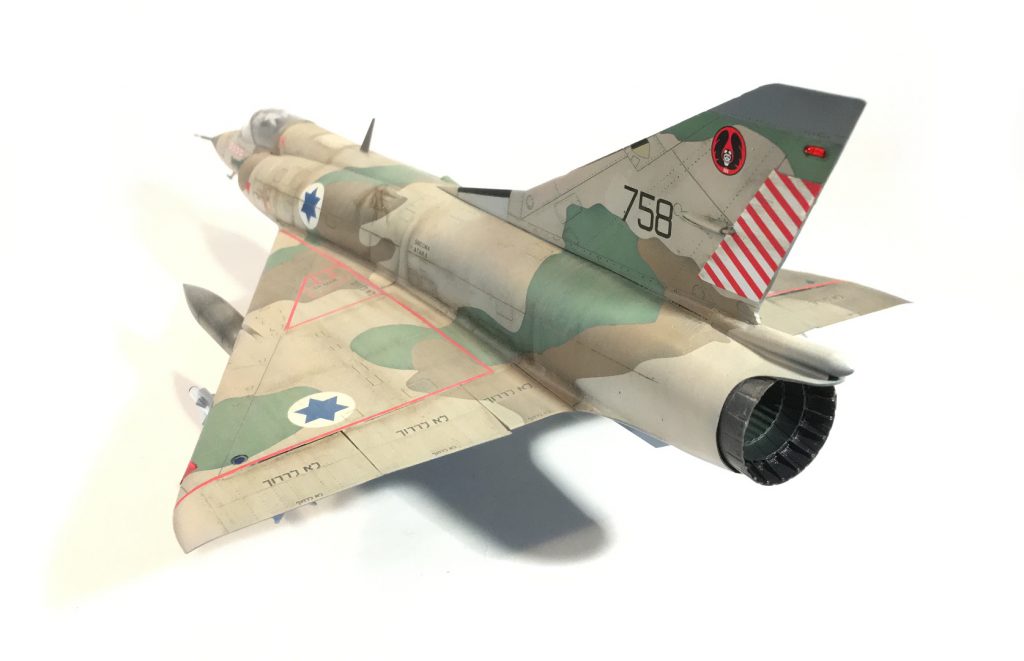 The kit offers a colourful range of Mirages in Israeli service from 1967 to 1980, from the early natural metal aircraft through the camouflaged ones (including one with the orange and black recognition triangles) to even an aircraft in the experimental Air Superiority Scheme shortly before its sale to Argentina.

Incidentally this is where the box title of “Shachak” comes from: it’s the Hebrew name given to the Mirage.  Though worth noting that the spelling is more typically transliterated into English as “Shahak” but “Shachak” is appropriate in Czech.  This stuff gets confusing.  Also, it seems that “Shahak” has been variously translated as “Sky”, “Skyblazer”, and “of the sky”.  My Hebrew is terrible so if you know, please do inform me and as always I’ll update the post and credit you.

UPDATE: Sean Middleton of Topnotch assures me the correct translation is indeed, “Sky.”  Further, the original is “שמיים” read right to left of course.  Thanks Sean!  While you’re here, check out his shop https://topnotch-success.net.  Not only does Sean sell a wide range of camo and insignia masks, he has also helped me out several times with odd or one-off masks.

Appropriate weapons are included for these, along with a handy “what goes where” chart.  These include AIM-9D, Matra 530 (with radar and IR heads), rocket pods and two styles of underwing tanks.  However, the missiles are pretty basic in shape and the rest of the aircraft is nice enough to justify some snazzy resin replacements, especially of the Sidewinders. 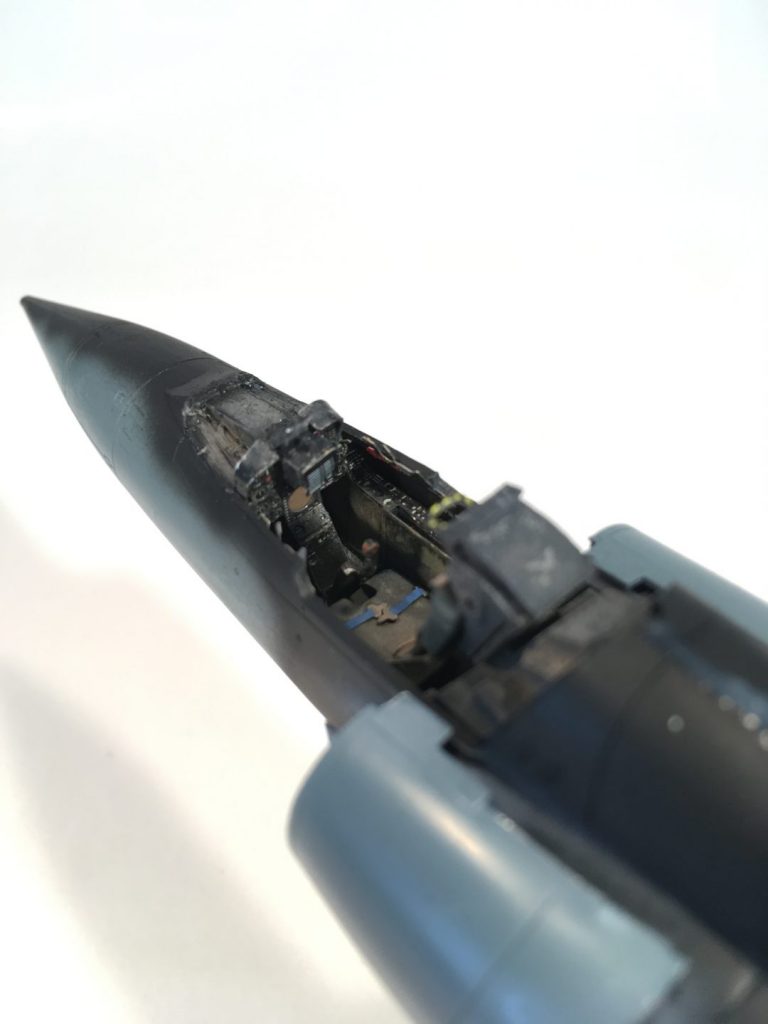 The enhanced cockpit looks good.  In 1/48 I think colour photoetch has a place if used judiciously and here it’s pretty tidy.  I used a few nice looking panels and they really dressed up a cockpit that you can’t see much detail of anyway.  However… that means it’s time to look at how this went together, starting with that same cockpit. 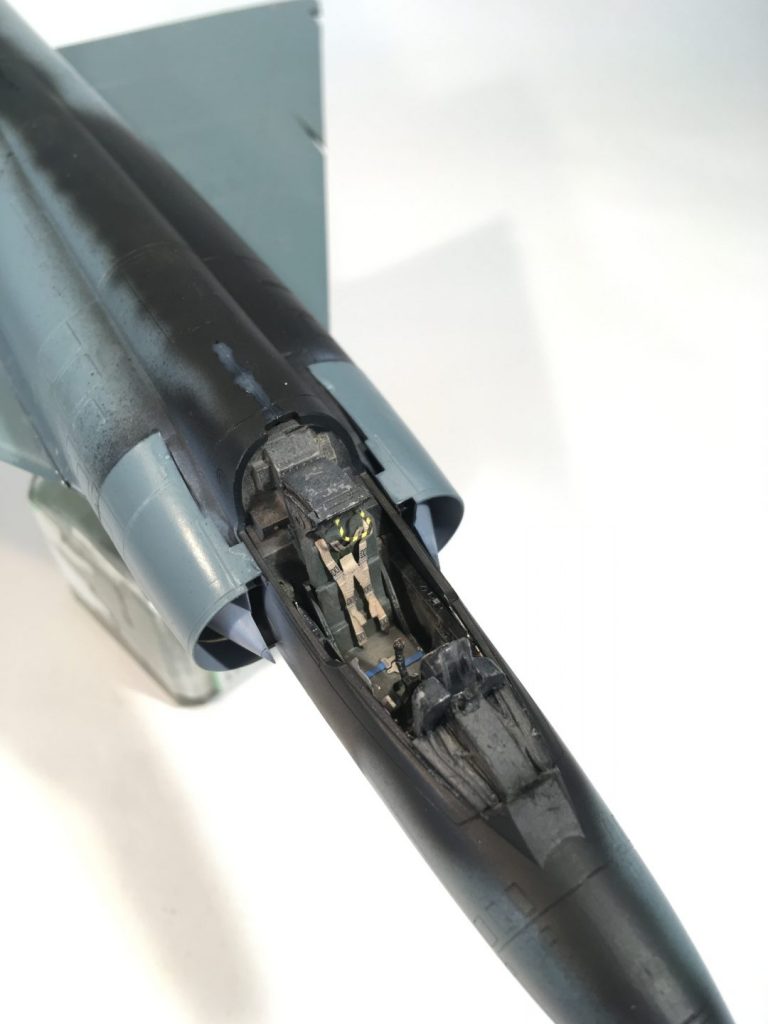 At this point you might be thinking that this all sounds great, and that you should get one of these.  Don’t let me put you off, because it is a nice little model when complete, but there are a few things you should be aware of before jumping in.  I screwed mine up, so you don’t have to.  It’s a public service I provide. 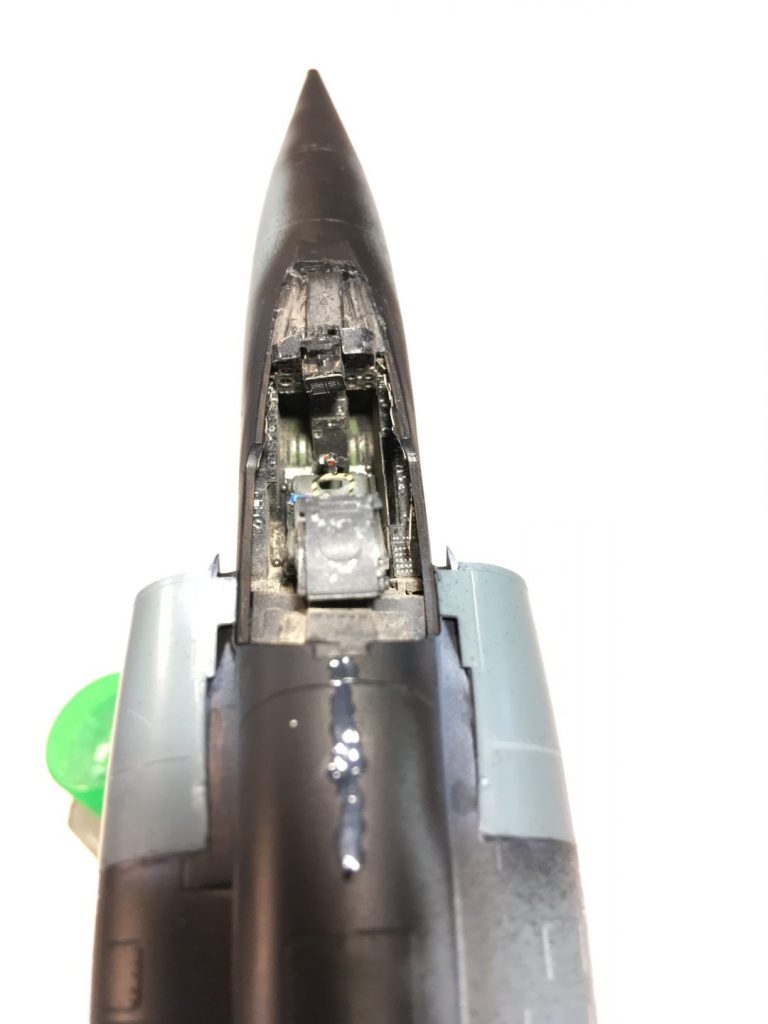 First, that cockpit.  I’m fairly sure I positioned everything how the instructions wanted and in the correct order, but found that the instrument panel wouldn’t sit in the cockpit at anything like the correct angle.  Upon inspection and comparing the parts, it seemed that the PE instrument panel has the typical “mushroom” shape but the plastic one lacks the sides.  I found that by carefully cutting off the sides it was possible to fit the panel, then reattach the sides so they sit slightly proud.

Closing the fuselage is the next bit of fun.  There is no positive locating for the cockpit and the attached nosewheel bay tells you not to glue it.  You have to do this weird fiddle, holding all three parts simultaneously as the fuselage closes, then try to stick everything once you can no longer get to it.  Good job Eduard.

Just a quick note, if you’re thinking of using a weight system like Liquid Gravity, mix it with PVA and apply before closing the fuselage.  The cockpit isn’t sealed, nor is the rear fuselage, so you’ll get tiny metal balls bouncing around inside the fuselage. 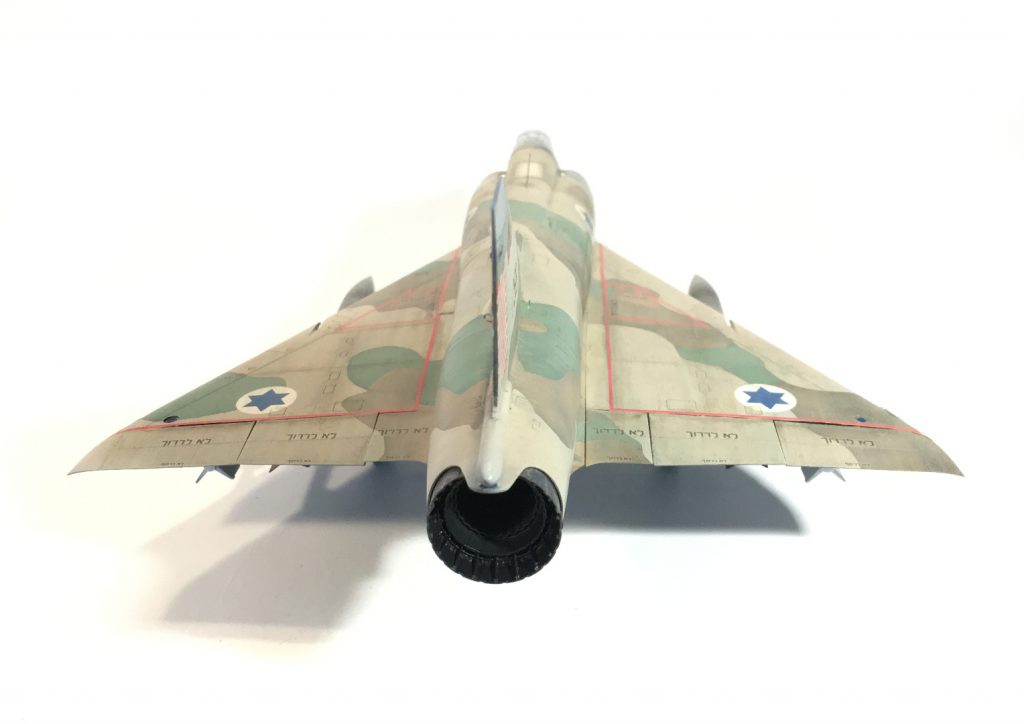 A small amount of sprue goo was needed to tidy up the fuselage seams, mostly around the nose.  Rather more was needed to smooth the join around the intakes, which are a bit clunky.  As you get to the detail parts, you will notice that the mould halves were misaligned, causing not just an easily removed ridge at the parting line, but a step.  This is a nuisance because there is now literally no way those parts will fit properly.  Every single part needs to not only be cleaned but trimmed and this is going to give seam problems.

What does give trouble is the forward canopy.  I had very carefully seated the rear canopy so it wouldn’t sit up and look out of place, but only once everything was in place did I notice that the forward canopy was sitting at least a millimetre proud of the nose, but only on one side.  This was fixed with very careful application of putty and even more careful removal, leaving the canopy flush at least. 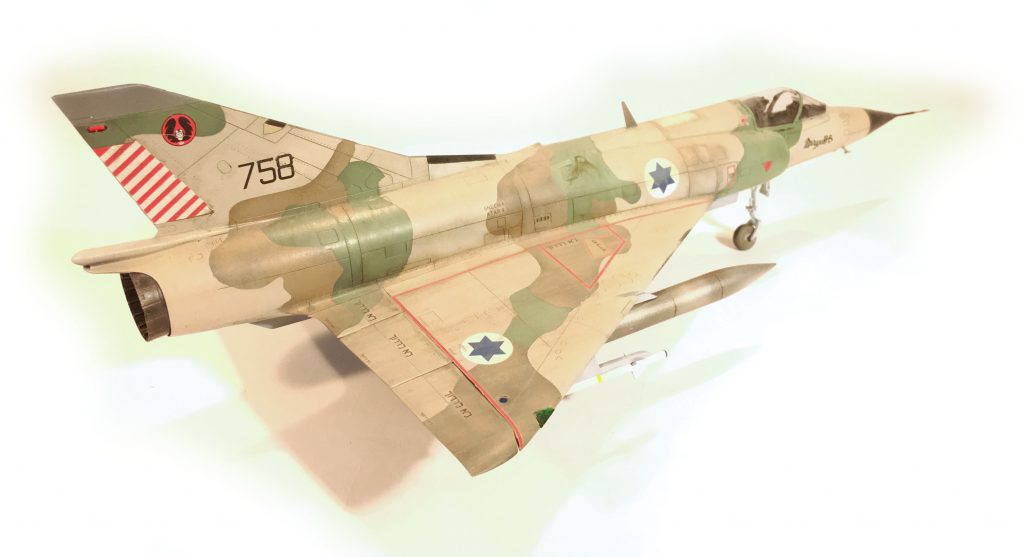 The wings went on smoothly for the most part, with the glaring exception being the front of the lower wing piece.  A combination of mould misalignment and the part possibly being a millimetre or two short meant that quite a serious bit of filling and sanding was required around these complex shapes.  You might enjoy this.  I didn’t.

At the back of the wing we have the ailerons and flaps.  None of which want to sit flat or at the same angle as their peers.  However with patience and TET they went in and stayed there.

All of this pales in comparison with the landing gear.  A cursory glance had suggested that this should be easily built up once the kit was painted.  After all, there were no weird attachment points that would be inaccessible later.  It occurs to me that a “cursory glace” may be defined as “one which will later cause you to curse.”

The landing gear can certainly be built up later.  Because frankly, there are no attachment points.  Oh, there are some parts masquerading as such, but all offer very little purchase and in the case of the main gear, the struts don’t actually fit their locators.  Then you get the smaller struts.  No positive location – at either end! – and some are carefully shaped but nonetheless don’t line up.  As for the gear bay doors, these are attached very weakly via the struts which have no positive locating and are exceptionally fragile. 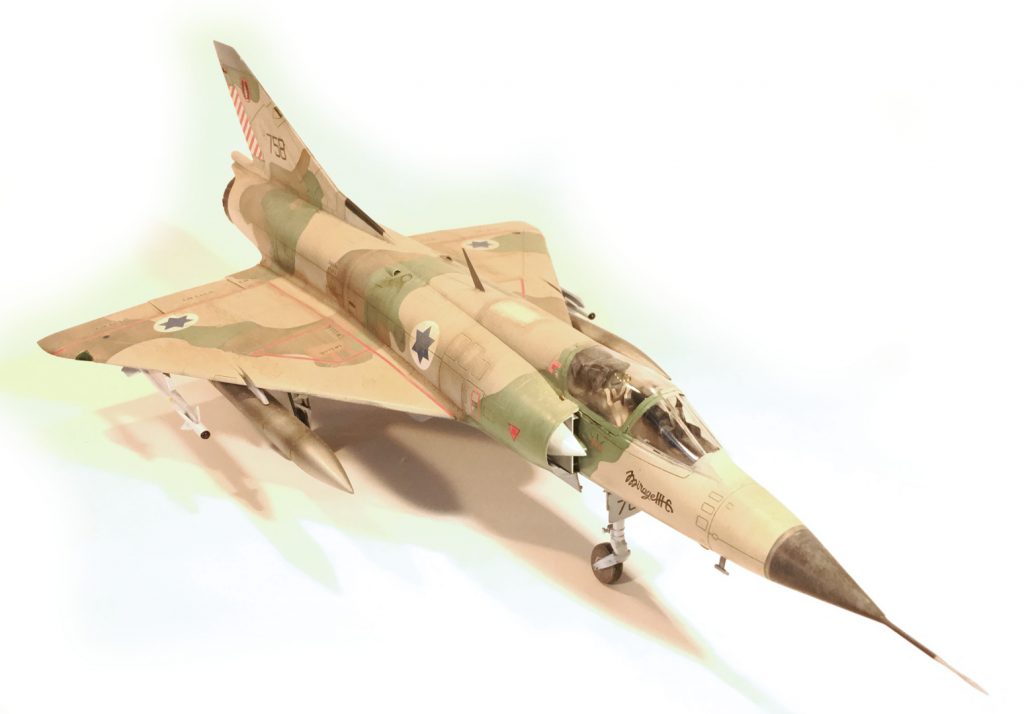 In fact, the whole undercarriage is exceptionally fragile.  Never before had I gently swung my turntable around to place a decal on the other side, only for the model to wobble and shed all three of its wheels.

Happily, I can report that the decals are very nice.  Good register, nice colours, detail is good. 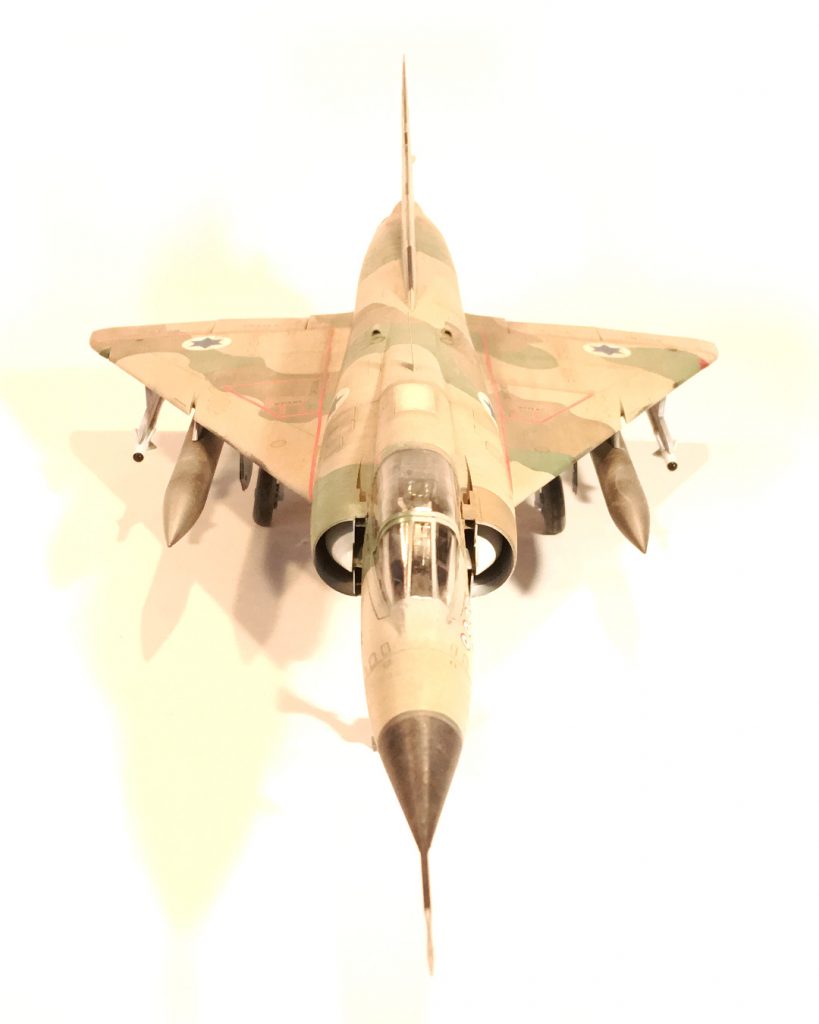 I bought this kit through Topnotch Masks who provided a set of masks for the camouflage scheme.  This was painted as usual with Mr Paint.  Both masks and paints were a delight to use, as always.

George Bernard Shaw said, “do not do unto others as you would that they should do unto you. Their tastes may not be the same.”  You may really enjoy this kit.  For me, it had too many annoyances, unforced errors, and moments of plain user-unfriendliness. 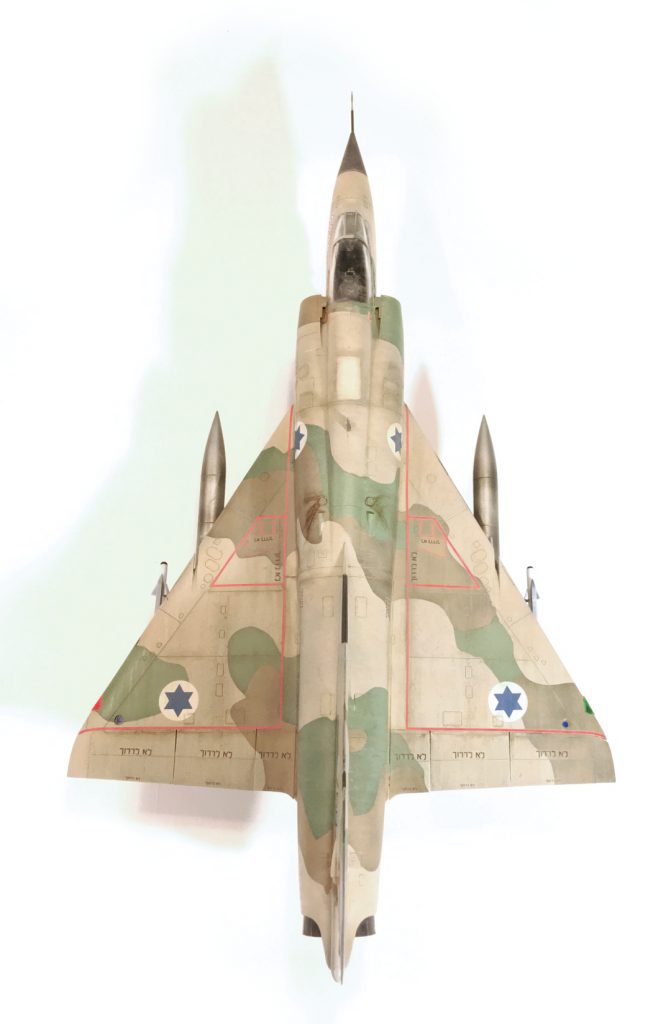 Next article Poor History, Visibility and Elan: a response to Doogs' Models

I am going to build this one in the near future. Thank you for the comments on the kit’s issues. Very helpful.

Very good review. I have the kit in the stash awaiting to be started. I was already aware of the issues with the kit as I also have a weekend edition I have started , so the problems you mentioned came as no surprise. My fuselage on the weekend edition also had a twist in it so alignment was a serious pain. My canopy windshield sat high on one side so I have sanded the front cockpit coming edge flush as it also sat proud on the port side of the fuselage. Thanks for the great article and in progress pics.

No problem at all, best of luck!