After the Corsair, I wanted a straightforward, not too involved build to end the year.  I was really enjoying 1/32 props, and was looking for a low parts count and something that would fit well.  Hasegawa’s Kurfurst fit the bill on that point.  Overall though, this was a “were they even trying?”.

The Bf-109K, or Kurfurst, was the last operational variant of Messerschmitt’s famous fighter produced during WWII.  It was an attempt to simplify production by coalescing the variety of versions into one.  Despite the airframe showing its age by this point, the Kurfurst remained an effective fighter, with limited use of high octane fuels and the MW50 water-methanol injection providing very high speeds.  As Greg said in his excellent Youtube series on engine boosting in WWII fighters, right to the end of the war, an Allied pilot engaging a Bf-109 needed to be cautious: it could be a K-4, with MW50 boosting, and it could be flown by a pilot with over 100 kills. 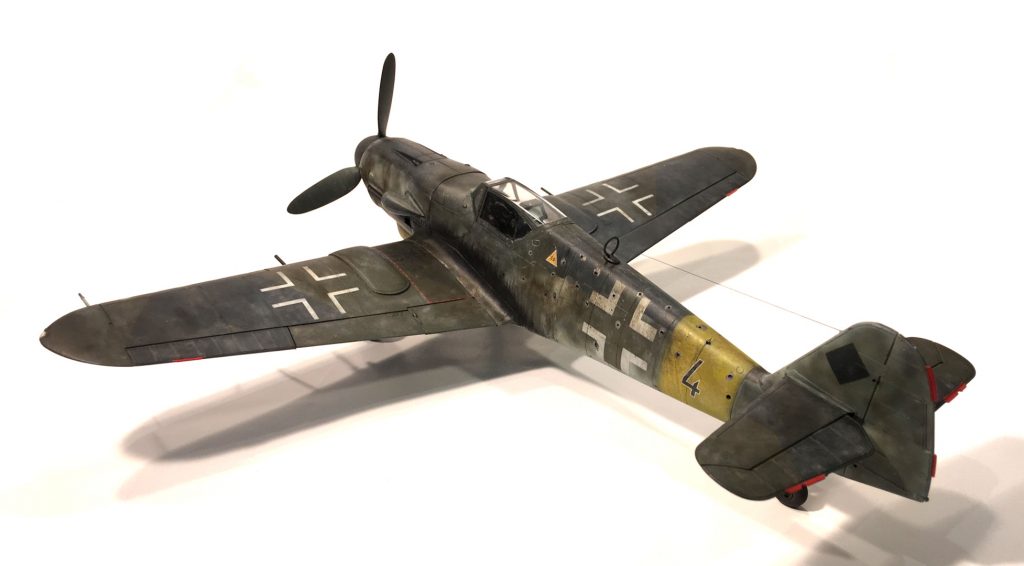 It’s also not a variant I have huge interest in.  In fact, I intended to buy Hasegawa’s Gustav, but after already ordering masks for it, was informed it was out of stock.  Anywhere in the UK.  So I got this one instead.

This is a very simple kit which is clearly squeezing more variants out of an existing tooling.  This is shown by the split fuselage, which adds the distinctive fairing over the Gustav’s nose gun bulges, the existence of a cockpit wall insert with directions to scrape off the original, and multiples of a few different parts including propeller blades and windscreens.  The other parts appear common to another late Bf-109, but I don’t know which one. 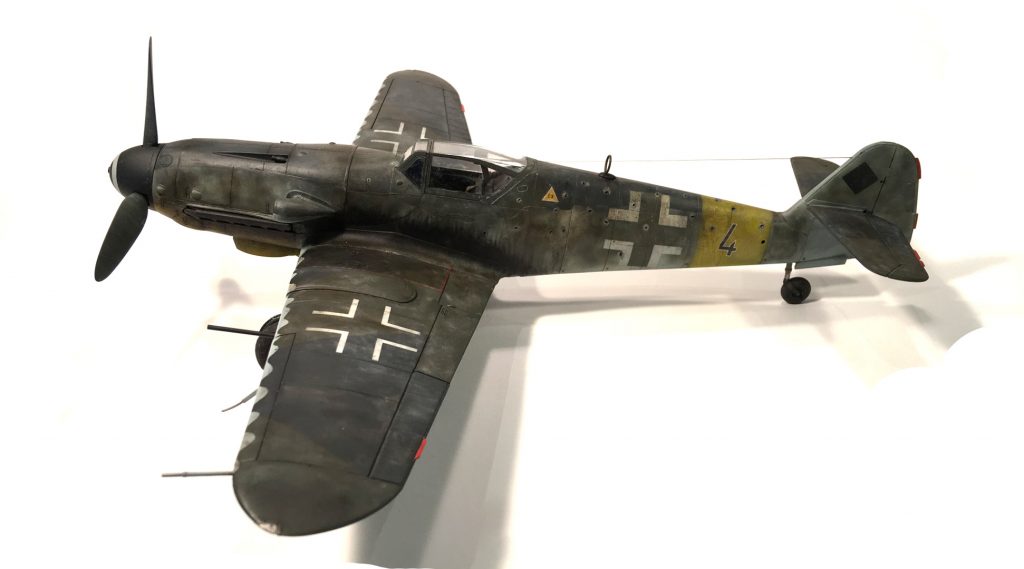 Initial impressions were quite good.  I was expecting a very simple kit: it’s a Hasegawa.  They typically sacrifice detail and parts count for straightforward buildability, which isn’t a bad thing as long as what you get fits and looks good.

True to form, construction starts with a nice cockpit which all goes together neatly.  Then you seal up the fuselage, pop the wings on, and frankly there’s not much more to it. 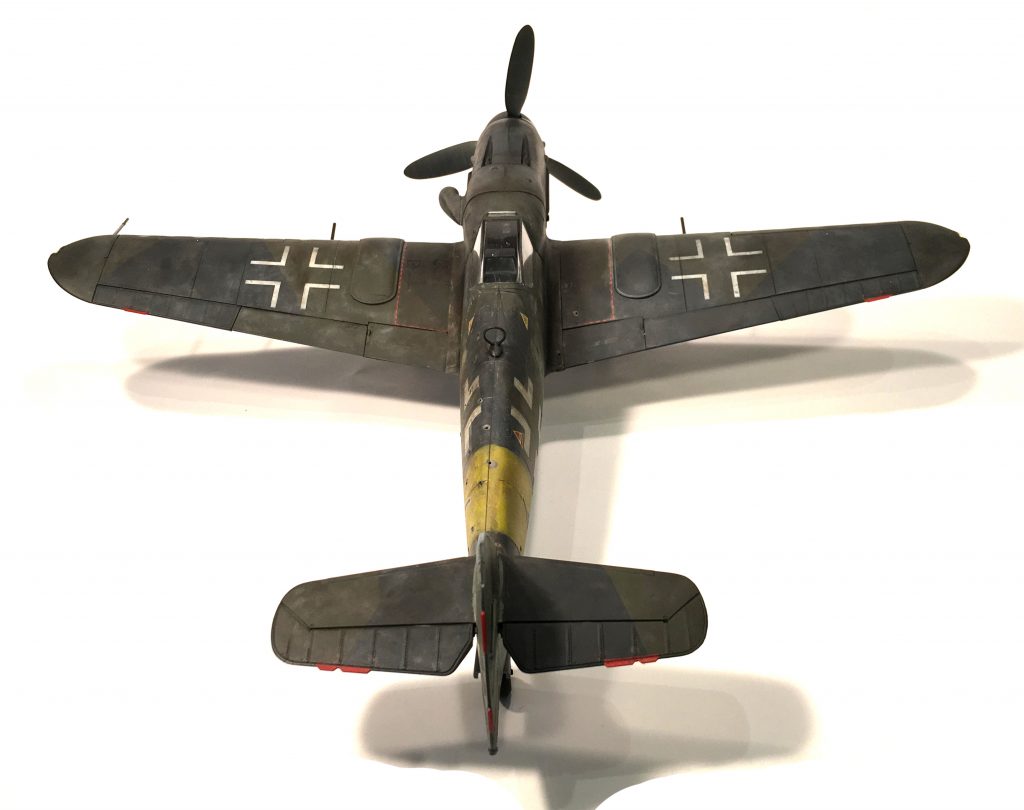 The fuselage was a worry: a split front to back as well as side to side can be a recipe for poor fit and alignment issues.  Here, there is a substantial guide piece, which aligns the rear fuselage in a fairly foolproof manner.  I built the front and back separately, then attached the two, rather than going left and right side.  Partly because that’s what the instructions recommend, partly because test fitting suggested this would give the more solid assembly.  Either way, it worked well.  I notice there’s a slight right trim to the rudder, which is curious.

Edit/update: I am informed by Bf-109 expert Rob Knight that the rudder trim is accurate, being a feature of at least the late-war 109s.  The trim was introduced to counter the torque of the engine on takeoff, since while experienced pilots knew to counteract it, the inexperienced pilots forming the bulk of the Luftwaffe in the late war would not have.  Further, throughout the production run of the Bf-109, takeoff accidents and ground loops caused high loss rates.  Thanks Rob! 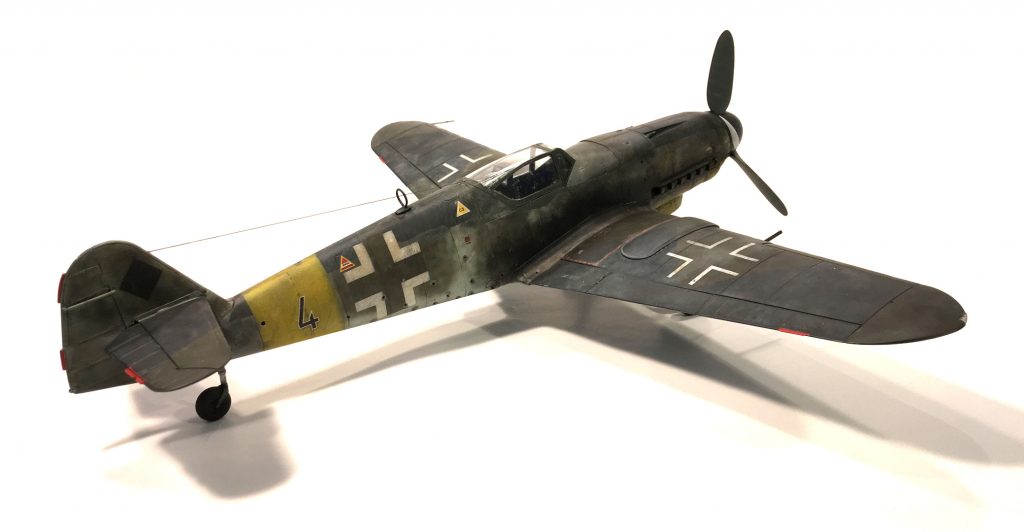 The only assembly issues were in the wings.  The point at the rear of the wing where the rear fuselage parts come together with the floor piece was the only one which needed much filler.  The wings slot onto spars which should give good alignment, but in fact necessitated a fair bit of shoving.  I broke out the serious solvent – MEK – to get them to sit tight.  Once there, the fit was acceptable. 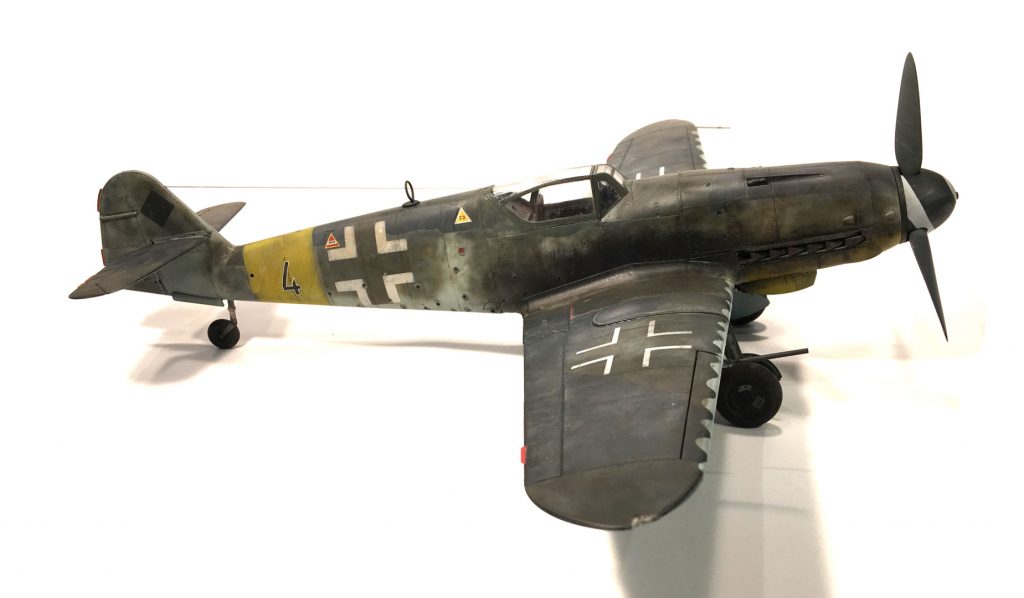 My gripes with this kit

So, nice simple build, fits well, made a nice looking model… what am I complaining about, right?

The problem here isn’t that the plastic is bad, far from it, I would happily build another Hasegawa Bf-109: the problem is the kit. 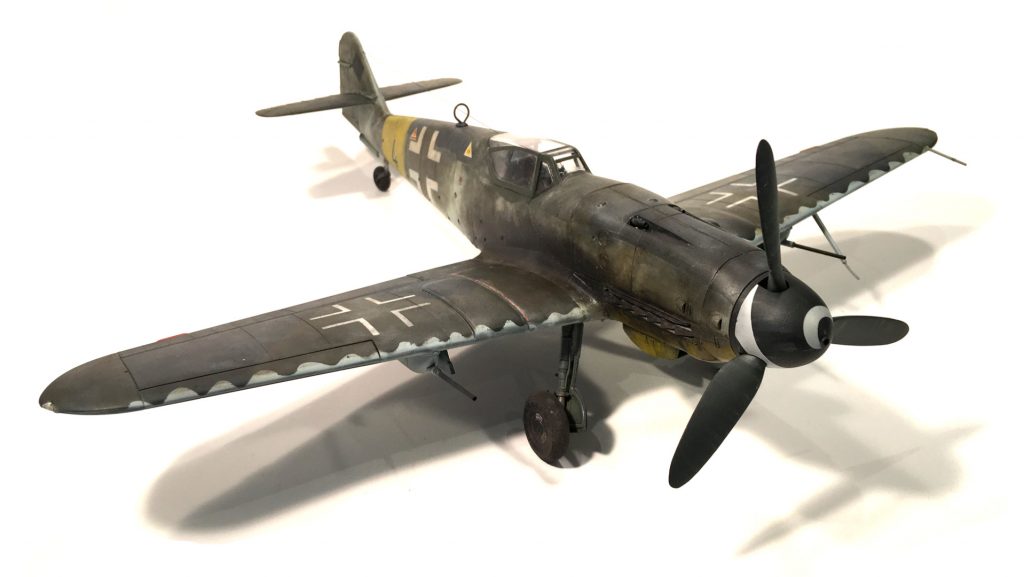 The decals and instructions have baffling choices which suggest the intern was told to chuck this together while everyone else went on a company holiday.  Over the weekend.

Start with the colour schemes: two are provided, and they are practically identical apart from using two different sets of RLM colours.  They both feel incomplete, as neither has the rank bars or chevrons, and one doesn’t even have an aircraft number.  I’m no Luftwaffe expert, nor a Bf-109 expert, and especially not a Kurfurst expert, but I thought these were standard practice for Luftwaffe units. 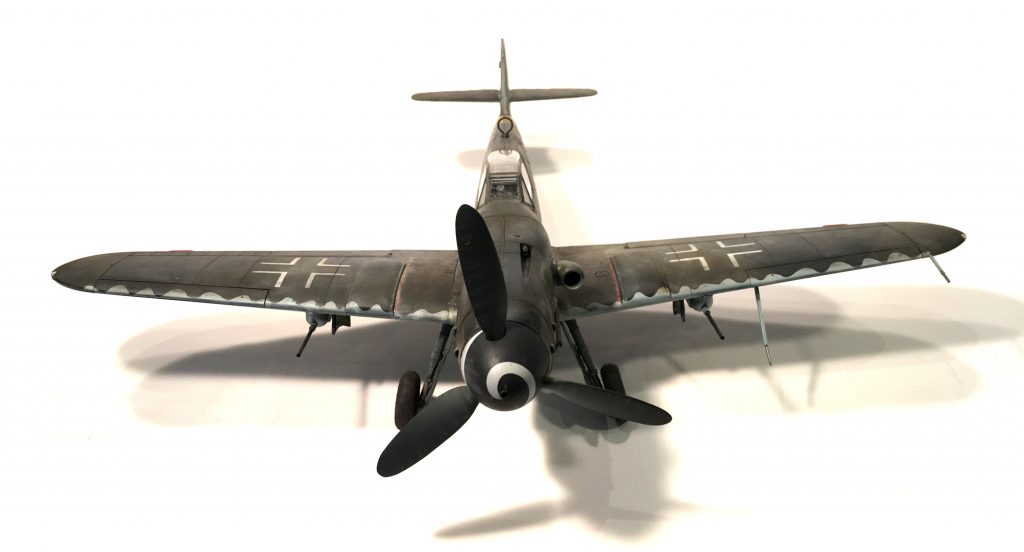 How about maintenance stencils?  The decal sheet doesn’t provide ones which are very common, such as the “Kein Bombe!” Frequently seen on drop tanks, and yet many of those which are included are oddly absent from the instructions. 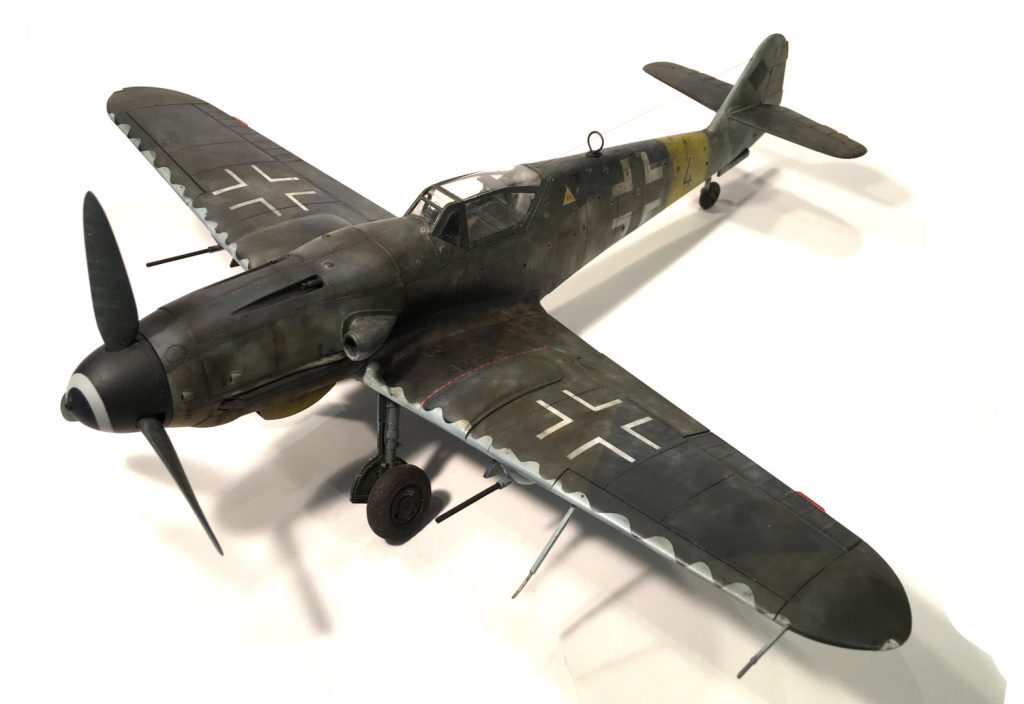 Then we get to the stuff included in the kit, but not in the instructions.  For example, the underwing gondola cannon are included (and per my research, were often mounted on the real thing), but they are absent from the instructions.  Likewise the drop tank. 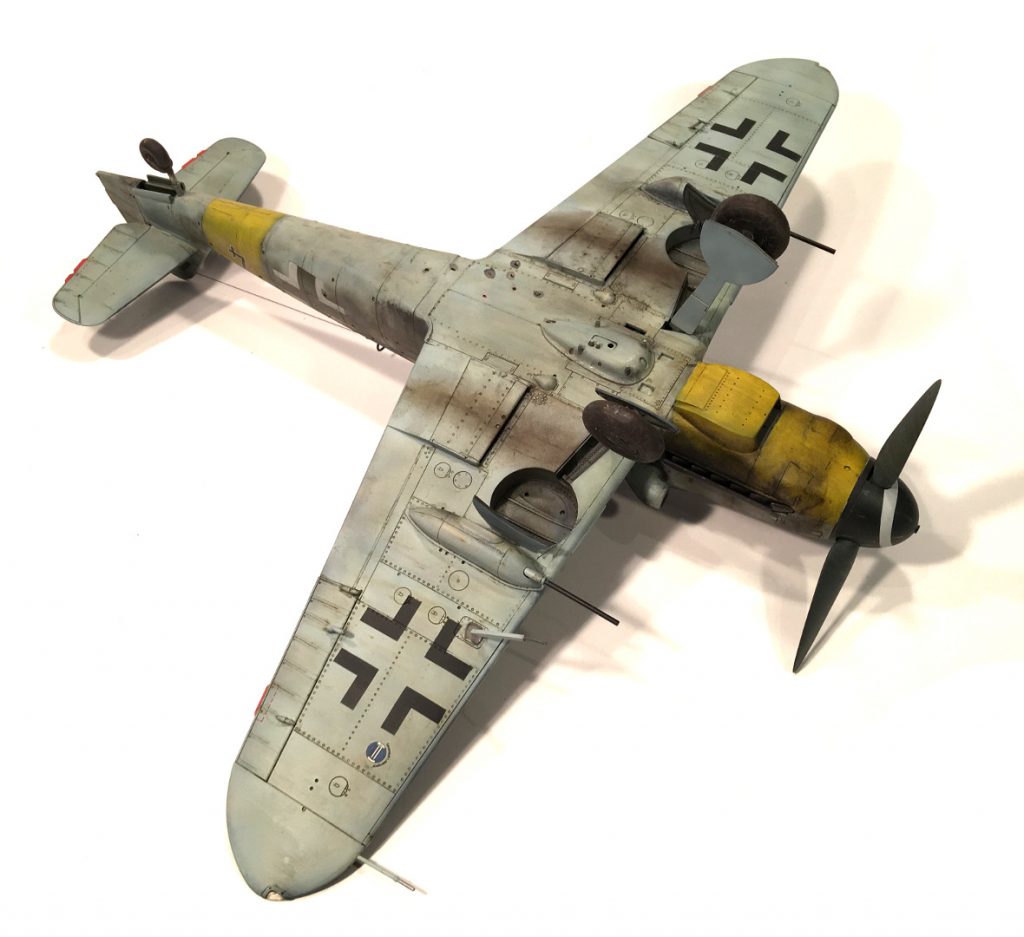 For me, the maddest part is the instruction to shave all the moulded detail – really nice moulded detail at that – off the instrument panel, and to replace it with an identical decal.  Now, the decal is nice as well, it’s accurately colour-printed, and both decal and plastic include dials and needles, so I took what I think is the path of least madness and cut the dials out of the decal panel, stuck them on the plastic part, and used Aqua Gloss to make little windows. 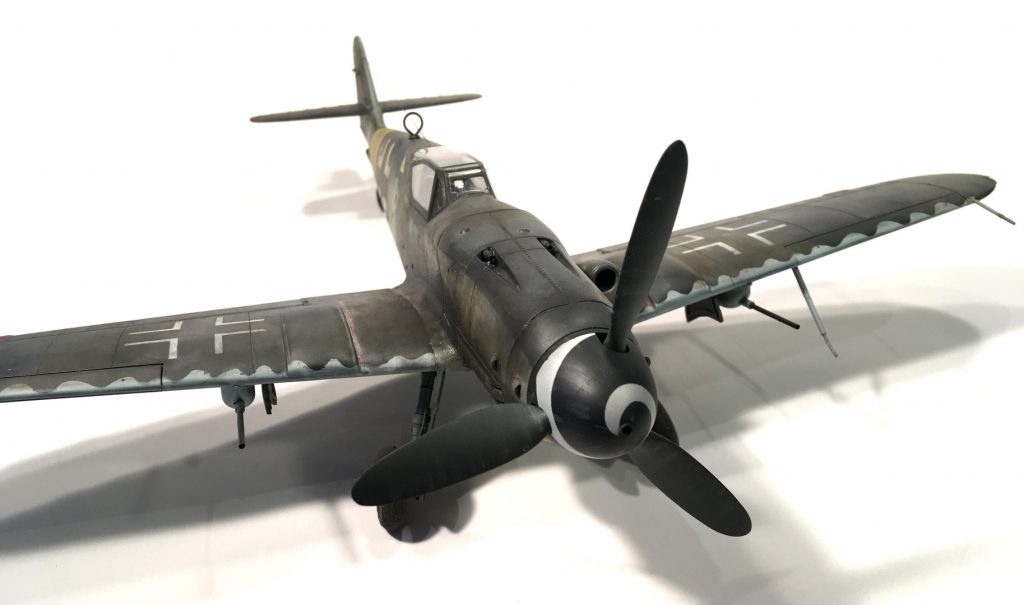 These aren’t issues which make this a bad kit, but they are disappointing because it feels like Hasegawa couldn’t be bothered to help the modeller make the most of the kit provided.

Thoughts from my build

This one went very smoothly apart from a shock after painting.  Following the Corsair, I was hoping to consolidate, with a reasonable build and paintwork that I could be pleased with.  I wasn’t expecting it to surpass the Corsair: that was a build where I had a very clear idea of what I wanted to achieve and had spent a long time developing skills specifically to achieve it. 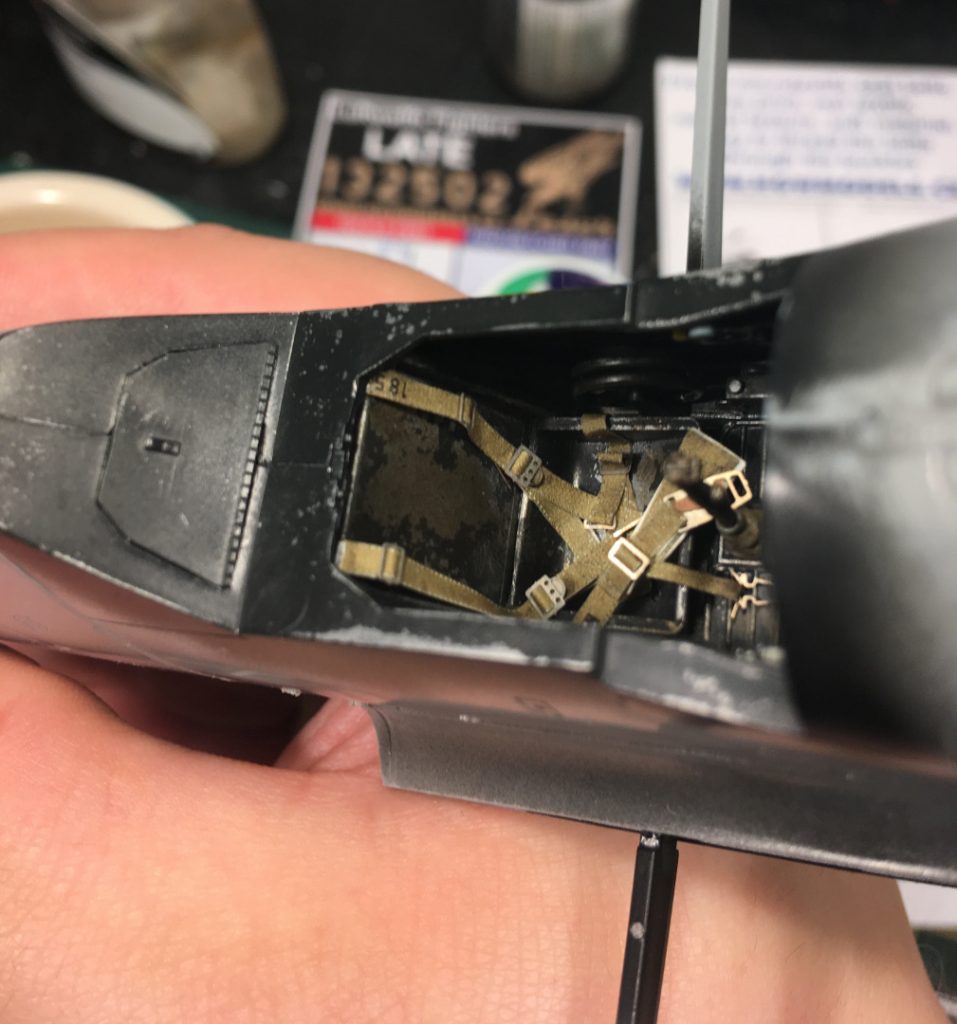 I was very pleased with the approach taken in the cockpit, with a mix of oils and chipping which I feel looks quite acceptable for an aircraft that has operated in damp European conditions.  This is also the best I feel an aftermarket seatbelt has worked for me.  The wheels likewise worked well, with the pigments looking more realistic for mud in scale than I have managed before. 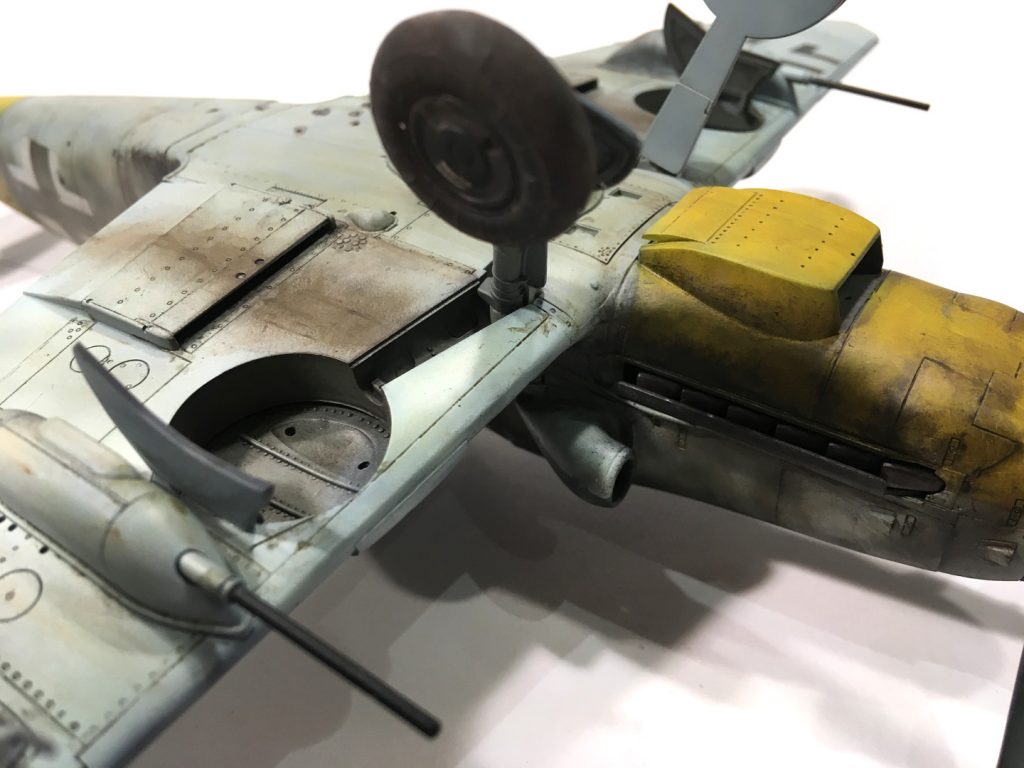 The build itself was probably a bit more accomplished than any I have done previously.  I took a lot more care smoothing out seams than I have in the past, aided I think by the simplicity of the build.  When you can see very few parts and steps, it’s easier to find the motivation to take a bit more effort over the seams that are present.  Of course, unlike the Corsair, there were some… I also took the time to drill out the gun barrels and the exhaust stacks. 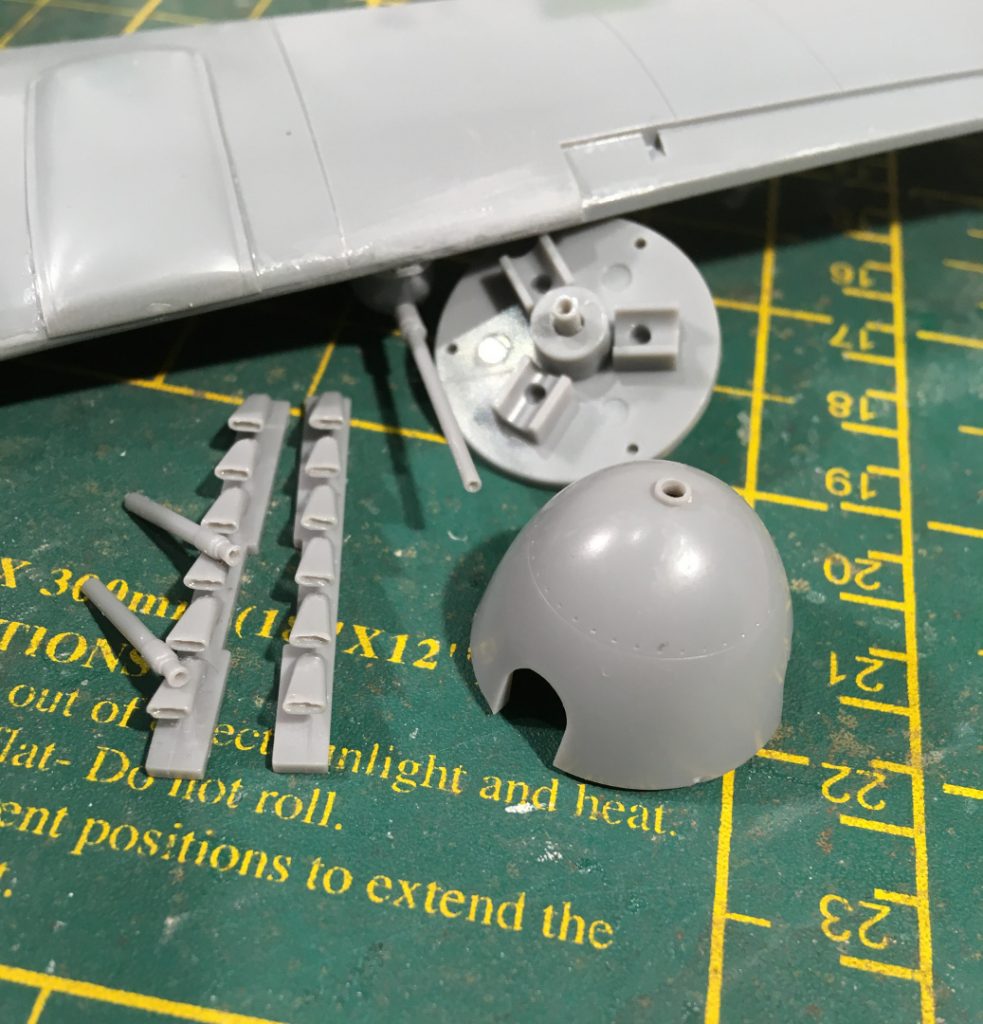 The shock came when I had finished the basic painting.  The model looked a very long way from what I had envisioned.  Granted, it wasn’t helped by having the wrong colours, but I wasn’t at all sure I would be able to get anywhere near the vague idea I had. 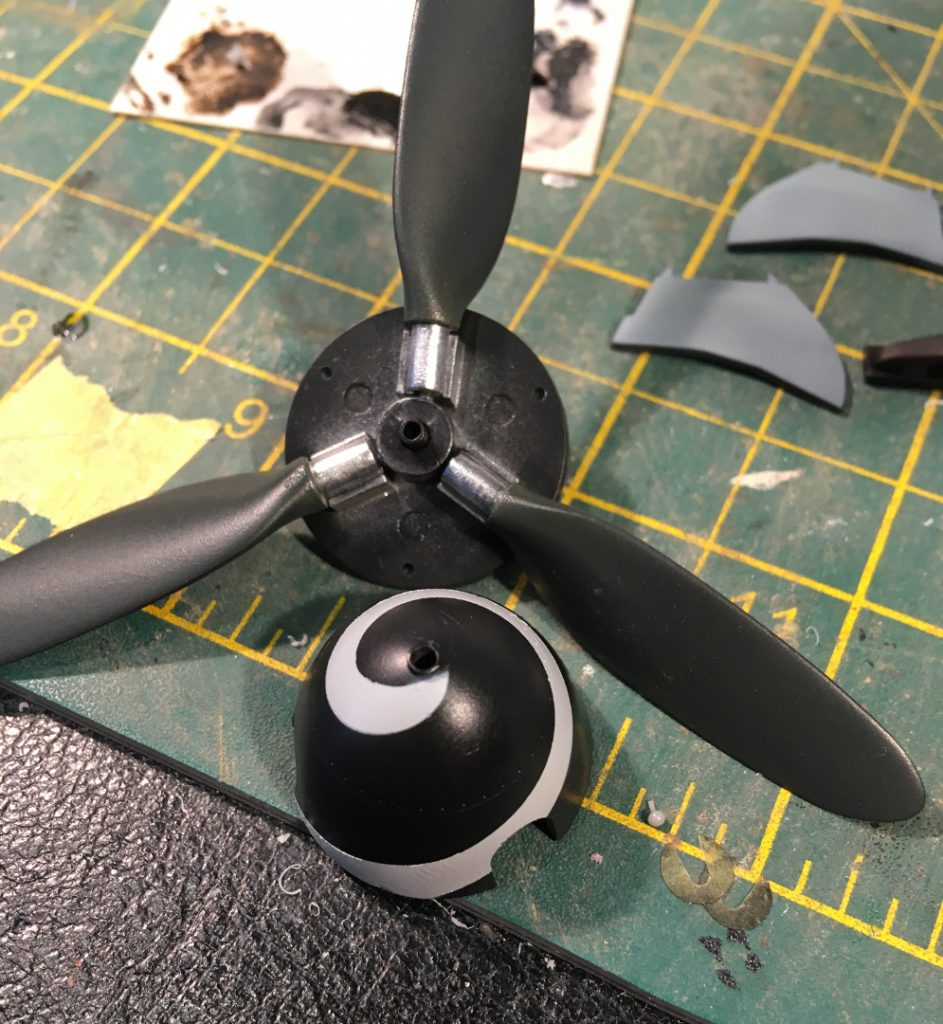 The first step toward fixing it came with applying the insignia and other markings.  The crosses were sprayed using Topnotch masks, and the kit decals used for the rest, apart from the tail where a homemade diamond completed how I prefer to display these aircraft. Then a layer of salt weathering, before several passes of oils: dark brown, white, and blue-grey.  Grime around the engine was a mix of brown and black oils, with the exhaust stain being largely black pigments. 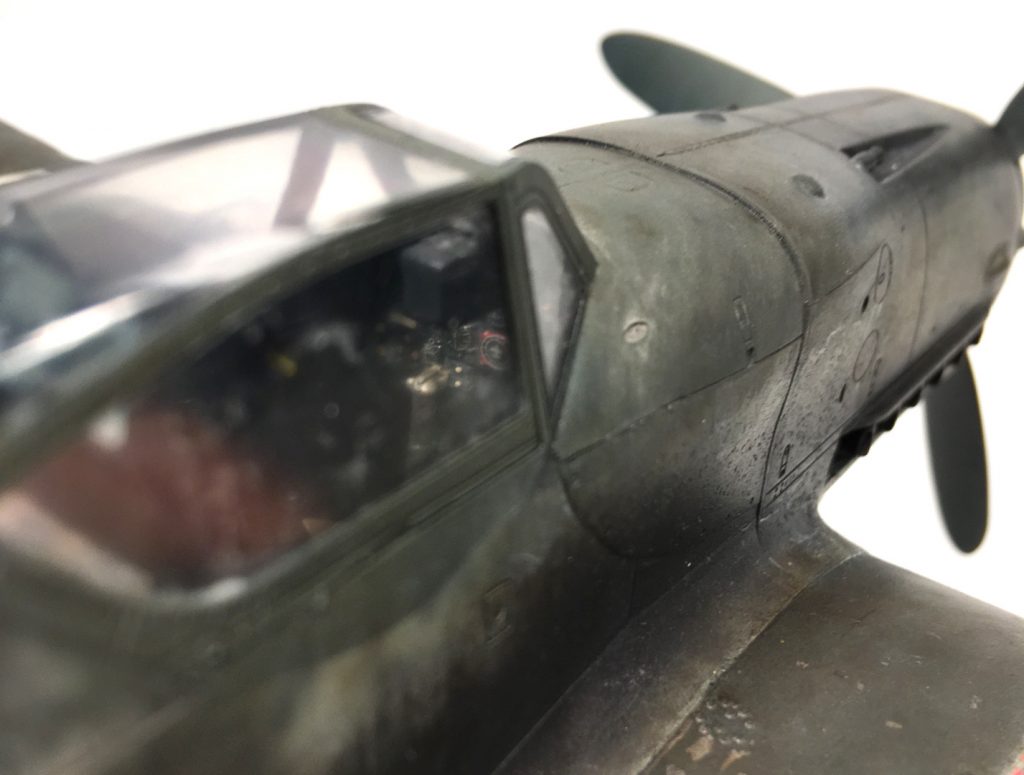 I was pleasantly surprised by the effects these had on the model, and while it’s not as impressive as the Corsair, I do think it’s the second best that I’ve completed. 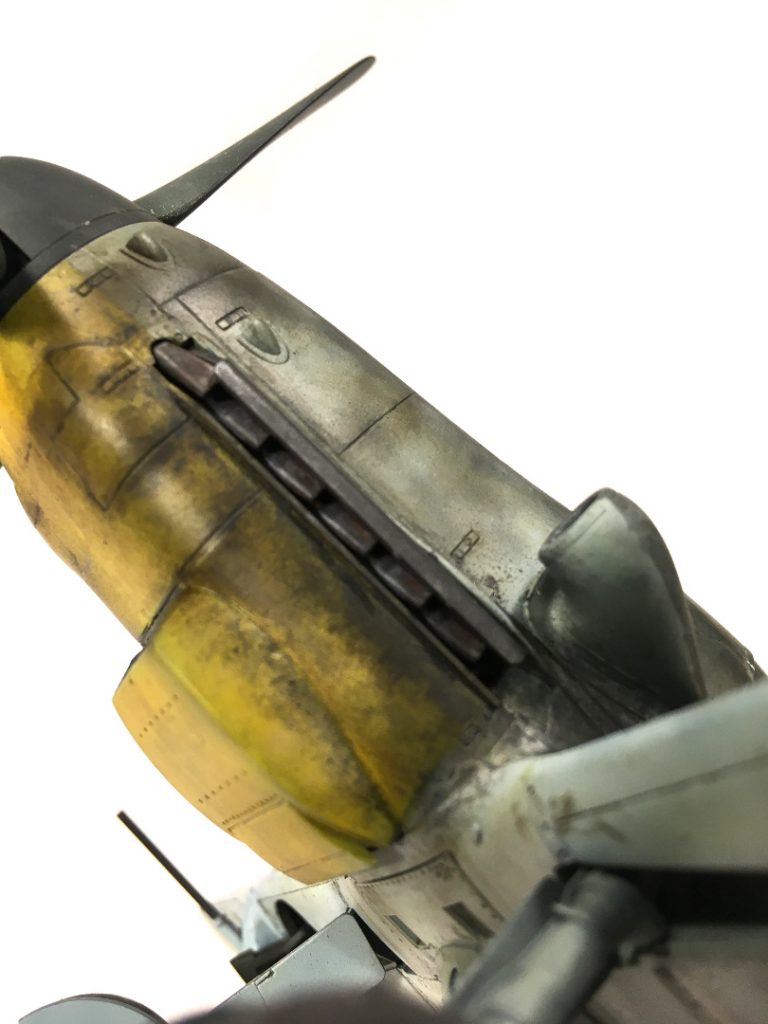 The model was completed with:

The only aftermarket used was a HGW seatbelt. 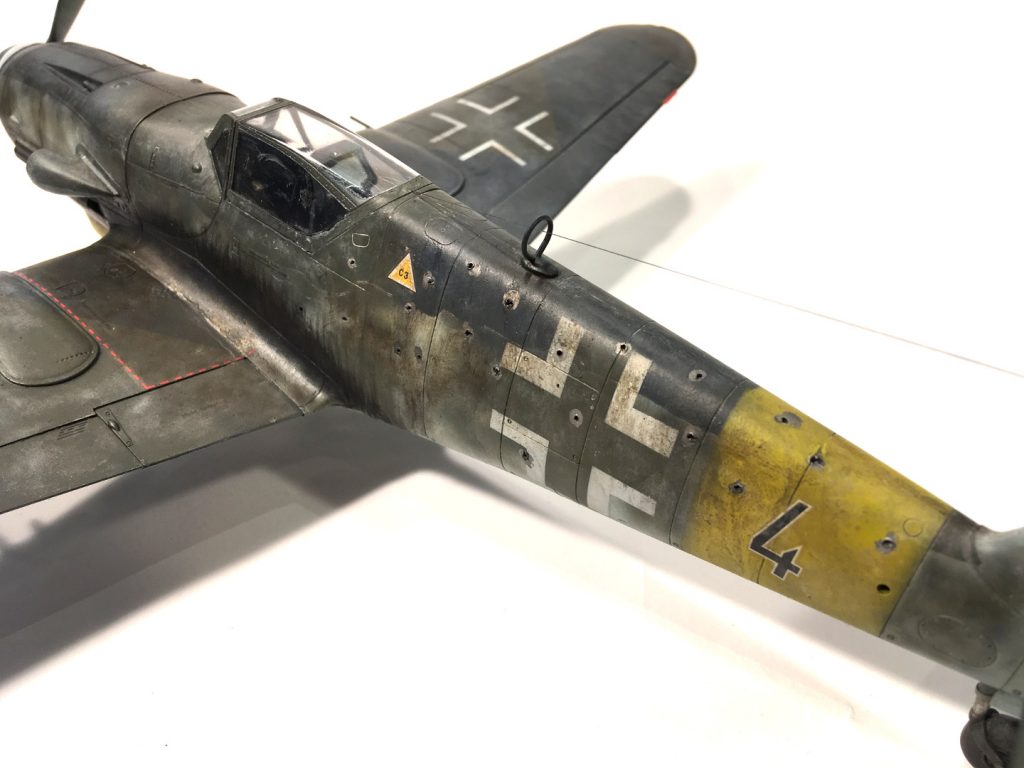 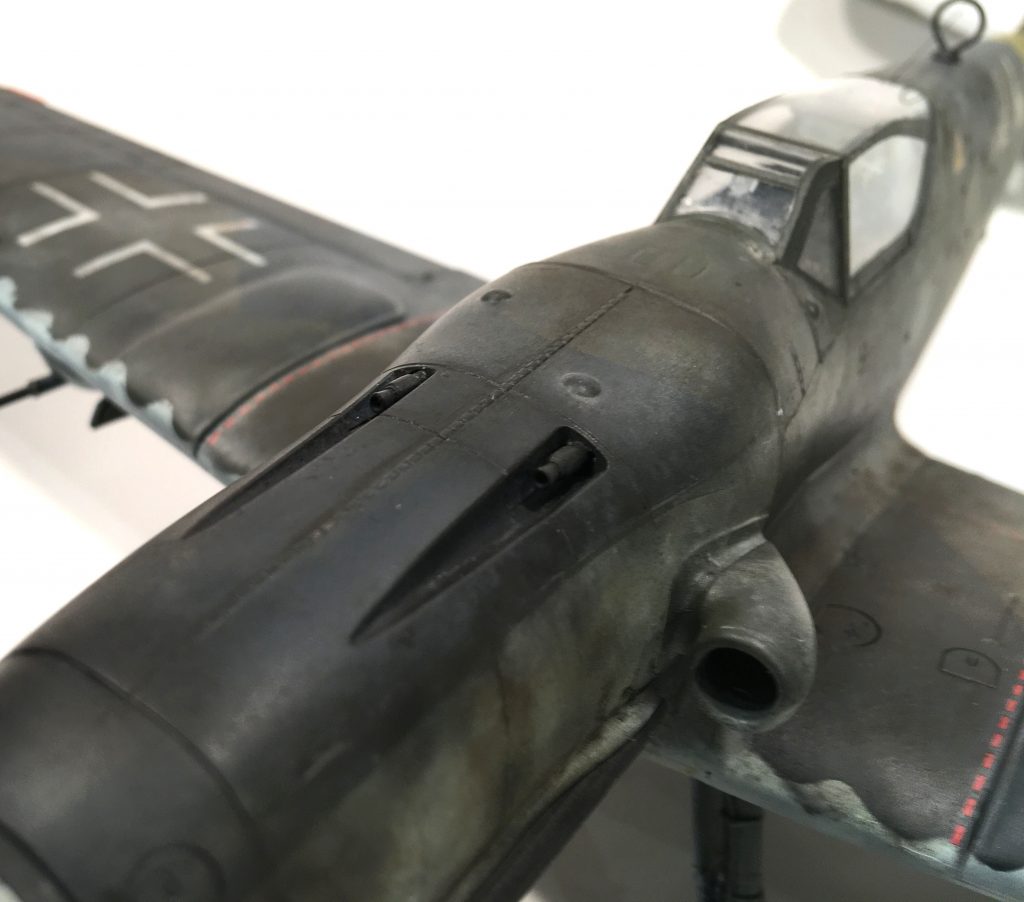 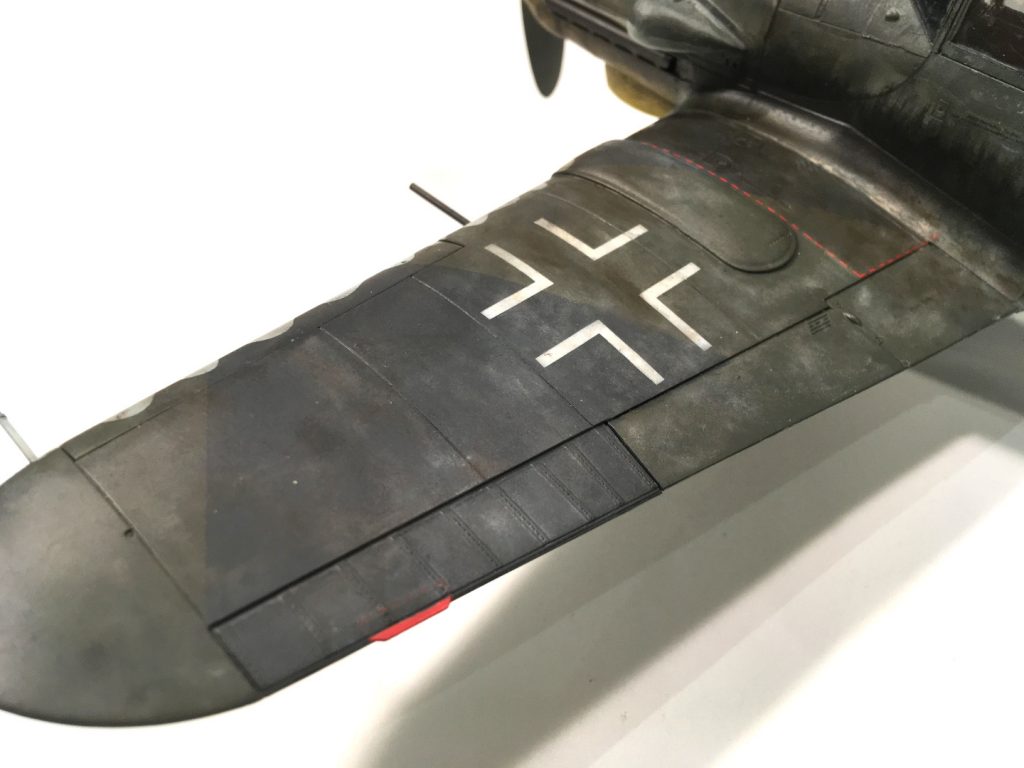 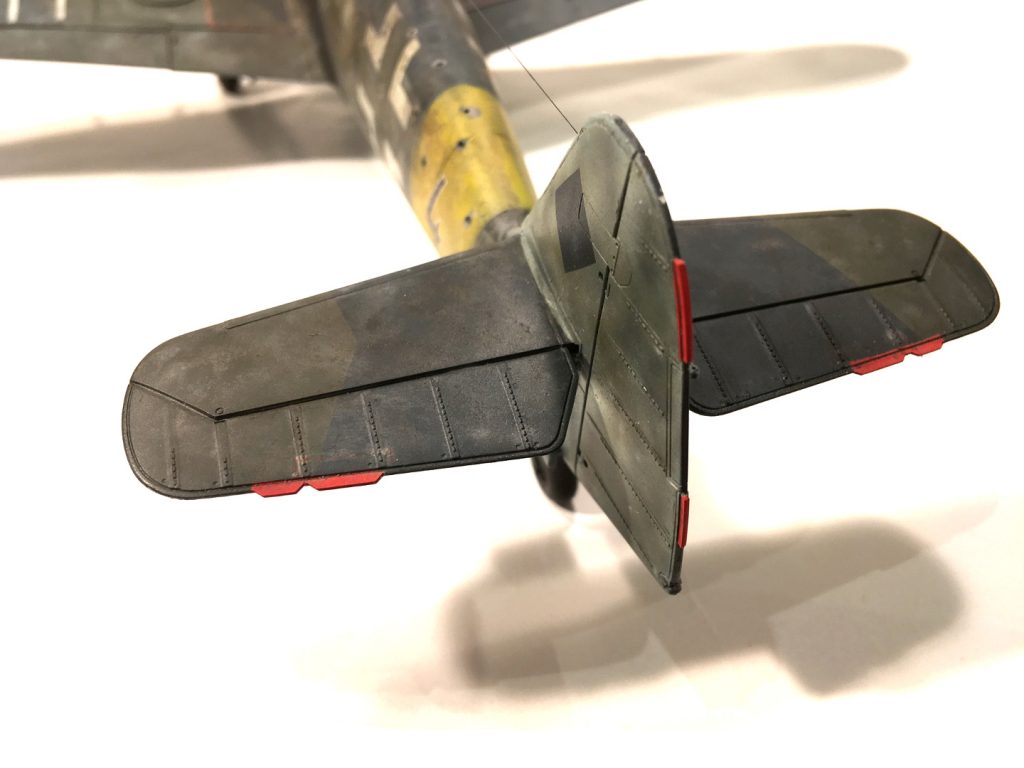 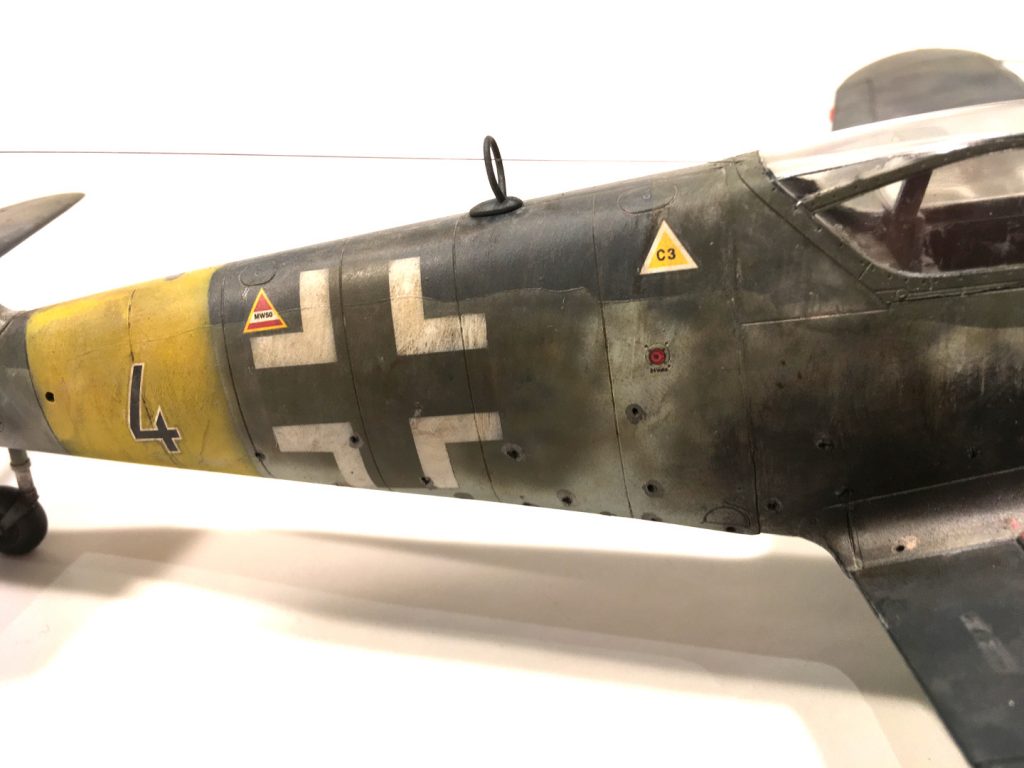 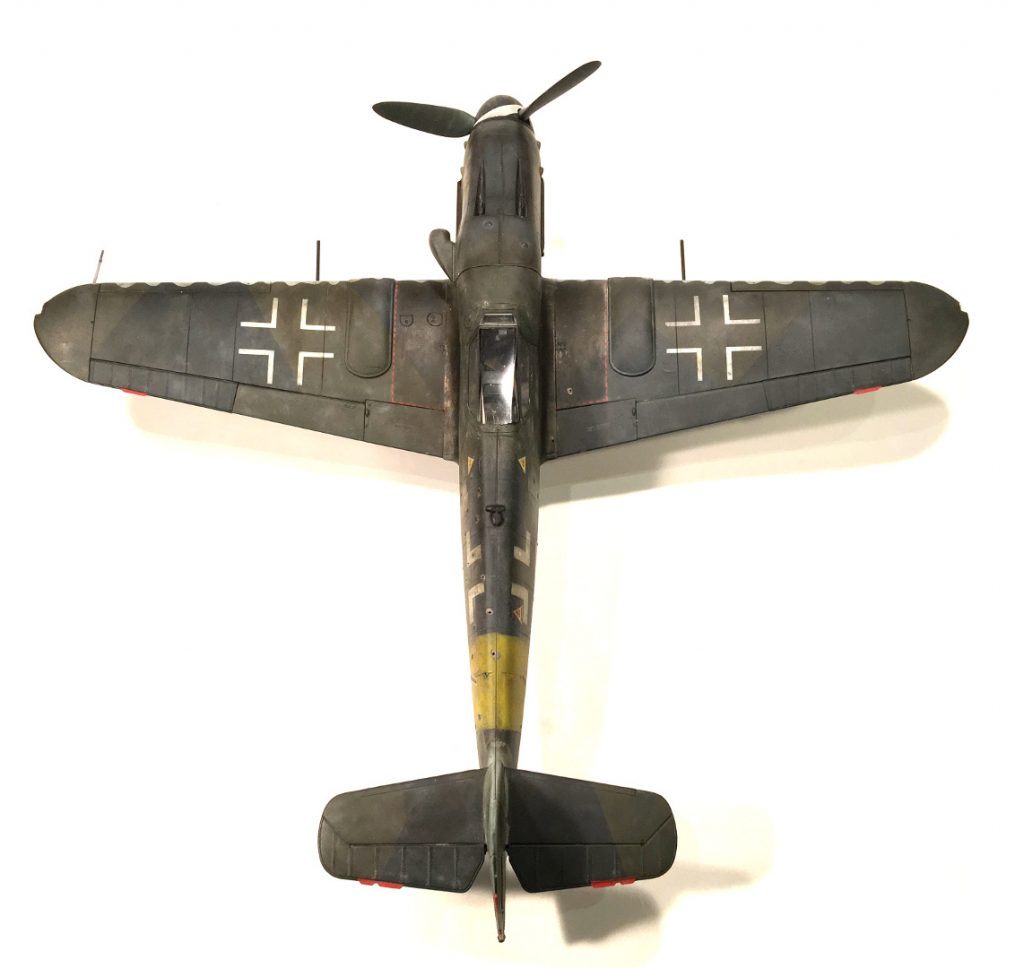 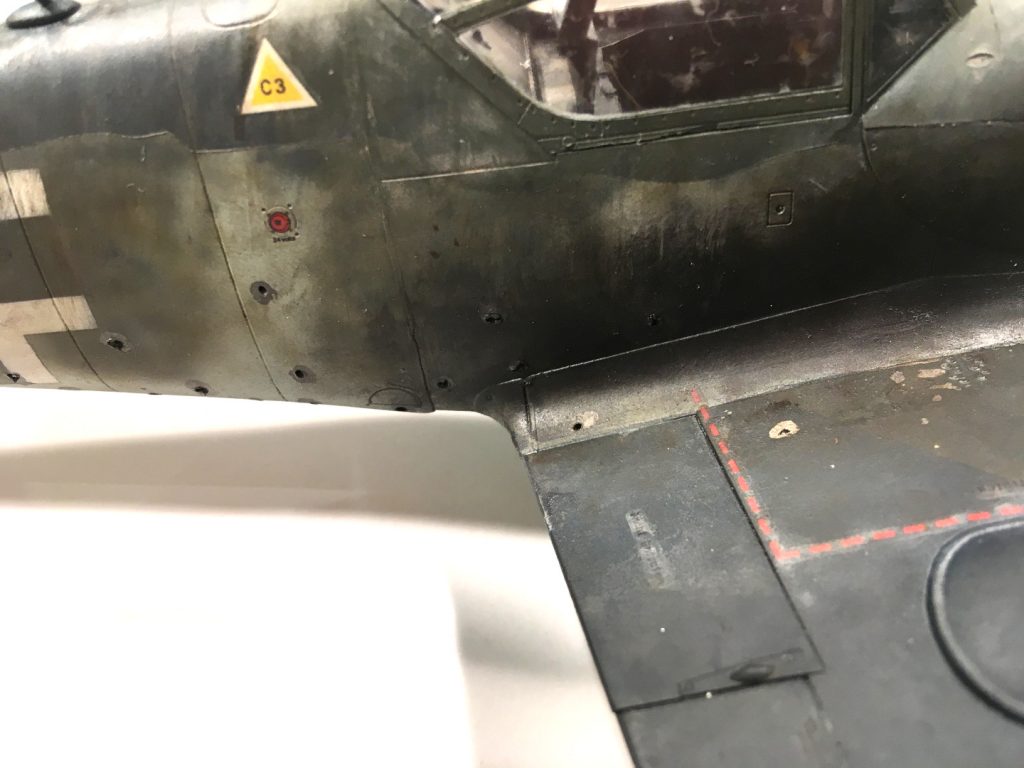 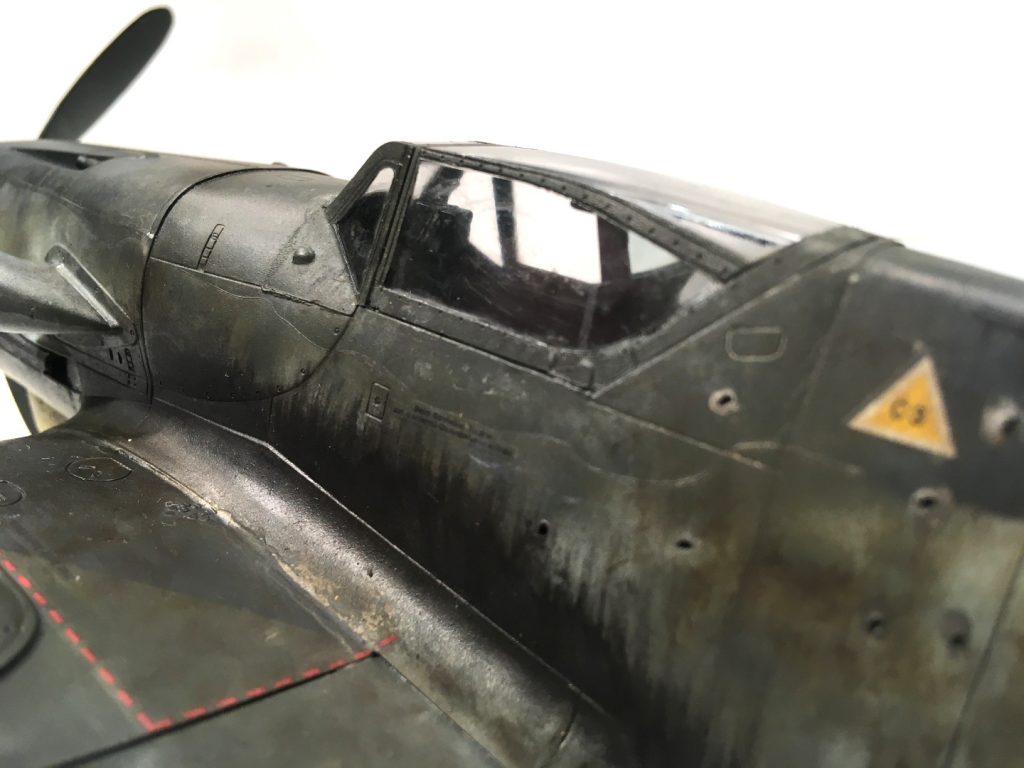 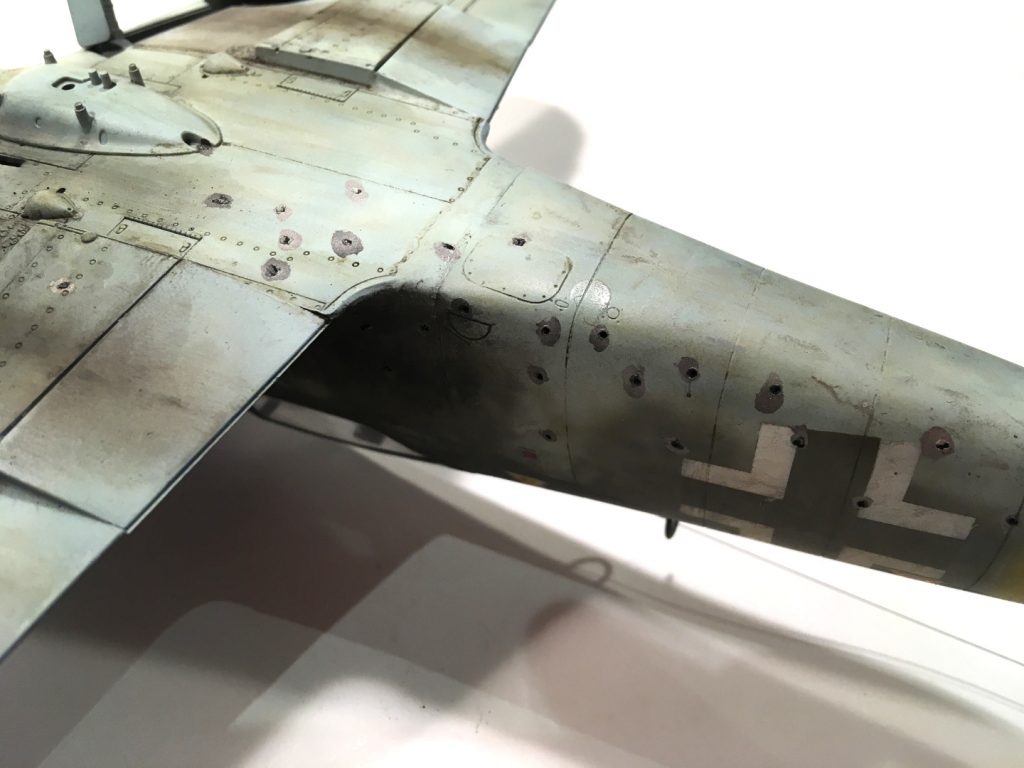 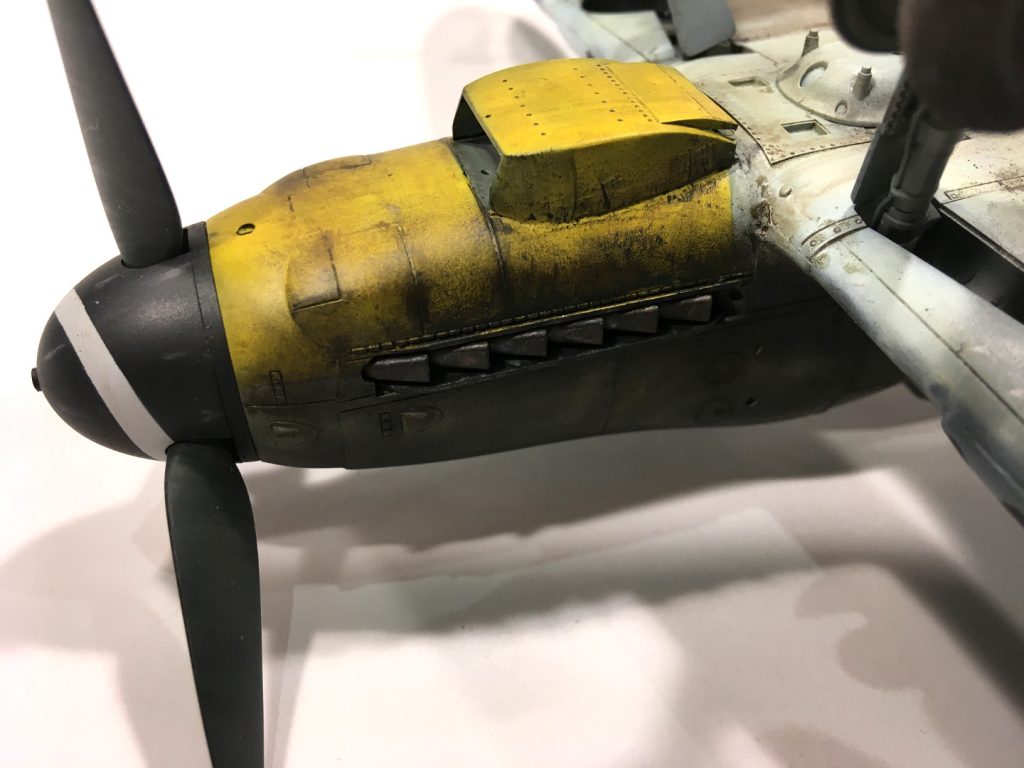 A nice article and a great build. Have you ever thought of doing an F series from the desert with the notable wear from the sand?

Thanks. The desert scheme is a very interesting one, and one I would love to have a go at. Thanks for the suggestion.