A Cold War Reconnaissance group build?  What could be a better fit than a big SR-71?  Admittedly I didn’t realise how big this kit was going to be, nor how frustrating.

I love the SR-71.  I never got to see one fly, but the occasional photo of this black jet that looked like a spaceship always piqued my interest.  Then there were the stories of how the RAF intercepted this strange thing in their Mach 2 capable Lightnings, only to have it vanish into the distance when the crew noticed them.  I finally got to see one in the Duxford museum, and it was every bit as intriguing as I had hoped.

There is no point in me re-telling the SR-71 story here, but I would like to address one point which has become confused over the years.  The SR-71 was not a stealth aircraft.  Many internet resources claim otherwise, and because one has done it, the others just copy and paste.

It is true that the Lockheed designers were very interested in the concept of low-radar-observable aircraft, and they did include features that they hoped would assist in this.  The chines along the fuselage sides were apparently not primarily a lifting body but intended to remove flat sides that would reflect radar.  The composite inserts along the wing edges were also hoped to reduce radar return.  I’m also sure that the SR-71 design showed the engineers what they were lacking, informing the later development of stealth technology. 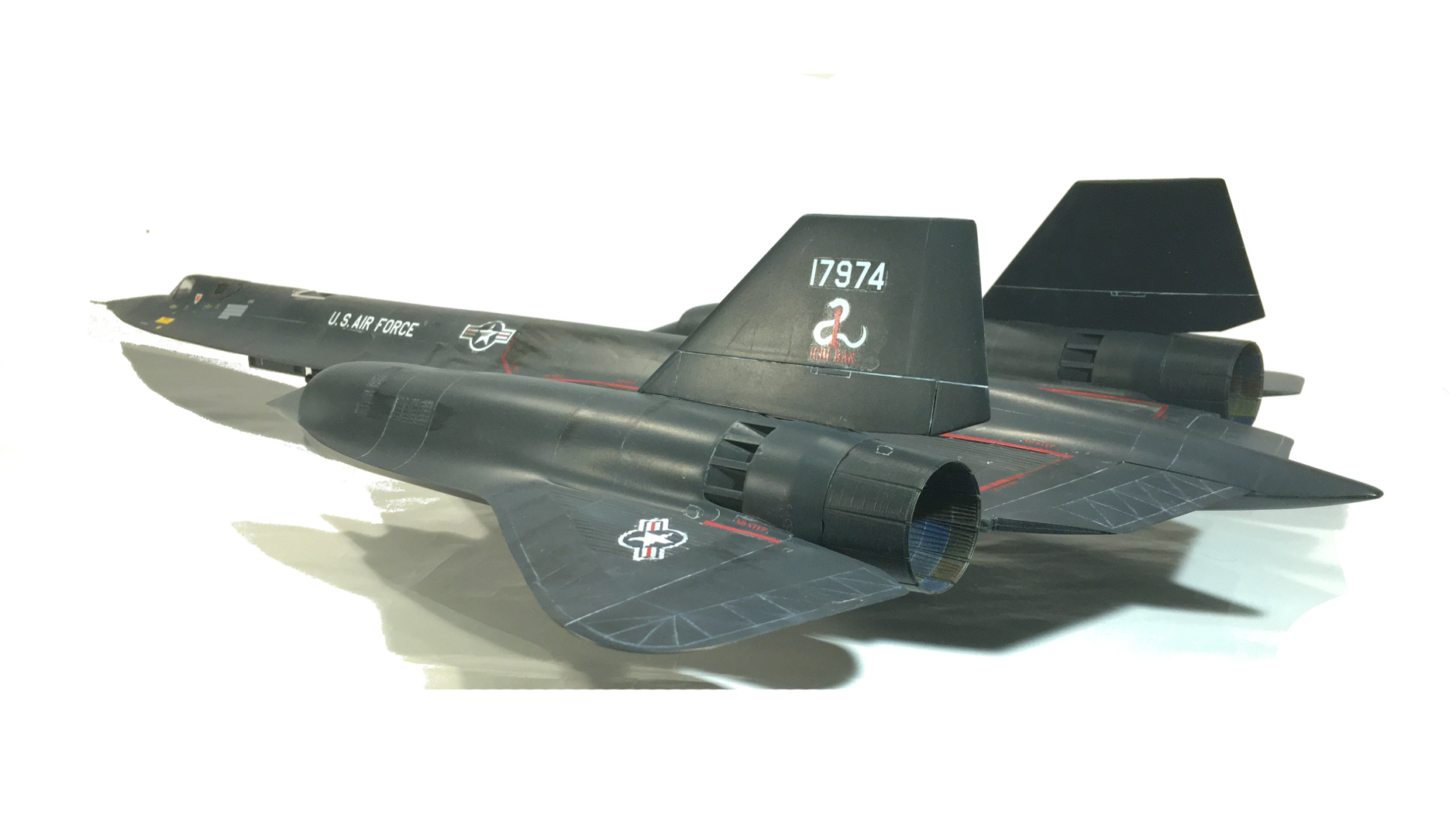 However, these features did not add up to a stealth aircraft.  The materials used were not radar-absorbent, and while the underside is quite smooth, the Blackbird was regularly tracked via primary radar return in the US, USSR, Sweden, and UK.  Presumably others as well, but I have seen those confirmed.  In the case of the USSR, Blackbird pilots have talked about being aware that they were being tracked by SAM radars, which indicates they were visible.  Keep in mind that Have Blue, the first viable stealth prototype, was flown about a decade after the SR-71 entered service.  As for the matte black paint, this is not radar absorbent to any significant degree but does assist with low observability at high altitudes.  Personally, I suspect the biggest benefit was in providing a surface that would radiate heat predictably over the entire airframe, which would be useful. 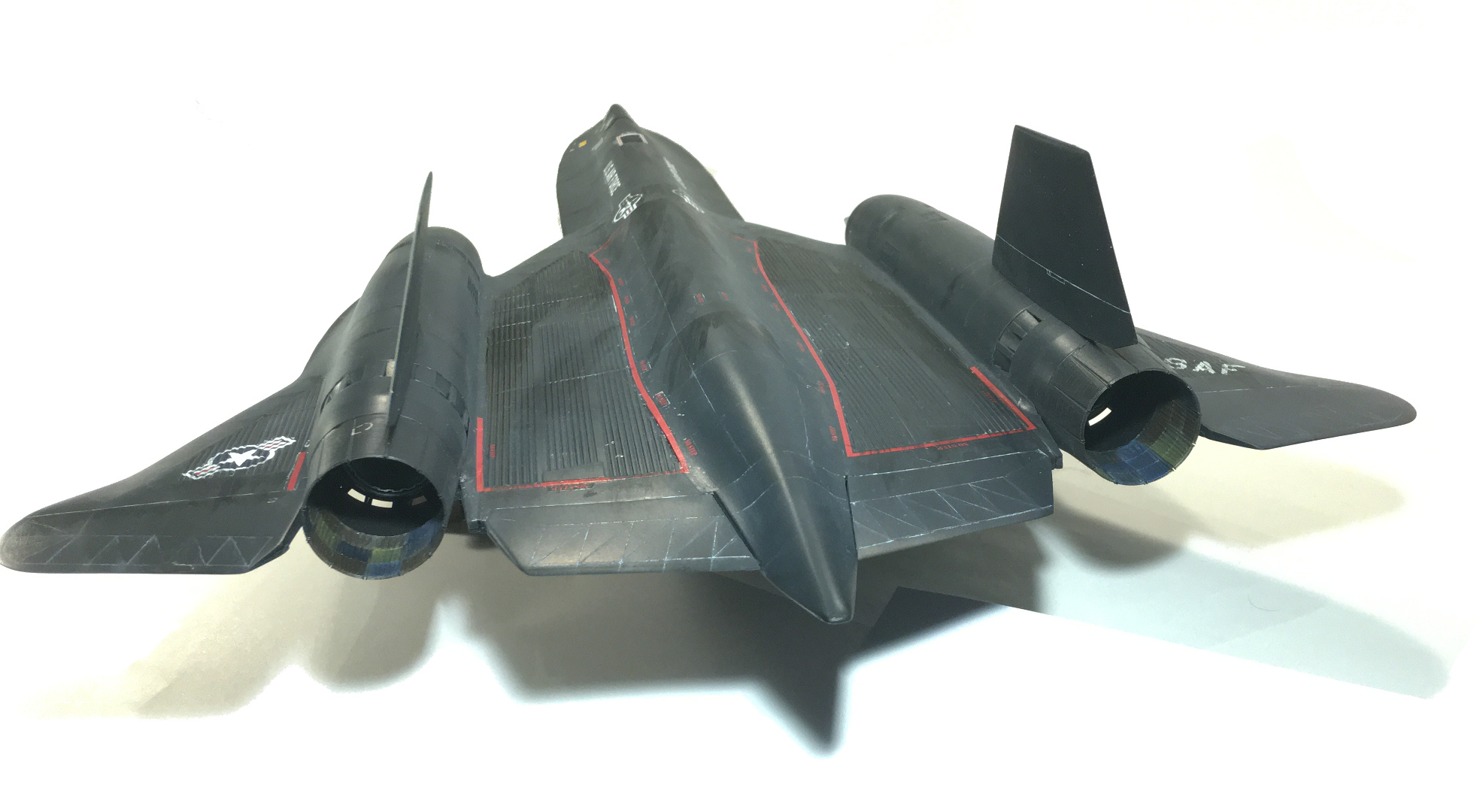 This kit is Italeri’s 1/48 SR-71 dating from 1982, which I acquired in an early 90’s Testors box.  When I told people I was intending to build this, the overwhelming response was, “you do realise there’s a new one coming out which might actually be good, right?”

I pointed out to these people that coming out it may be, but out yet it was not.  So I opened it up and had a look at a kit which H.P. Lovecraft would have described as “antediluvian,” “cyclopean,” “millennial,” (that one always makes me laugh), and probably “squamous” for good measure.

The best thing about the kit is that it’s moulded in black styrene which looks good and made some hecking nice looking sprue goo.  The upper fuselage is broken into two parts, with the join at the end of the “neck” section, while the lower fuselage is broken into three.  The tail cone is separate, the engines each include the outer wing part, and the very tip of the nose is separate. 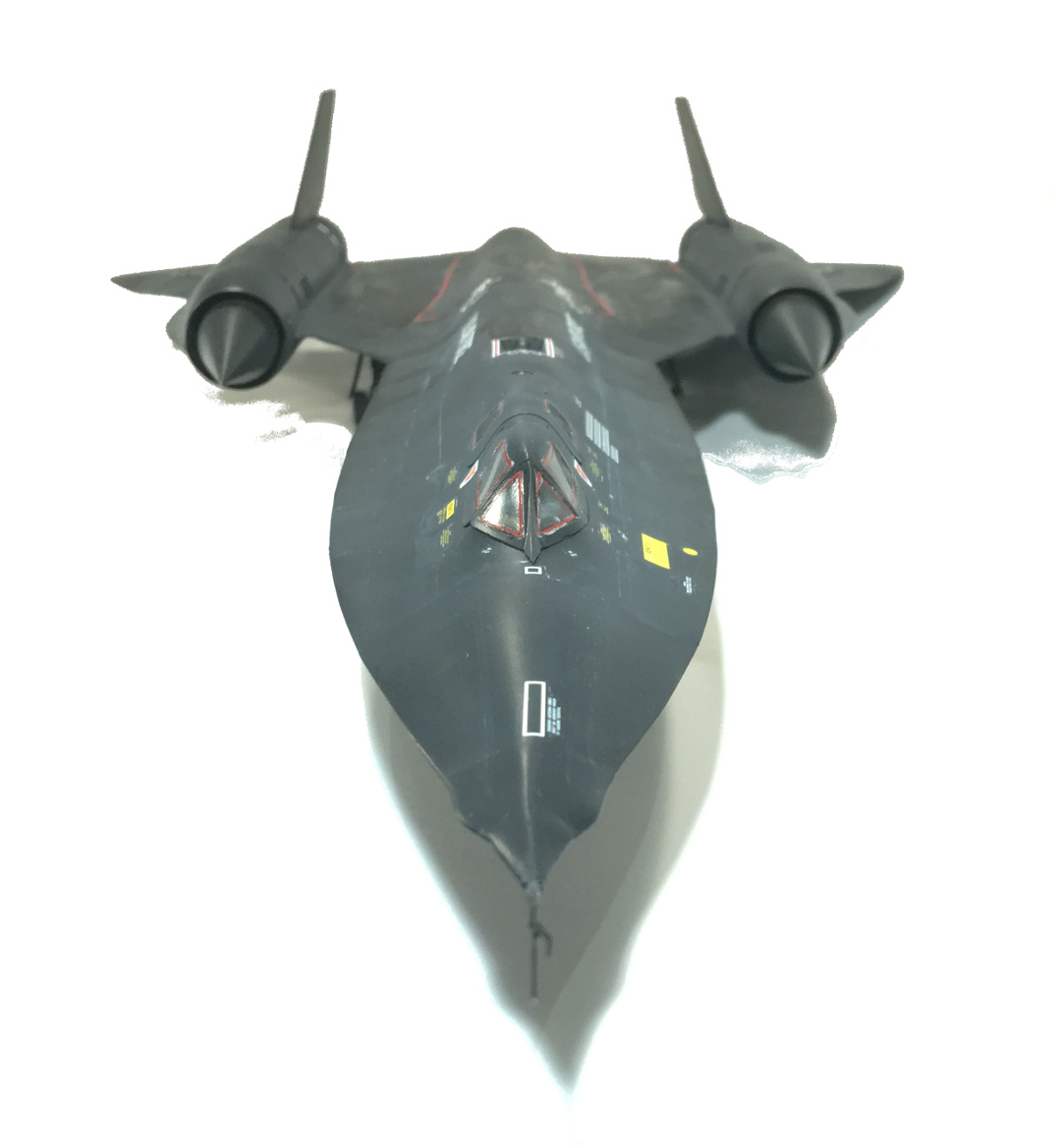 That would be fine if these parts fitted together nicely, but they don’t.  A 2-3mm gap is the norm, and these gaps are often accompanied by steps of 1-3mm.  Thankfully, it’s a very simple kit where there are only a handful of parts to have these gaps on. 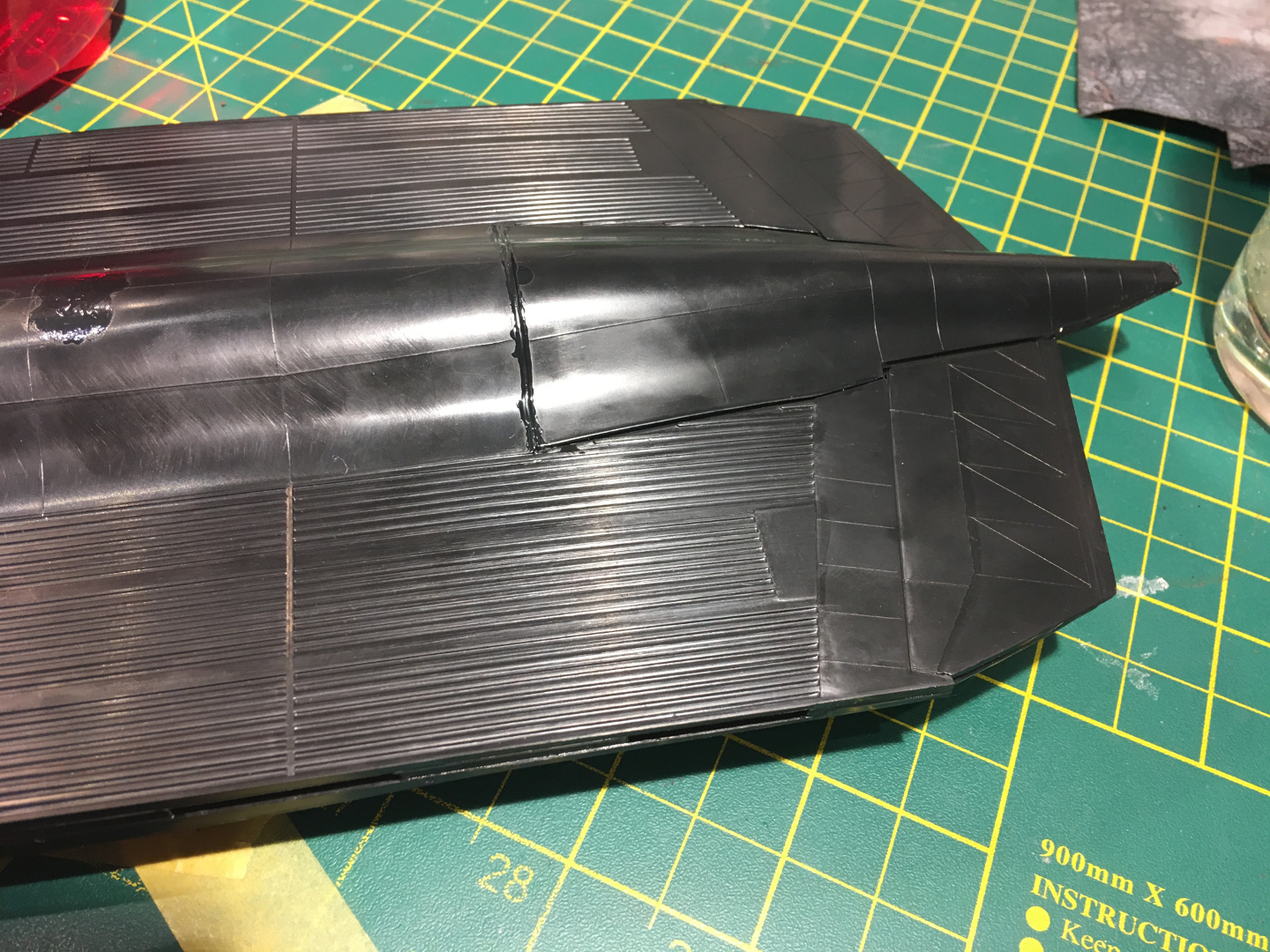 Detail is raised throughout.  Initially, I thought it might be possible to retain that detail (it would not have been once the gaps and steps were filled) but this plan was scuppered by the single most user-hostile design decision I have seen in a kit.  The upper fuselage plate was moulded as its own piece.  No sprue, no runners.  No sprue gates… The injection point was bang in the middle of the upper fuselage.  It’s a centimetre square of messed-up plastic. 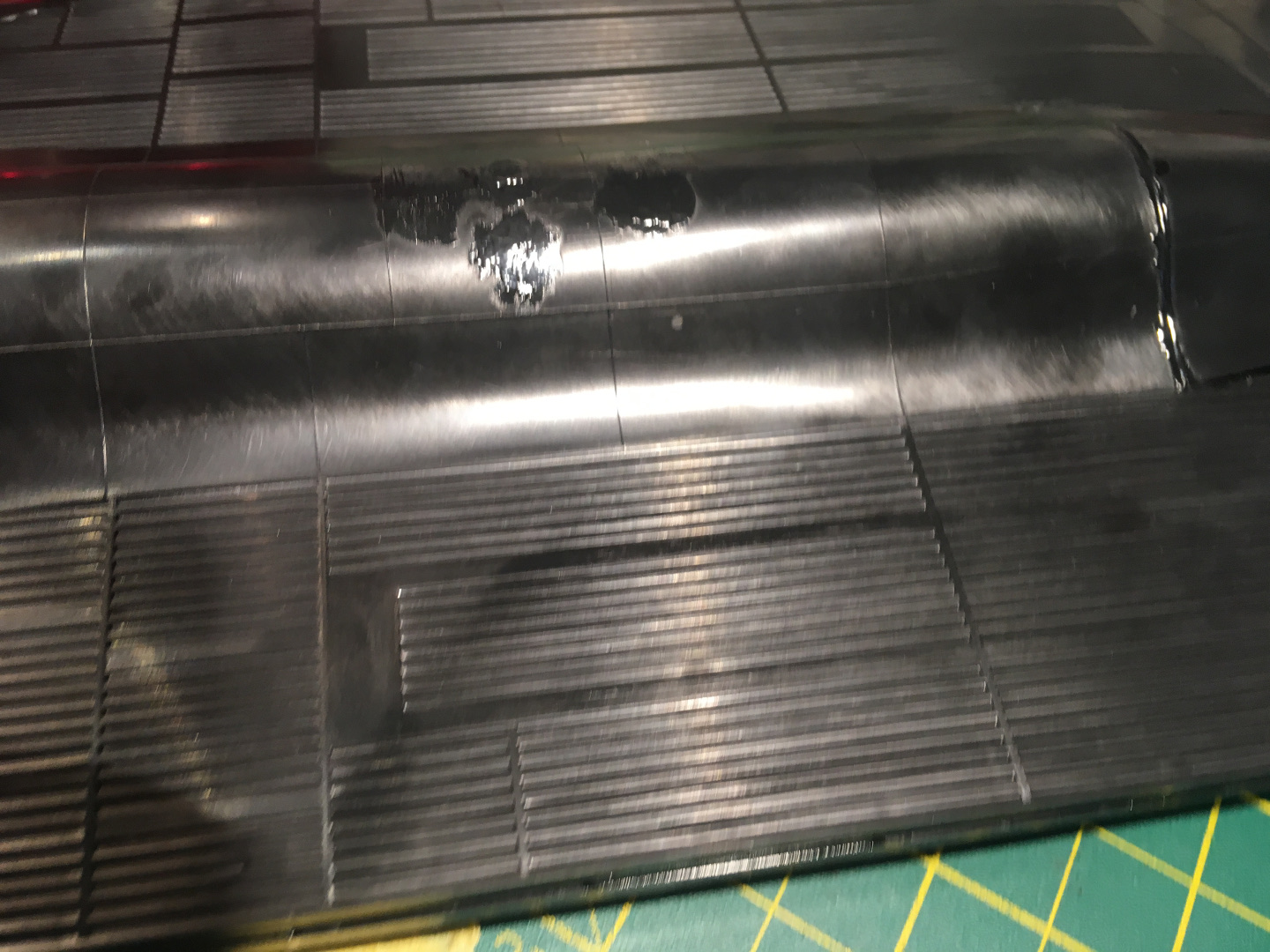 As the kids say, “I can‘t even.”  Even assuming a piece this size couldn’t be moulded any other way (and the lower fuselage plate says otherwise) this is just poor design.  Cut a hole, put the injection point in the hole, and have some huge honking runners for the short distance to the part.  That’s just off the top of my head.

Cockpit detail is guesswork (the instructions are quite clear on this: the plane was still classified when the kit was designed), landing gear and engines basic, but all those parts look to fit reasonably, by its own standards. 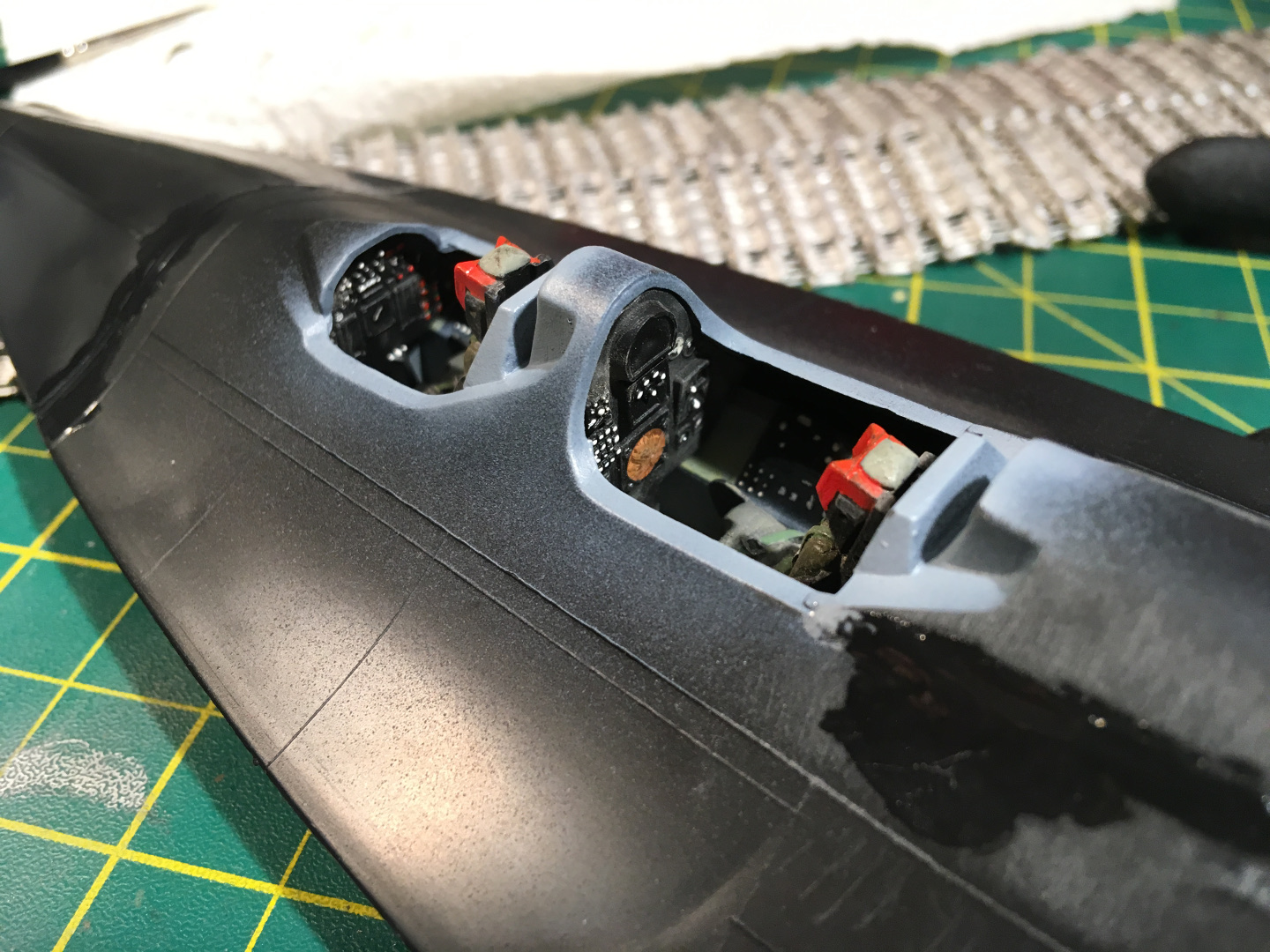 This was a very long sequence of fill, sand, prime, repeat.  I didn’t bother smoothing the joins all the way down as I went, because I was going to have to come back and remove all the raised detail anyway.  The entire surface had to be rescribed, in what I can’t help feeling was a slightly pointless endeavour.  However, my DSPIAE scribing needle was excellent.  At times, drastic measures were taken to get things to fit properly… 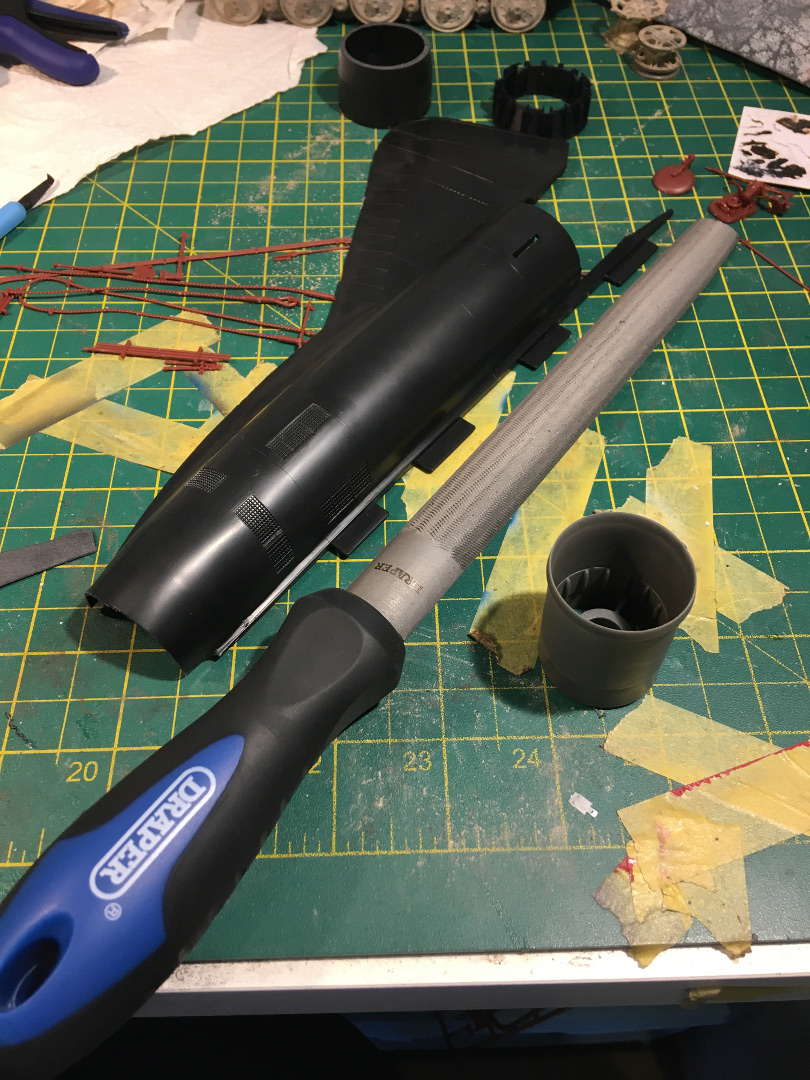 I made the cockpit look as nice as possible with some resin seats from Pavla which were very nice.  The kit ones were extremely basic, and at least this way there would be seatbelts and similar details.  That said, you can’t see much in there anyway. 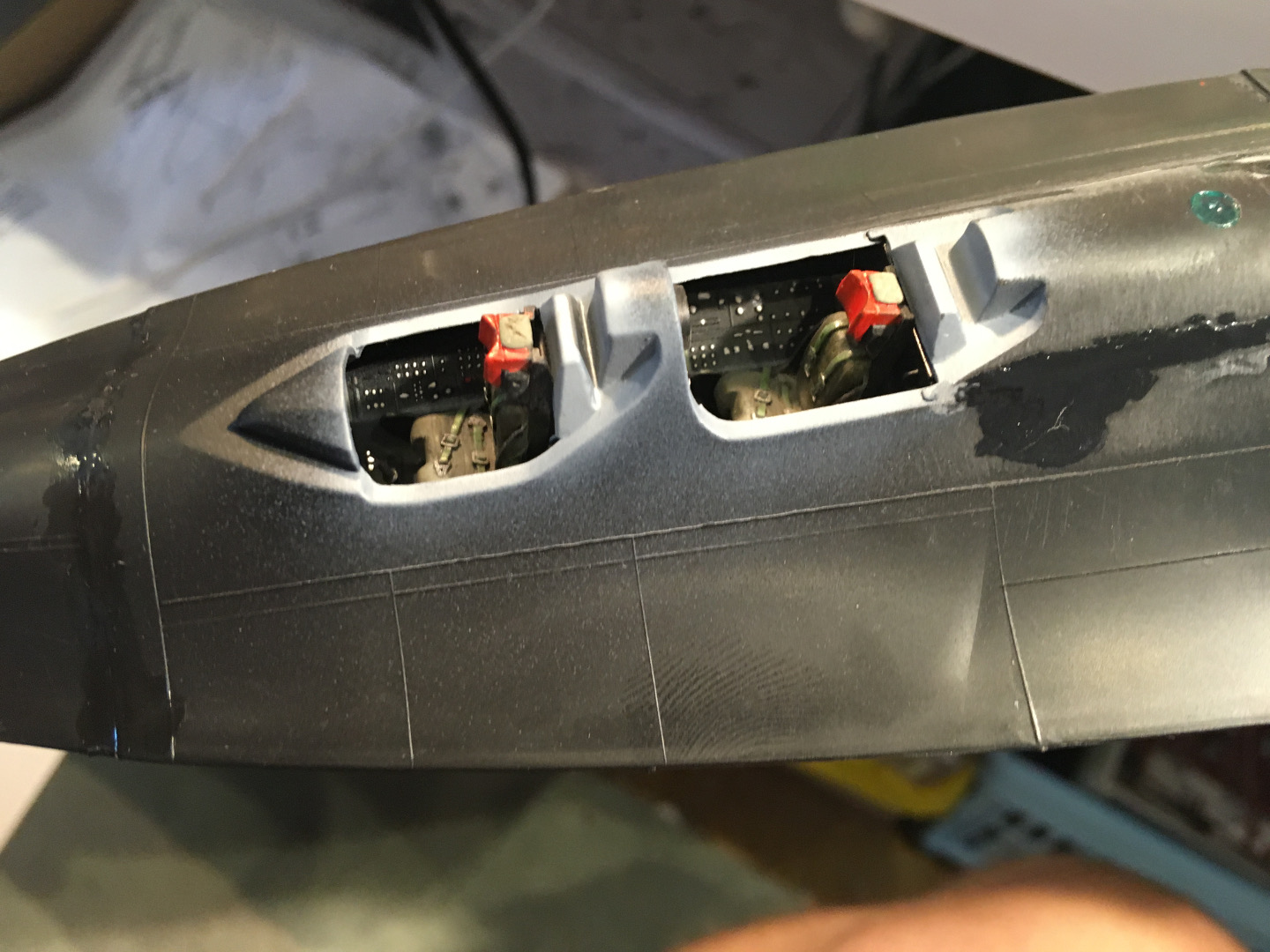 The engines were replaced with resin intake spikes from Metallic Details, and 3D printed exhausts from KA Model.  Both of these are absolutely worthwhile additions over the kit parts. 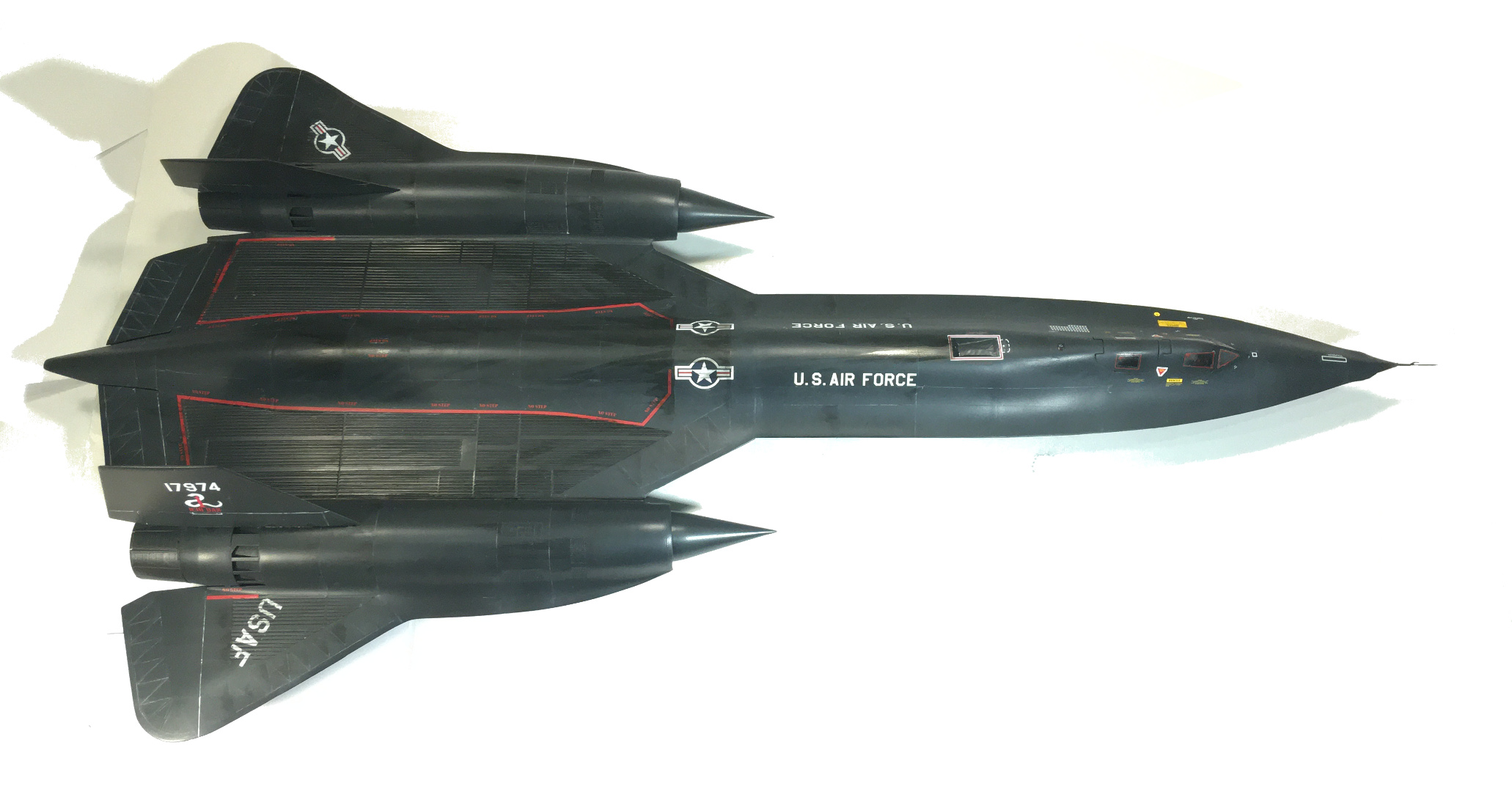 The wheels were replaced with resin ones from True Details, and the pitot with a lovely turned metal one from Master Model.  I think I’ve said this before, but you just cannot go wrong with a Master pitot, and if you’re thinking of buying just one piece of aftermarket, or trying it for the first time, I think no single thing will make a bigger difference to your model. 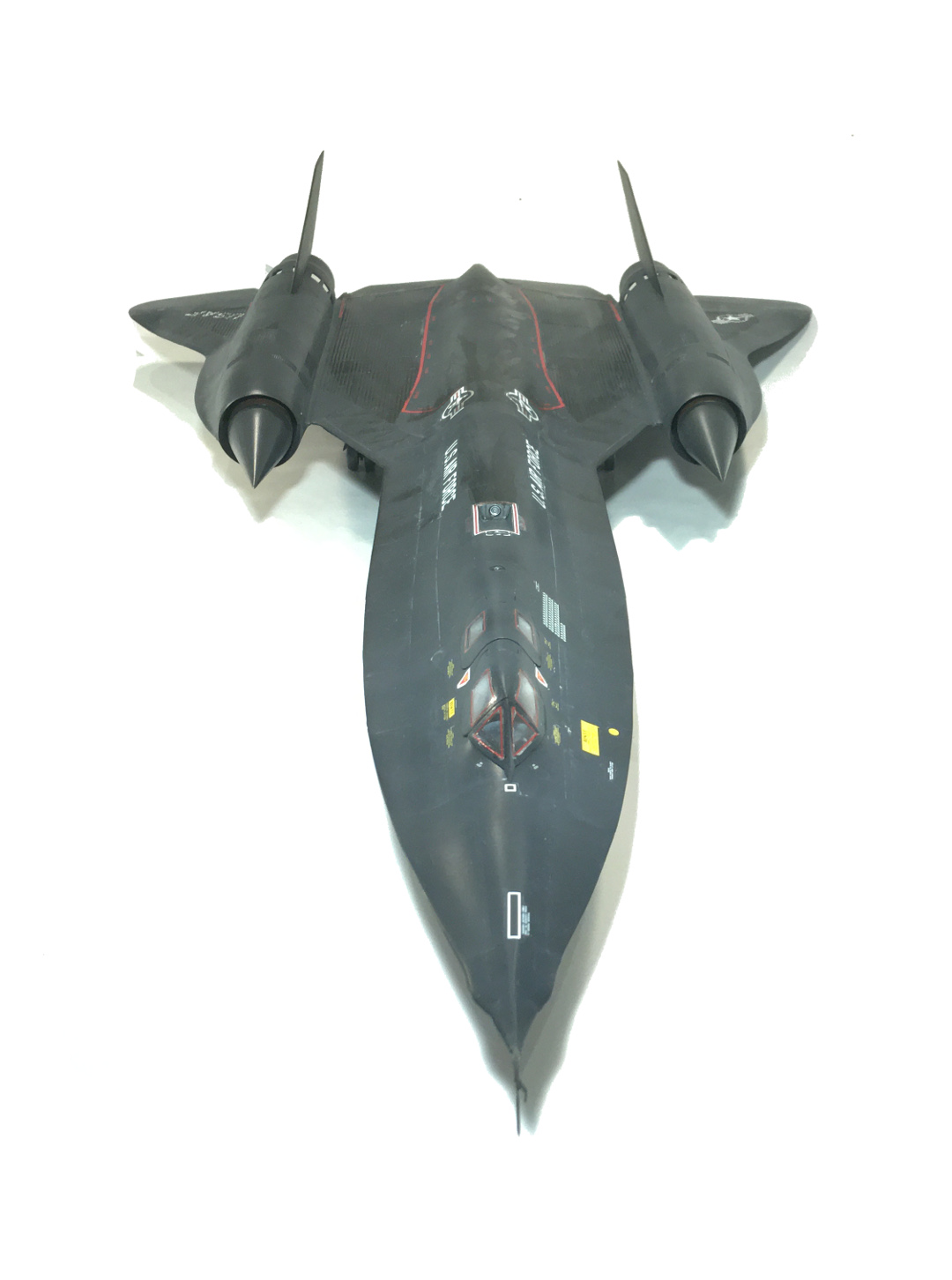 I was a bit dubious about the age of the kit decals, so I picked up the new sheet from Caracal, which was very nice indeed.  Best of all, this gave a huge range of options to pick from, with all the serials, tail arts and stencils.  I chose to build my SR-71 as 974, “Ichi Ban,” which had a particularly high mission tally, making it “number one”. 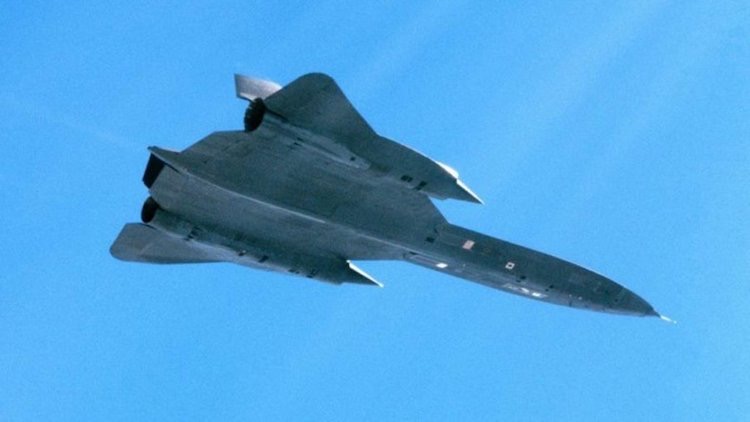 Of course, I didn’t buy this model for the Fun of filling the seams and rescribing: I wanted to have a go at the strange off-black finish these aircraft had. 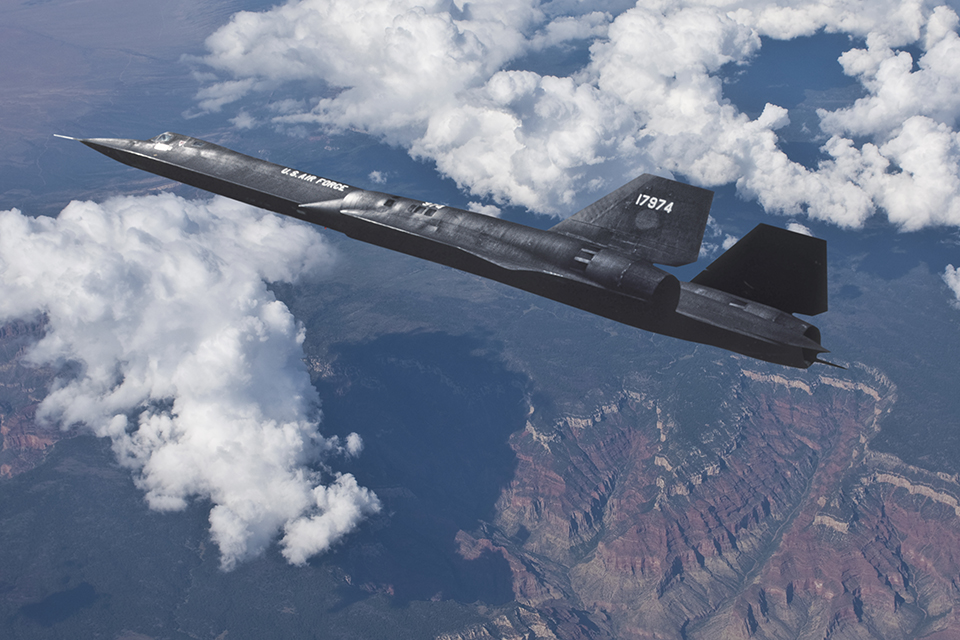 There is a lot of confusion over what colour the SR-71 paint really is.  In many photos it looks almost like a Gloss Sea Blue, while others show a really flat black or even a dark grey.  My conclusion is that the paint is probably black-black, but it picks up a hue from the.  The really blue photos are from out in the desert somewhere, while the UK ones always look grey!  Also, the airframe seems to pick up a lot of grime and dust which appear pale compared to the paint, though this is mostly visible on museum examples.  Flying Blackbirds seem more likely to exhibit staining from oil seepage. 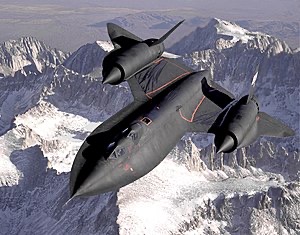 To replicate this, I started with a matte black primer, then marbled AMT-6 Black, RAF Night Camo Black, and Swedish Army Black over the top, all from Mr Paint.  I had intended to use NATO Black and Tank Grey as well, but the NATO Black was too warm-toned and the Tank Grey too light.  Those colours were all blended with a very light coat of more Swedish Army Black.  It’s a great colour for this: a very dark, cool-toned black. 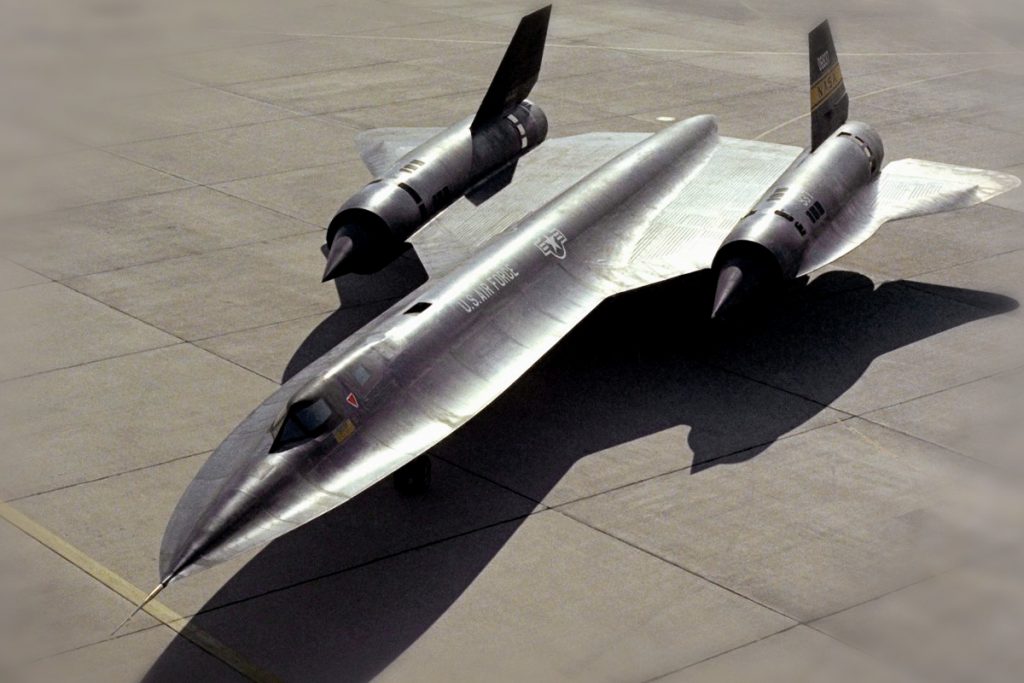 I tried AK Panel Wash for Black, which is pretty good.  It gives a pale grey panel line which is a decent match to ones I had seen in reference photos.  However it doesn’t seem to have quite the same consistency as their other panel line washes, being thicker and not brushing off quite as happily.  That said, by carefully brushing it in the right direction that effect could be integrated quite easily. 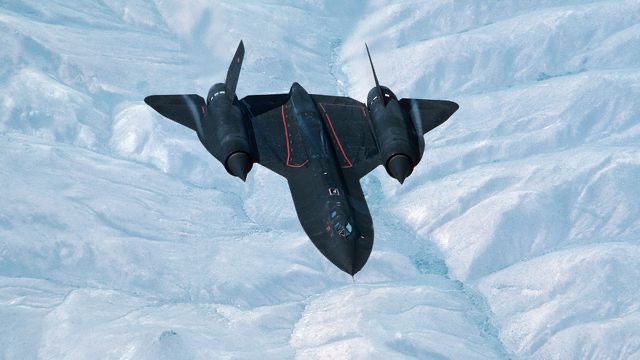 The final effect of note was the fuel and oil stains that abound over the Blackbird.  These were done in three stages.  First, AK Streaking for Dark Green Vehicles was used to create some streaks which on the black look like oil that has attracted dust.  Second, black oil paint was used for streaks which appear very dark on the real thing.  Finally, Aqua Gloss was used to provide some wetter-looking stains, including the characteristic big fuel splashes down the fuselage plate. 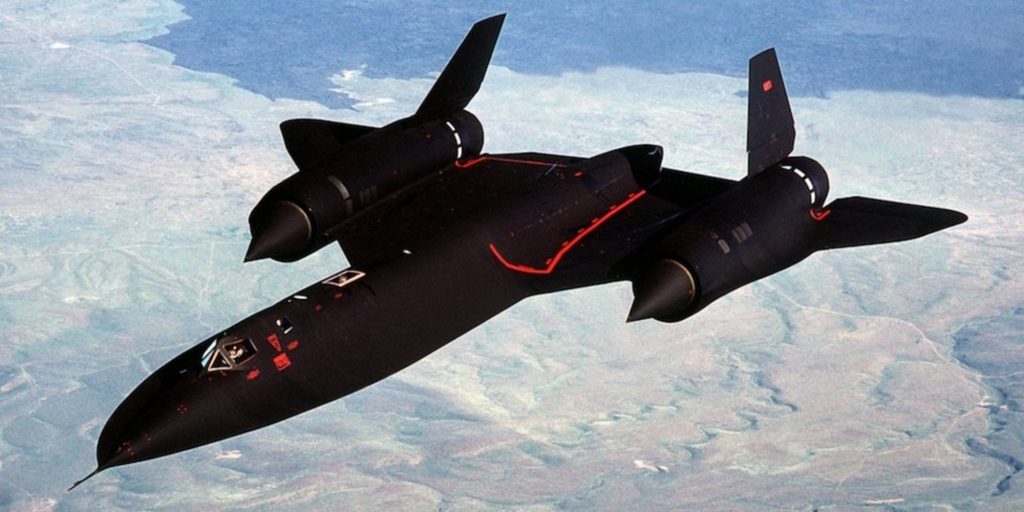 This year, I have built a few kits which required a lot of work.  This was easily the worst.  I’m just glad that it was such a simple kit, as that meant there was the room to fix problems and few enough parts that there weren’t too many seams to fix.  With this aspect of modelling being by far my weakest, I probably should have waited for the new tool one. 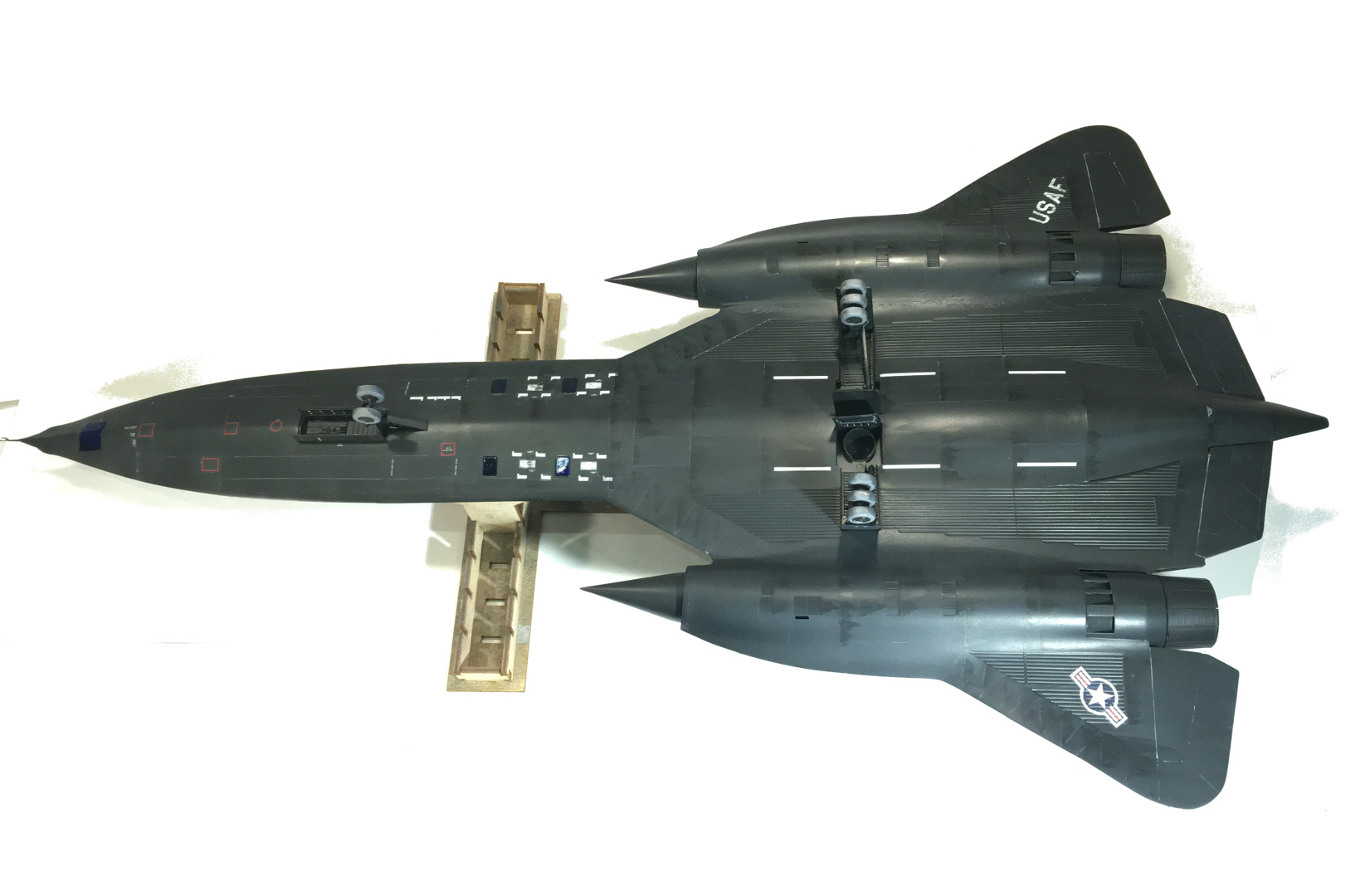 That said, I have a stunning (and huge) Blackbird on my shelf, and a very nice group build entry.  If you’re wondering about size, it’s about twice as long as a Flanker in the same scale.  About the same length as a really big battleship like HMS Hood (~80cm) in 1/350. 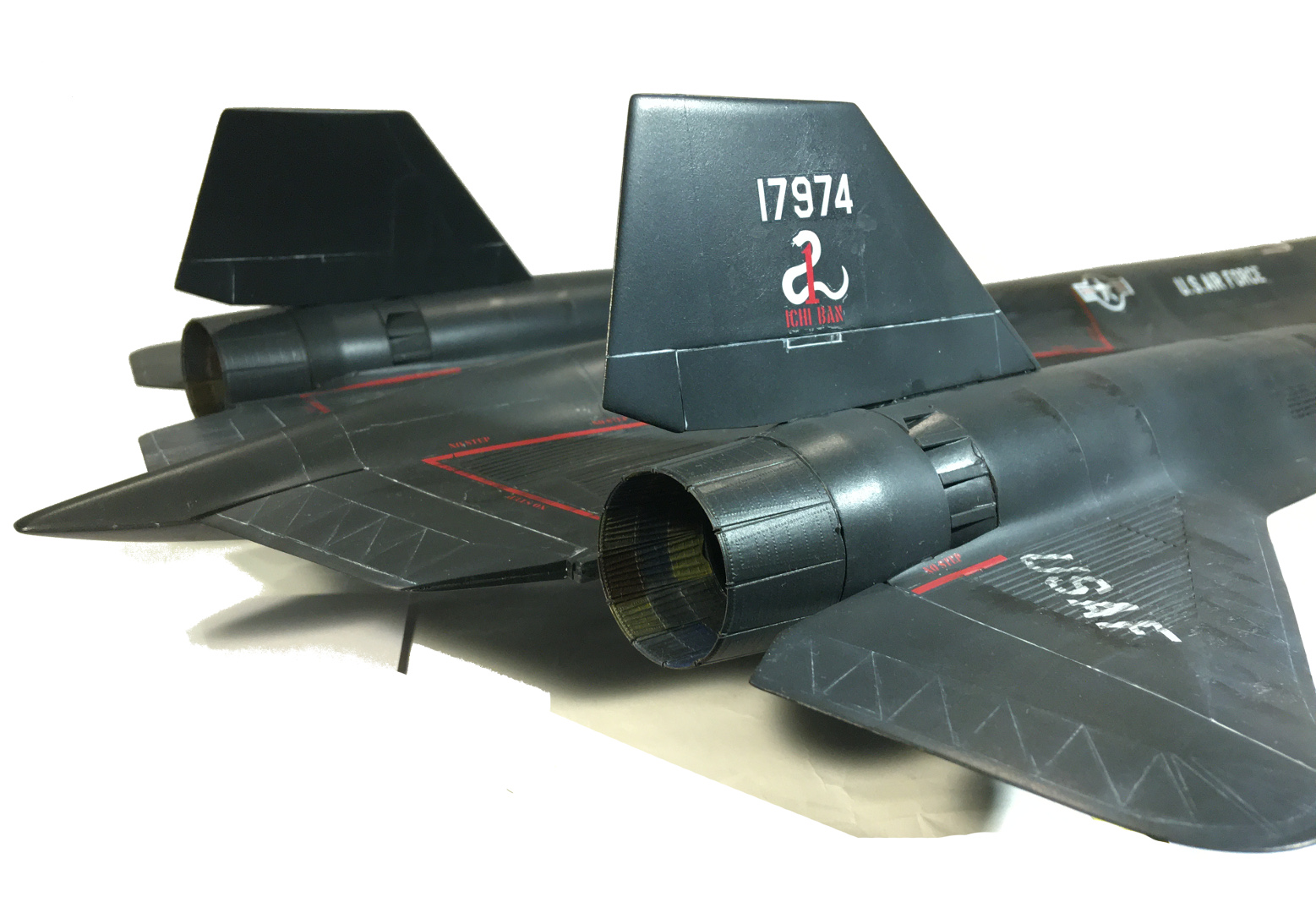 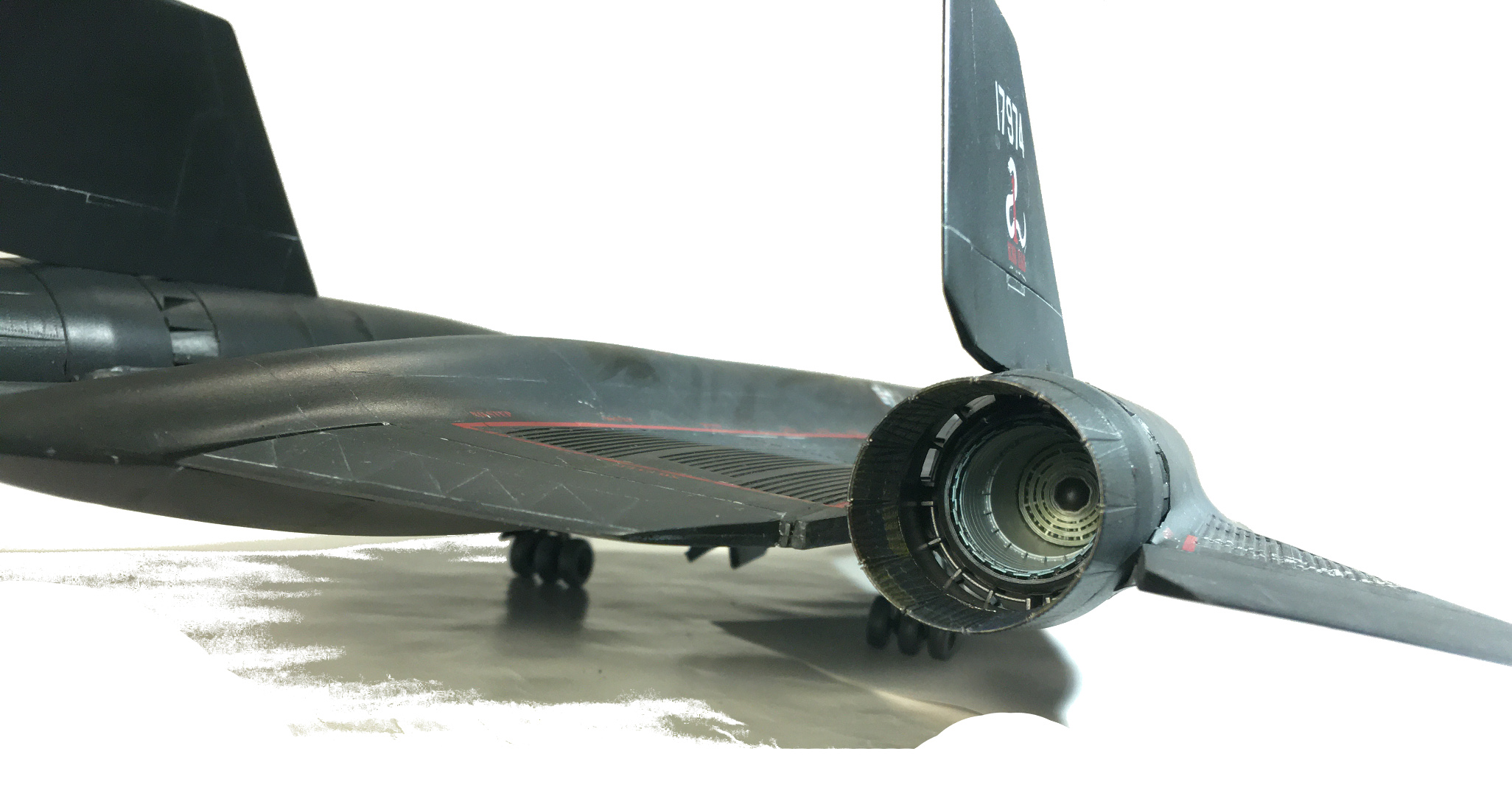 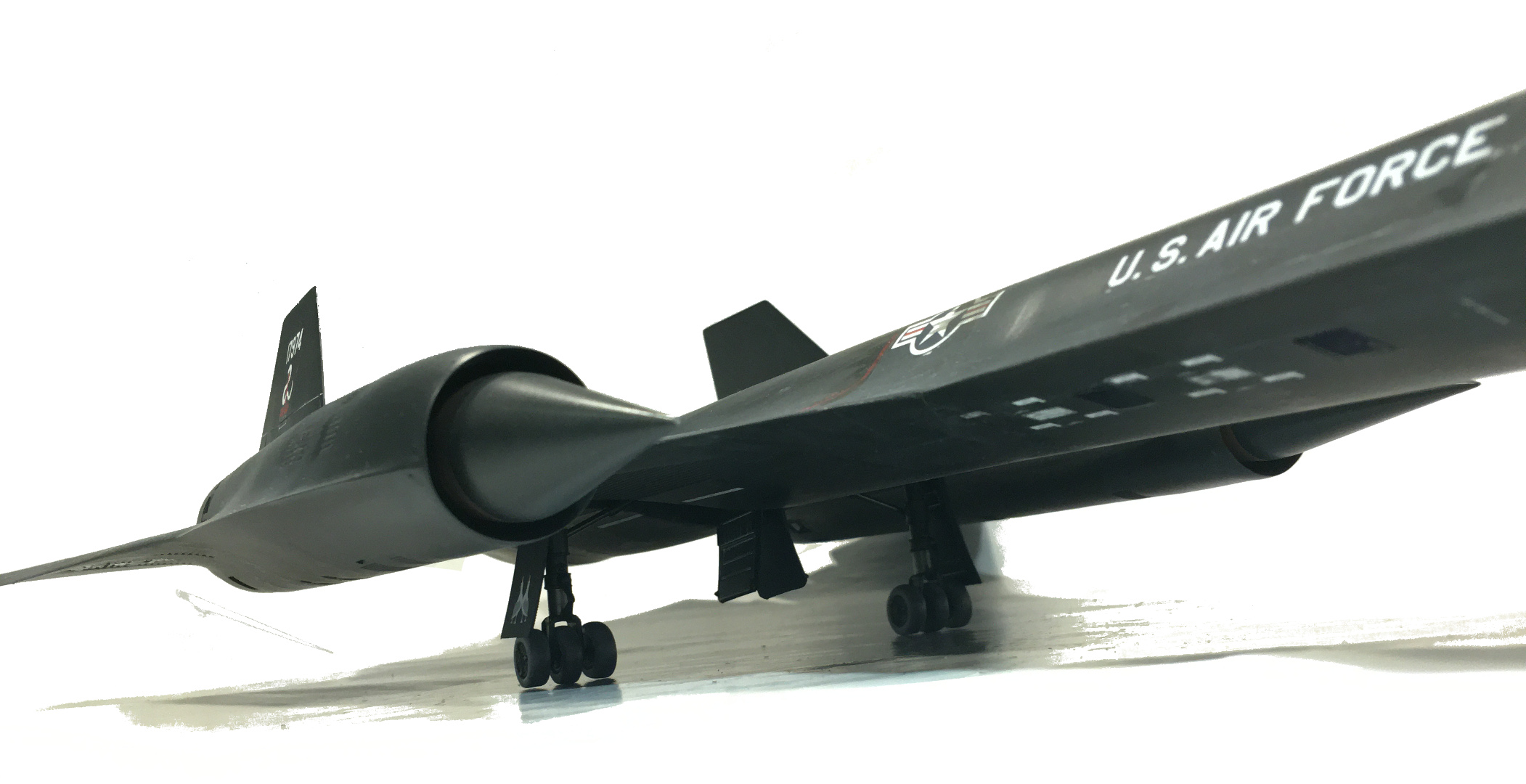 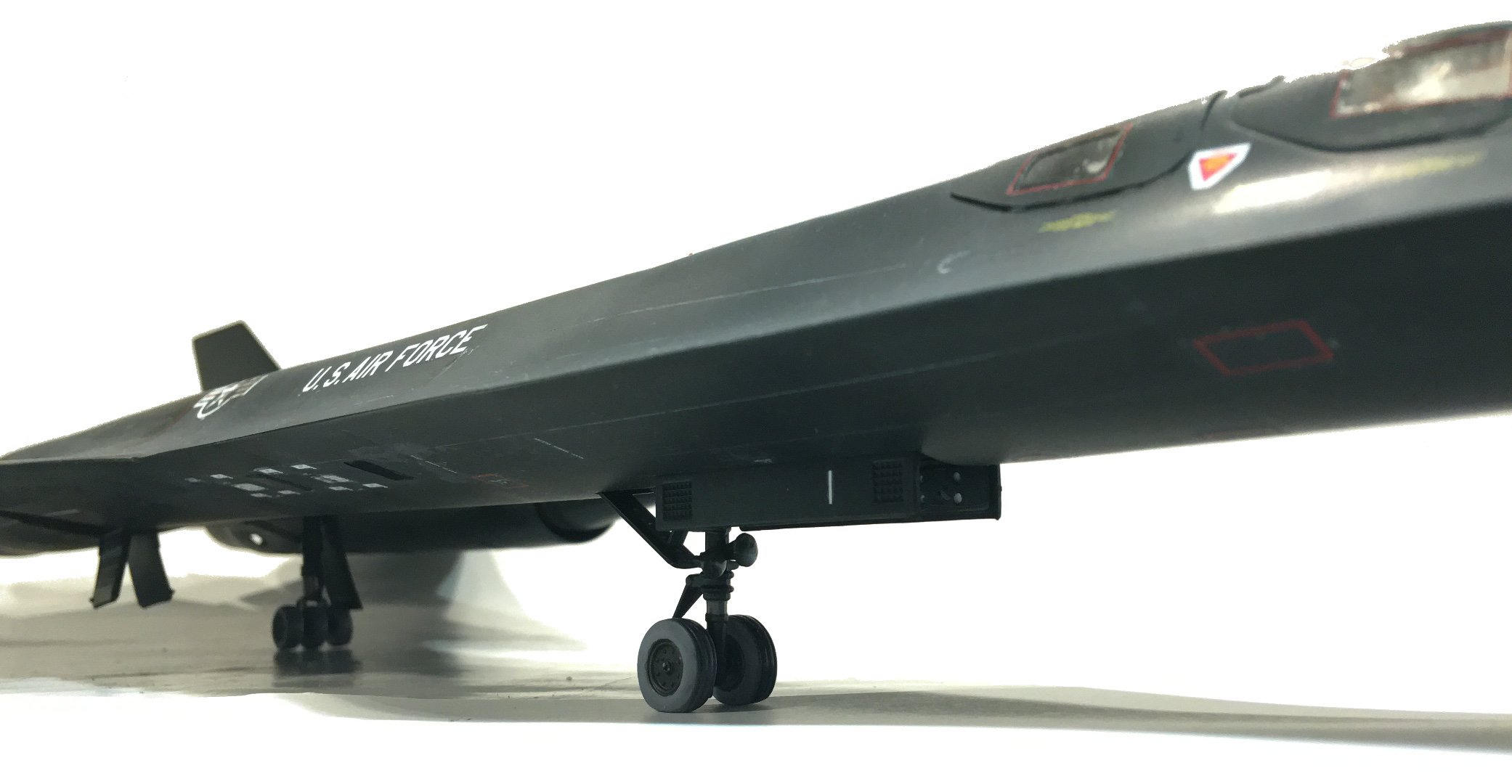 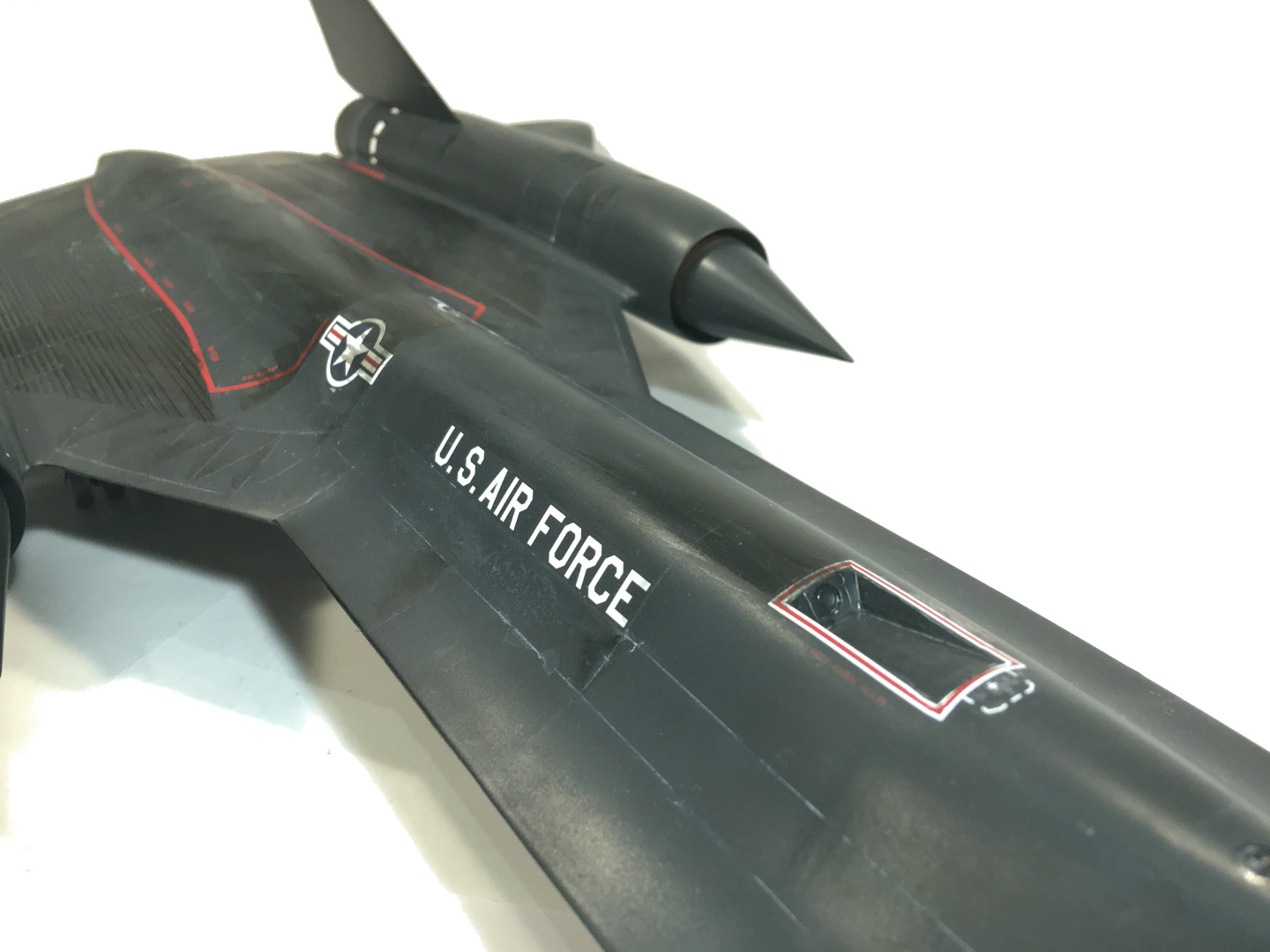 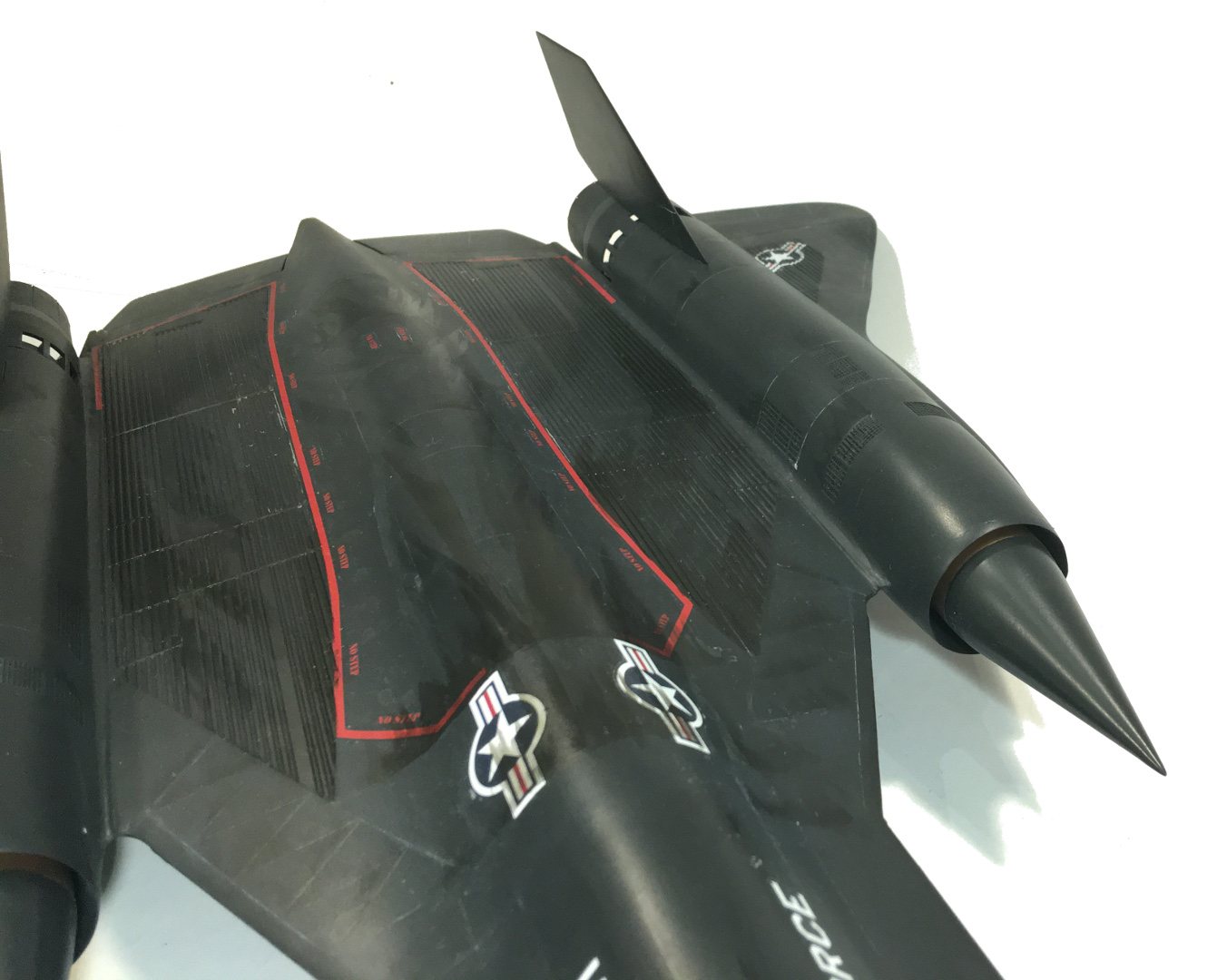 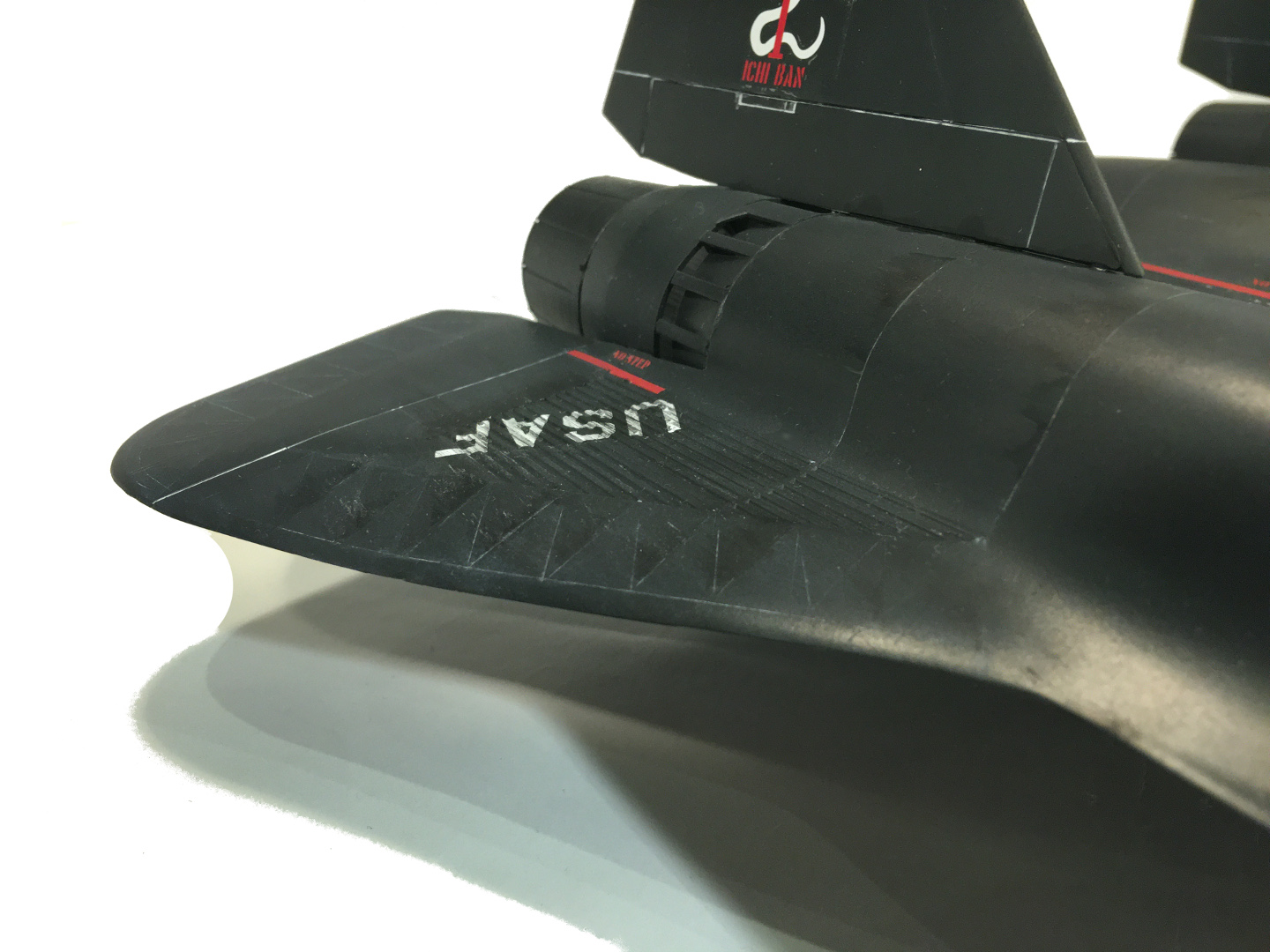 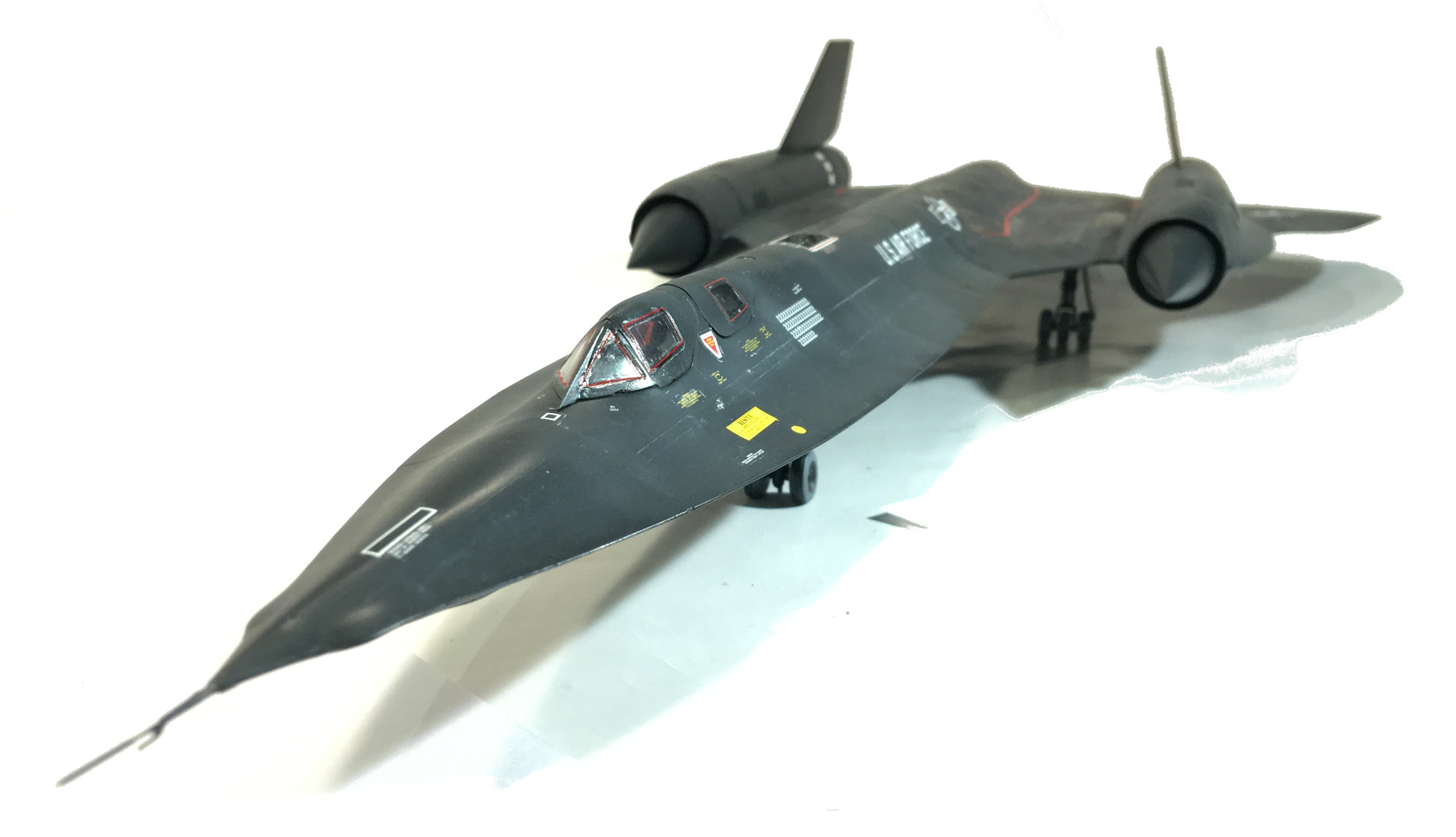 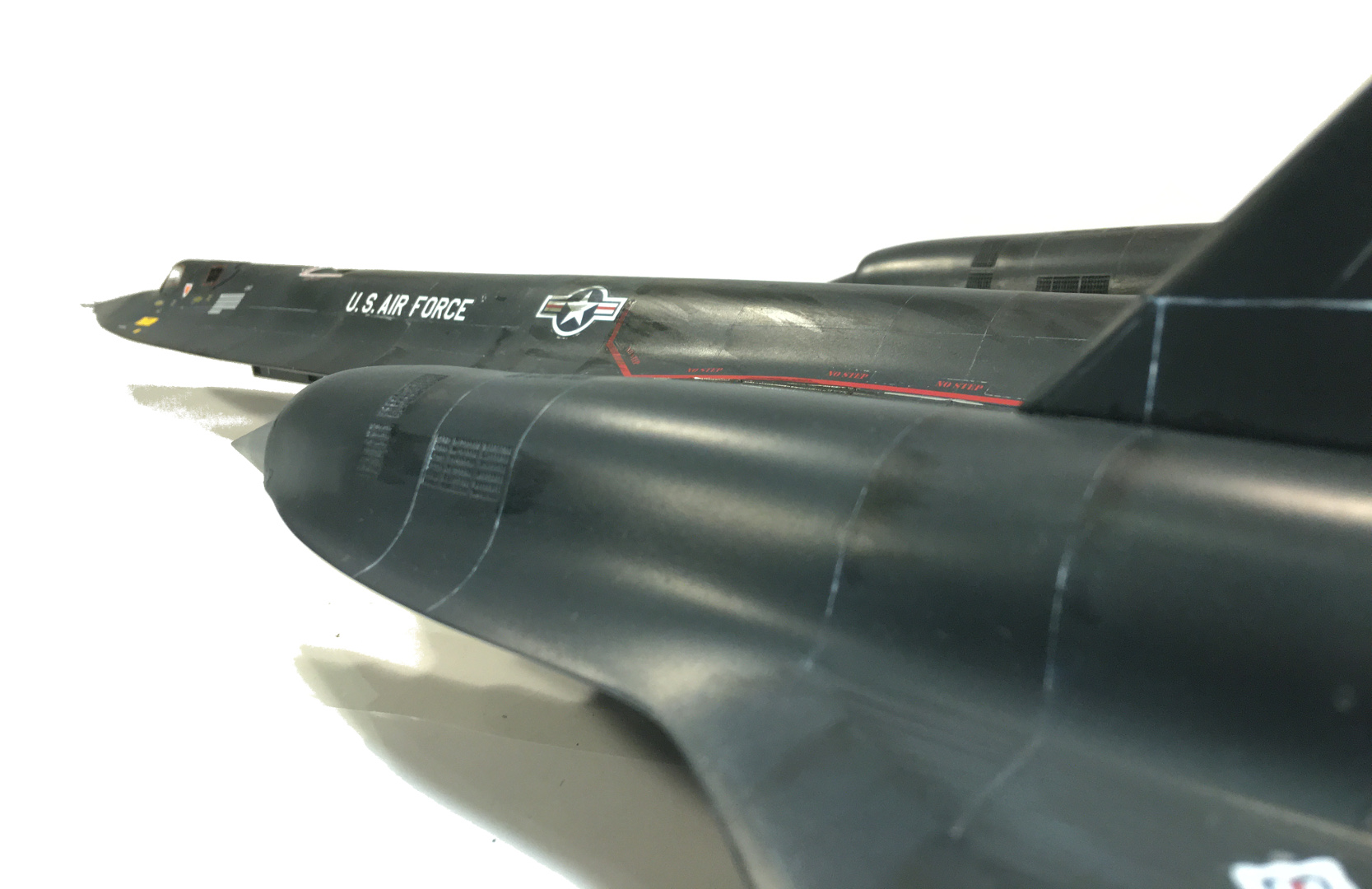 I wish your images were clickable and lead to much larger images. My old eyes and small pictures like this do not get along well. Other than that this looks wonderful.

It turns out my images weren’t being published in full size – I’m making sure they are on new posts, and going back through old ones to fix them. Hope you enjoy them better now!