Despite initial misgivings, this kit turned out to be something of a diamond in the rough.  Nothing about this kit suggests it should go together well, yet somehow it does.  Read on for my first encounter with Kinetic.

Remember that Trumpeter 1/32 MiG-17 I build for the Early Cold War group build over on Facebook’s Cold War Model Making and Photos group?  This was my second entry, and after the MiG, I was concerned this would be another nightmare.

Things don’t start too well when you look at the sprues.  The outside of the parts are quite nicely detailed, but very little care was paid to the insides. The ejector pin marks are huge, and sometimes visible. The sprue gates are the biggest I have seen, and mar the edges of the parts. Fit isn’t bad, but it isn’t great either: part height and depth seems to be the biggest problem, where one side of a seam or inserted part is a millimetre or so higher than the other. 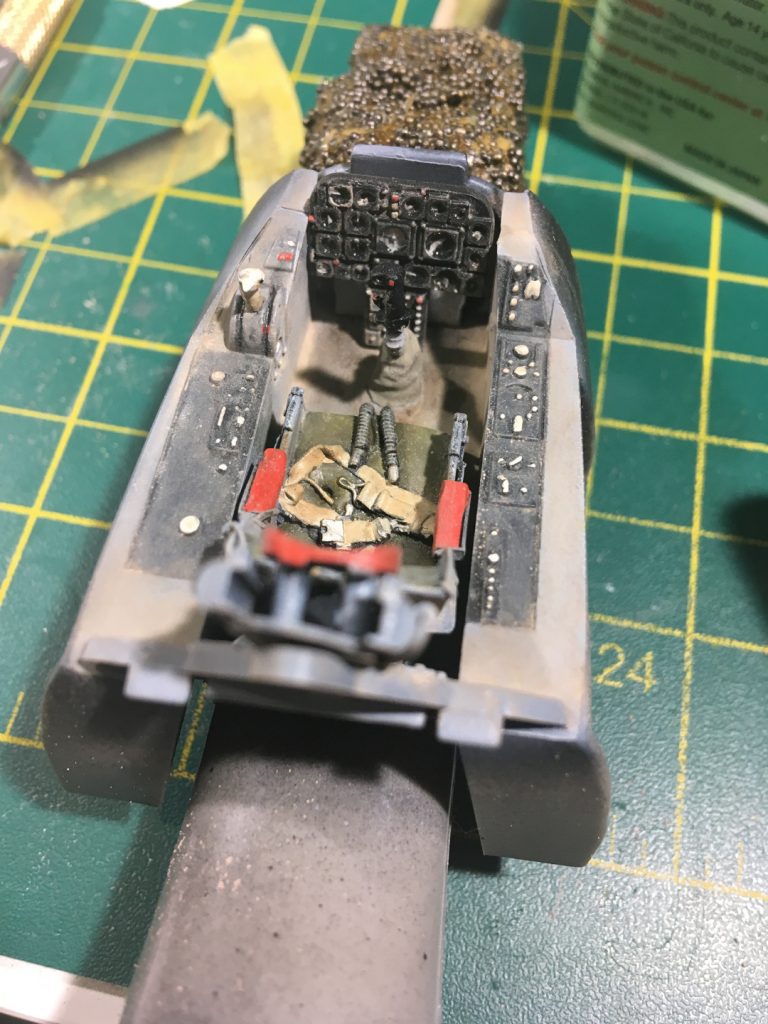 The cockpit had barely any detail at all, apart from quite a nice instrument panel which I used.

I bought a full resin replacement cockpit (Avionix), which did the delightful trick of requiring extensive surgery on the kit parts in order to determine that it was in fact a steaming dog turd (technical term) that didn’t come within visual range of any two parts fitting together. The cockpit tub is nice, with more detail than the kit one. In fact there are details which I cut off and stuck into the kit cockpit. The problem is that it doesn’t integrate with the kit, at all. The kit tub joins to the gun bays and this assembly locates the cockpit and intake trunk in the fuselage. Once the kit tub is removed, the resin one is not the right depth to replace it and does not fit the gun bays. Replacement gun bays are provided but these have no locating points at all. I spent a while test fitting it and going, “how am I going to assemble this?” before deciding that I would get a better result with the kit tub. 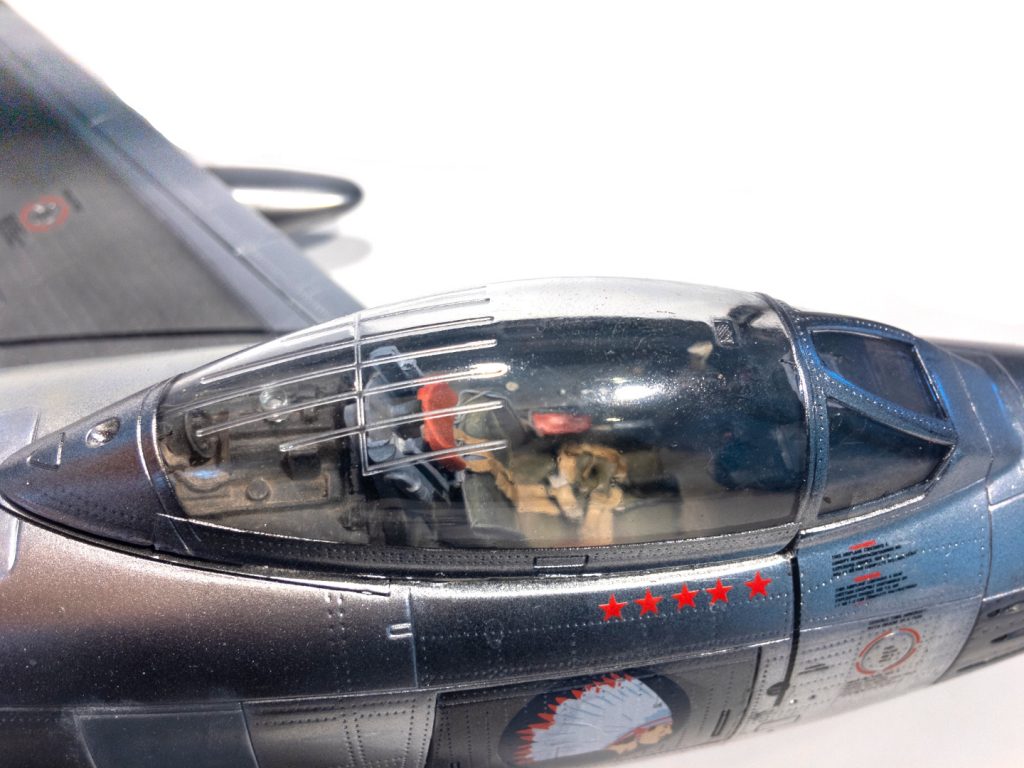 The parcel shelf is much nicer than the kit part, with crisper detail. Unfortunately, it is both too narrow and too wide (basically it’s triangular rather than parabolic) and fixing it would be more trouble than it’s worth. Some of the add-on details can be salvaged.  The control column is much nicer than the kit one and was no bother, so that’s in.  The pedals were no improvement so I stuck with the existing ones.

The resin instrument panel is nice, but I couldn’t see enough improvement to use that instead of the kit part. The kit actually provides two: a single piece plastic one and a decal sandwich one. However, this boxing’s decal sheet doesn’t include that decal. I wonder if it’s the same story for the nose weight, which is called out in the instructions and a little box provided for. 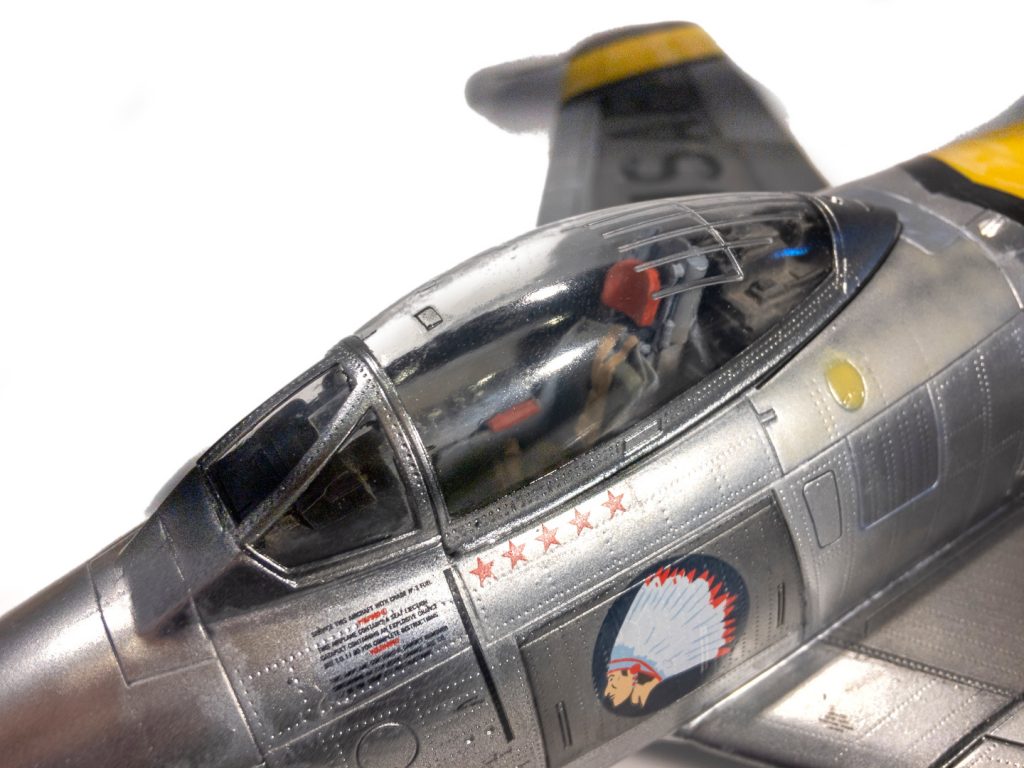 The gunsight and coaming are a nice improvement in detail, but replacing the whole coaming would be a stretch for my skills. Instead, I cut off the kit detail (such as it is) and replaced it with the more detailed gunsight and what I think may be a radio box on the upper right hand side.

The seat is a huge improvement and the set is worth it just for that. The kit seat isn’t bad, but it is devoid of detail. The resin one adds seatbelts and more structural detail. The aftermarket guys screwed up with the headrest though: the casting block connects to the face of the cushion. Since it doesn’t add any detail, I just stuck the kit headrest on. 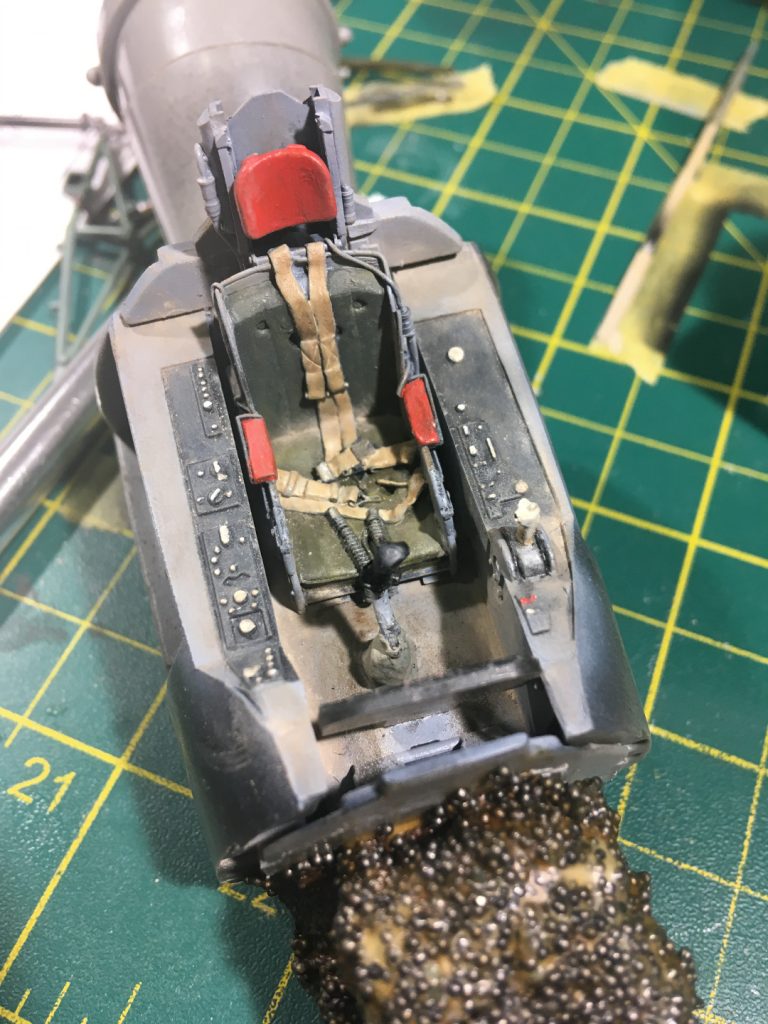 In the end, I had a sort of Frankencockpit which I just painted up as well as I could.

After the last minute problem I had with the MiG-17, this time I test-fitted the seat and canopy, confirming that it should indeed fit.

This kit needs a very significant (but not detailed! Thanks guys!) ballast weight so the gun bays and a handy box just in front of the cockpit tub are all packed full.  I think there was meant to be a weight provided.  This shifts the COG forward of the main gear, and once complete and stood on its wheel the model is stable.

This is another case of over ambitious design where the four-part fuselage is concerned.  Like the MiG, you get the ability to pose the model with the tail off.  Unlike the MiG, Kinetic have actually designed the Sabre so that the tail section fits the forward section.  You need the engine in place regardless.  Although aligning the forward and rear sections isn’t easy, thanks to some insert bulkheads the two will go together fairly neatly.  The shapes match up, and after a bit of sequential gluing (where you glue one bit, then the next, lining each one up as you go) it was OK.  Annoying, but it worked.

The wings were the worst bit of this kit.  I don’t think the leading edge slats were designed to be posed closed.  The thickness is a bit wrong, and they don’t fit especially well (ditto for the airbrakes, by the way).  The wings themselves are also a slightly sloppy fit to the fuselage, but they did go.

Another weakness is the landing gear, in particular the mounting of the struts to the model.  This is done via very shallow holes that manage to simultaneously be too tight and rather vague.

To achieve the very shiny natural metal finish seen on these aircraft, I used Kcolors Steel sprayed over Gunze GX2 Black thinned with Mr Levelling Thinner.  GX2 was applied directly to the plastic.  Now, GX2 is not a primer, but it does go down OK on bare plastic, and that’s the easiest way to get a really shiny finish.  You just need to be aware that it may (may) be a tad more fragile than a primer and treat it accordingly.  This is the same approach used on the MiG-17, though on that occasion I used the lighter Kcolors Aluminium.

Because masking over metallics is a stressful experience, I opted to spray the insignia and markings before laying down the GX2 for the NMF.  These were done using MRP over Alclad black primer. 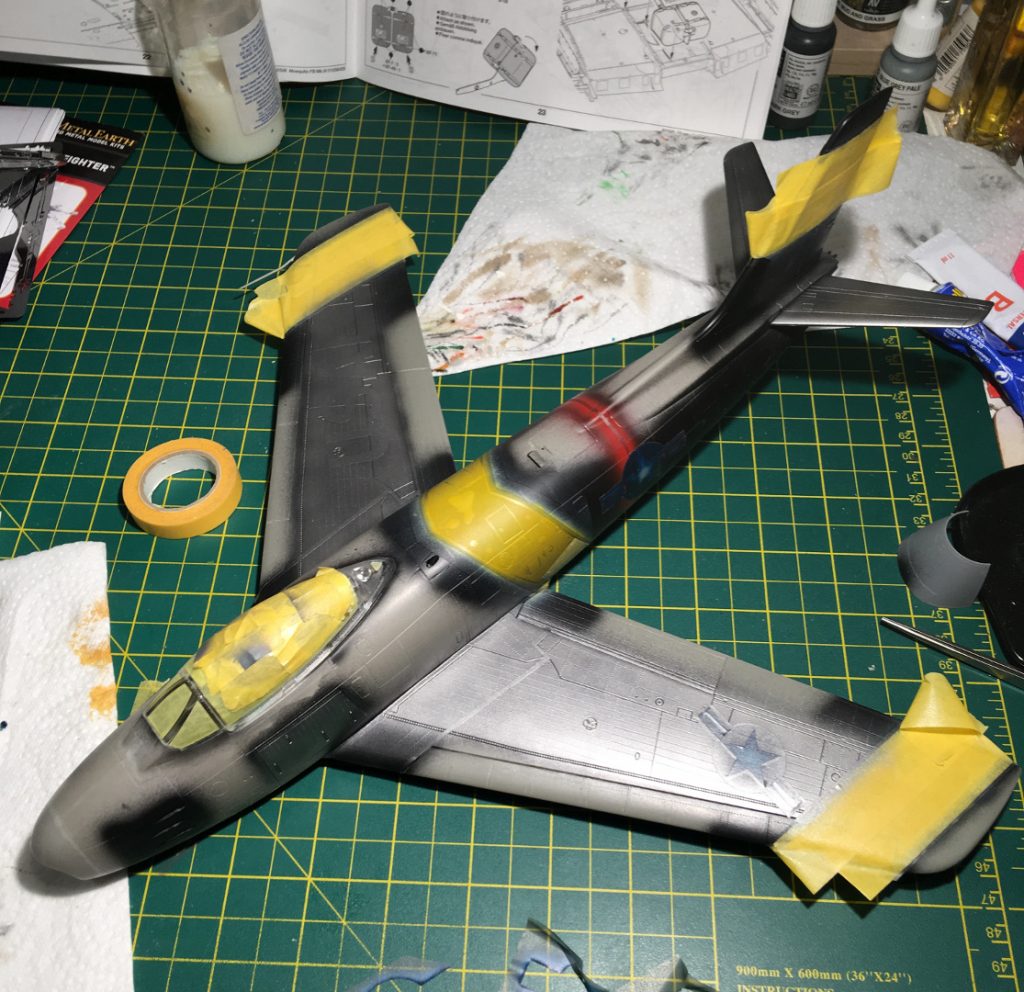 Overall, I’m pleased with the finish, though it didn’t come out as well as I had hoped. One of the reasons for choosing this kit and the MiG-17 for this group build was to gain a better understanding of NMF finishes, which I consider to be a major weak point in my skills. I’m not 100% happy with either, but I’ve learned a lot from both of these and feel better equipped to deal with such finishes in the future.

In particular, learning how to get a shiny finish and a bit of colour variation, as well as figuring out where my normal weathering approaches just aren’t viable.

These jets were generally rather clean, but I have tried to replicate a bit of fading on top of the yellow bands. It’s visible in some photos.

A major step forward for me with this one is that almost all the markings and insignia are masked and sprayed. This was quite ambitious for me, so many thanks to Sean Middleton of Topnotch Masks for both the masks and the support in getting a great finish. Thanks also to Hans-Peter Stark for kindly providing the kit when I couldn’t find one in shops.

I used some decals from Printscale. Don’t. They were too thin, folded up when removed from the sheet, and also didn’t want to settle even with Solvaset.

It’s a decent kit, and it looks nice on the shelf. It’s imposing. I’ve wanted a Sabre model since I was a kid, and this 1/32 one certainly fills that desire in style.

I’ve finally figured out a consistent, reliable way to get a great finish with Kcolors.  As I’ve said before, these are not the easiest paints to use, but the performance is so good that I think they are worth the bother.

Use them unthinned, in a fine detail airbrush.  Mine is a Gunze PS-770, with the 0.18 needle.  Dial the pressure way down, like for MRP: somewhere in the 10-15PSI range, tweak it to get a nice spray pattern.  Now hold the brush much further away than normal, maybe 5cm from the surface.

First, spray very light, very dry, just to start laying a bit of paint down.  Keep the brush moving, painting big swathes and we’ll come back over it after.  Do a couple more very light, very dry coats.  These will help the wetter coats stick.  Once complete, go back over the surface pulling a touch further back on the trigger.  Find the “wet line”, the point at which the paint shifts from landing dry to landing wet.  We want to be right on that line.  Now be very careful to keep the brush moving because this paint will pool and run if its wet.  But we need it to be just wet in order to lay down properly and form a tough finish.  Again, we need to repeat this coat several times.  I’m finding that three coats on the wet line normally works well.

Now give the paint a good 24 hours to cure.  Once cured, and although other people disagree, I find that it is best to put a thin clear coat over it.  Something like an Aqua Gloss.  It’s great paint, and quite solid, but I have had problems with it flaking off sharp curves like wing edges. 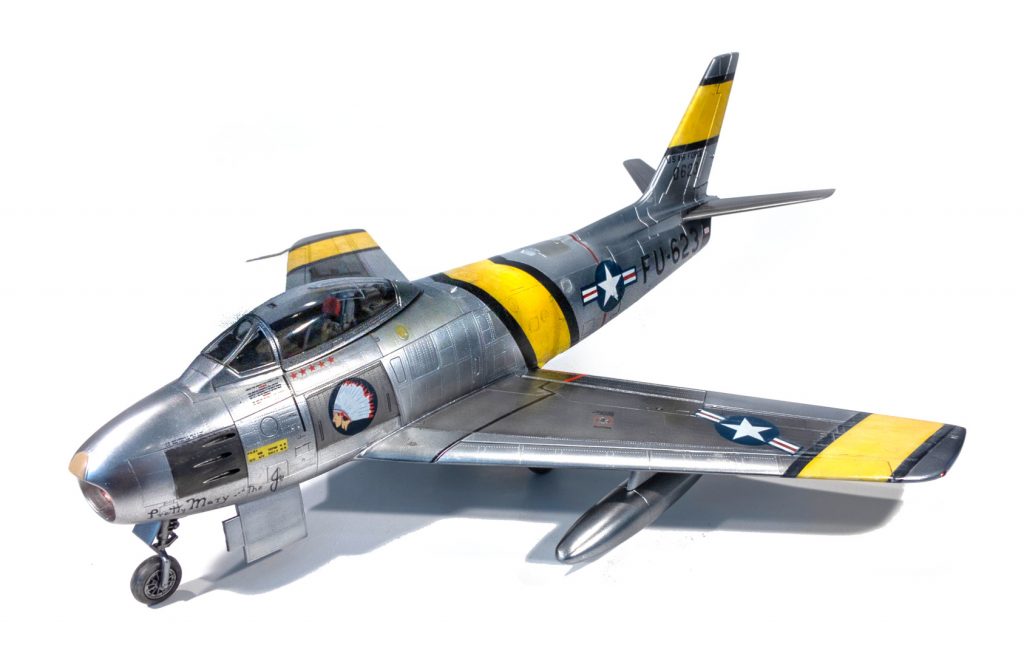 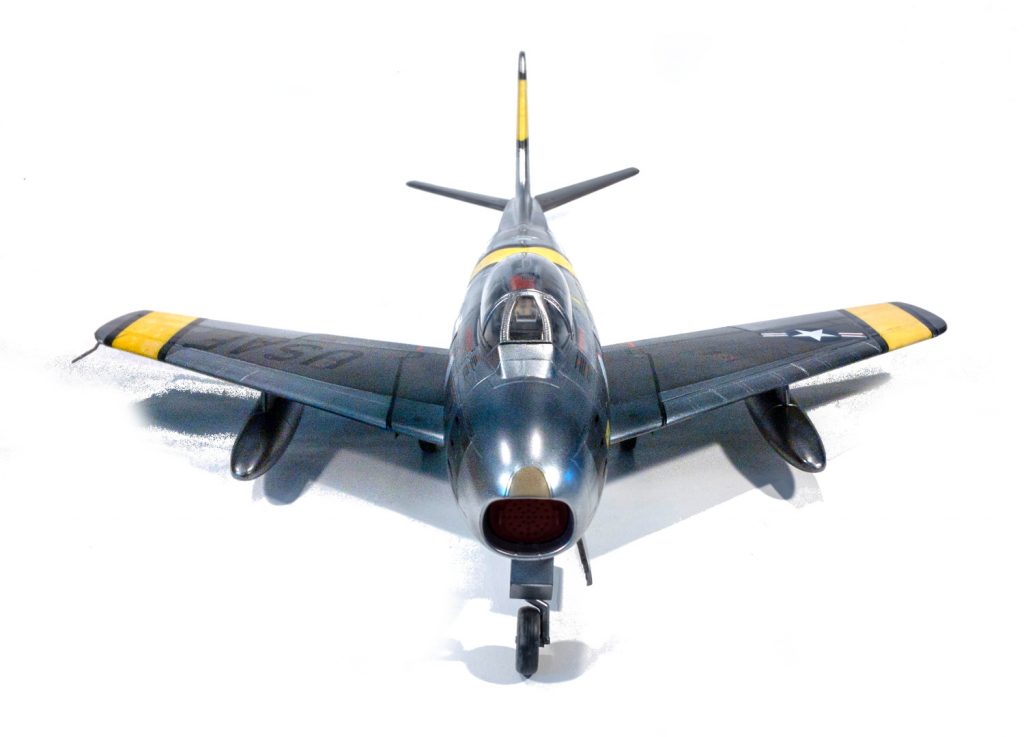 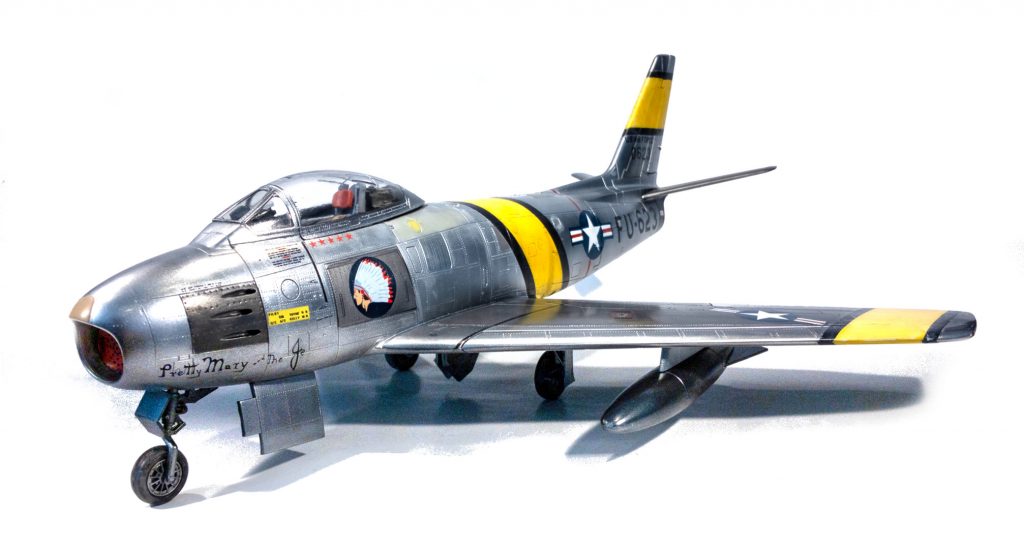 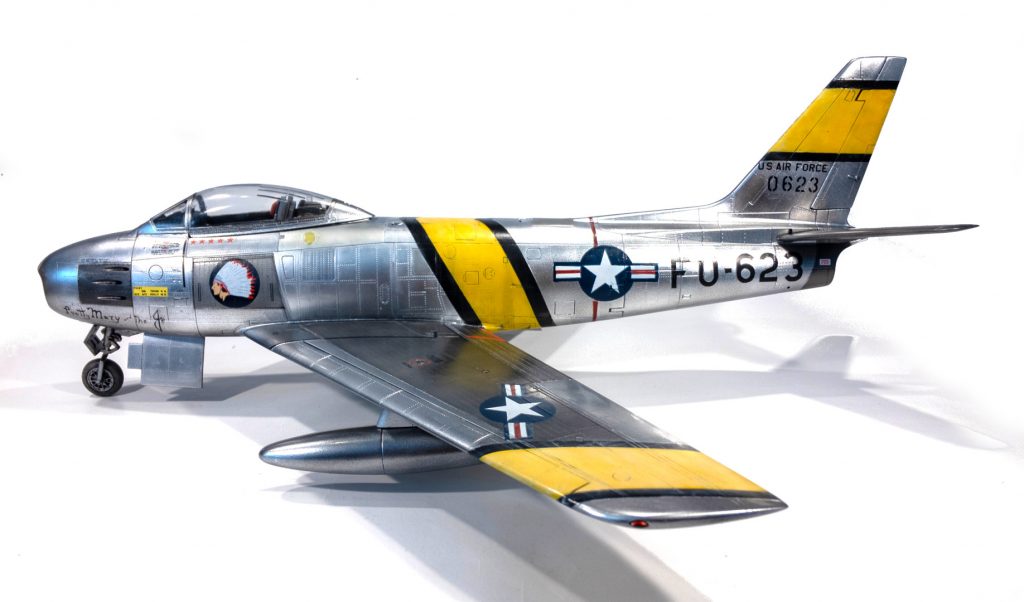 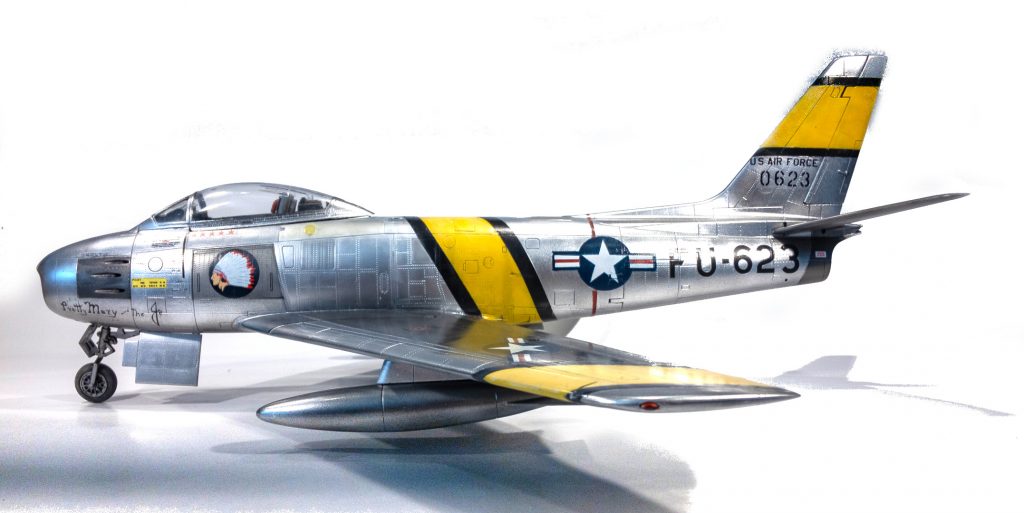 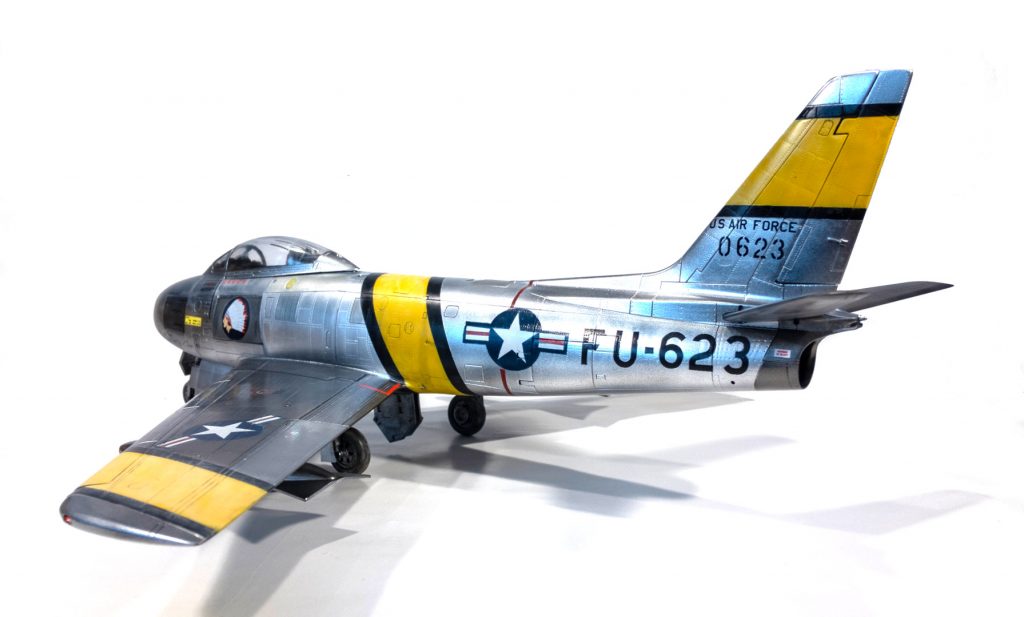 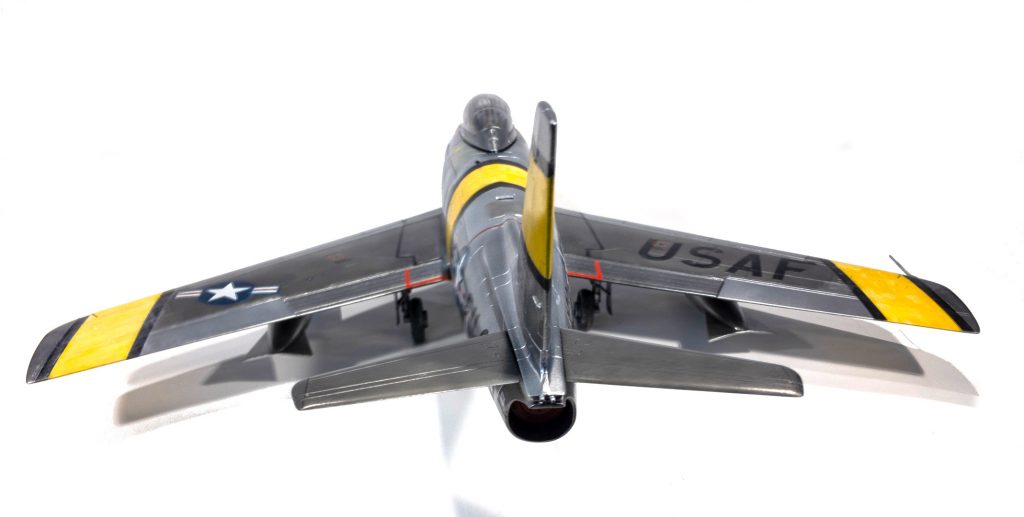 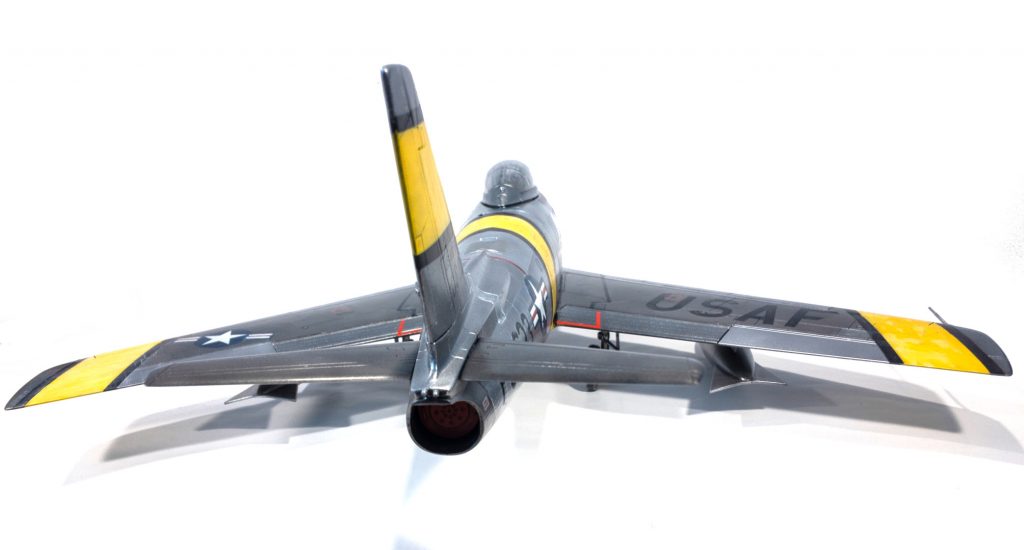 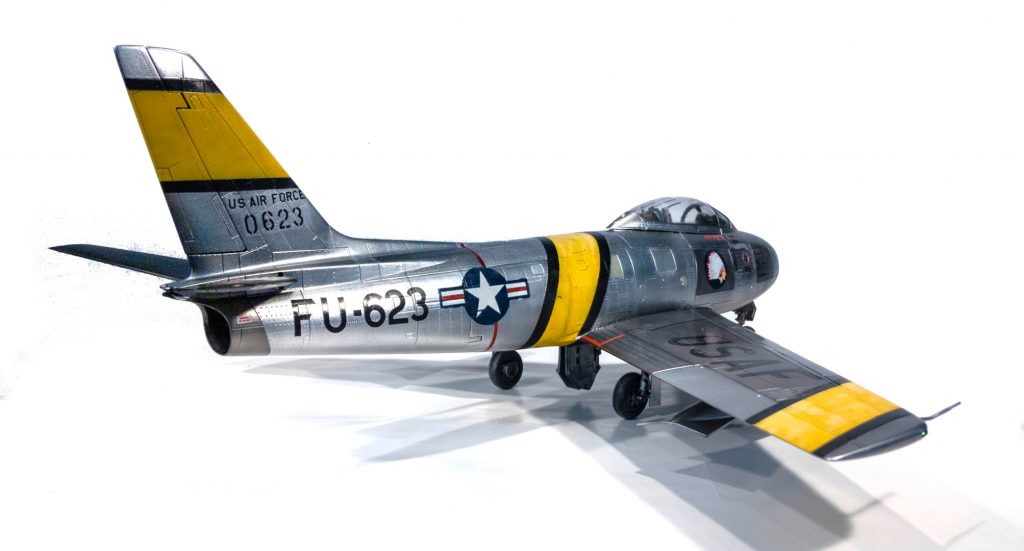 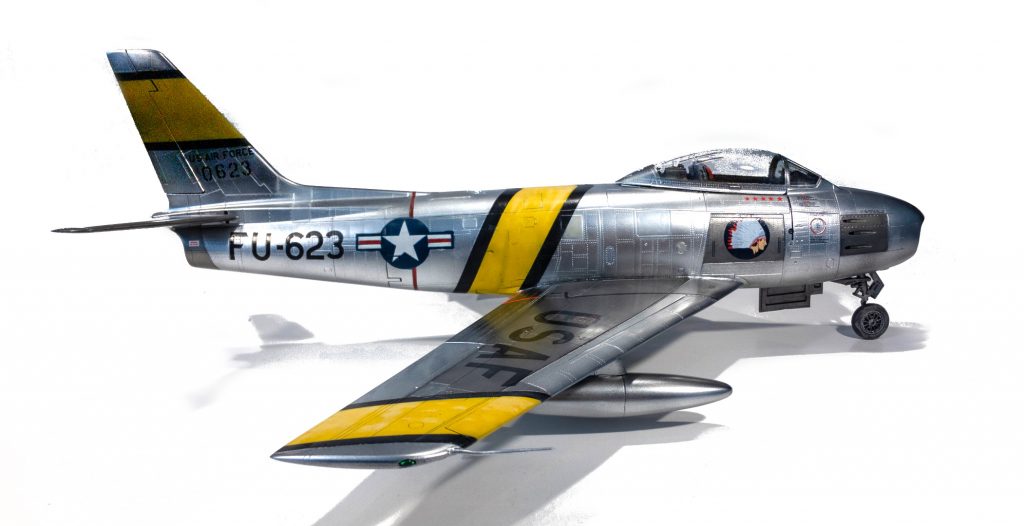 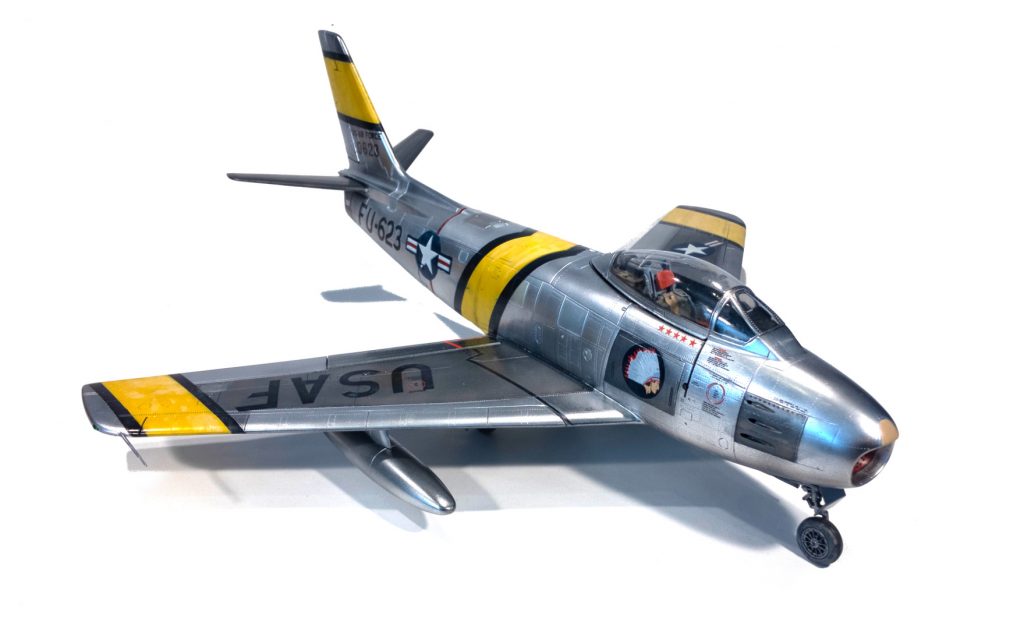 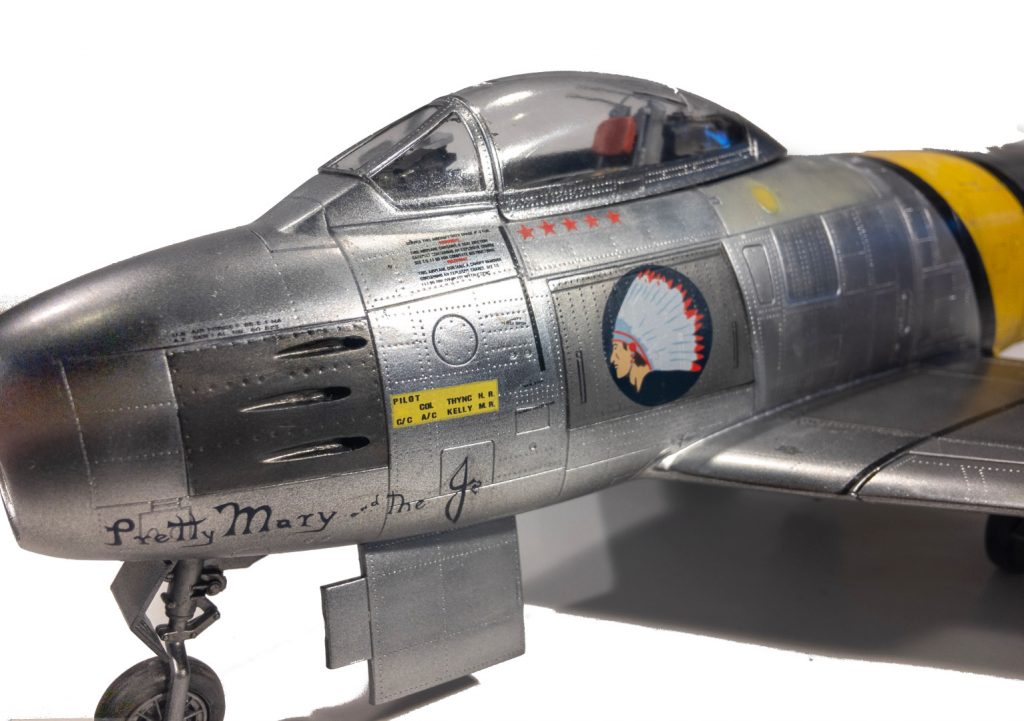 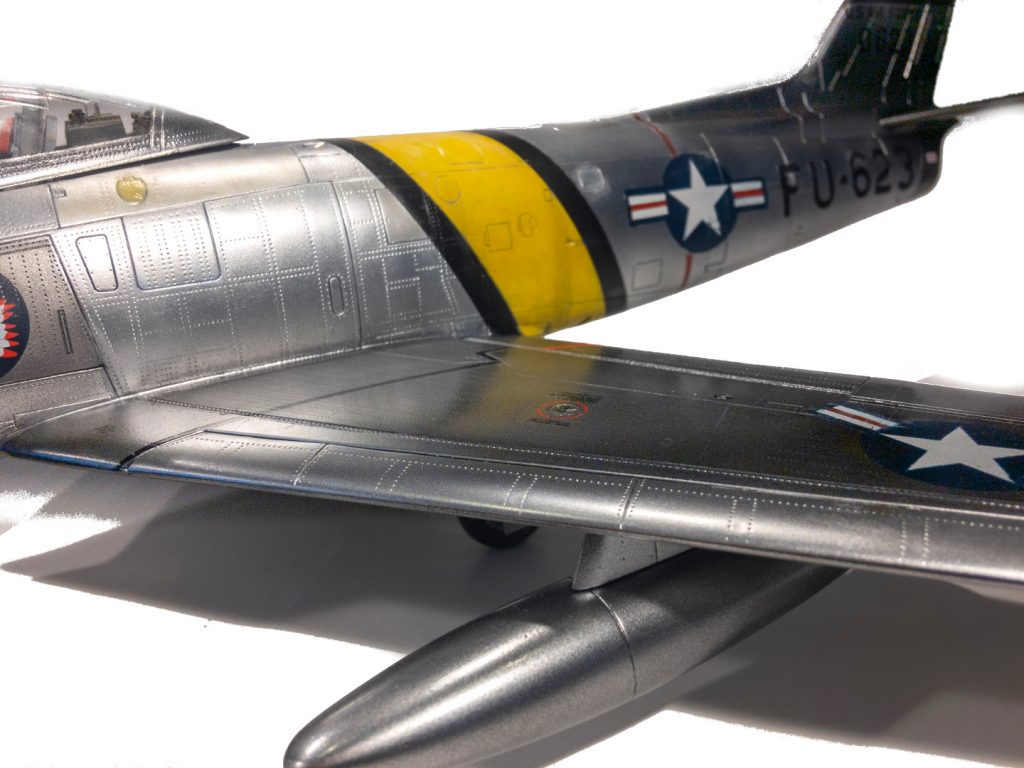 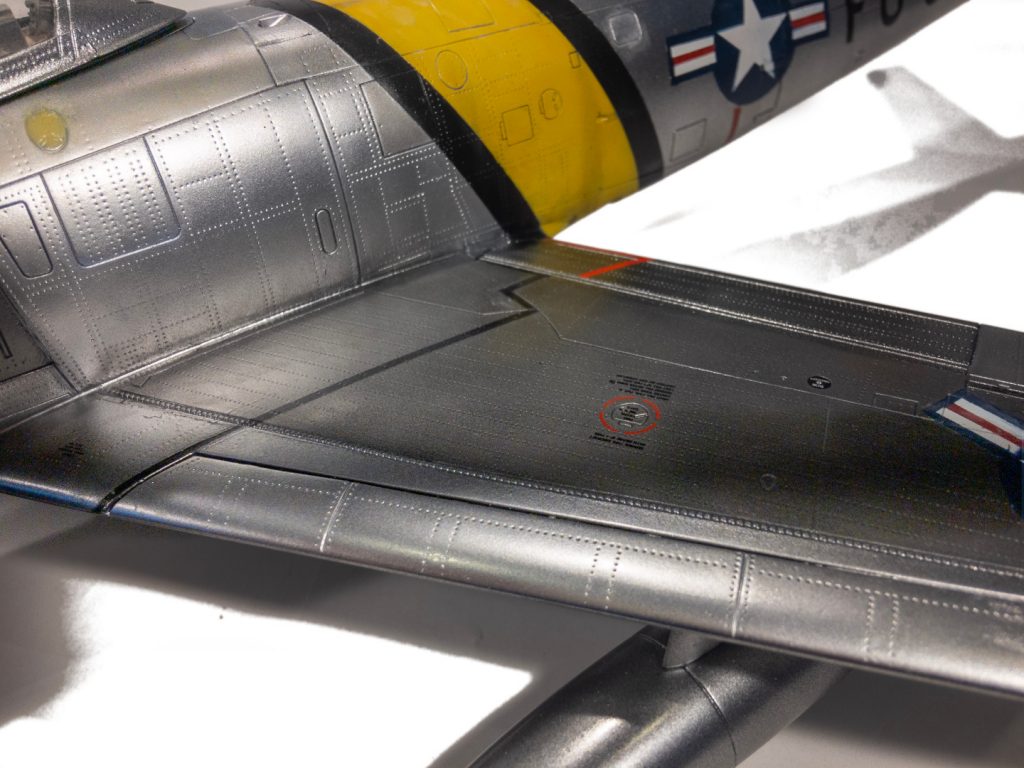 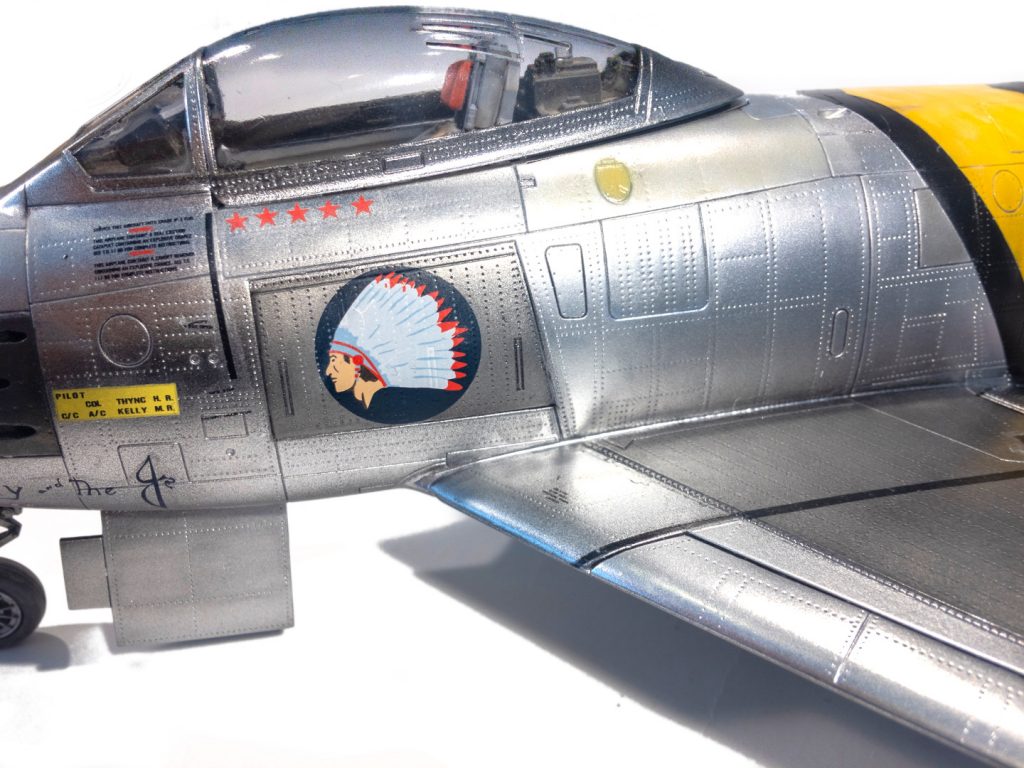 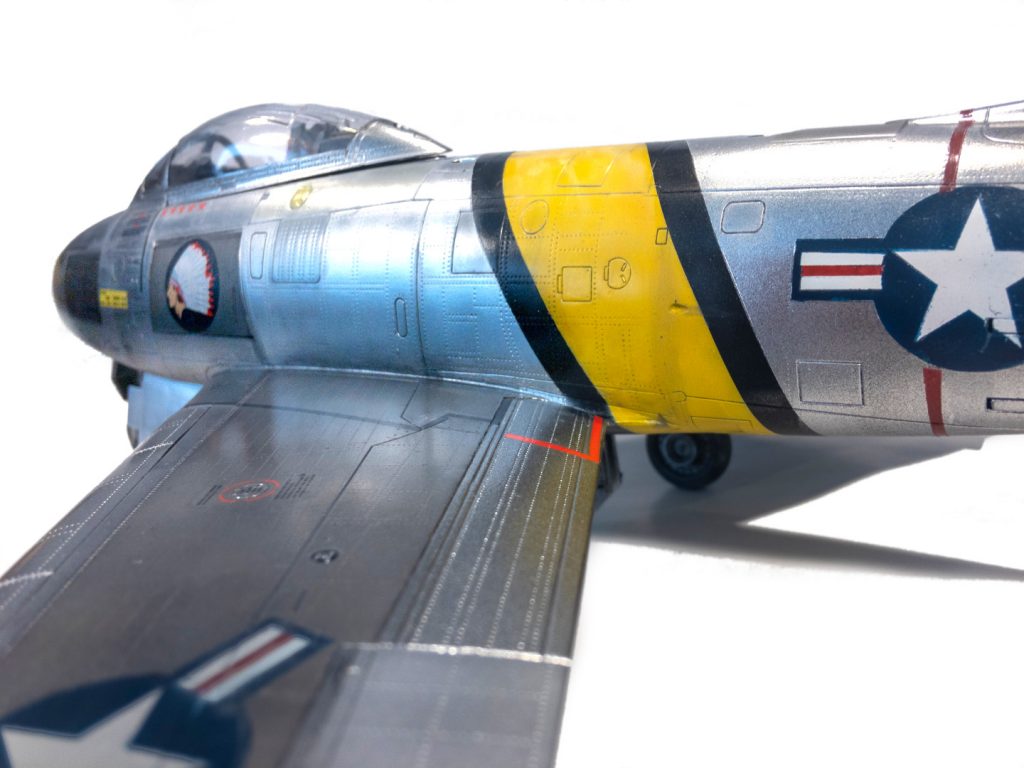 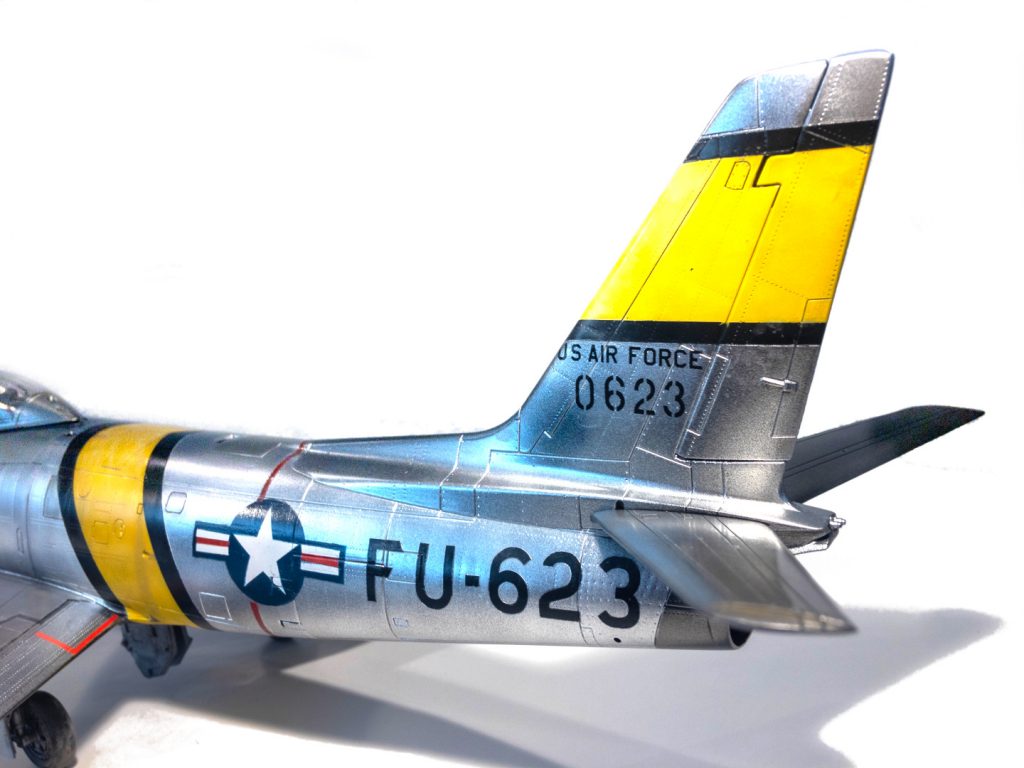 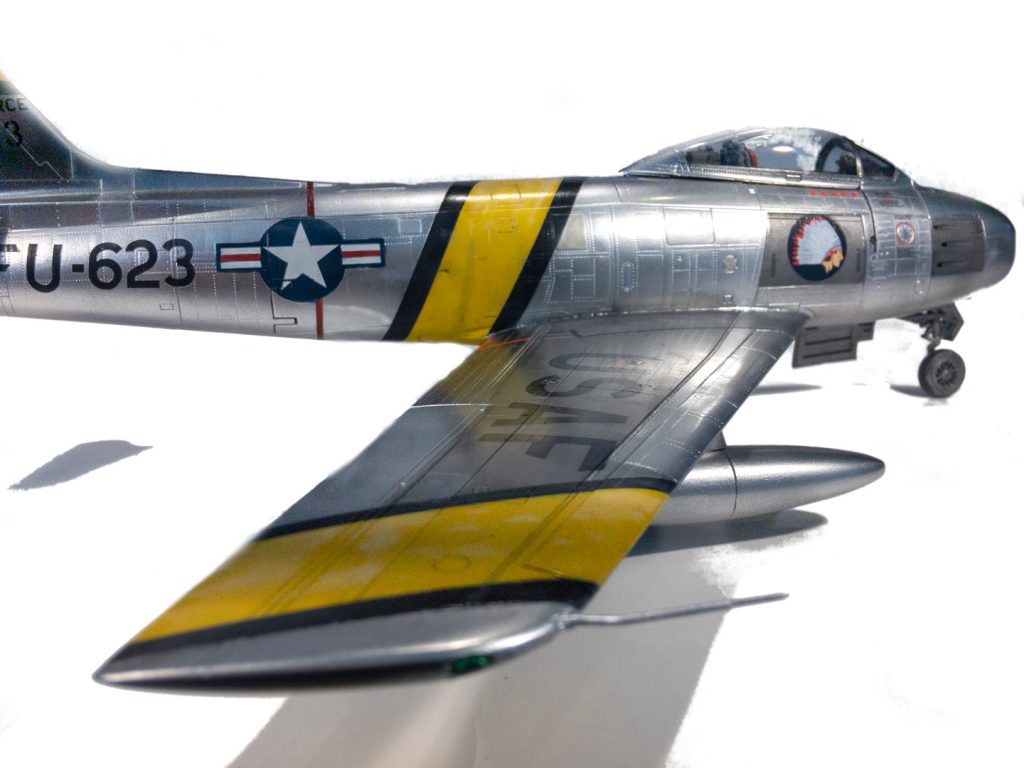