It had been a while since I built a tank kit, so when The Group Build Group (it’s a thing, honest) on Facebook ran “WWII” as their next subject, I took the opportunity to dust off Meng’s King Tiger.

Back before I got any kind of competence at this model making business, I thought of armour subjects as “therapeutic tanks”.  After a particularly involved or annoying aircraft or ship build, I would do a tank to decompress and keep the creative mojo going.  But since I really got into airbrushing and the skills to fix problems with kits or integrate aftermarket effectively, I felt less need to do that.  Also, I have a theory that there are specific techniques, skills, or approaches which work for one kind of modelling subject but not others, or at least that we need to figure out how to apply a technique. 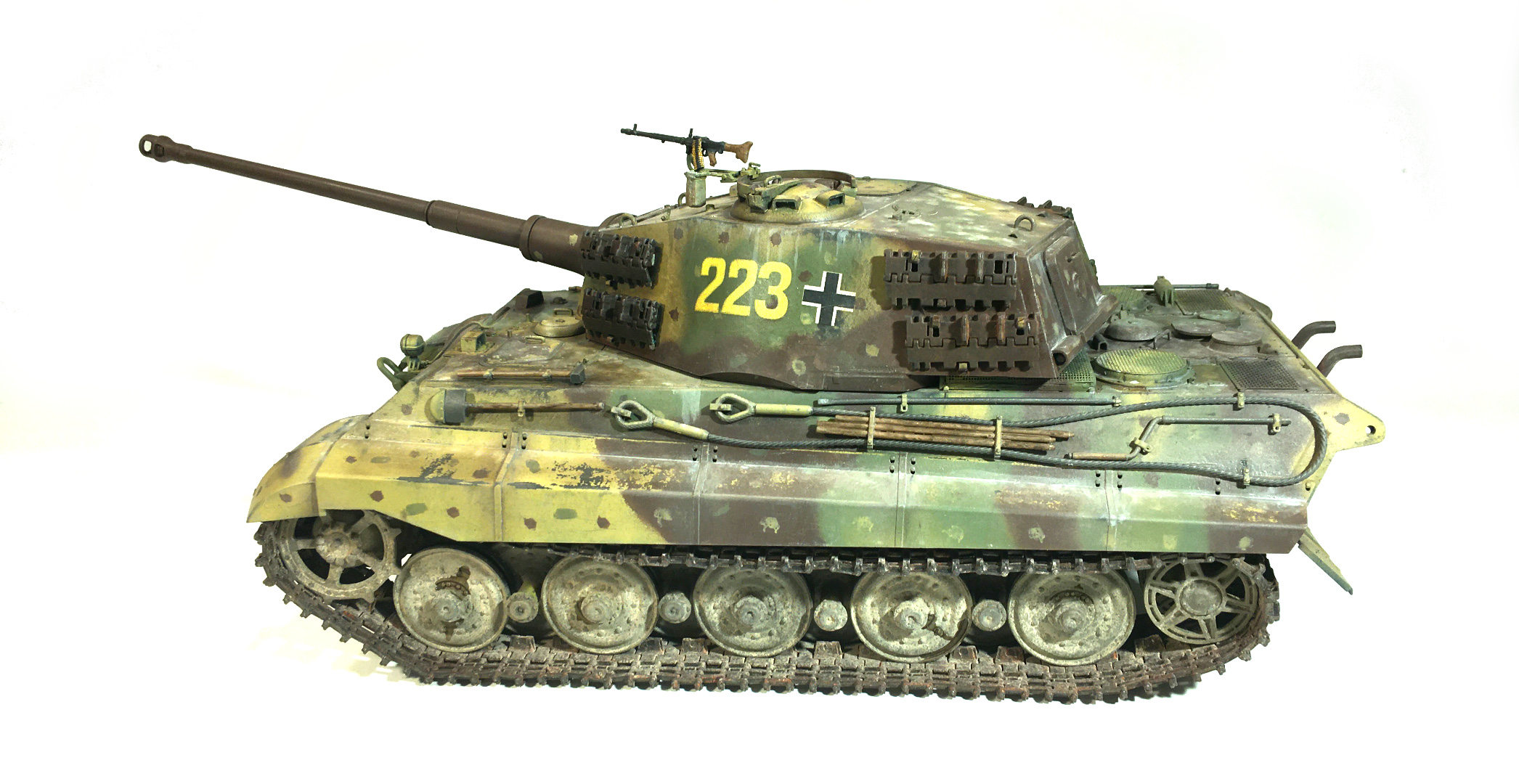 With all that in mind, I set out to build this one as an exercise in build and weathering techniques.  There was much less emphasis on trying to replicate a specific vehicle or photo, more on trying to think of the processes that would have affected the original and reproduce them in scale. 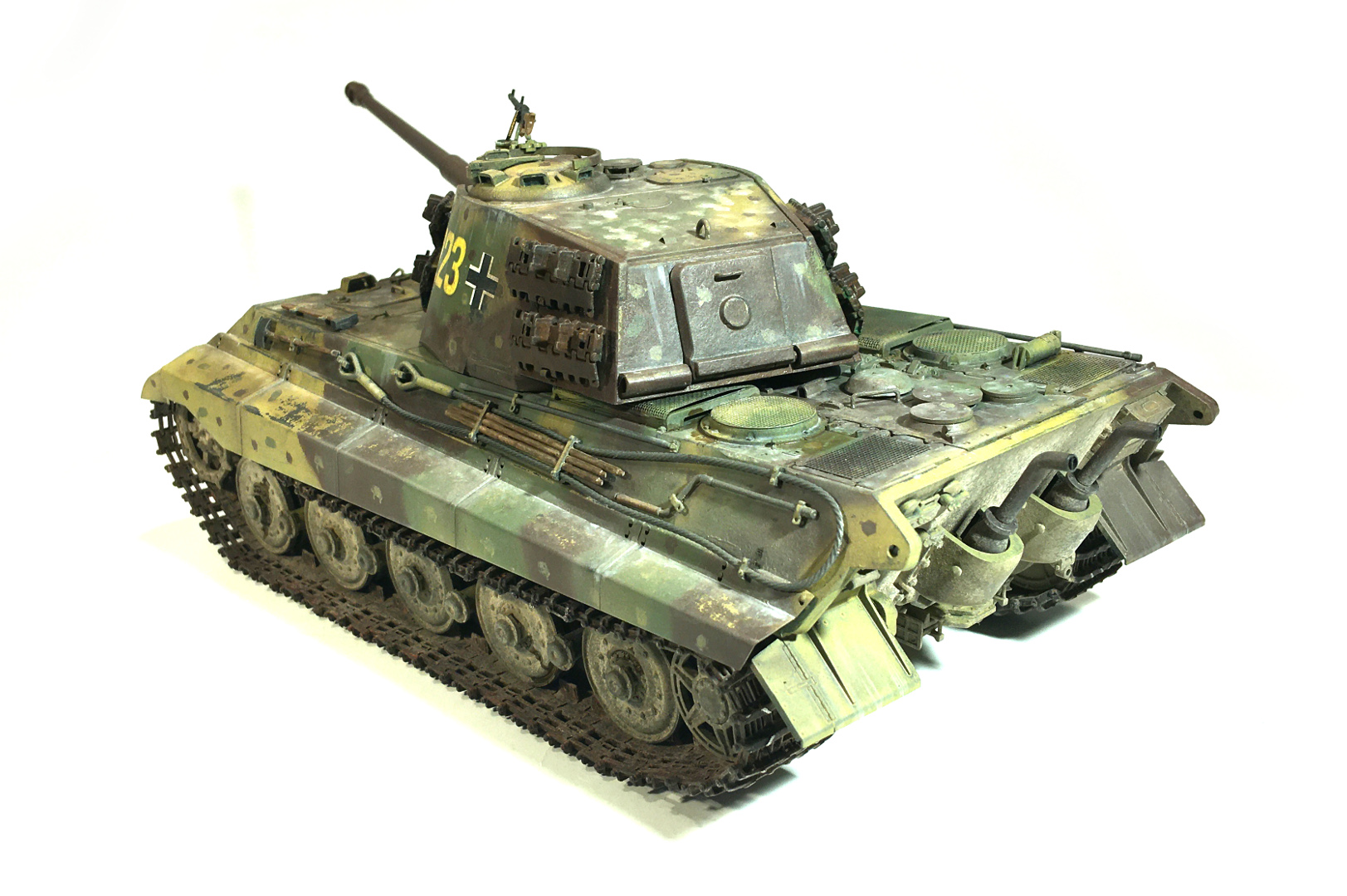 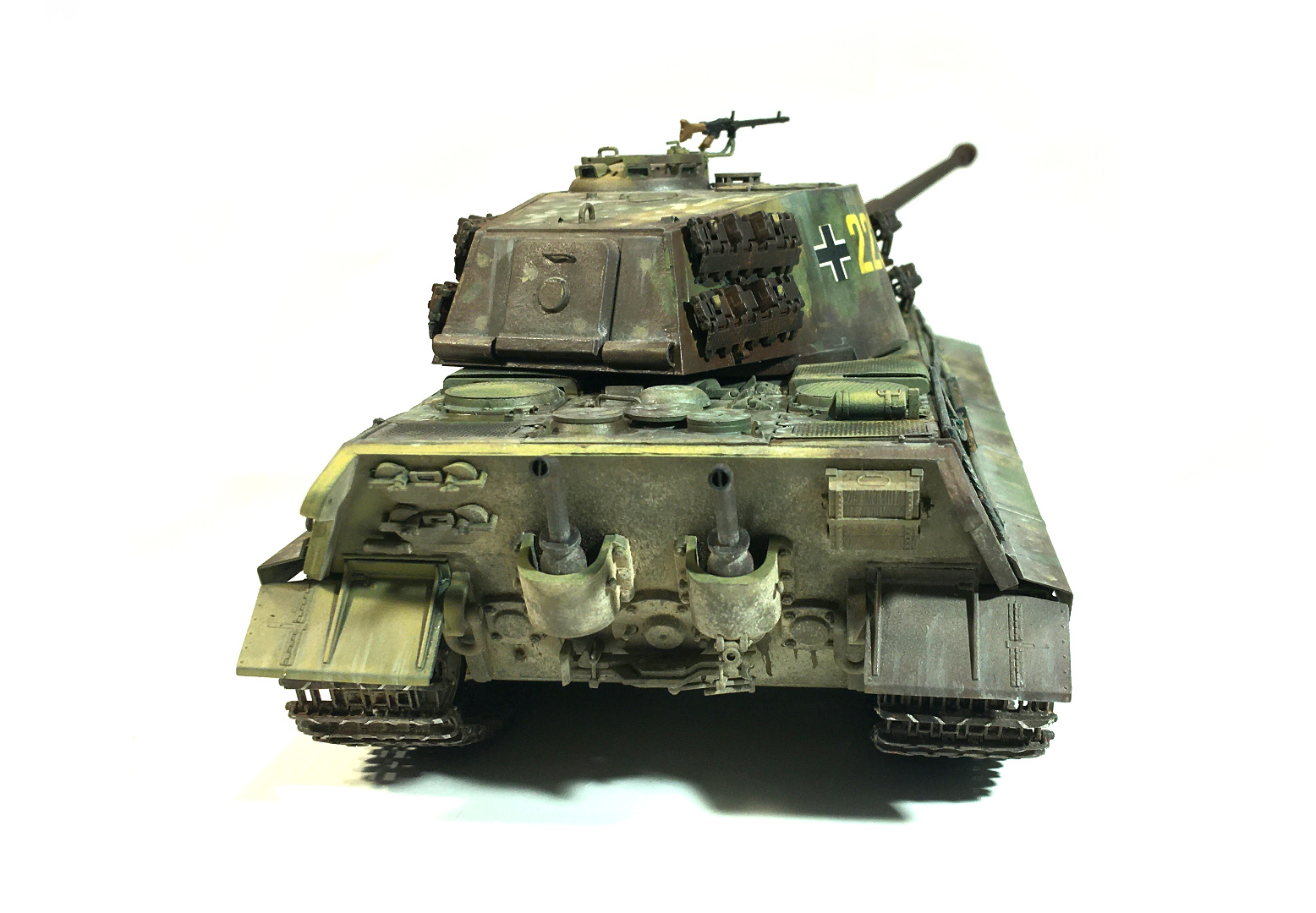 For the most part, the kit went together as easily as I have come to expect from Meng.  Parts are nicely detailed, parts breakdown is quite easy to work with, fit is good and so on.  However, I did have two major problems, and I cannot figure out what may have happened.  The first was the upper/lower hull join, which required heavy clamping to make fit.  There were no obvious impingements, mislocations, extraneous stubs or any of the other things which might normally cause a fit problem.  If anything, it looked like one of those parts was warped.  The other was the turret, which has an exterior and interior which slot together and make a solid mounting for the gun and other elements.  Except, the interior would not seat properly.  Other modellers who have built this kit haven’t experienced these problems, so it is possible I had some warping and equally possible that there was some debris which I just couldn’t see. 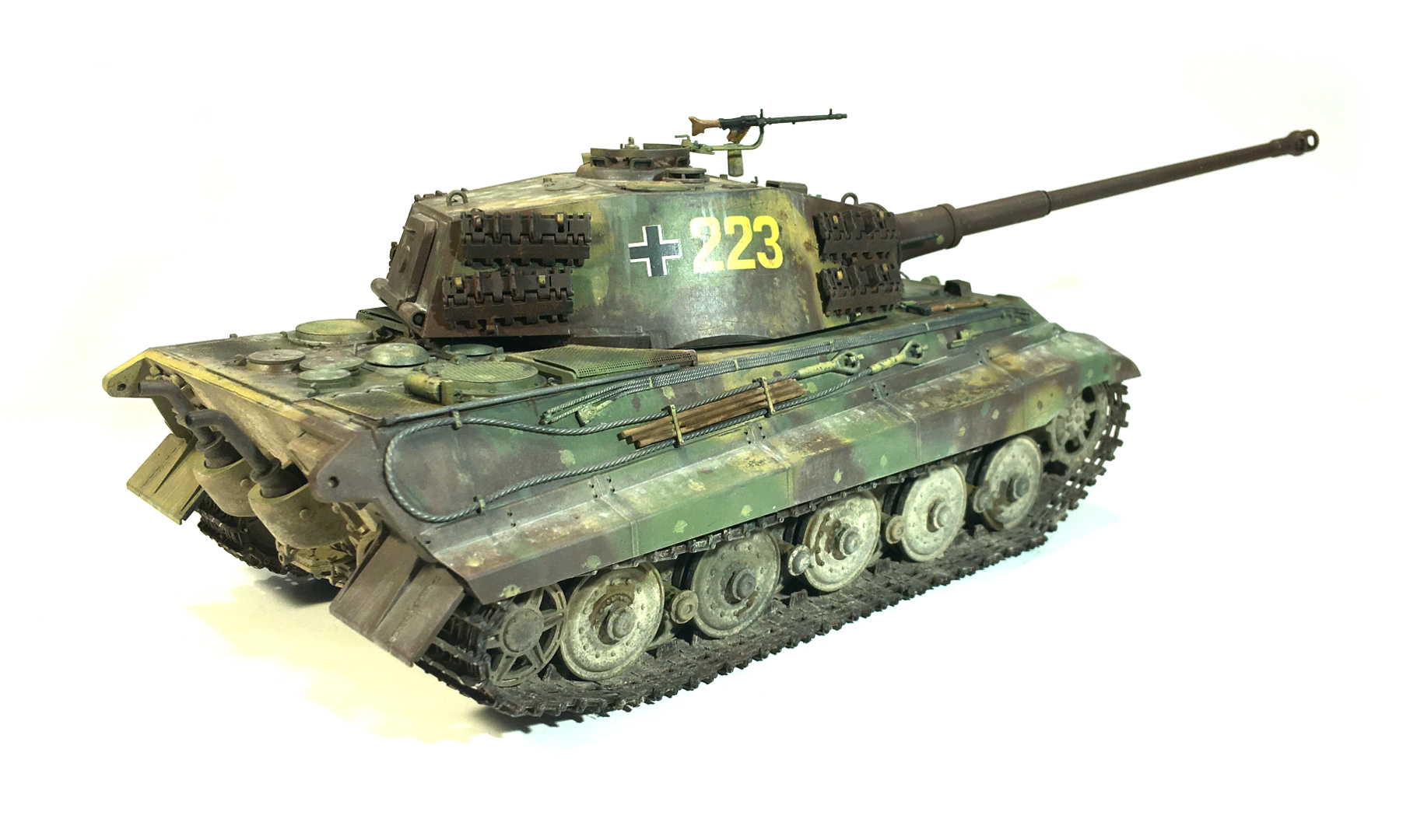 This is a curious kit: unlike previous Meng releases I had seen, this one provides only the most basic kit in the box (though I had the initial release with the metal barrel which is very nice), and sells workable tracks and a full interior separately.  This does allow then to keep the price down, but I really should have gone for the workable tracks.  The kit comes with link and length: if you like these, they are apparently quite good but I have never managed to make this system work well and a few days’ cursing suggested that wasn’t going to change on this one.  I got the Friul King Tiger set and they went together much more happily.  What does it say about me that I can happily work with metal tracks but figure out a simpler method?  The Friuls are complex: each main track piece connects to a broad connector and two thin ones, all on the one piece of wire.  Fortunately, they provide a little jig which makes the system quite manageable. 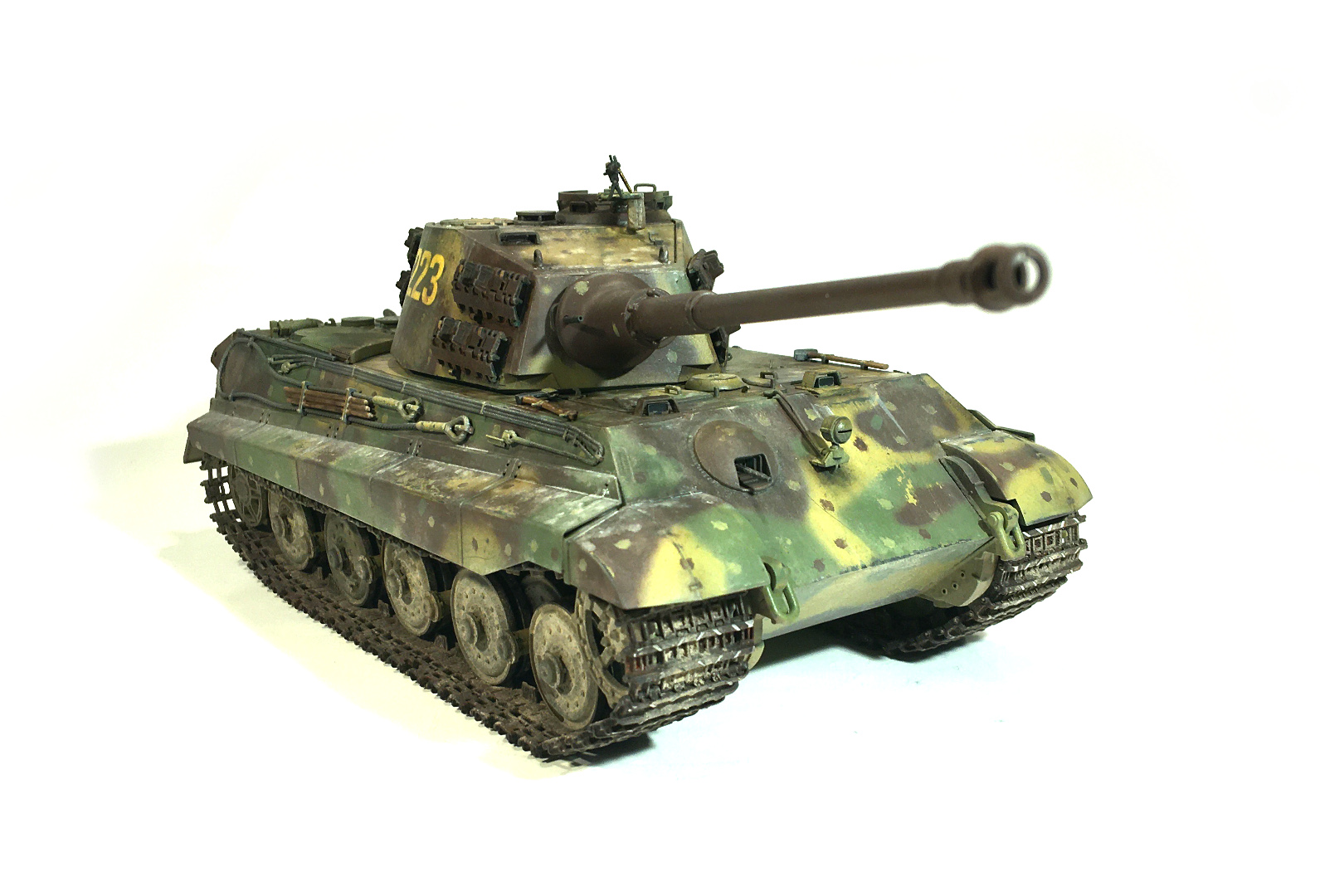 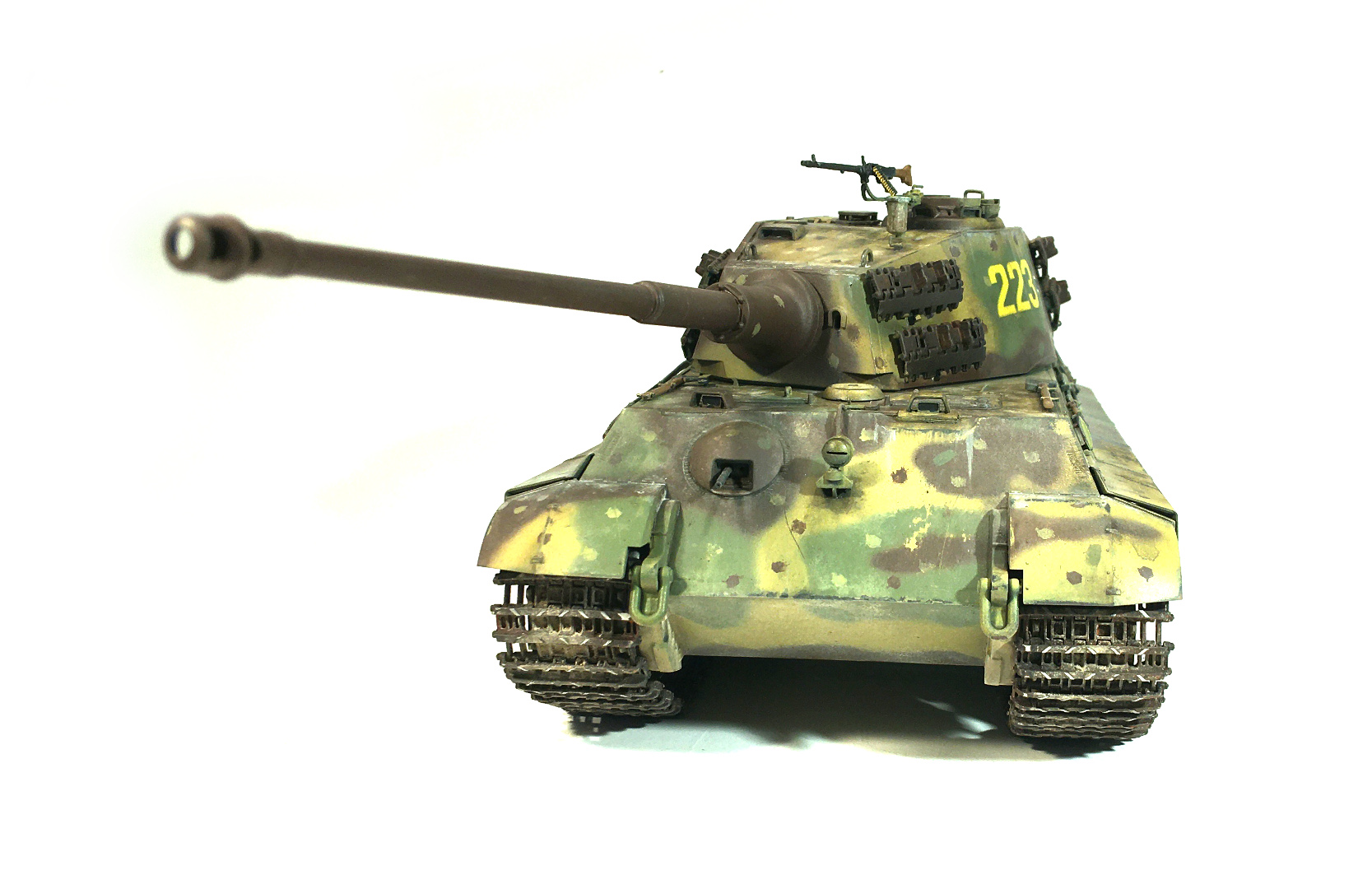 The weathering was the main goal on this one so here’s what I did:

The wheels were painted yellow, with a handful overpainted in the brown and green, then scuffed and scratched.  I wanted some muddy effect, so tried flicking AK mud effects on.  This was a disaster: I didn’t mix it with plaster of Paris, so it just looked like a horrible brown stain all over the wheels.  That got fixed with multiple layers of loose pigment and stippled pigment fixer using my PS-770’s MAC valve.  Oil leak effects were applied over the top: I don’t know why, but leaking wheels seem to have been very common in German tanks. 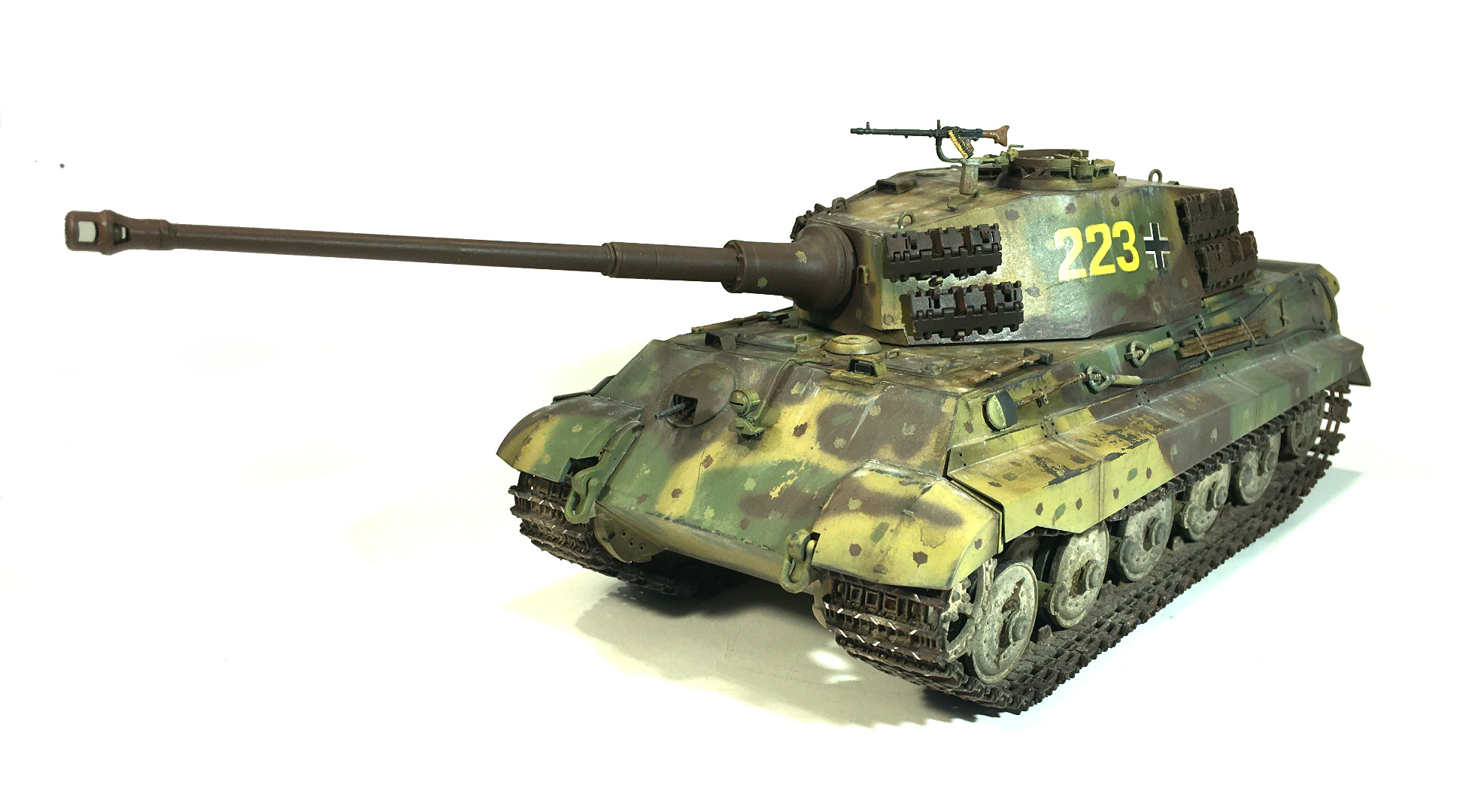 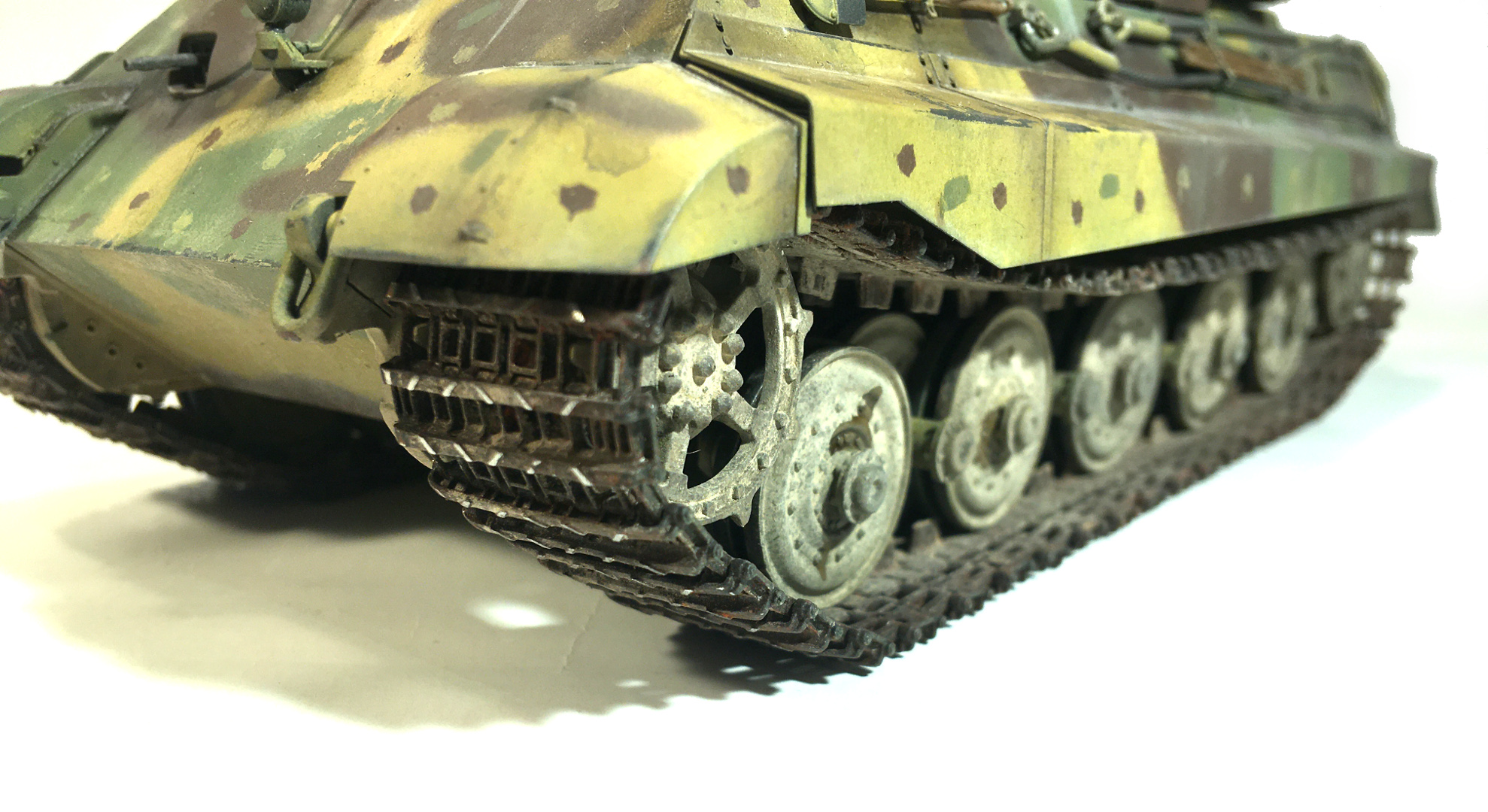 The hull camouflage was applied in layers (using the MRP colours for this scheme), to represent how it may have been done on the real thing.  The whole hull was sprayed yellow, over hairspray, then chipped around high-traffic areas.  More hairspray was applied, along with the green and brown camouflage patterns, then those were also chipped.  For this model I used a fibreglass pen for chipping: this was a useful tool which allows a very nice abrasion of paint as well as breaking through to activate the chipping layer. 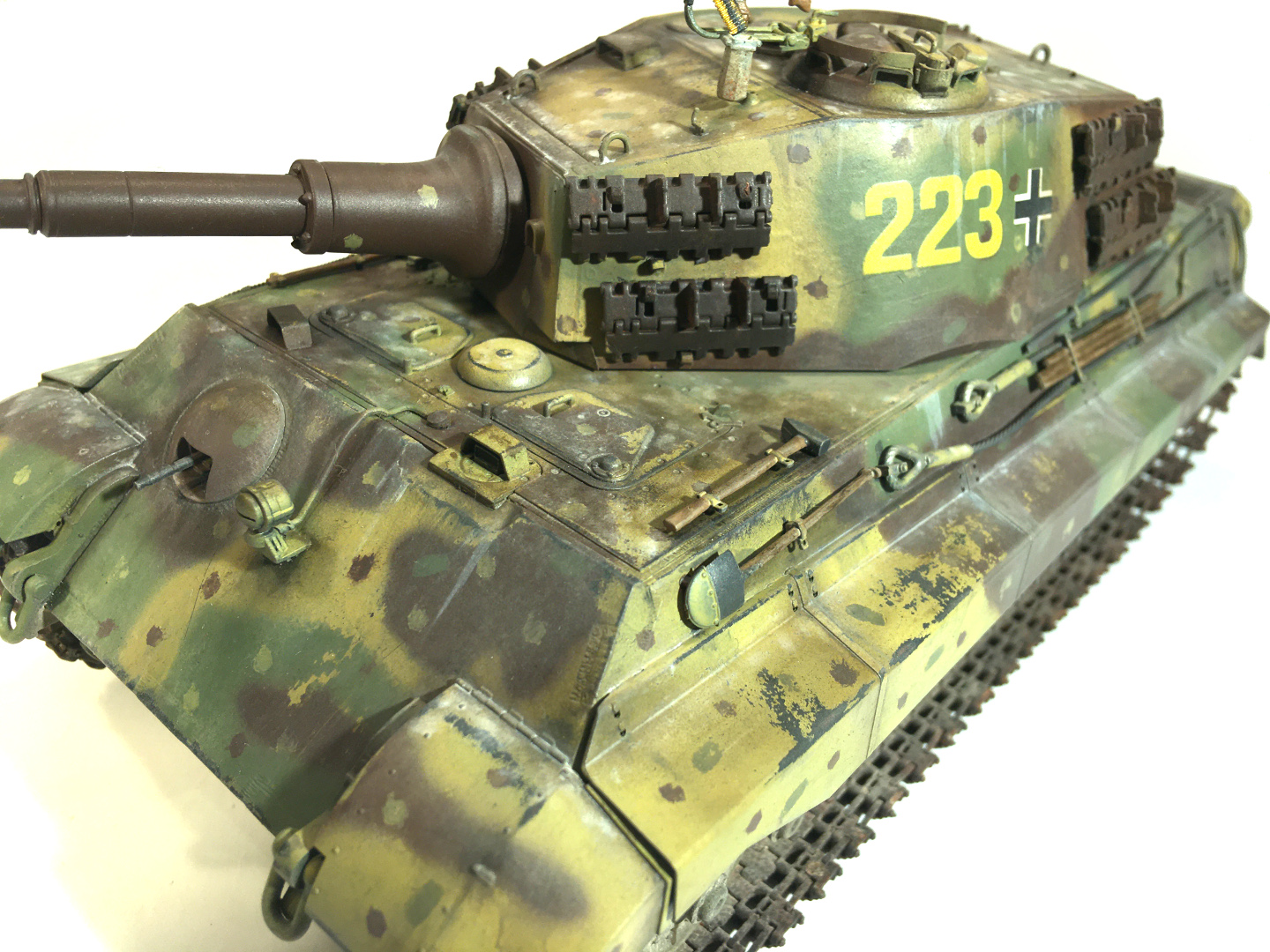 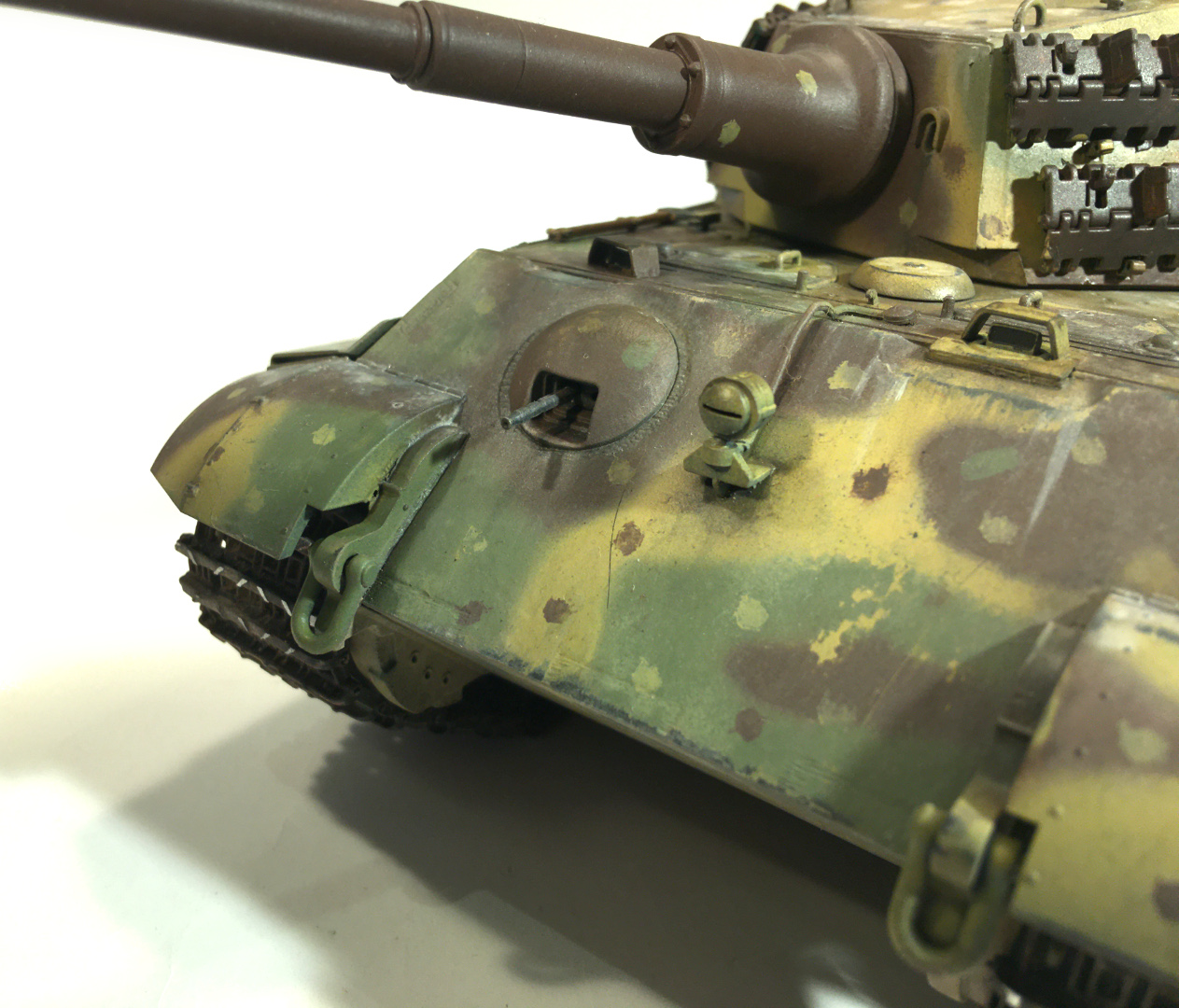 The ambush scheme’s dots were probably the weakest part of the effects I created here: I used a hand-held stencil but it was too easy for paint to drip or dislodge.  Fully masking would have been better, or even dotting the paint on with a brush.  Once the surface was finished, I added some scratches where the tank may have brushed against objects, added the decals and abraded them a little where appropriate. 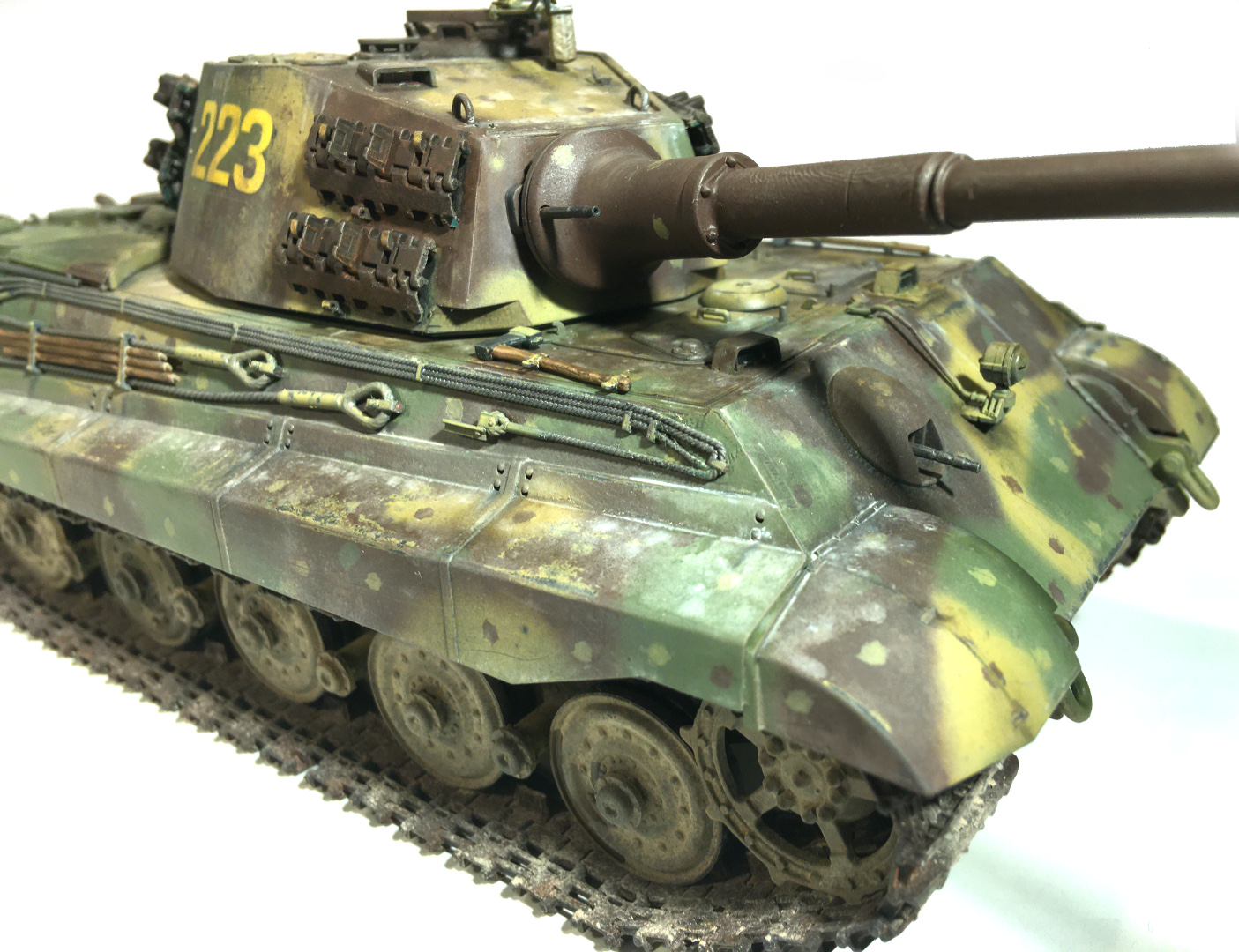 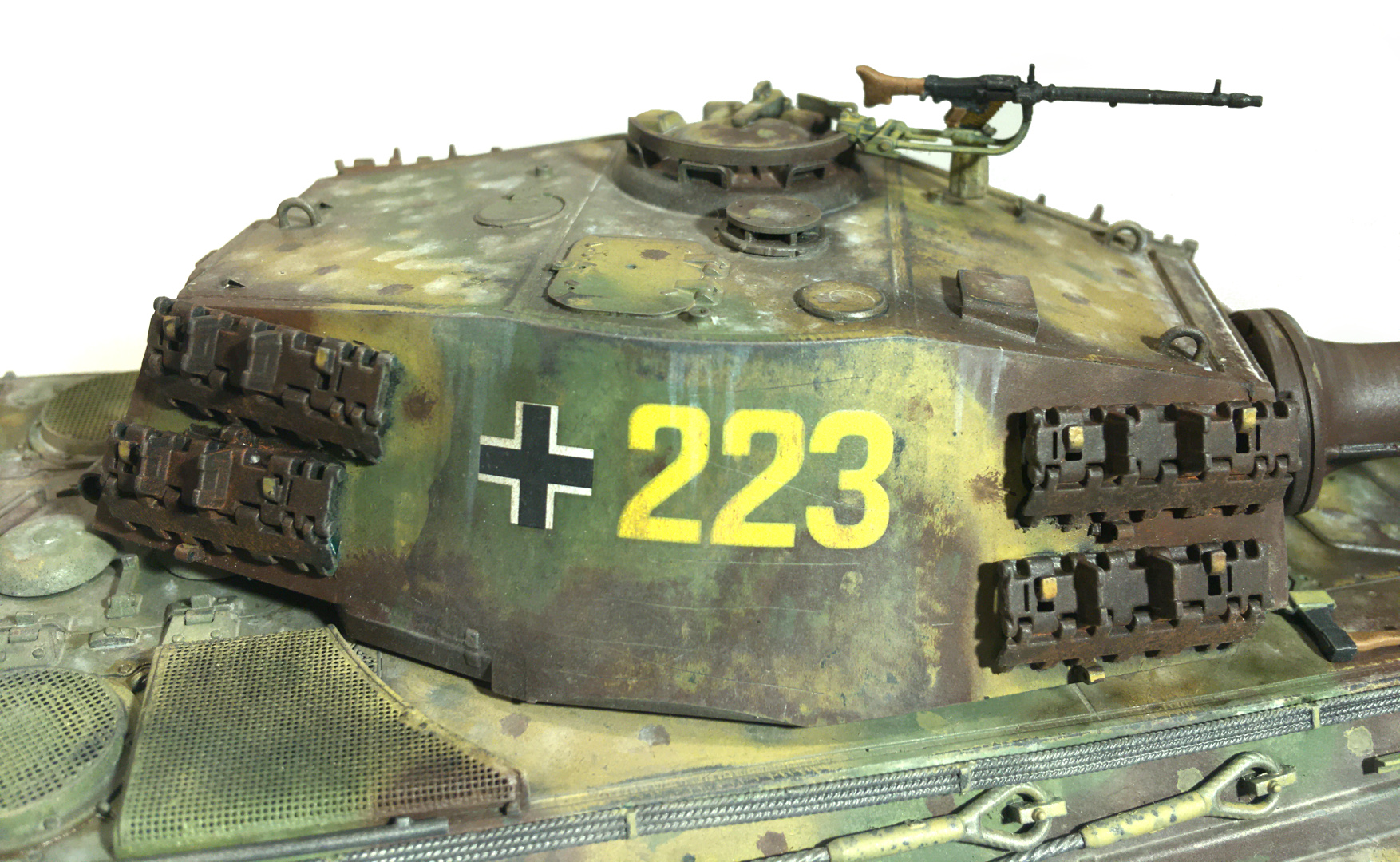 The exhausts were one of the nicer effects, but sadly vanished under the dusty effects.  These were sprayed burnt iron, with some light and dark rust pigments stippled on.  Meanwhile the tracks were sprayed steel and had the same treatment. 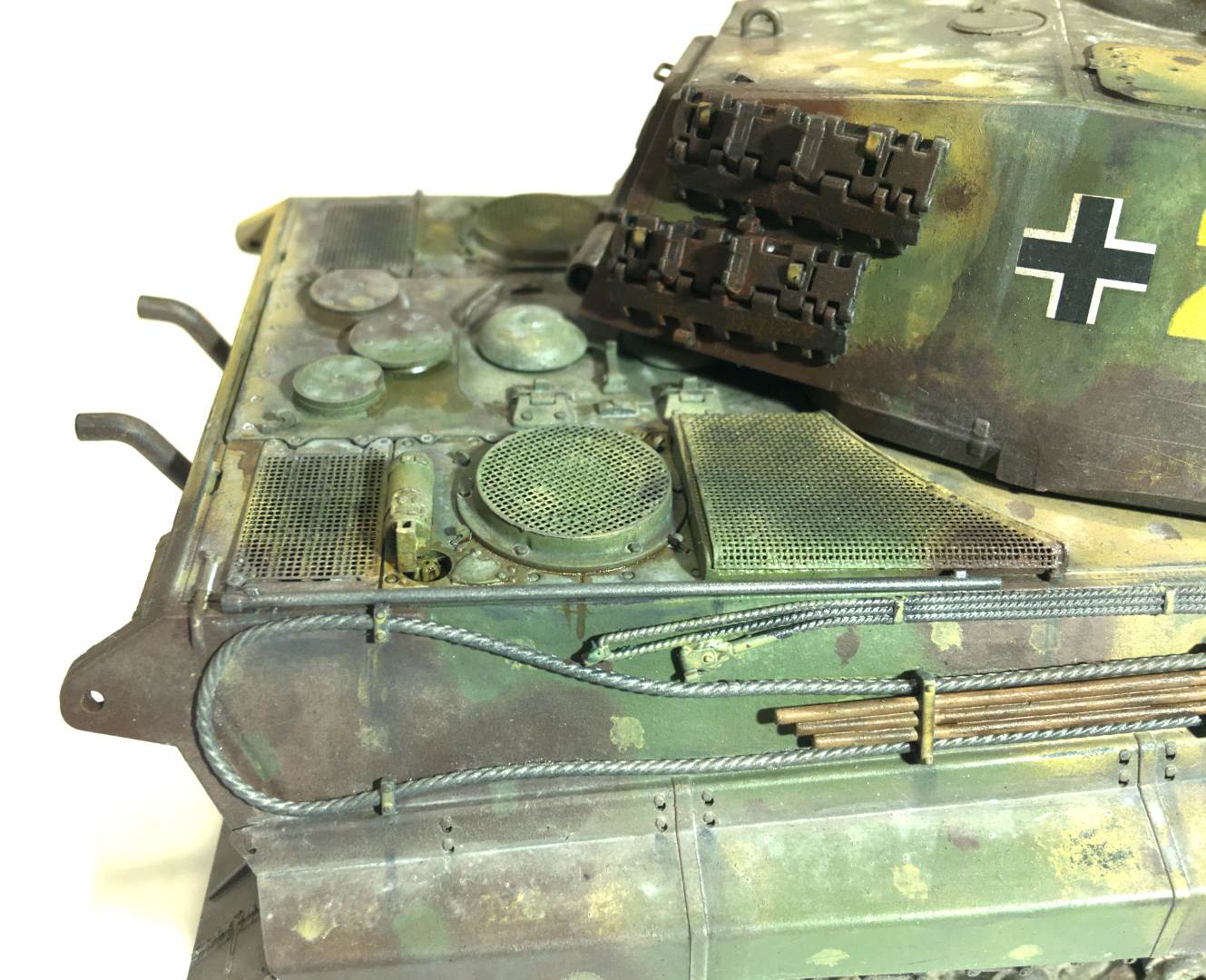 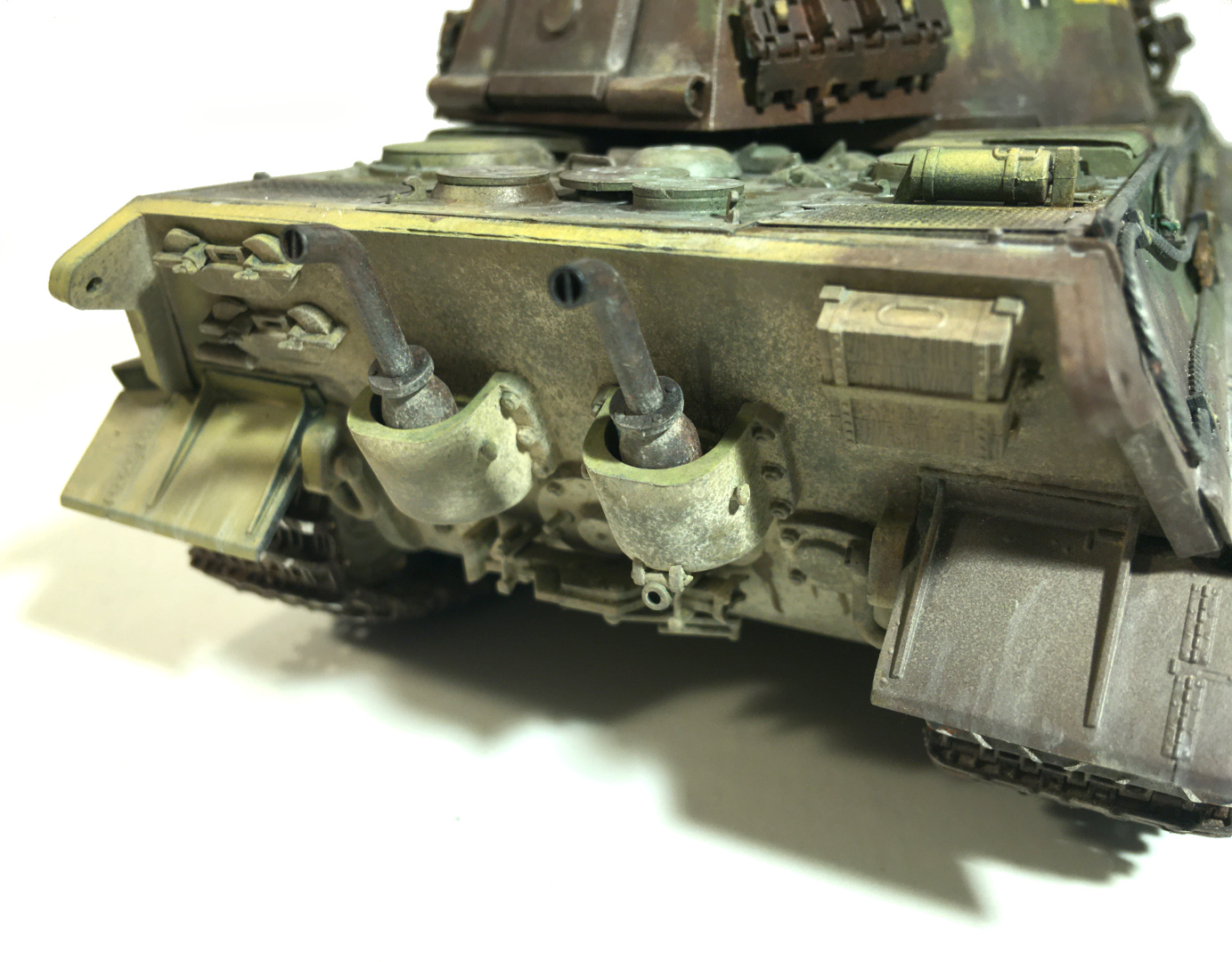 Weathering on the hull was an experiment to confirm some things I suspected from other recent builds.  I started with AK streaking grime for green and DAK (yellow, I guess) vehicles.  These gave some nice effects, much as I wanted.  I also used some of their rain marks, which is a dusty white version of the streaking grime, but a product I have had less success with.  In this case, it worked reasonably well, giving a subtle extra layer of dirtiness. 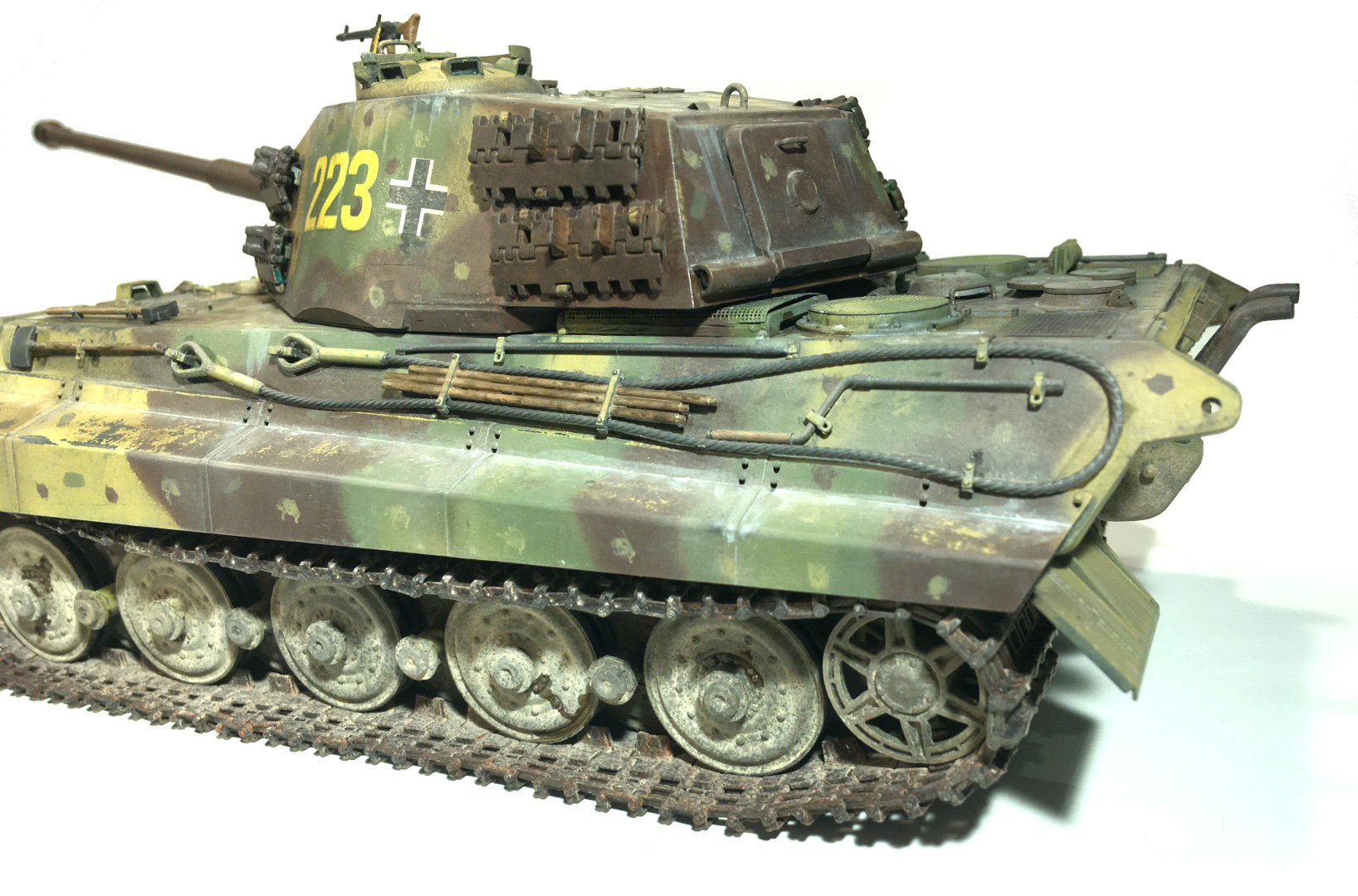 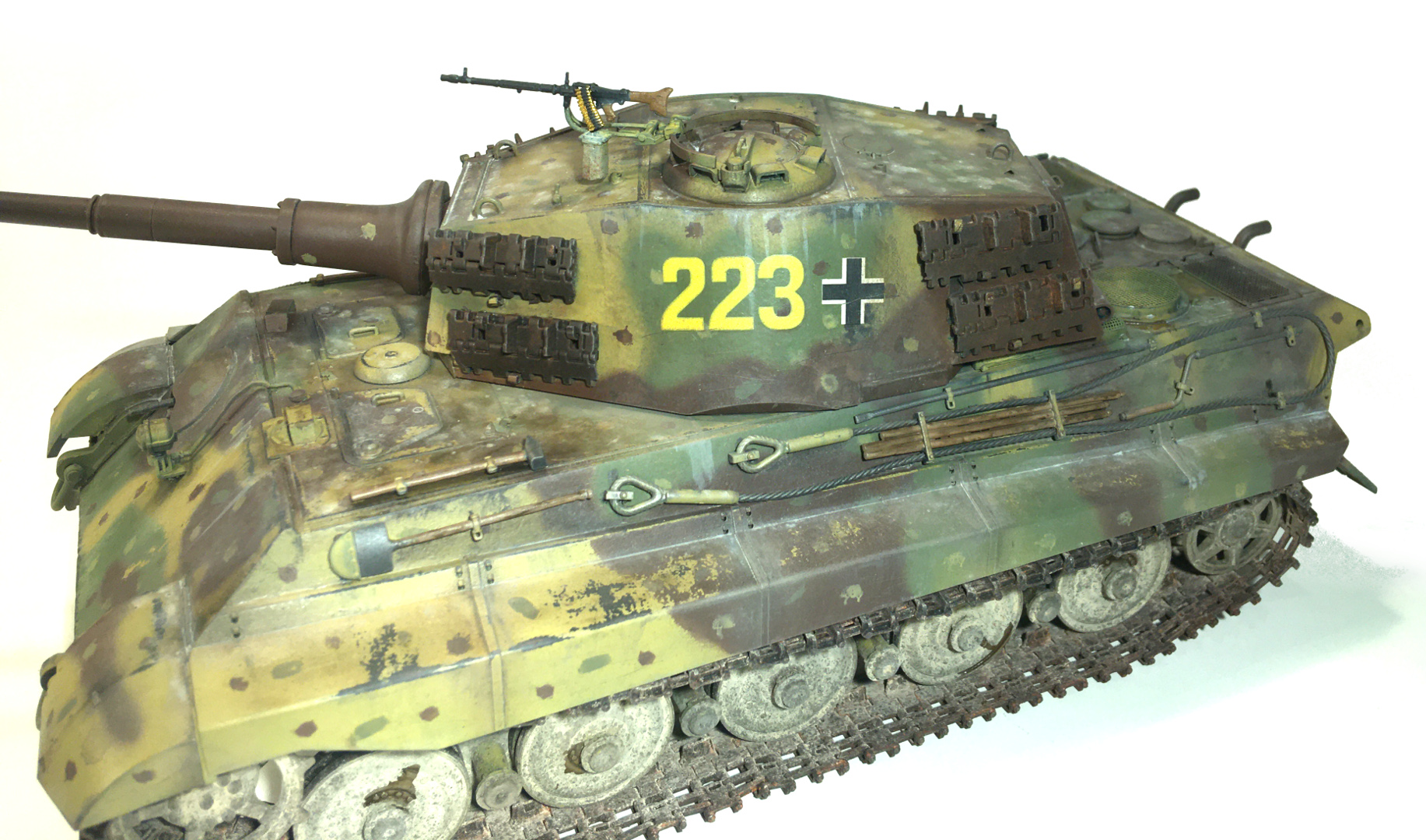 After the streaking, the model looked quite stark, so I started dirtying higher-traffic areas with a grimy grey-brown oil paint.  This was dotted on in tiny dots, then scrubbed into the surface with a soft Filbert brush.  I used the oil quite dry, having placed it on some card to soak up the oil.  This worked very nicely.  Some of the streaking was starting to disappear, so in places I used the grimy oil to build up the streaking effect.  I also tried out using very heavily thinned white oil paint in little puddles of thinner on flat surfaces to represent where standing water had dried.  I like the effect enough to keep developing it. 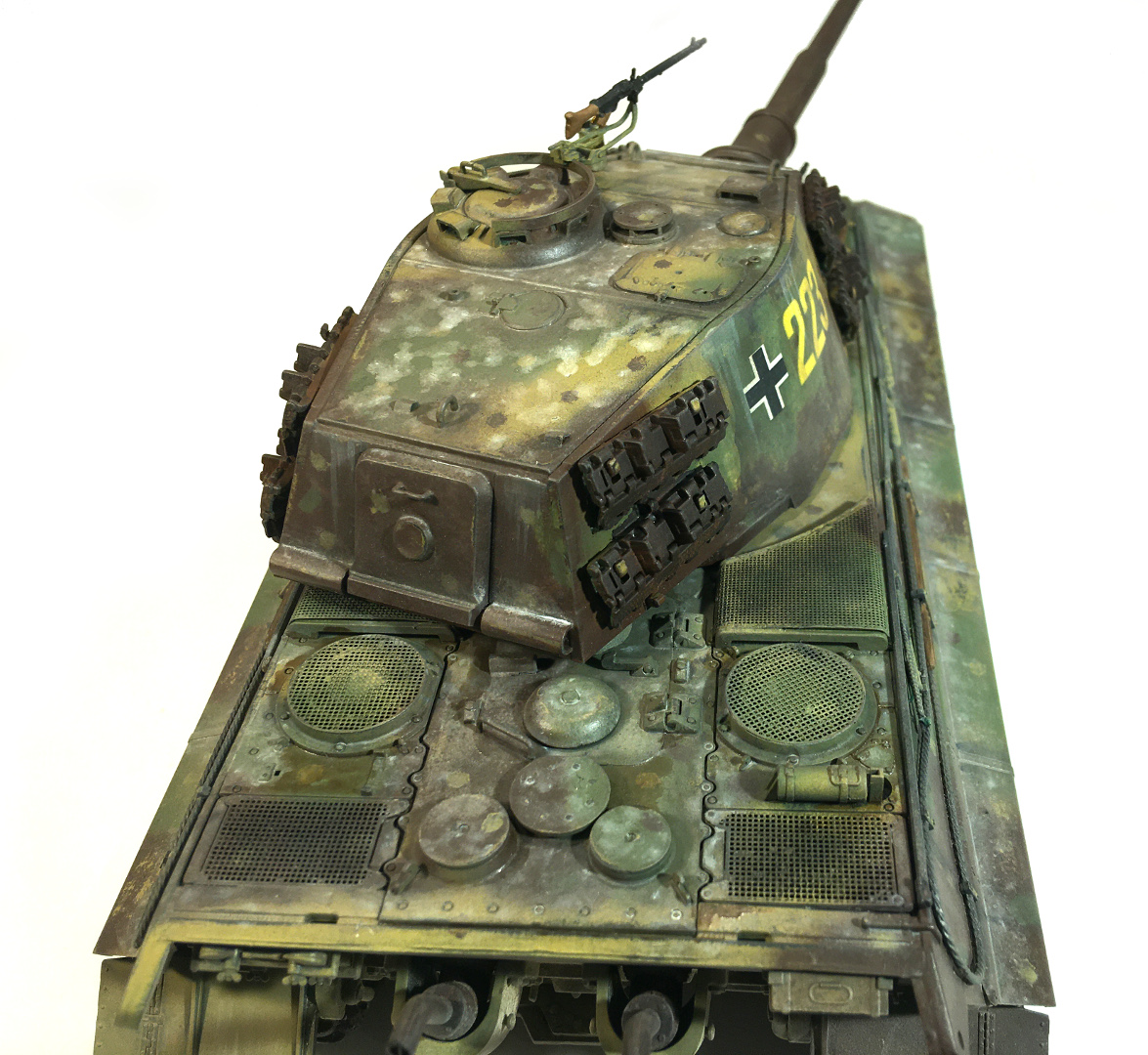 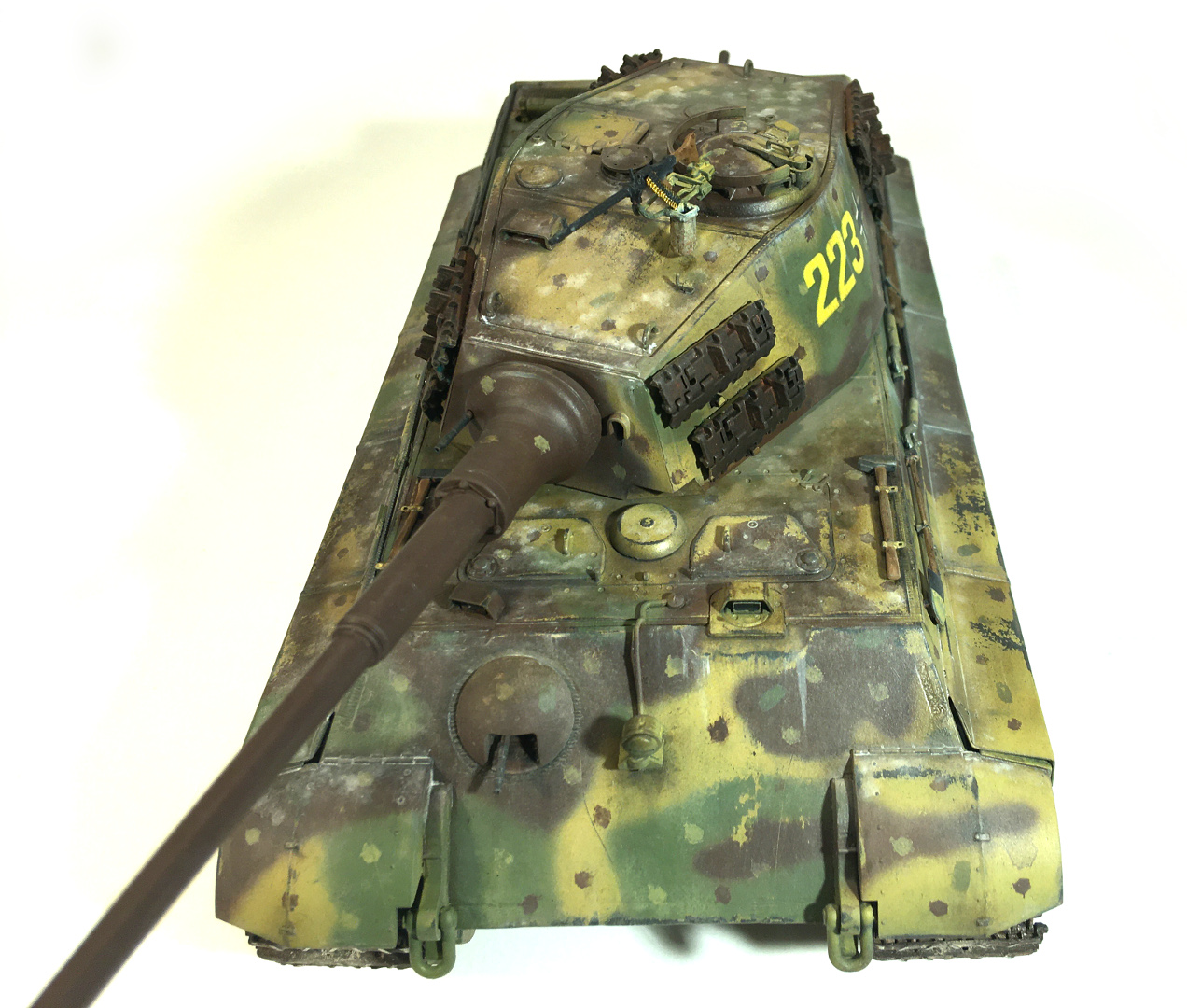 Over the top of everything I applied loose pigment (European Earth) very lightly to give that dusty look, and added a bit of black pigment powder on the engine gratings to give a bit more character.  A few more fuel stains were added around the engine deck. 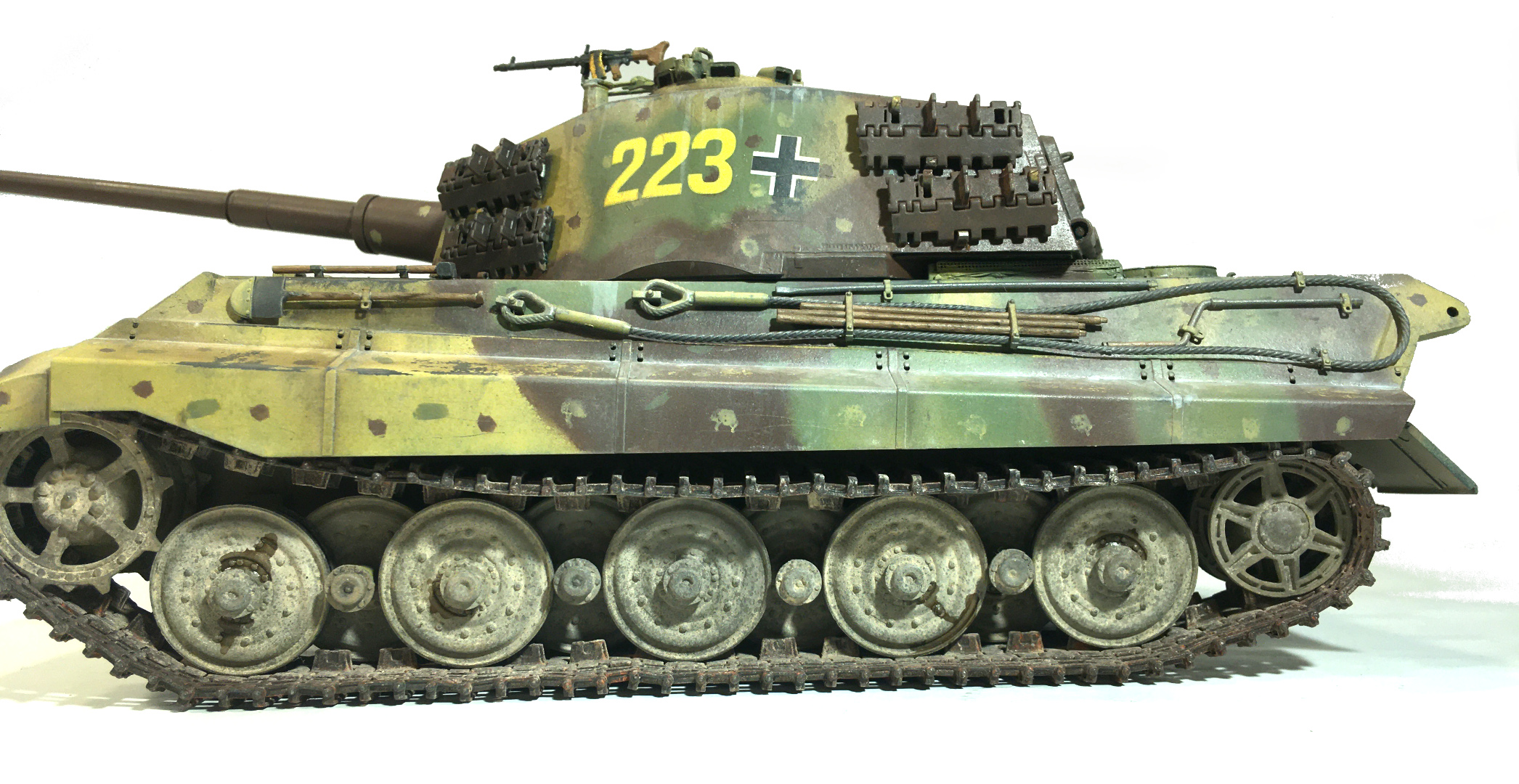 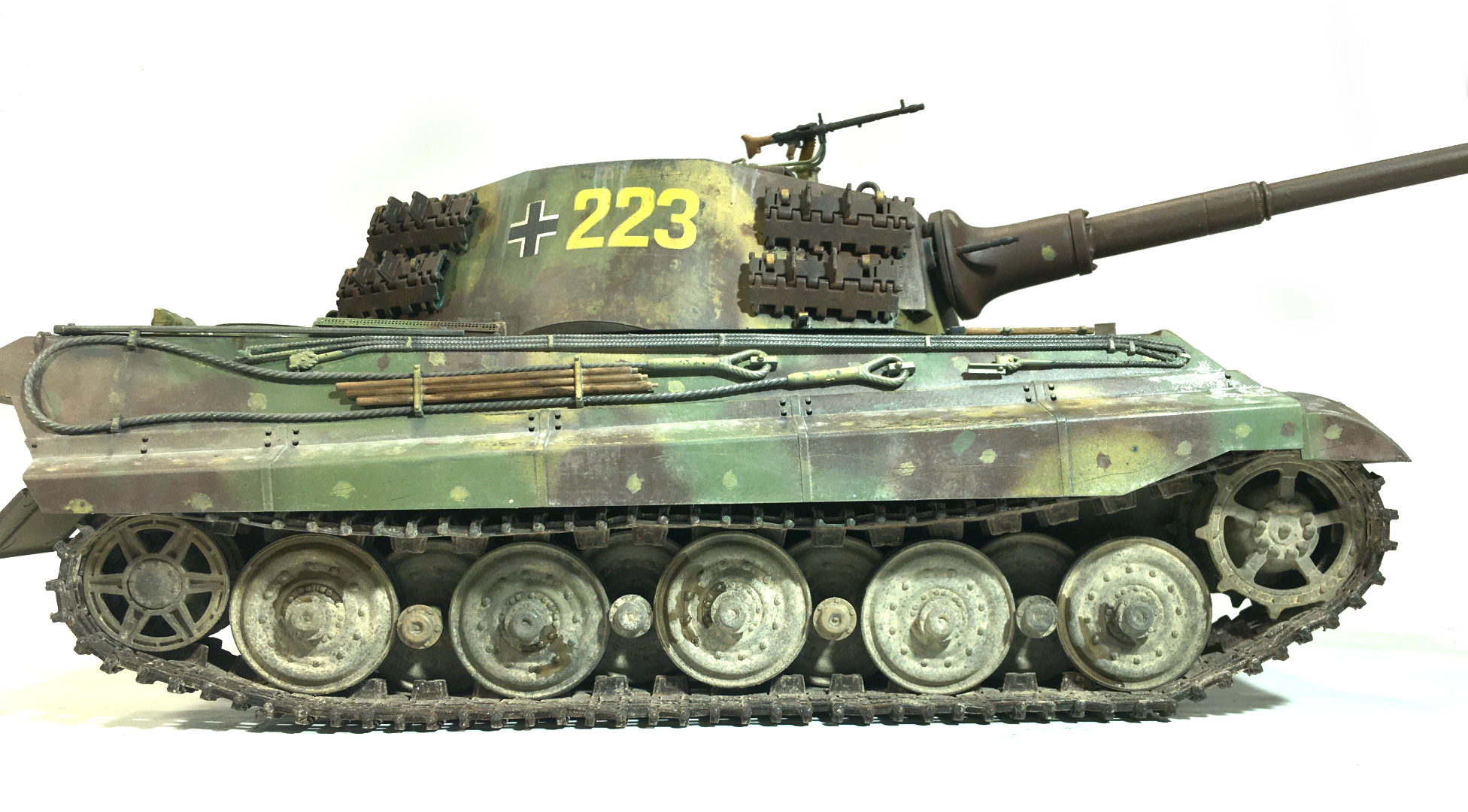 Overall, I’m happy with this tank.  Although armour is definitely not my thing, I had a lot of fun building and weathering it.  The different processes and effects which affect tanks make them an interesting canvas to work on, and they allow us to explore our techniques more fully and that can only be a good thing.  Also, don’t be afraid of over-doing it.  Even in places like the right hand side of the turret where I thought I had done far too much, it ended up blended in quite nicely.

Next article Aoshima 1/350 Kongo: A lesson in hubris

Good start. I too have one of these staring at me from the shelves. I’d only read good things about this kit, hadn’t heard about any issues with the suspension. Will follow this build with interest.

It’s an odd one. In retrospect I suspect the parts got warped somehow.