Meng’s new 1/48 Super Hornet is a surprising gem of a kit.  It might not look like much at first glance, but it fits well and is a delight to build.

Fit: 4/5 decent, no large or problematic seams, but just lacking a little finesse

Engineering: 4/5 the parts breakdown was conventional but large locating tabs make assembly a breeze.  Pity about the canopy seam

Detail: 4/5 the cockpit would benefit from some more detail but overall detail is nice.  Rivets and panel lines are fine and crisp, while wheel wells have nice raised piping and structure.

Accuracy: 4/5 no issues with the aircraft, but a more representative weapons load would have been nice to have. 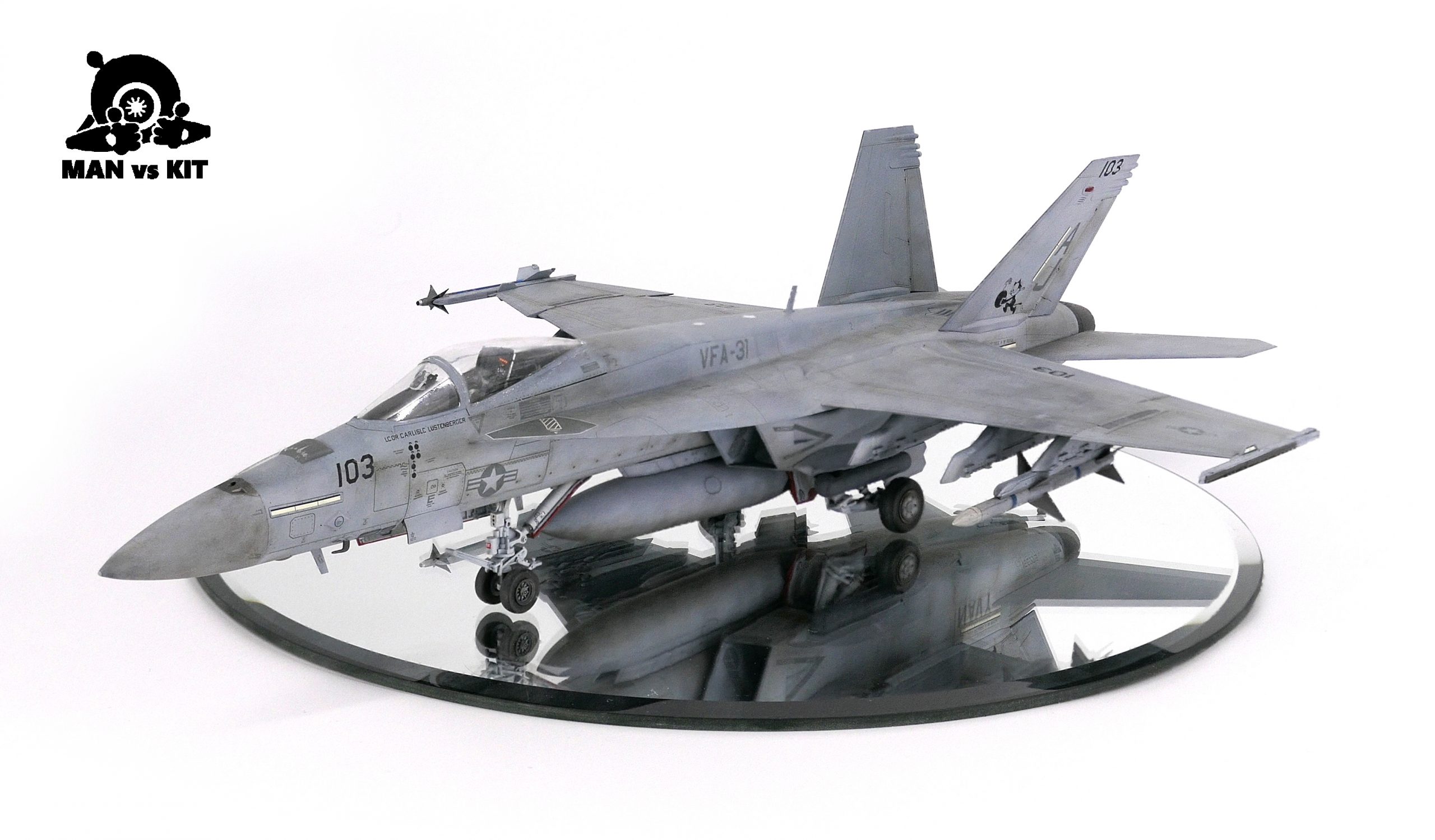 I had been waiting for a new-tool F/A-18E Super Hornet kit for a couple of years, not just because it’s an interesting airframe to model, but also because I won a handy reference book for one of the group builds I entered over on the Cold War Model Making and Photos Facebook group.  I think it was for the Viggen.

Fast-forward to earlier this year when I heard about new-tool Hornets from both Meng and Hobby Boss.  For some reason, whether it was a typo in an ad post or me just being dense, I got into my head that the Hobby Boss was a legacy Hornet and the Meng would be the Super Hornet.  Now, legacy Hornets are probably the more interesting of the two types to model, as they have served in more air forces and some of those let their planes get rather grubby.  So my cunning plan was to get one of each, use my reference book and also have the interesting weathering challenge of the older aircraft in maybe Canadian or Spanish service. 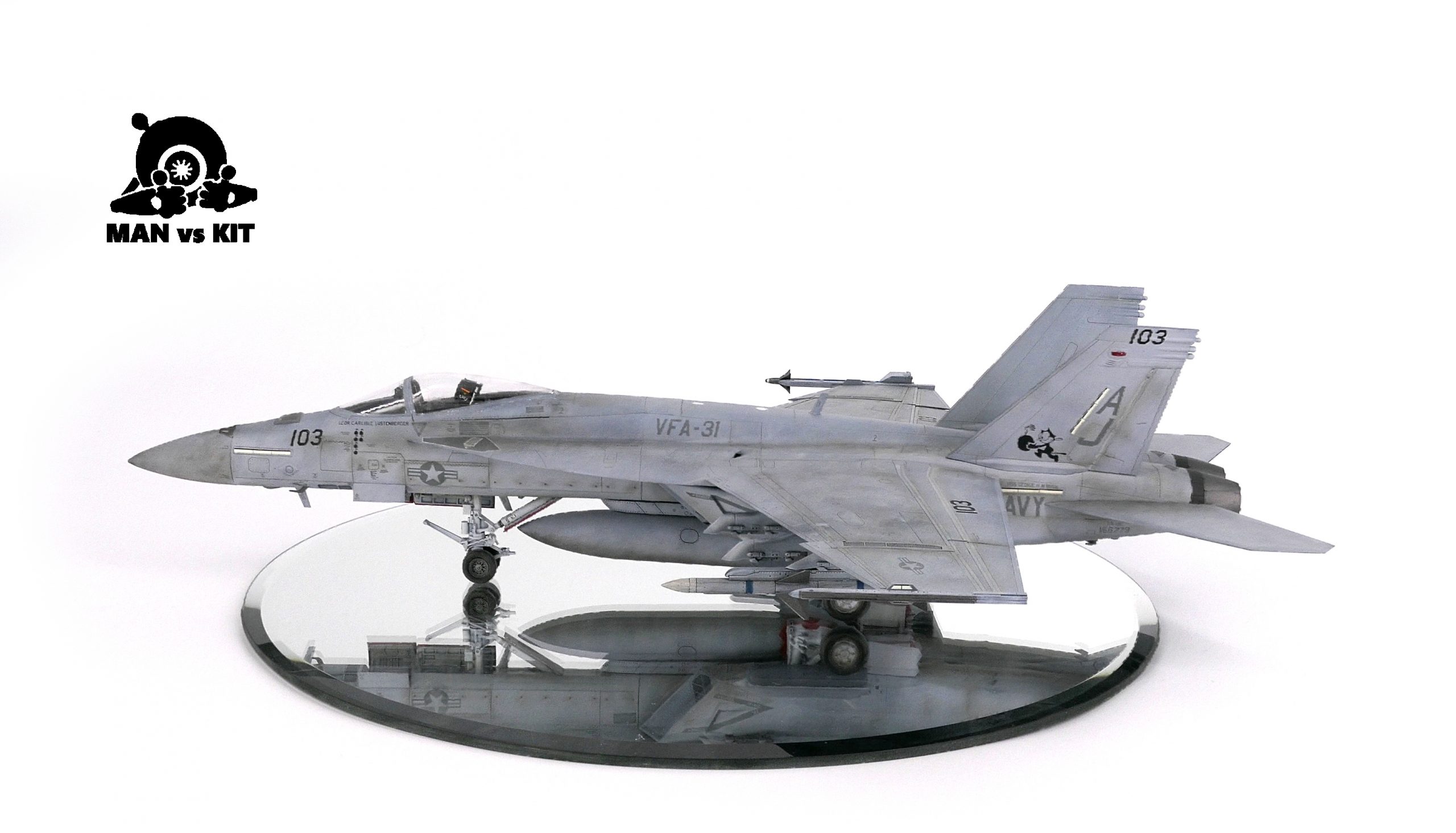 Of course, it turned out that they were both Super Hornets.  Of course, the Meng was released first.  Of course, as soon as people saw the Meng kit they decided it wasn’t up to much and started mocking it…

I think they are wrong. 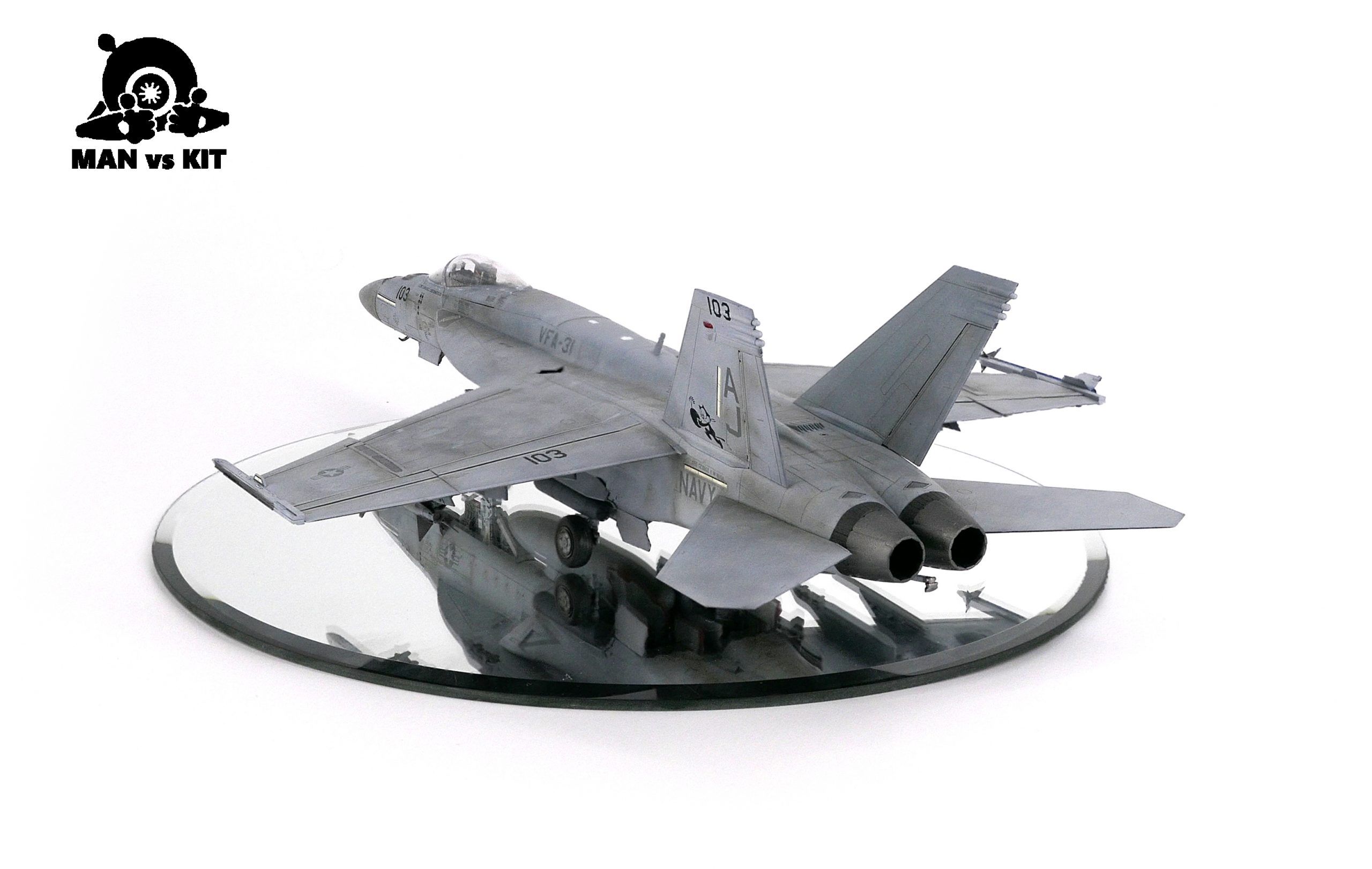 There are two main complaints about this kit.  The first is that the parts breakdown is conventional and similar to the older Hasegawa kit, while the second revolves around the decals.

The parts breakdown is certainly quite simple, but there is nothing wrong with that.  The kit goes together very well, with large locating tabs which make aligning parts straightforward.  The parts generally fit well and locate easily, with no need to build awkward and unsupported structures.  The only potential difficulty comes with closing the fuselage around the intake trunks and gear bays: these parts all fit together snugly and I could imagine these causing trouble if you don’t quite clean the sprue gates and similar, but I’m pretty ham-fisted and didn’t have any issue.  The landing gear slot in easily at the end of construction, and though some of the gear door struts are a little fiddly it all goes together quite well. 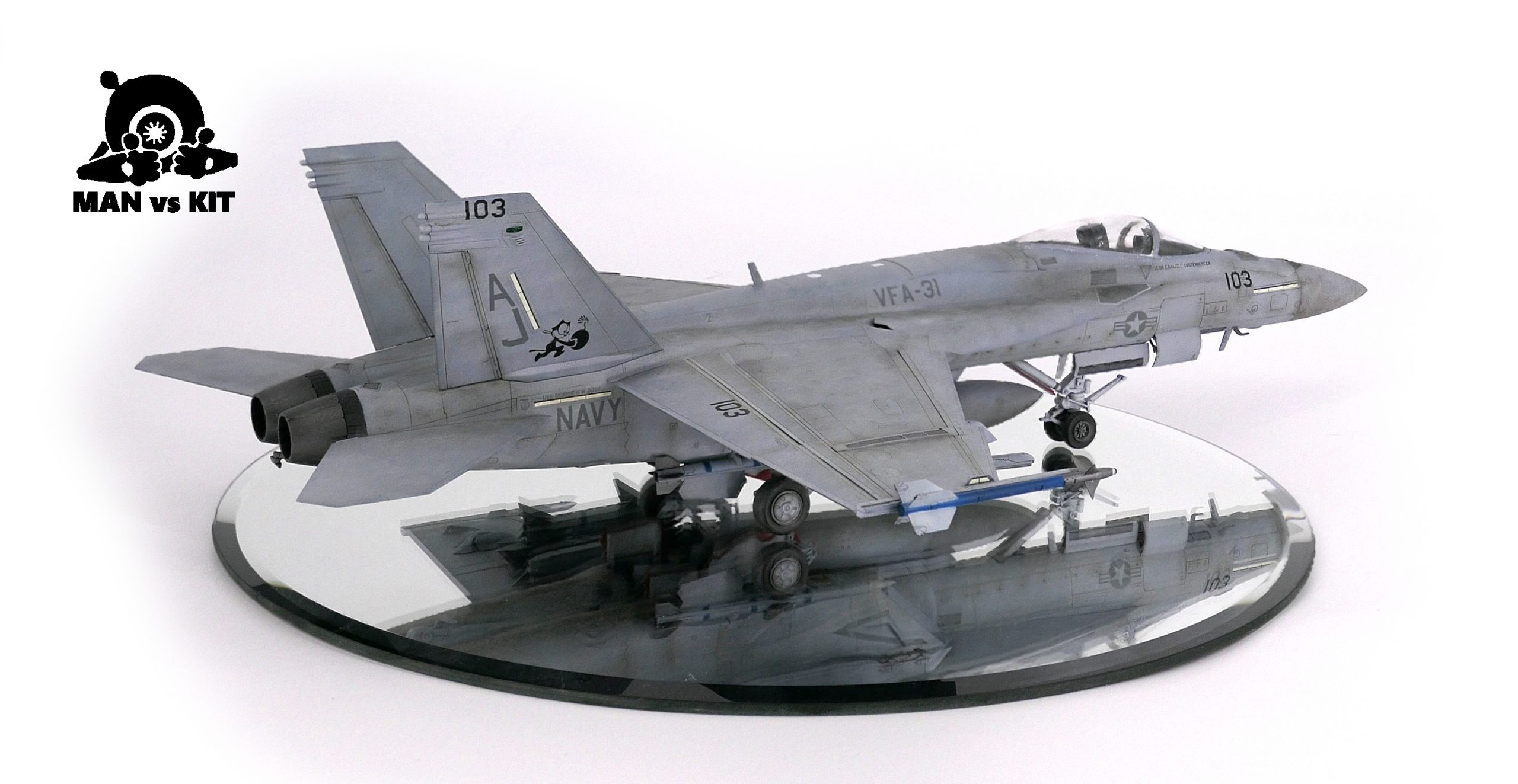 The complaint about the decals revolves around one missed opportunity and one unexplained weirdness.  The missed opportunity is that markings are provided for an aircraft from the flight that shot down the Syrian jet, but not the one that took the shot.  I’ve seen some complaints about this, and it’s pretty harmless really.  To me that’s the sort of thing aftermarket is there for.  The other is really odd: the kit provides decals for, ostensibly, Maverick’s aircraft from the new Top Gun film.  Except it doesn’t: this marking option has weird star-and-bar insignia that look like something out of a Marvel film, and (again only for this option) the word “NANY” throughout where it should read “NAVY”.  Really strange because they got the real-life schemes right.  We discussed this on SMCG and can only assume that there was a copyright issue with the film company.  If you want to do this version the fix is really simple: substitute in the regular star-and-bar insignia and correct “NAVY” text from one of the other schemes.

That’s not to say the kit is perfect: I have two complaints, neither of which is a deal-breaker.

The first is the prominent canopy seam.  Granted these are a fact of life with modern aircraft kits, but I don’t like them.  The problem is that most modern jets have canopies which bulge outward from their sills, and if you think about how an injection mould has to open, there isn’t really much of a way to avoid a seam somewhere.  My objection to this one is simply that it is a bit larger than is strictly necessary these days.

I know canopy seams can put people off jet kits because they look awful and are daunting to fix: the worst case of a scratched, barely-transparent canopy is so horrible that I used to think leaving the seam was the lesser evil.  However, it turns out that with the right tools these are actually really easy to get rid of and I just want to take a quick detour to share this with you.

The first step is to scrape the seam off, with the edge of a knife blade, or sand it off with some smooth sandpaper (Tamiya’s 600 or 1000 grit work well).  Then it has to be smoothed down, which is pretty easy if you sand it sequentially with Tamiya’s 1000, 1200, 1500, and 2000 grit sandpaper.  I like the Tamiya stuff because it doesn’t scratch even when new.  Then the magic (and I’m probably the last person on Earth to discover this, but whatever) happens with Tamiya’s two-step polishing compound and one of their little sponges.  Just dab a little of the compound on the sponge, and rub until it seems as smooth as it’s going to get.  Repeat with the other compound, and with any luck you’ll have a canopy that is almost as good as new.  I actually had to do this twice on this kit because I messed up a bit while trying to get some adhesive off.

My second objection is the canopy mask Meng provides.  This fits well and I was very happy – especially as I appreciate a kit providing these – until I came to remove it, at which point I found it had left a lot of sticky residue behind.  Again just a tip: this comes off very easily with white spirit.

A small and less annoying issue is the ordnance provided.  These aren’t bad, but I feel they could have provided a better range to model more representative combat loadouts.  Meng’s AIM-9s are interesting: I wasn’t convinced by the clear seeker heads, and having to stick the fins on isn’t my idea of best fun, so I pulled out one of the leftovers from the AMK F-14 instead, along with an AIM-7. 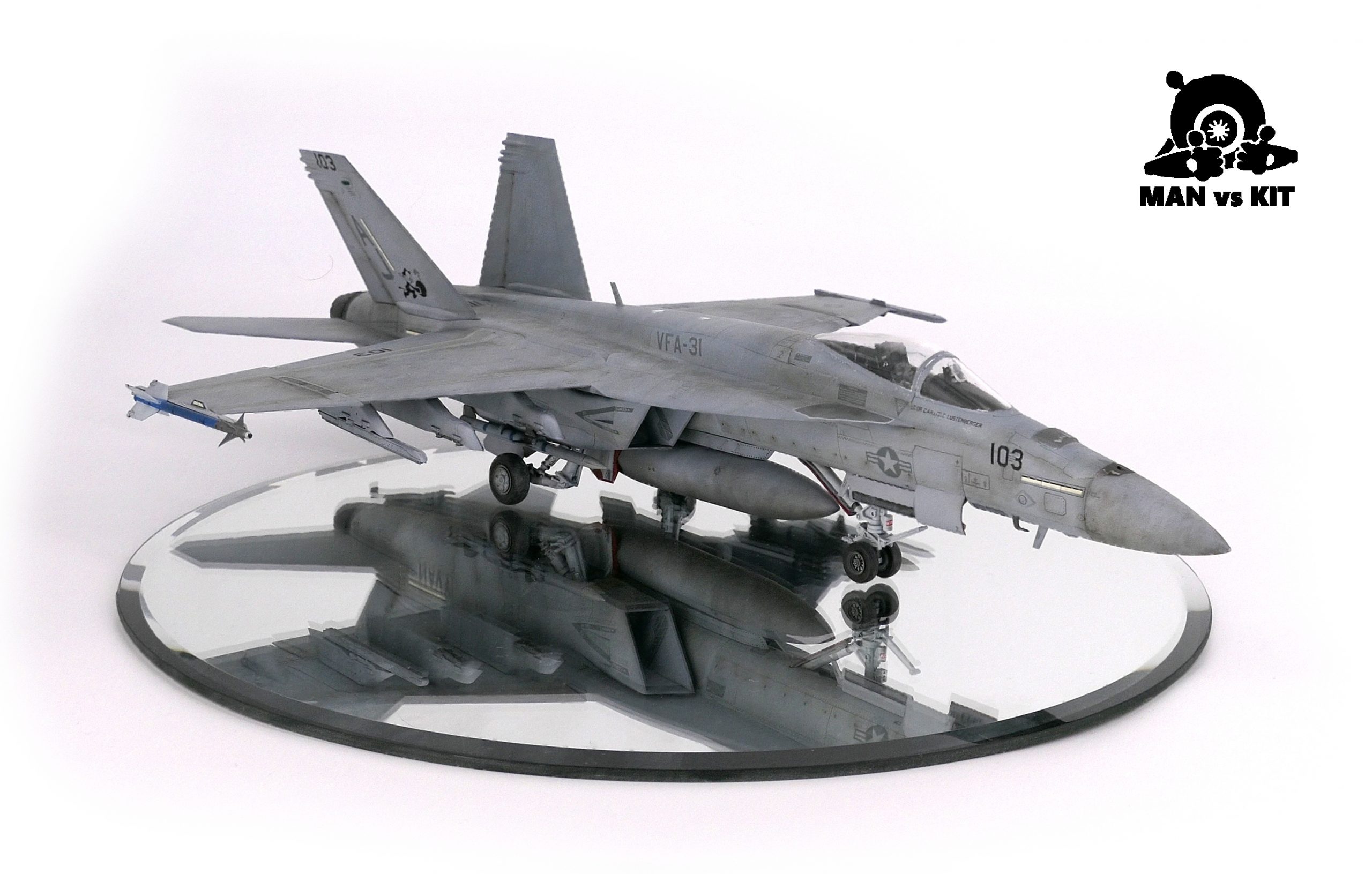 The only thing I added to this kit was a set of seat belts.  I opted for the new Kitsworld 3d-printed decal ones, which I wanted to try out.  The best aspect of these is that they are pre-coloured which reduces the paint work.  Unfortunately that’s about as much that impressed me about them.  Maybe I just haven’t found out how to apply them best yet, but I found the belts were a bit too thick, and they don’t like to conform around corners.  I haven’t found an adhesive which can hold them at interesting angles, and they react very badly (by melting) to setting solutions. 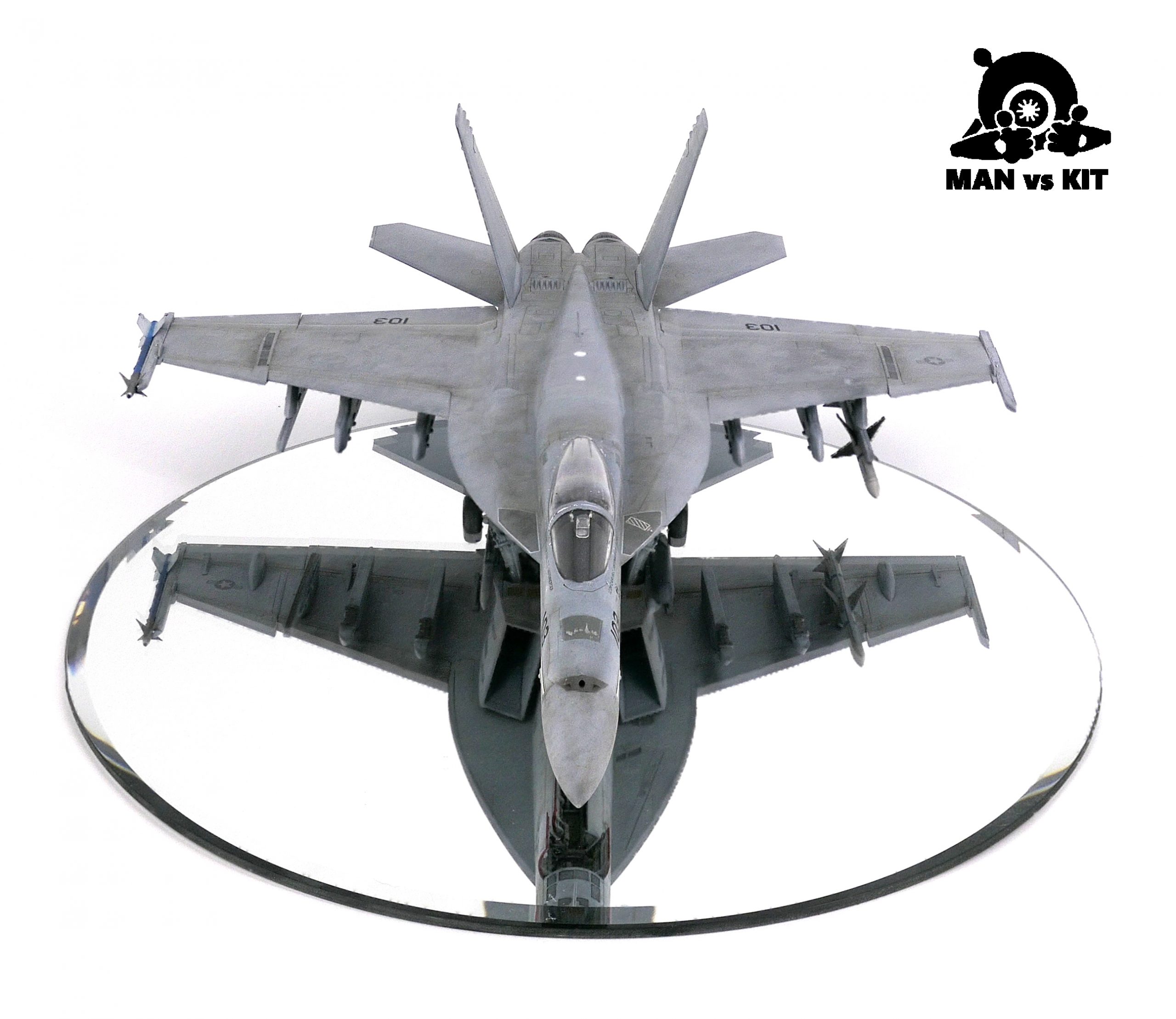 I’ve had some people ask how I do my weathering: this one came out nicer than expected so I’ll walk through the process quickly. 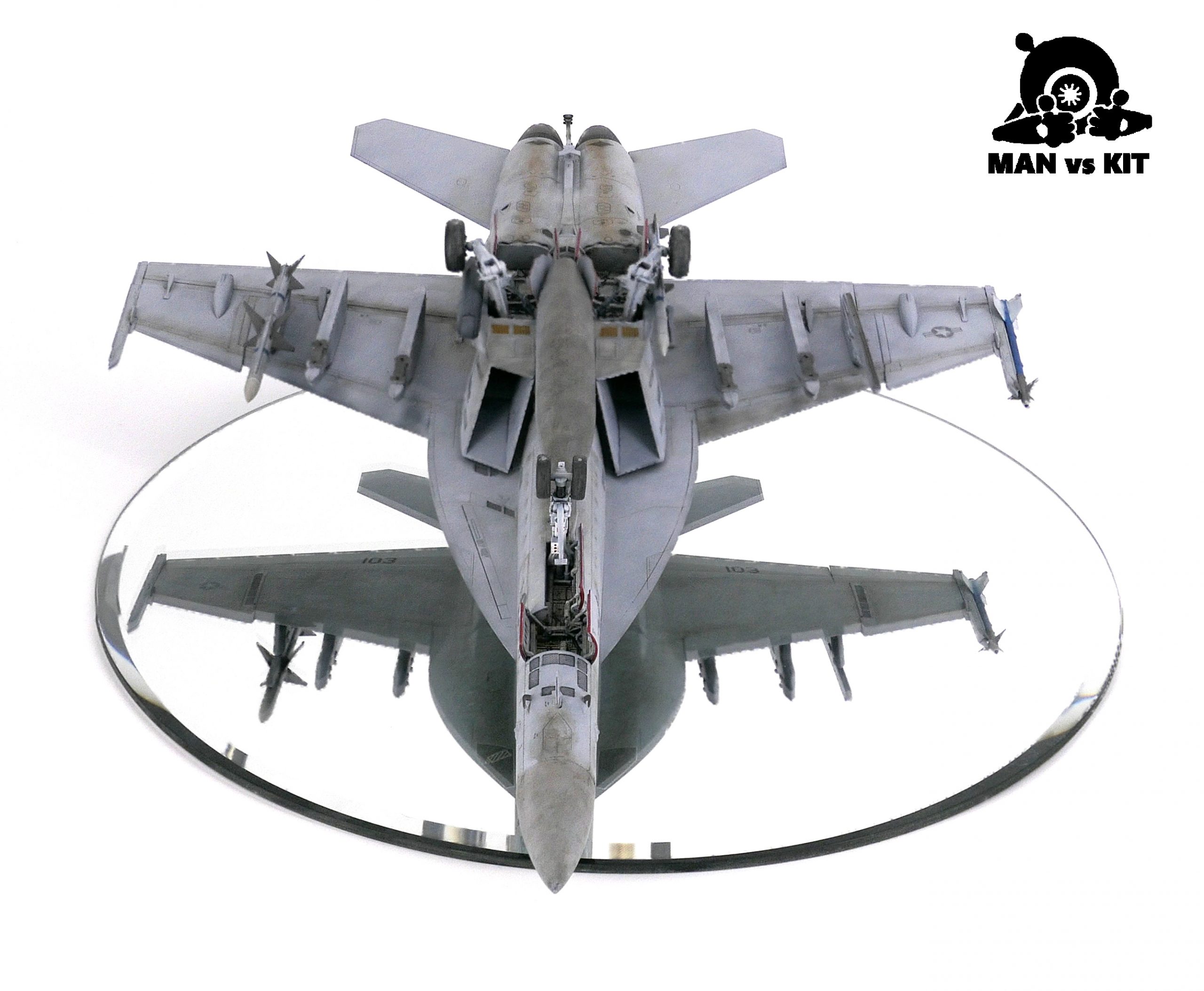 Overall, this is a really nice kit.  It’s a bit like the Kinetic 1/48 F-104, being nicer than you might expect and showing that the manufacturer is trying to improve things.  I liked it, and would happily build another, though if I were to it would probably be the F model two-seater. 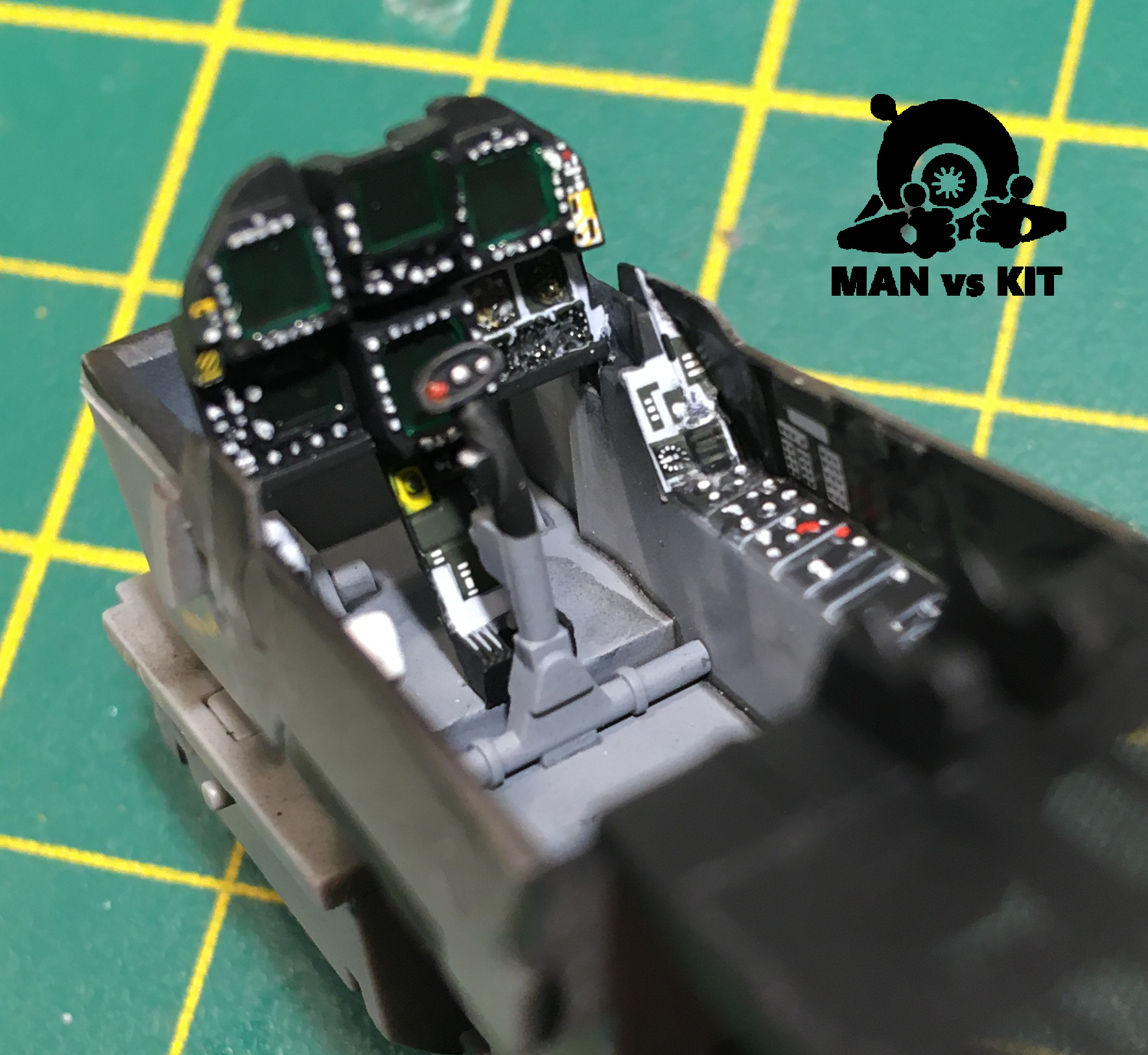 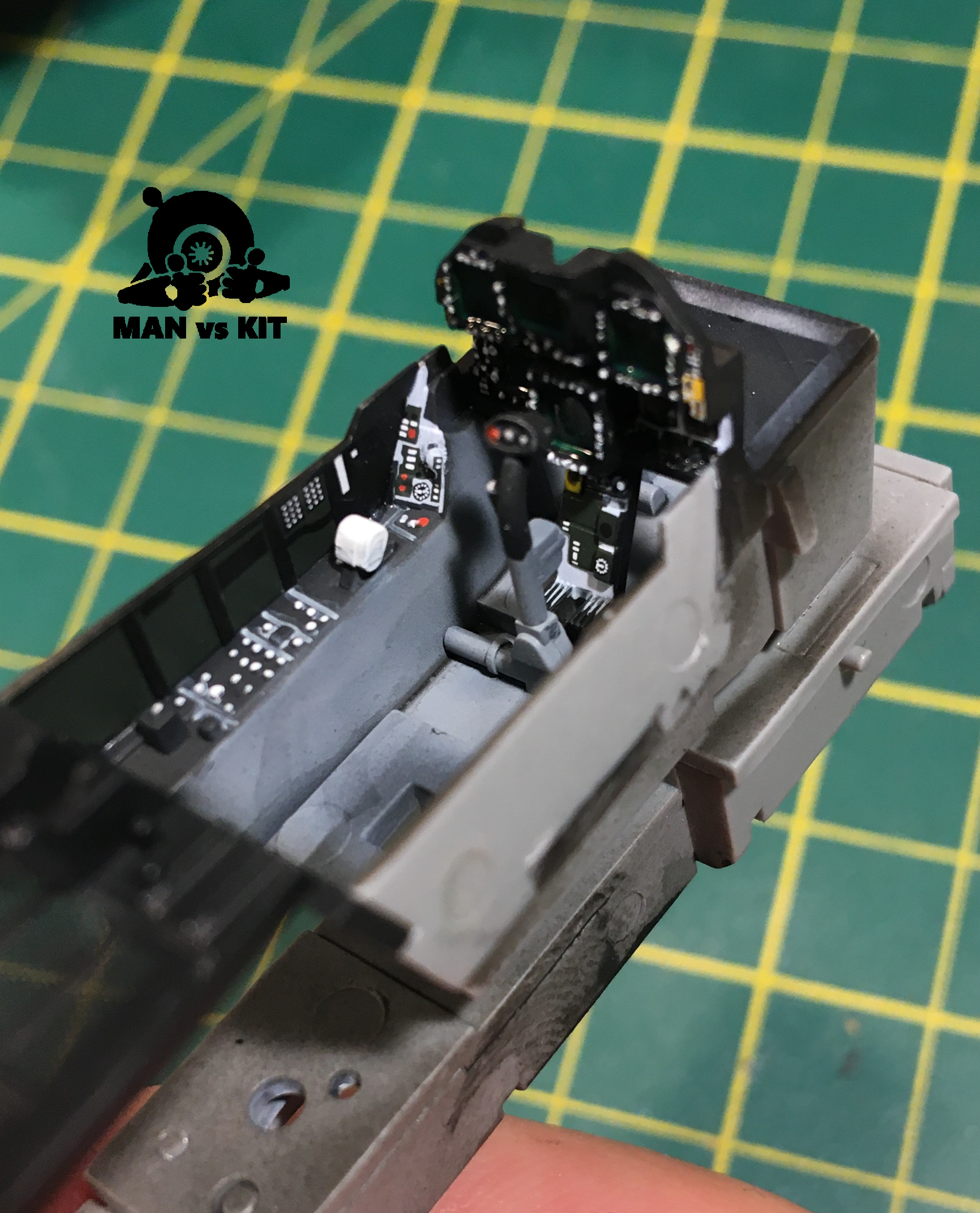 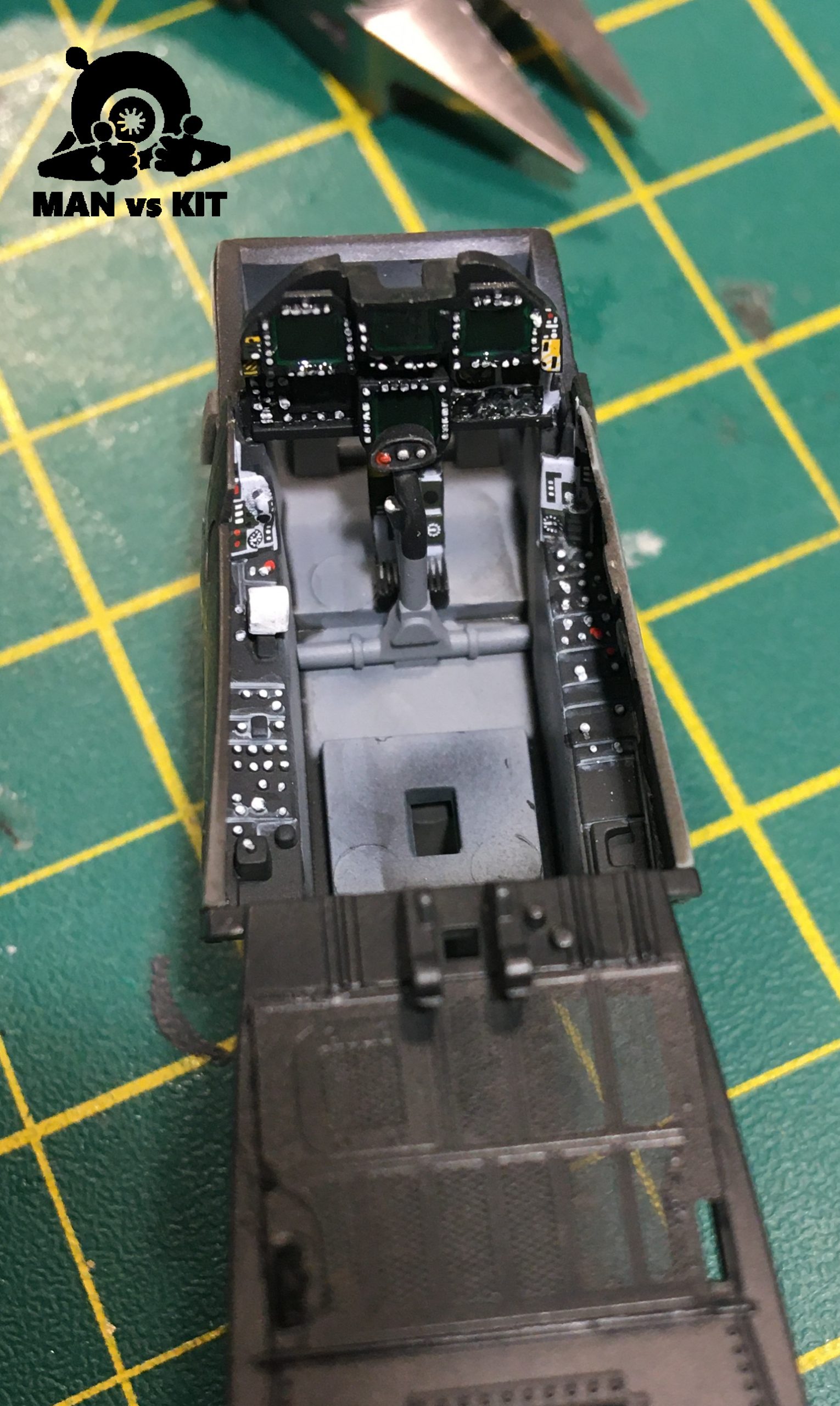 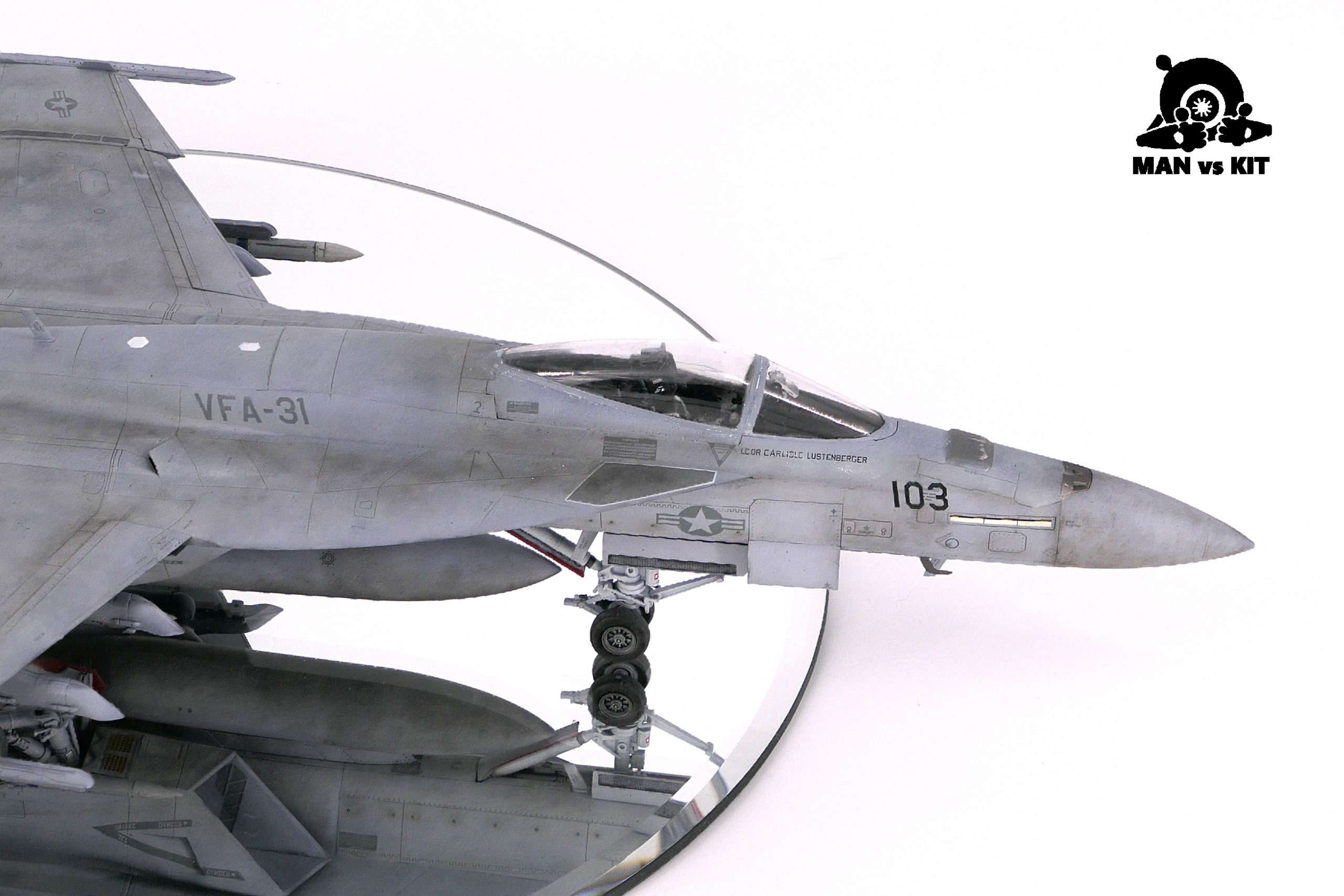 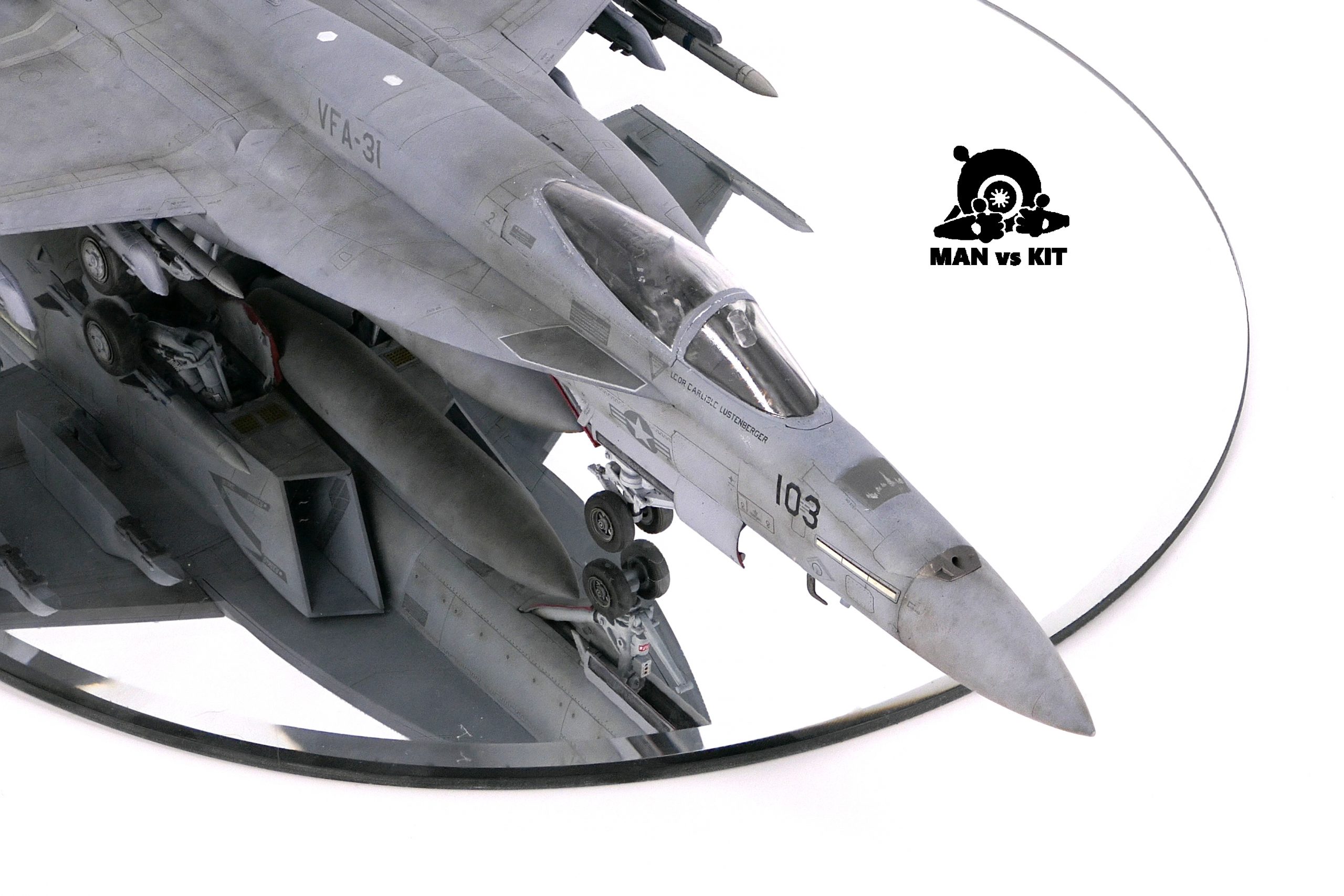 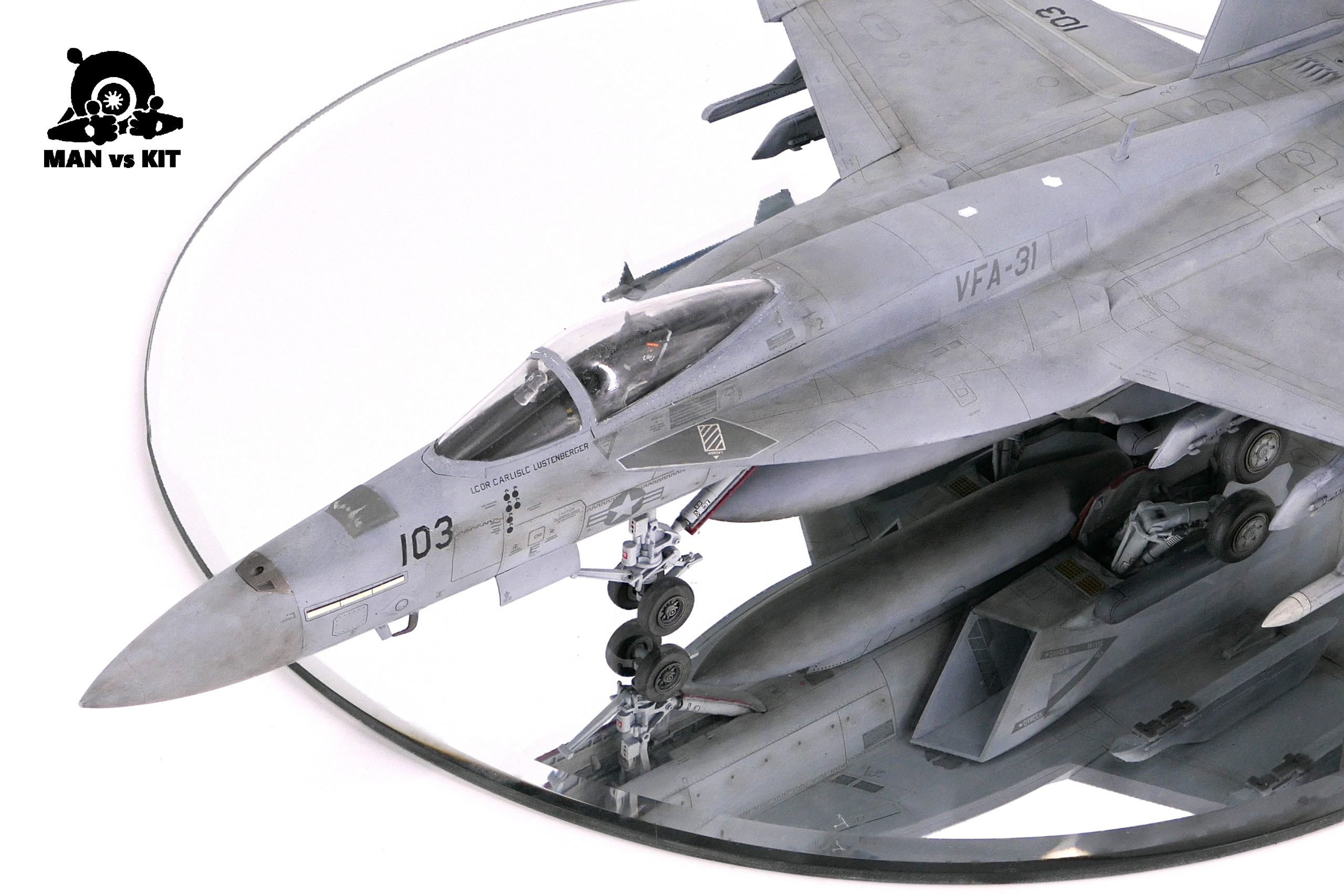 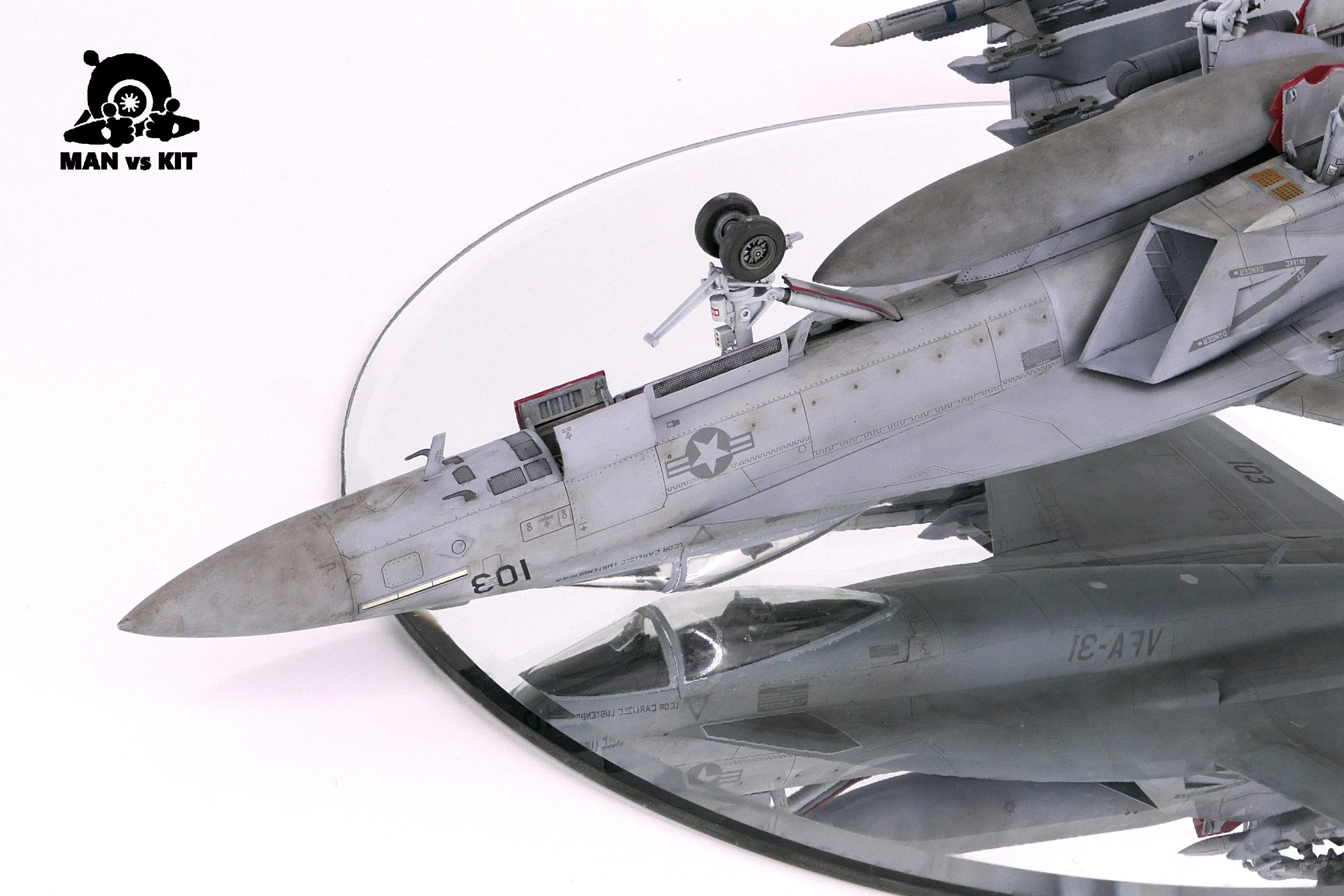 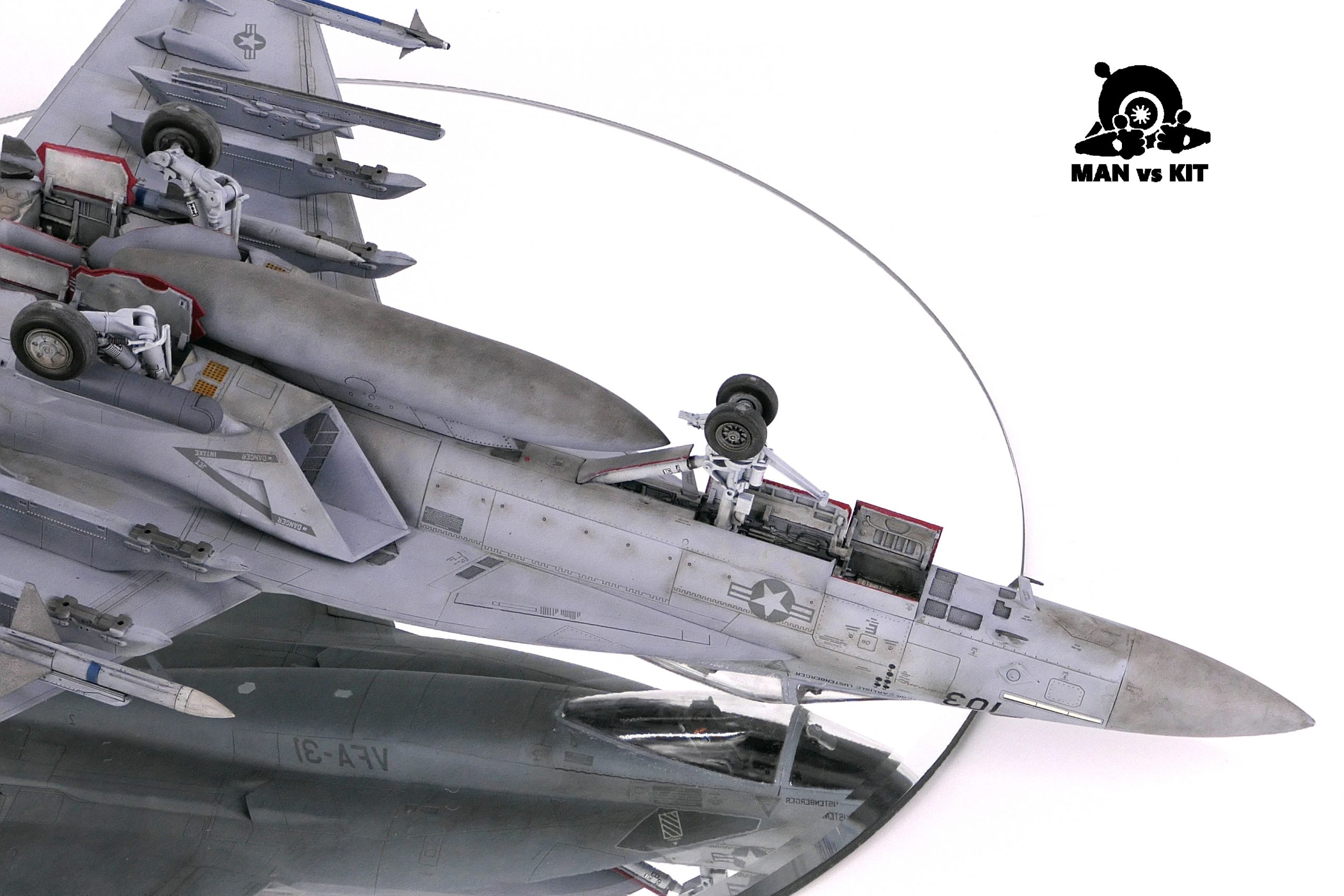 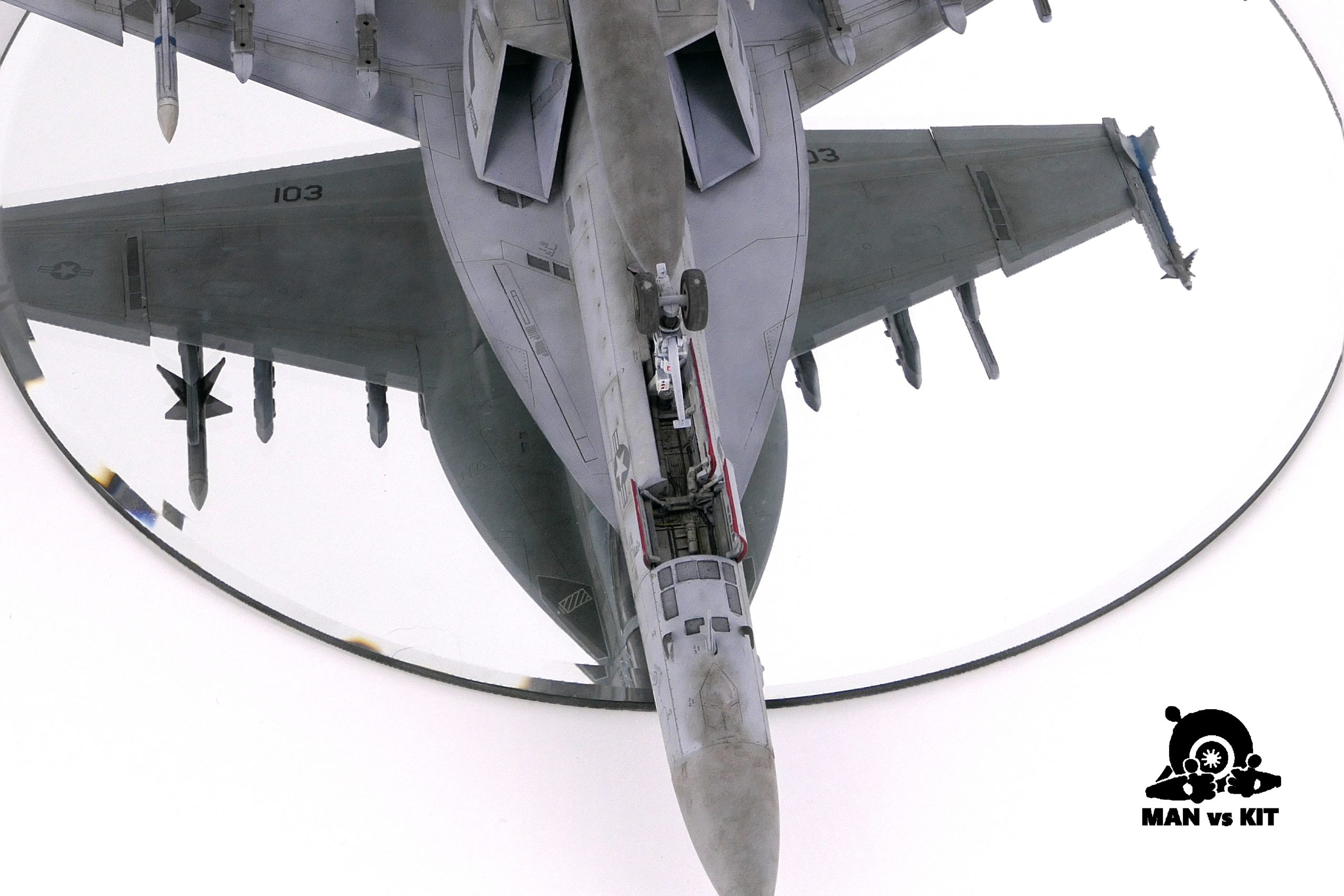 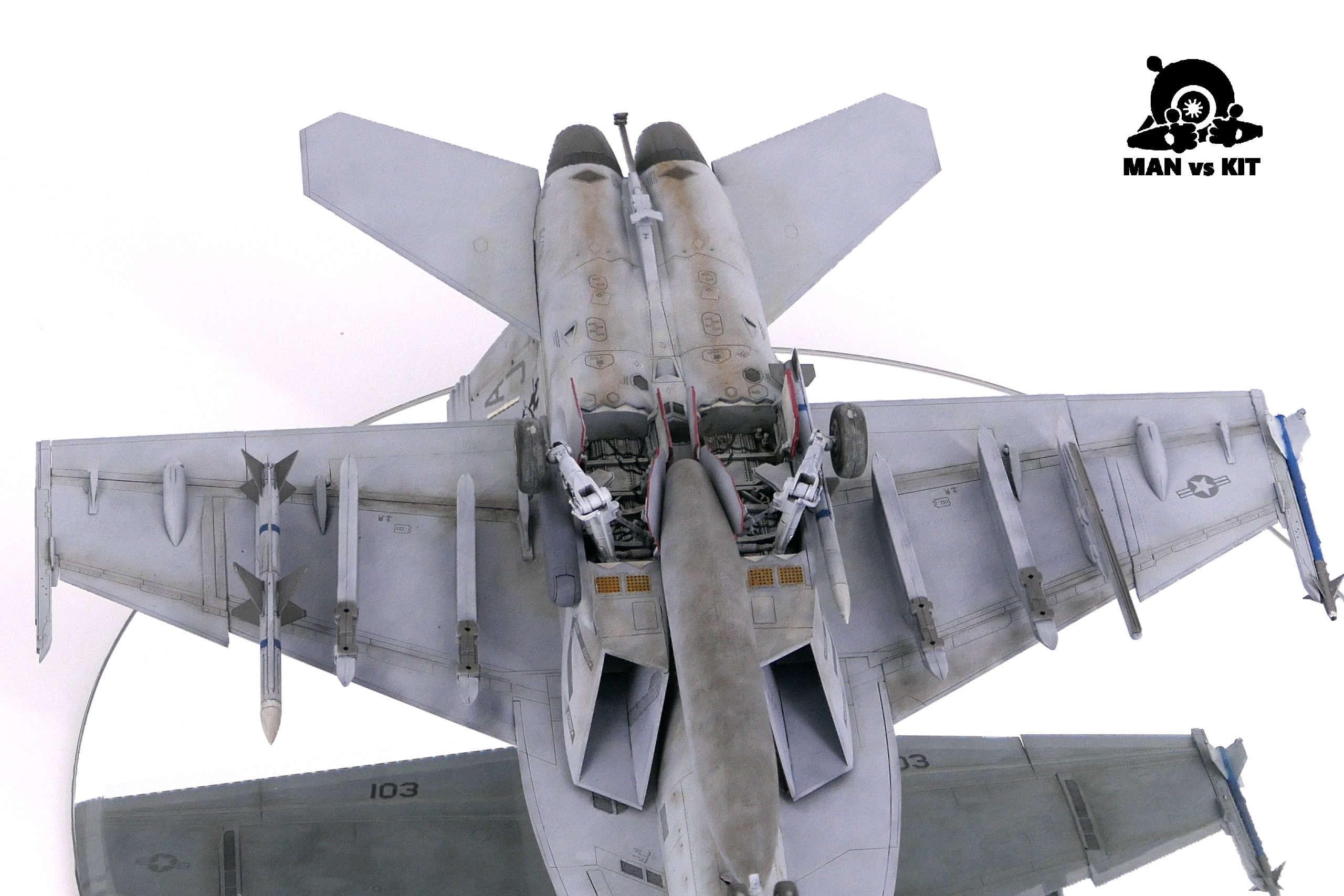 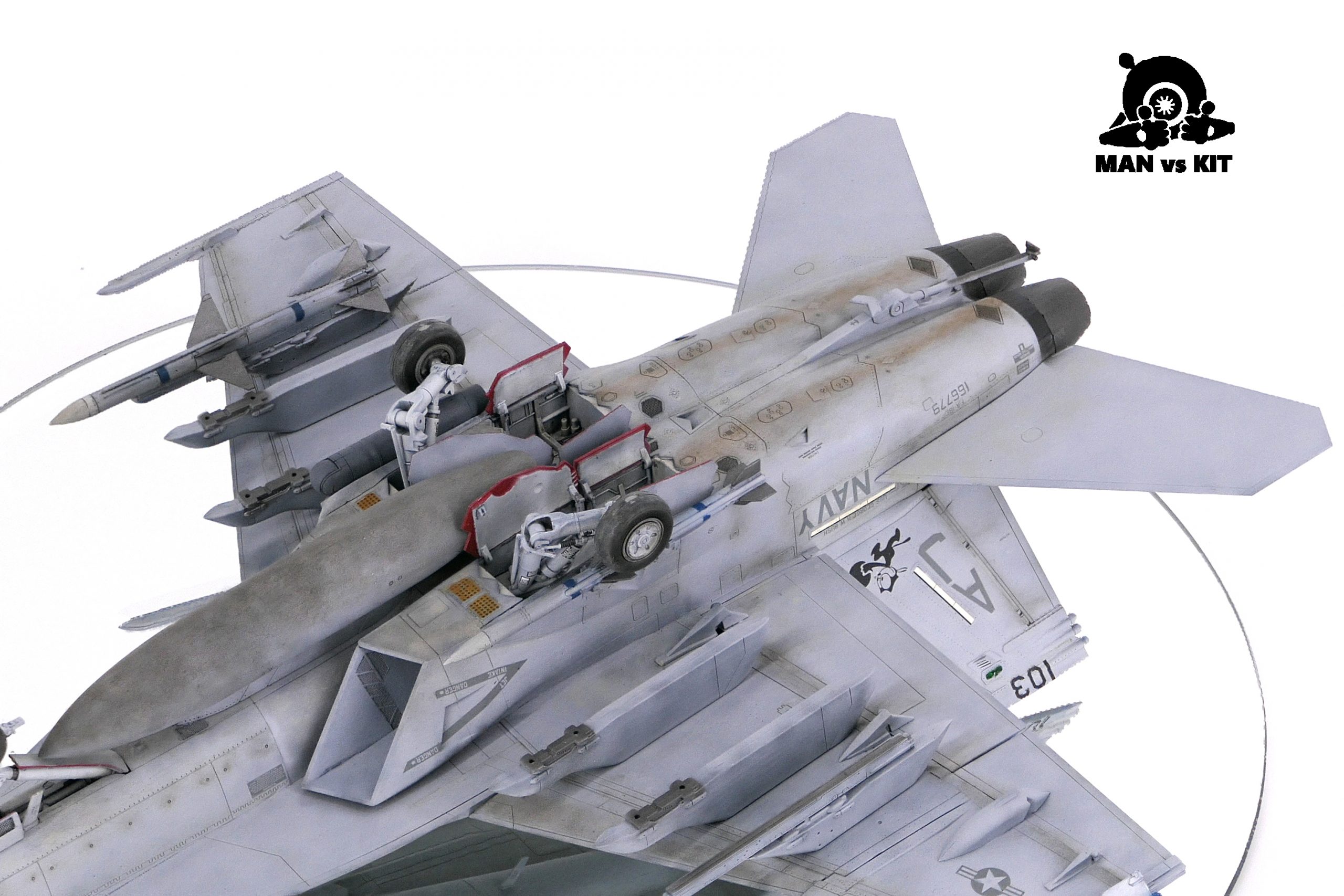 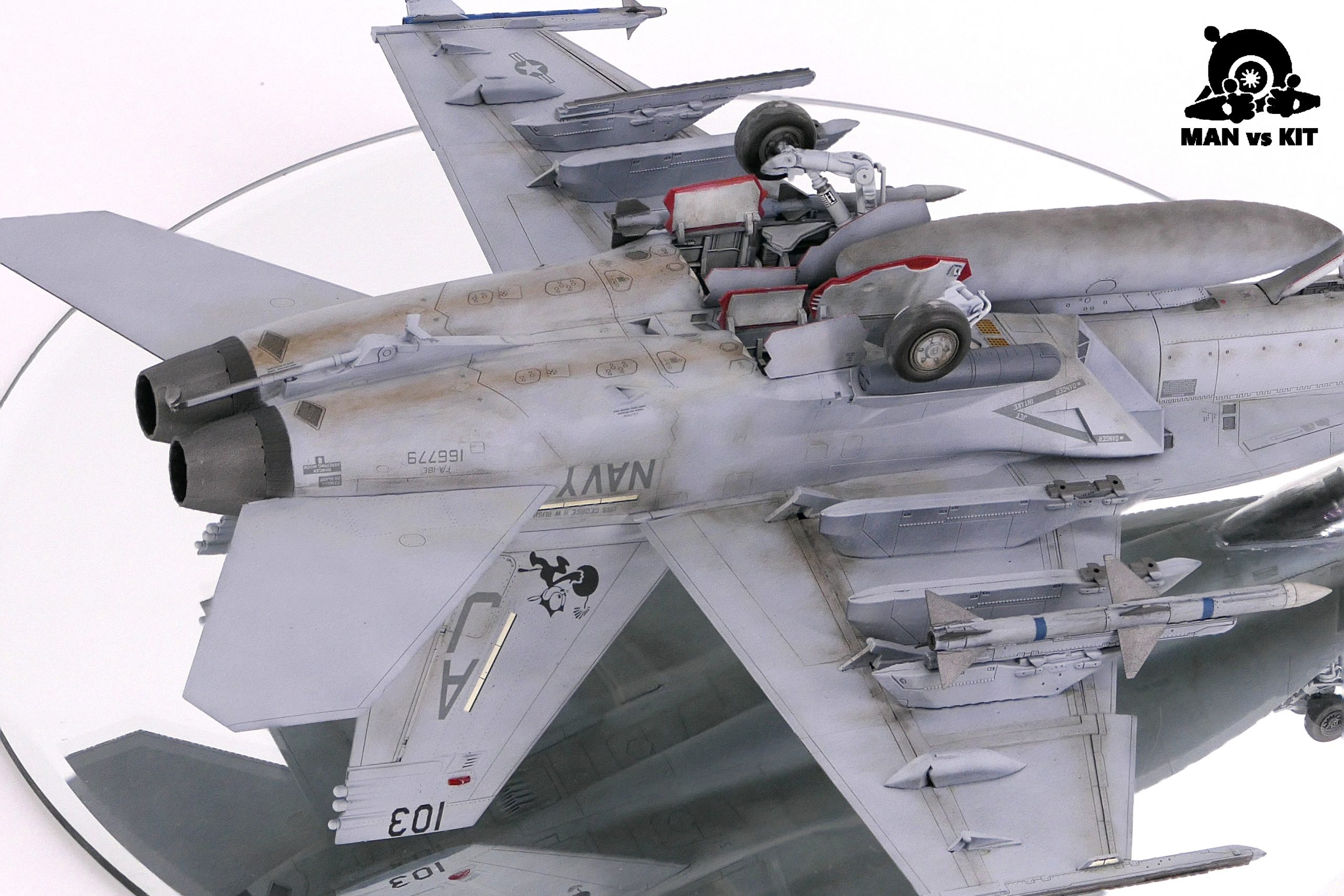 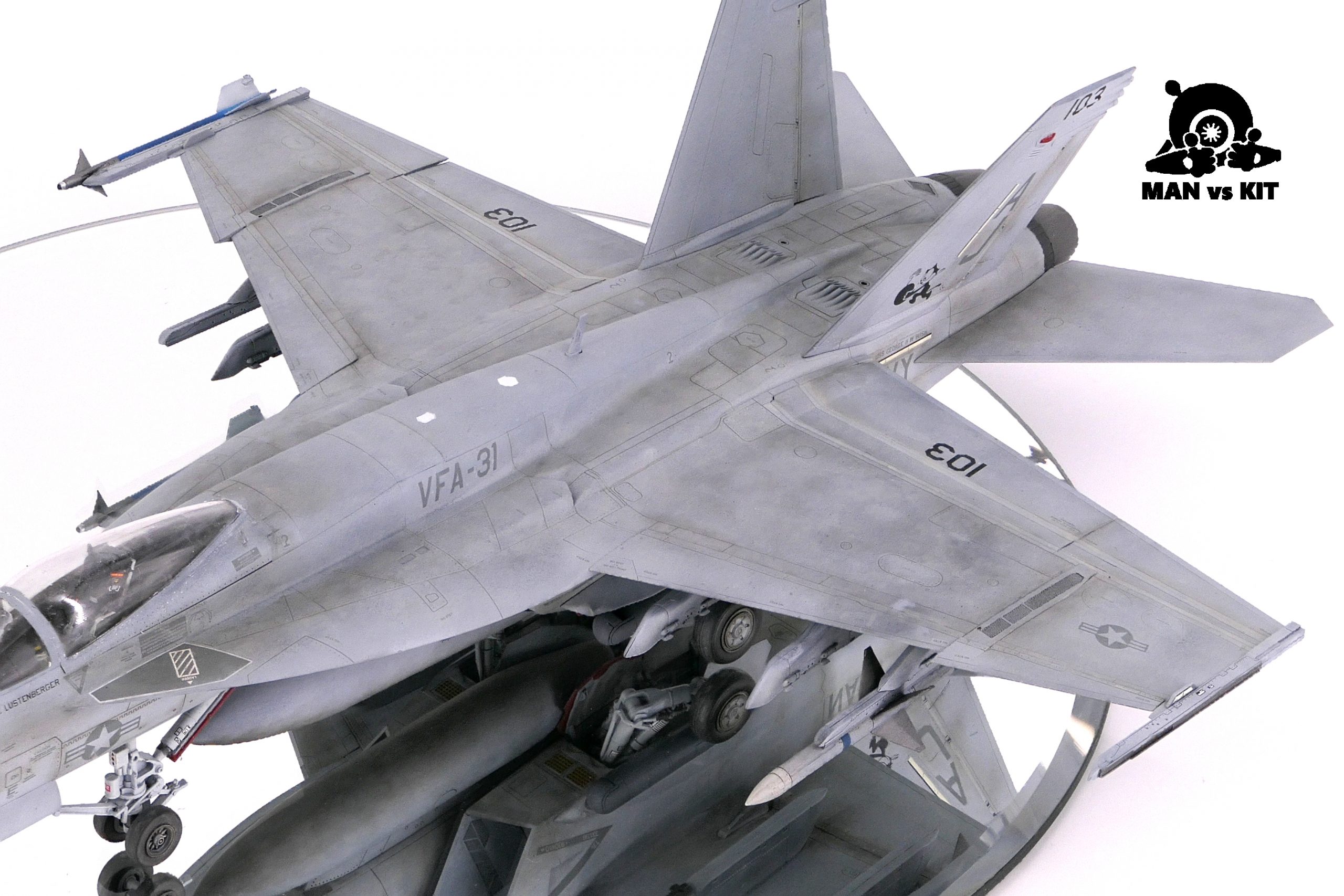 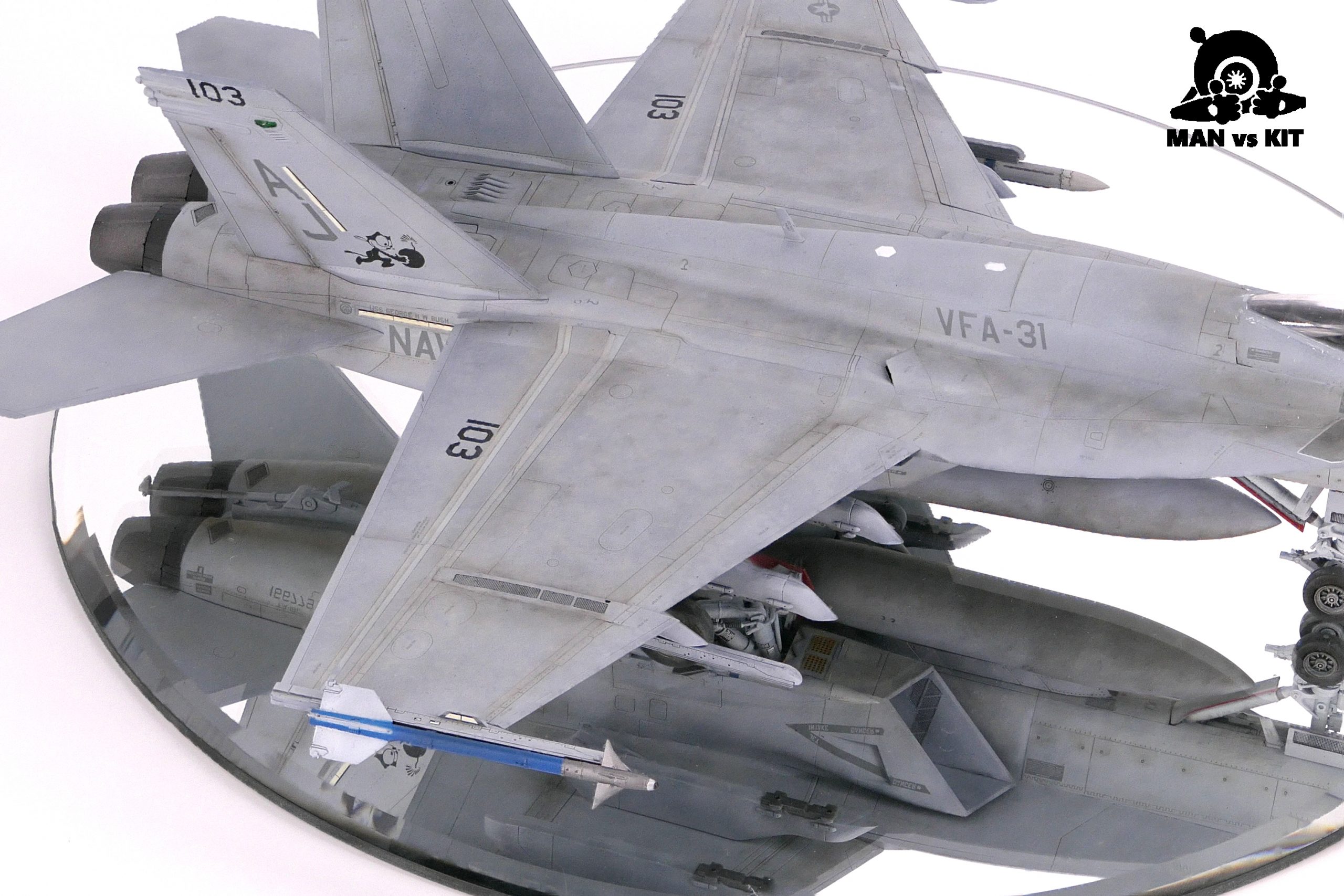 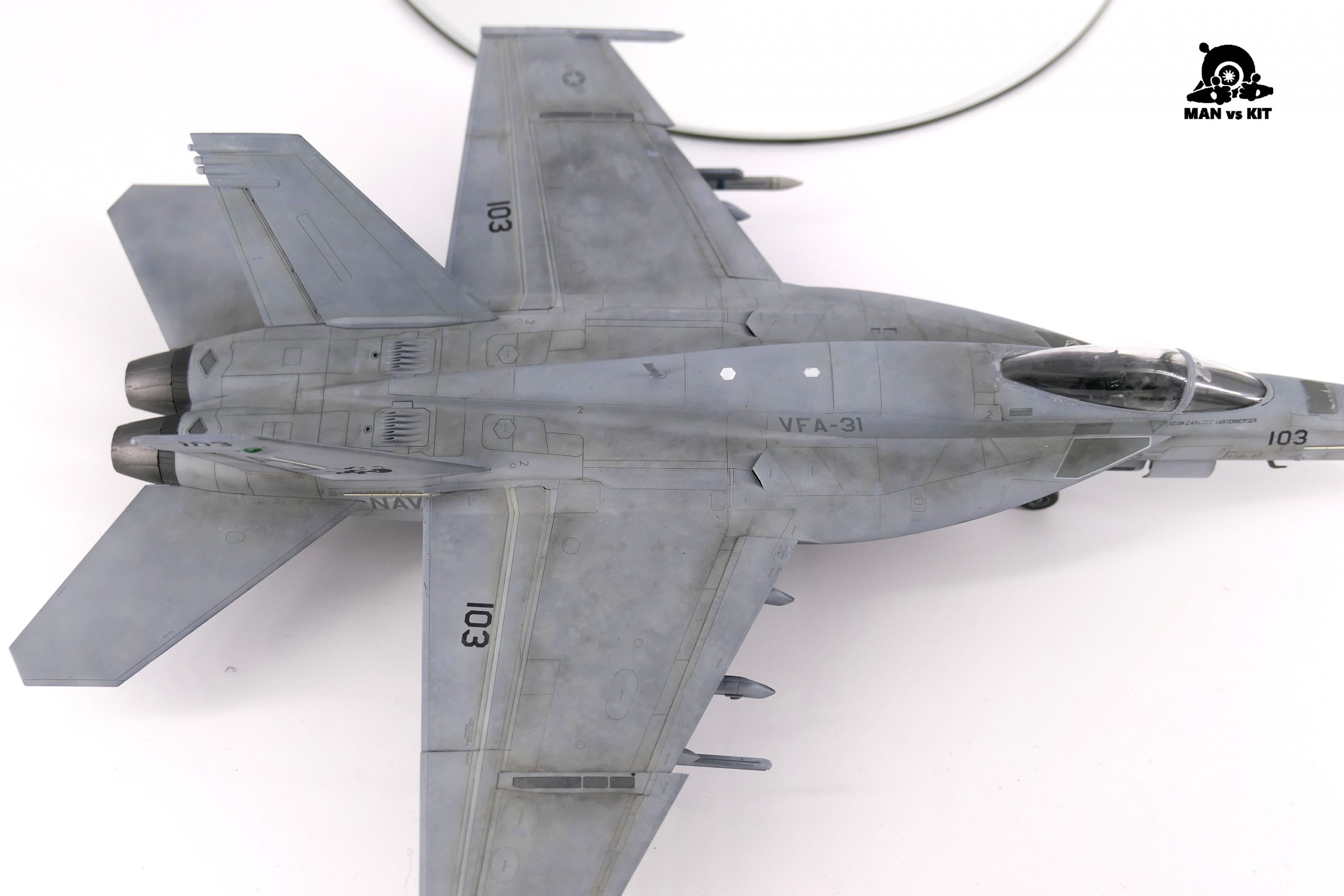 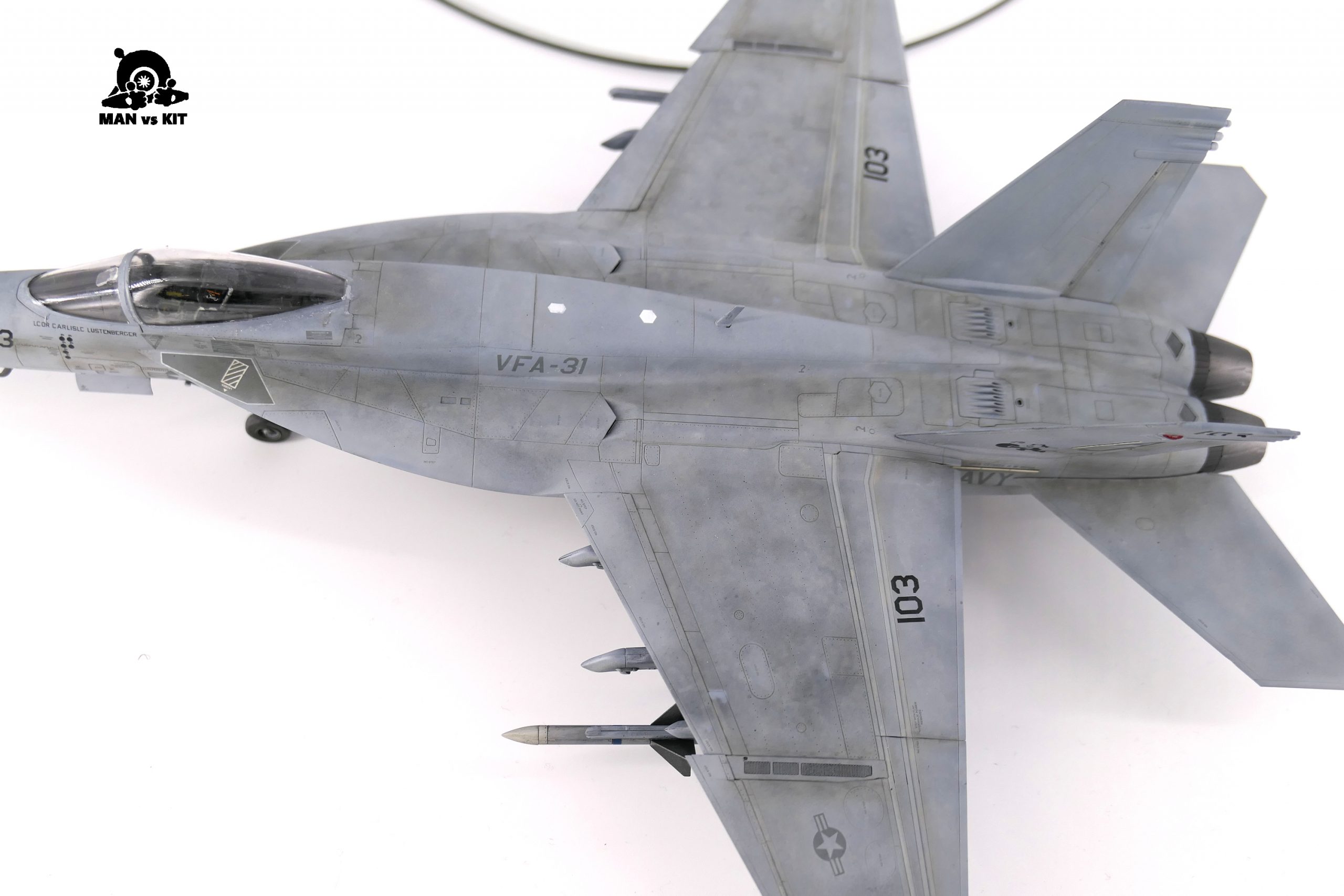 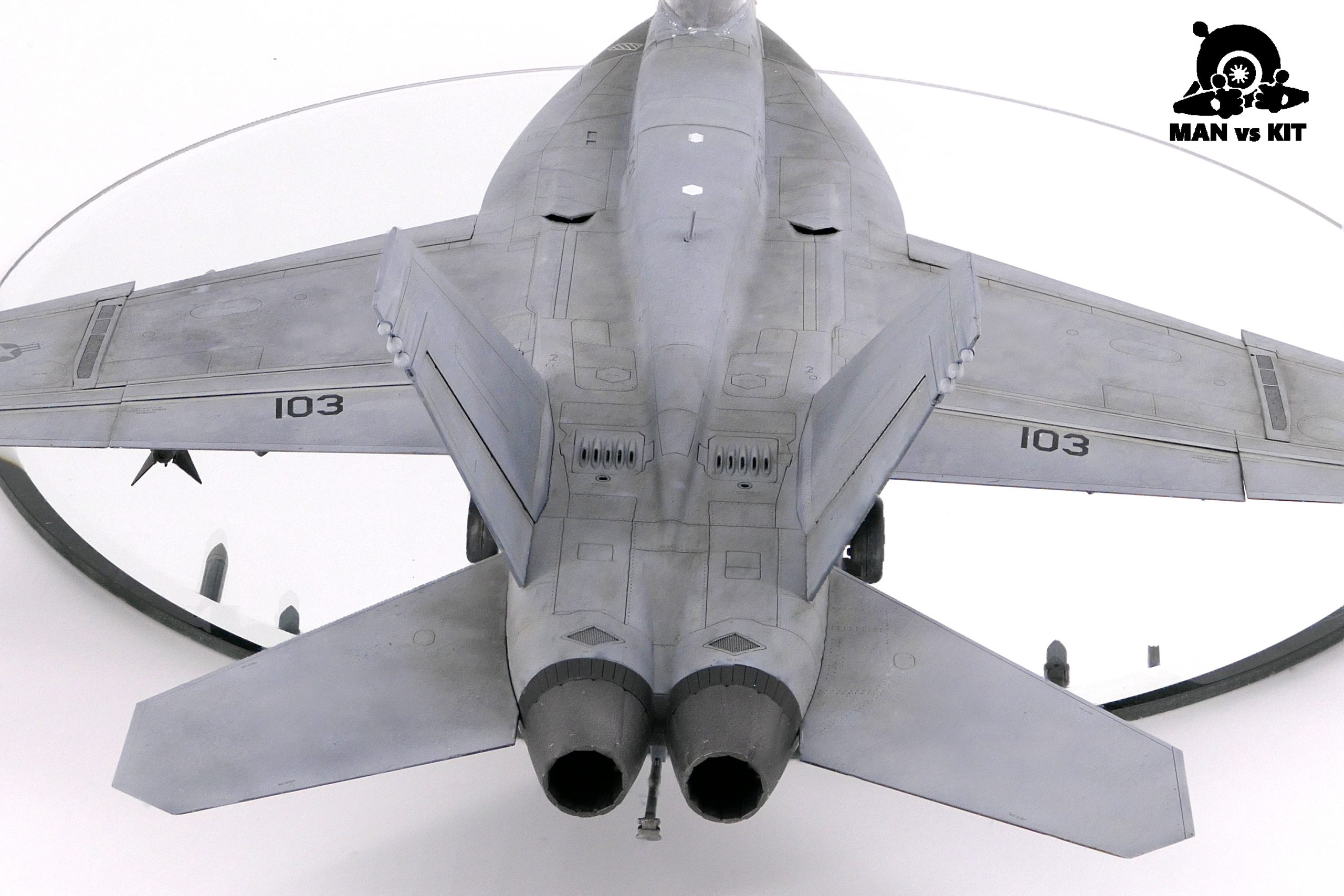 Very nice Tom. One other item I found with this kit is the outboard “boat” fairings under the outer part of the wings are supposed to have a lense on the front for the navigation lights which Meng missed. A decal would have sufficed. I enjoyed this kit also and wanted to do mine in the VX -9 Vampires which are based at the weapons test center at China Lake California U.S. I obtained the decals from Draw Decal and proceeded to put them on the model. The biggest challenge was the large vampire bat located on the vertical tail and fuselage side. Draw decal tells you in their instructions that their decals will curl up if you aren’t careful. The vampire with all its various appendages quickly demonstrated that fact. Persistence pays off however and I finally got it to comply. Much easier on the second one. I purchased Meng’s FA-18F but haven’t started it yet.

Glad to hear you got the decal to comply in the end.

Forgot to add to my previous comment, thanks for the explanation on how you did your weathering. Very helpful and looks great!