Another year, another group build, another regrettable purchase?  Welcome to my in-box review of Trumpeter’s MiG-17, in 1/32 scale.

I don’t do a lot of in-box reviews, but this kit didn’t have many reviews so I figured a first look might be helpful for people.

Just a few words before we start: this is an old kit, and one of Trumpeter’s first.  It also cost £22.10 including postage, which is the sort of money I associate with a 1/72 kit.  Without having even started, it’s obvious that this is not going to be a good kit.  I am not going to make excuses for it: I will take the price into account when discussing its completeness, the options presented and the level of detail; but I will assess its competence as I would any other kit.  Oddly, that actually kicks this kit both ways: where I would help it out, it doesn’t need it, and where I won’t, it does. But equally, I really dislike the way people jump on Trumpeter for mistakes that wouldn’t even get mentioned from other manufacturers, so I will be fair to the silly thing. 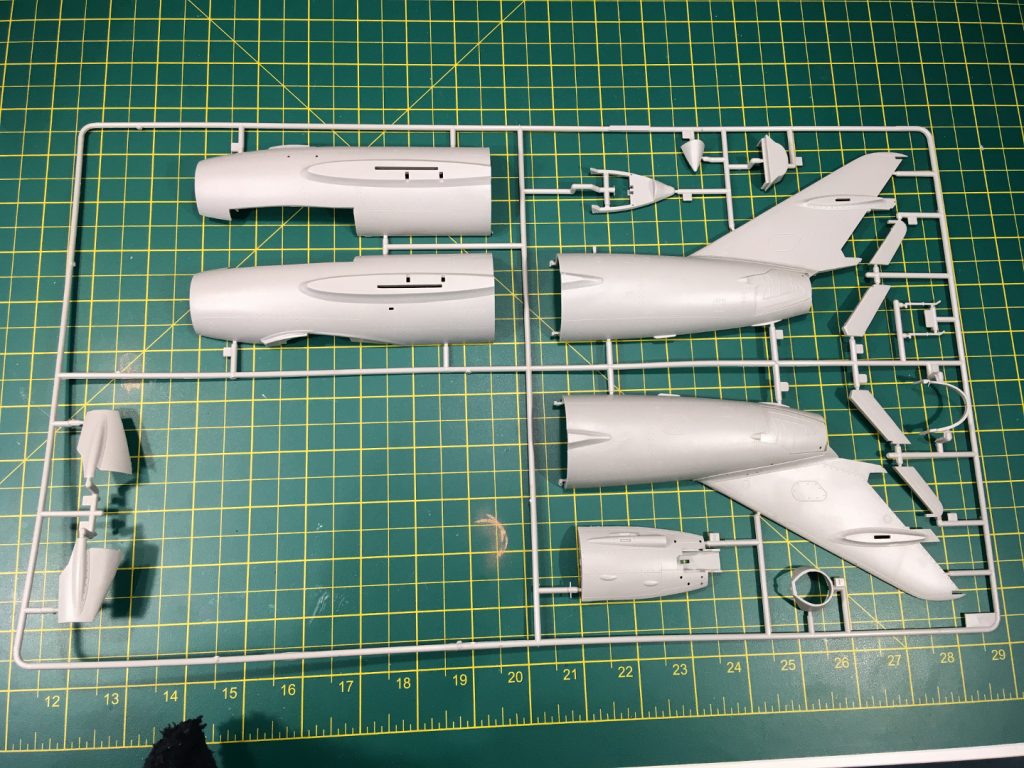 The MiG-17 was an evolution of the highly-successful MiG-15 design.  Retaining the same basic configuration and armament of the MiG-15, the new version introduced a wide range of upgraded parts to improve performance in the troublesome transonic speeds.  The most prominent are the longer fuselage, greater wing sweep, and redesigned tail.  While retaining the 37mm and dual 23mm cannon armament of the MiG-15, the MiG-17 introduced a radar-ranged gunsight and later models added a search radar for all-weather capability.

Though the MiG-17 was not sent to the Korean War, due apparently to limited numbers, it was exported to China and Vietnam, where it notably saw combat, and the list of operators reads as a Who’s Who of Warsaw Pact and Soviet client states.  It reportedly remains in service to this day with the air forces of Guinea-Bissau and Madagascar, and several remain flying in private hands.

I bought this kit along with Kinetic’s 1/32 F-86 Sabre for the upcoming “Early Cold War” group build in the Facebook group, “Cold War Model Masking and Photos”.  I’ve enjoyed their last two group builds and this promises to be a lot of fun. 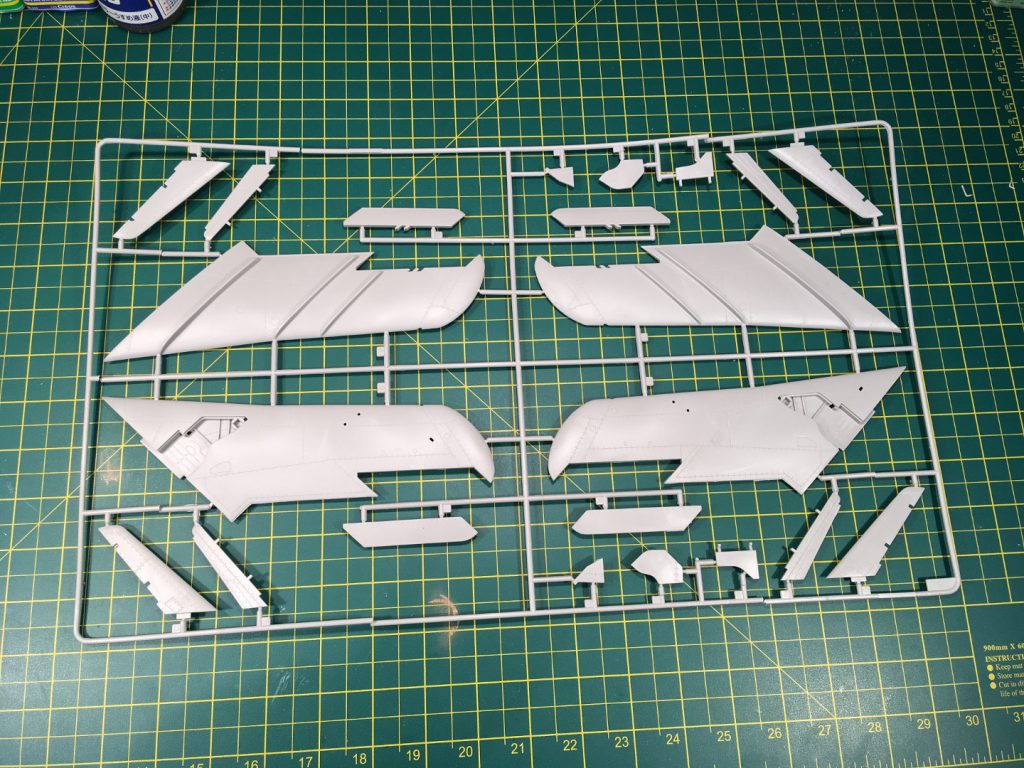 Based on a Scalemates search, this might actually be Trumpeter’s first 1/32 aircraft kit.  It dates from the mid-to-late 1990s and is a simple kit consisting of five sprues, including the clear sprue and one devoted entirely to the engine and rear fuselage dolly. 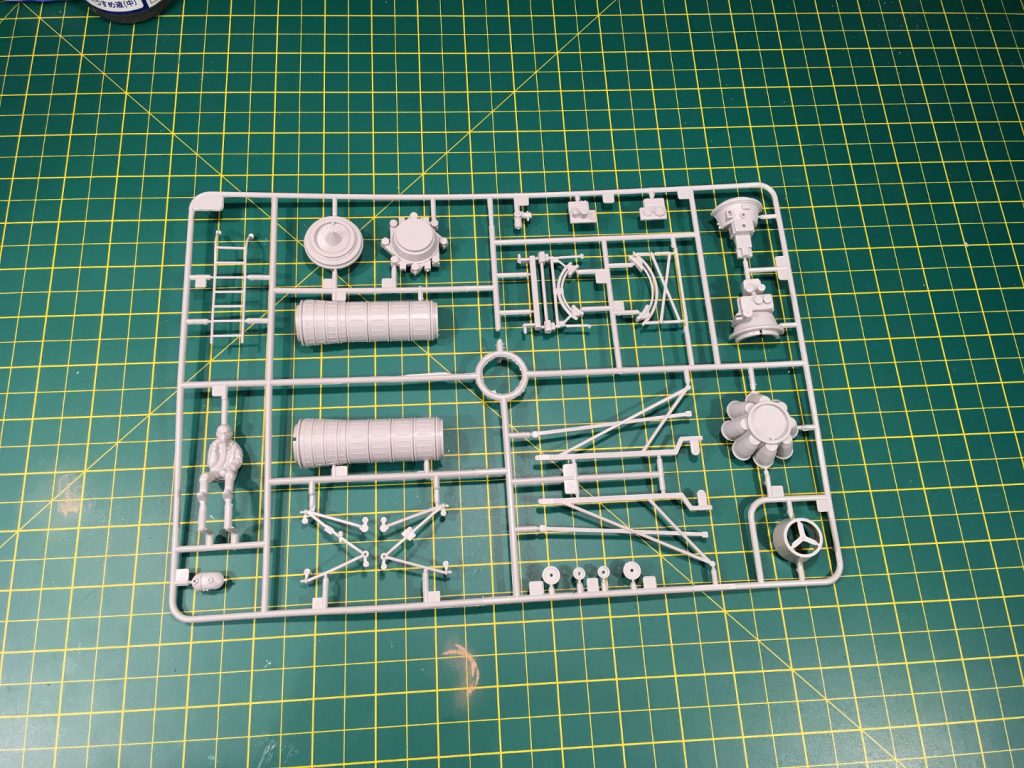 You get a lot of options.  This kit includes the parts for the early day fighter, as well as two different radar noses and the option of original or radar-bulged intake splitter.  The kit also includes the second seat and rear cockpit instrument panel for the two-seater, but a different front fuselage would be required.  It also has two pilot figures, which look pretty nice, but as so often the case aren’t interestingly posed. 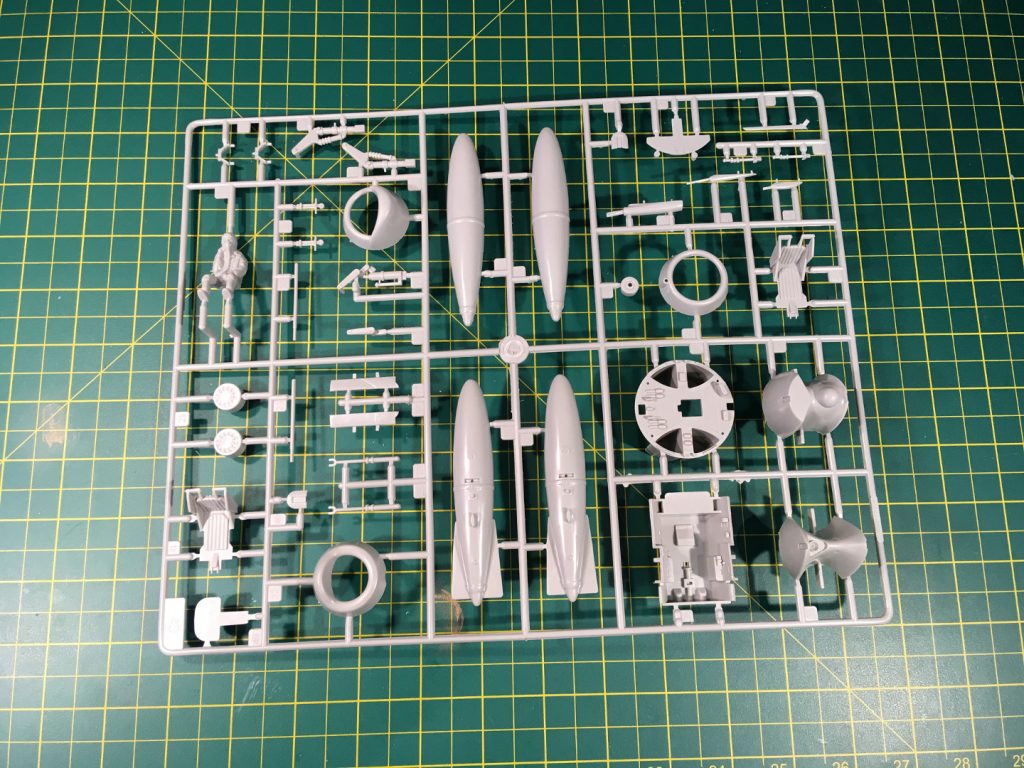 Underwing fuel tanks are included, and are somewhat de rigeur, because large and prominent holes have been pre-drilled in the wings to take them.  Filling those will be a pain.

The cannon armament is represented in simplistic parts which would nonetheless look reasonable if you cleaned them up a bit and drilled them out.

The cockpit is very simplistic, but the dials for the instrument panel are actually quite nicely moulded.  I can’t say the same for the rear cockpit, but we don’t use that so no big deal.

The rest of the airframe continues in that vein.  Details are engraved, not especially fine but I’ve seen worse from far more modern kits, relief detail (like wing fences) are on the thick side, and rivet detail is present for the major lines.  One thing to note is that Trumpeter have been quite restrained with their rivets and lines: if you look at one of these aircraft which is actually bare metal (many photos show a metal paint, more on that later), it’s clear that there are a lot of small rivets which are far more subtle than this tooling could achieve.  Rather than clutter it up with them, Trumpeter appears to have stuck with just those which are visible on period photos of lacquered or camouflaged aircraft.  Personally, I think that’s a decent decision: if you’re lacquering the aircraft you need to remove the others anyway.

Forgot to mention, the kit comes with vinyl tyres.

A small decal sheet is included with PLAAF markings and a set of numbers so you can recreate any aircraft that doesn’t have repeating digits in its Bort number.  Forgot to mention, the instructions look simple but should be easily sufficient, and are laid out in a nice, spacious fashion.

In terms of what you get in the box, this is a lot of aircraft for not much money.  Unfortunately, we have to consider how this thing will go together. 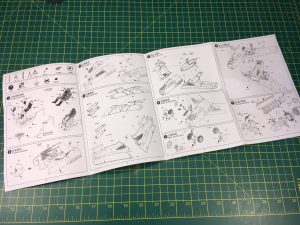 When you look at the sprues, you’ll notice that we have a six-part fuselage: left and right forward fuselage; left and right rear fuselage; nose, uh, torus; and the plate that goes underneath with the guns and stuff mounted on it.  I decided to nip the four fuselage parts off the sprue and see how they go together.

The forward halves actually don’t want to align in any way: you can have the top or bottom join but not both, and a quick test fit of the splitter suggests it’s because there’s a lot of room in the front.  The back is better.

Our next problem is that the front and back fuselage are barely on speaking terms.  The profile is quite different, and that’s going to take a fair bit of squeezing to hope they fit.  This is not made any easier by the fact that it’s a butt join: there is no reference surface or ledge, or pins, anything that would make this actually possible to line up.  The wing join looks challenging as well, but not on the same level.

There is one thing: the rear fuselage has a pair of hooks which look like they line up and hold it onto the front.  However, only the bottom of the front fuselage has a corresponding part, and regardless, it’s impossible to attach the two if you follow the instructions, because once together, you can’t attach the two fuselage halves.  A funny aspect to this is that the instructions tell you the exact length of stick you will need to prop up the rear fuselage, but not how much weight the nose needs.  Oh well.

The problem here is one that we see a lot from the newer companies: an idea that everything that could be displayed should be displayed, so you end up with every panel designed to be displayed open, the back half off the plane… and no provision to close things up.  As Chris Becker observed recently, the new Tamiya 1/48 Spitfire Mk.I has no provision to pose it with the wheels up.  Others come to mind as well though, where you need to do a lot of work to close a panel or have the wings extended, etc.  It’s where the excellent engineering of the choices in Tamiya’s 1/32 Corsair was so impressive.

In a hobby where the appeal is the broadness, the fact that there is no wrong way to model, this idea that a manufacturer can dictate how their kit can be displayed is sad.  Whatever, the resistance starts here, and it starts with making the two halves of this fuselage fit.

I mentioned earlier that many MiG-15 and MiG-17 photos appear to show aircraft in a metal lacquer paint instead of actual bare metal.  This is certainly done on some today, probably as an anti-corrosion measure, but looking at photos of derelicts, some may also be showing where a metal paint is wearing off.  But I also have photos of both modern and period MiGs which appear to be actual bare metal, as they show more distinct variation between panels than I would expect from paint.

It’s no surprise that a kit of this age might be worth dressing up with some aftermarket goodies.  Here are the bits I’ve gone for: 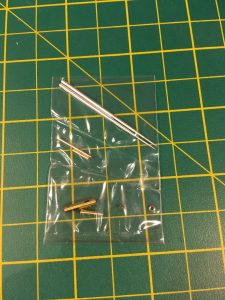 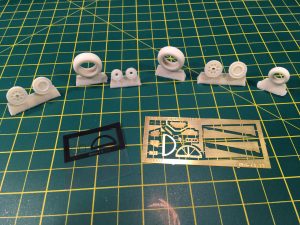 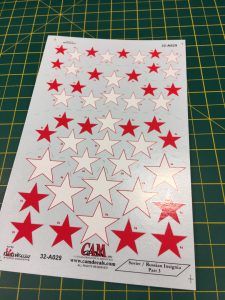 I think this kit is going to be a slightly challenging build, but at least the overall simplicity should mean that there’s not too much to damage in handling it.  I do worry that I might be biting off more than I can chew, building two big bare metal jets when I’ve never got a bare metal finish I’m really happy with.  Regardless, if I can pull it off it will be worthwhile.

Next article (Not so) basic modelling skills

That gunsight looks large compared to the tires?

Yes indeed. I got a few Profimodeller PE extras for the cockpit, and getting all of them would probably have been a better idea. To be honest that just adds detail though, and a lot of the details remain overlarge.