A fun little build of an interesting late Cold War US spy submarine.

Accuracy: Looks good compared to what we can see of the original

The Sturgeon-class submarines were a 1960s development of the preceding Thresher SSNs, being slightly longer and giving more space for both torpedoes and more sensors.  The class was further modified during production with later hulls being lengthened: these were regularly involved in clandestine reconnaissance.  USS Parche (SSN-683) was further modified by splicing in a 30m hull extension in front of the sail, which is reportedly a section to house intelligence operatives and their equipment.  Interestingly, this section seems similar to that added to the third Seawolf-class submarine, USS Jimmy Carter (SSN-23) which is believed to have taken over Parche’s clandestine mission following her retirement.

We don’t know officially what Parche’s service involved, as most submarine operations tend to be kept fairly quiet and this one was doing extra-secret work.  However, it is conjectured in the open-source intelligence (OSINT) community that these missions involved wiretapping of undersea communications cables and recovering debris from interesting items that fall into the sea such as missile test fragments.  Parche also had some experimental navigation features, which may not have been specific to her intelligence operations but could well have involved testing new technologies that were built into the Seawolf and Virginia-class subs.

The Sturgeon-class as a whole focused on stealthiness over speed.  As they kept the same reactor and machinery as the shorter Threshers the Sturgeons were a couple of knots slower (officially having a top speed of 26 knots against the earlier subs’ 28 knots) due to their greater mass.  Parche’s further lengthening further increased mass against the same powertrain and (officially) caused a further 1 knot reduction in top speed.  This bears a little investigation as way back in my Kongo build I mentioned that the lengthening of that class’s hull contributed to greater top speed by increasing the fineness (length / breadth) ratio.  I think there are two reasons why this didn’t happen for the Sturgeons: first, unlike on Kongo the lengthening didn’t come with increased power, essentially saying that the fineness and power gains combined overcame the extra mass; second, Kongo was a pre-WWI design (being an improved Lion-class) whereas Sturgeon was designed almost 50 years later, thus there were probably fewer marginal gains to be made due to better initial hydrodynamics.

Having never built a submarine model before I was unsure what to expect.  It turns out that submarines are broken down into two hull halves, with a few extra parts to build the sail, planes, propeller, and in Parche’s case, the extra structures top and bottom.

This is very clearly a garage kit: short-run and lacking the refinements we would expect in a more typical modern tooling.  There are no locating pins or holes (though some parts are given scribed outlines to aid placement), all the part edges are square even where they need to mate to a curved surface, and the detail is a bit softer that you might expect.

However none of this bothered me as much as it would usually, possibly because the company doesn’t make any claims to be industry-leading.  It certainly doesn’t hurt that the submarine is a fundamentally easy shape to fill and sand.

I painted Parche with MRP Swedish Black over a marble coat of NATO Black, AMT-6 Black, and RAF Night.  This gave a subtle shift to the black tone, which was enhanced by applying black, brown, and grey oils in longitudinal lines and streaking them vertically to mimic an effect seen on US subs.  The red was a mix of Mr Colour Hull Red and MRP Signal Red which looks quite nice against drydock photos.  Colour profiles show Parche wearing all-over black in this configuration, but I had the red below the waterline confirmed by a former crewmember from the mid-1990s.

I had been concerned that a 1/350 submarine would be like weathering a ballpoint pen: it is very small (similar to a small modern frigate) but the hull width gives enough surface area to do some interesting things with.  Overall though I would love to see sub kits in a slightly larger scale: I think 1/200 would be ideal for post-WW2 subs as that would put the smallest Alfas and Skipjacks at about 50cm, with the largest SSBNs coming out around 80-90cm.  These sizes are comparable to WW1-2 battleships in 1/350 which are widely considered a good size for display.

I actually enjoyed this build so much that I’m tempted to design a few 1/200 sub kits and try to produce them commercially as a long-term project.  I had been put off for a long time thinking they would just be boring black but actually there is a wealth of interesting weathering opportunity here. 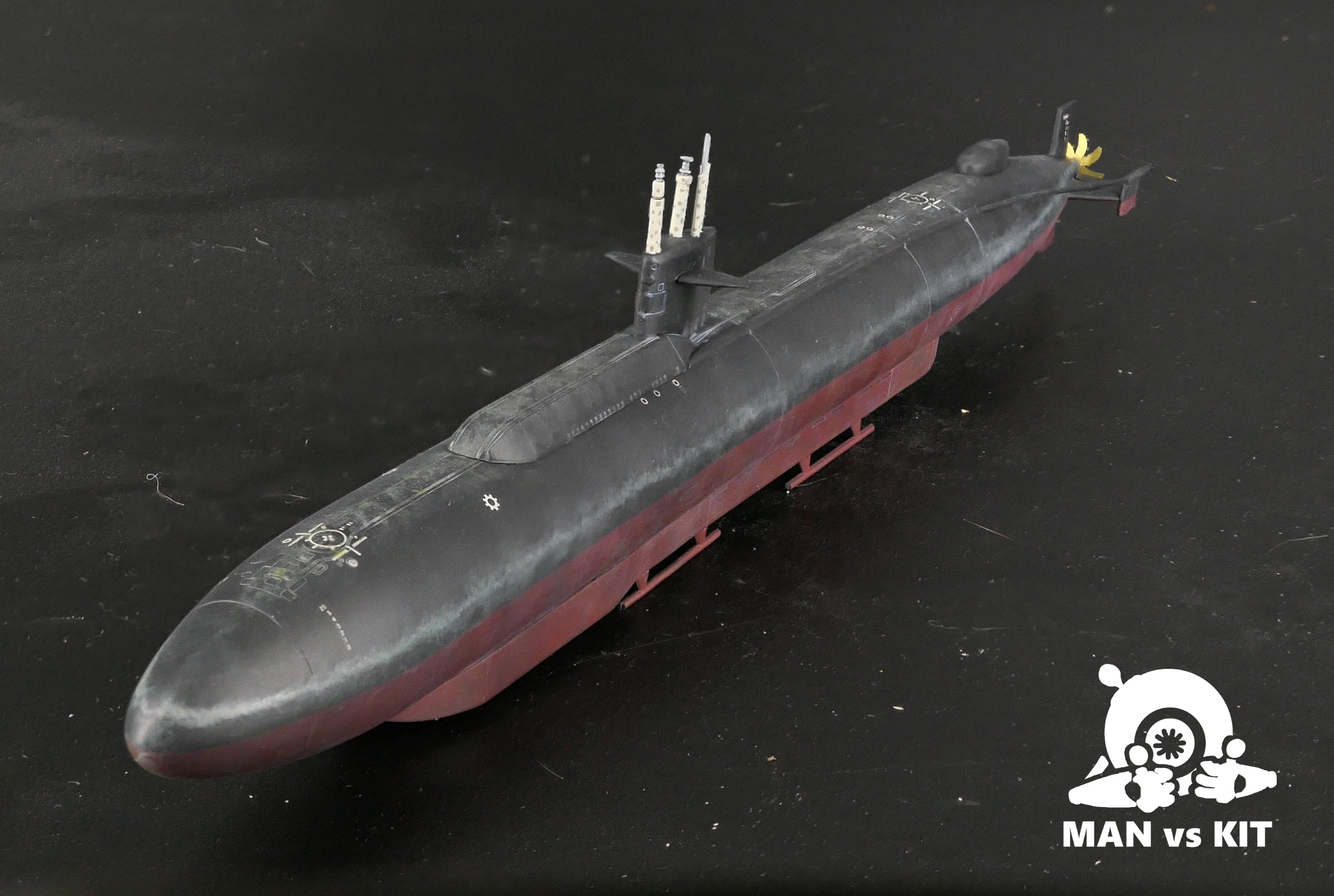 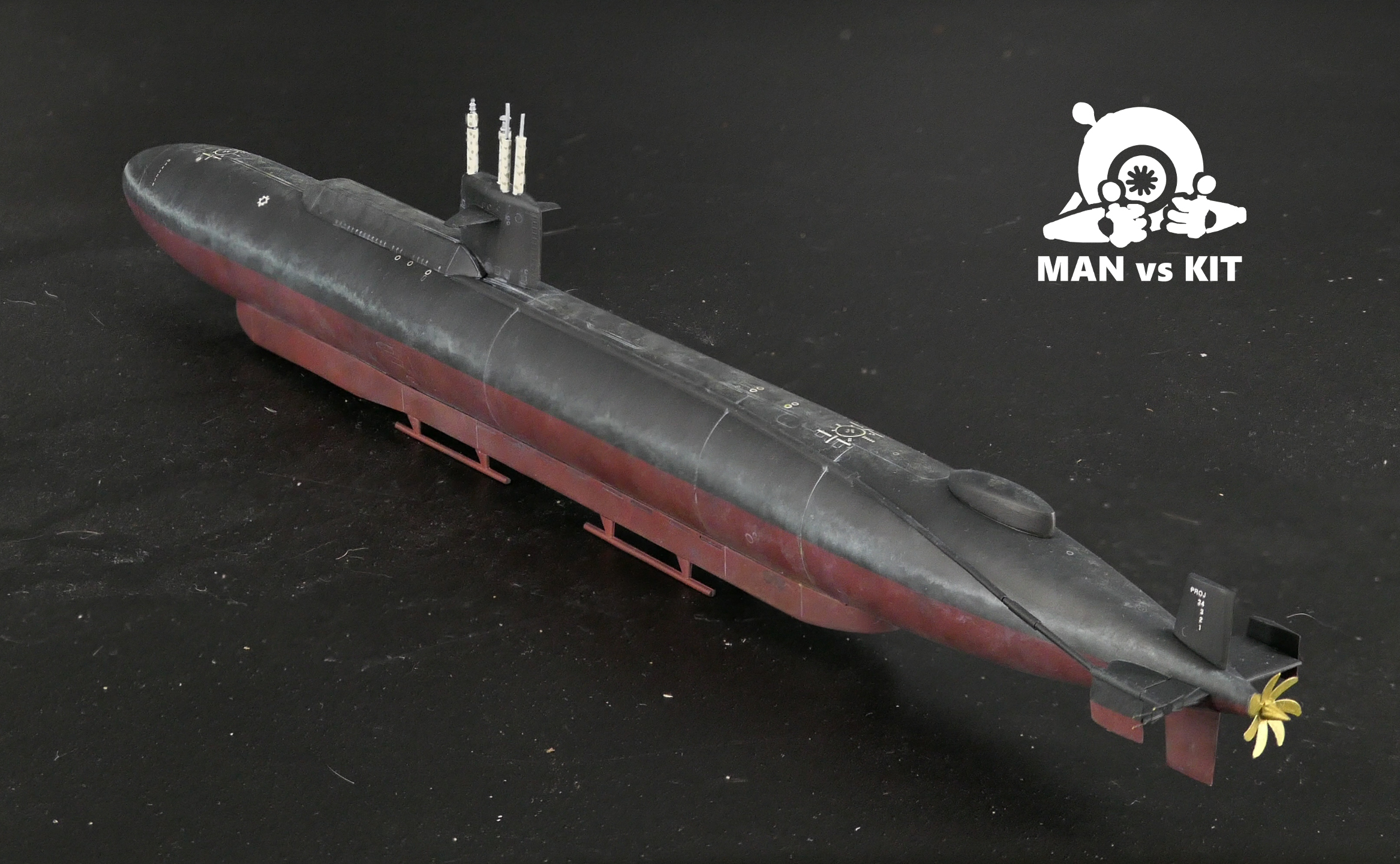 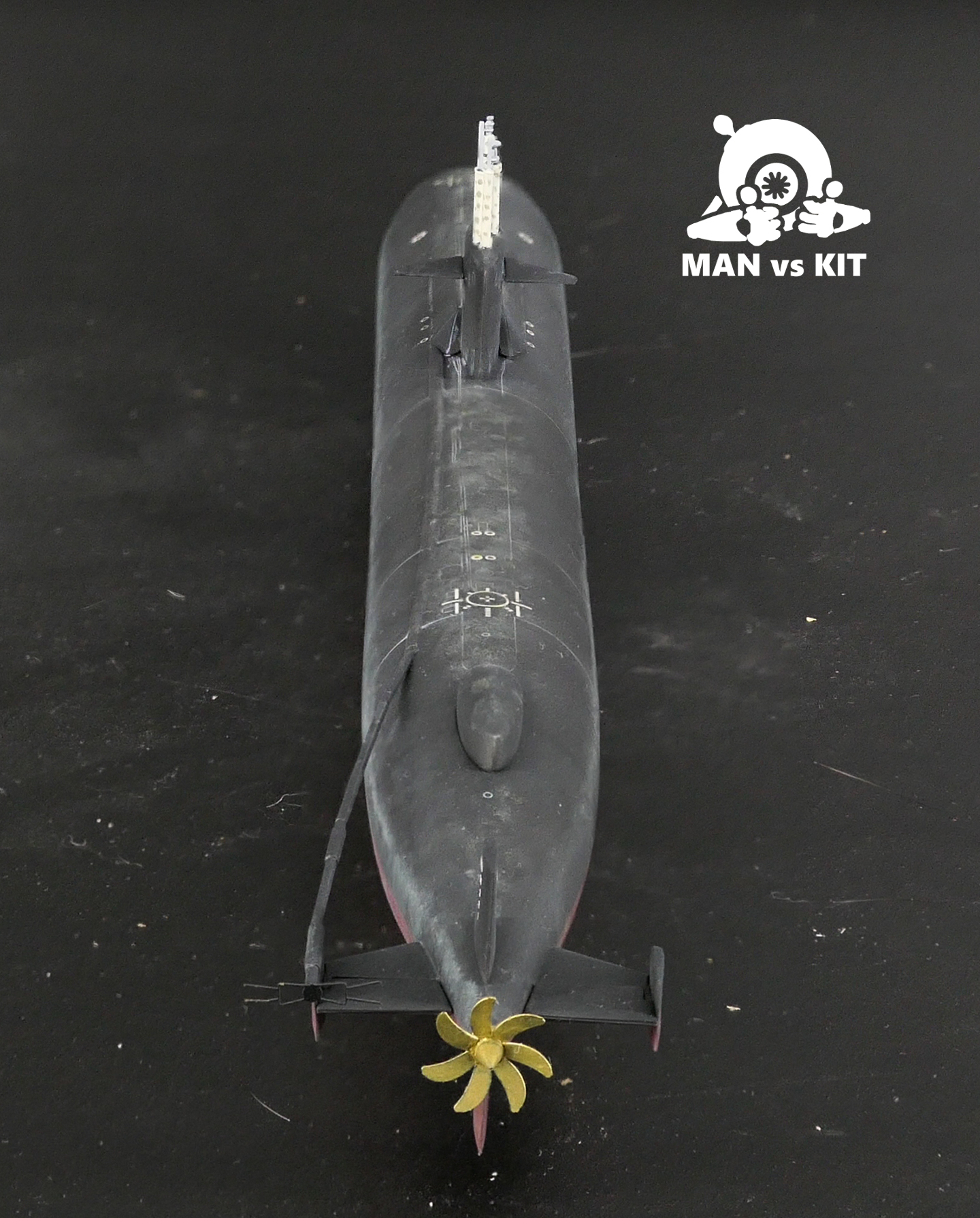 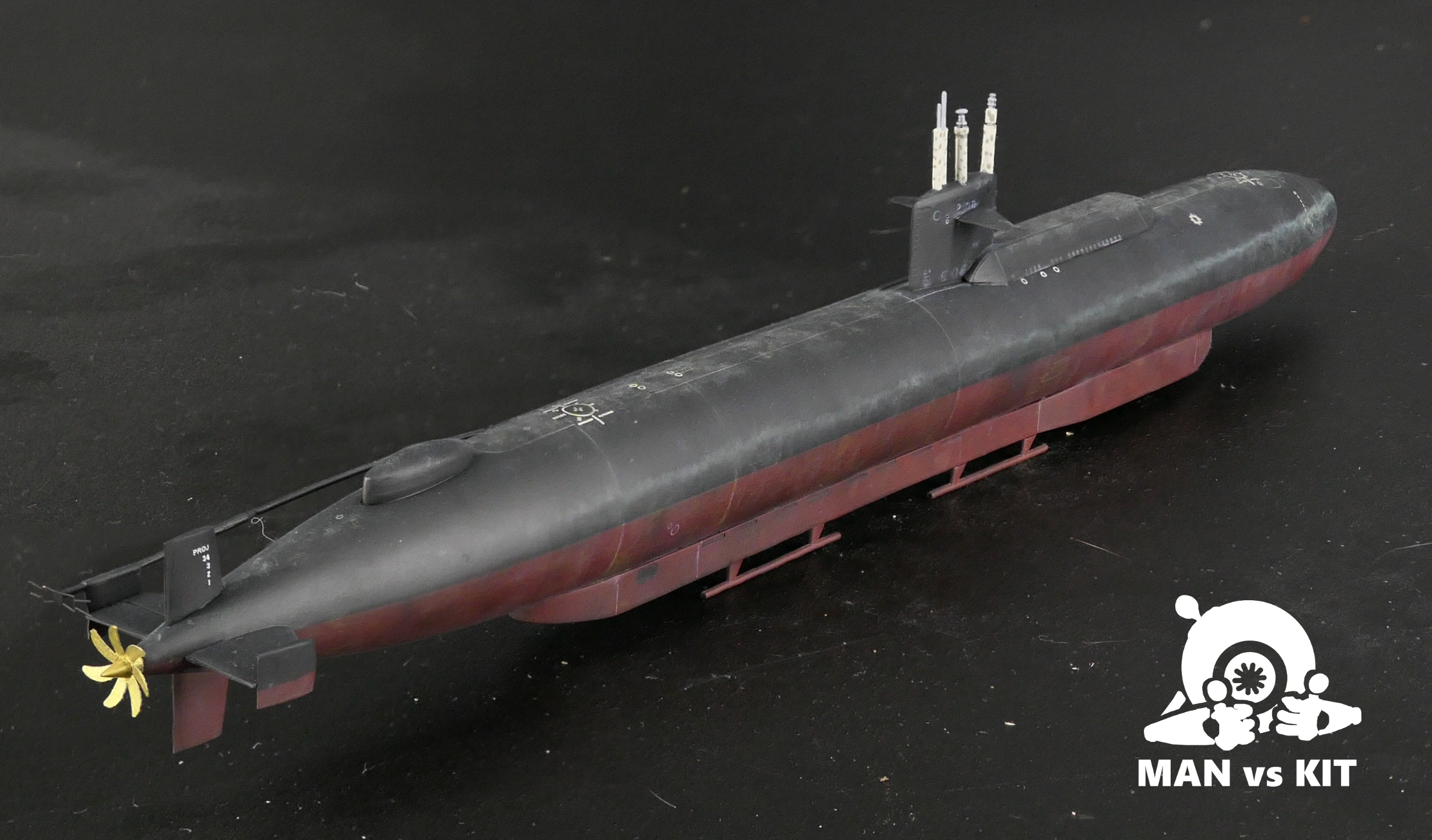 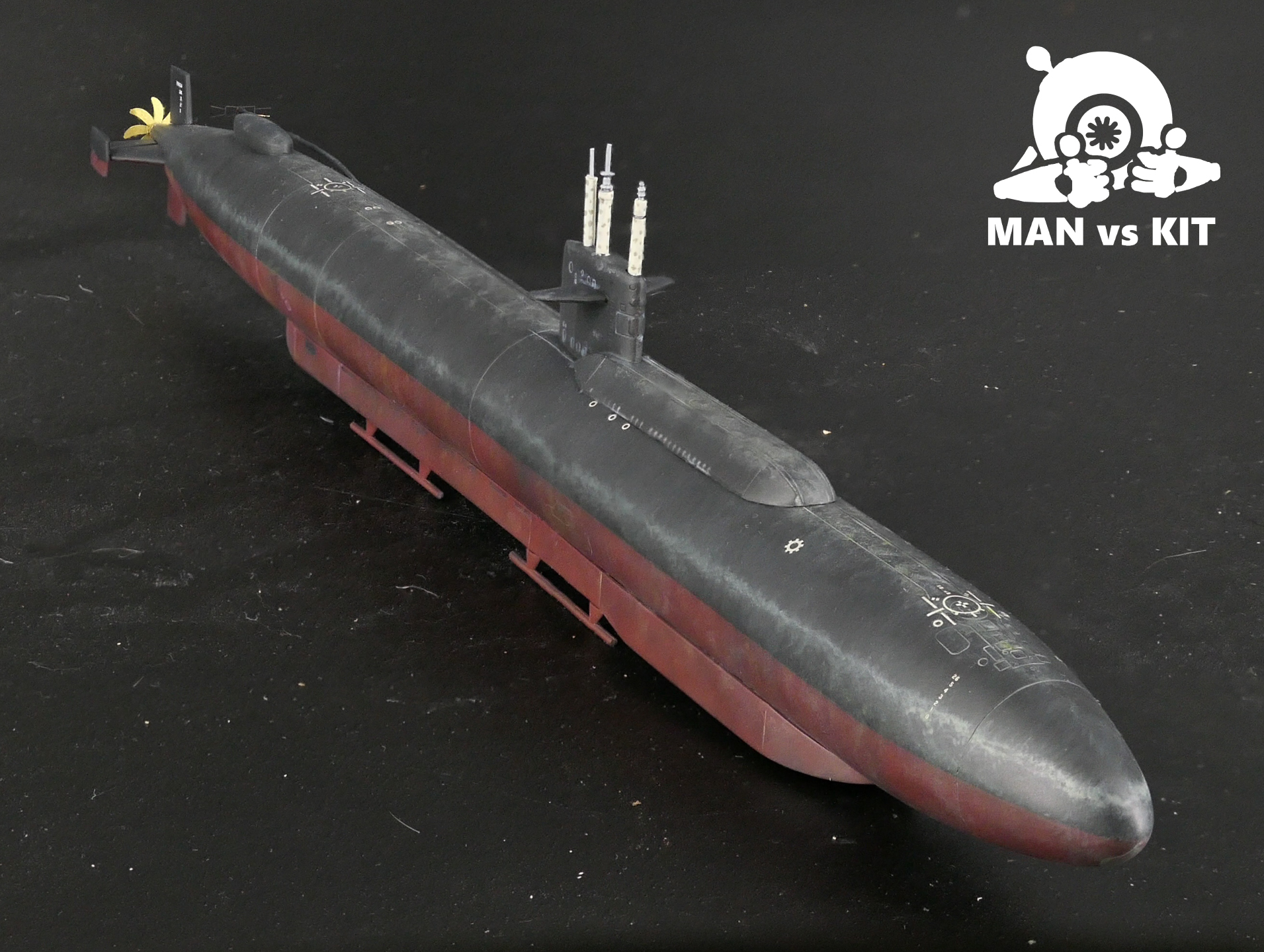 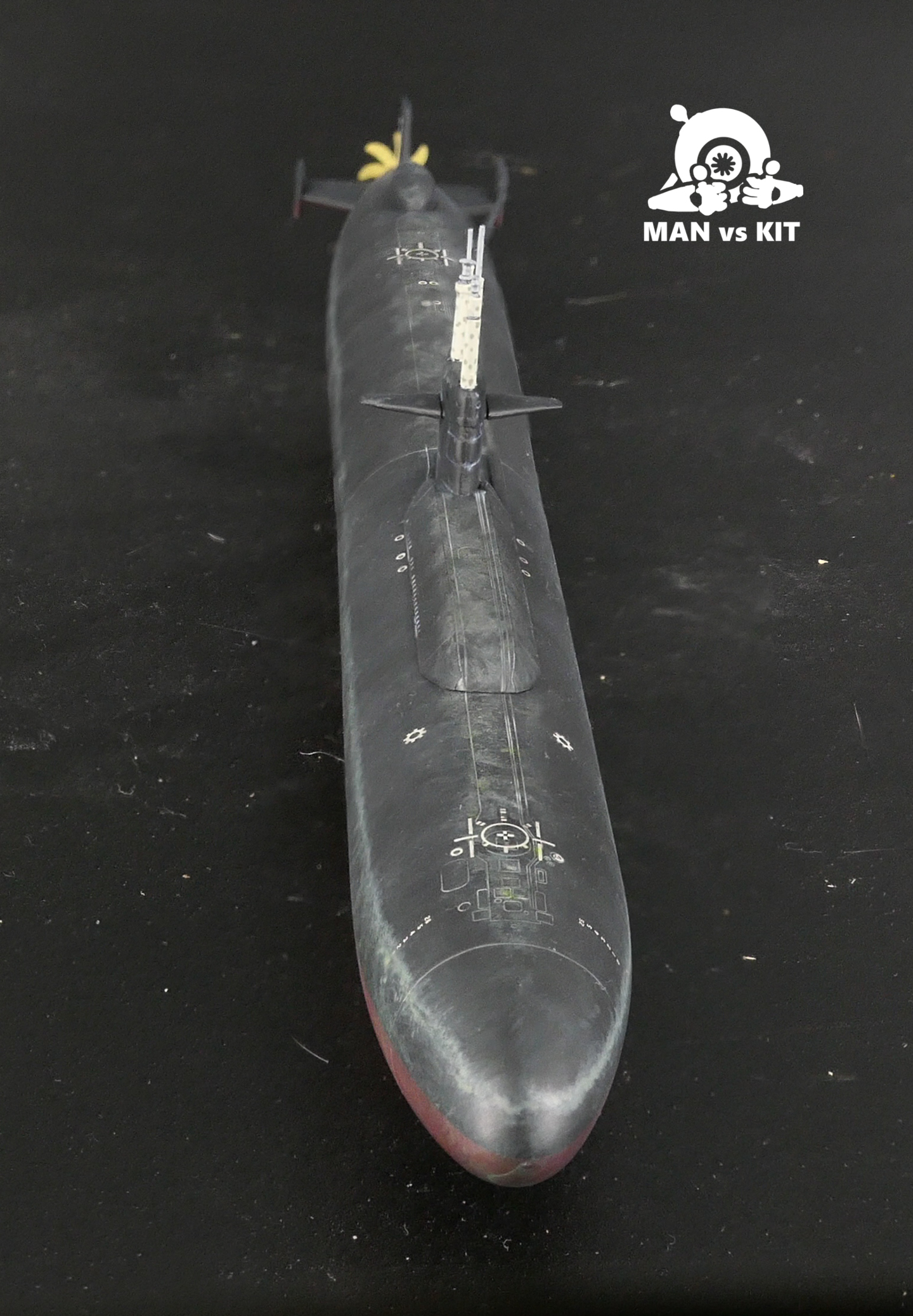 Glad you like it! Always great to hear from people with a personal link to the subject.