“Basic modelling skills”, also shortened to “BMS” is a phrase that has entered the modelling lexicon.  Here I will argue that it has a negative effect on the hobby and its community, show why it is flawed, and suggest how we might improve.

I would like to start by stating that although the phrase is harmful and has negative effects, I do not believe that most people using it intend it in this way.  Rather, it is mostly used reflexively by people who have seen it being used and want to demonstrate their belonging in the group by adopting the vocabulary.

My contention begins with the idea that the phrase, “basic modelling skills” is unhelpful because in common usage it does not refer to skills that are in any way basic.  If the words, “basic skills” are to have any meaning, then they must refer to the skills which are basic.  That is to say, the ones we all learn first when we try building a kit.

Removing parts from sprues without damaging them, following the instructions, painting (either with a brush or hosing on with an airbrush) and applying decals are all “basic skills”.  On a conceptual level, what we are doing here is assembling the kit as provided, and that is “basic scale modelling”: the level that most people will work at when they first see a kit.

I can tell that a few of you are desperate to say something about filling seams and gaps, but don’t worry, we’ll come back to you.

Next we have intermediate skills.  I suspect that’s most of “us”, insofar as “us” means “people who read scale modelling blogs”.  It’s certainly me.  Here I would include using airbrushes to achieve paint modulation along with brush techniques such as oil paint rendering, any and all weathering, fixing seams, riveting and scribing, rigging, and integrating multiple media whether provided or aftermarket.  On the conceptual level, “intermediate scale modelling” means improving the kit: going beyond what’s provided in the box, whether through additional parts or just really tidying up what’s there.

Finally, we have advanced skills.  I’m not at this level, so I’m just going to say that it is scratchbuilding and let people who do that talk about what skills are needed.  Conceptually, this is where the kit is no longer necessary, and you are creating rather than assembling and improving.

Being an MBA, with a distinction I might add, I made this nice little conceptual framework to illustrate the above, which you are welcome to use. 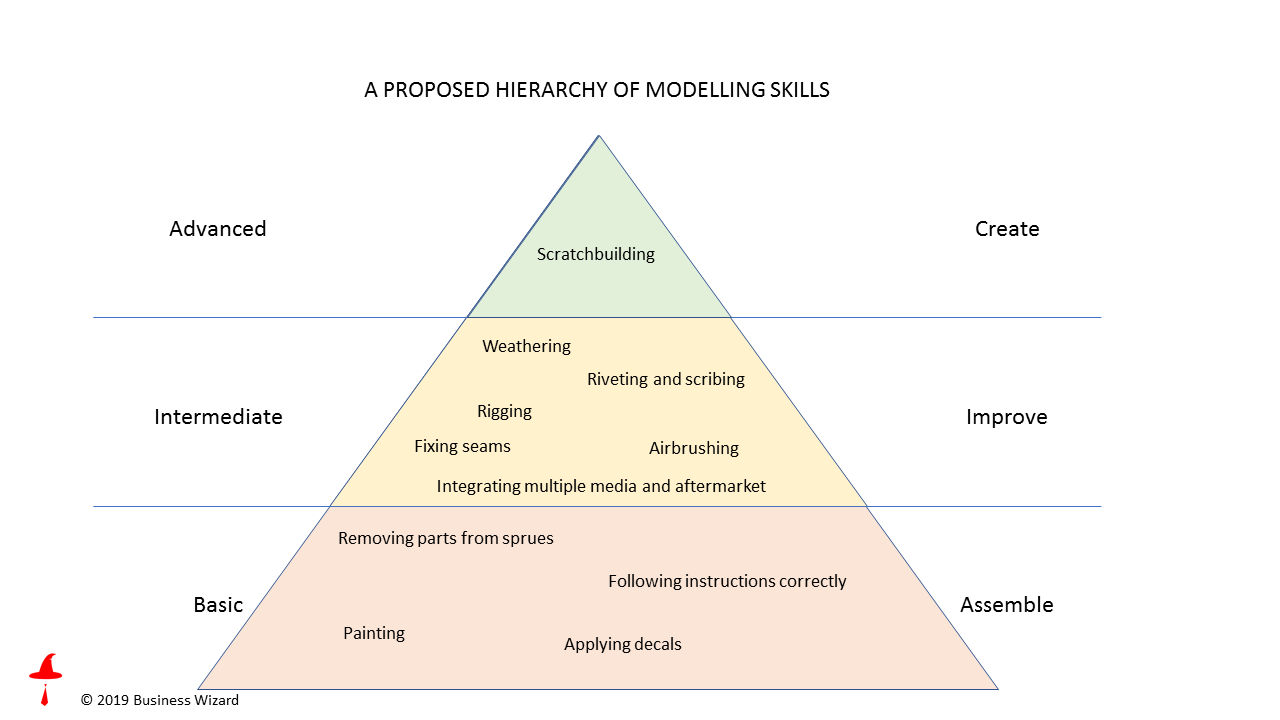 I can see two objections here, and they both stem from ego.  Ok, three, but the last one is about my ego and doesn’t count.

The first is that the basic level is too small and should include things from the intermediate level, especially the unfun ones: I simply disagree with this assertion.  I think that most people would not consider filling and sanding to be part of sticking a plastic kit together, and that telling them they have to do this drudgery puts many off.

The second is that I have said that weathering, riveting, rigging, and so on are “merely” intermediate, and that if they are done really well, should be considered advanced.  This conflates two things in order to boost the ego of people who want to say that they are “advanced” and who are actually feeling a challenge to their self-worth from a pyramid that some fool on the Internet drew.  Of course there are different degrees of skill.  But here I am saying that in terms of what you are trying to do with your model, that there is no real difference between the guy who carefully fills every existing line, and carefully carves perfect replacements, and the guy who makes some scratches with a penknife.  Because both are simply improving a kit.

The problem is that what I outlined above is not what people mean when they say “basic modelling skills”.  No, the term is used to refer to manually fixing kits’ stupid problems.  Fit issues, terrible surface detail or quality, that sort of thing.  Basically filling with either putty or card and then sanding.

Which… well, in what world is that in any way basic?!

The root of the problem

So far I’ve shown that the way we talk about skills is ineffective, but other than showing my pedant side, we haven’t looked at why this is harmful.

This misconception of what “basic skills” are leads to people in the hobby adopting a gatekeeper mentality and actively reducing its appeal to new and prospective members.  That is bad for the hobby, and bad for all of us.

What do I mean by a gatekeeper mentality?  This is a term widely used in hobby, fan, and internet communities to mean someone who tried to police who is welcome, typically on narrow or spurious grounds.  Handbook of Heroes has a great illustration.

In the modelling community, it’s sadly not rare to see conversations like the following:

Q: I would like to introduce my kids to modelling, what sort of kits should I look for?

A: Really old rubbish ones that fit badly.  It’s important that they learn the basic skills of gap filling and fixing seams before trying expensive modern kits

You just know that the kids are going to struggle with some awful lumps of plastic, and even if they aren’t told that they are worthless if they don’t fix the seams (I can only imagine that is the experience of these people’s own kids though), it’s still an awful, unfun experience.

At a time when a Tamiya 1/48 prop kit is relatively inexpensive, goes together well and doesn’t have many parts.  Perfect introduction for a new modeller so they can learn how to remove the parts from sprues, follow the instructions, paint and decal it and get a nice looking model without much fuss.

The problem is that there are certain people who are very snobbish about what a “true modeller” is, and want to keep any “not true modellers” out of the hobby.  It would be intellectually lazy for me to say that these traits align with a particular demographic (they don’t, at least not perfectly), so I will just say that it is an incredible coincidence that “the hobby” (in terms of IPMS clubs, shows, Facebook groups, etc) are dominated by grumpy, entitled, old men, often with a military background, who make children and especially women feel very unwelcome, and who often seem to have a real dislike of their own spouses and families.

Oh, and who moan about the hobby dying.

Whoa. Spot on. And I really loved that last paragraph. That’s going to cut some dudes really deep.

Very well thought out and unfortunately also very true , the major public competition/ exhibition in my area has a beginners table for kids to make a model there ( really good idea) but then the competition side of it and some of the more specialised vendors treat the newbies/ kids as Vermin thus getting them interested to then only shoot them down in a ball of flames when they return the following year with there best effort or attempt to learn from the more experienced modeller/ vendor(resin accessories, specialist tools type stand)

Basic modeling skills… I have found it helpful to have mechanical skills. The basic knowledge of how things are assembled on a 1:1 subject.

Handbook Of Heroes here. Your tag somehow generated a comment on the back end of the site. How’d ya do that?

Also, thanks for the shout-out.

Also also, way to try and expand your community! Well done that man!