Tamiya’s big Corsair has a well-deserved reputation for being one of the best, if not the best, plastic model kits ever created.  There’s little point in me doing a review of the sprues or construction, so I’m just going to walk you through my approach to painting it. 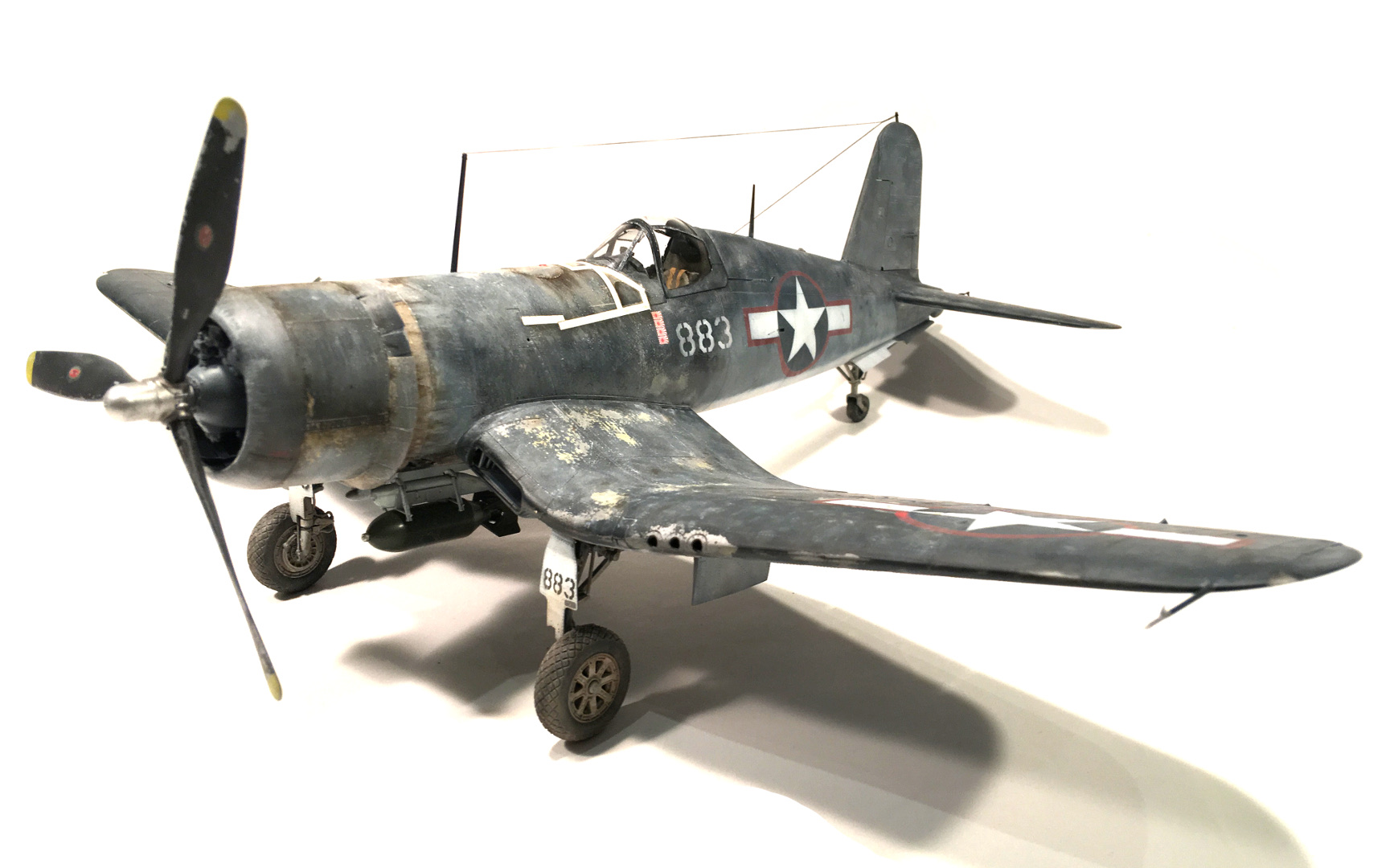 You get a big box full of parts.  Every piece is nice, well-shaped, finely detailed and designed to be easy to separate.  You only follow about two thirds of the instructions as there are very involved changes depending on whether you pose the wings folded or extended.  These use an entirely different set of parts. 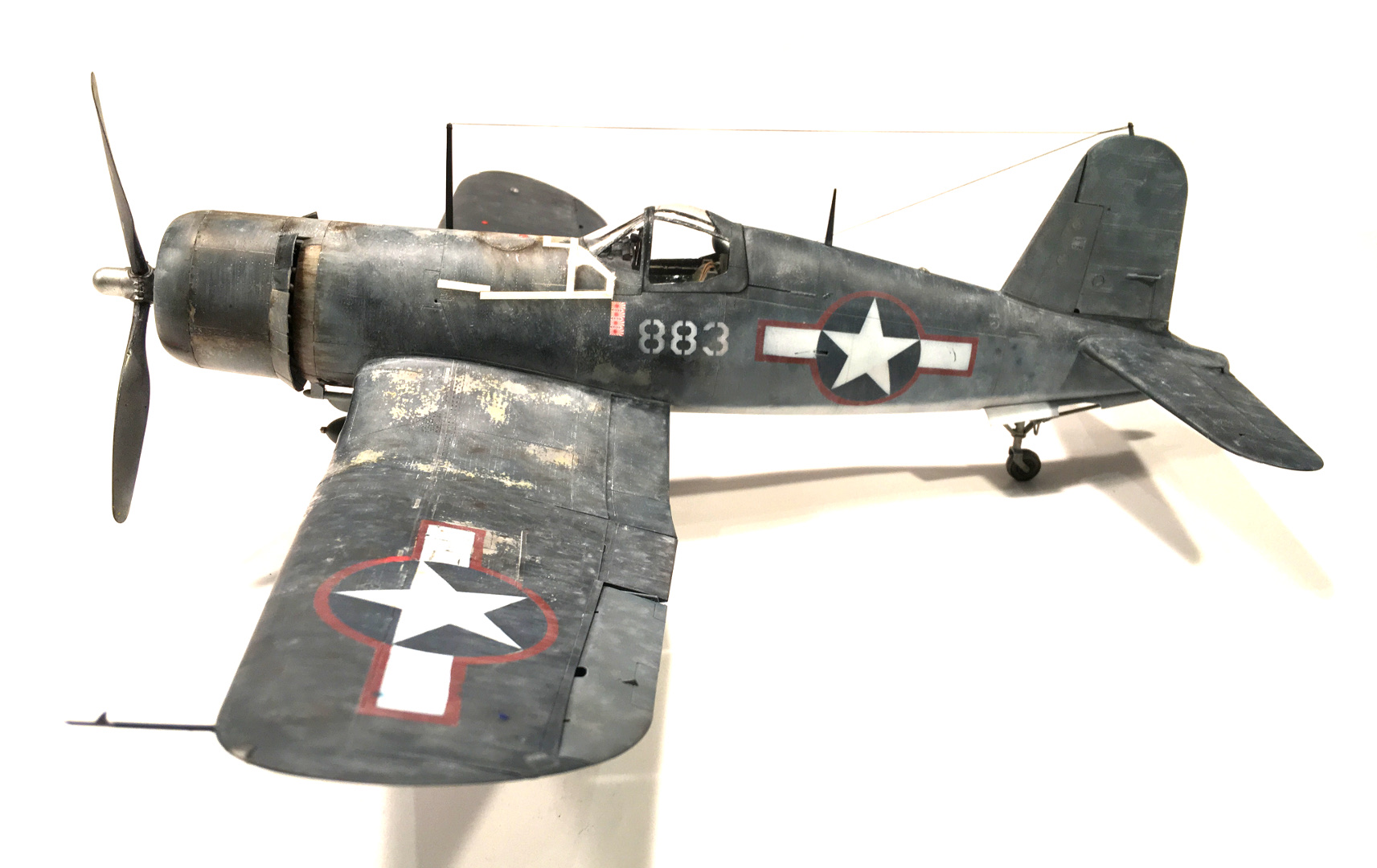 It doesn’t just go together well, it feels like Tamiya designed this so you couldn’t go wrong.  Even complex fittings like the exhausts all slot together neatly.  The only problem I had was that the wing outboards are such a snug fit that they got a little stuck.  I built it entirely out of the box, and if I were to build another (which I will, either the earlier or later model, or maybe both), the only thing I would change is a set of tyres to replace the rubber ones.  I did what I could with them but to no avail. 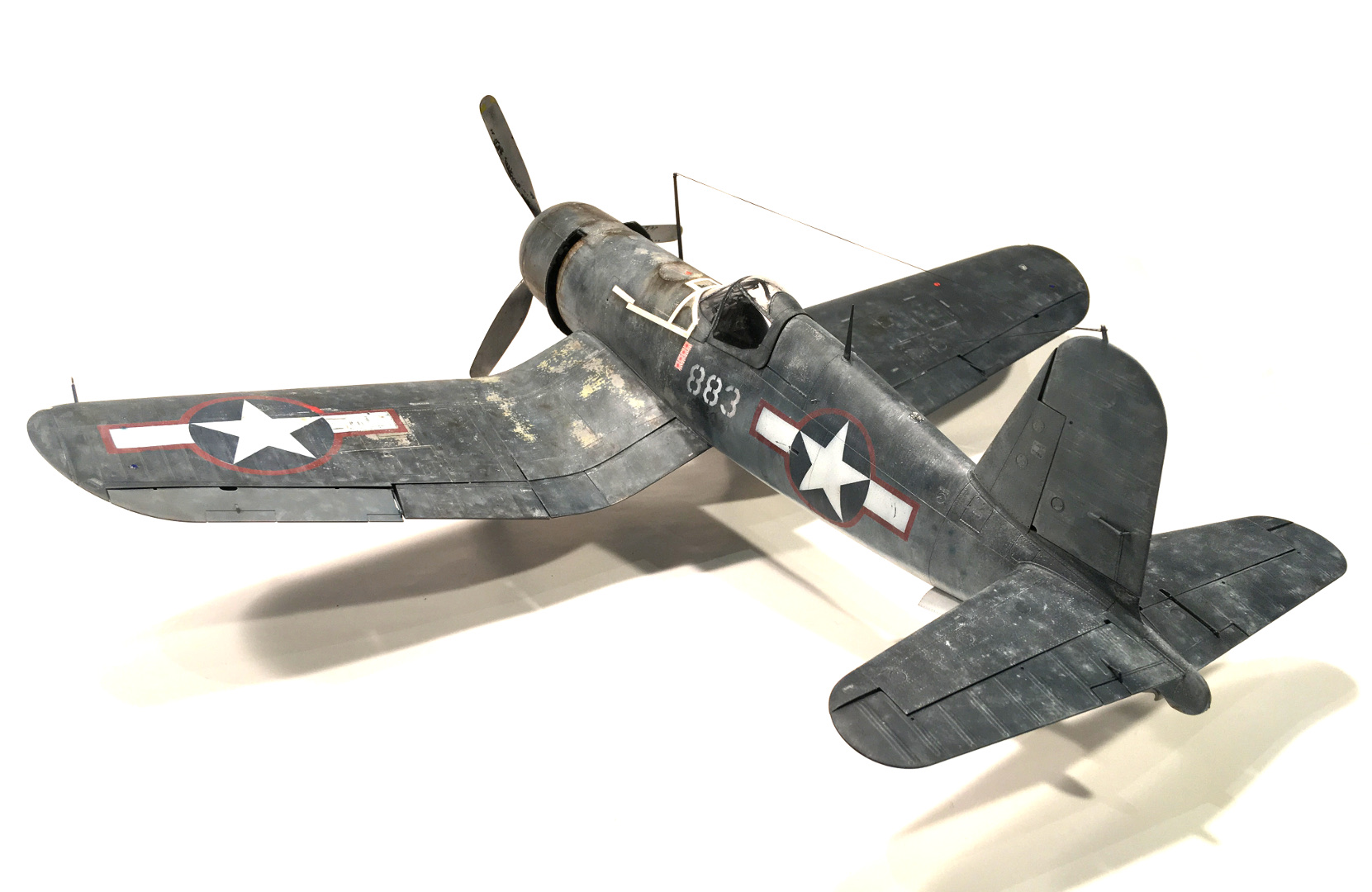 I wanted to recreate an island-hopping Corsair.  Operating from coral islands with little infrastructure, the abrasive coral dust would create extreme wear and coat the aircraft.  I also wanted to show the evolution of these aircraft from summer 1943 to summer 1944, as they moved from the introduction of the tri-colour scheme towards the all-over Gloss Sea Blue.  During this time the star-and-bar insignia was introduced, first with a red outline, later a blue one.  Also, being ridden hard in combat for this period, I wanted to show replacement of parts both large and small. 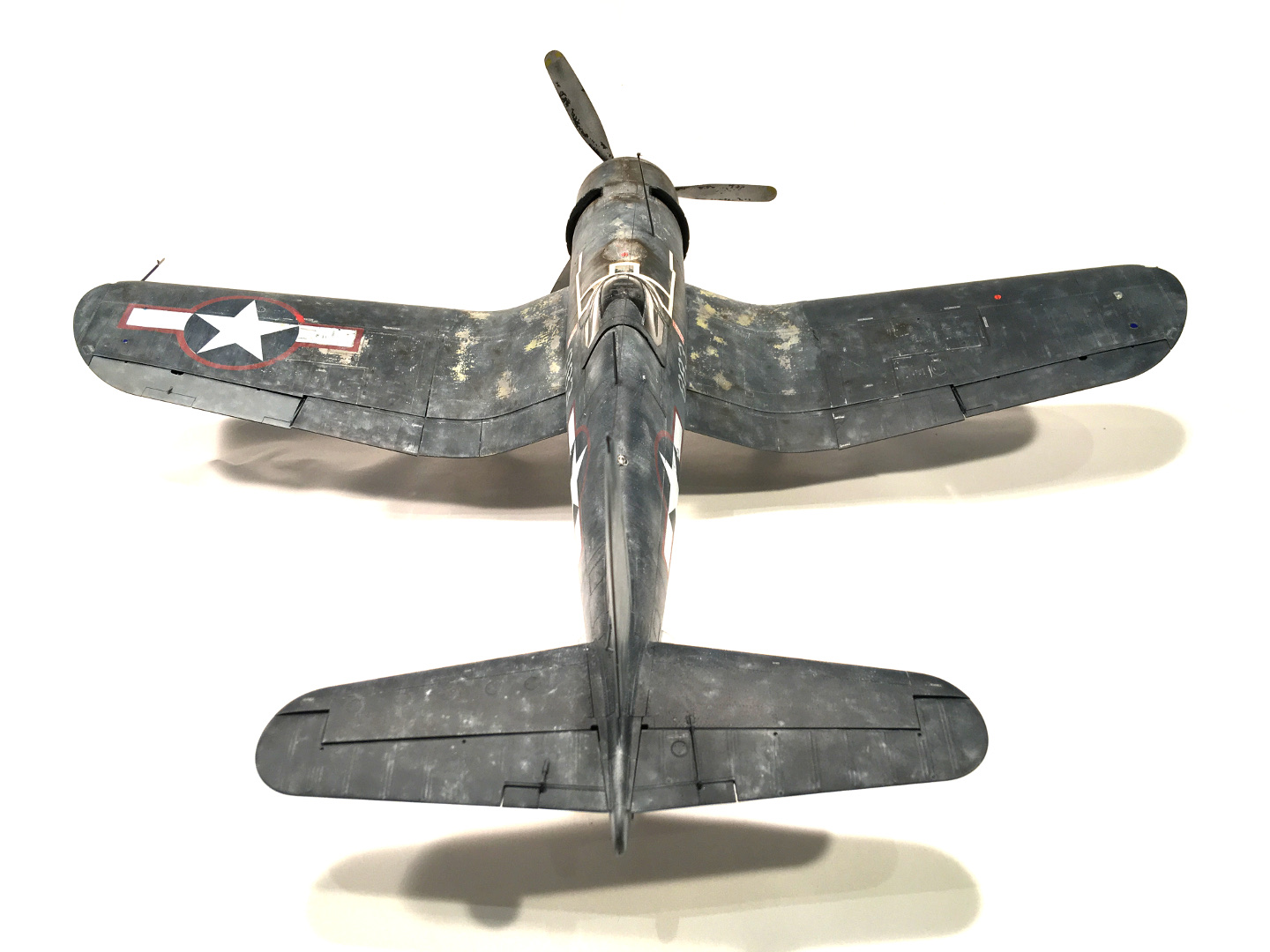 I chose to paint it in the tri-colour scheme, with heavy wear in places that would see a lot of foot traffic.  Typical of these aircraft is wear down to the yellow chromate primer and to bare metal, with both visible.  The back of the propeller blades would be sandblasted almost completely clean of paint.  Maintenance crews would also be walking some mud over the wings, which will stain. 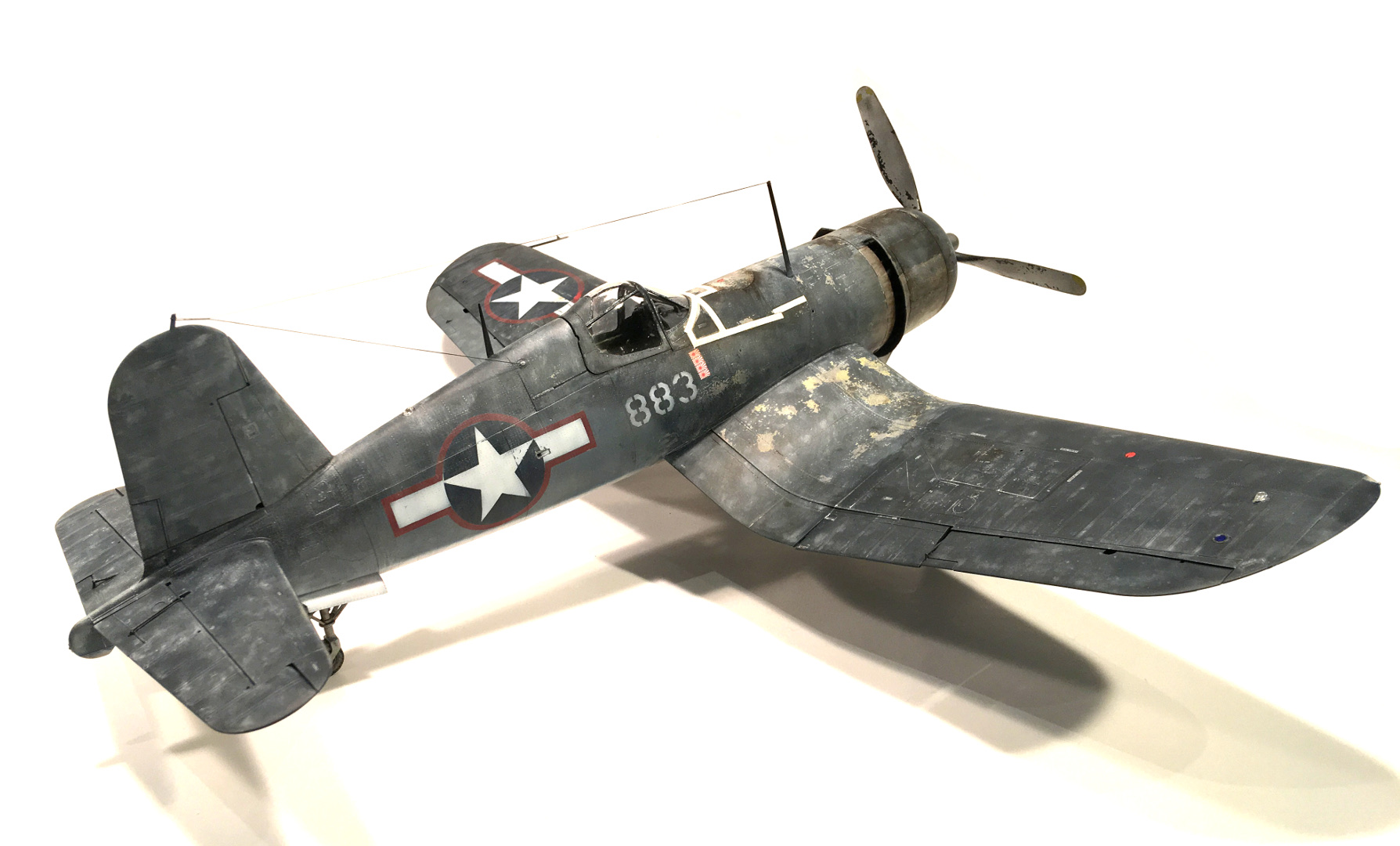 The upper wing and fuselage insignia would retain the red surround which marks this as an early aircraft (used from late June to September ’43), but the right outboard wing would appear to have been replaced at some point. The replacement wing is less worn and cleaner, and features the later blue surround on the insignia.  Also replaced is the left aileron, possibly very early in its career with an old spare part, as this is Intermediate Blue all over, either that or no one bothered painting it up. 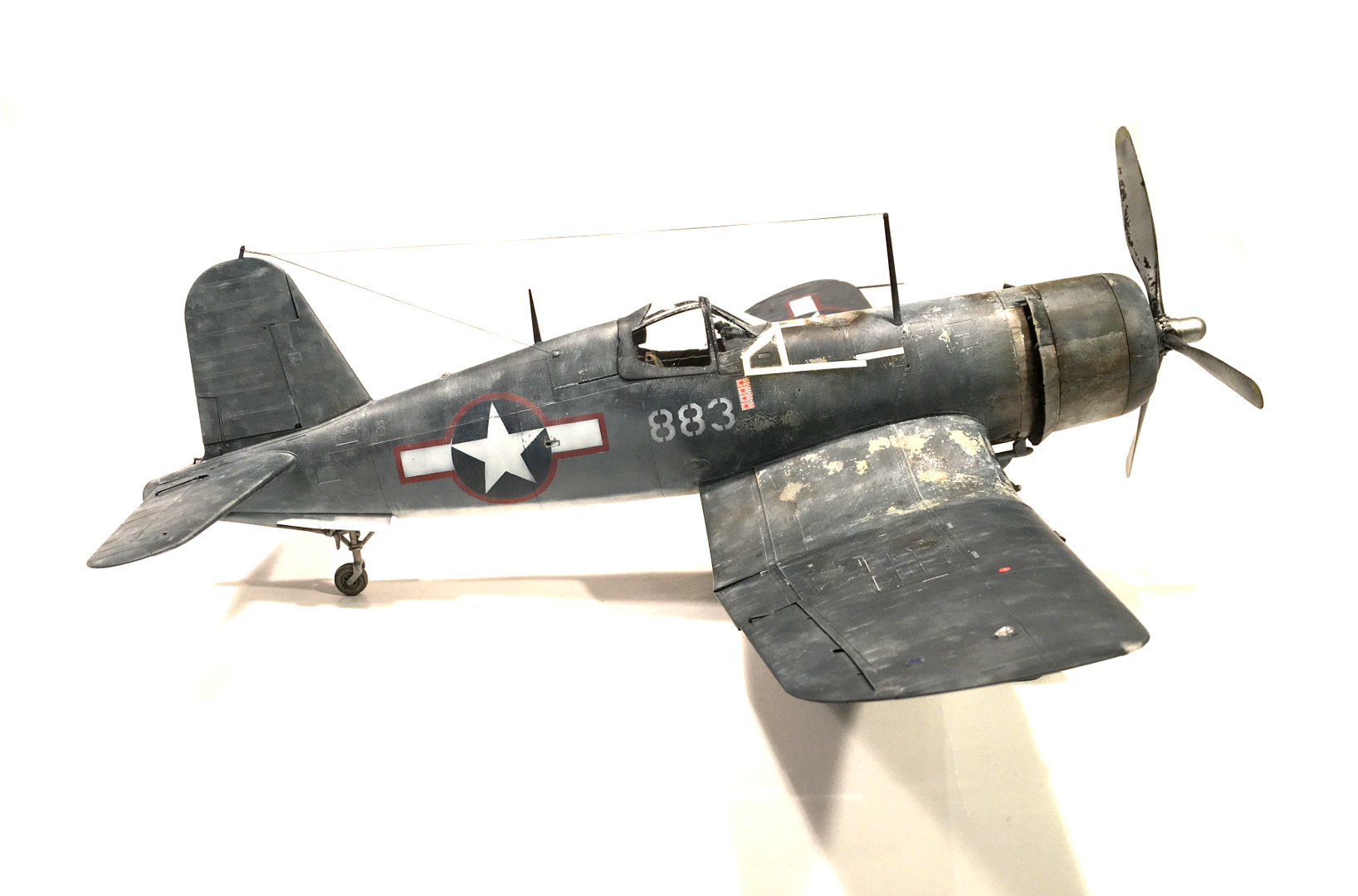 The canopy frame appears a slightly darker shade than the rest of the upper fuselage, suggesting a replacement after the original was damaged or jettisoned. 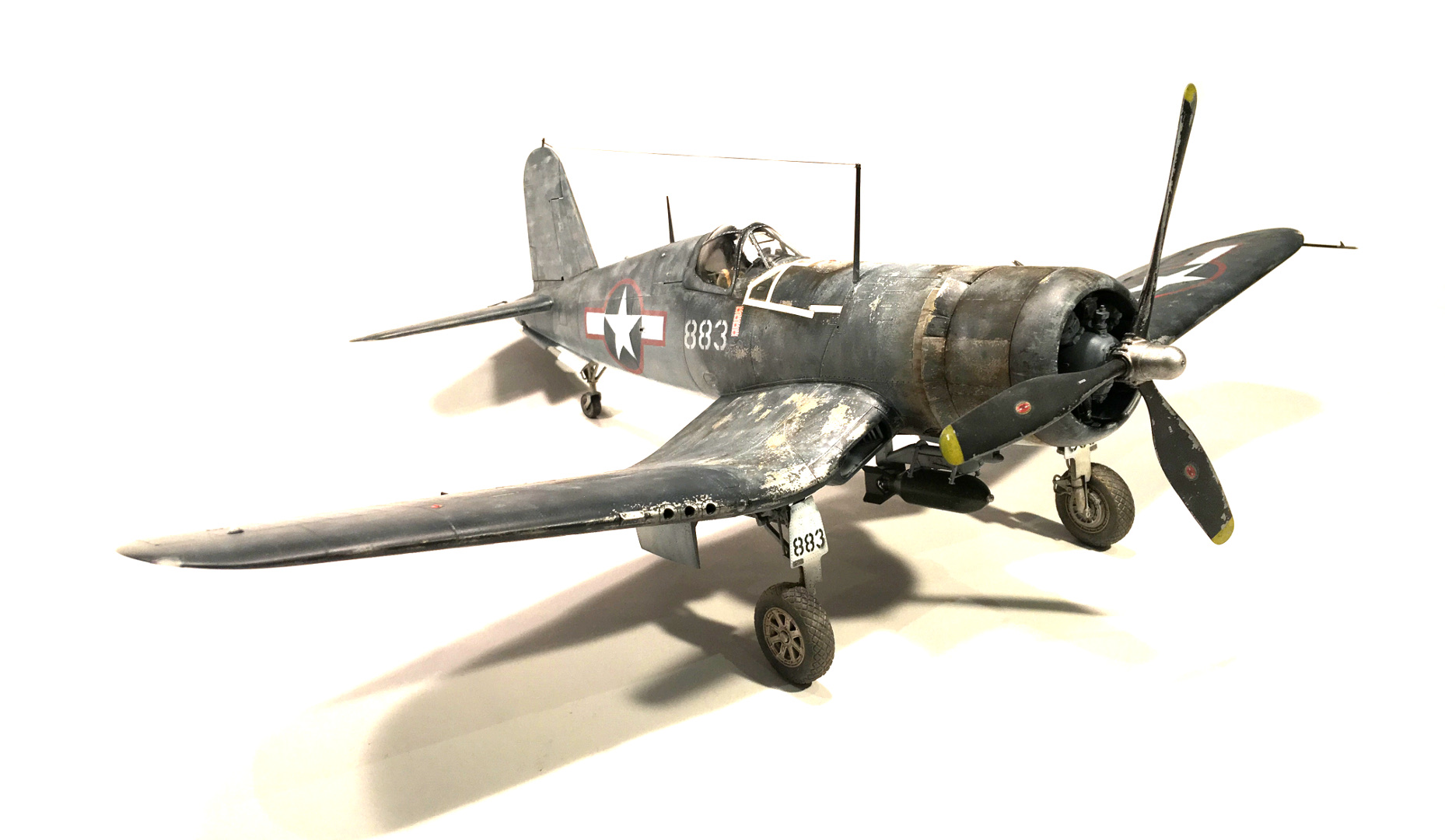 The cowlings are to be of particular interest as the cowling sides match neither each other nor the camouflage demarcation of the fuselage. These may have been swapped from two different aircraft or hastily painted prior to application. Further, the cowl front is painted all over Gloss Sea Blue, indicating a much more recent replacement and placing this aircraft presumably in the latter half of 1944. 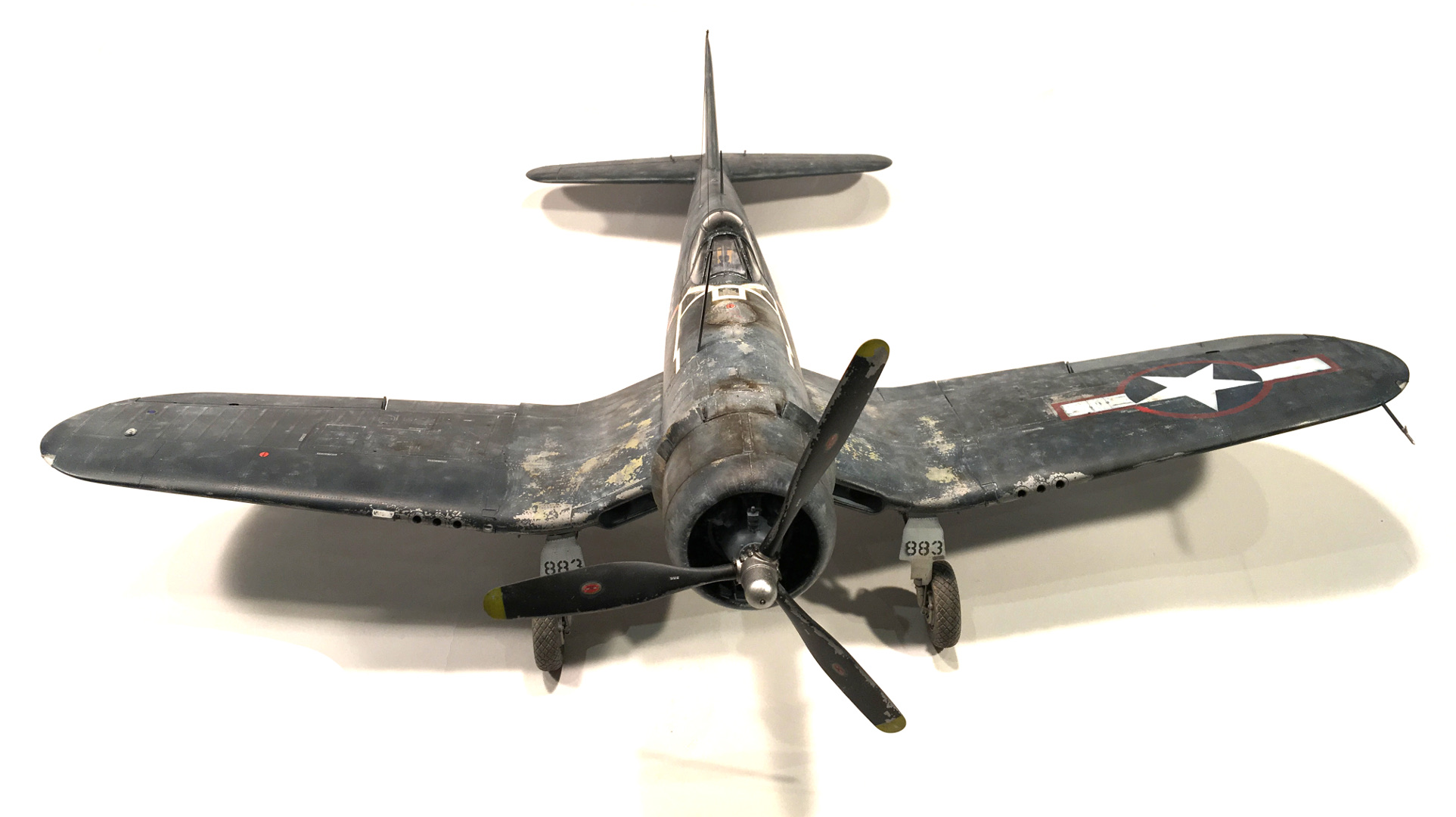 Marks of repaired bullet holes are found along the rear fuselage and on the left wing. These last appear to have traversed the aileron and may have prompted the replacement part. 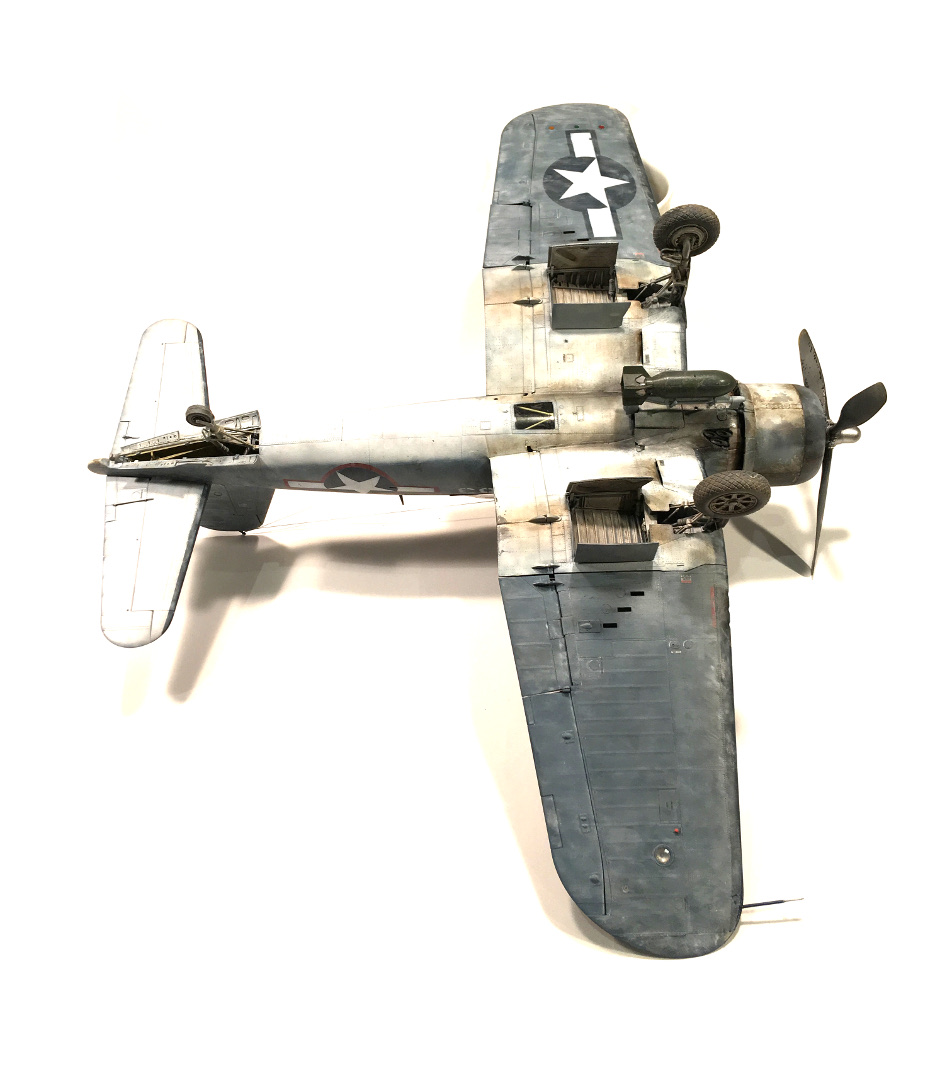 The question was how to achieve this.  Multiple techniques would be necessary, and I had spent the last six months or so learning new techniques for this build.  This would require: 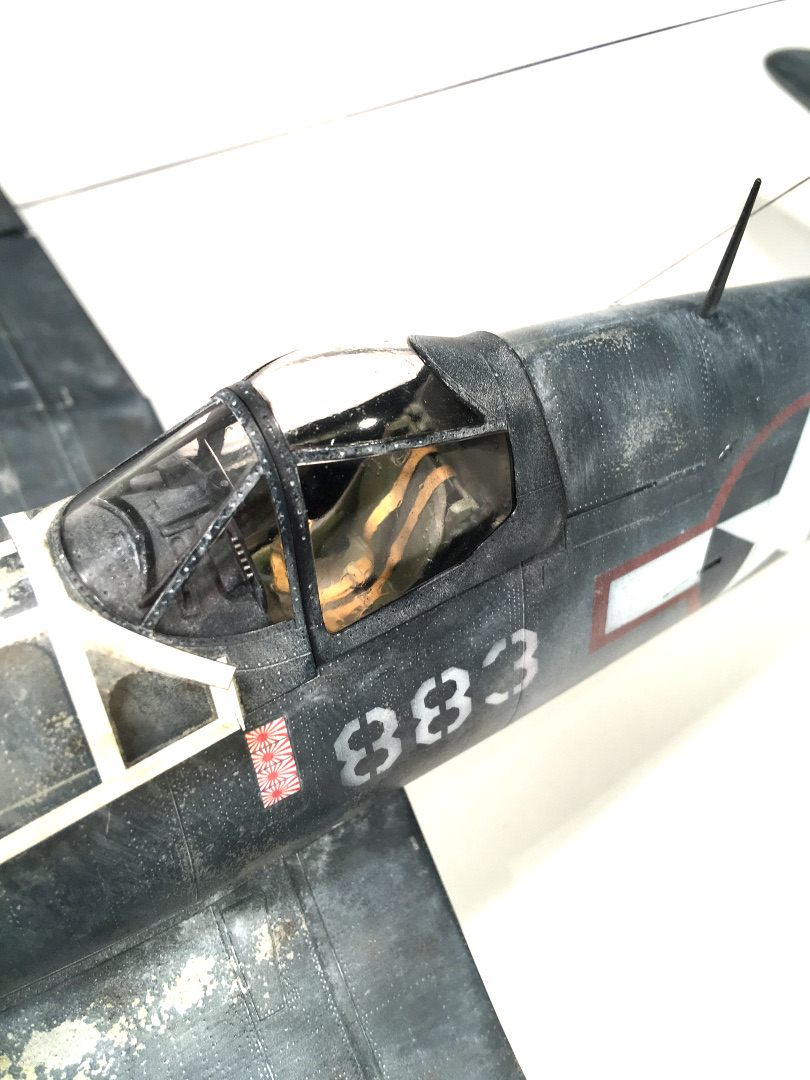 No, really.  Before painting I figured out how I wanted it to look, what effects would go where, and how I was going to approach each colour.  Did some test pieces to check I was happy with the result, and sometimes to choose between several methods. 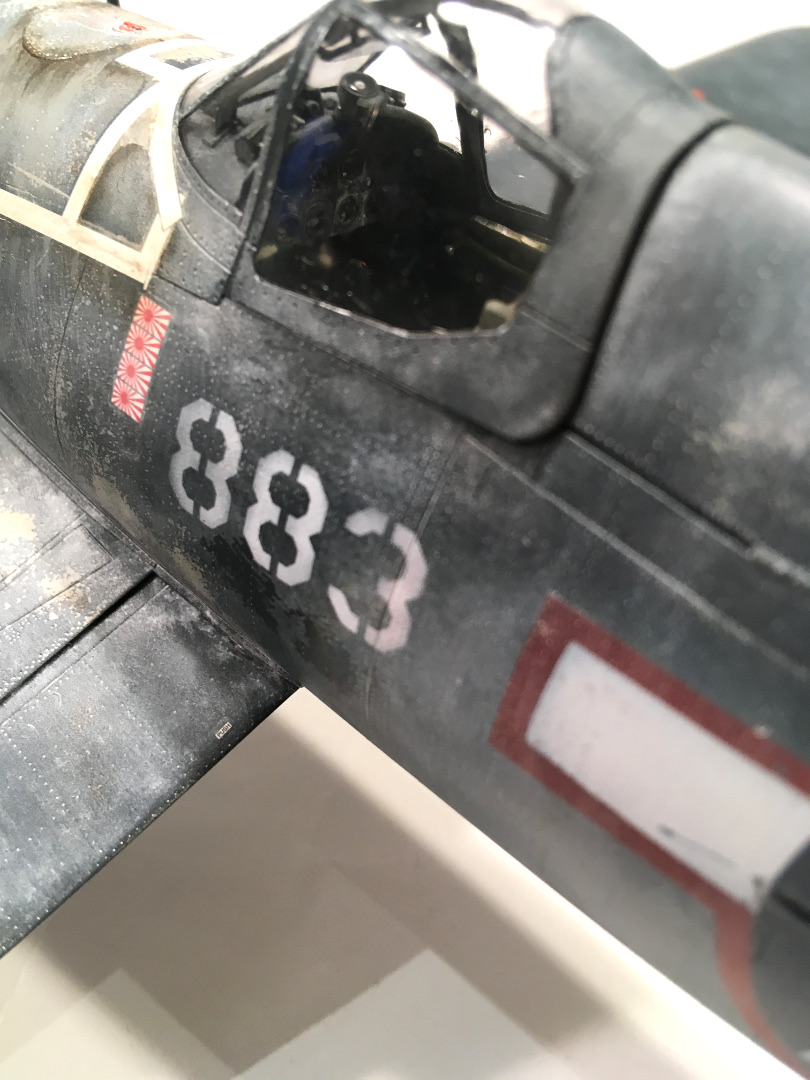 The first thing to lay down was a metallic surface where I wanted to chip away the top coat.  I used MRP’s silver primer with some Super Silver metallic over the top. 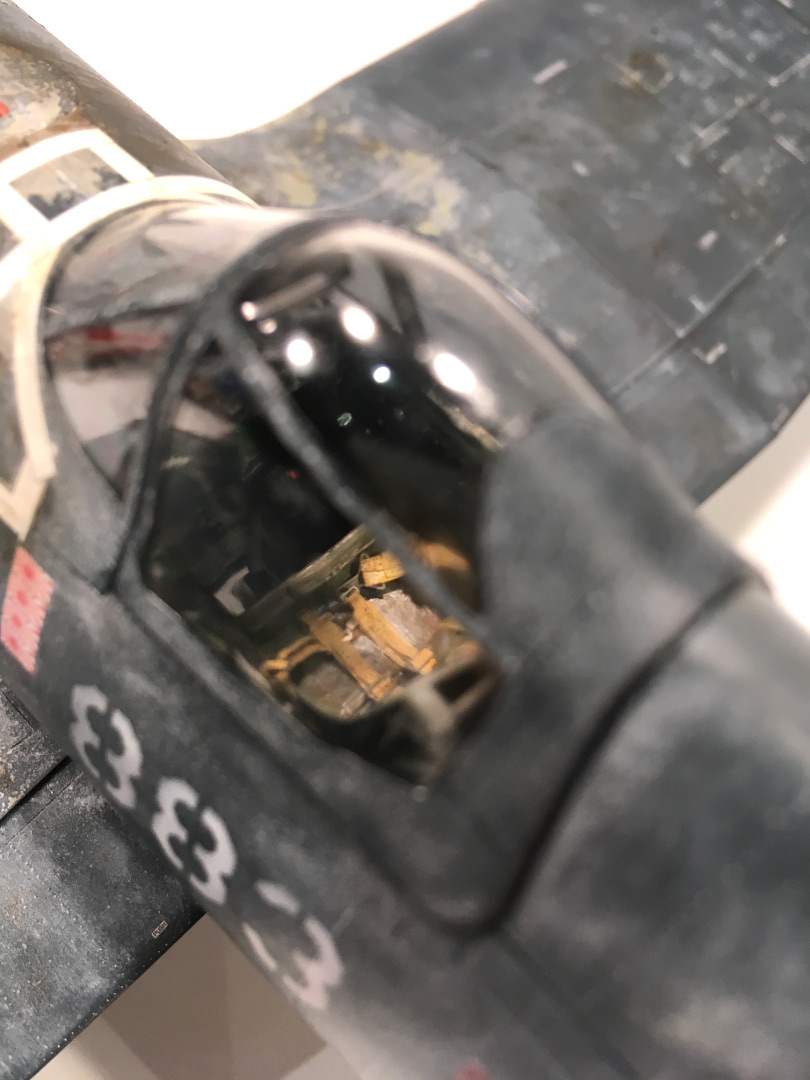 In order to chip the top coat, you need a chipping medium underneath.  This is basically a water-soluble varnish which will undermine the top coat once agitated with water on top.  I use some decanted hairspray because tests by guys I respect like Will suggest it’s probably as good as you’ll get for small chips. 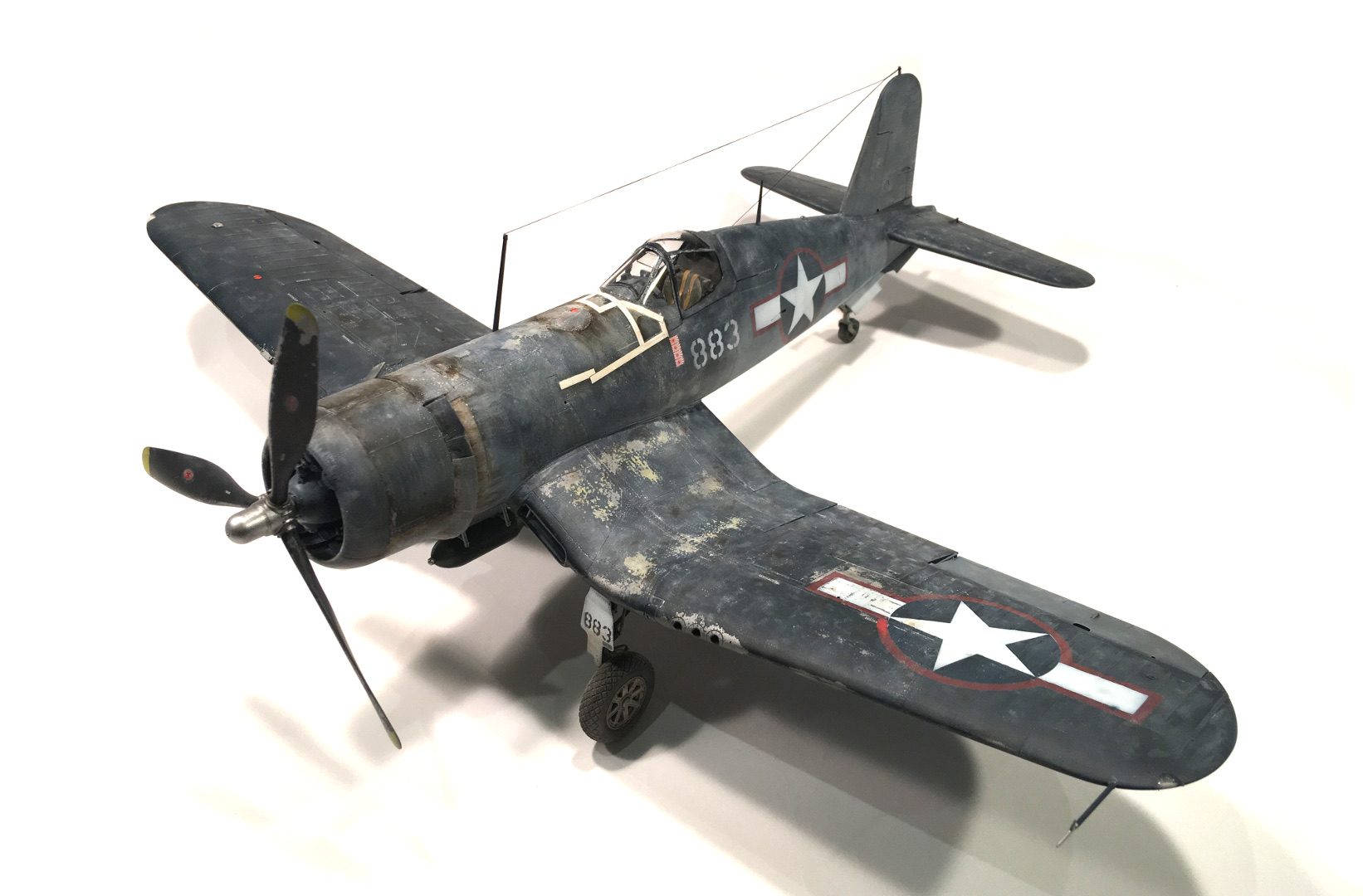 I wanted some bits of yellow chromate primer poking through holes in the top coat, so the first step was to put some yellow chromate on it.  You don’t need a huge amount, it’s just got to be a few bits, but you may want to chip it.  Chipping it creates a nice hard edge which better resembles what I was seeing in references.

Oh, a quick aside: it’s both possible and easy to chip MRP lacquers.  You don’t want to put it on thick (ever), and it’s certainly best to chip it quickly after application, but it chips really nicely. 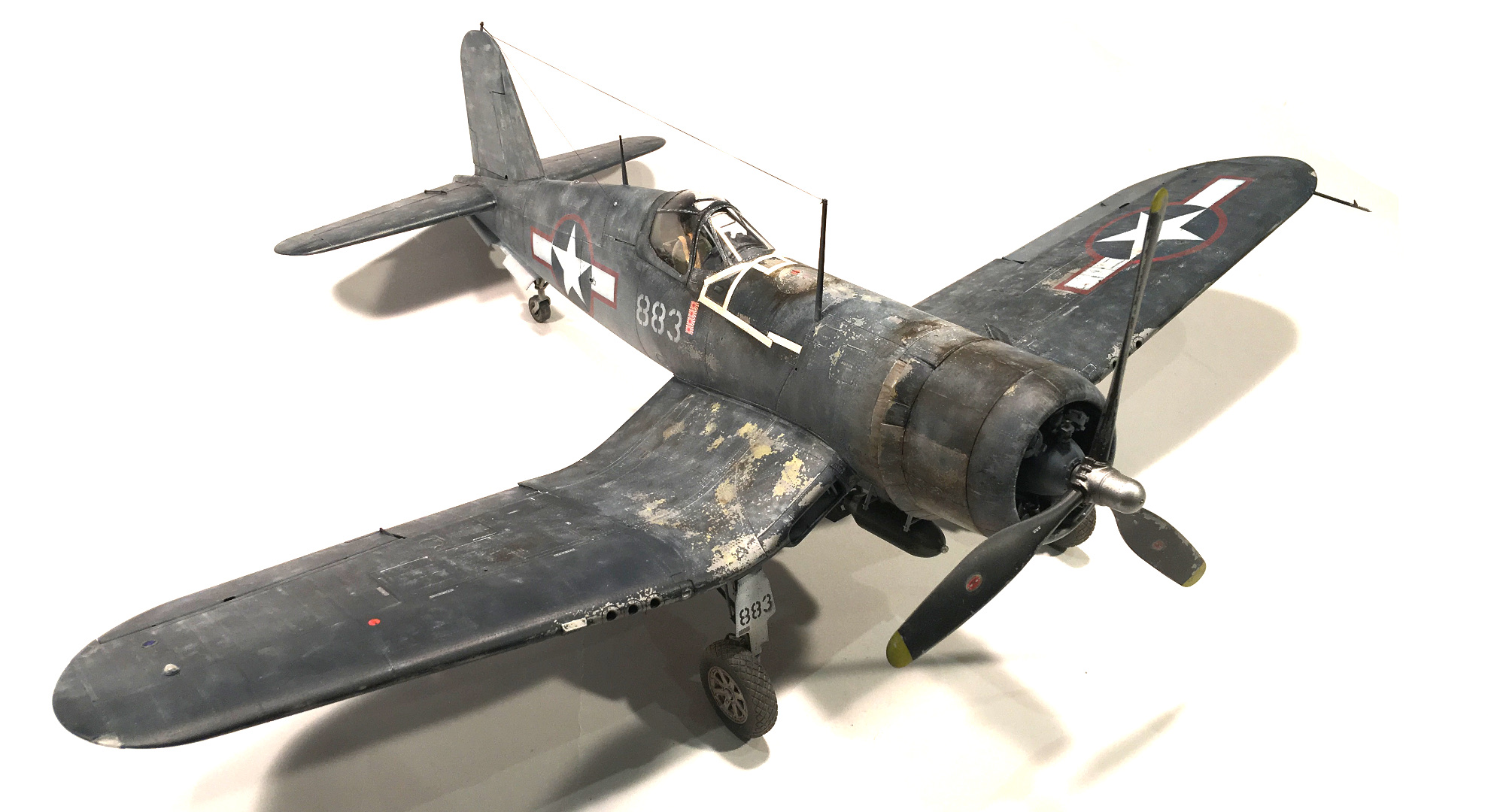 Once you’ve got your yellow how you want, it’s time to seal it in.  This is going to be a recurring theme.  Throughout this build I used MRP clears because they give a hard lacquer surface that I don’t need to worry about breaking through. 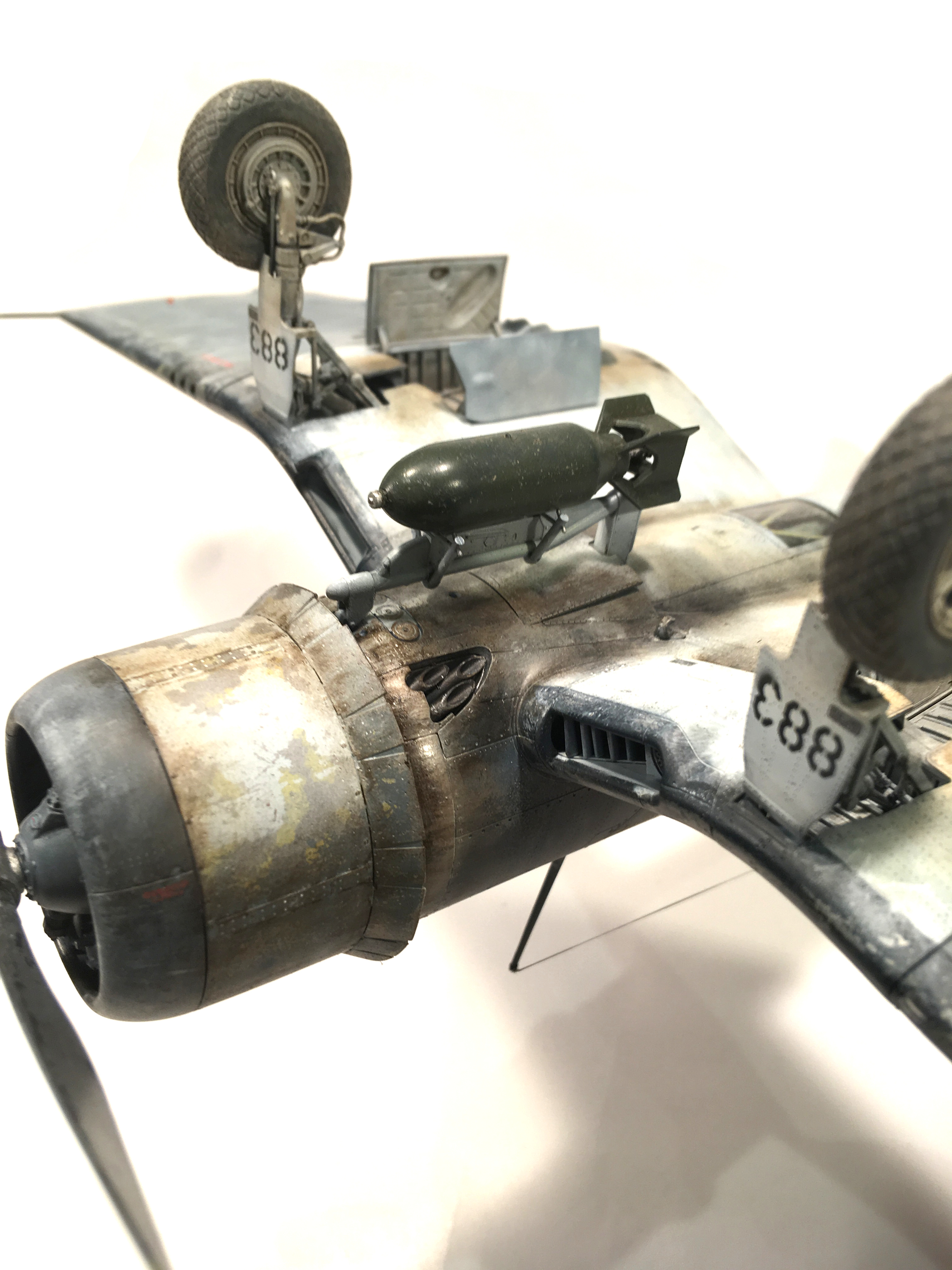 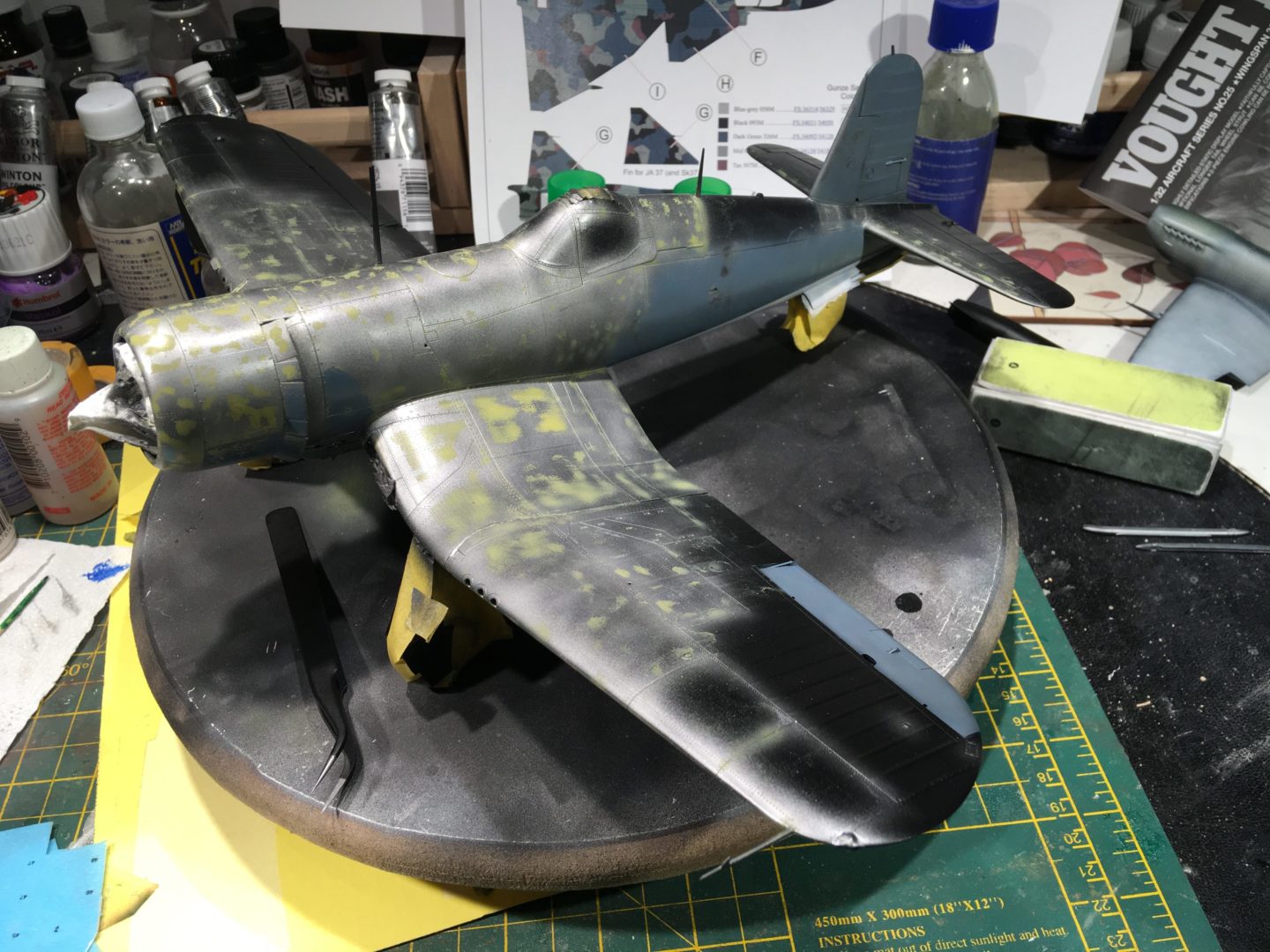 I like priming in black, not only because it makes the model look really good as a stealth version, but because you then get to work towards the final colour you want by building up.  This allows for more colour and opacity variation which I think looks good on a finished model. 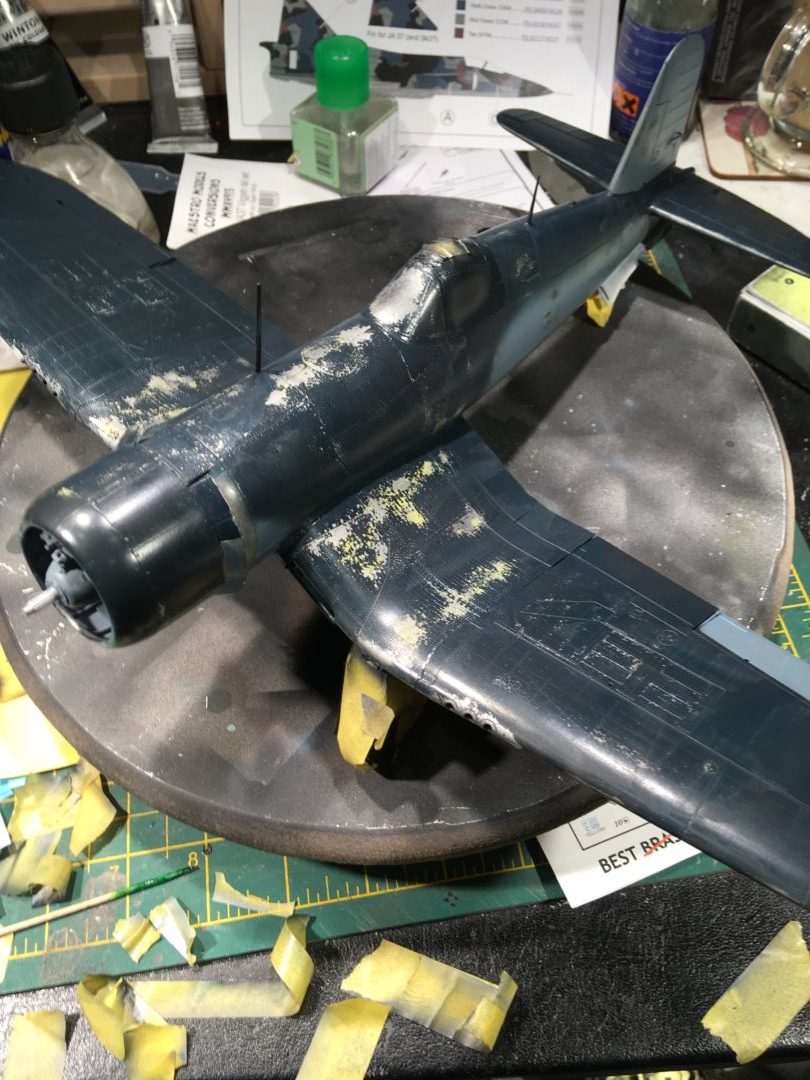 However, between the black and the final desired colour, you can do so much more.  As explained here putting different colours between the two allows you to subtly shift the tone of the top coat.  The only requirement is that the base remain darker than the top coat.  In this case, I used a different approach for each colour.

The white was straight out of Doogs’ video:

While the Sea Blue itself was the most involved because here we really want to subdue the bright MRP colour, again basically following Doogs:

However the top coat got varied a bit here, with adding some black or intermediate blue in places, and more Hull Red underneath for the replacement panels which were in the all-over-gloss-sea-blue scheme.

For all the schemes, I re-blacked over the silver/yellow areas with Swedish Army Black before starting on the marble coats.

With these colours being several layers of MRP, I wanted to waste no time in getting the chipping done.  I did one colour per day, mask, paint, and chip.

You’re getting the idea now, as soon as an area is done, it needs to be sealed.

The next few weeks were spent rubbing oil paints onto it.  The main colour used was white.  Surprise surprise, it was the best colour to reproduce coral dust.  Some other colours were used as well: in particular raw umber for both mud and oil stains, and payne’s grey as part of the exhaust staining.

Again, I noticed that it really helps to seal each layer of oils.  It helps keep them as separate layers. 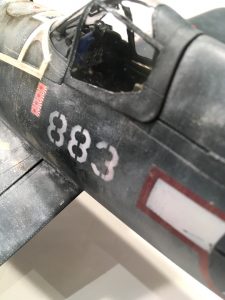 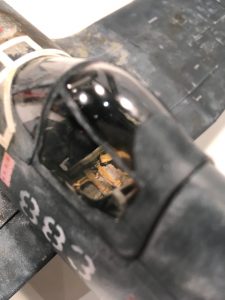 When I decided to buy and build this kit back in the early summer, I knew that I would really need to step up my skills in order to do it justice and to achieve the vision I had for it.  I had recently finished the Su-35 and that was practically unweathered because back then I had zero confidence doing aircraft weathering.  Then came the MiG-21 with successful chipping and salt weathering (which only ended up used on the bomb).  The Millennium Falcon saw successful use of the coloured marble coat but unsuccessful first use of oils (it’s still waiting to be completely repainted).  The Comanche, more successful oils, successful use of tone in a dark scheme.  The Type 23 Frigate, got the deck to look good with oils.  The Viggen, very successful, but that was built alongside this one. 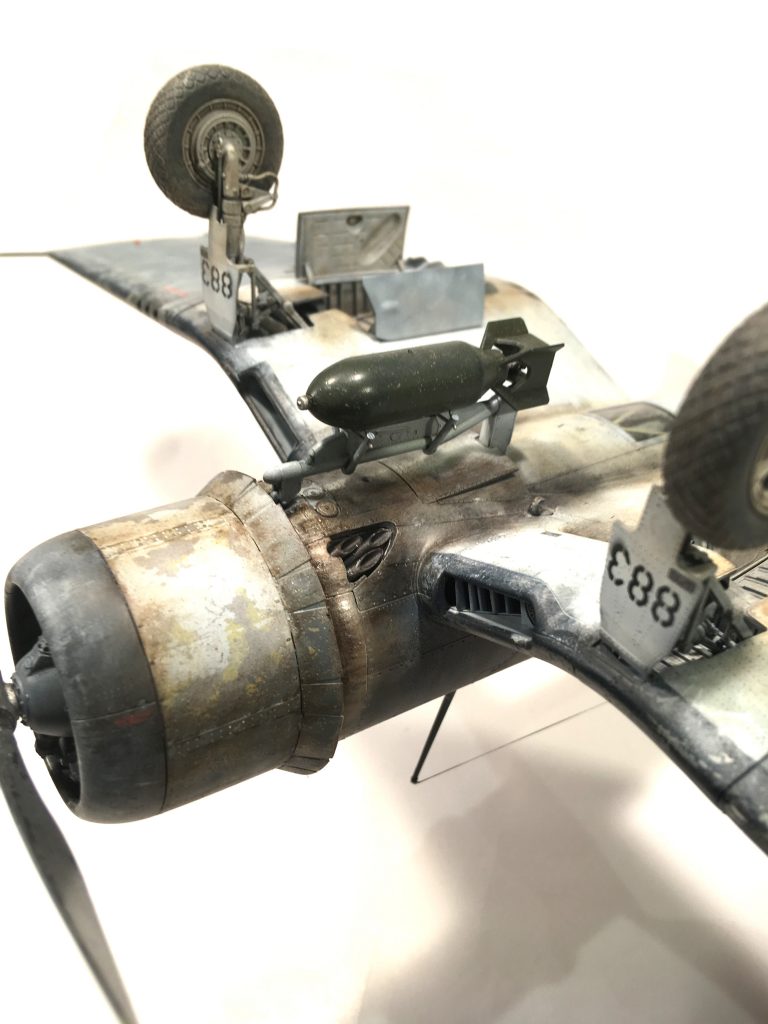 So looking at where I was earlier this year, with no confidence, to now looking at this model where I achieved what I wanted from the story and weathering, feels quite remarkable.  It’s certainly given me far more interest in big 1/32 scale props, because I know I can make them look good.   That’s not to say that I think every build I complete will now be at this level, in fact I’m sure they won’t be: this one was planned for months and was the focus of all my learning.  But it has certainly raised the bar on what I consider to be an acceptable build. 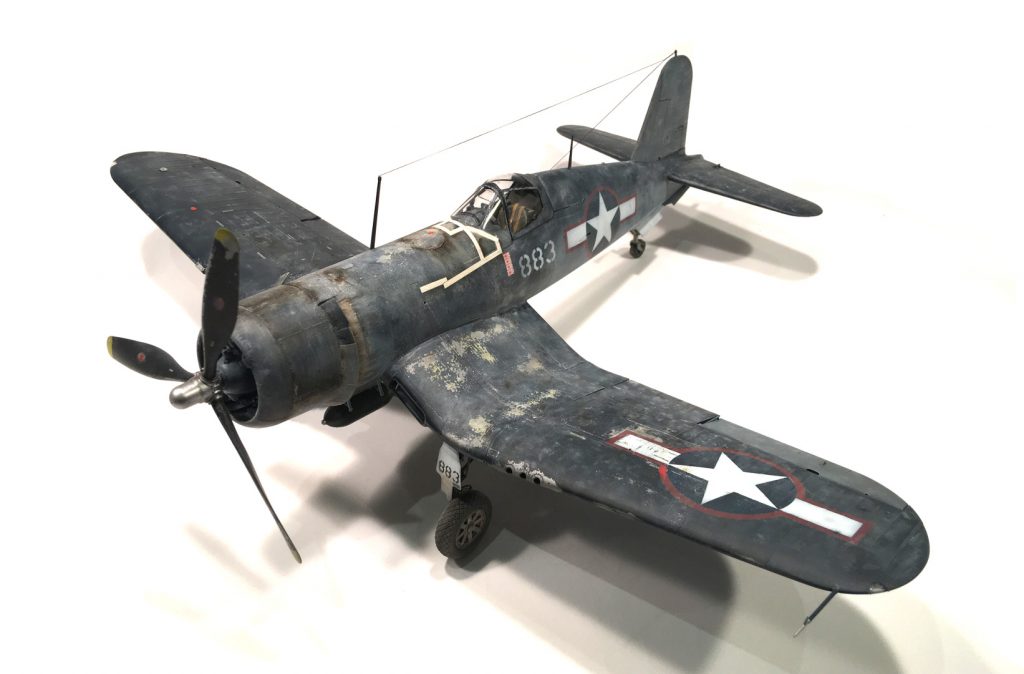 One interesting thing is that a lot of the work that went into this paintwork isn’t really visible.  That’s mainly because the oils have crushed everything down so far.  It’s a shame, but that’s also part of the story here.  Future builds will give much more opportunity for showing off use of tonal variation in paint. 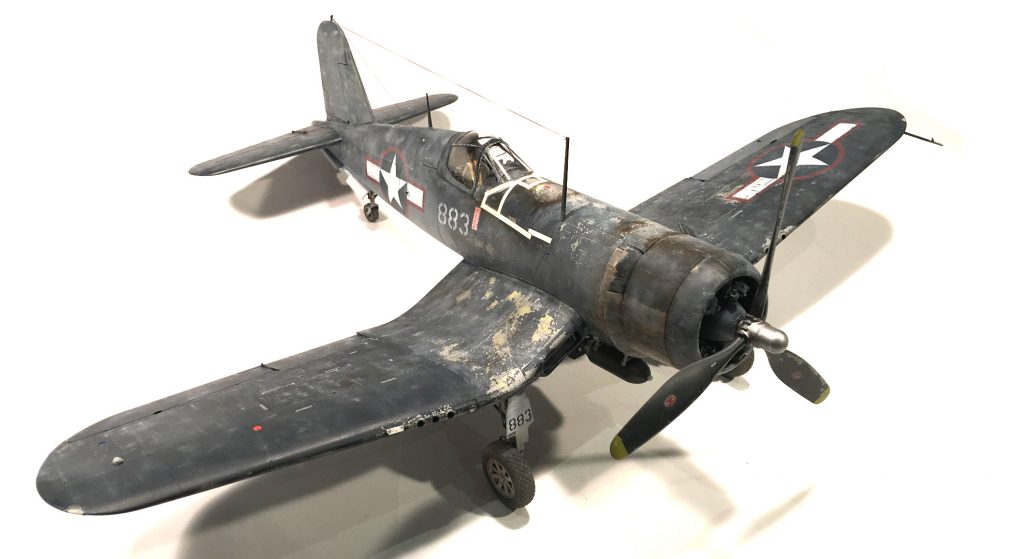 Very nice, love the weathering… inspiration for my forthcoming build

Great read and super job on the project! Will be using this for my 1st model experience… the F4u-1A by Tamiya. May be asking questions in the future.

You’re very welcome to. I would suggest dropping any messages to my Facebook page (https://www.facebook.com/manvskit/) as I will usually see those within hours but might not see anything here for… a bit longer.