When I saw the price of this kit, I thought that looked too good to be true.  However reviews online suggested that it was perfectly adequate: although it lacked Tamiya’s detail, a lot of that was accounted for by not including the full engine or the vast and beautiful array of wing surface rivets that you’re going to have to eradicate because you know, the wings were smoothed.  Plus, it didn’t have those terrible rubber tyres. 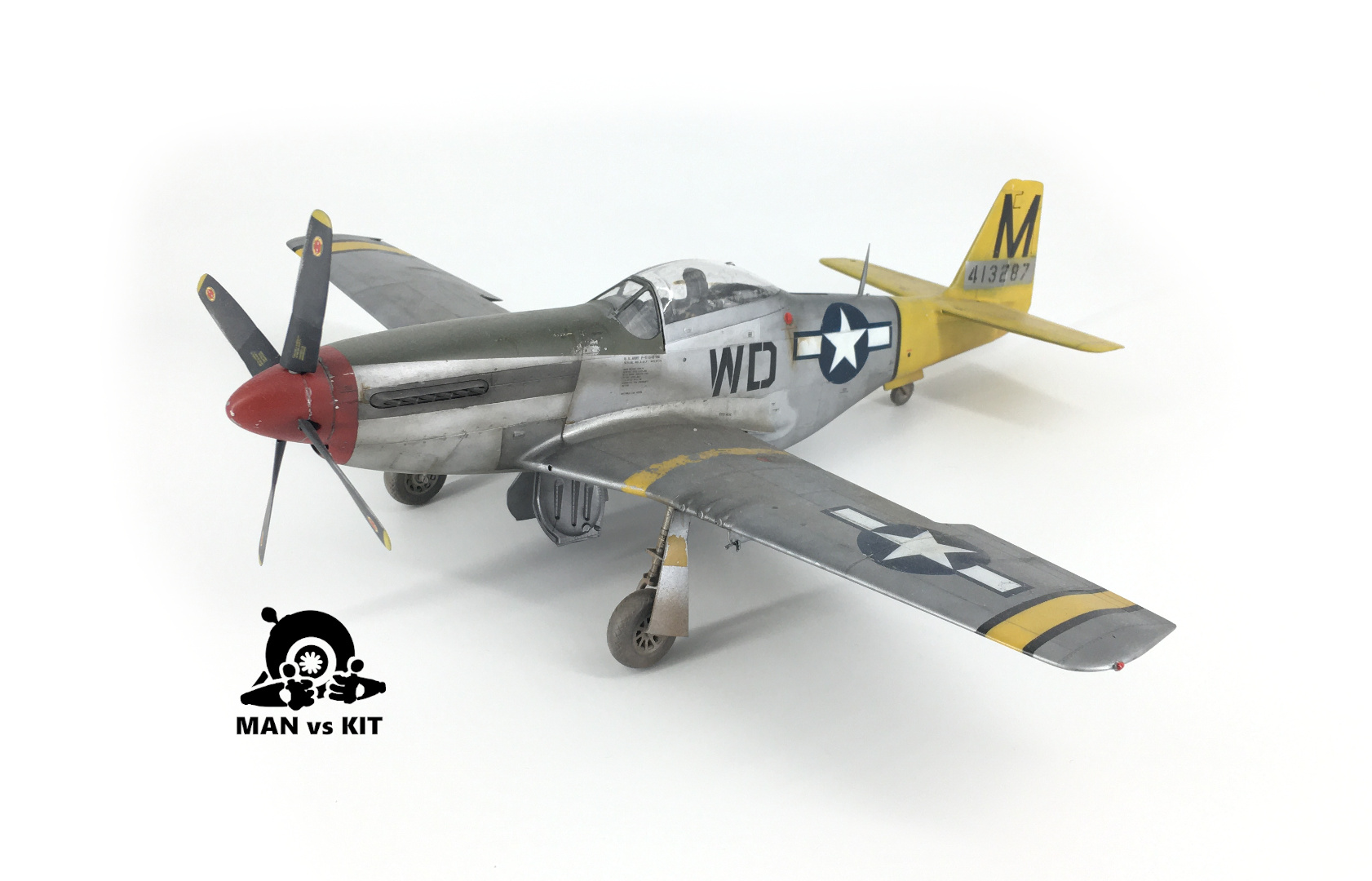 Fair enough, I thought, but upon building this thing it became apparent that it didn’t just lack Tamiya’s detail, but their attention to detail too.

The sprues gave some warning of what was to come.  The parts have a slightly rough texture that has to be removed (yes, that’s every single bit of the outside to sand smooth, so do your own calculation on whether that is more or less annoying than just removing the rivets), and sprue gates are very large throughout.  Not only are the gates large, they attach directly against the side of the parts which guarantees quite significant clean-up efforts.  Worse, there are some which are just incomprehensible: such as on the flaps, which are moulded vertically off the sprue as single pieces, with sprue gates that stretch up the front face of the part.  That’s a very visible location and it wasn’t even worth it in exchange for a great part because the flaps still exhibit very large sink marks.

However, I will say one thing in this kit’s favour: it doesn’t have those awful rubber tyres. 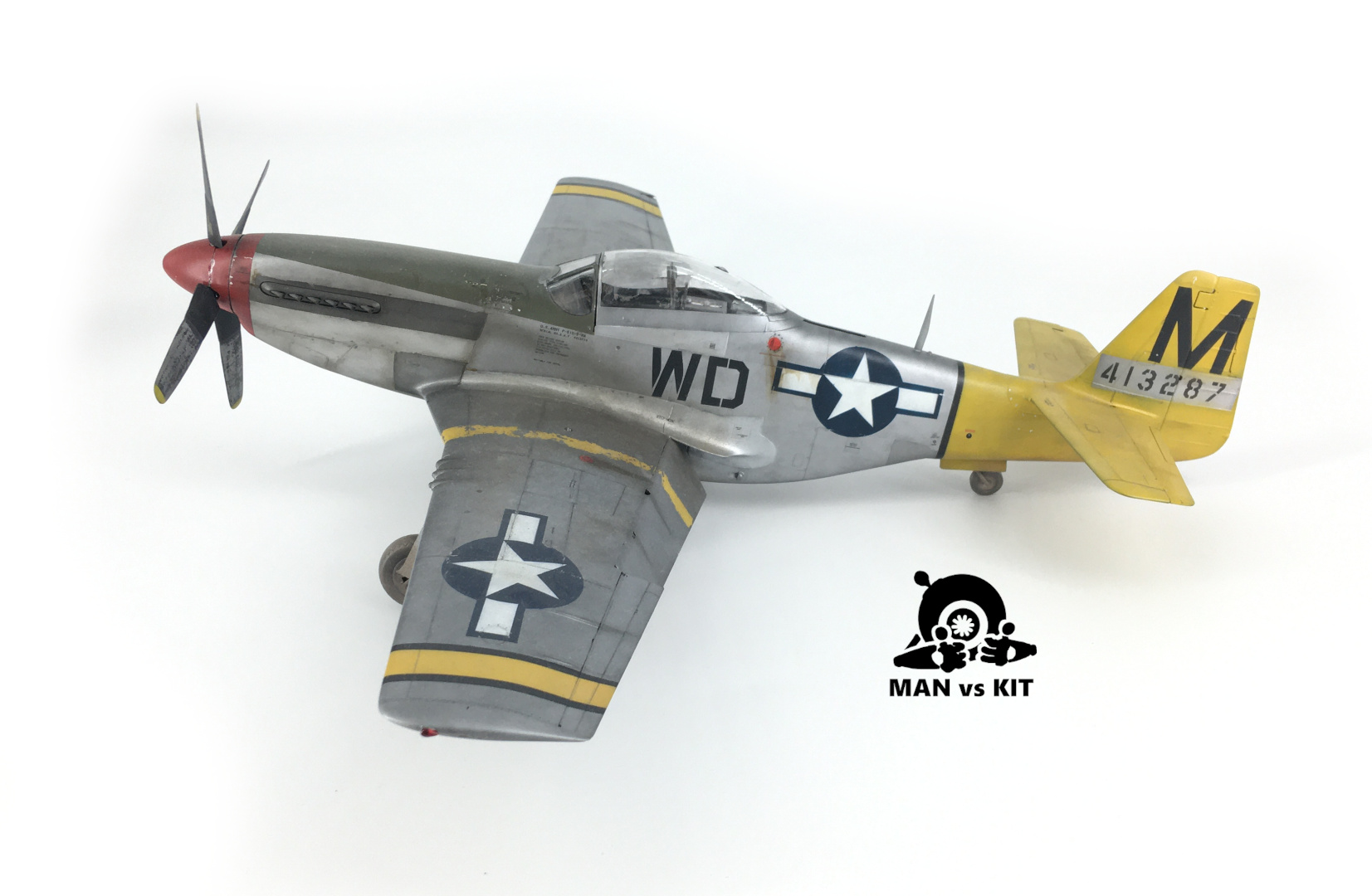 I nearly put this one straight back in the box before I had even trimmed all the cockpit parts off the sprues.  There is a surprising amount of flash for a modern tooling, the parts aren’t especially well moulded, and nothing goes together with any authority.  Remember too that I built this directly after Special Hobby’s Yak-3 and that short run kit made this look bad. 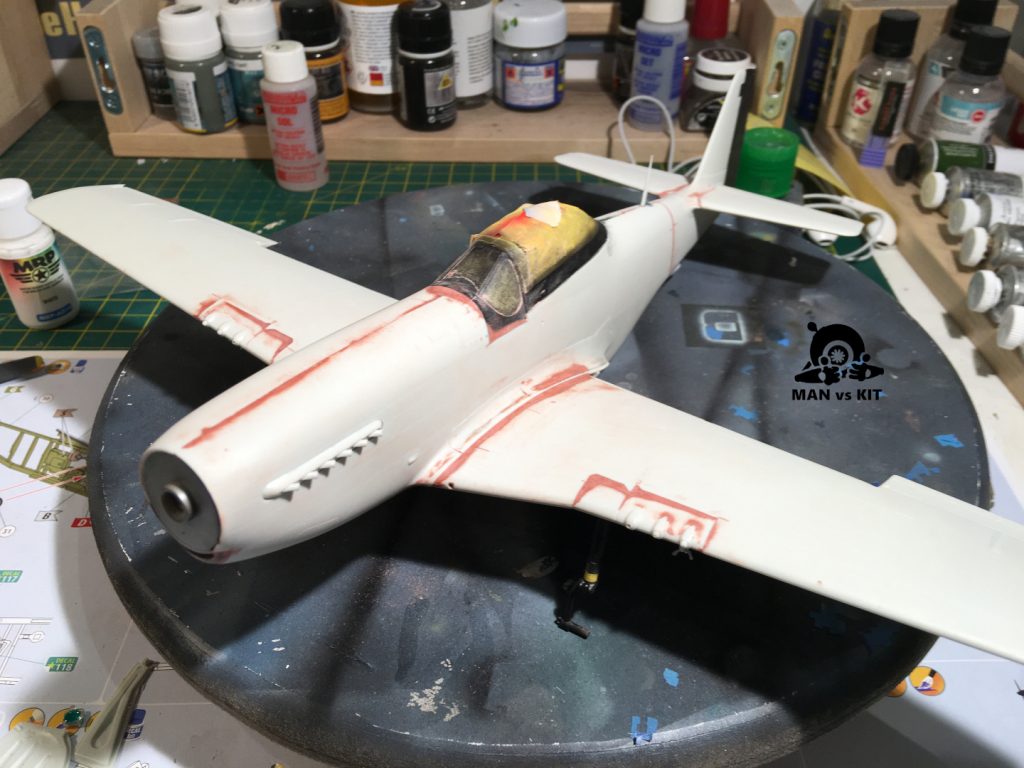 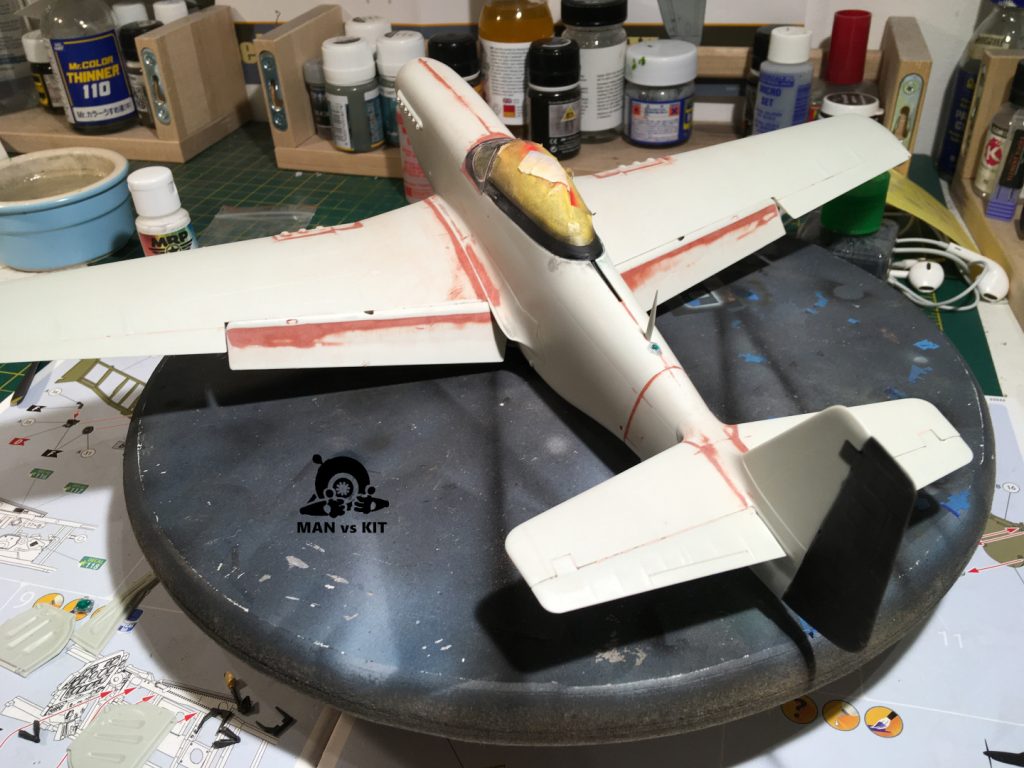 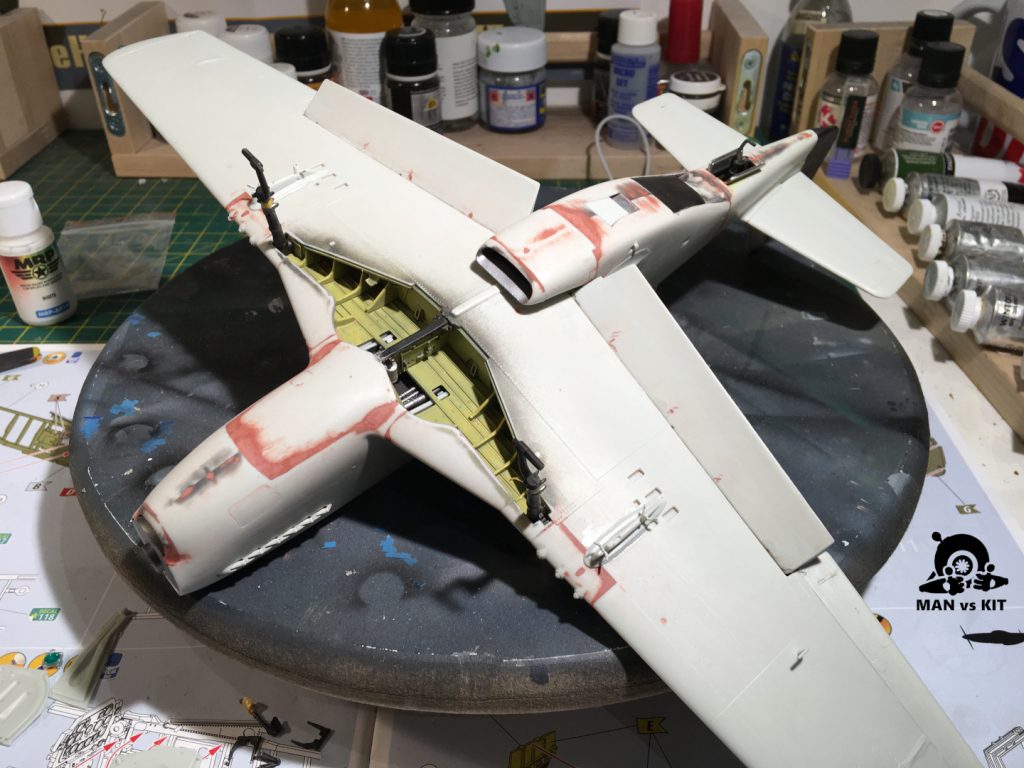 Once you get to the exterior, it becomes apparent that the huge sprue gates hardly matter, because the fit is so poor that you’re going to have to fill and sand far larger areas that just the gates.  The red areas here give some indication of just how much filler this kit needed. 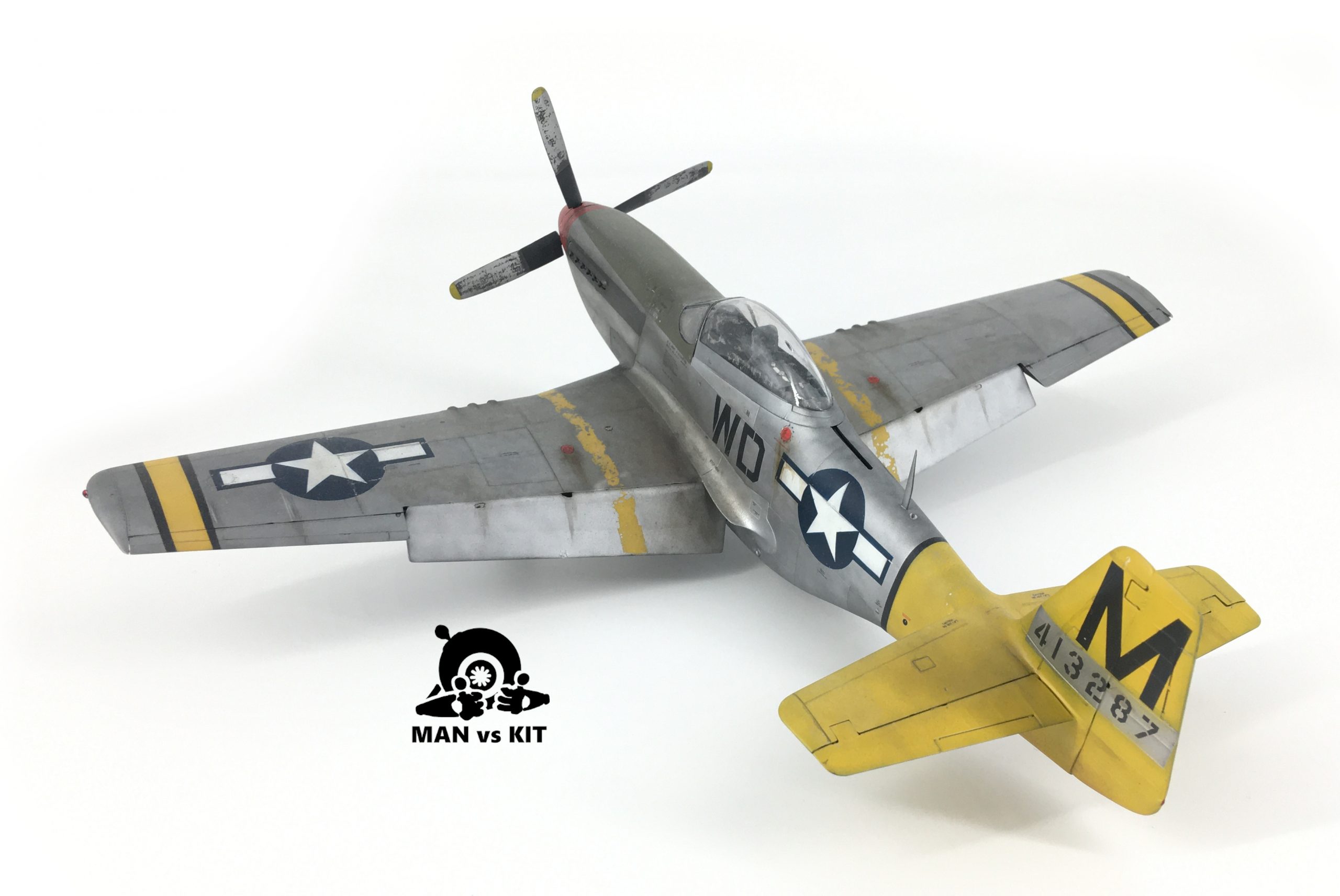 I mentioned earlier that the rough texture means the entire kit has to be sanded.  Now, I’m sure someone will argue that the kit schemes are both camouflaged and thus it doesn’t matter as much as on an NMF aircraft.  I think this is wrong.  For one thing, the camouflage applied to P-51s was only on the upper surfaces, so the sides and underneath are still NMF.  For another, even camouflage paint shouldn’t have that texture and it will make the model look poor.  A third objection is that if you sand this thing smooth, you had better sand it perfectly, because NMF in particular will show up every little scratch left over (and note that this applies even if you don’t sand the whole thing, because you still had to fix those part joins). 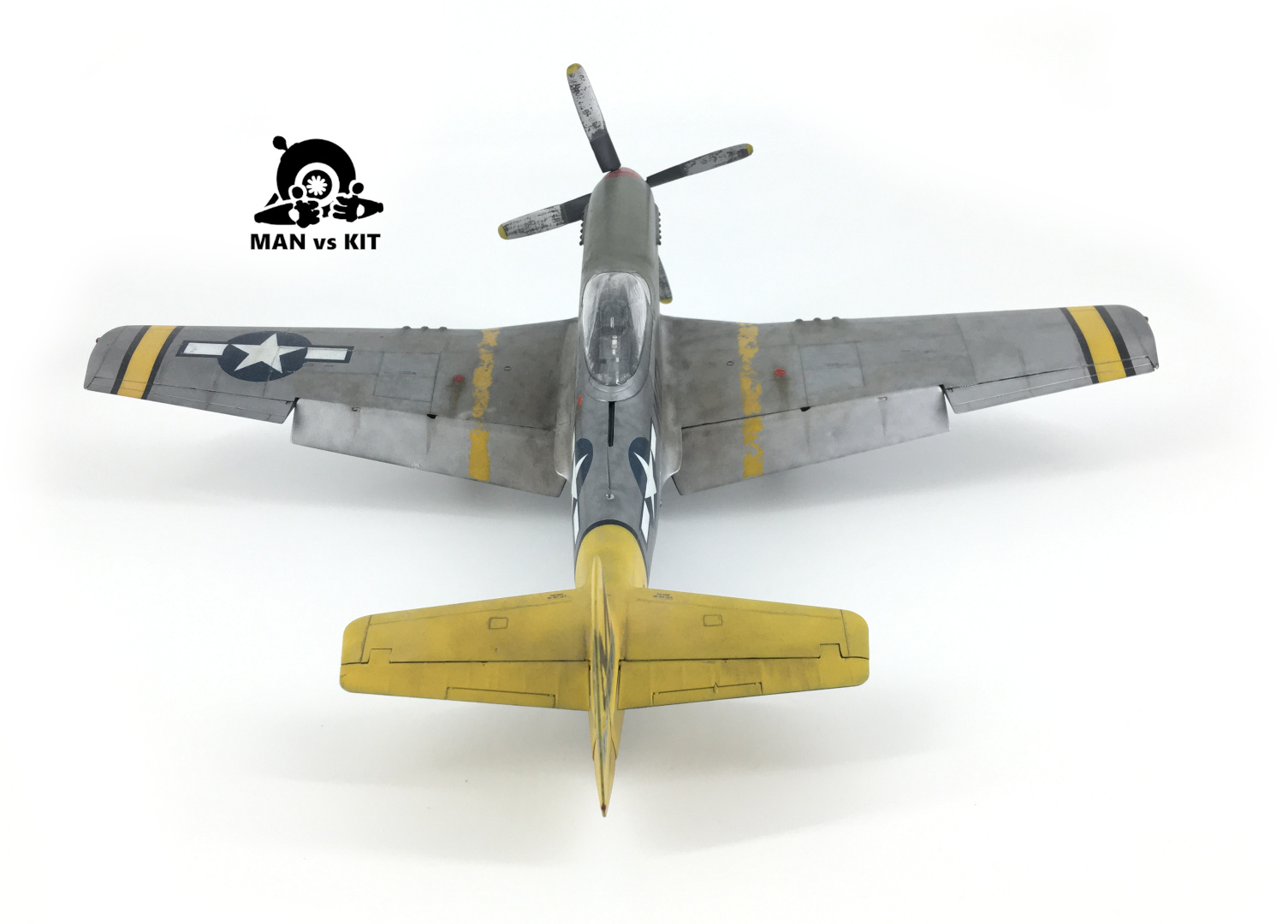 There is a bit of a theme to modern Revell kits: they have many awful things like this and they are very popular among a certain demographic in the hobby which dislikes the idea that any schmuck can buy a Tamiya kit and turn out a nice enough model.  Instead, these people prefer this sort of kit because they can do a bland, boring finish but still feel smug about having done a lot of sanding.  I’m starting to wonder whether some manufacturers are deliberately playing to this demographic and saving a lot of money in quality control along the way. 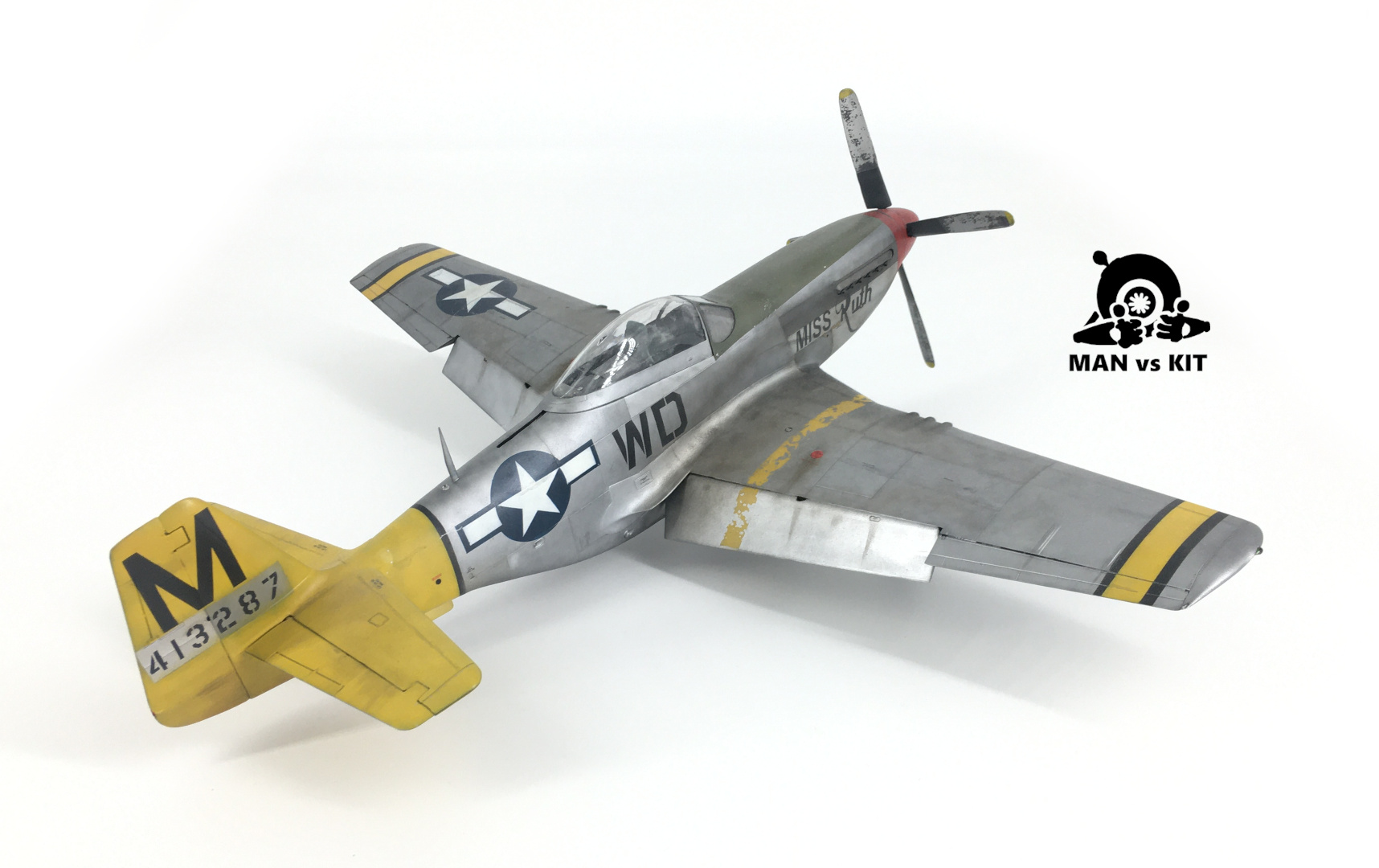 My dislike of this kit bears comparison to my feelings on the AMKat earlier this year.  That’s probably worth revisiting for a full article, but in brief, terrible as this kit is, I find it less objectionable.  This is mostly because of the promises made: this one proclaimed that it is a cheap 1/32 P-51, which it is; whereas the AMKat as accompanied with loud boasting about being the best kit ever made, which it isn’t even of the F-14D.  What I hated about the AMKat was the obnoxiousness of the whole approach, on top of the kit being a letdown.

Painting this kit was a lot of fun, and it’s where I think you really do have to decide whether the extensive fill and sand work outweighs the price difference to the Tamiya.  That’s an intensely personal decision and one that comes down to what you enjoy.  Once you have the kit to that stage, it’s a nice, big, Mustang model and it looks great.

And at least it doesn’t have rubber tyres. 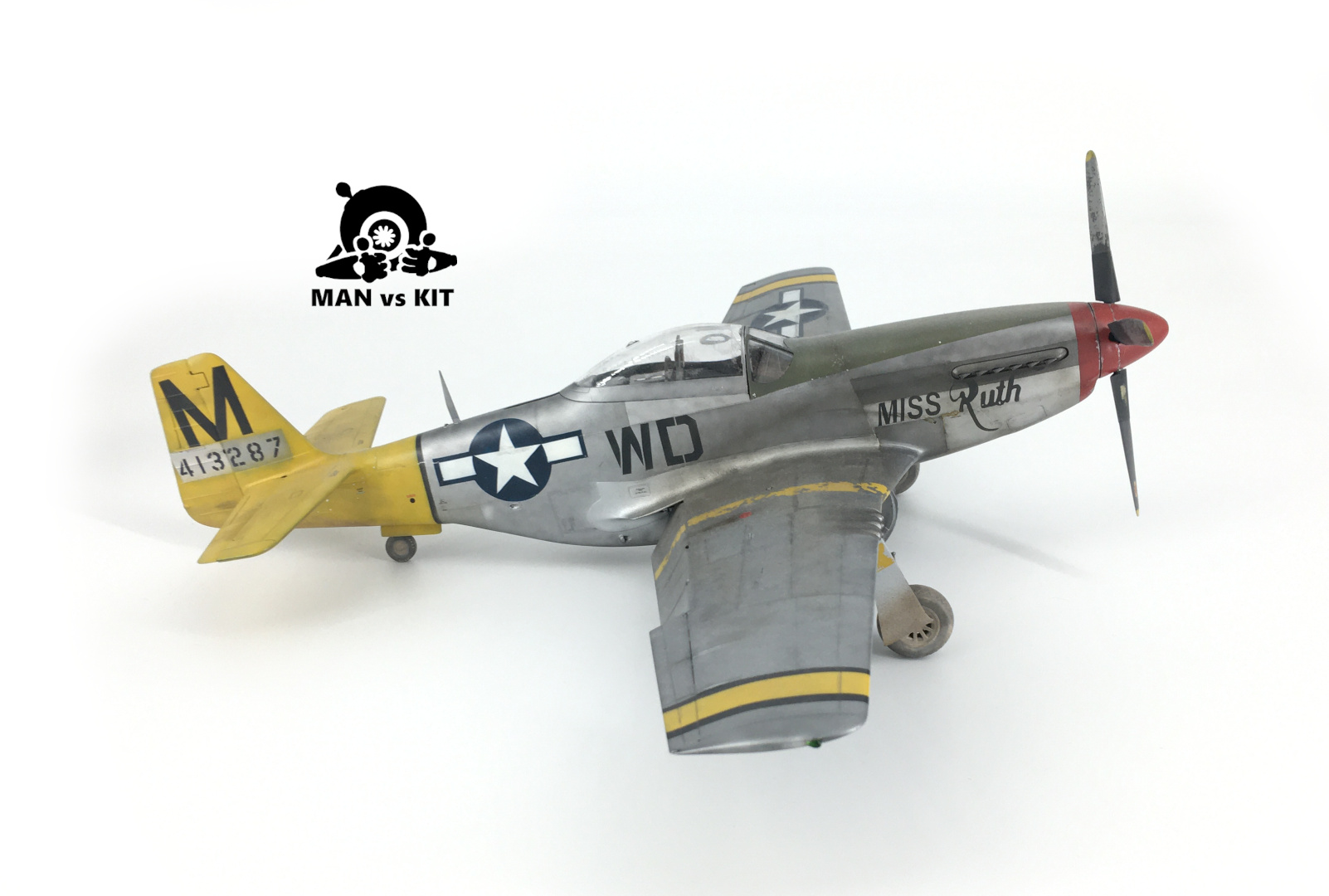 Some thoughts on painting this kit

I have previously stated that Kcolors are my favourite metallics.  That hasn’t changed, but they have been suffering supply issues for a long time now, and were hard to get hold of even before that.  Therefore I’ve been looking for a method to make Alclad or MRP metallics look nearly as good.  Trying to get interesting paint effects has been a bit of a theme this year, and I have always struggled with metallics.  However, I came to this model with a theory to test. 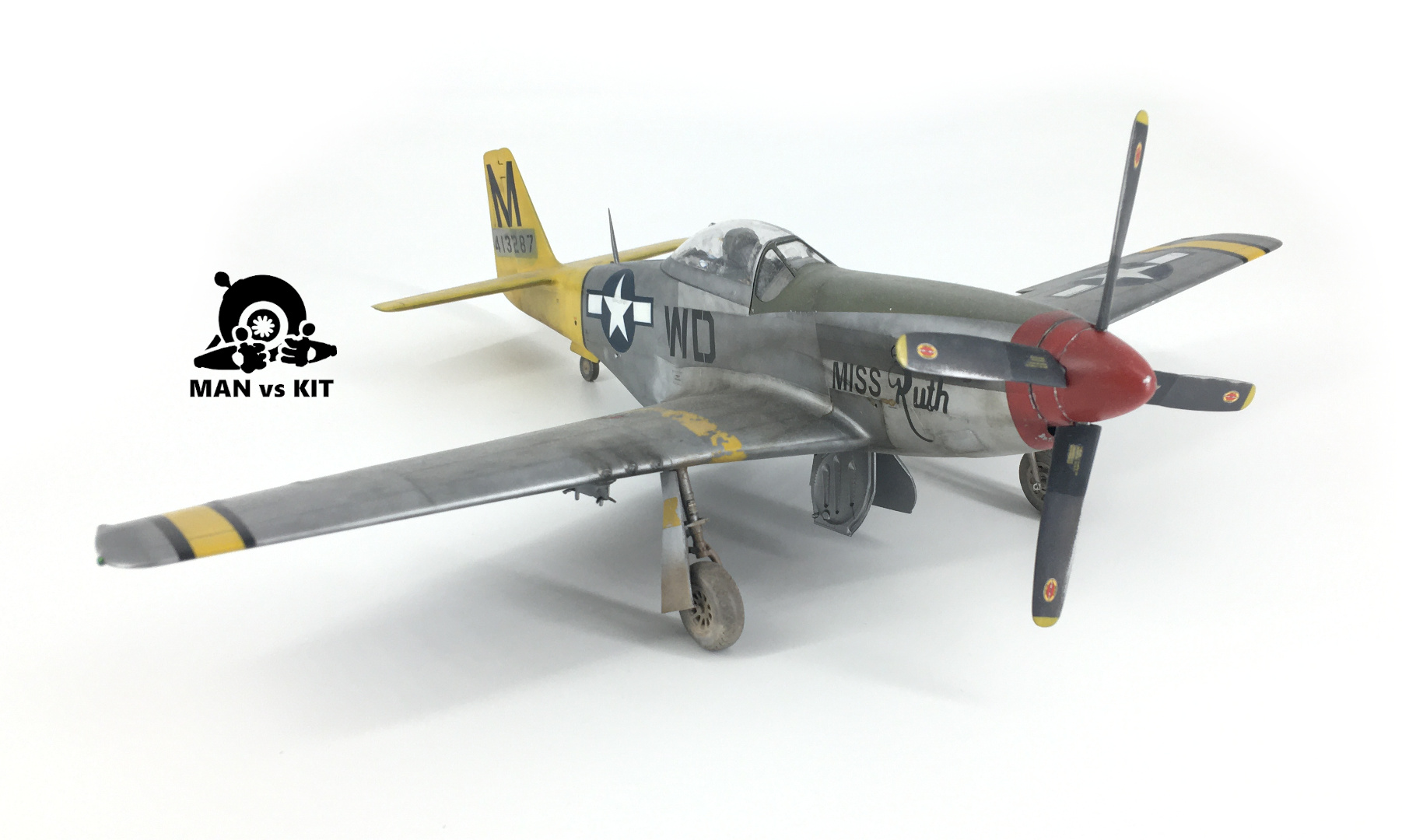 That theory (courtesy of Doogs’ Models old black base videos) is that it should be possible to modulate the look of metallic paint by varying the base colour, and marbling the metallic paint onto the surface instead of going for a smooth expanse.  However we know that metallics do need a very dark base colour because that is what gives them their shine.

I started with GX2 acting as a primer: it’s a gloss black lacquer from Mr Color which isn’t a primer, but it works best on bare plastic, and it is tough enough that it does a lot of the things you want a primer to do.  So specifically for metallics, it is worth the slight reduction in toughness.  That gives a nice gloss black base, onto which I picked out the different panels in a series of very dark colours: Gloss Sea Blue, Eggplant Grey, AMT Dark Grey, RLM 70 which is a very dark green, and a dark ebony brown.  Then marbled the metallics on top of these. 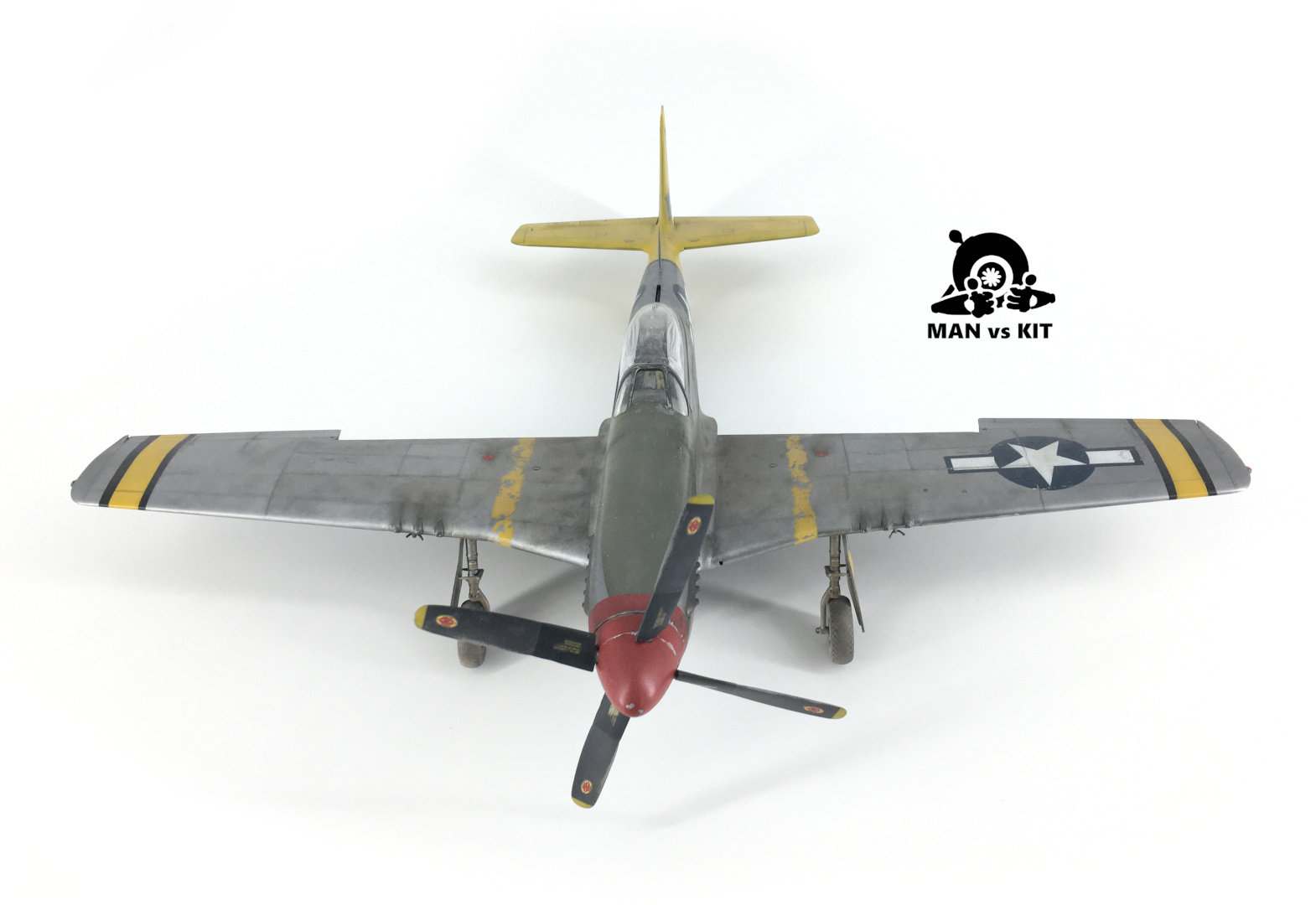 Note that the P-51 doesn’t have a consistent metallic shade over the entire surface.  I used Alclad Aluminium for the lacquered wings, and shades including Duralumin, White Aluminium, Dark Aluminium, Magnesium, and Steel for other panels.

Getting a sense of wear on an NMF aircraft is tough and I haven’t got it right yet.  The wings would have benefitted from extending the even application of the metallics further inboard.  As the P-51 had the wings smoothed and aluminised, I wanted some variation between the untouched outboard and walked-on inboard, so the very outboard panels didn’t have a marbled effect.  The effects are quite nice but my distribution wasn’t right.  I’m still wondering whether overlaying two metallics and chipping through them might be worth trying in order to show the aluminised top coat being worn away. 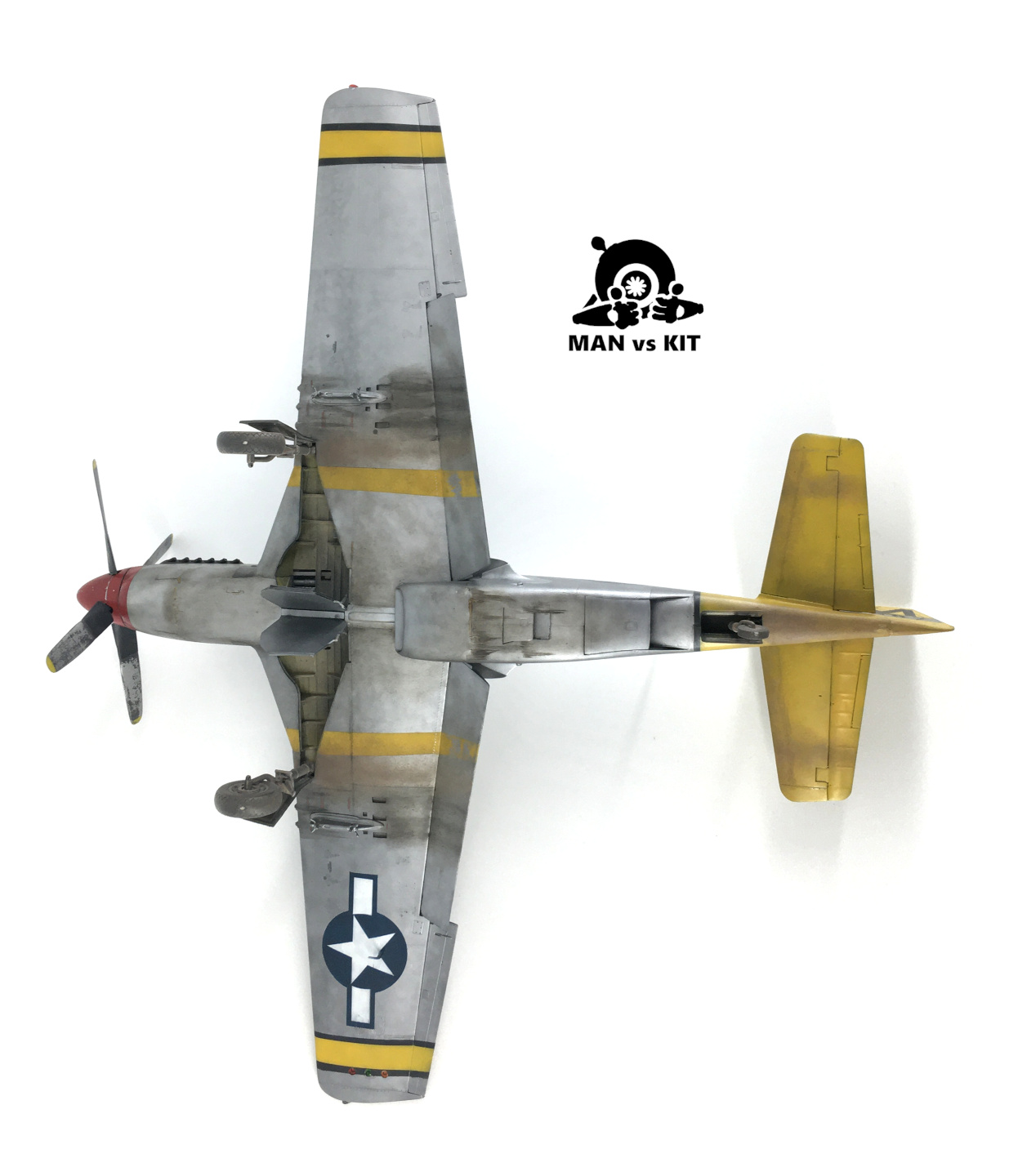 The model represents an aircraft from the 52nd Fighter Group based in Italy.  I have rather liked these yellow-tailed ones since doing the scheme with Eduard’s 1/48 Mustang last summer.

The masks for the insignia and the markings are from Topnotch. 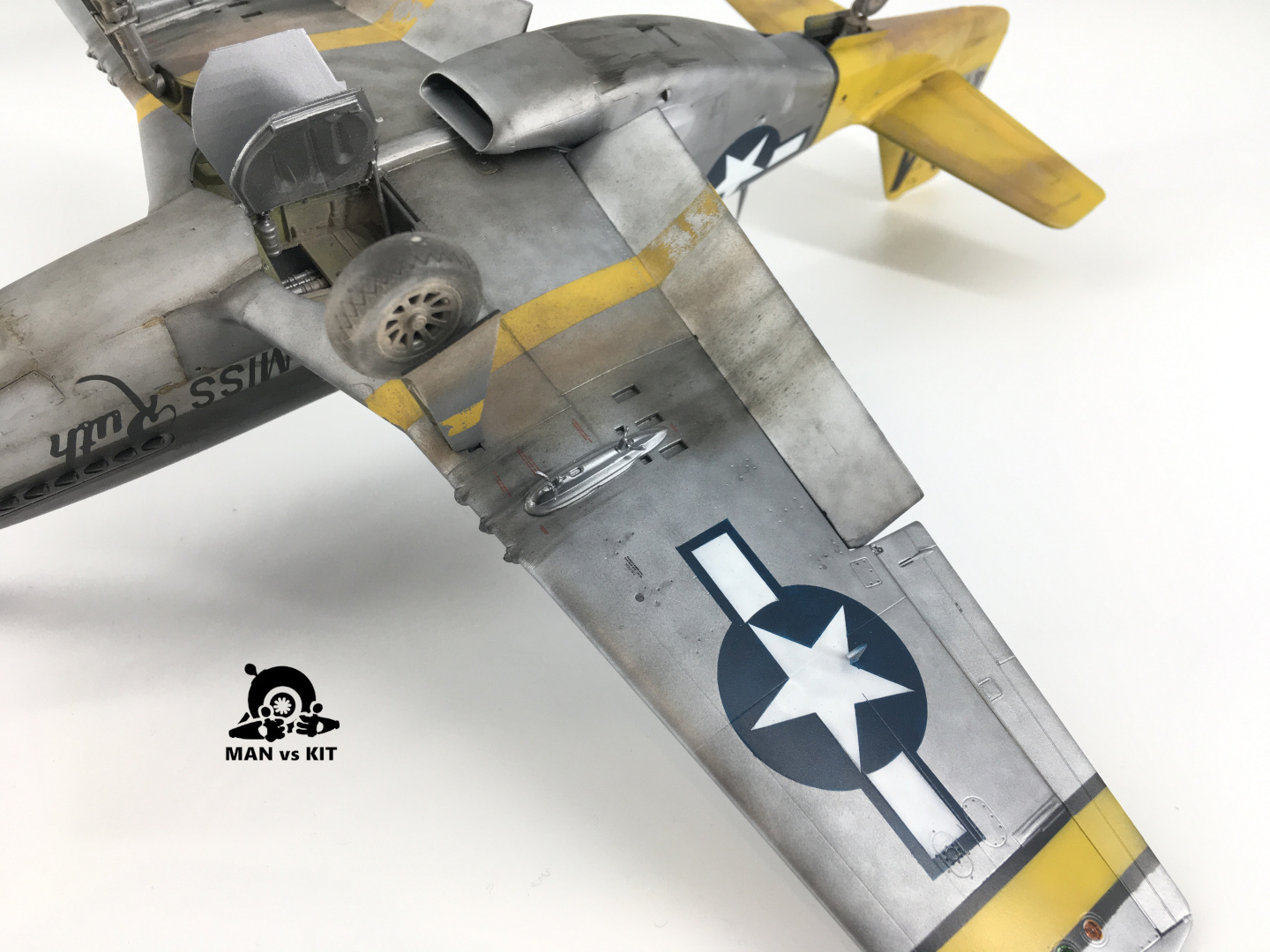 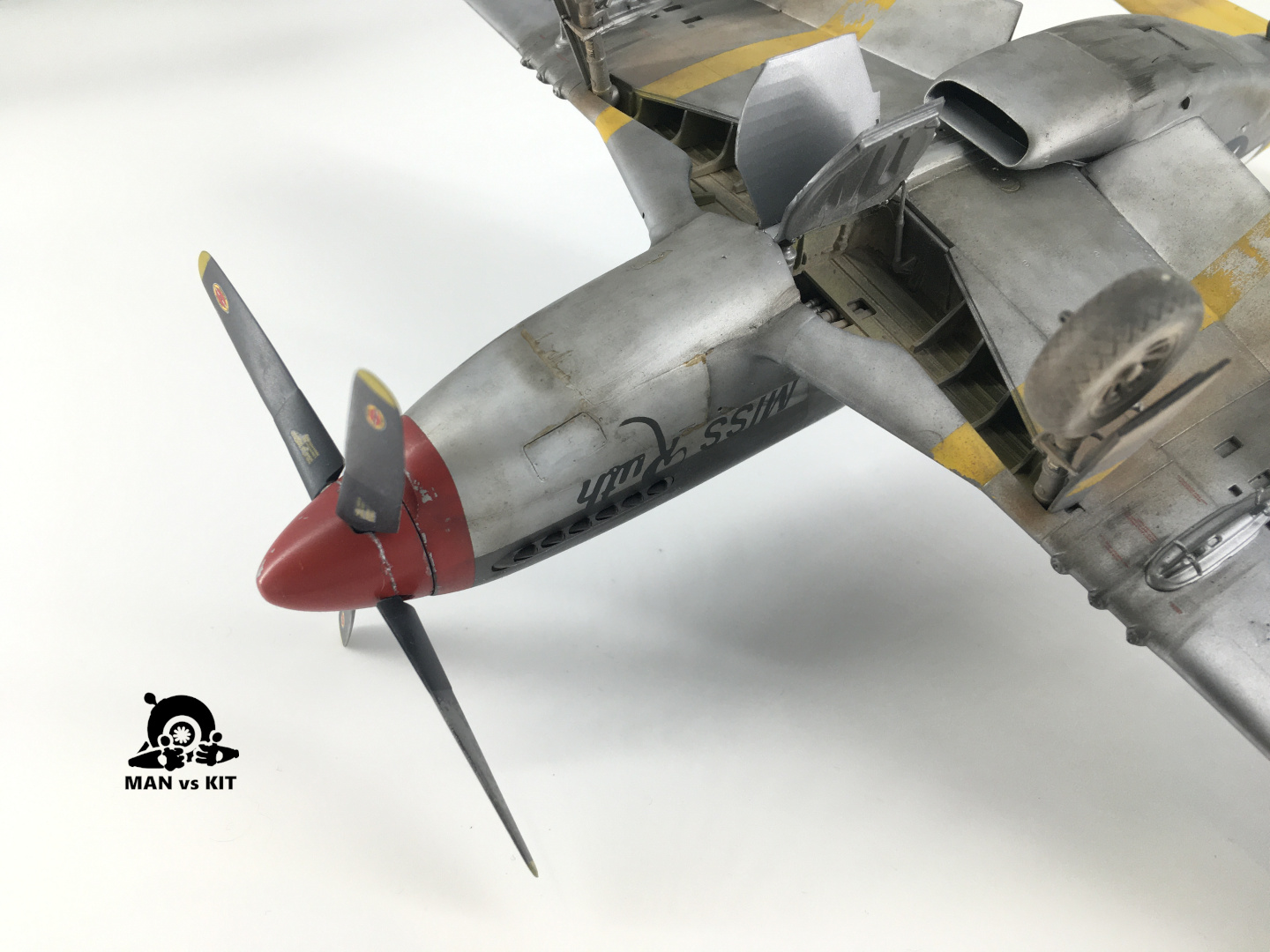 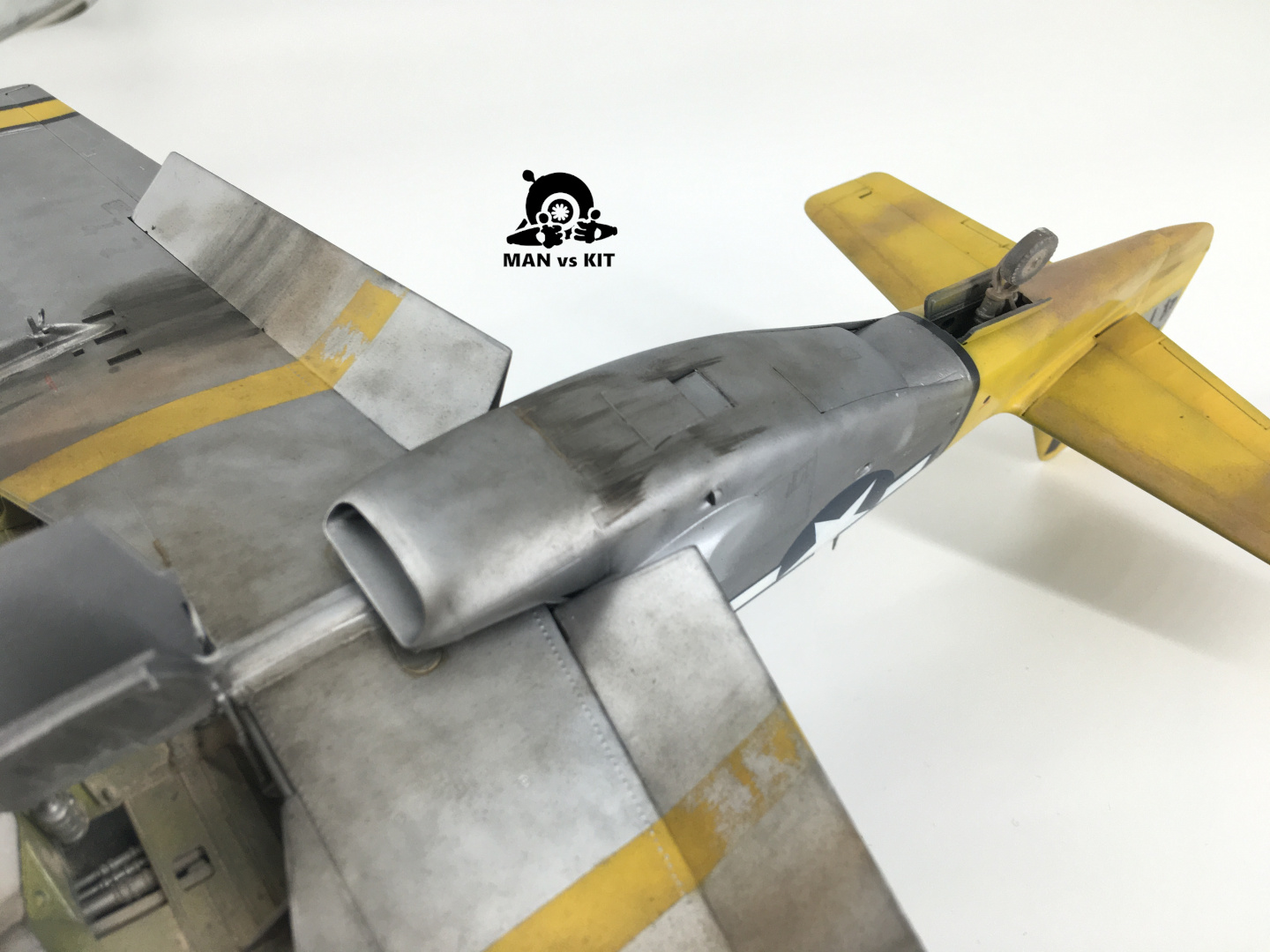 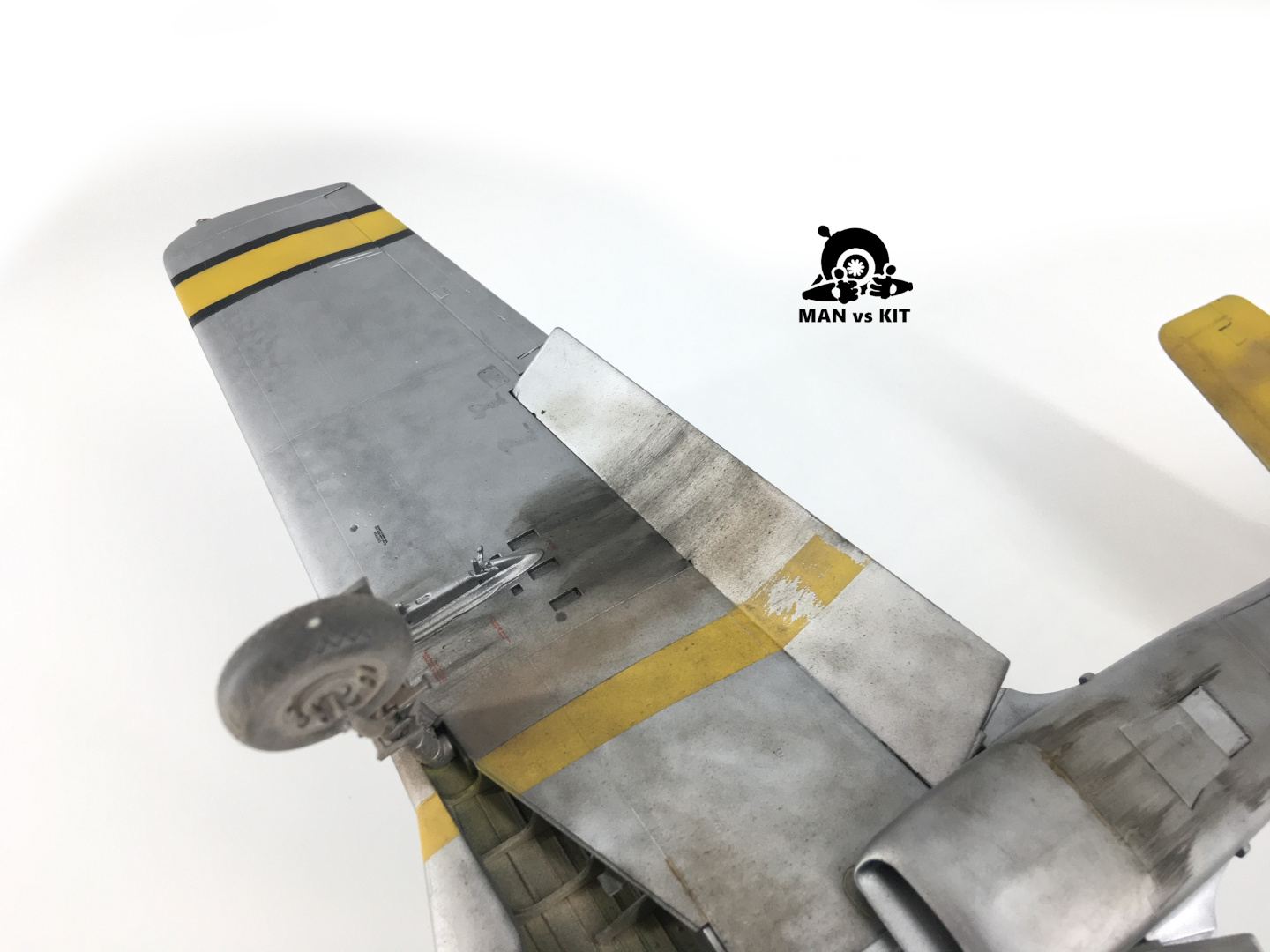 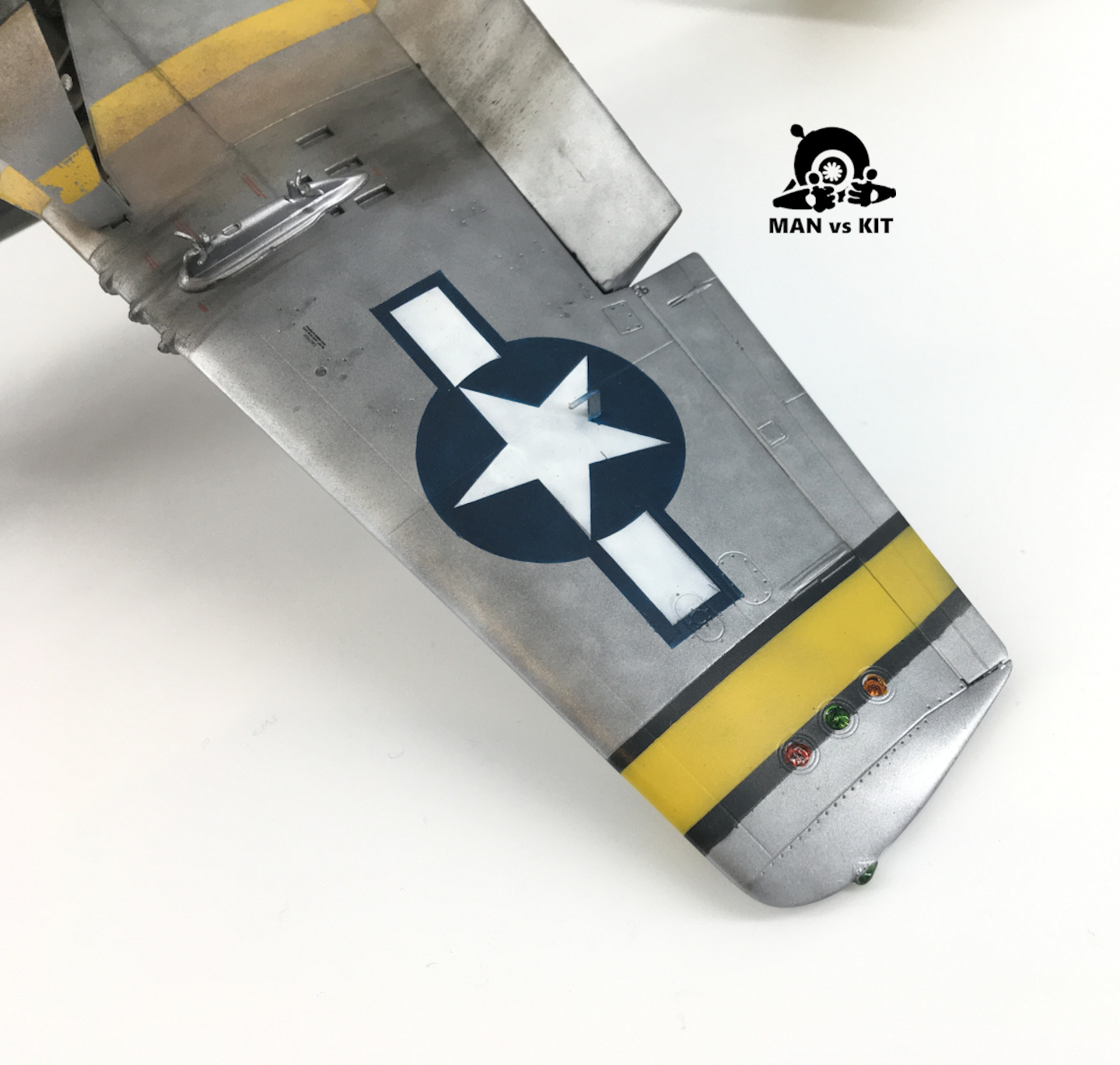 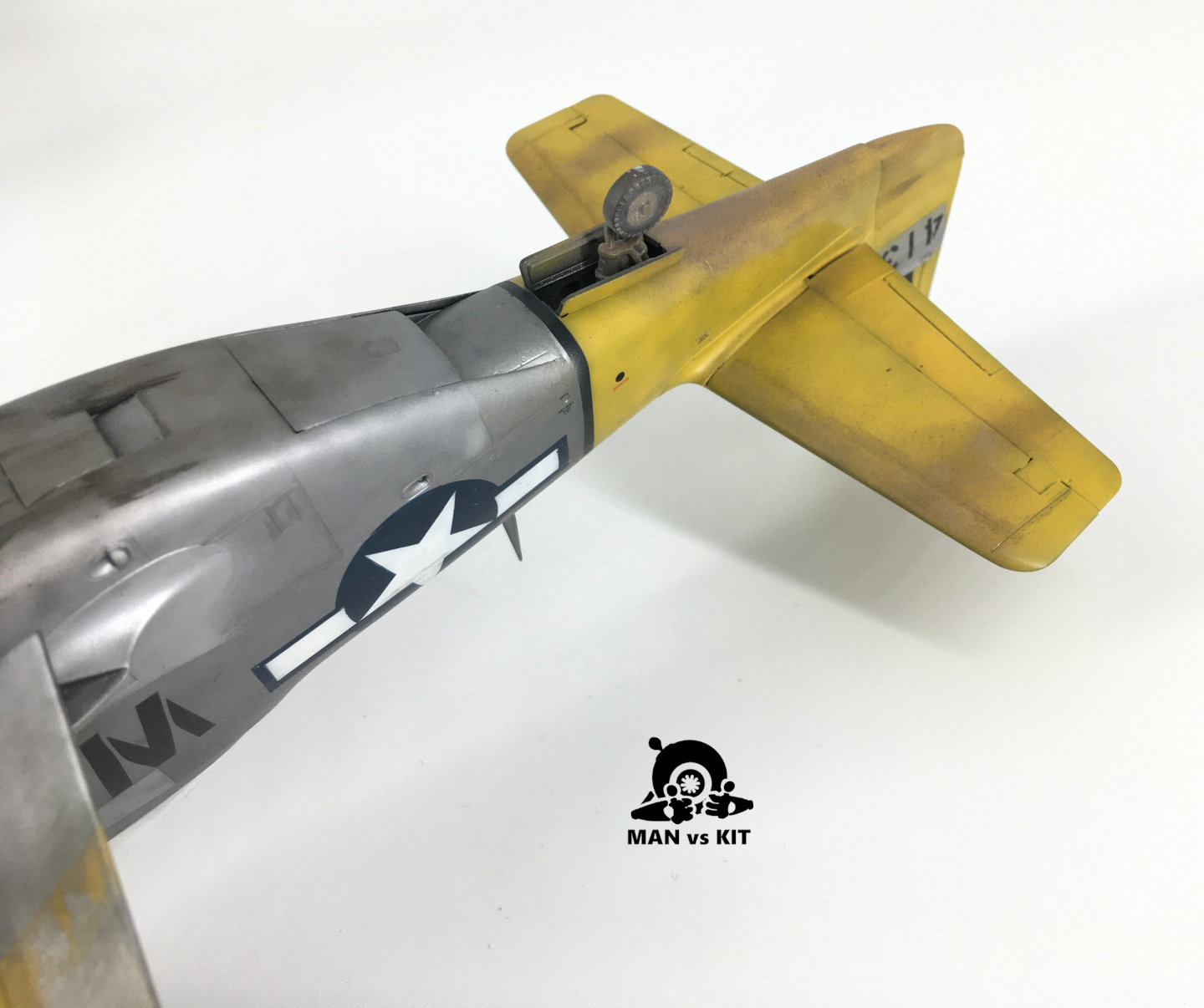 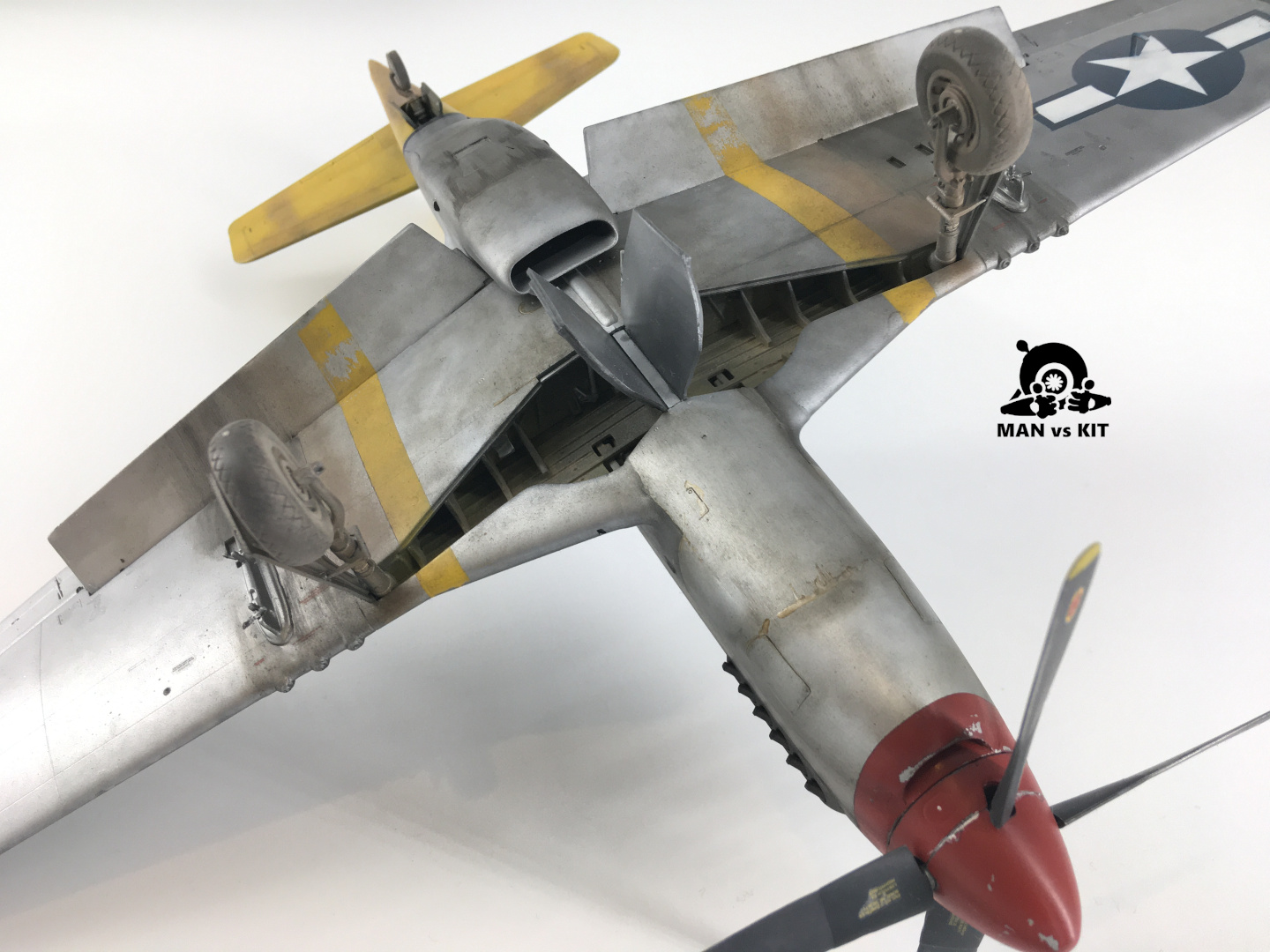 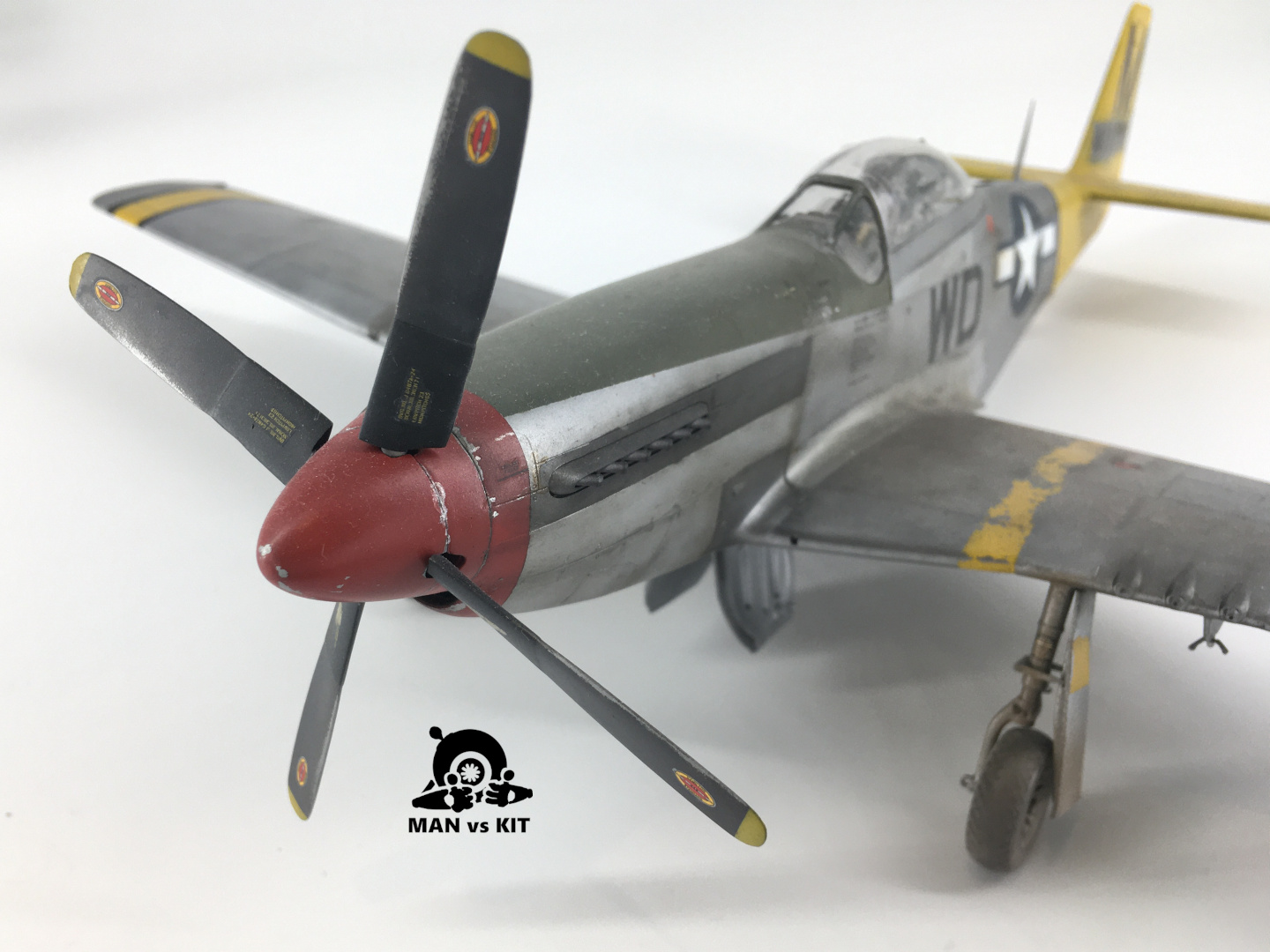 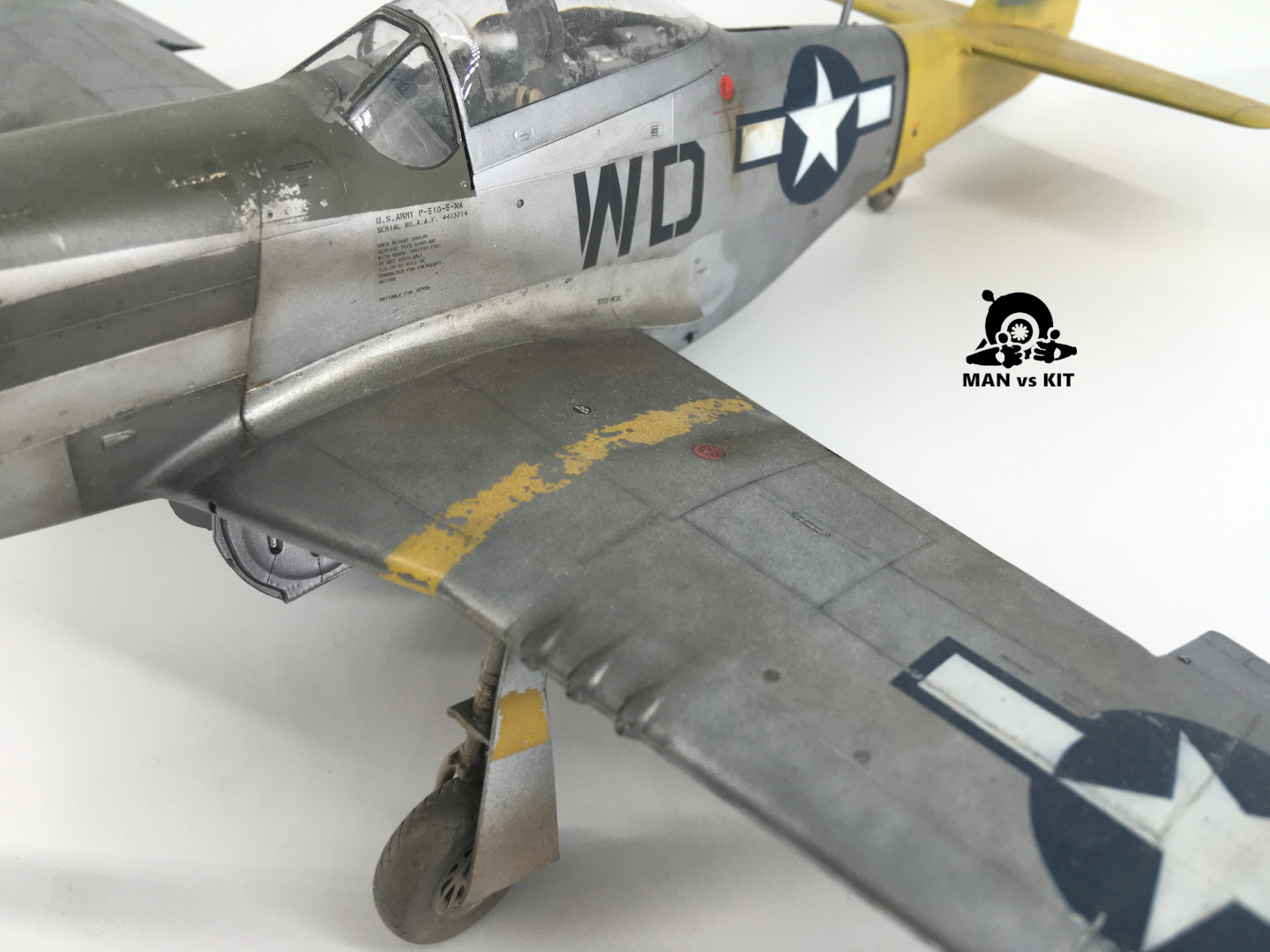 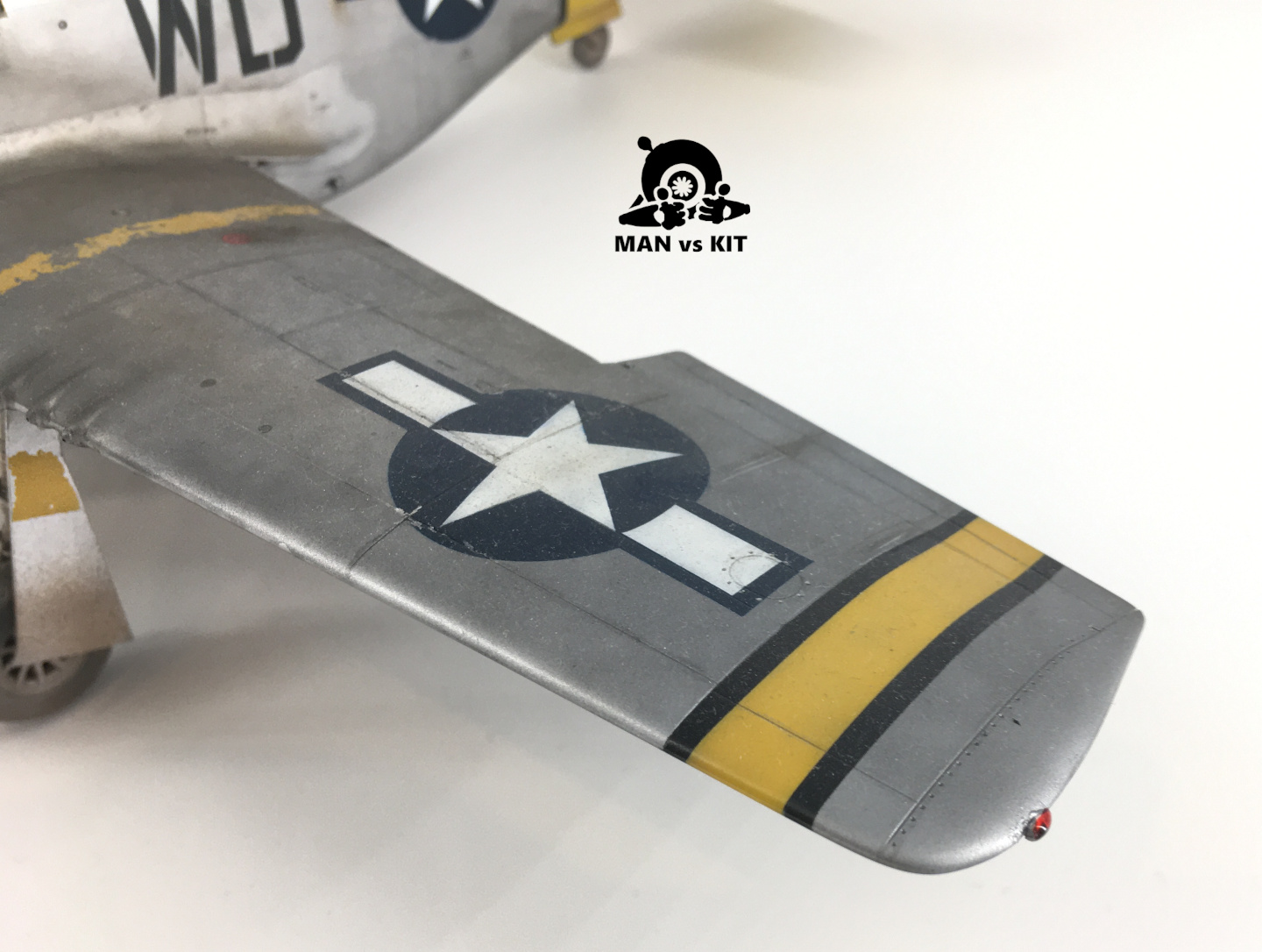