Following my in-box review, here are my thoughts after building the cockpit and some fuselage elements.  So far, I’m really enjoying it.  I’ve found things that I like, things that I found a bit ominous, and some silly mistakes which I point out below.

A quick note: I know reviewers often say, “I did this but that’s not what the instructions say”.  I’m not doing that: I grew up in Switzerland and I will be following the instructions, and letting you know afterwards if there are steps that don’t work.  I think Cool Runnings said it best: 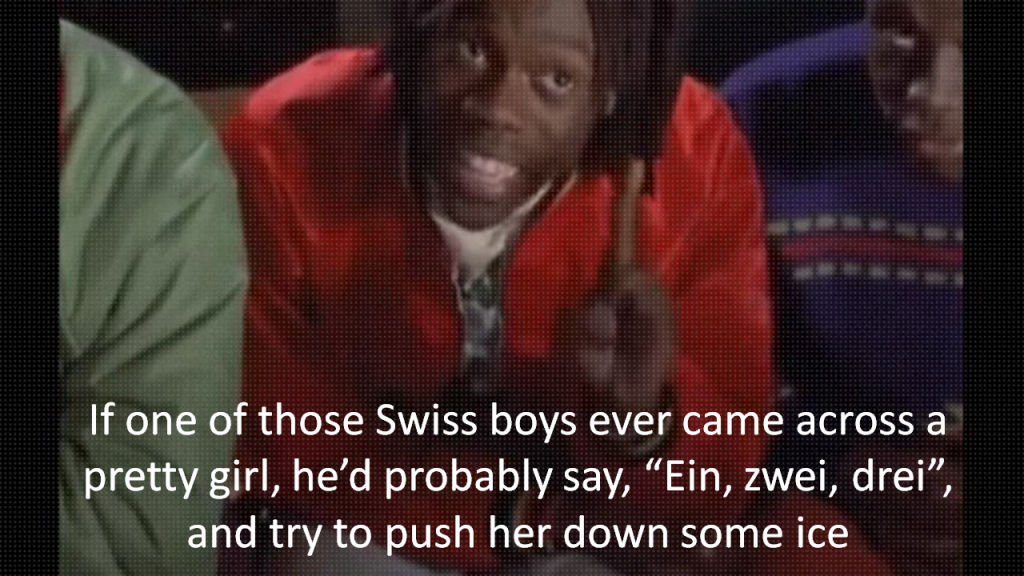 The cockpit consists of a very complete ejection seat, cockpit tub assembled in a kind of box fashion, and the instrument panels.

The seat is very complicated, as the seat base, back, ejection rails, choice of cushions, gas bottle, miscellaneous tubes, seat base sides, and ejection pull handle are each moulded separately in plastic.  Phew!  Then, you get four parts of photo-etch seat belt to drape over it. 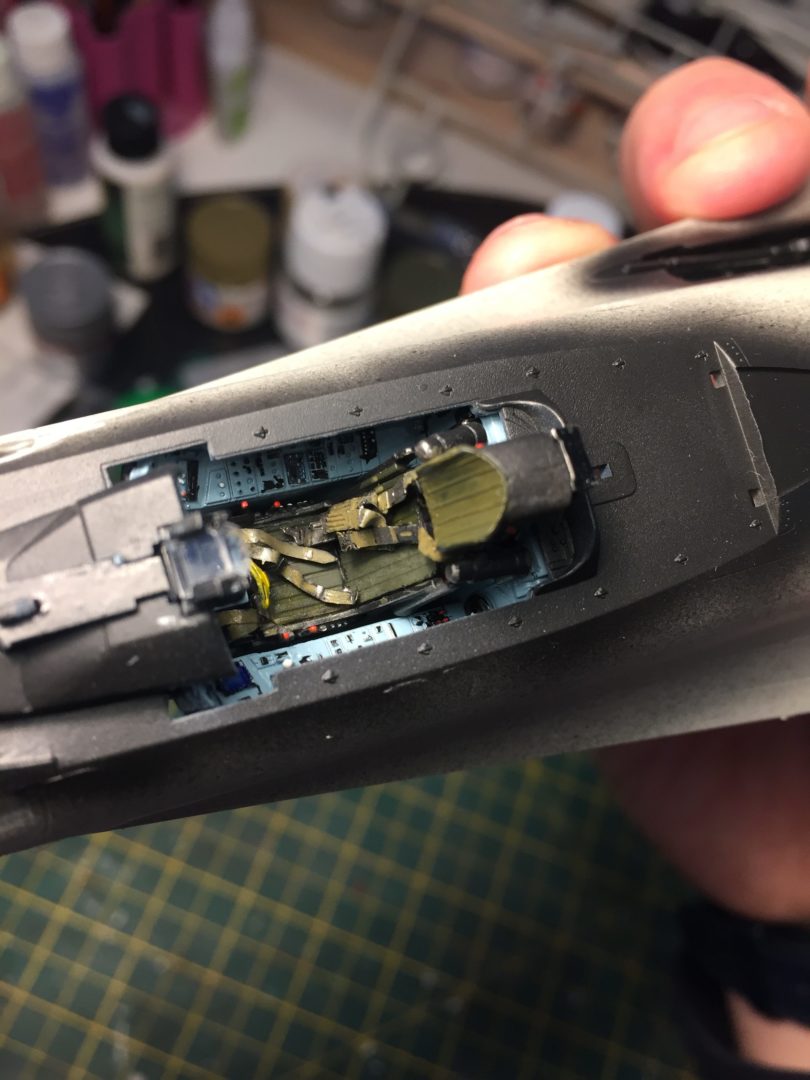 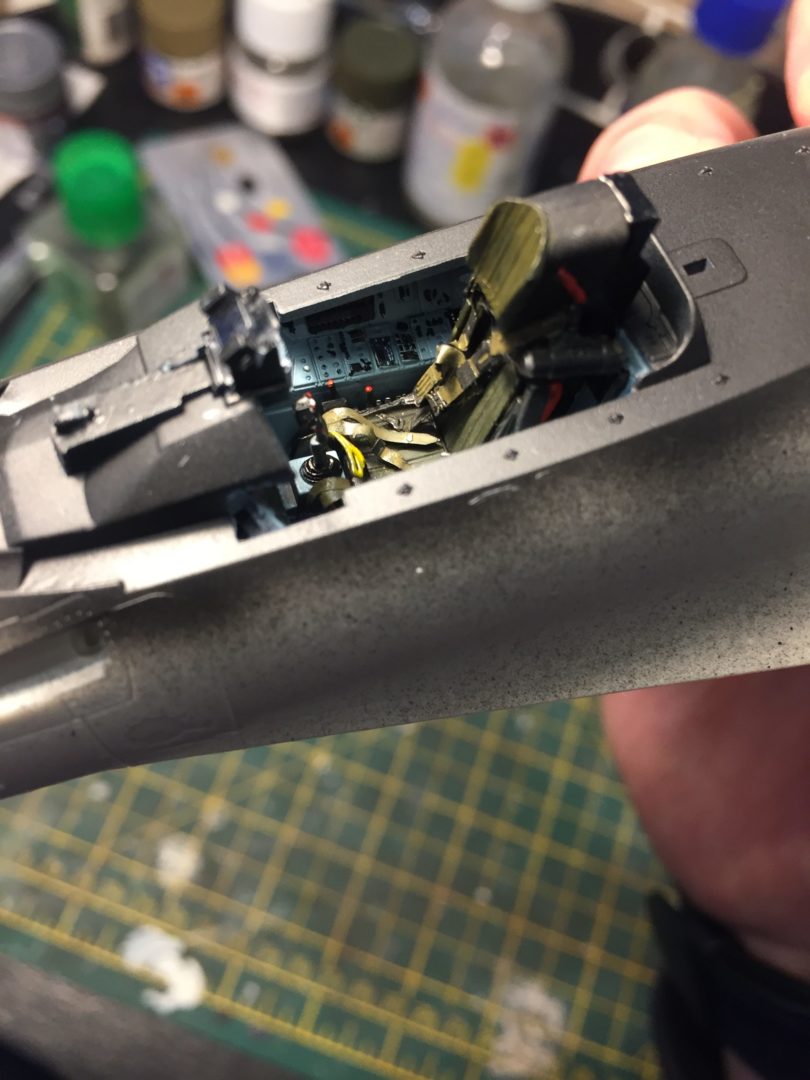 Here’s the first point on which I will probably disagree with other reviewers: I really appreciated this seat.  I know that a lot of people would prefer to swap in an aftermarket resin seat, which will probably capture more detail in maybe three or four pieces.  Yes, I’ve used a few resin seats in the past, and yes, they always look great, but I would prefer not to.  The thing is, that in a lot of kits I’ve built, the kit plastic seats are too simplistic to ever look right, so I feel obliged to swap them out.  This one looks nice enough and while it is a lot of parts… I enjoy sticking plastic together.  For me, that’s a key enjoyment factor in the hobby. 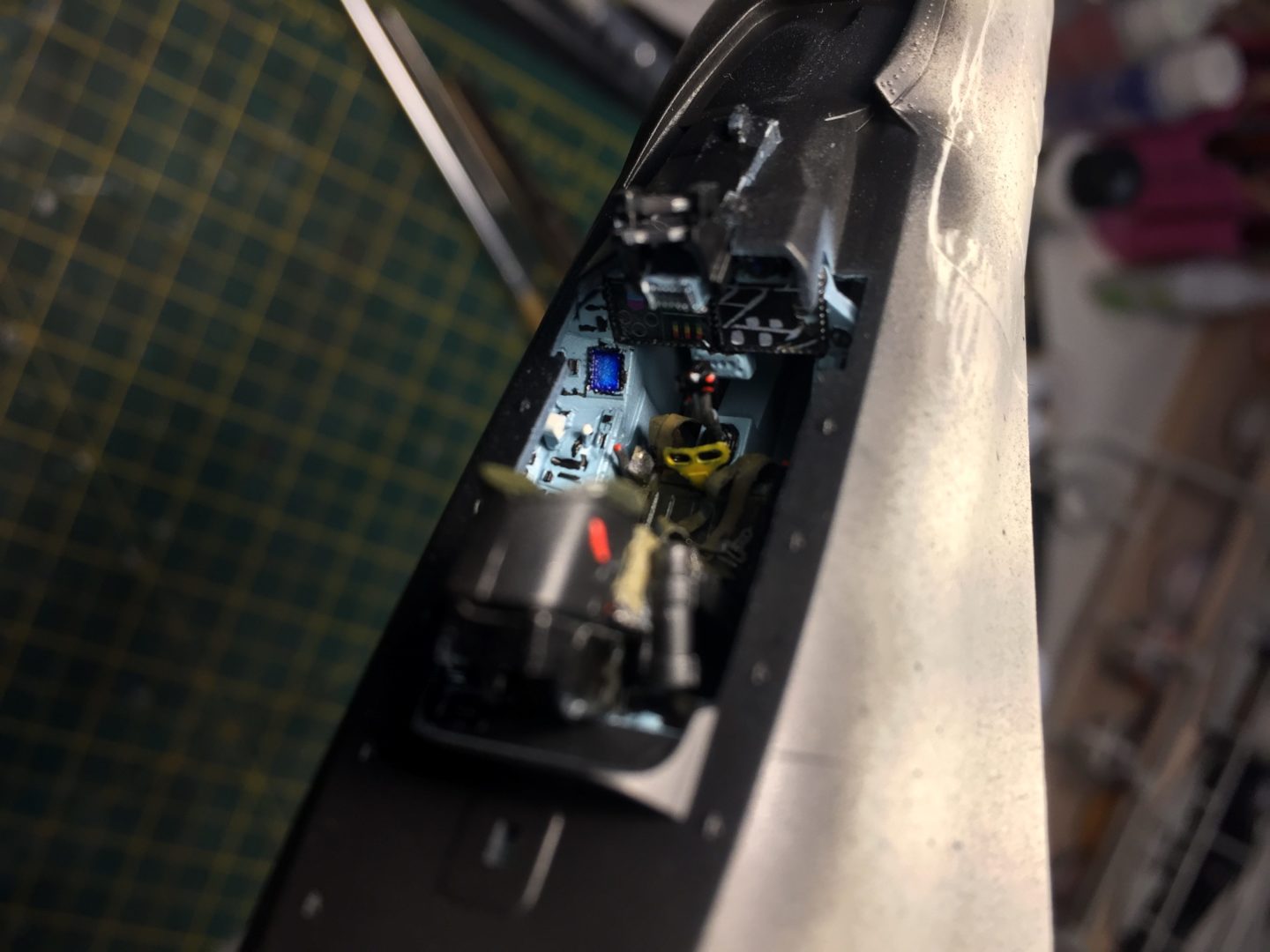 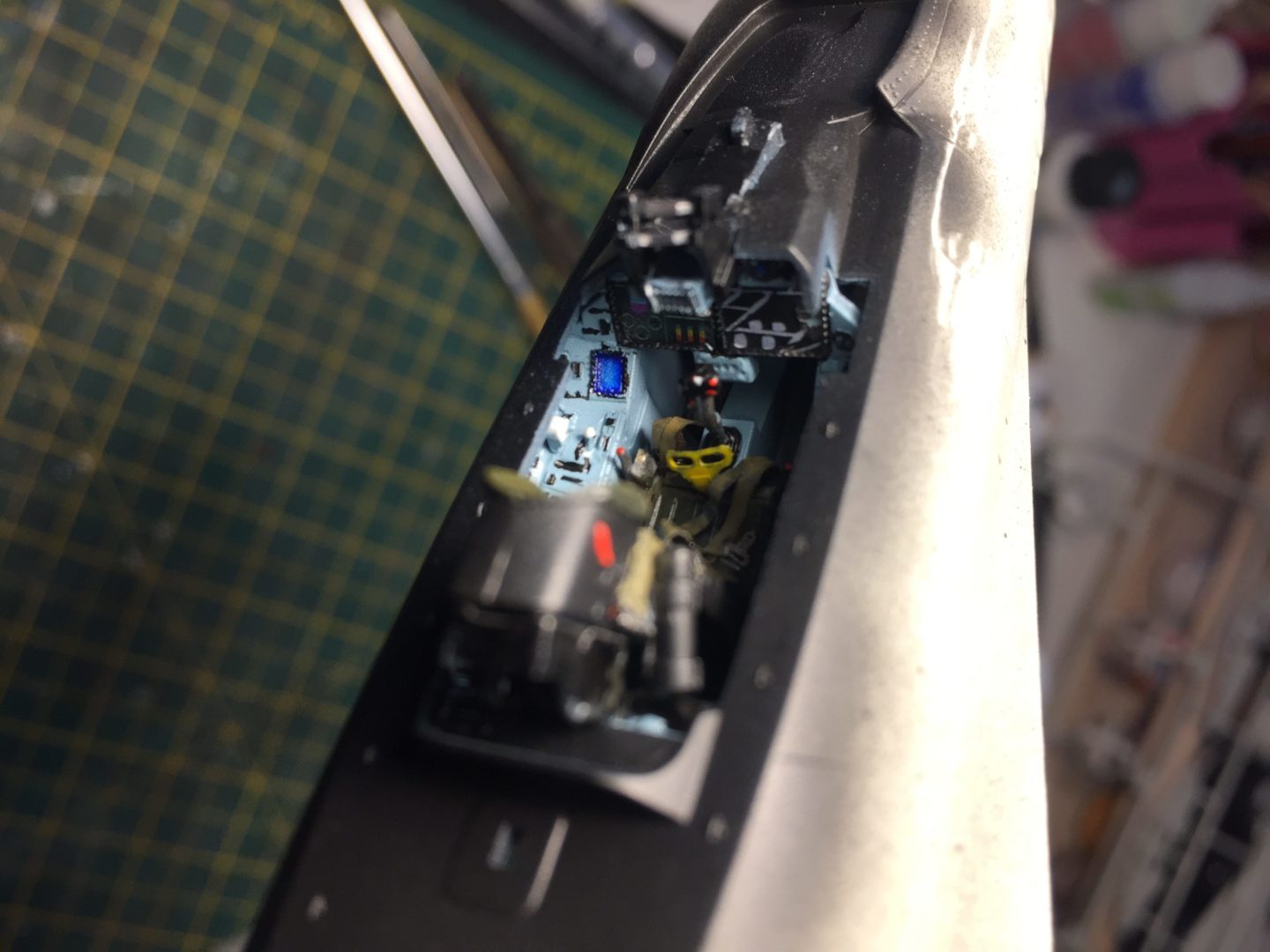 Then we start on the cockpit tub, and here things start looking a bit odd.  I can’t think of another kit I’ve built where I had to stick the walls onto the floor like this: it’s a floor with locating point for the seat and raised mount for the control column, then the four walls slot into the sides.  It wasn’t much trouble though, and fortunately the tongue and groove system to locate the walls is positive and snug.  One advantage to the separate walls is that by leaving the rear wall off, I had better access to the interior when painting.  Oddly, despite the simpler moulding created by the separate walls, the array of buttons on each side is presented as a separate piece.  Perhaps this makes sense if you wanted to use the instrument panel decals? 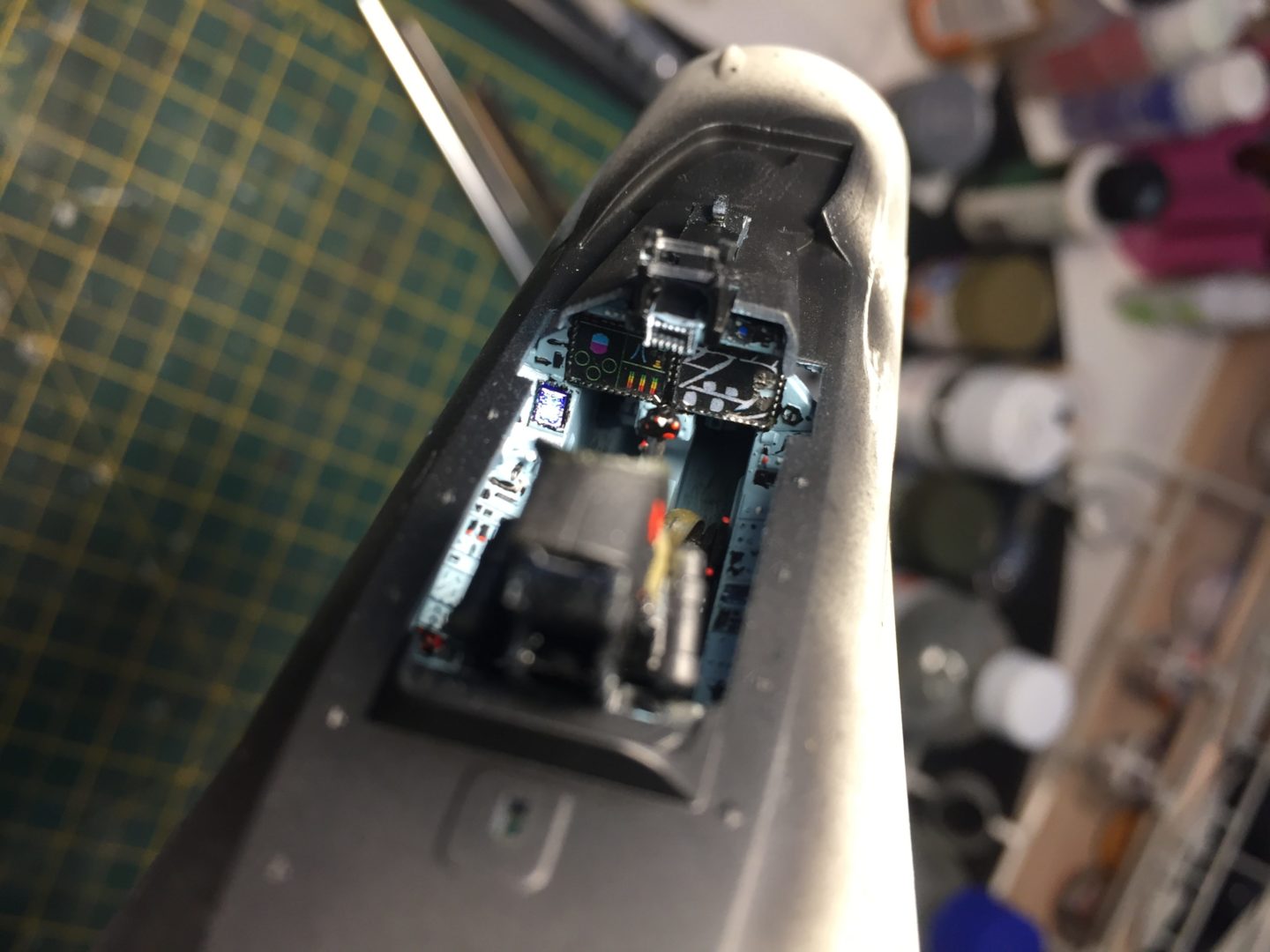 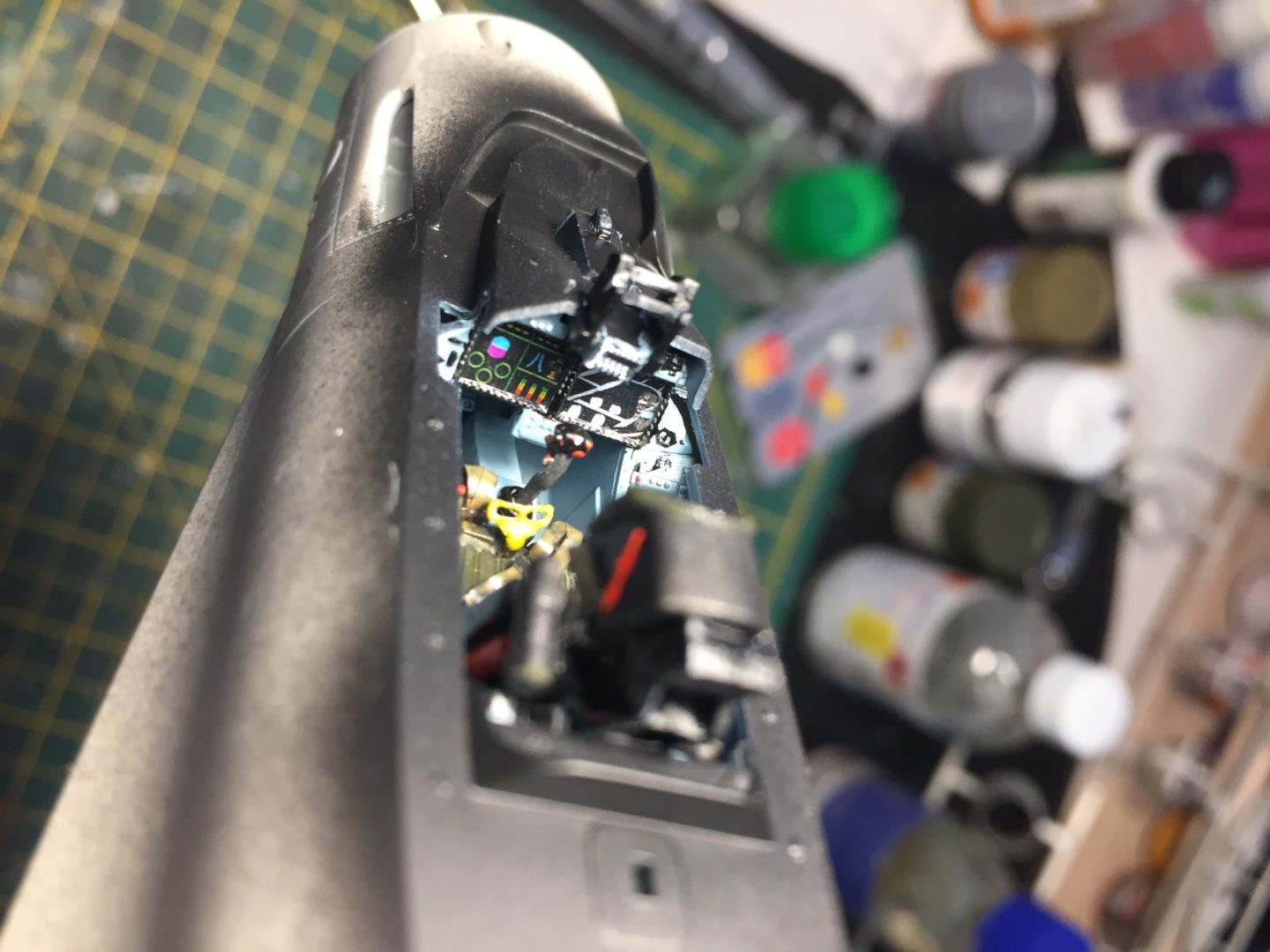 The front of the cockpit tub includes a downward protrusion which looks like it is designed to locate in the bottom of the fuselage.  It’s a fair way from either the landing gear bay or the radar, so it’s not for either of them.  This piece is slightly bevelled, possibly to help it seat.  If so, it’s bevelled the wrong way.  On mine, it appears to be preventing the fuselage closing properly, so I took a pair of side cutters to the offending area.  The plastic is really soft, which makes this kind of surgery easy. 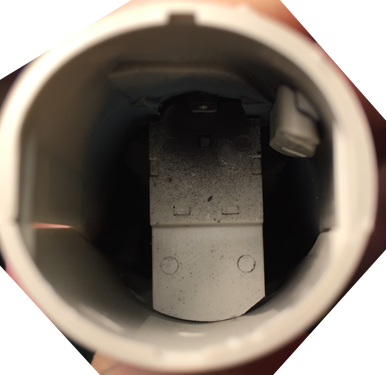 Back to the cockpit, and the next step is to mount the centre of the IP coaming, containing the main instrument panel itself and the HUD mounts.  This area lacks the snug, positive fit I liked in the tub.  It also raised the first silly mistake: the HUD mounts each have a little locating stub.  One side of the coaming has a little hole (which isn’t really a good fit), but the other side is blank.  Side cutters, snip off the nub, try to line up by eye.  Oh, there’s also an enormous sink hole on the side of the part, but it’s not visible once in place. 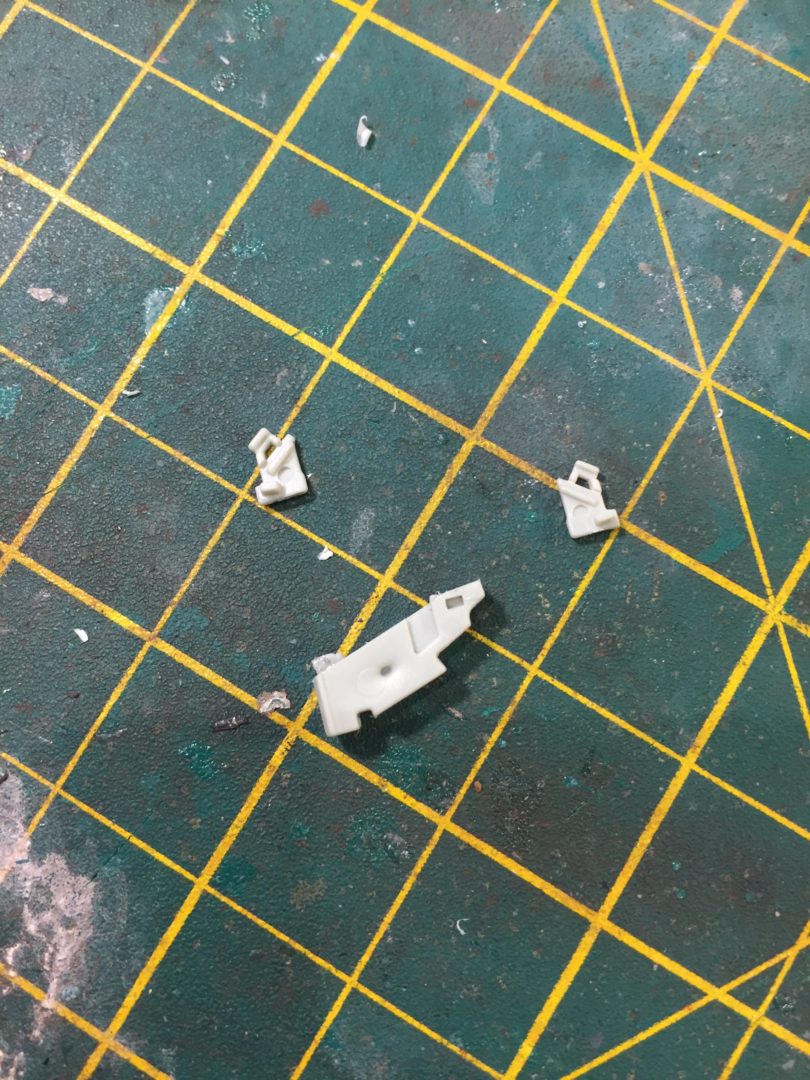 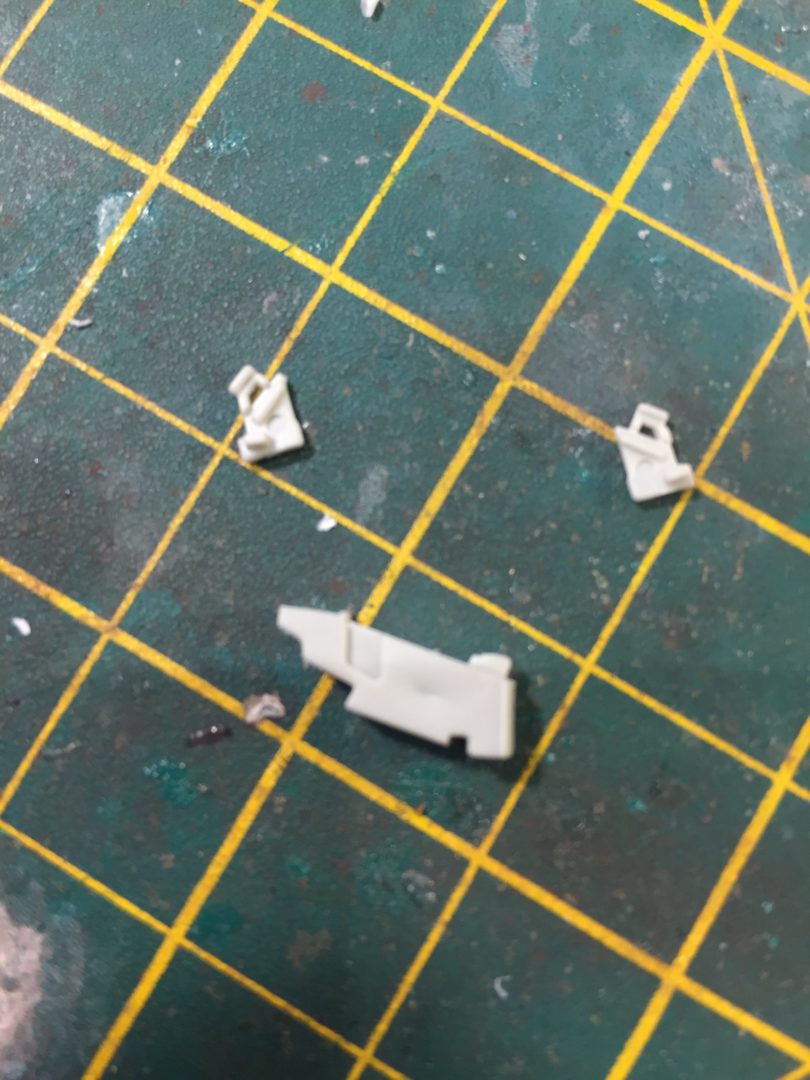 Now to mount the cockpit, which requires threading the seat and HUD through the slots provided.  These are a great fit.  Getting them through is hard, but they sit perfectly once in place.  Given the shape of the seat rail, I would suggest leaving off the seat and rail until the cockpit is in place.  Once in place, the cockpit doesn’t quite want to hold in place against the fuselage: not its fault I think, it’s sitting against an open curve with nothing to cling onto.  A fair bit of TET, some pressure, and it set snugly. 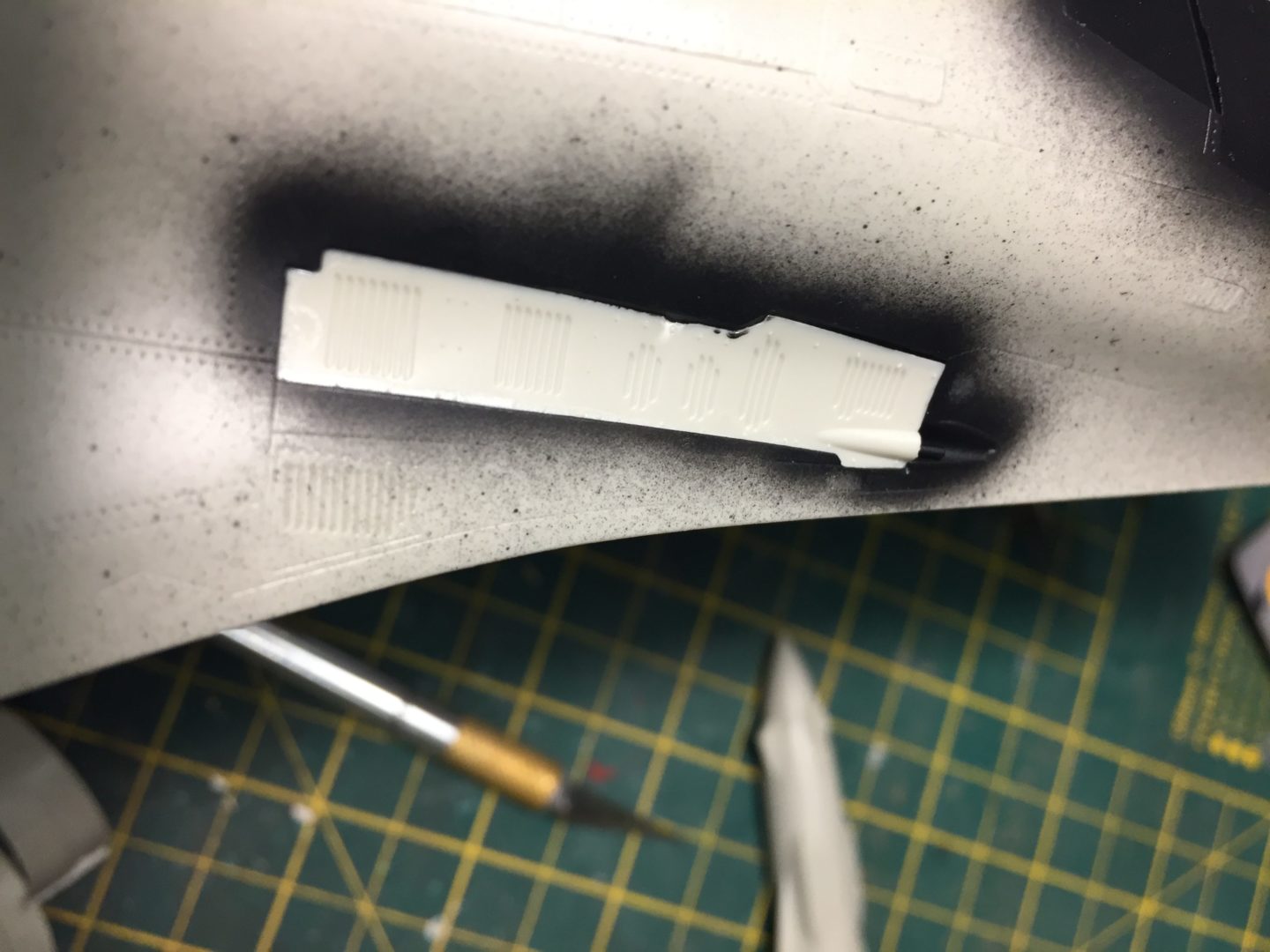 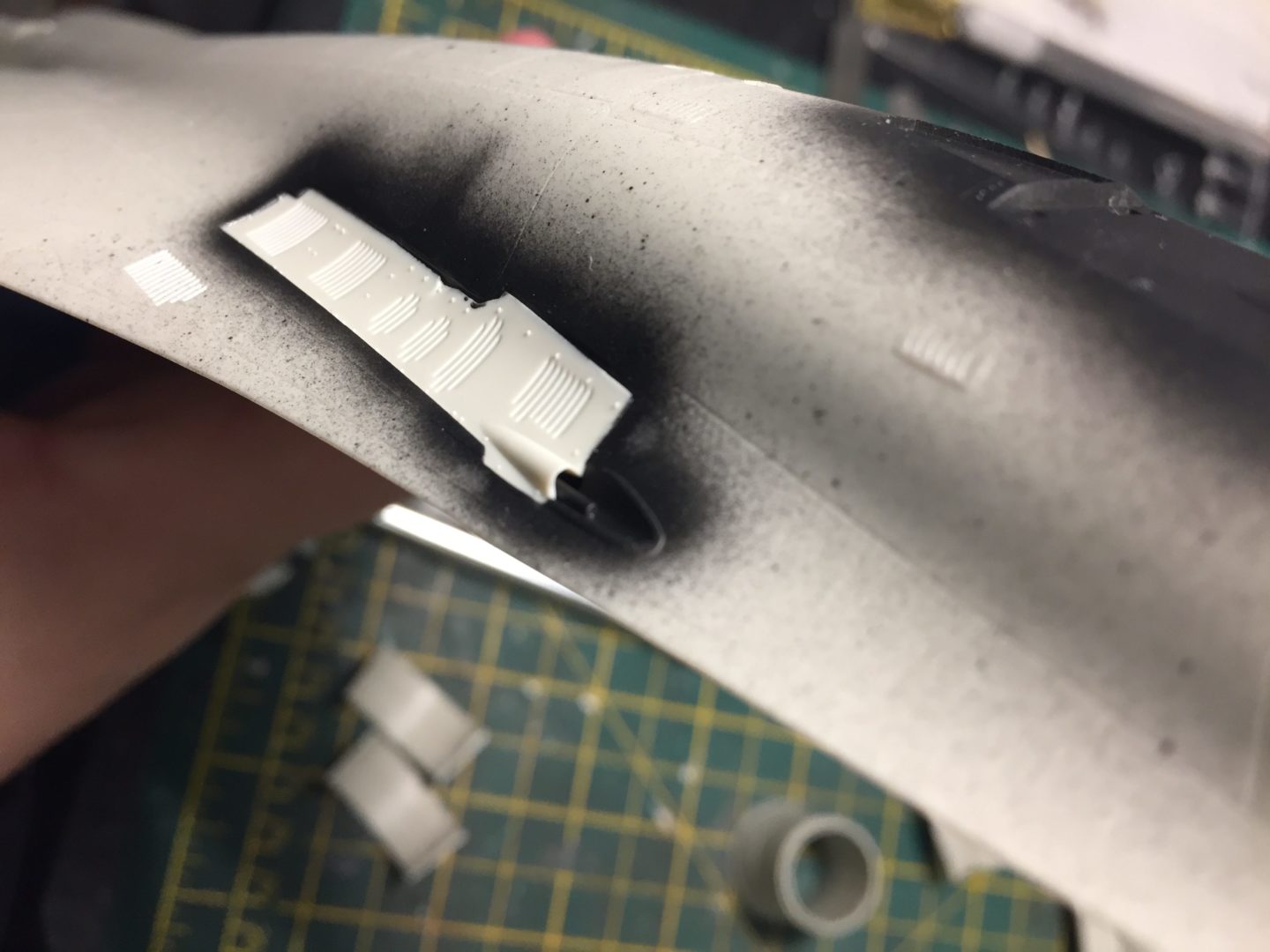 I’m not a fan of instrument panel decals, because I just don’t think they ever snug down enough to look right.  However, I did cut out the larger panels and stick them on, and I like the effect (though the one that goes right under the HUD was a bit out of register).  A glassy effect was created with some “Micro Krystal Klear” – a kind of glossy PVA I think – thinned in water.  Finally, I slotted the HUD transparencies into place and secured with TET.

Next comes the cannon.  The bay is designed to be posed open, with a nice replica of the cannon inside.  I’m planning on having mine buttoned up, but the barrel protrudes so I stuck the cannon in, drilled out the barrel end, and primered it up.  The bay cover is nice and thin.  Unfortunately, the slot for it to sit in is a bit deep, and it is noticeably recessed once in place.  I’m just going to live with it. 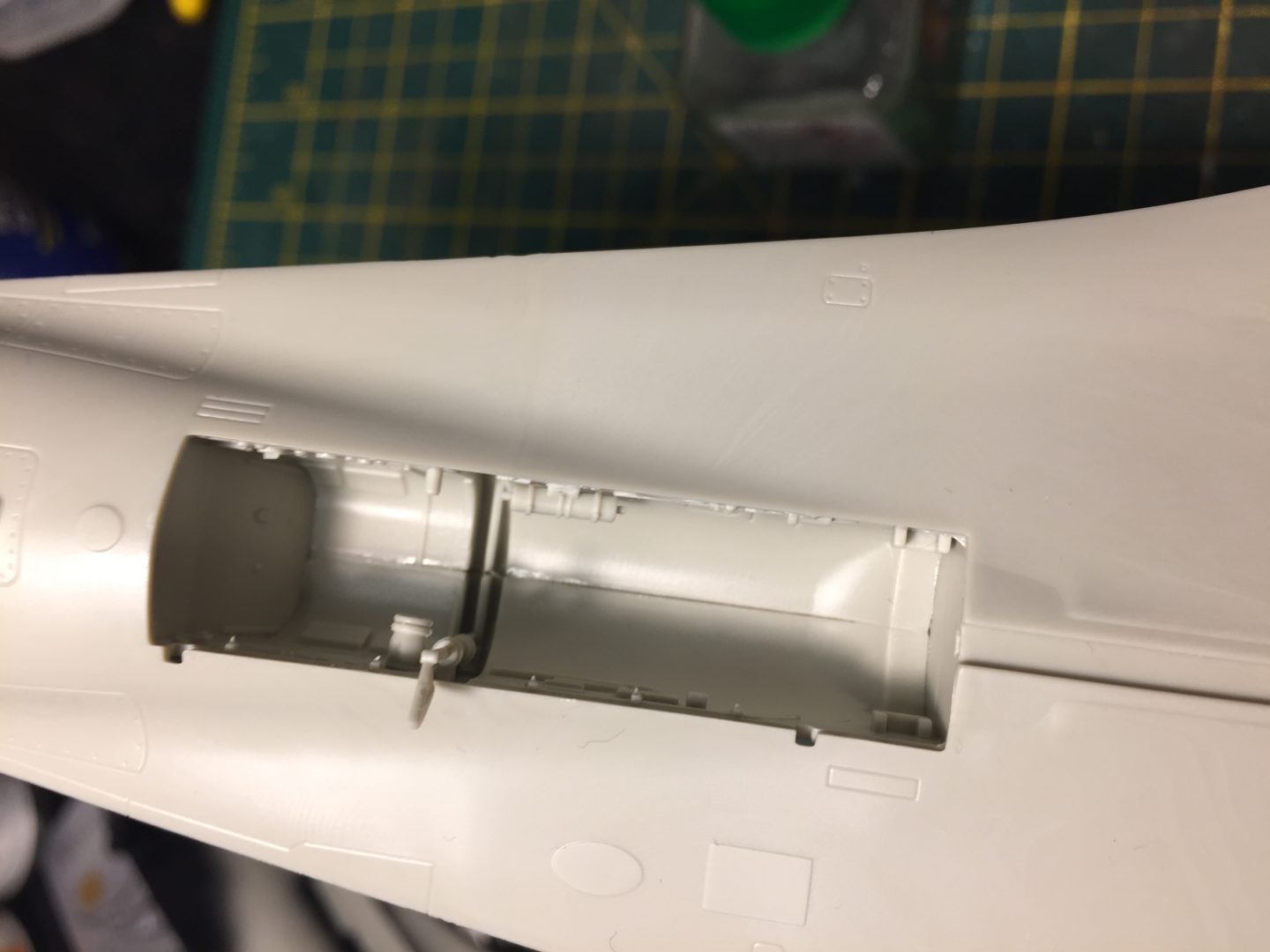 Finally for today, the landing gear bays.  First, the forward bay.  This is a four piece assembly that goes together quite well (including an interesting way of holding the two side parts together: it’s a kind of vertical slot system).  I only really have one gripe here, and that’s that the two sides leave quite a prominent seam down the middle.  I mean, it’s so prominent that even I’m thinking of fixing it.  I just think that this could have been avoided by use of a one-piece bay, or if that were too complicated, moulding a separate floor. 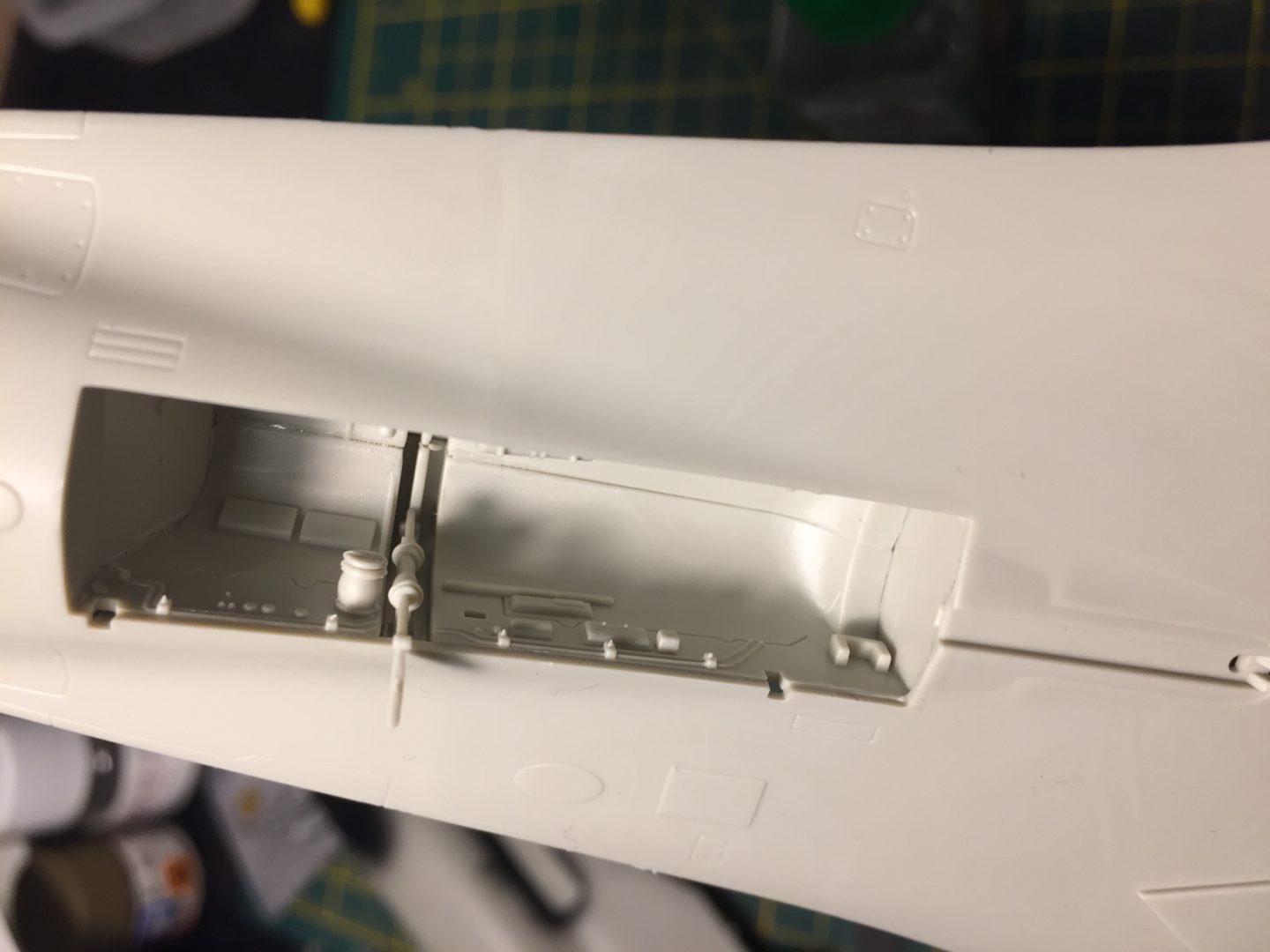 I know you’re thinking I’ve gone mad, but bear with me.  The problem here is the curve in the floor, and that could have easily been moulded as a “floor section”, giving a smooth visible part.  You still need to join the sides on, but they could be given a positive attachment out of the eyeline and a join closer to 90 degrees is easier to avoid having a prominent seam on.

A point I would like to bring up here is that throughout the build so far, there have been areas where the locating tabs are the wrong shape or just a bit flat.  What’s interesting is that the locating slots are consistently crisp and deep.  That’s really strange.

The main landing gear bays are another case of joining the walls together.  They fit fine, and slot easily into the fuselage.  A bit of test fitting suggests that they should also fit well into the upper fuselage when the two are joined. 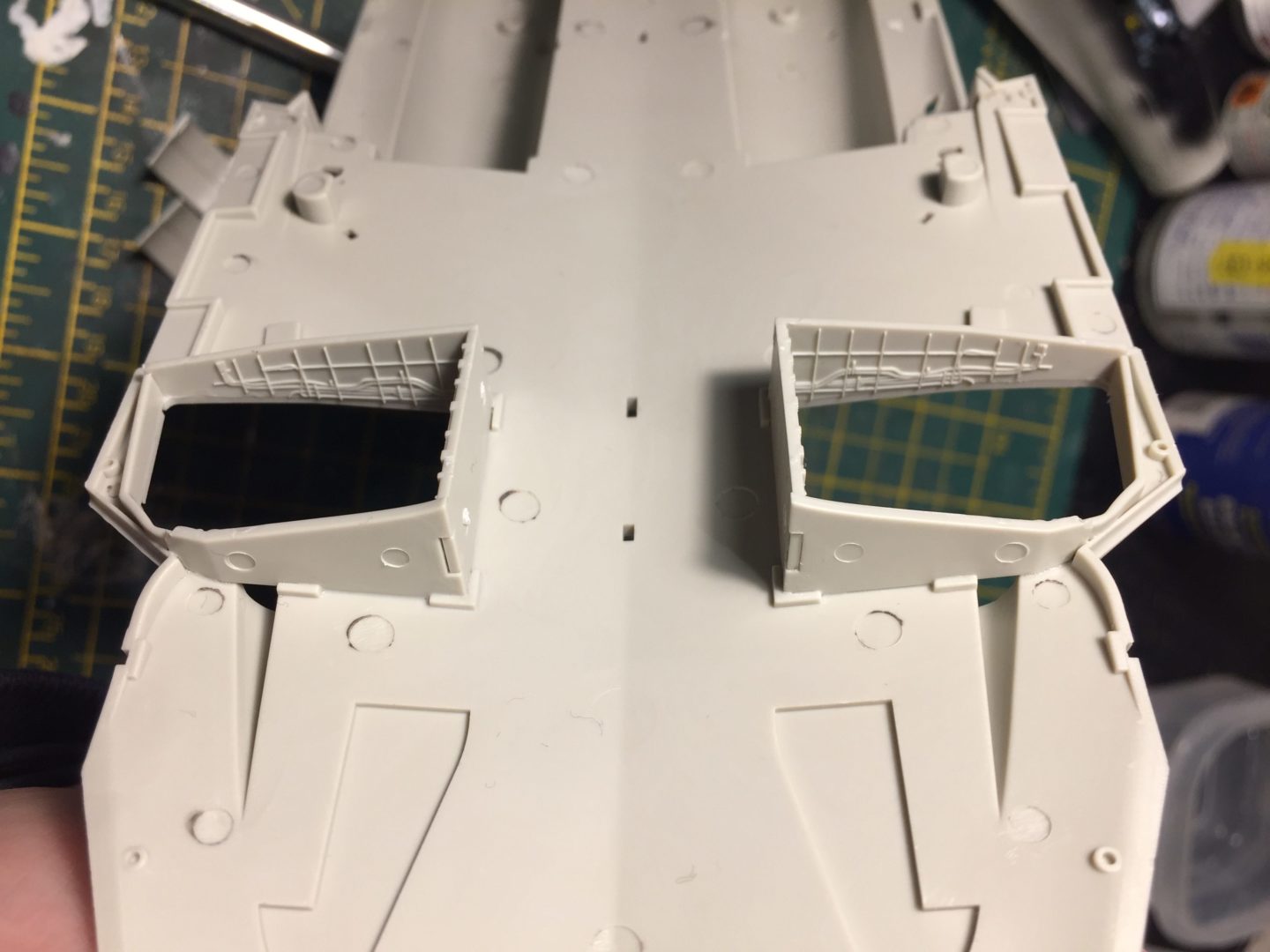 A really strange point here: I don’t know whether I was going loopy from TET fumes, but I carefully checked the part numbers to the fuselage sides as shown, and laid them on the appropriate side as I removed them.  But they were the wrong way around.  Please let me know if you encounter the same issue, or indeed if you don’t.

I just have to raise this: what is it with modern moulding and ejection stubs?  We always used to get these hollow, kind of outlines of where the ejector pin had gone, but they were flash-thin.  This is the second new kit I’ve built (after Amusing Hobby’s Conqueror) that has these really solid stubs that have to be removed with side cutters.  It must be something in how they are moulding them.

In conclusion, I’m enjoying this kit so far.  I’m having to take quite a bit of care in ensuring that parts are properly fitting before placing them, but at least the soft plastic makes cleanup easy and they aren’t brittle.  Join me next time for the engines and closing up the fuselage!