Last time we left off having assembled the cockpit and built the landing gear bays.  This entry will deal with the fuselage: closing it up, assembling the engines, and the landing gear itself.  The next entry will cover the wings and weaponry, and then we’ll do a final write-up on the completed build.

Unlike some Kitty Hawk offerings, this one doesn’t provide full engines.  That’s probably a good idea, as from other reviews, I’ve got the sense that there is rarely an option to display the engine and they usually cause fit issues.  So far as I can tell, that’s an issue across manufacturers when it comes to jets. 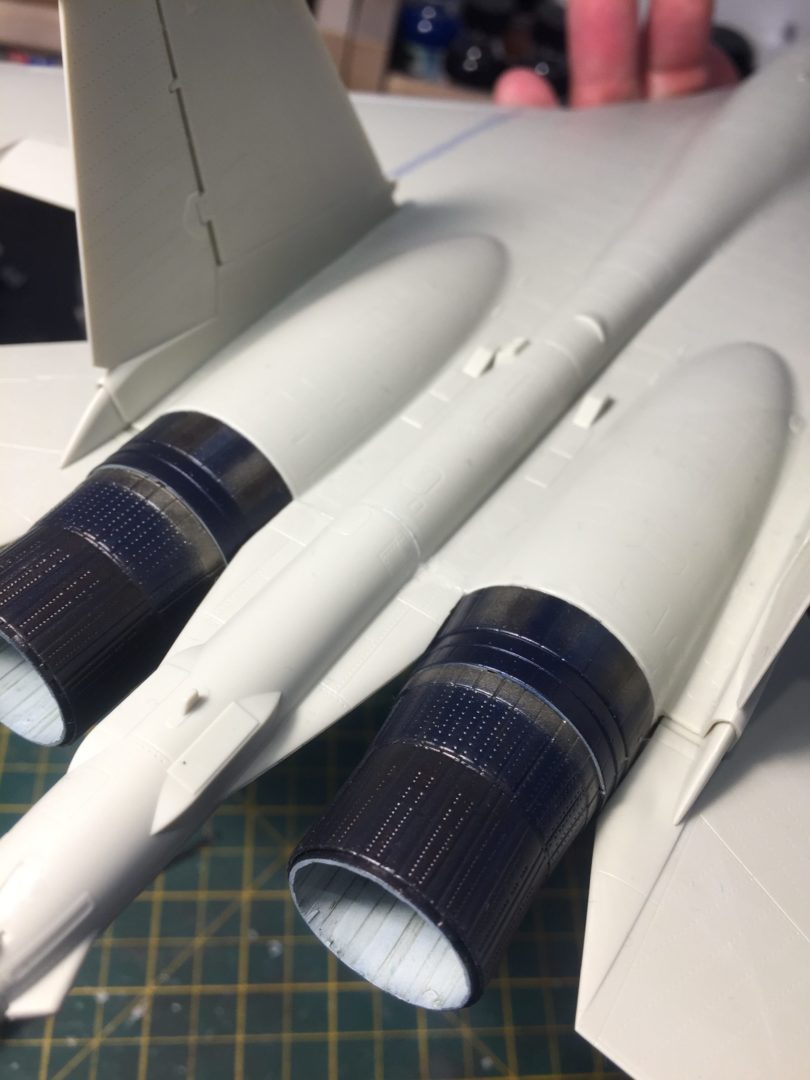 Instead, what you get is a pair of rather nice exhaust nozzles, and the intakes are assembled separately further down the page.  As has been extensively covered elsewhere, the Su-35 has a thrust vectoring system that causes the nozzles to droop when the engines are switched off, and this isn’t available in this kit.  It is available in the PLAAF special edition, but the extra nozzles are a resin casting which just screams “oops”. 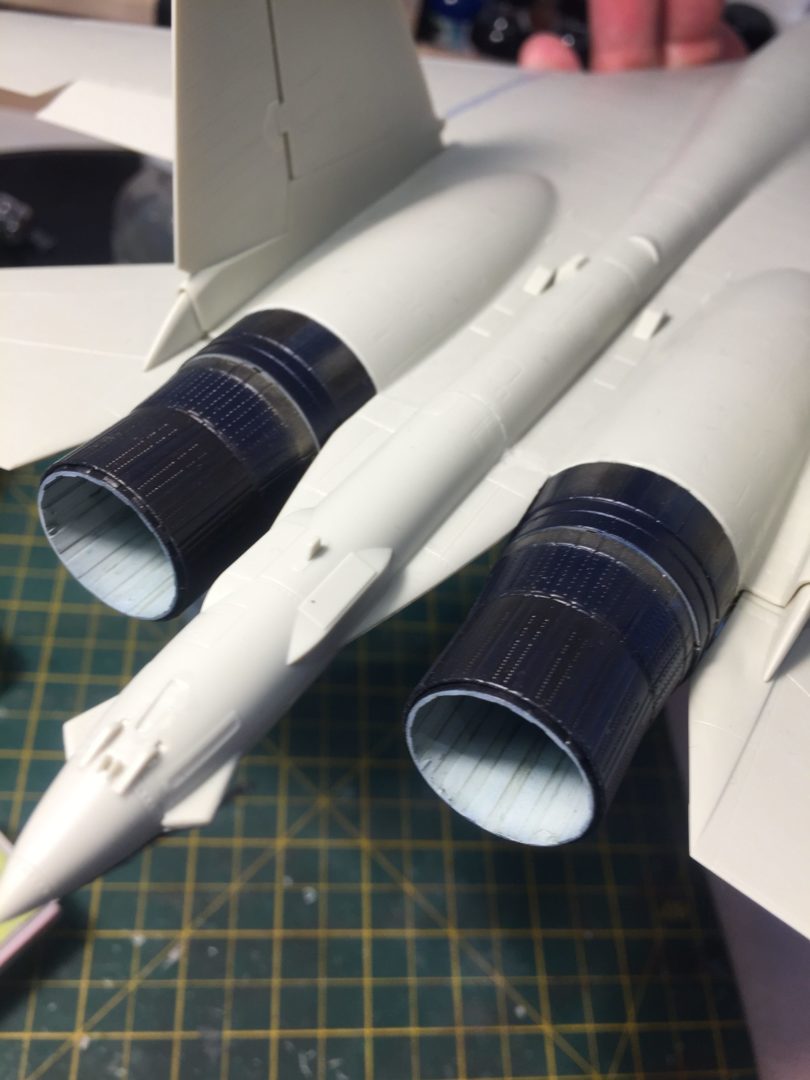 As far as I’m concerned, the pilot got out of mine but left the key in the ignition or whatever it is you do to leave a jet running on the ground.  And I’m closing the canopy, so he must have locked himself out afterwards.  Ah, Russia. 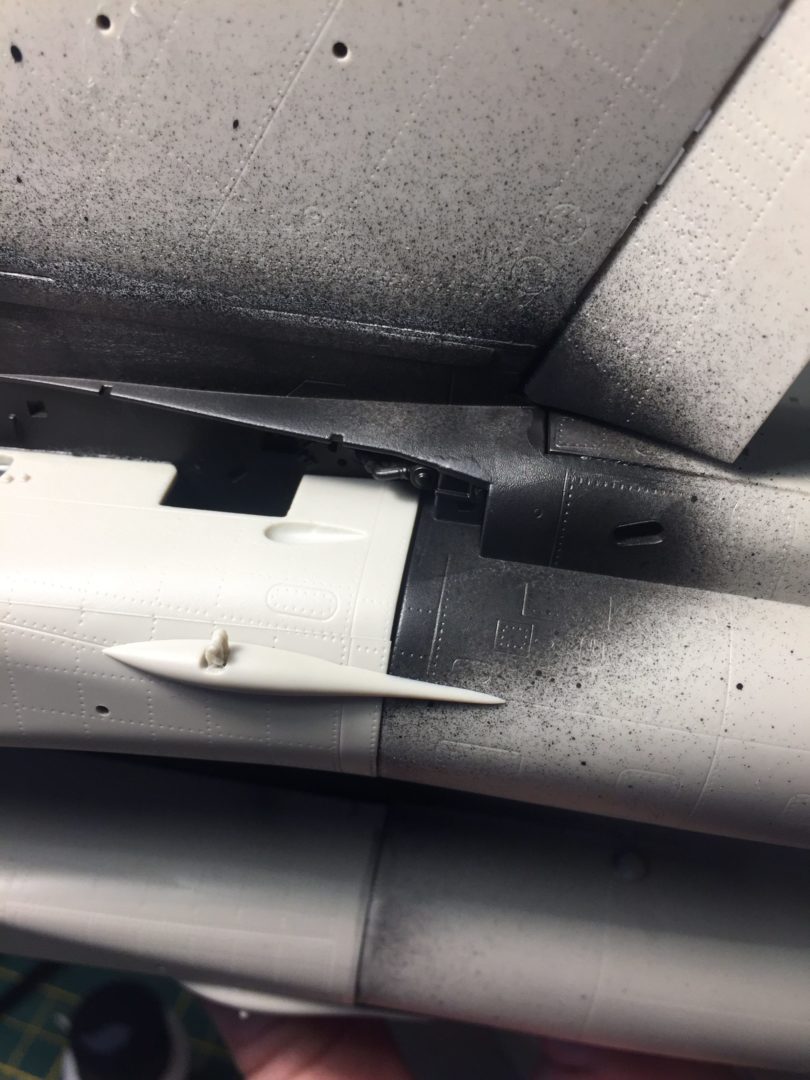 Each engine is comprised of a two-part tunnel into which slot the engine fan and afterburner injector ring, then the funny double layered nozzles are reproduced with two parts where one slots inside the other.  It’s a very good fit and I don’t remember actually gluing them.  These attach to the end of the tunnel, and the outer casing lays over the top.  I found it was a touch too short to properly connect, which was annoying. 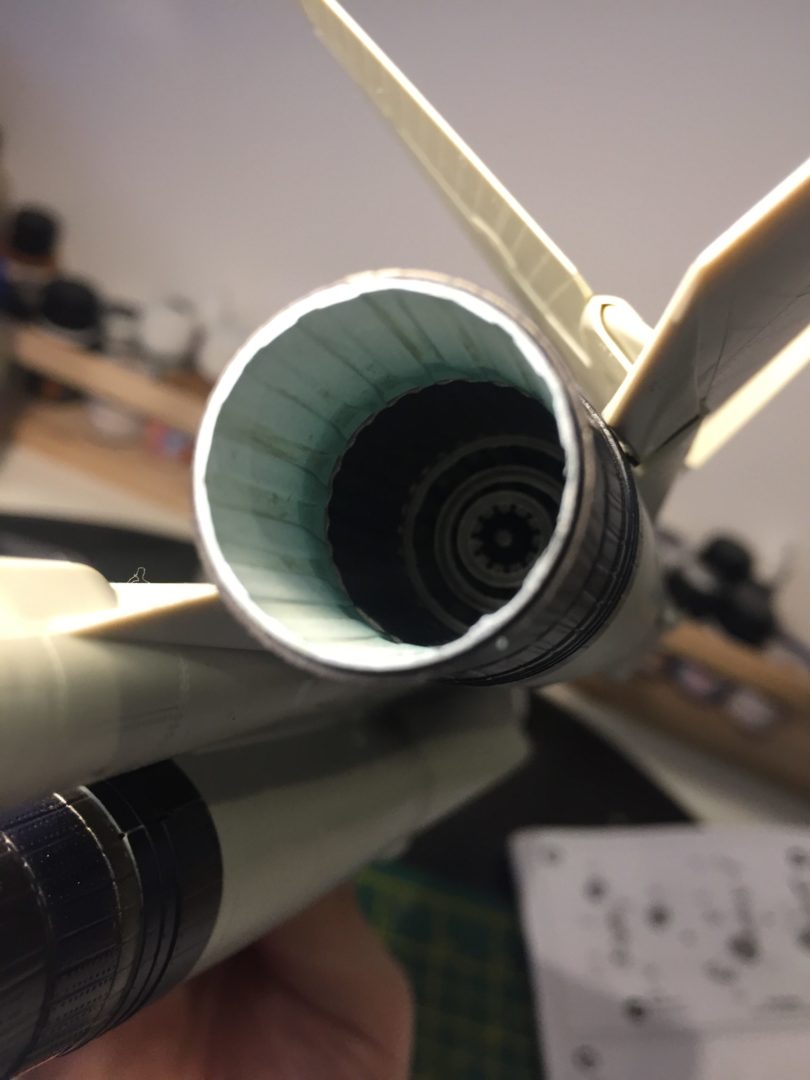 The exhaust locates inside the fuselage with a pin and ring which works.

The jet intakes are formed of a flat ceiling and U-shaped tunnel, while the engine fan slots solidly into the lower fuselage proper.  The sides of the intakes also form part of the landing gear bays.

The intake parts themselves all fit together nicely but their fit to the fuselage is less good, with a largish gap on one tunnel.  Also, please note at this point that you really should install C40 and C41 directly into the fuselage now; if you follow the instructions the main gear are impossible to mount.  More on that below. 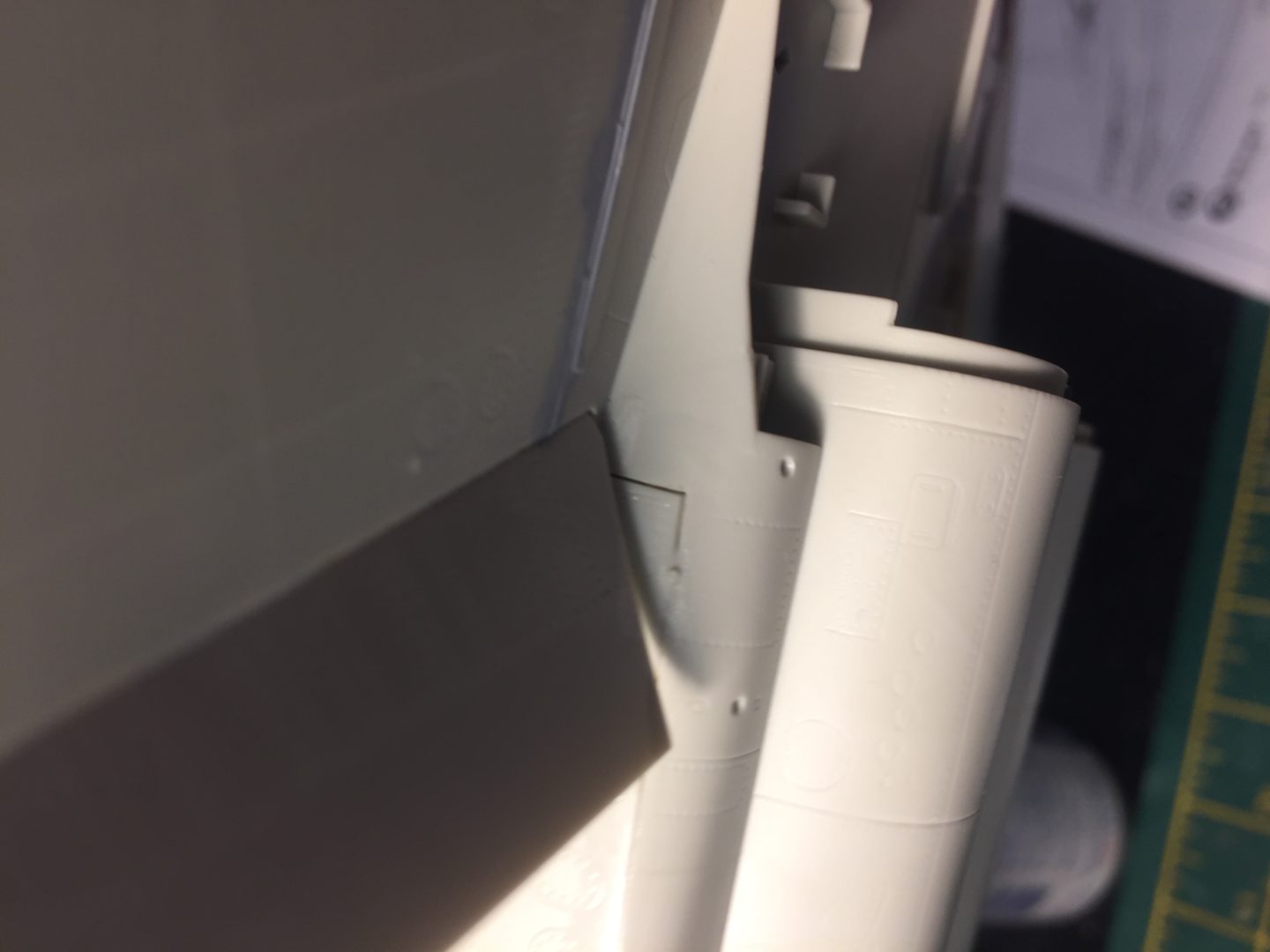 The fuselage halves fit well and I closed them up proceeding nose to tail with plastic weld.  Really felt solid and I was very happy with this step.

Then you fit the radome – I omitted the radar because I wasn’t sure whether it would fit – which is delightfully  devoid of locating pins.  I read one review which stated: “it doesn’t matter because it’s round”, well… it isn’t and indeed it shouldn’t be.  The top is ever so slightly flatter and you can with great difficulty identify which way round it should go. 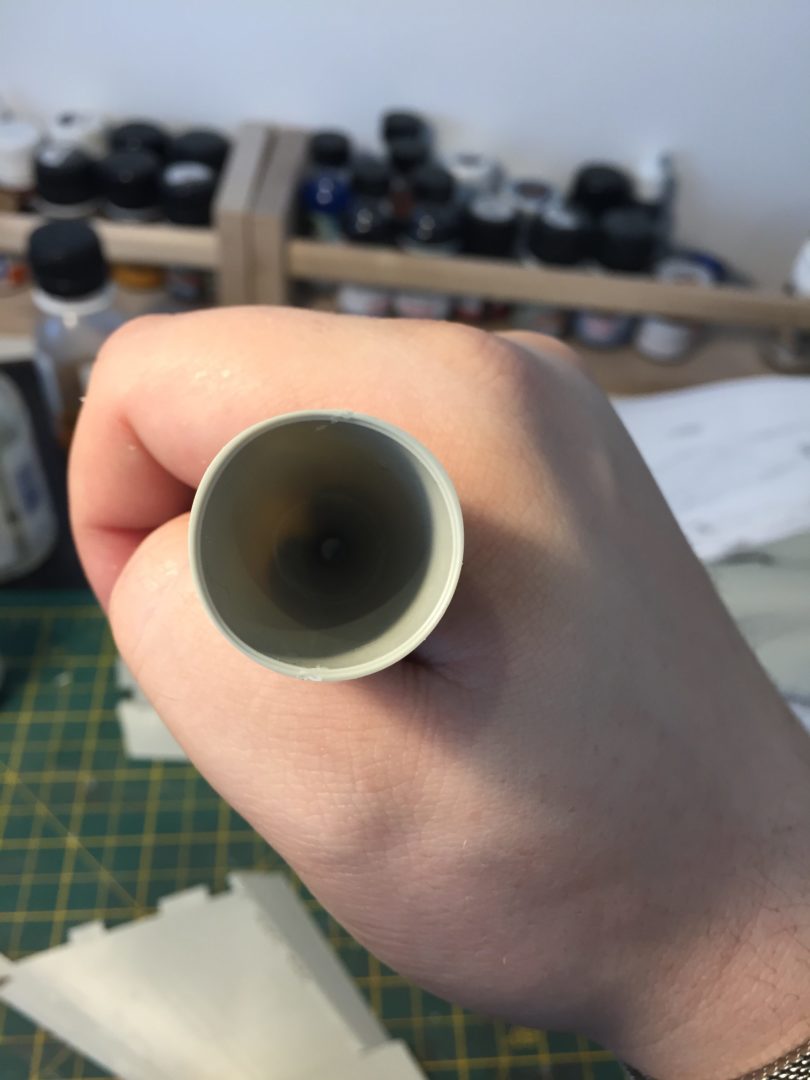 Pro tip, which I sadly learned too late, is that the big longitudinal seam should go straight down the centreline.  It is also meant to be present, but I thought it was a moulding seam and removed it.

Also, this plane does need a fair bit of weight in the nose.  I glued the weight into the main fuselage between the radome and the cockpit wall, because I wasn’t sure how strong the radome join would be.

Also, note that the radome profile doesn’t quite match that of the fuselage. 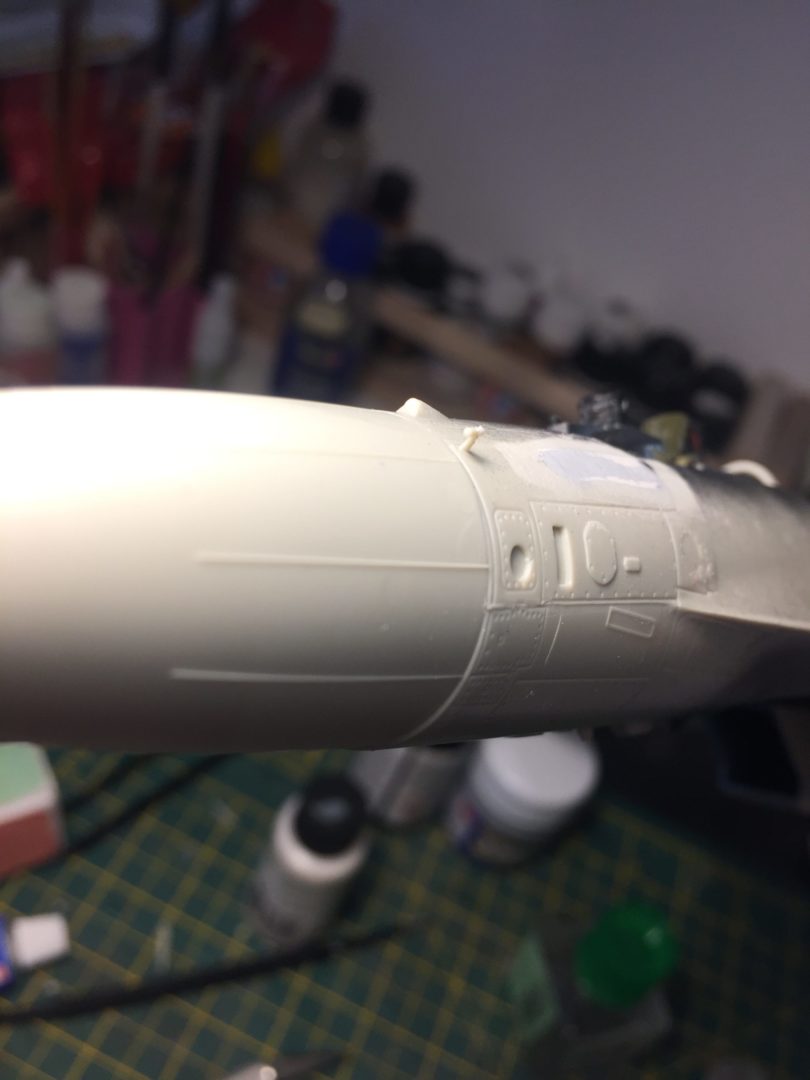 The other end has a large boom which is missing some locating holes, and its fit into the fuselage could be better.

The landing gear appear complex but go together quite easily.  The worst part is the scissor mechanism on the main gear shocks which for no apparent reason are moulded in two parts.  You also get more parts here which lack locating points, or have prominent locating stubs but no holes for them to fit in (such as C47, the nose wheel cage), and as I mentioned above if you follow the instructions the main gear cannot be installed.

Parts C40 and C41 are funny little starfish things that go on the fuselage ends of the main gear.  I guess they’re something to do with the hinging.  They sit inside little boxes which are recessed into the fuselage / intakes, where they are quite snug.  Once build, the solid locating stub on the main gear is too large to allow these to be rotated into place, so you’ll need to fix them first.

Good news however is that the landing gear and bay doors are designed to be easily installed once the rest of the kit is painted, which simplifies the masking.

So far, so good.  Despite an increasing amount of vagueness in how things fit and missing locating holes (always the holes, never the stubs… very odd), the kit has so far gone together reasonably well.  In fact, (and I write this after finishing the build), I was wondering what all the fuss was about: I’d seen some small silly things but nothing major.

The next step changes everything.  Hold on tight for the wings.