As I mentioned at the end of my previous post on the fuselage, so far I had not seen any of the problems Kitty Hawk has a reputation for, and was even wondering whether the stories may have been a tiny bit exaggerated.

Well fear not, I found the lunacy!

The wings are broken down into four main parts: the top half, which contains the ailerons; the bottom half, which slots in toward the wingtips; a full length leading edge flap; and a large training edge flap.

The leading edge one has some interesting moulding choices such as putting the attachment points right on the sharp leading edge.  The fit against the wing is ok, especially since I didn’t do much more that push it into place and stick it with plastic weld. 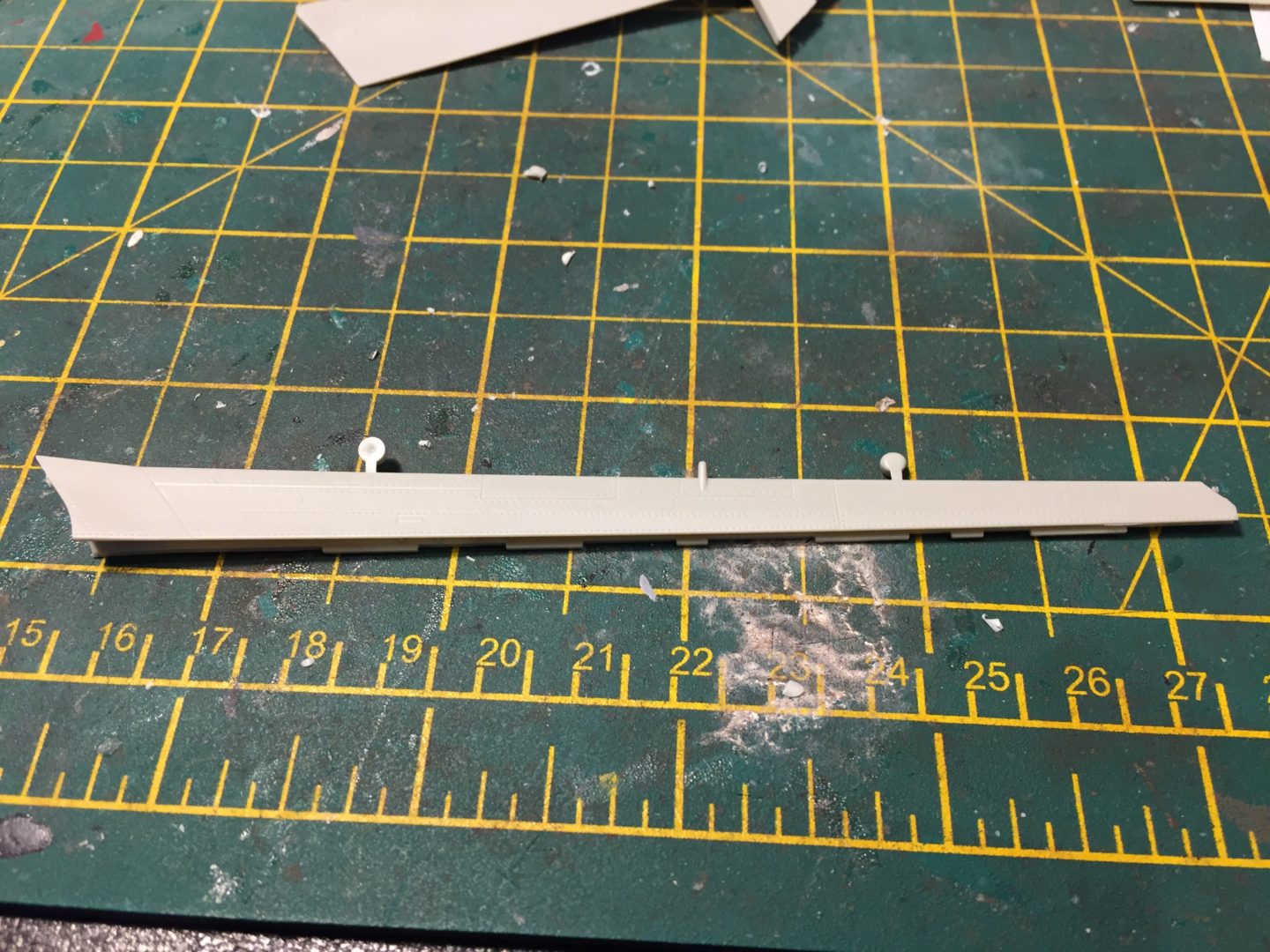 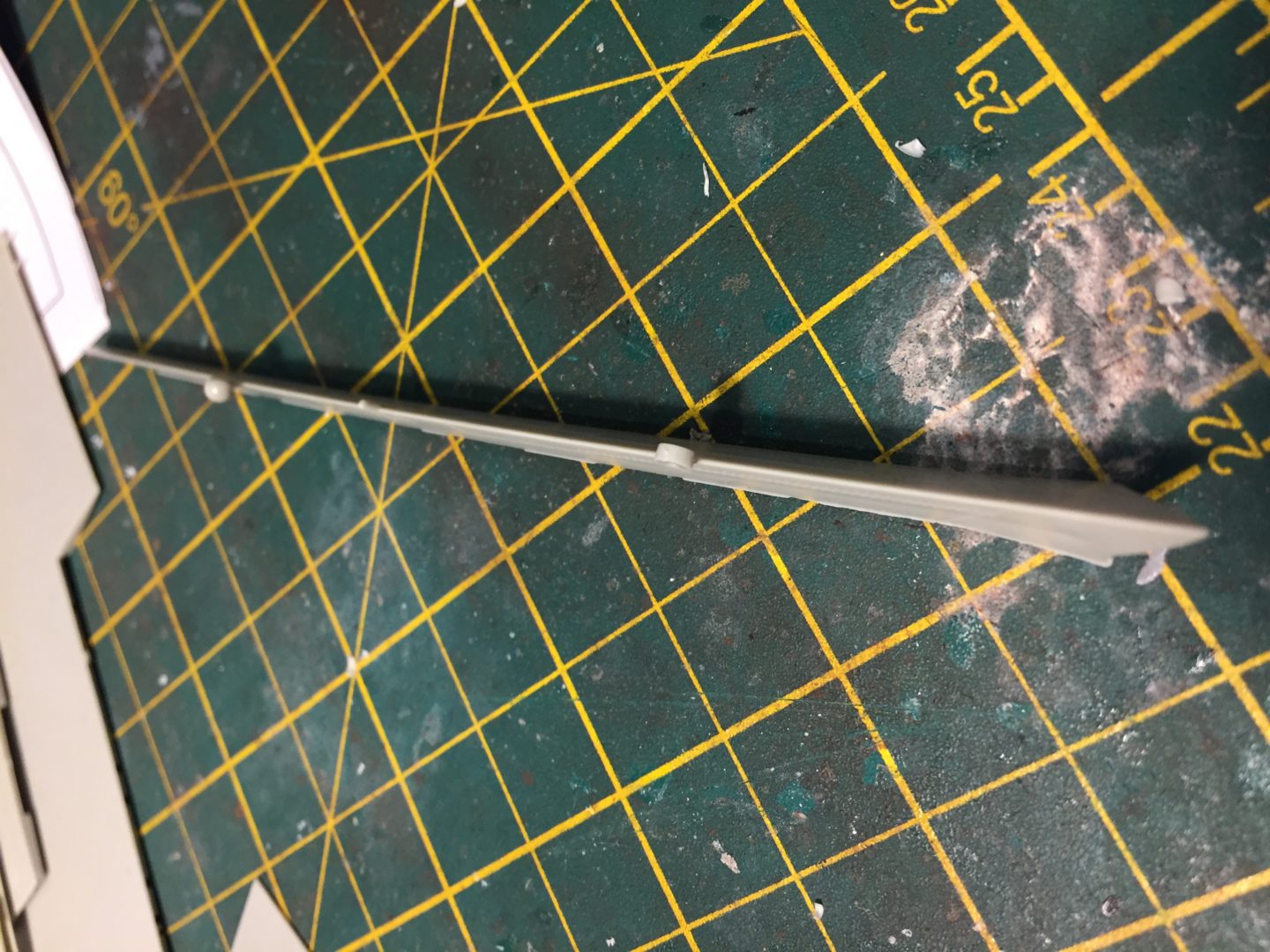 The trailing edge of the wing has more attachment points right on the concave surface where they are prominent and have to be removed for the flaps to fit.  There are some nice little pitot tubes on the wingtip, but unfortunately there’s a fair bit of flash on them. 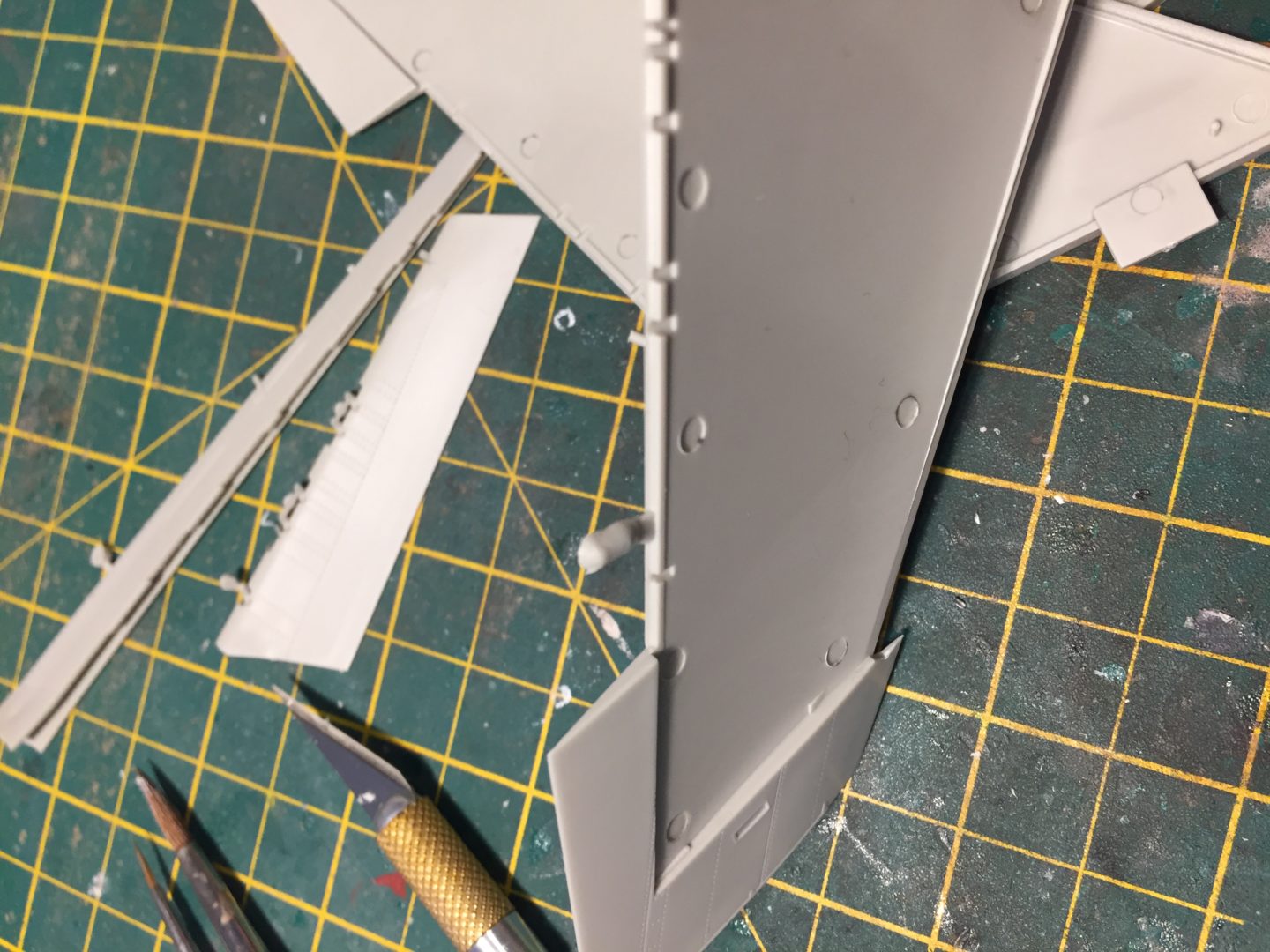 Pro tip (ok amateur tip but whatever): don’t attach the flaps until the wings are in situ.  Ask me how I know. 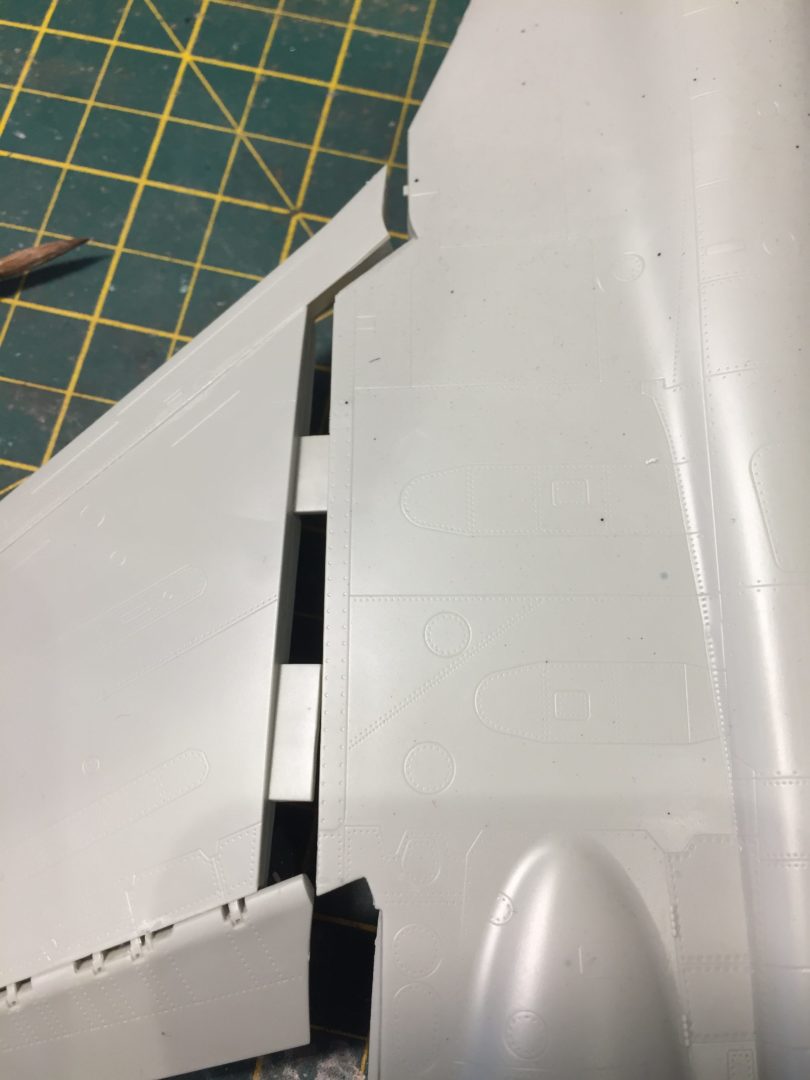 A further point: once the wings have been assembled, they connect to the fuselage leaving a bit of a gap which is very prominent on the blended wing design.  It may be possible and preferable to attach the upper wing surface first and then build the rest of the wing around it.

In all this, there is one step which I haven’t mentioned, and that is the joining of the upper and lower wing surface.  That’s because you need a good run up at this one.

How would you break a wing down into mouldable parts?  Perhaps you would look at moulding in a single piece, or split the entire surface into two.  Maybe you would separate the flaps and ailerons, or neatly cut around them so any seam just blends into the existing gap.

Would you have done this? 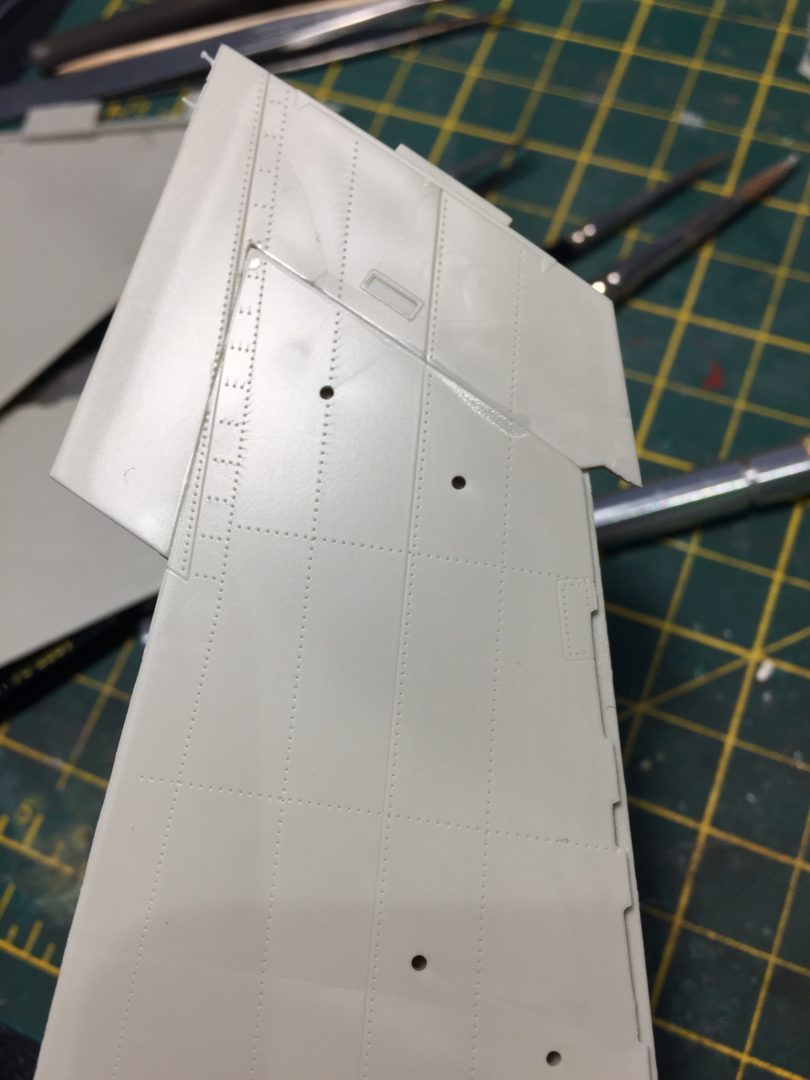 The lower half follows the line of the flap – fair enough – but then when it meets the aileron it doesn’t cut around it, instead going straight through on a diagonal and cutting off the corner.  It’s a stunning example of not thinking it through.

The tail fins and horizontal stabilisers

These went together with no troubles and attached quite comfortably.  I would recommend seating everything in place and then applying glue, because there are a few overlapping pieces and that helped line them all up.

It’s worth adding at this point that the rear fuselage itself has a few small pieces which are not called out in the instructions.  There is a large intake scoop in particular which is visible on a later stage’s image but is not mentioned.  Some other scoops have interestingly shaped divots to align them in, but no corresponding alignment pins, and of course there’s even one which has no alignment hole whatsoever.  Finally, there are two small pieces called out as C91 and 92, which are actually found on sprue E.

By this point, I’m thinking that Cool Runnings yet again said it best: 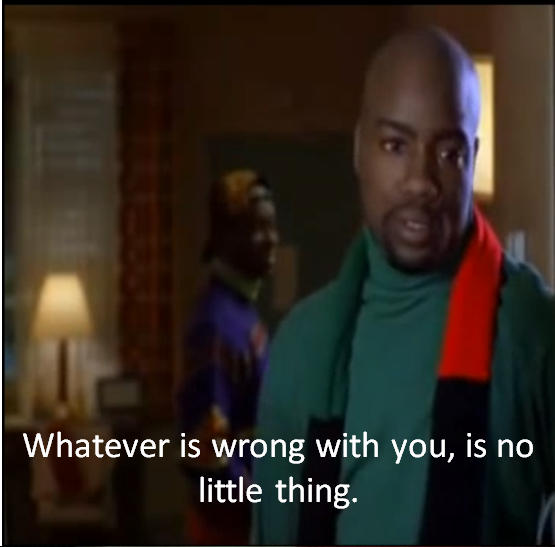 Kitty Hawk provides four sprues of weapons (two pairs of duplicates) which cover a large range of current Russian air-to-air and air-to-ground guided and unguided munitions.  Plus, for quite a few of them, you get multiple options especially of different seeker heads.

These are all laid out in two halves, typically with the extra fins to stick on afterwards.  This does mean you get more gaps, but on the whole I think these are some of the better plastic weapons out there.  Certainly not on a par with the AMK and GWH ones, but a lot better than what you get in Academy, Hasegawa and others.

I’ve gone with a lot of air-to-air stuff on the wings: R-73 on the wingtip rails; a pair of R-60s on a double launcher provided; R-77; and an asymmetric loadout of one R-27-R and one R-27-ER, and can I just say that I was cross that Kitty Hawk provides all the parts needed to make a pair each of normal and ER R-27s, except the extra fins.  Finally, I mounted a pair of KH-31 under the intakes because I think they look neat, and stuck a pair of KH-29 on the centreline for the same reason. 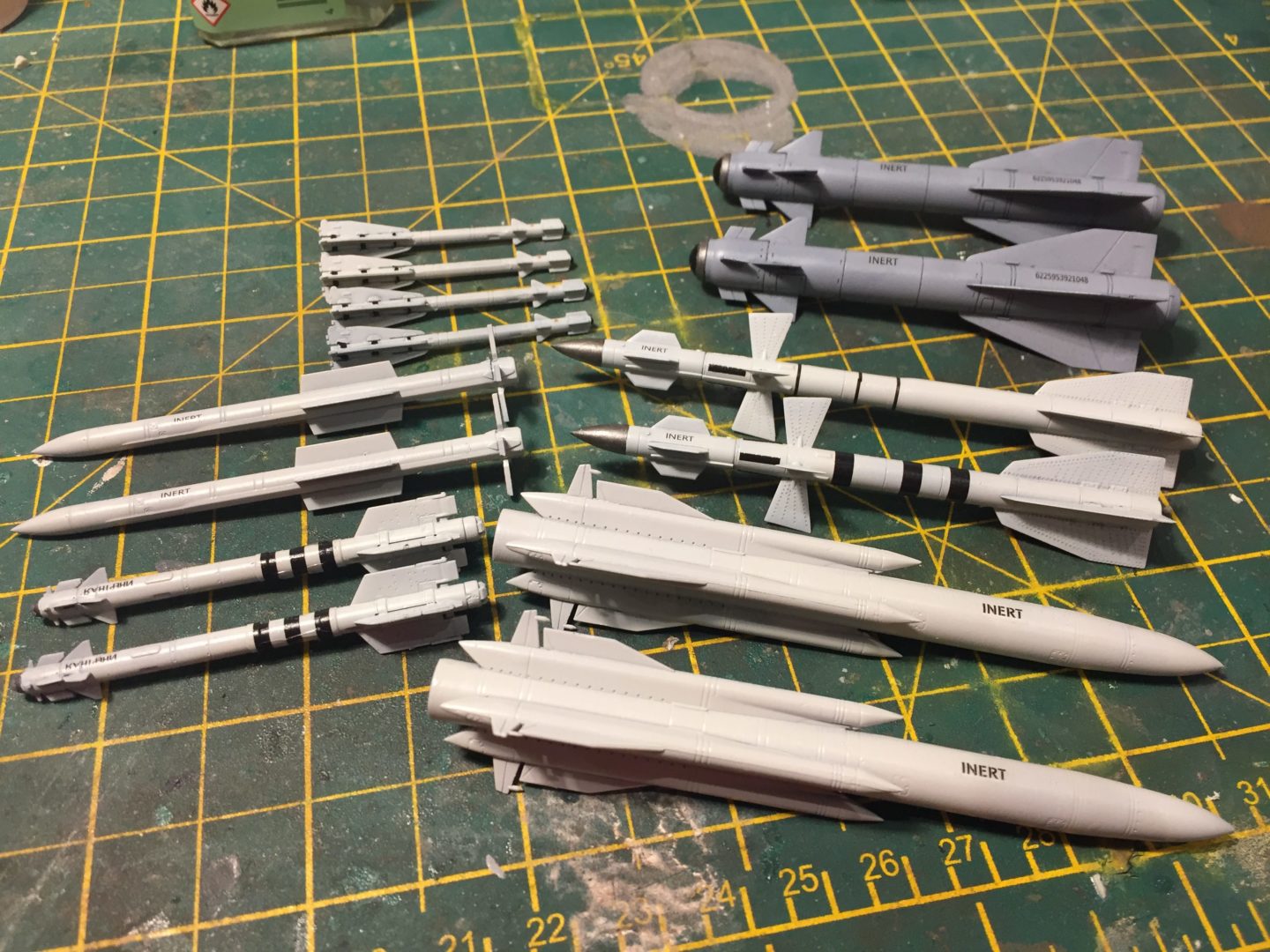 The missiles are provided with decent looking launch rails, and the kit proper comes with some short, stubby ones.  It looks like the missile ones mount onto the stubby ones depending on what needs to be carried, but that’s not in the instructions.  Unfortunately, the launch rails don’t appear to have been made specifically for this kit and their attachment points have nothing to do with the stubbies.  These needed to be cut flat and stuck in place, which means that you get to play around with aligning the missiles in direction of flight with no alignment guidance.  It’s a serious faff, I tell you.

I haven’t placed the main kit decals yet, but I have completed some missile stencils and the decals there have been good.  They went on easily and settled down with a single coat of Micro Sol.  They are thin and look painted on after one application.  If the rest of the decals are the same, I‘ll be very happy.

Do note that a large proportion of the weapons stencils read “inert” in either English or Russian, probably replicating their appearance at air shows.  I’ve gone with it, painting the missiles in the all-over solid colour typical of these demonstration units.  If that’s not what you’re doing, these are not what you want to use.

So we’ve finished the major parts of the build.  Check back soon for the wrap-up of the build experience and final kit review.  At this point, I’m feeling a little frustrated, because I can see exactly where Kitty Hawk’s problems lie and as an MBA who’s reviewed operations strategy for companies from tiny family-owned manufacturers to PLCs, I know how to fix them.

This company could be producing really decent kits of interesting subjects, but instead they are stuck producing kits that are consistently flawed and annoying to build.  By all accounts, this one has to be one of their best, and all the issues I had would – never mind could or should, would – have been caught before it would have cost extra to fix, had they just operated a little differently.