Everything you expect from Tamiya’s classic 1/48 planes: straightforward build and good fit.  Tamiya also give you enough stores to represent a range of Vietnam-era loadouts. 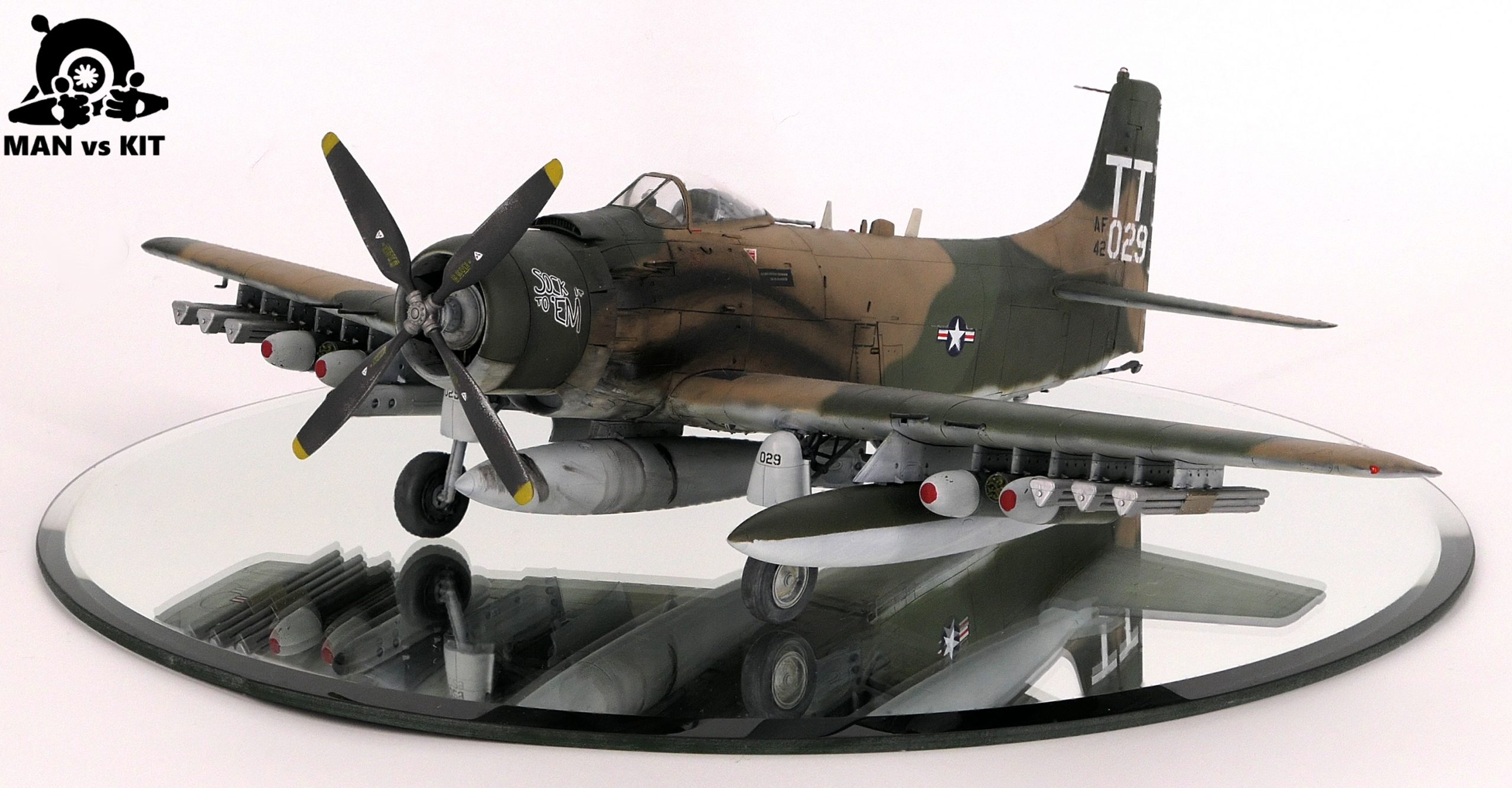 The Skyraider is one of those interesting aircraft that are extremely effective despite not being what their operators wanted.  In the Skyraider’s case, it was a WW2-era piston-engined aircraft that flew slow and low, used by an Air Force that had only been interested in the fastest of interceptors, beyond-visual-range missiles and strategic deterrence.  But over Vietnam, it turned out that slow-moving, low-flying pilots who could loiter over an area with plenty of ammunition, were really, really useful.  The Skyraider’s capability would have been useful regardless, but it became a legend because of its use in search and rescue operations finding downed pilots.  Known as “Sandy” (an early callsign that stuck) these aircraft escorted CSAR helicopters and protected pilots until they could be extracted. 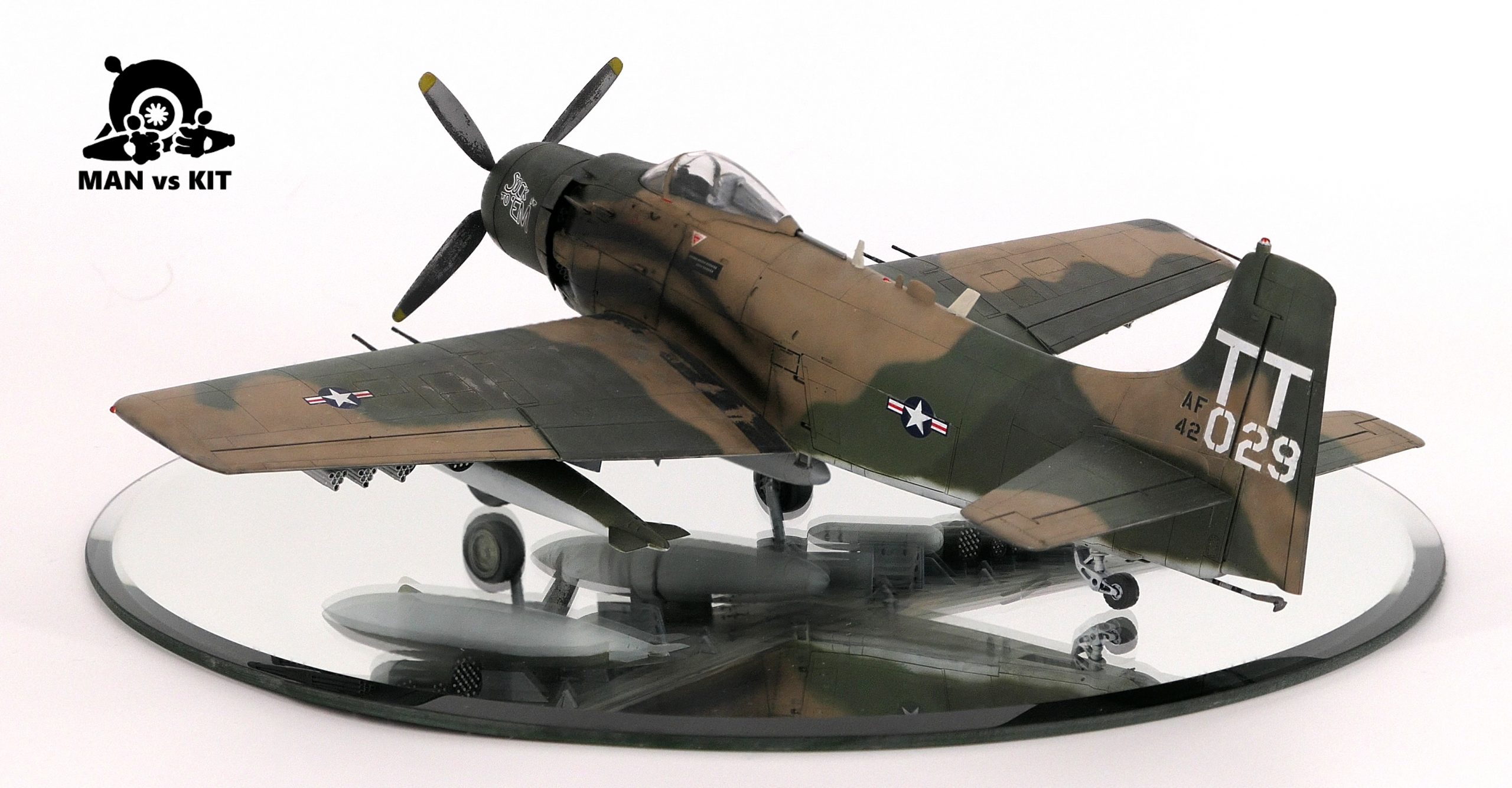 Not only did the Skyraider have the ability to hang around and provide a great platform for air-to-ground operations, it carried a huge amount and wide range of very unpleasant stuff to chuck at anyone the pilot didn’t want in the area.  The plane had four 20mm cannon built in, and rifle-calibre miniguns were often carried in pods.  The US had a wide variety of dumb bombs in sizes from small to unpleasantly large, including crude cluster munitions.  A common one at the time was a group of cylinders, each of which contain a series of grenade-sized bomblets and a big spring to push them out the back of the tube: the pilot could trigger these one tube at a time to consistently keep troops out of an area. 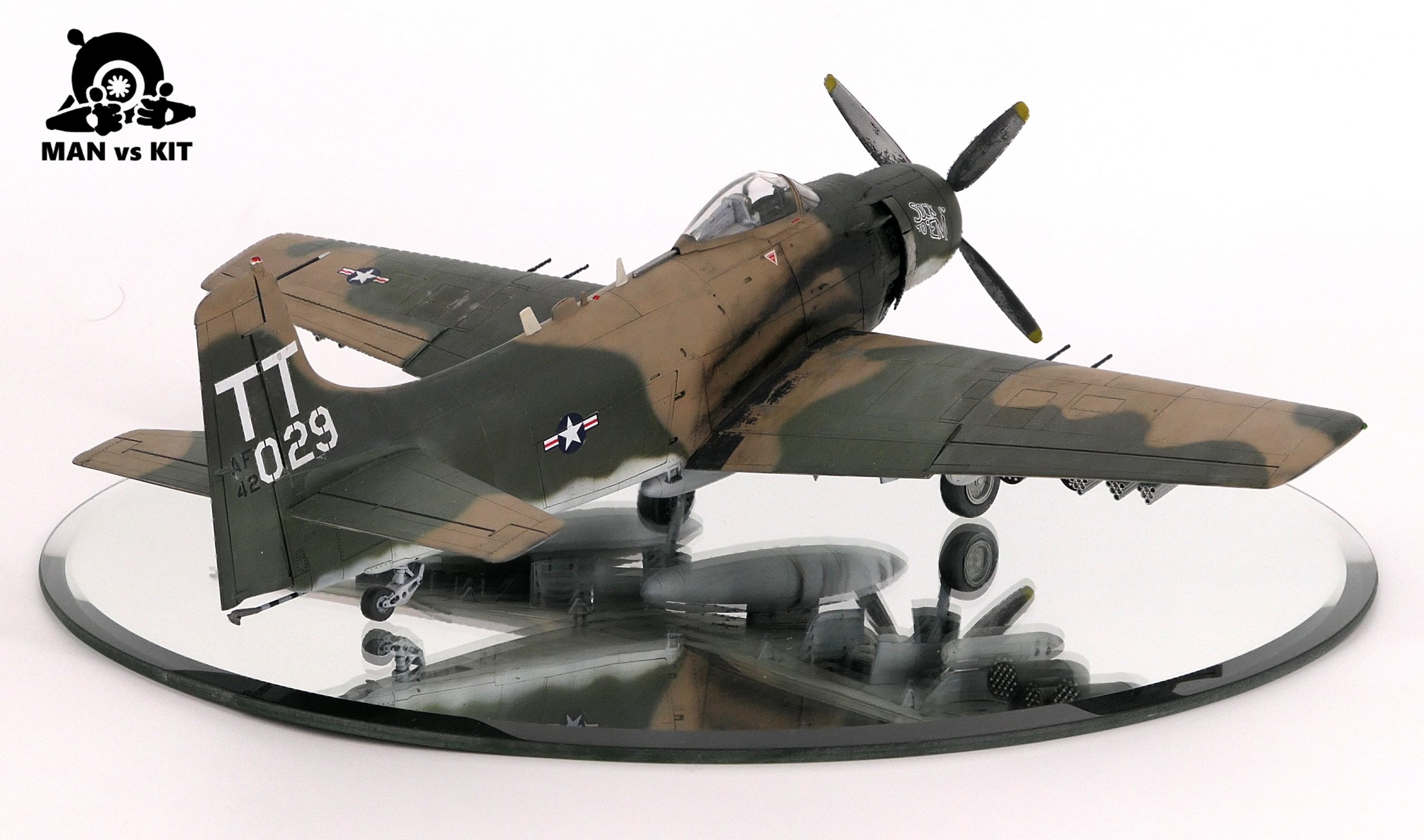 A range of rockets were also provided, again in different sizes, and these came in both high explosive and smoke munitions (smoke at the time being white phosphorus), and of course there was the Vietnam favourite of napalm tanks.  Altogether, I would have thought that seeing some of these aircraft would make any NVA or Viet Minh / Viet Cong troops in the area think very seriously about their motivation, but by all accounts they were a brave and determined bunch. 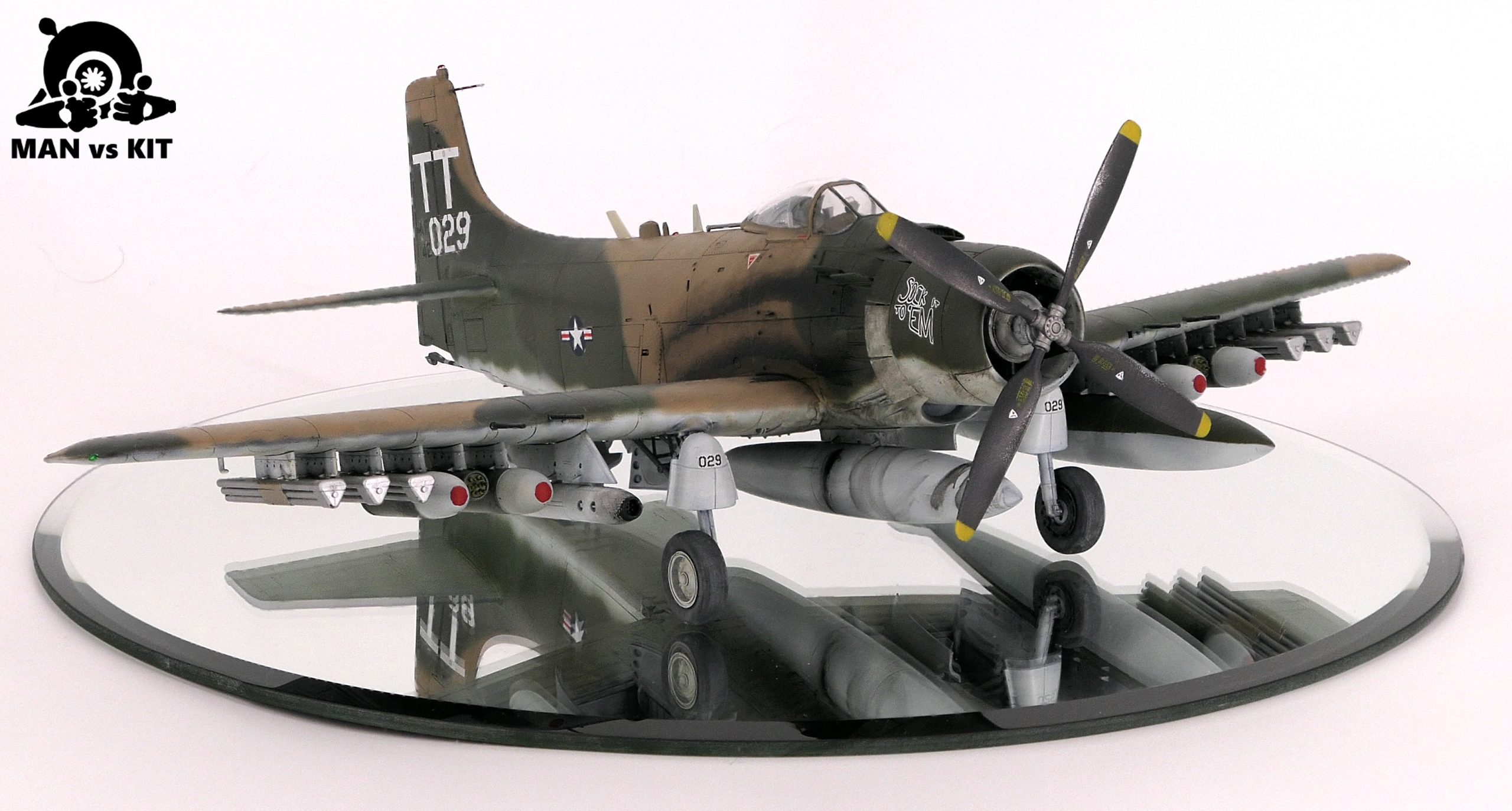 I went with a rocket-heavy loadout which looked similar to those on many photos of Sandy aircraft.  This has the minigun pod, a drop tank, four large rocket pods with aerodynamic fairings (I assume these were very fragile and the rockets burst through them), a couple of small rocket pods, and six bunches of cluster munition tubes.  It certainly looks the business. 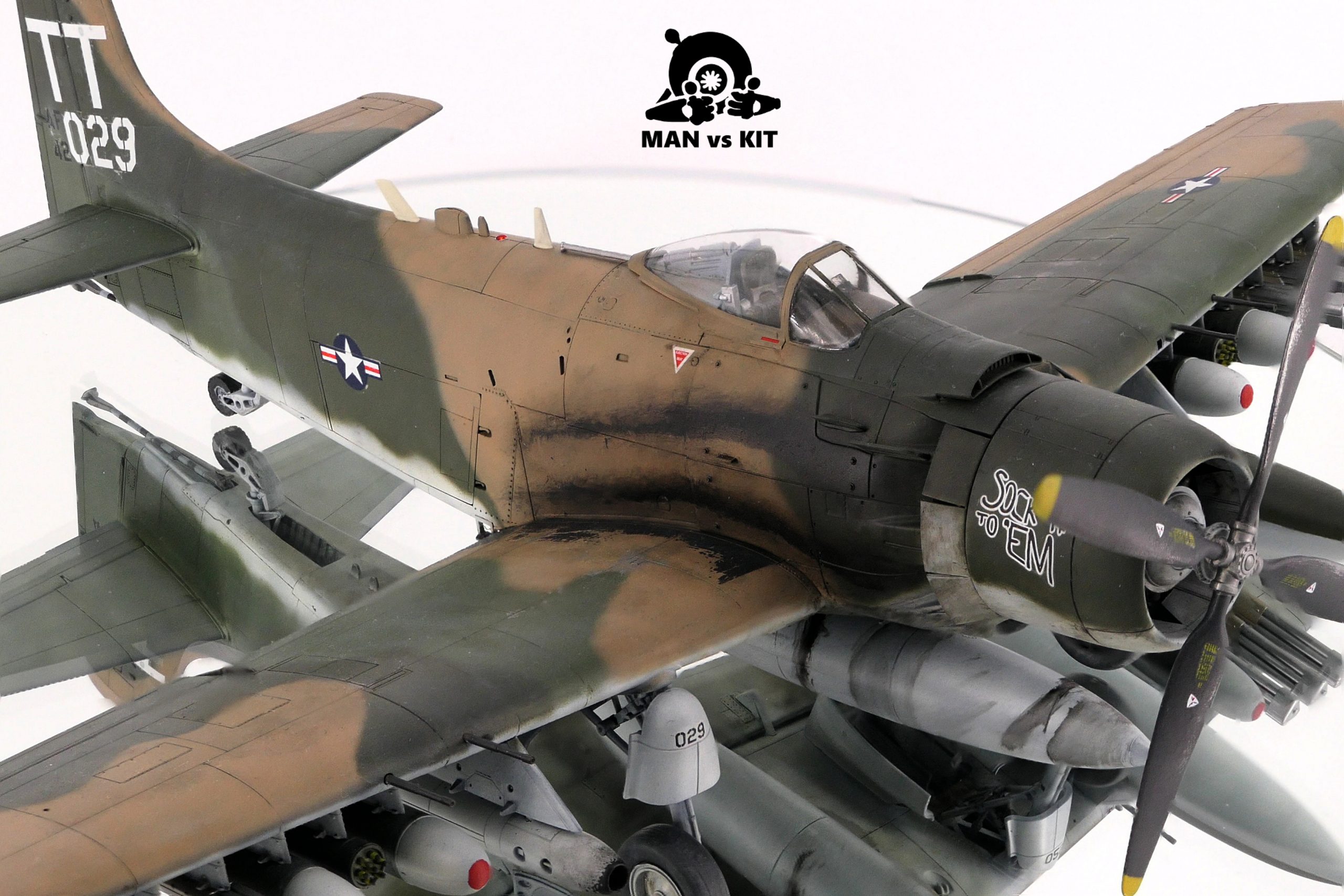 This kit represents the -J variant, which was the last Skyraider type and the one bought by the USAF.  This type had a few structural improvements and an ejection seat, as well as the final uprating of the R-3350 engine.  The R-3350 is the 55l Duplex Cyclone that powered the B-29: a ridiculously huge and powerful 18-cylinder radial providing about 2,700hp; though not, it must be said the most ridiculously huge and powerful radial of the period.  That award goes to the B-36’s 71l, four-row, 28-cylinder Wasp Major which gave 3,500hp. 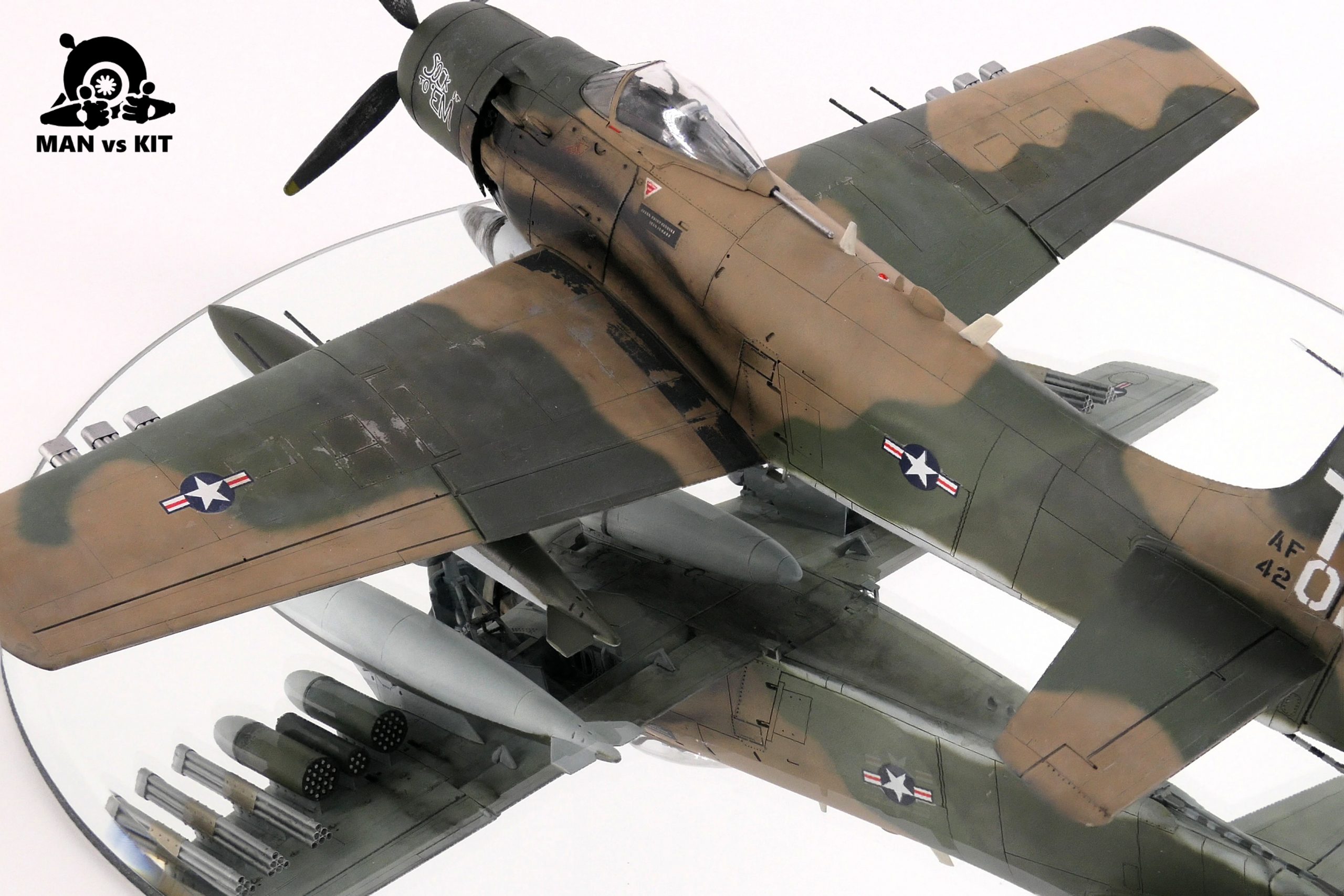 It is often said that the A-1 could carry a heavier bomb load than the B-17: this is approximately true as the B-17 could carry about 6,000lbs internally whereas the A-1 could carry 8,000.  However it should be pointed out that the A-1 could not carry its bombload as high, as far, or with as much defensive armament as the B-17, and of course none of it was internal (which is actually relevant rather than petty because the B-17 was designed to carry a further 12,000lbs externally, it’s just that this capability was very rarely used during WW2 so people forget about it). 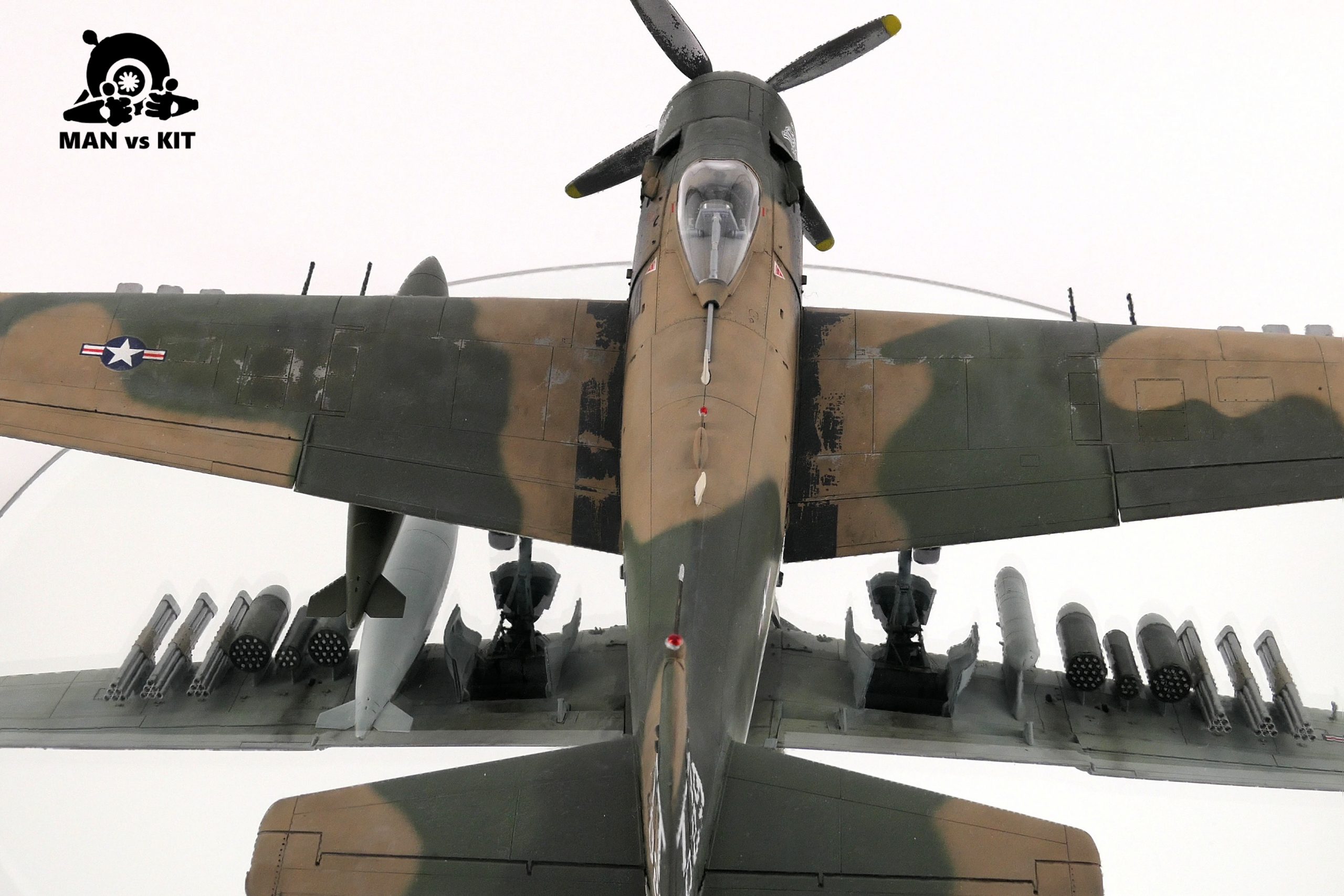 I love these aircraft that came at the very end of the piston era: they were the ultimate evolution of decades of work, and although they were technically obsolete when they entered service, they remained useful, technically excellent and every so often found a niche where they could show their potential.  The Skyraider is no exception: not by any means a glamorous aircraft, but this oil-chugging, low-flying bomb truck did a valuable job that nothing else could do and saved many lives.  It’s just a shame that when conflicts are over, military procurement and doctrine forget the useful plane and go back to their shiny desires, until the next time the mission requires them to go slow, low, and get the job done. 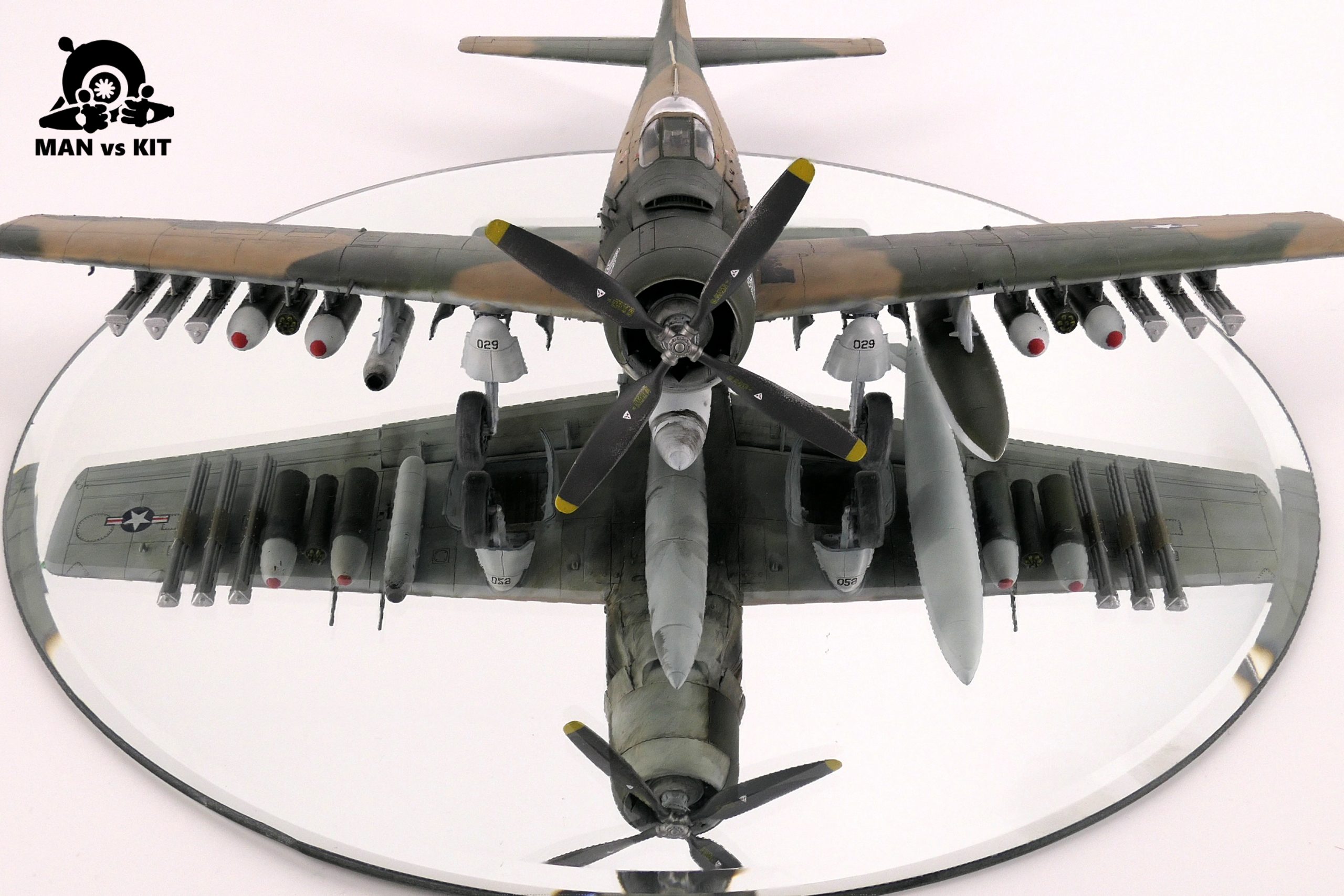 With the low intensity conflict that the USA and Allies find themselves in something like a skyraider. Would have been very useful in places like Afghanistan.

So much so that several options were investigated. They did a bunch of trials back in 2015-16ish, but there wasn’t enough budget to cover it. Currently the A-10 does that job very well and it is worth noting that the Army and Marines ask about buying up the A-10s every time the Air Force tries to get rid of them. It’s also why helicopters are very popular for CAS roles.