I’m currently working on Tamiya’s 1/32 Corsair, and I still need to write up that Type 23 Frigate, but today let’s take a look at something completely different: Tarangus’ 1/48 Viggen.

Like both the MiG-21 and the Type 23, this is one of those builds that comes out of the blue because someone announced a group build that might be fun: Cold War Model Making & Photos group on Facebook’s Baltics build.  I have no interest in the competitive side of modelling, but themed group builds can be an interesting reason to explore subjects or scales that I might not have otherwise considered.  In this case, I had never heard of Tarangus and didn’t even know that a modern tooling of the 1/48 Viggen existed.

Many thanks to my friends over on the Scale Modelers’ Critique Group for suggesting this kit.

I’m doing an in-box review because as I recall we’re not supposed to start them until October.  Also, I figured that if I hadn’t seen one of these kits before, maybe you hadn’t either. 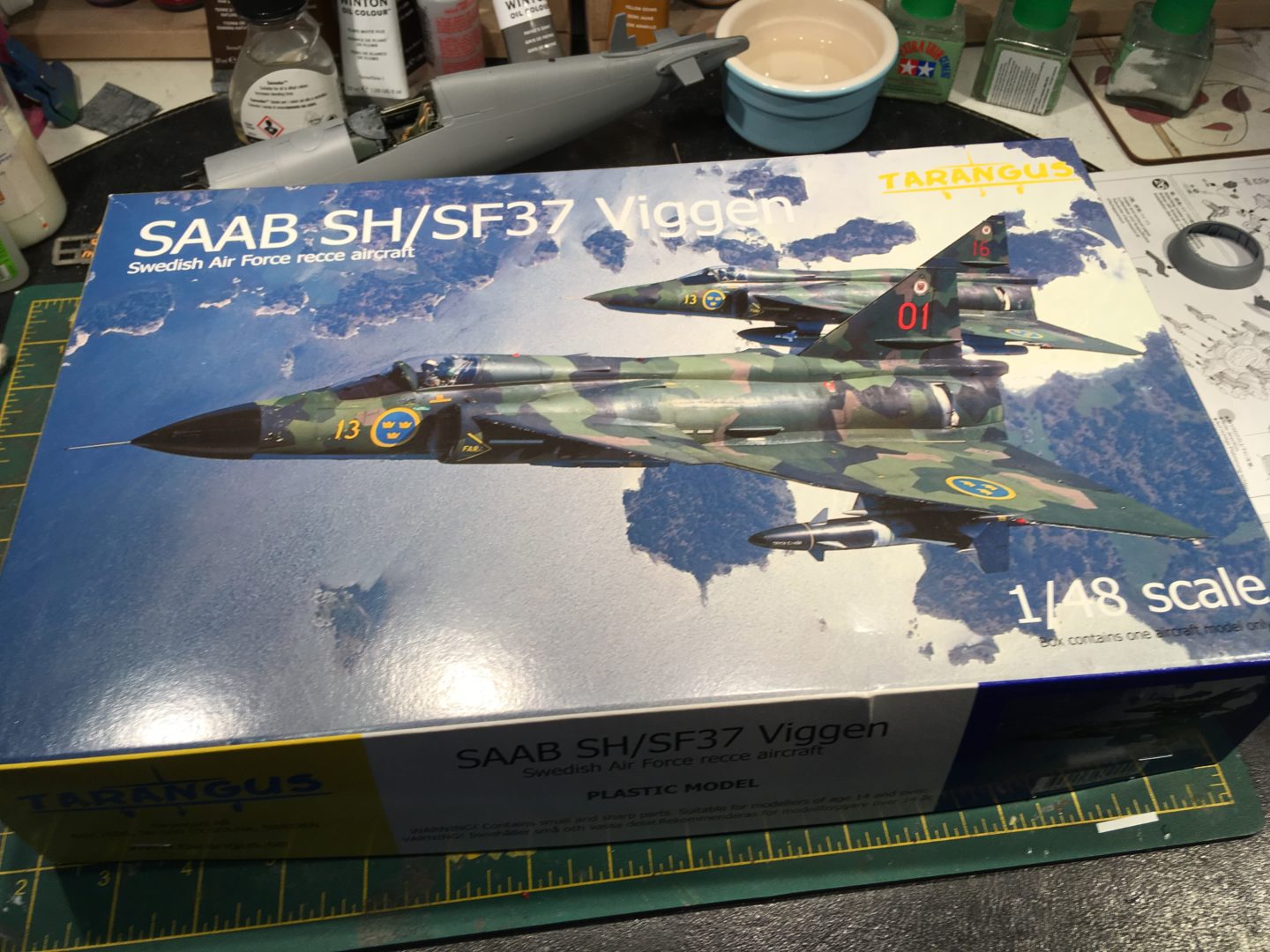 What’s in the box?

Sorry, that was funnier in my head.

The box is a typical cardboard affair, top-opening, with a rather nice photo of a pair of Viggens in attractive four-colour splinter camouflage.  A nice touch is that these two aircraft are the actual ones represented in the kit, although I’m going to have a quick complain and point out that the missiles carried in the photo – AIM-9P and RB-04E I believe – are not included in the kit. 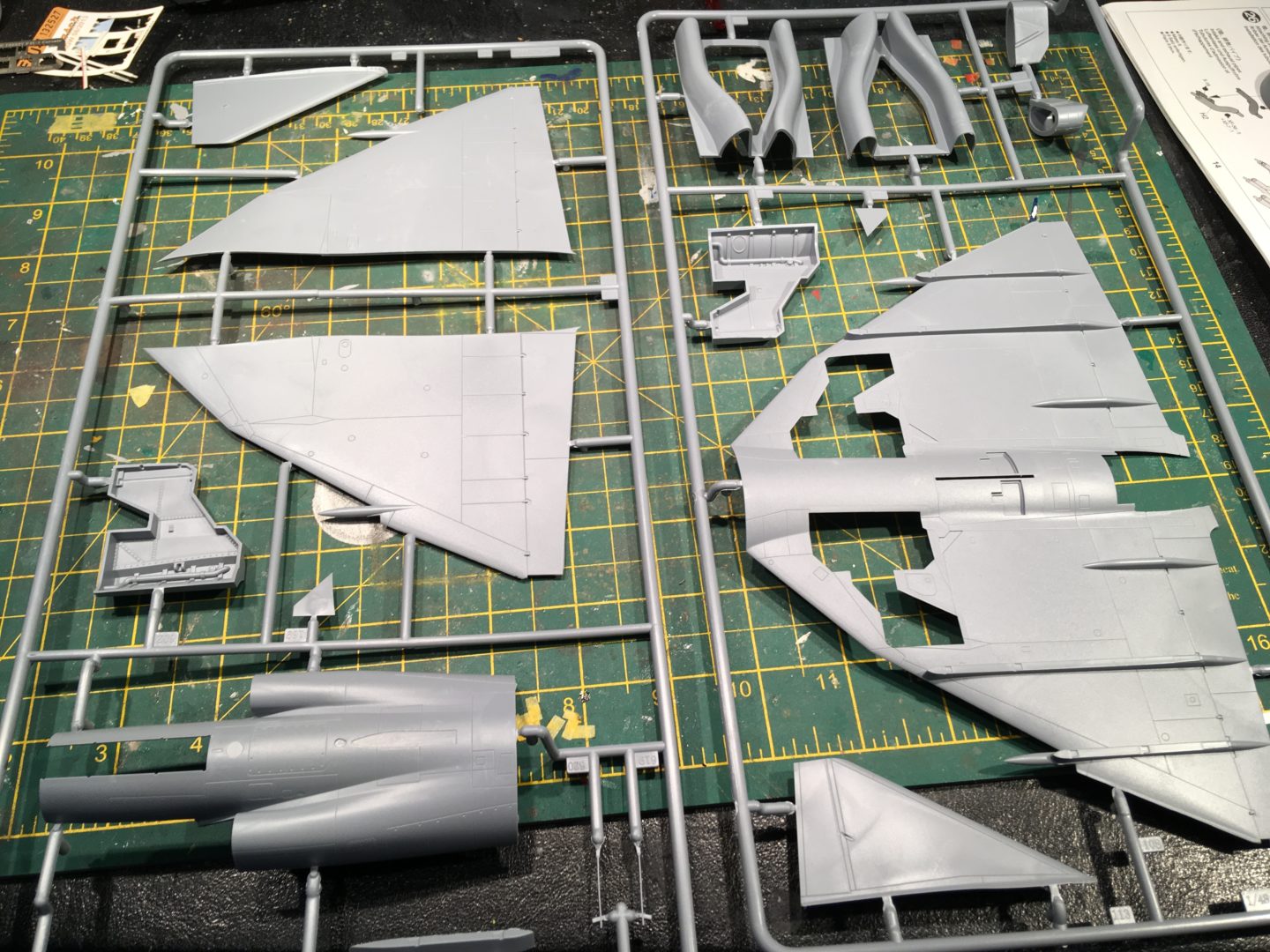 This particular boxing is the reconnaissance variants, the SF-37 photo-recce and SH-37 maritime patrol and anti-shipping variant.  Other boxings include the AJ-37 interceptor/fighter-bomber and the SK-37 two-seat trainer.  This is pertinent as a few moulding decisions clearly stemmed from trying to represent many variants with as much reuse of moulds as possible.

The detail looks nice, and some of the plastic parts are very thin.  I’m a little concerned that some pieces may therefore be designed more to scale-appropriateness than structural strength, but we’ll find out soon enough. 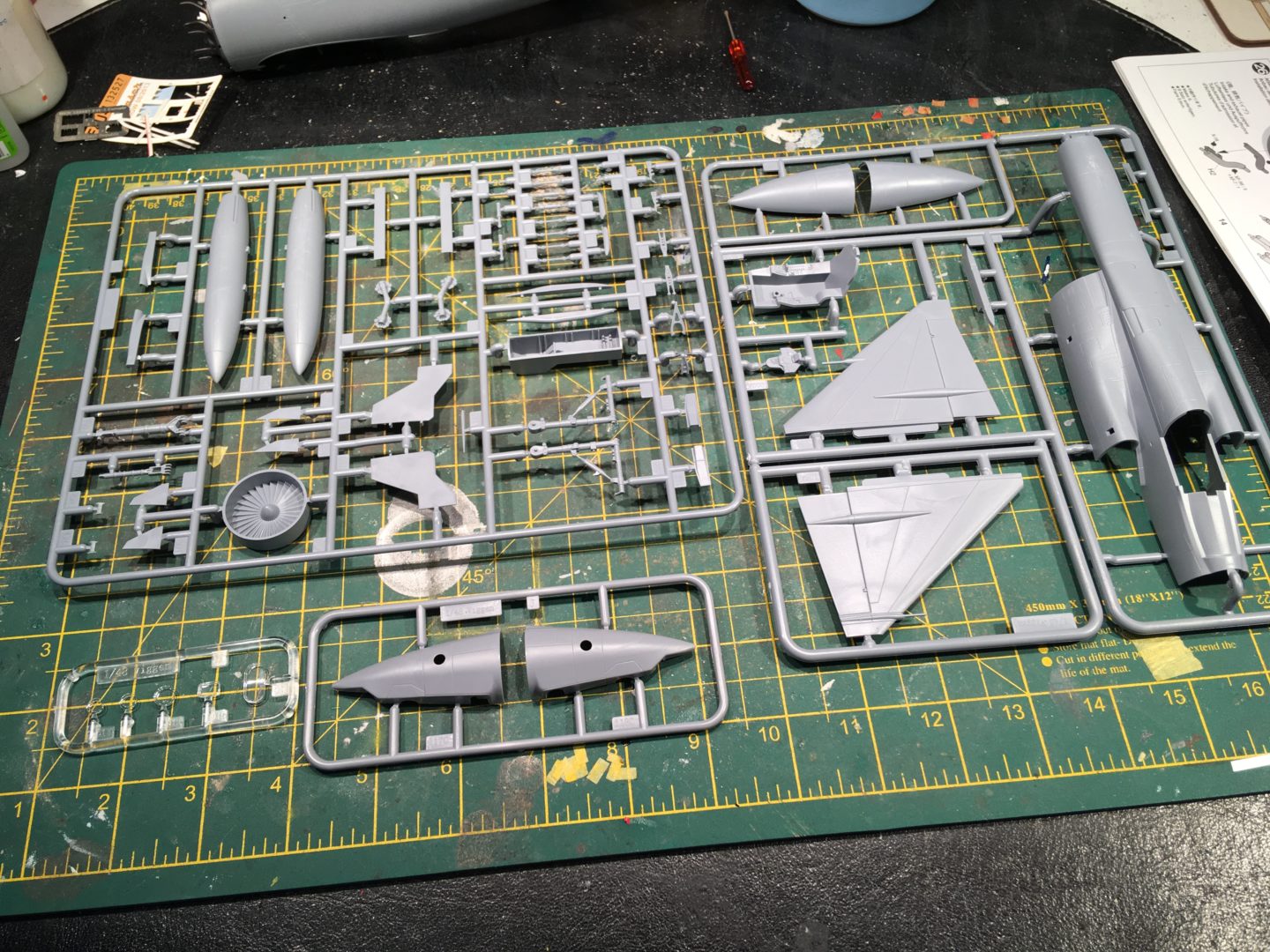 The photo-recce variant requires a different nose section, which is provided on a pair of tiny sprues, one for the nose and the other for the five transparencies.

There are full intake trunks, which is nice as the intakes are mounted high and forward, making them a prominent feature on the finished model.  At the other end of the jet, the unique exhaust system of the Viggen is nicely represented with the ability to pose the reverse-thrust plates in fully open, fully closed, or a half-way position which the instructions highlight as “typical when parked”.   I appreciate these little details, as they are simple things which help add realism. 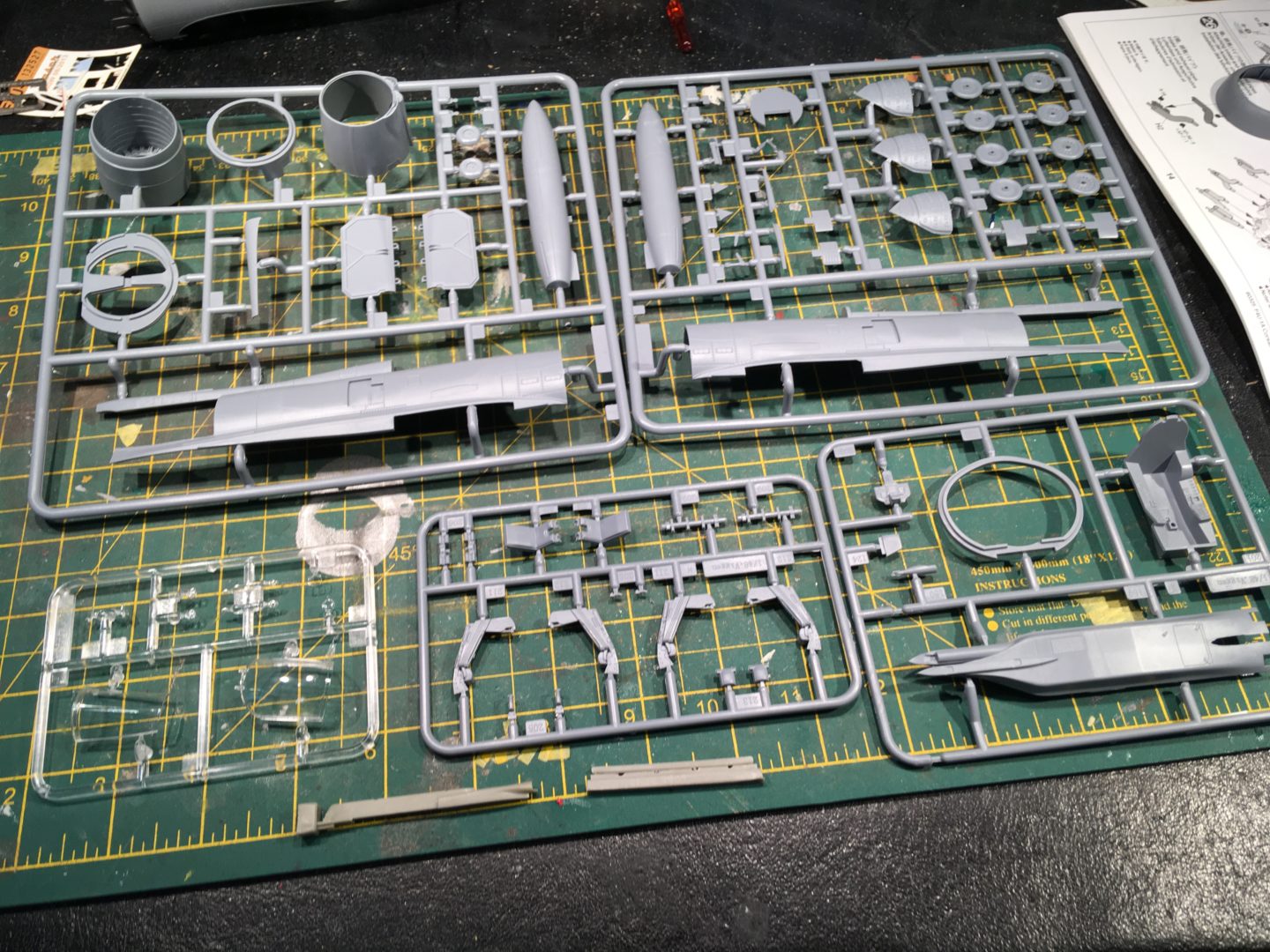 Speaking of little details which I appreciate, there is a note in the instructions saying that out of the box, the kit is designed to balance on its wheels.  That kind of thoughtfulness makes me far more willing to give the manufacturer the benefit of the doubt.

The kit is also provided with a pair of resin parts, one of which is an optional intake (APU I guess) and the other is because they forgot to put a strake onto the sprues. 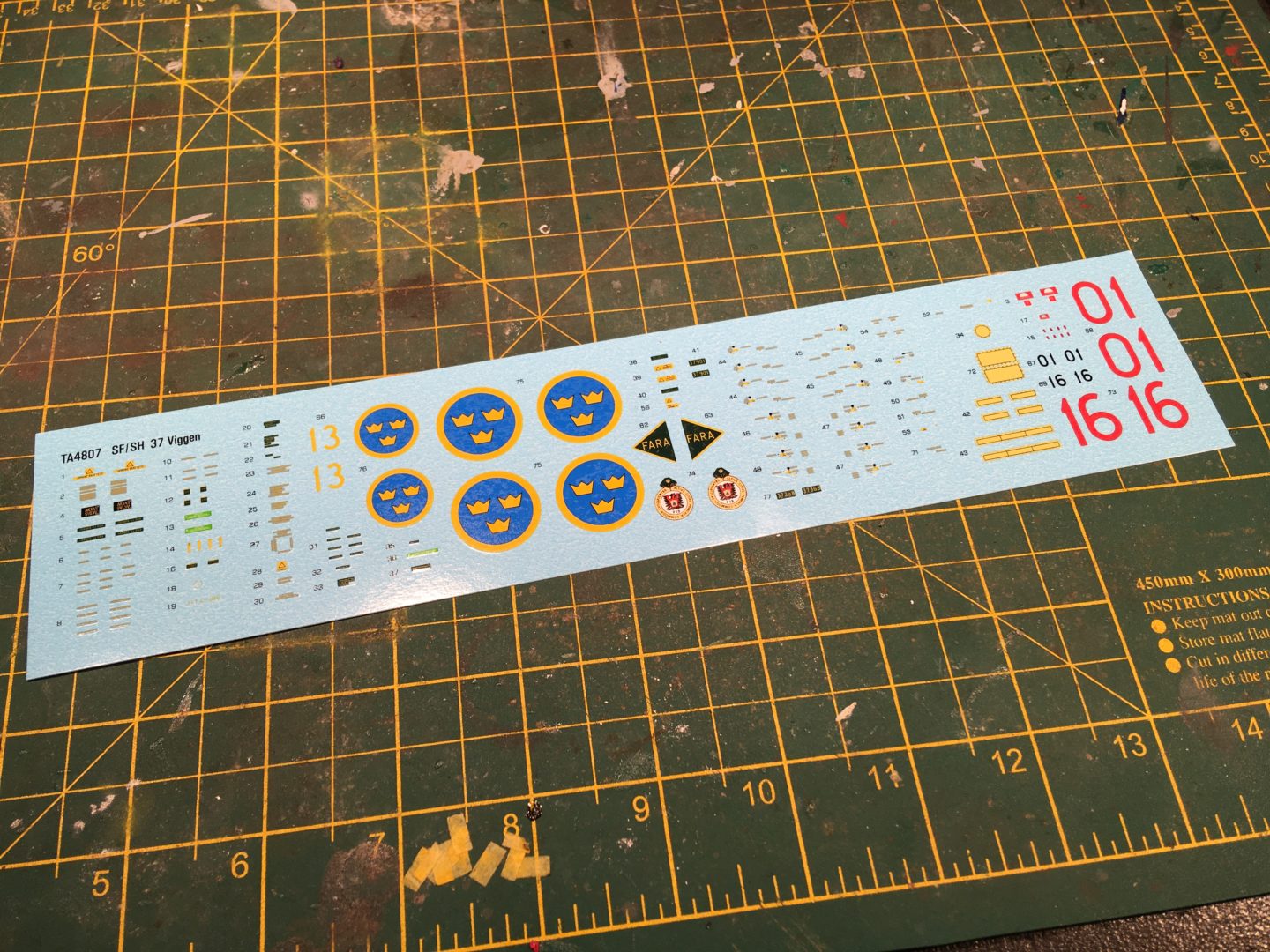 There is a small decal sheet which seems pretty good, and from a quick inspection I can’t see any colour alignment issues.

The instruction booklet is nice, printed on glossy paper and using colour to highlight useful details.  Handy notes for the builder are included throughout.  One thing I noticed while flicking through is that while the sprues are letter-coded, the parts are not referred to as sprue code and number, rather, each part has its own number and these are spread around the sprues in no apparent order.  Fun! 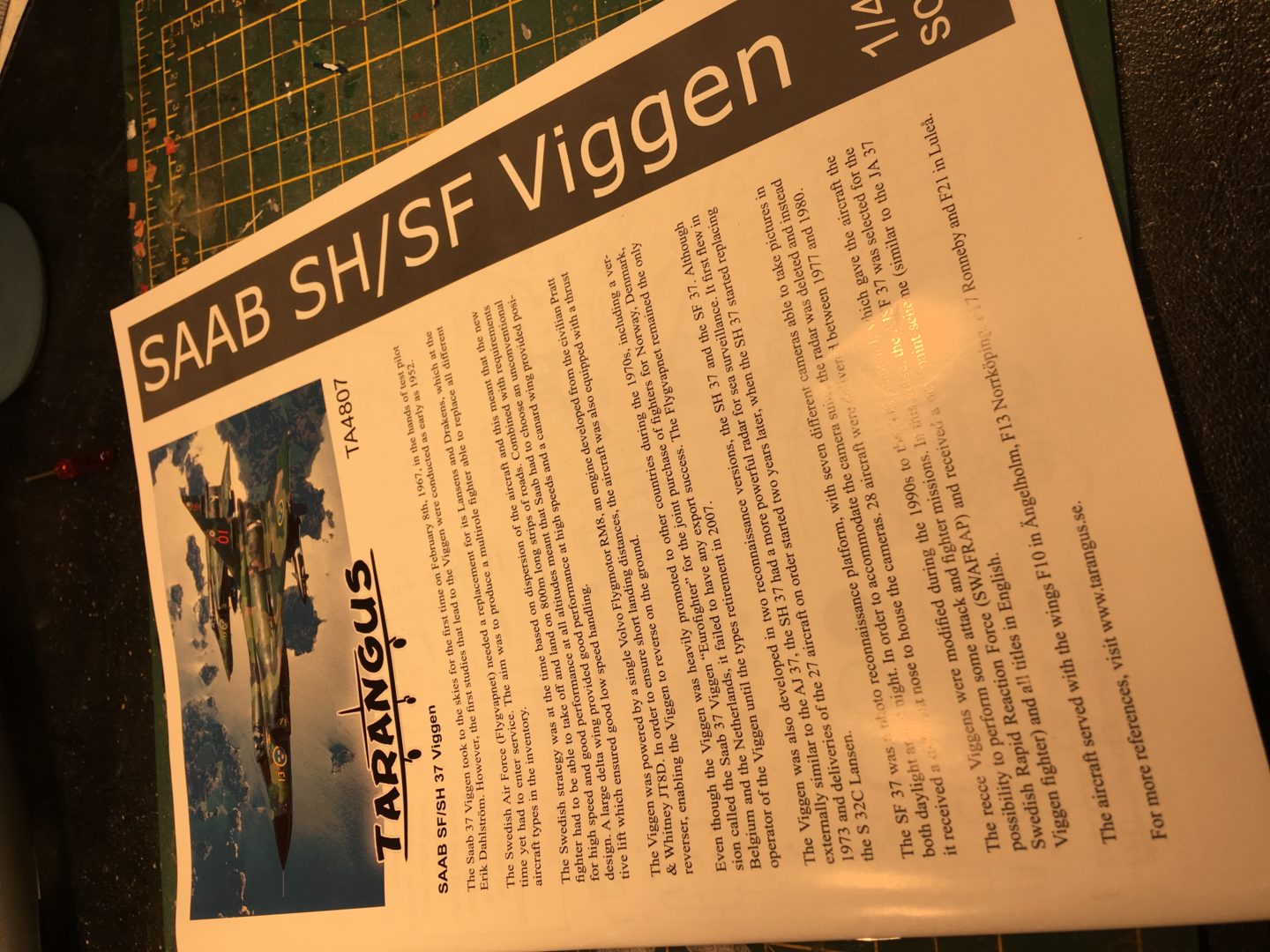 A final detail that I really liked was the separate colour-printed decal placement sheet, on the back of which are full-colour profiles of the two aircraft.  There appears to be a mistake here though: note the second image on the left is a repeat on the fourth, not the reverse side of the photo-recce aircraft.  Oops.  I like that the colour callouts reference Mr Paint (MRP), I love these lacquer paints and bought the appropriate Swedish colours as soon as I ordered the kit.  I also have a set of the splinter stencils on the way. 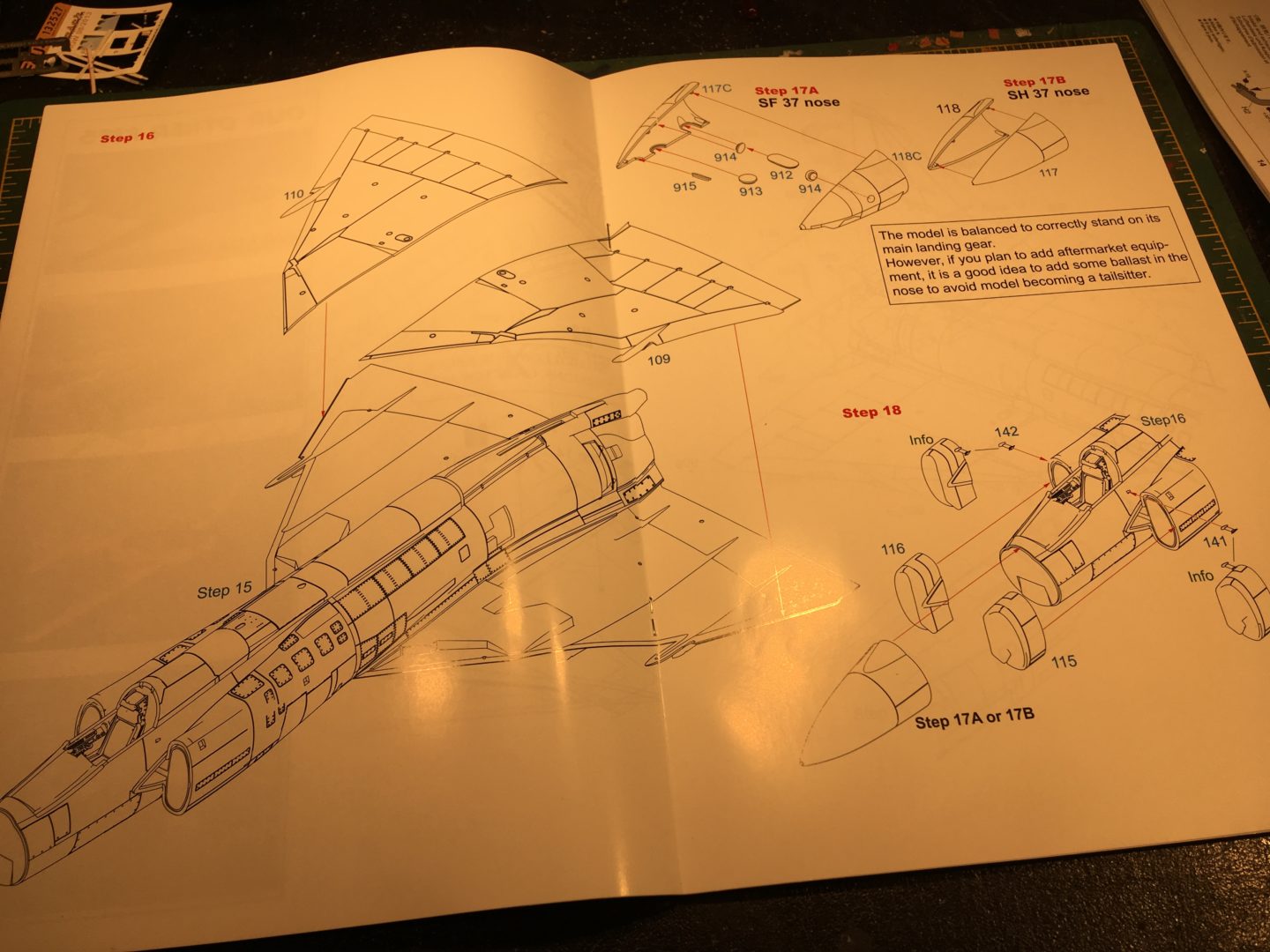 I just saw the back page of the instructions.  Mostly this is useful, and it is well-intentioned.  But please, please stop spreading misinformation about washing sprues.  This is why there’s so much ignorance in the scale modelling community. 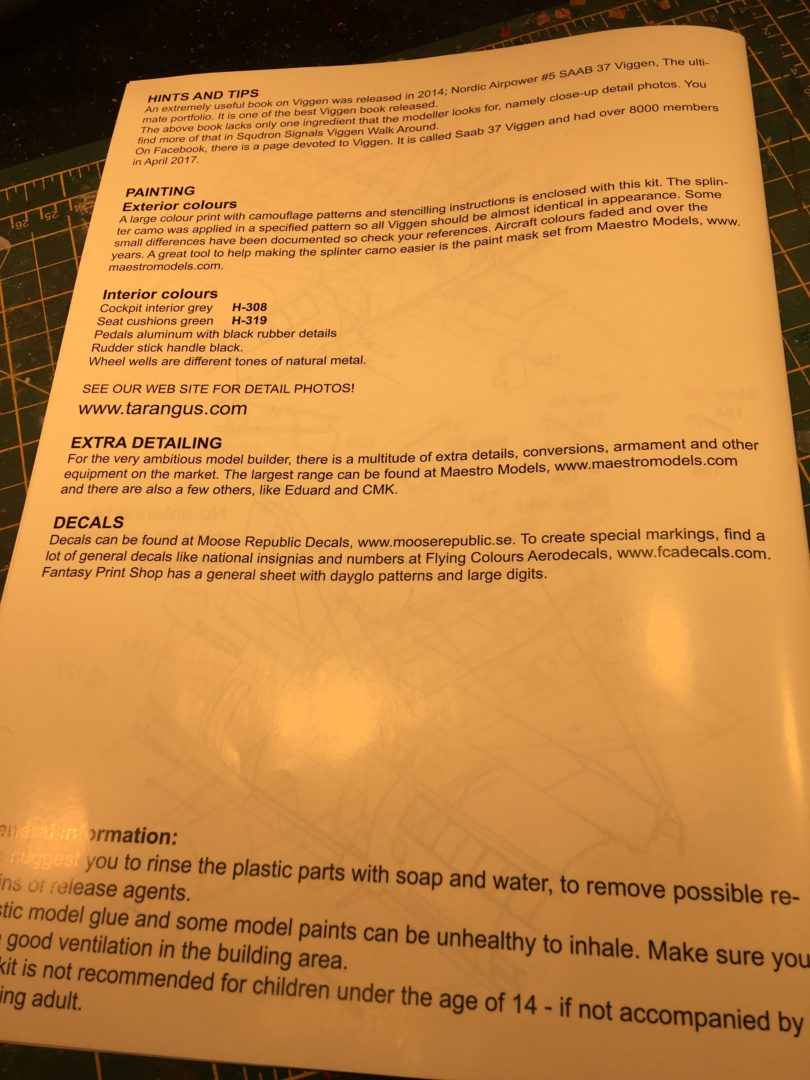 It mostly breaks down quite sensibly, but there are two potential problem areas.  In fact, they look like potential for a massive fail.

The first is the nose section: the choice of radome or photo-recce nose.  Both nose sections, and the forward fuselage they fit onto, are butt joins with no locating or alignment aids.  It’s actually worse than that: both sides are stepped as if there will be a corresponding step to slot them onto.  This is fine, but all the parts are stepped the same way. 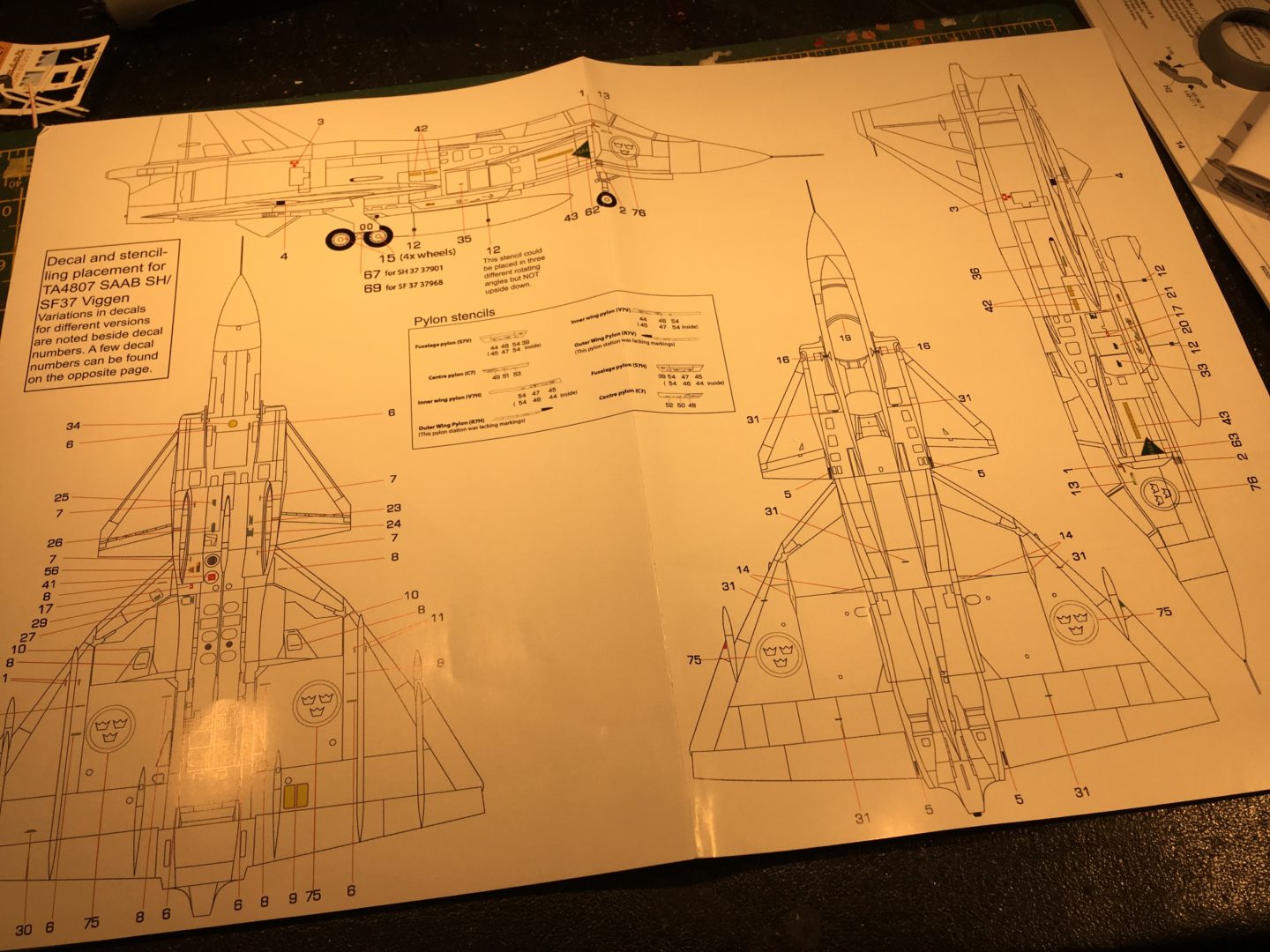 The second is the fitting of the forward fuselage to the rear fuselage.  There’s not even a pretence of locating aids here.  It attaches across a complicated, L-shaped join and I can see that being really tough to line up without creating a step somewhere.  We’ll see how it goes together: maybe there’s some magic that happens where the intake trunking creates an internal structure or something. 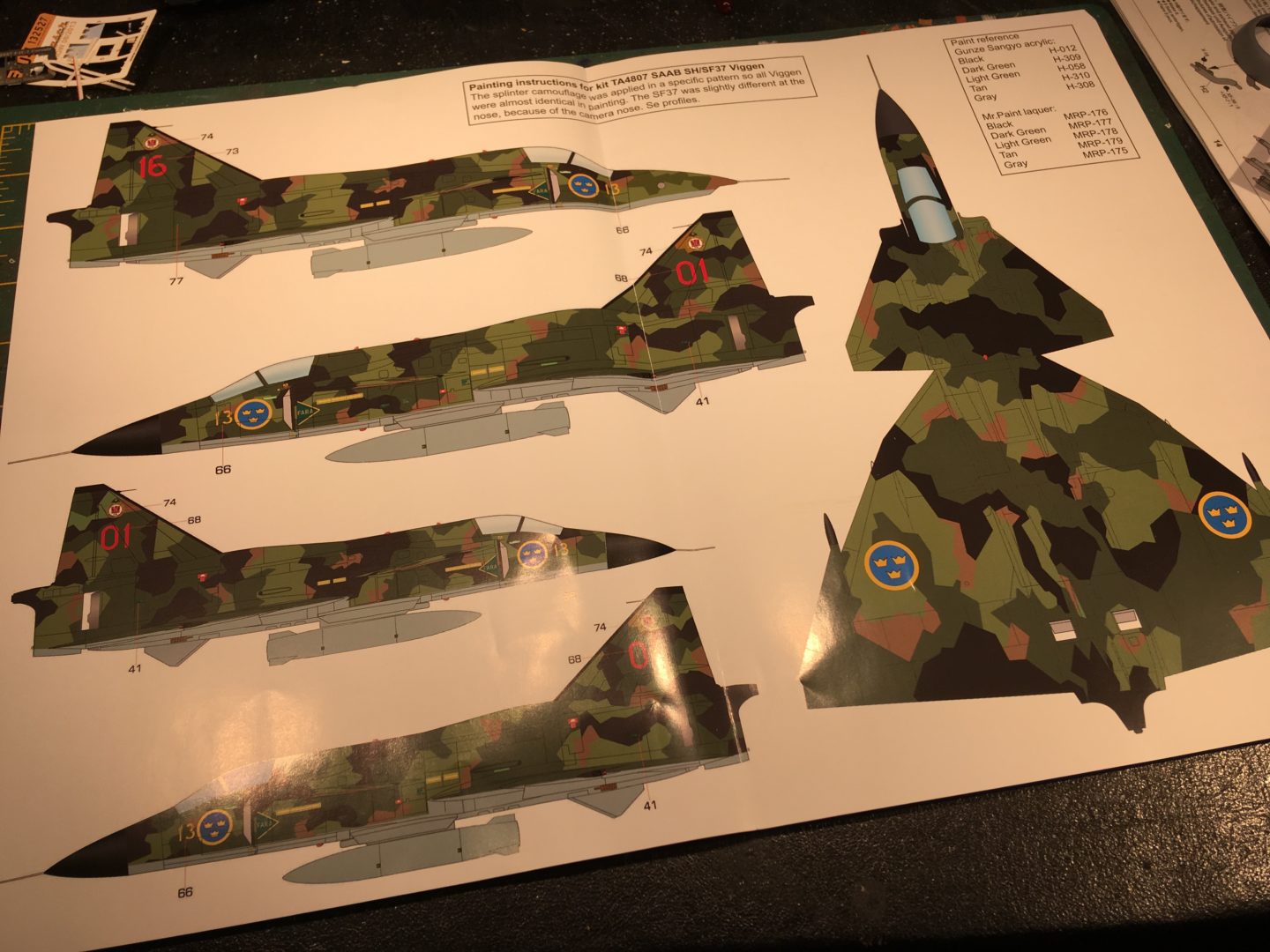 It’s a shame because overall this looks like a competent kit, but it may be let down by its desire to represent all the variants.  Absent that, Tarangus could have done a straight left and right fuselage half and saved a lot of potential bother.

I’m intrigued to see how this kit goes together.  And I’m really looking forward to building it as it is going to look really striking on the shelf.