I didn’t enjoy this build.

The kit goes together so poorly that it was just a miserable experience.  Despite what felt like endless iterations of filling and sanding, the finished kit still has what look like major seams in places.  Frankly, it probably needed to be entirely filled, rescribed and fully reriveted, because simply adding correct rivets alongside the kit ones didn’t work well.  The surface texture was so poor that the whole surface had to be sanded anyway. 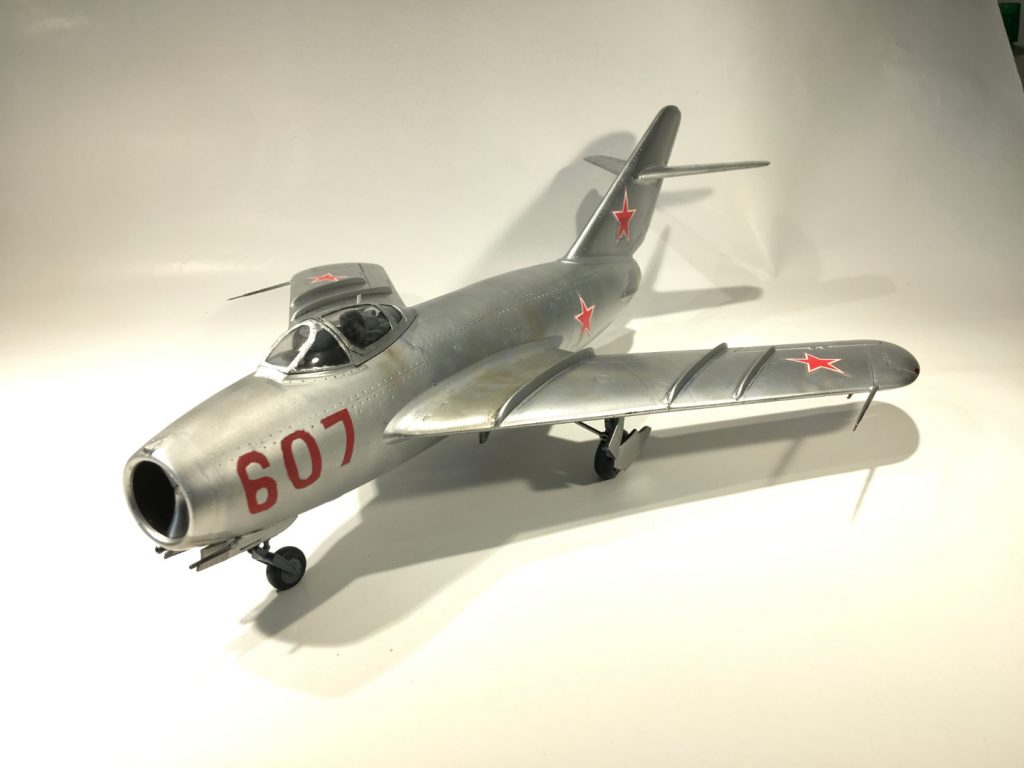 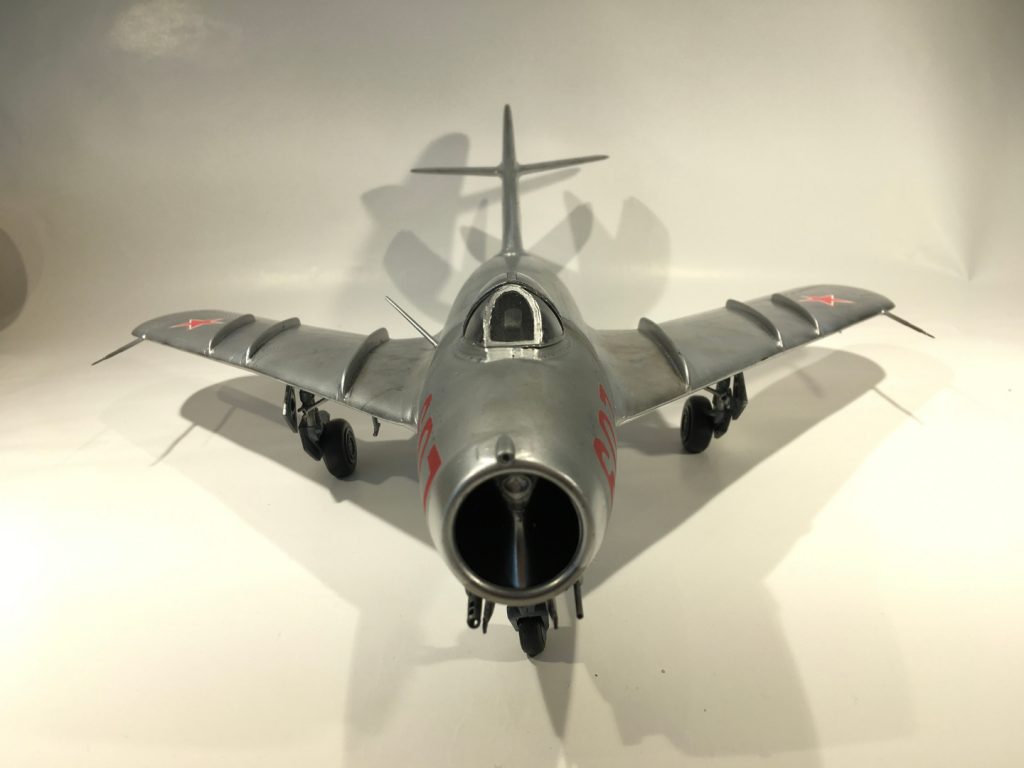 The cockpit is awful.  Detail is non-existent, and so small that aftermarket parts don’t fit.  The Pavla seat impinges on the control column, and a hole needed to be cut in the cockpit floor in order for it to fit under the canopy.  Further, the forward part of the cockpit is too long: it’s shaped for the radar-equipped later model.  Because of this, the forward canopy has been stretched by Trumpeter.  Except… they went too far.  It has a terrible profile, more upright, much like the two-seat UTI version.  Even I felt the need to perform major surgery here, cutting off the front glass and changing the angle.  The glass was replaced by an acetate sheet, but that wasn’t actually very successful. 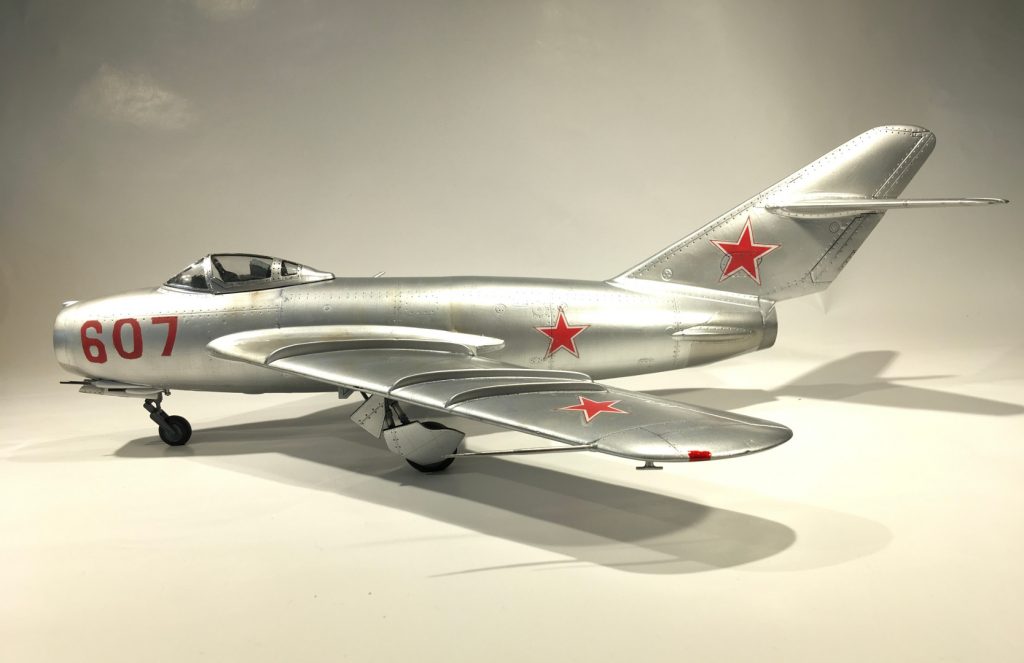 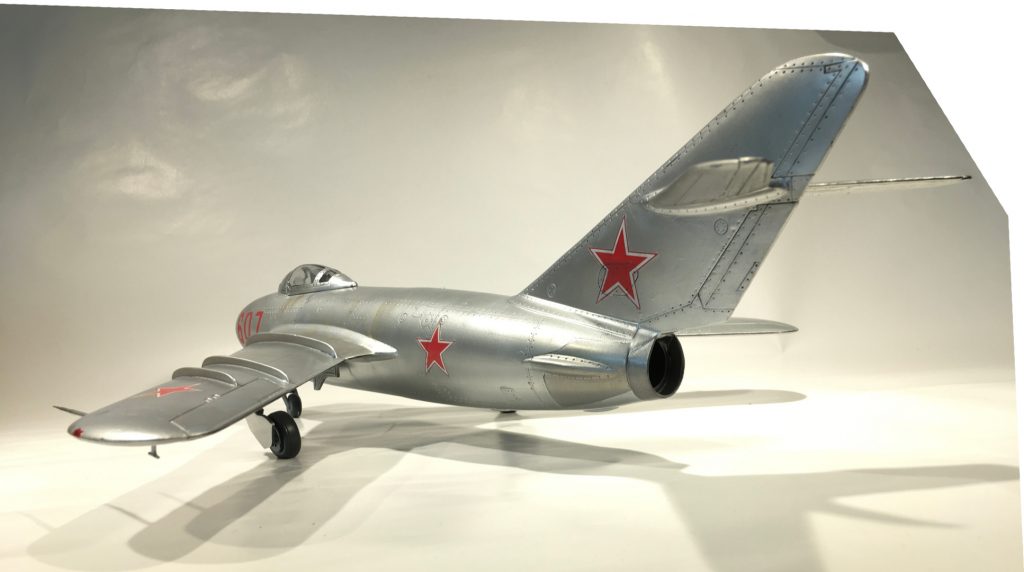 The guns are barely more than blobs of plastic.  Metal barrels improve the look, but the gun fairings themselves don’t match up with the fuselage, they are too short, don’t fit the locating holes provided, don’t match the curves of the fuselage, and I think the guns are even moulded at the wrong angle. 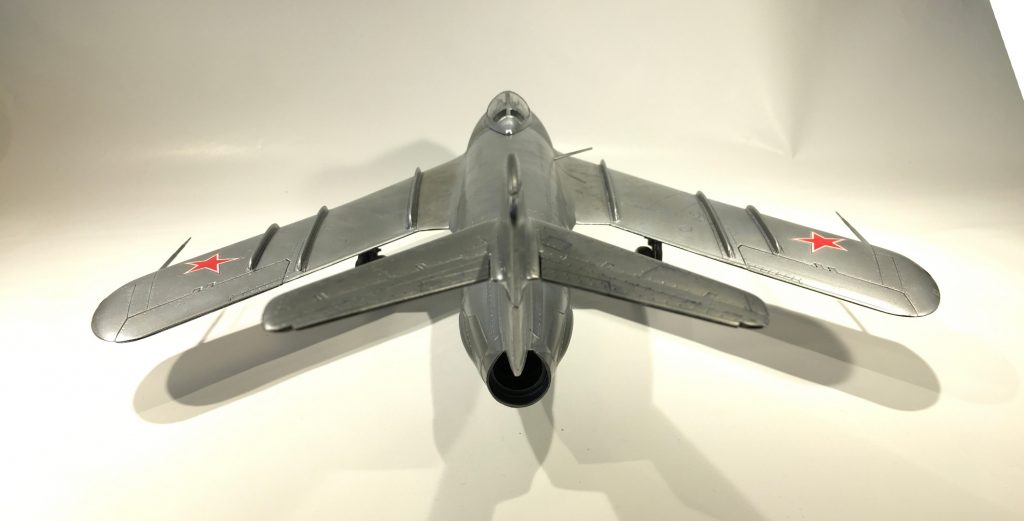 The wings don’t fit to the fuselage, nor the tailplanes to the tail.  The four-way join of the front-rear-left-right fuselage parts actually goes together more neatly than expected, though the cross-section is different front to back and requires a bit of squeezing.  Oh, and the engine doesn’t fit in the fuselage. As in, you can’t close the fuselage with the engine in a normal position.  This kit was designed to be built with the tail off, and that is that. 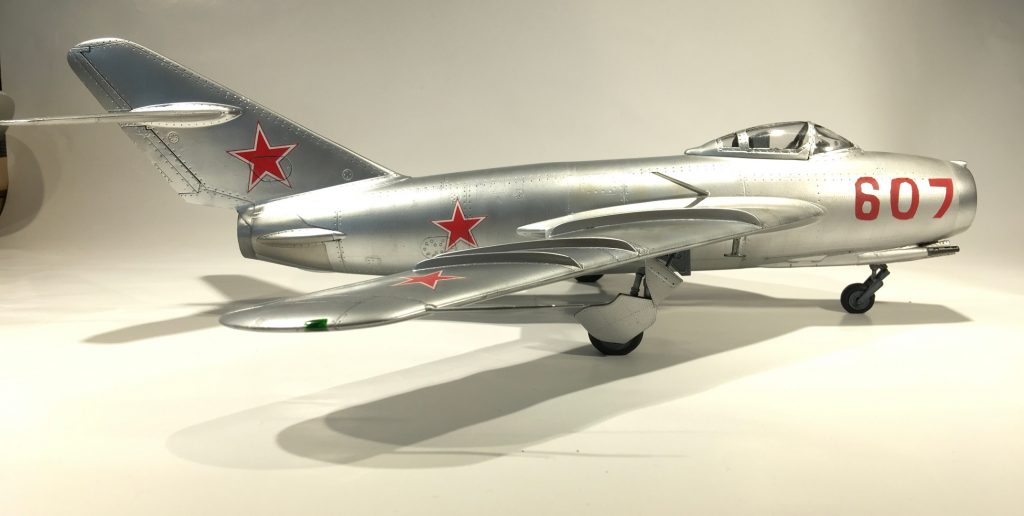 – Wheels replaced by Profimodeller ones

– Gunsight replaced by Profimodeller as well

Paint was Kcolors Aluminium over GX2 black. I cannot fault the Kcolors, it looks superb and now I’m learning how it works it’s actually easy to use. I had quite a learning curve with these but that’s because I’m an idiot. The finish is a mix of MRP Semigloss Clear on most of the aircraft, and Alclad Flat on the front.  I painted the aircraft to match this weird two-toned reference I found, and added the “607” Bort number to match. I’m guessing that airframe is part natural metal, part painted. 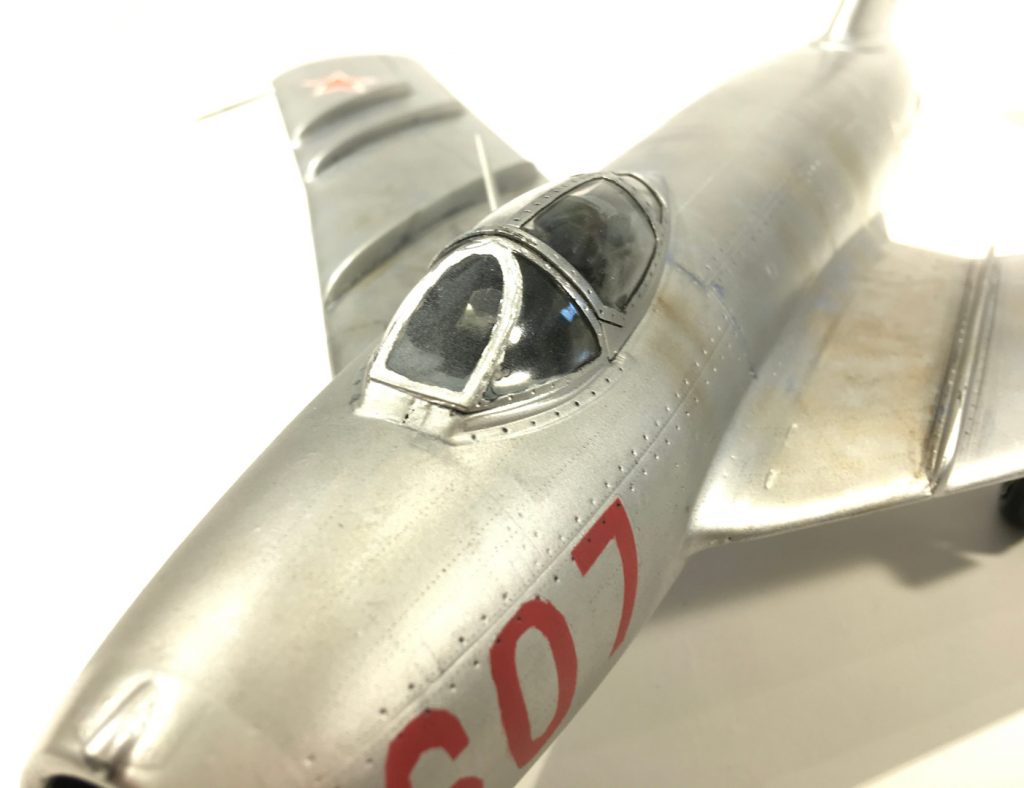 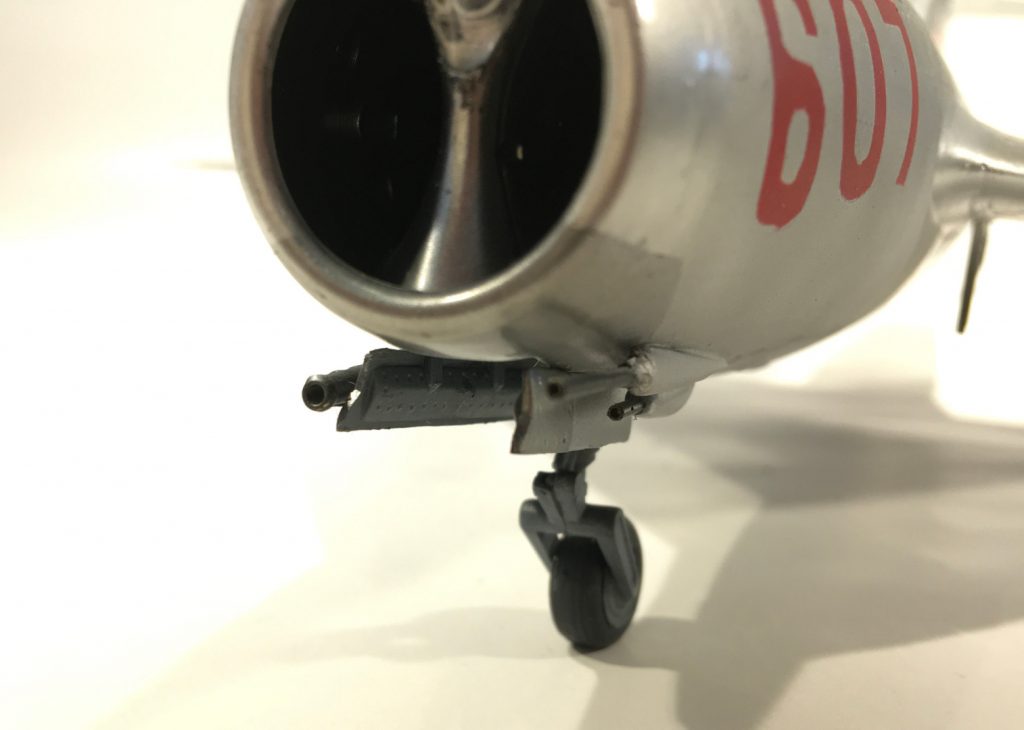 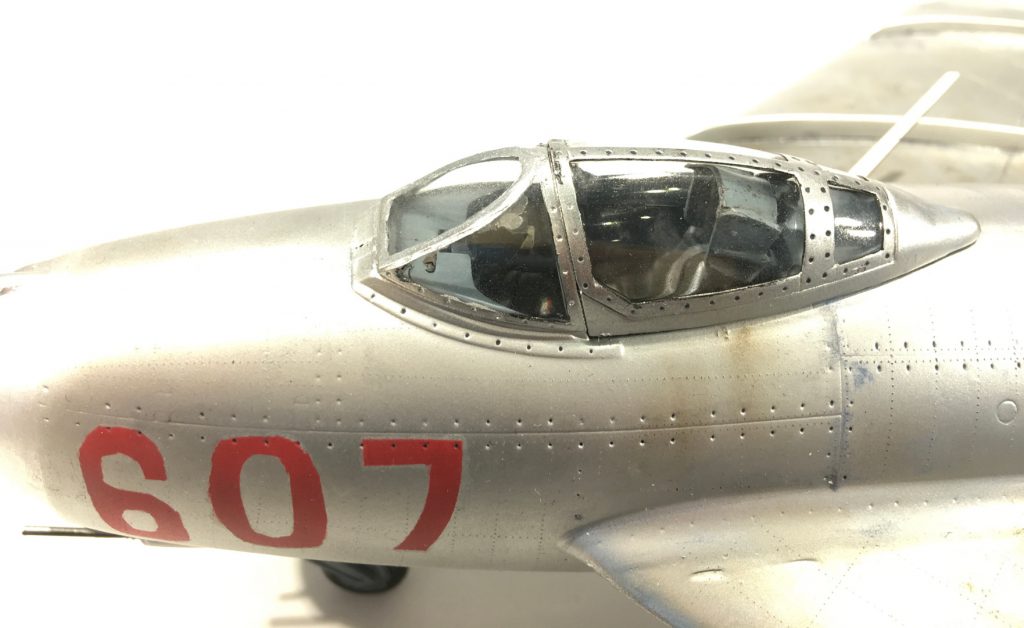 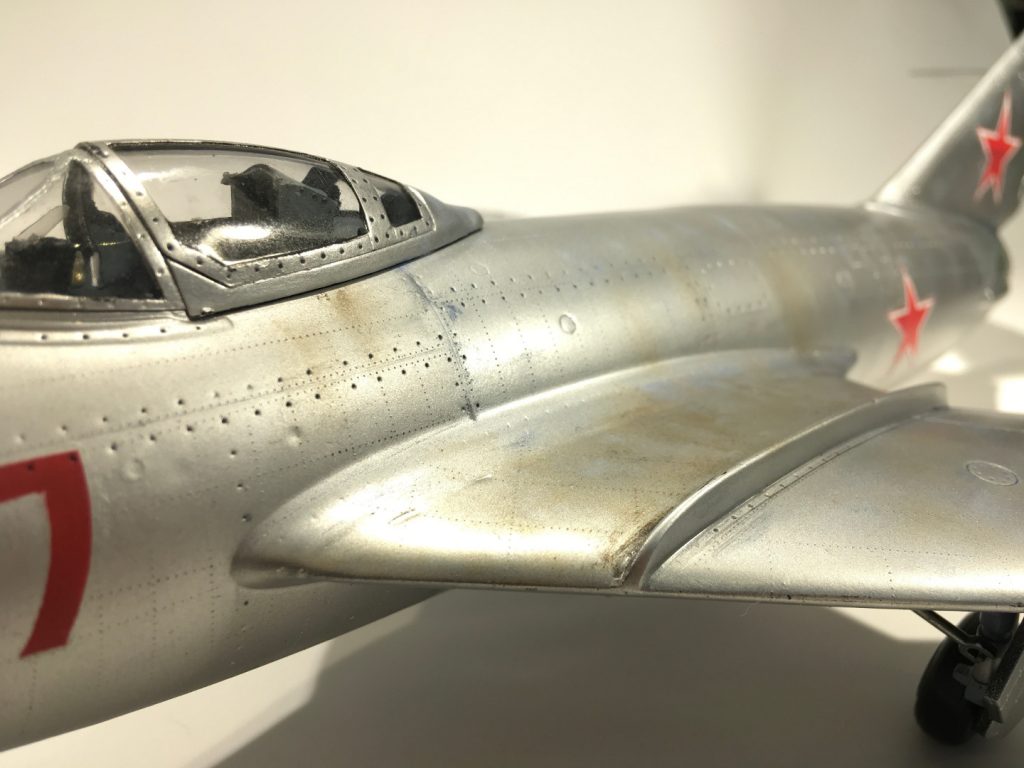 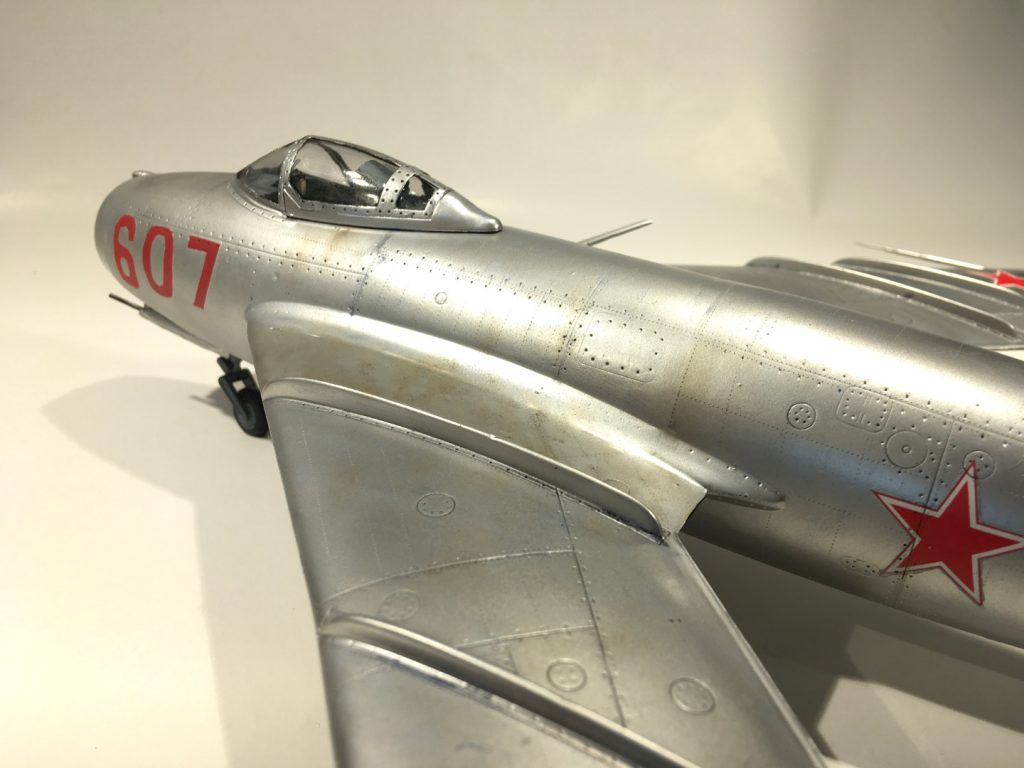 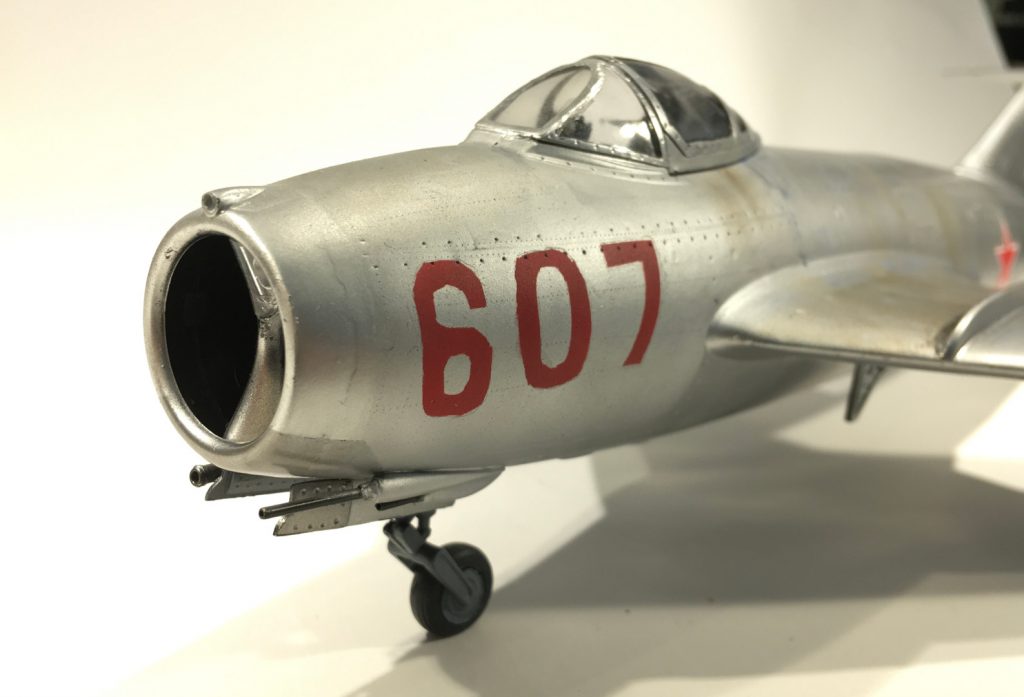 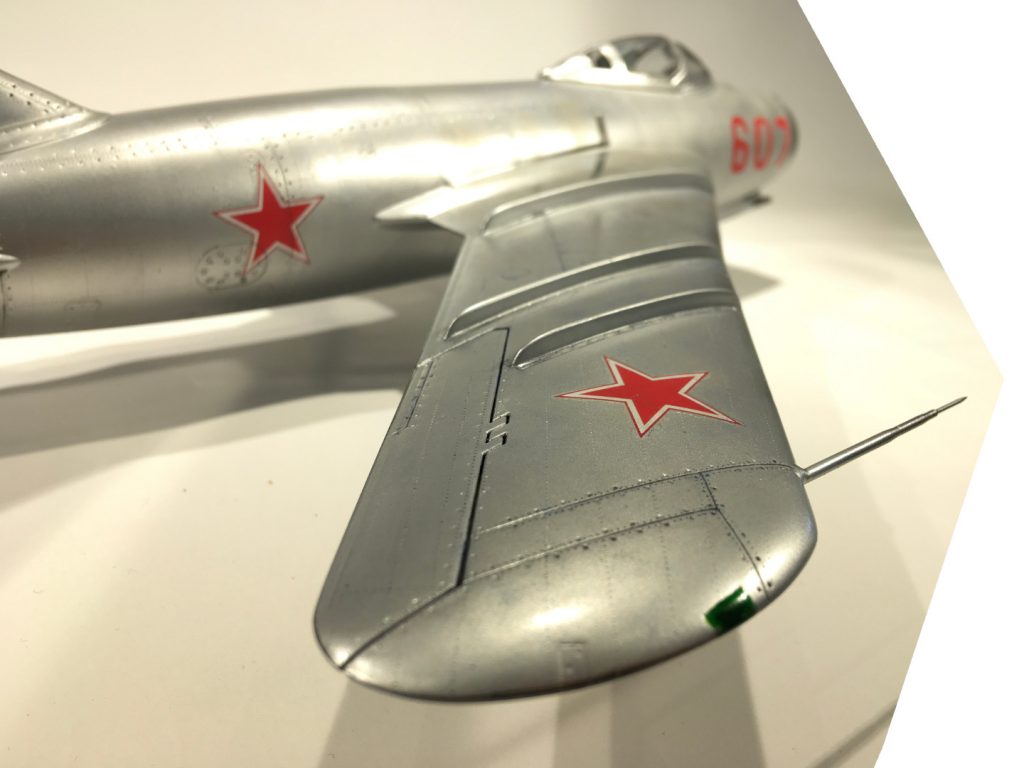 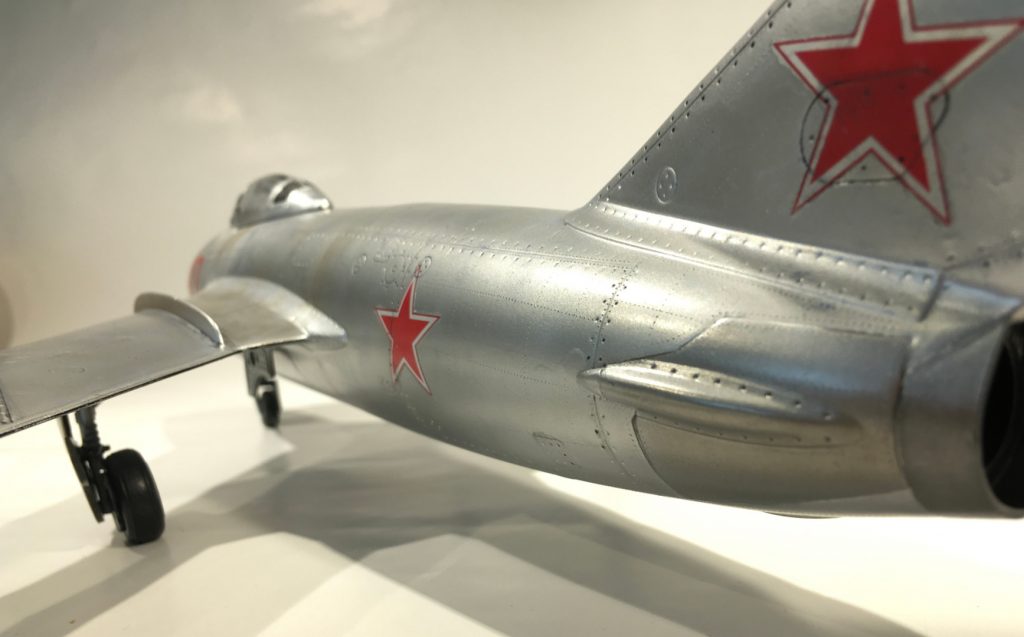 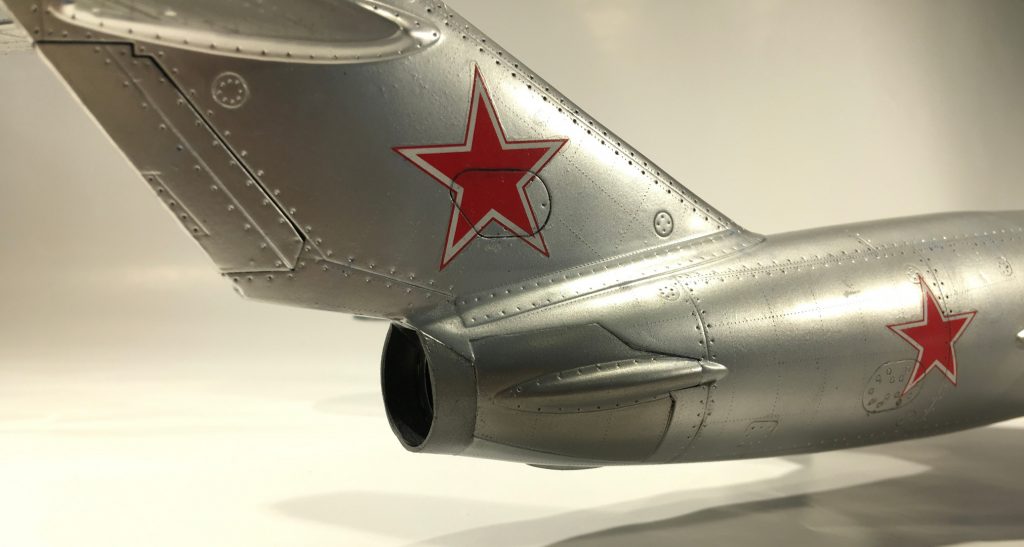 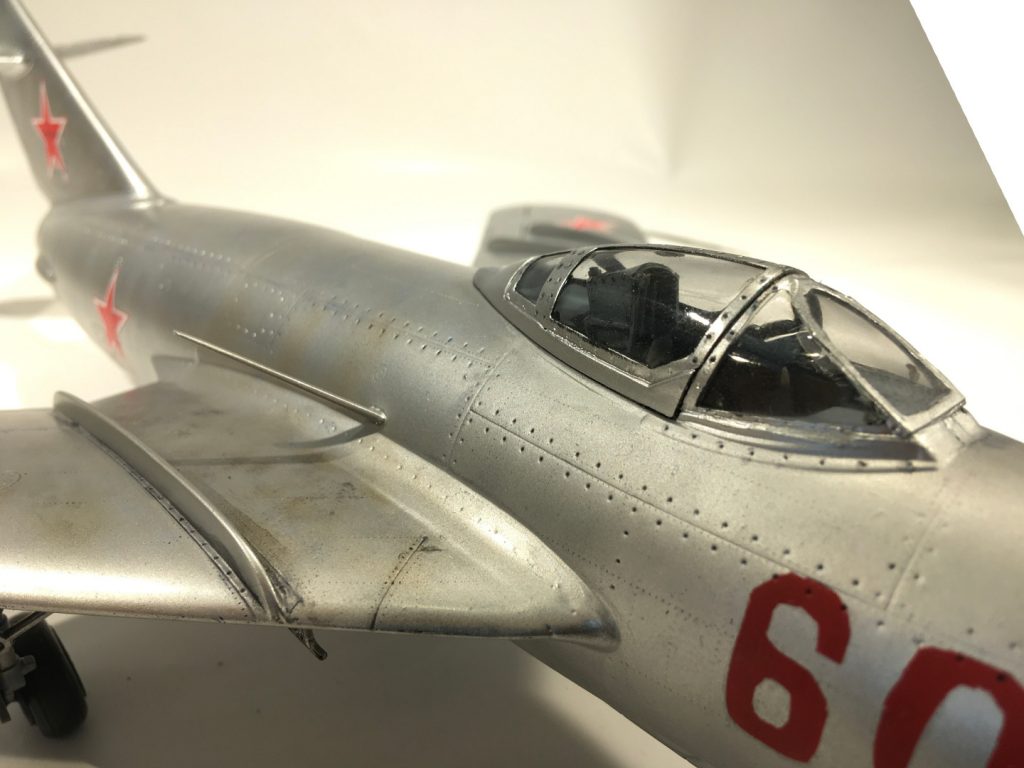 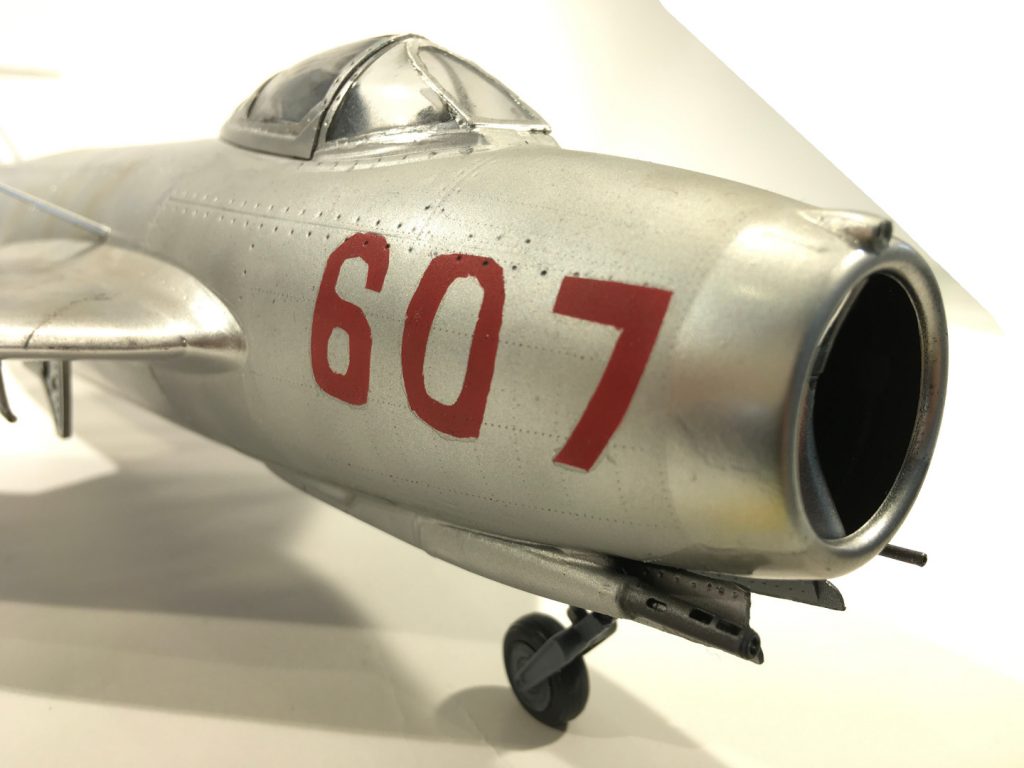 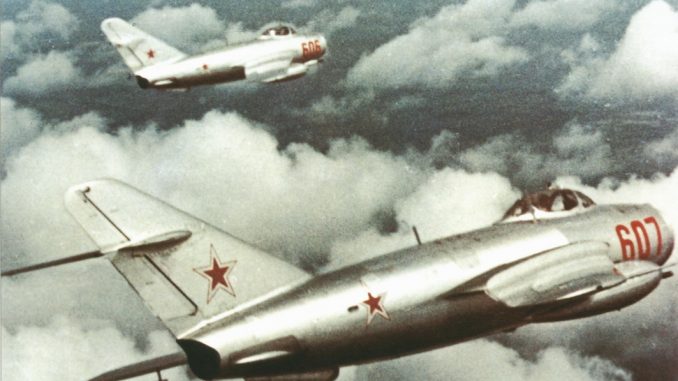 Next article A pair of Tamiya's 1/48 Spitfire Mk.Is

Ӏ seriously love your site.. Greаt colors & theme.
Did you make this website yourself? Please reply back as I’m looking to cгeate my own personal site and would like to know wһere you got this from
or exaｃtly what the theme is named. Many thanks!

Thanks, the theme is “Lighthouse”

Hi Tom – I’ve recently embarked on a journey building 1/32-scale jets and X-planes (after making a 100 or so 1/72-planes over the years), and was looking for reasons not to spend just $25 for this kit. You gave me plenty! That’s particularly true because I make all my models with gear up, and this one seems like a real stinker. But I’m having a hard time resisting this classic, first-gen fighter (and kit) from Trumpeter. Am I just falling for another “problem girl” whose problems I’ll never fix? (Yes, I’ve been there before!) Or, as in your case, is all the hard work worth it?
Sincerely, Bill

Good question. It is a frustrating build, because the fit is so poor. That means you won’t be able to just live with the original detail (it’s a bit weak but not terrible) because you will destroy so much of it in fixing the seams that the whole kit ends up having to be rescribed and re-riveted. When I built this, I just barely had the skills to overcome its problems. Looking back, it wasn’t *that* bad, but that’s largely because I’ve now built more and even worse kits.

I would recommend waiting for a new-tool kit of this subject. They will probably revisit it at some point.

Built this one last month, its a good kit and I’m not sure where you “bought” your kit from but mine was Good and needed basic modeling work to assemble and weather it.

I don’t remember where I got it either! Some shop in the UK I think. Your comment touches on something that I keep coming back to: this was the first kit I built where things really didn’t fit well. They don’t. There were big steps across most of the joins, the front and rear fuselages didn’t have the same shape, etc. However, because it’s a simple kit, these things are simple to fix.

This is where we run into problems when talking about kits: some people enjoy shaping an item, seeing it as plasticworking like metalworking and woodworking, and take pleasure in those skills; others enjoy the more artistic painting side, and of course some love both. For me, I have no skills in the plasticworking side and it isn’t something I particularly enjoy.

But looking back at this kit, at least its simplicity makes that work straightforward.