An imposing kit of an important aircraft, Trumpeter’s C-47 is lovely and frustrating in equal measure.

Fit: Good on the big bits, but the interior struggled to align well

Engineering: Disappointing.  The interior was a house of cards with many parts that all need to align perfectly for the fuselage to close, but which form an unsupported house of cards.  The wings were provided with solid supports to hold the outboard parts in position, but these don’t give as strong support or clear alignment as might be desired.  Landing gear are very fiddly indeed.

Detail: Fine, with panel lines and rivet detail over the entire surface.  These could benefit from being both finer and more abundant though.

Accuracy: No issues noted, looks good against photos available, allowing for detail differences across the production and service history. 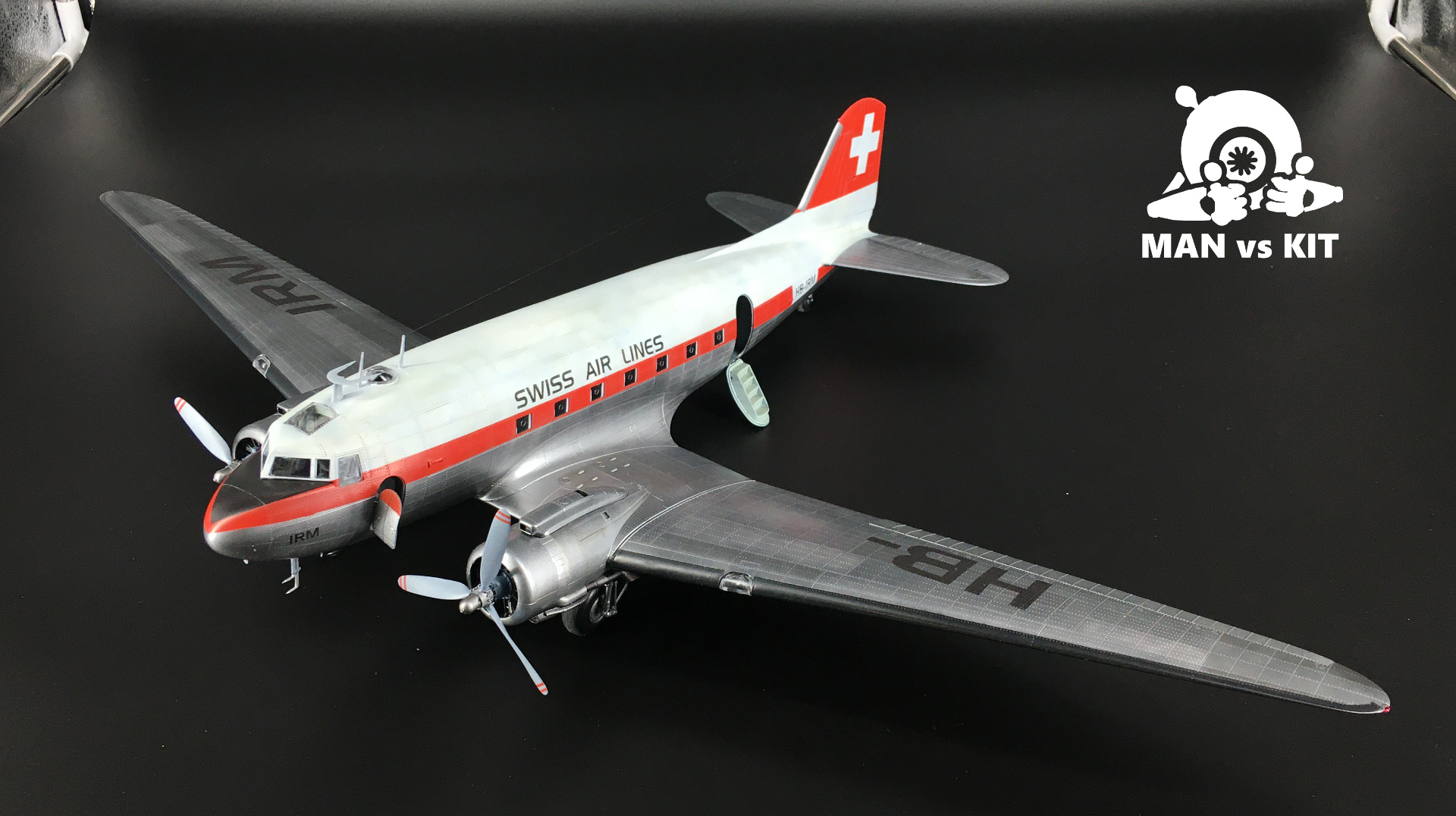 One of the most significant designs in aviation history, the DC-3 first flew in the 1930s as a pioneering airliner, and in some parts of the world remains in commercial service almost 90 years later.  Along the way it provided war-winning logistical support and restarted commercial aviation.

I chose to do this attractive Swissair scheme partly from having grown up in Switzerland, and having previously failed to bring the Italeri / Revell 1/72 kit up to scratch shortly after starting Man vs Kit.  I think I’ve mentioned before, that I opened with the Su-35 and then got stuck in the DC-3 and ICM 1/48 Spitfires, all of which became paint mules, before building the Fine Molds 1/72 Millennium Falcon and messing up its paintwork, leading to that getting stuck on a shelf for most of a year.  I’ve had this kit since then, as Tim Lowe, a fellow member of SMCG, very kindly gave me it having seen the mess the 1/72 one got into.  I have been reluctant to build this one until I was sure I could do a decent job of it.  Sean at Topnotch masks cut these custom masks for me at the time, which are excellent and use the actual Swissair font. 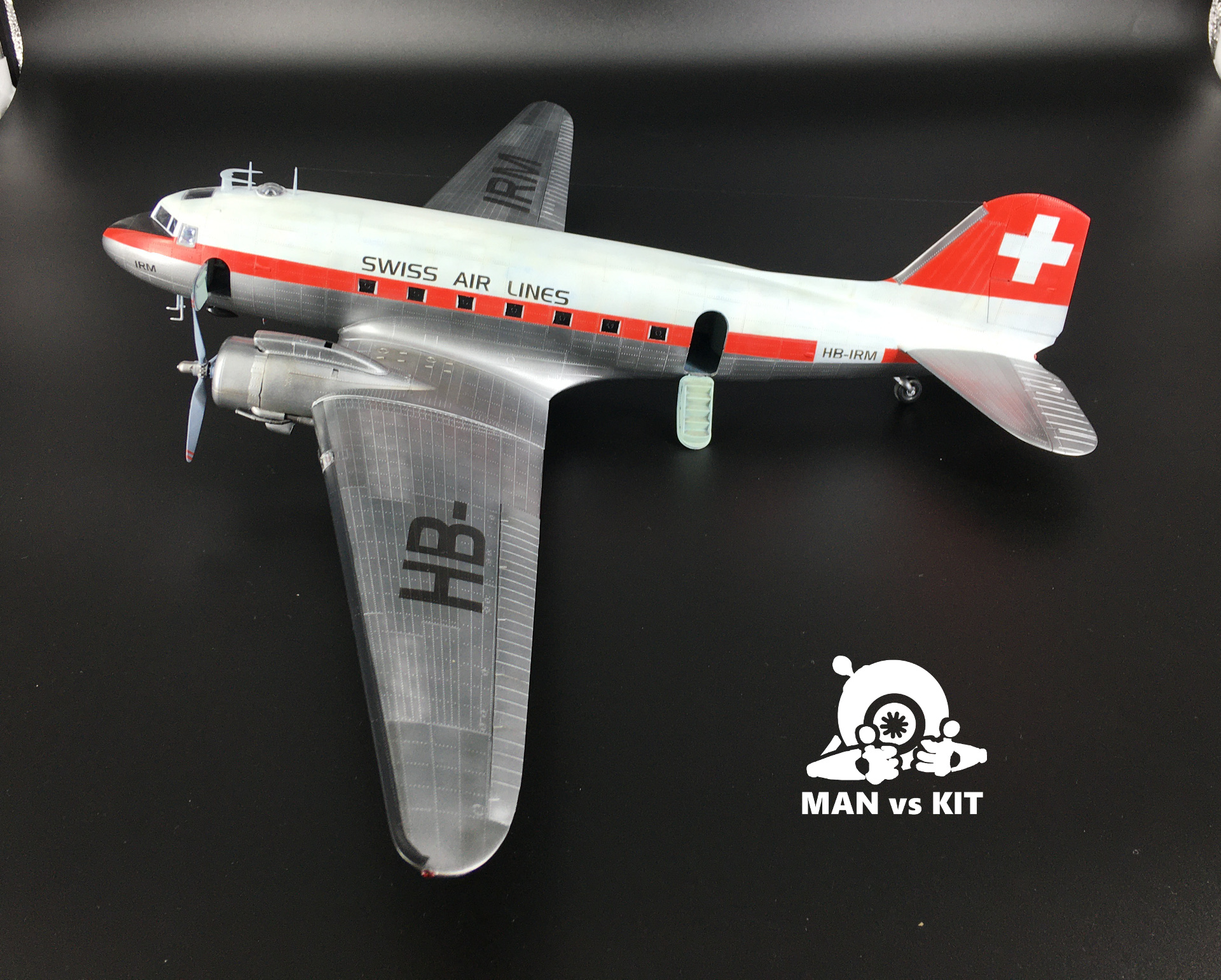 Swissair used the DC-3 from 1937 to 1969, and during that time operated a range of variants in a multitude of schemes.  The original 1930s scheme was all-over bare metal with a red tail.  During the war this was supplemented with large red and white neutrality bands on the wings and fuselage.  Postwar a red stripe with white centre was added along the window line, followed by the addition of a white roof, and finally the stripe became entirely red.  Swissair DC-3s can still be seen, with several in museums (Dubendorff is well worth a visit) and even a flying example (HB-ISC) which takes passengers.

As the Trumpeter kit represents a wartime C-47 albeit in passenger configuration, I chose to model HB-IRM which was a former military aircraft.  There are likely to be some differences but with relatively limited references it looks close enough.  The biggest concern is engines (which is unclear for all the Swissair examples) and the presence of the astrodome: we know this was fitted to wartime aircraft and later deleted, but some photos in postwar civilian service suggest this may not have been done immediately.  It’s unclear and removing it would have been a major pain, so it stayed.  The only other noticeable change I made to the model’s structure was shortening the pipes on the front of the exhaust.  I’m not sure what purpose this served, perhaps some cooling of the exhaust air.  In photos the HB-IRM appears to have them, but they are short and lack the big scoops of the kit parts so these were cut down.  After being sold off by Swissair in 1961, this aircraft continued to fly, first in Morocco and later in the US, before being written off following storm damage in Reykjavik in December 1980 (http://sr692.com/). 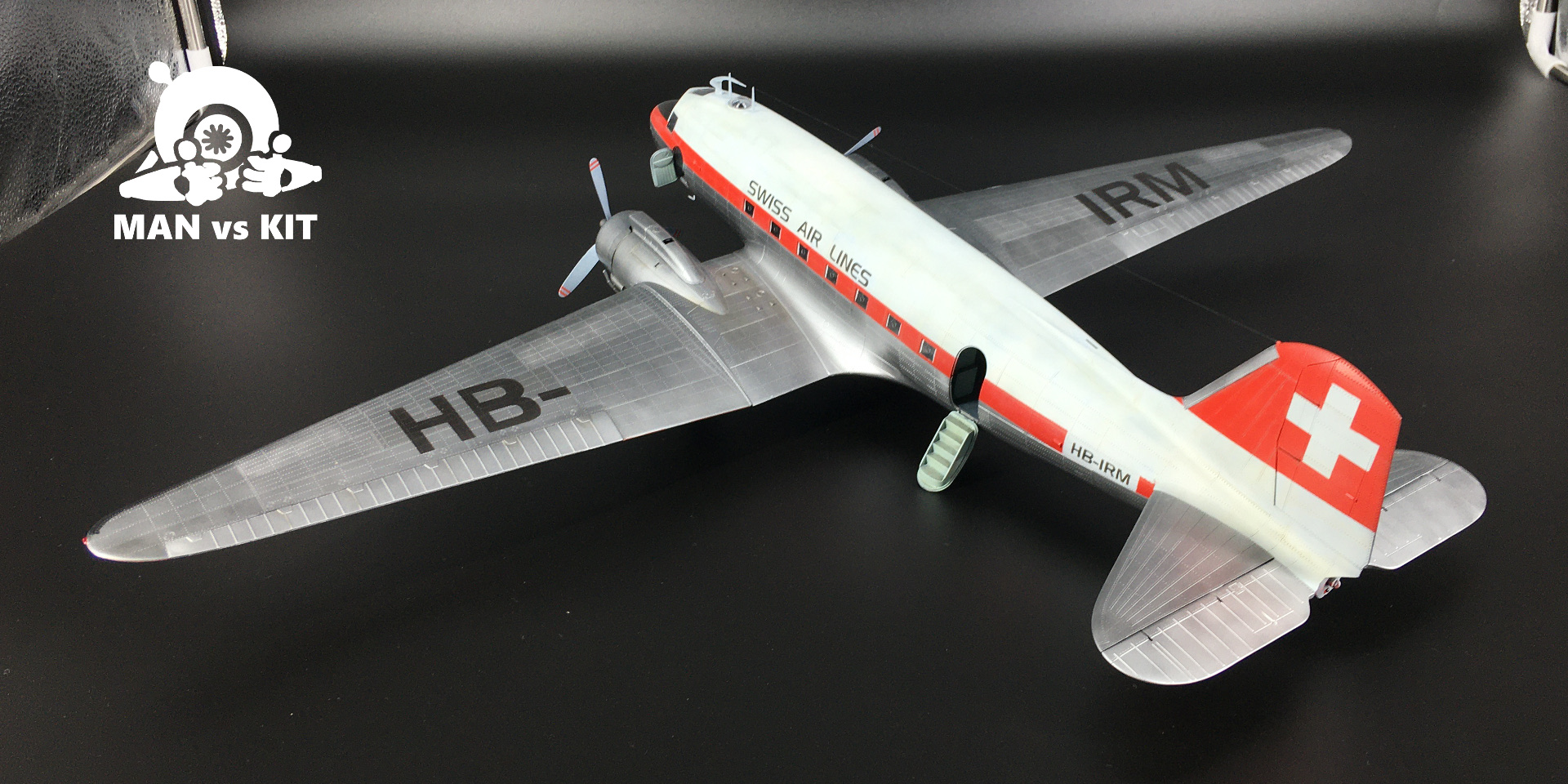 Trumpeter provides a reasonably detailed flight deck, passenger compartment, and crew area filled with radios and other equipment.  You might think these will not be highly visible, and you would be correct.  The flight deck is slightly visible (I have at least been able to take photos of it) through the cockpit windows and skylight, the passenger compartment is minimally visible through the windows and rear door (in that you can see seats exist, but not the careful colouring or the posing of the seatbelts), and the crew area is not visible at all (which is a relief as I assumed that and thus did no work on it).  However one detail that shows up far more effectively than expected are the little curtains I added on the inside of each window pane.  Speaking of the windows: those circular marks must represent some artefact on the real thing, right?  Surely they wouldn’t put massive ejector pin marks on every one of them?  Right? 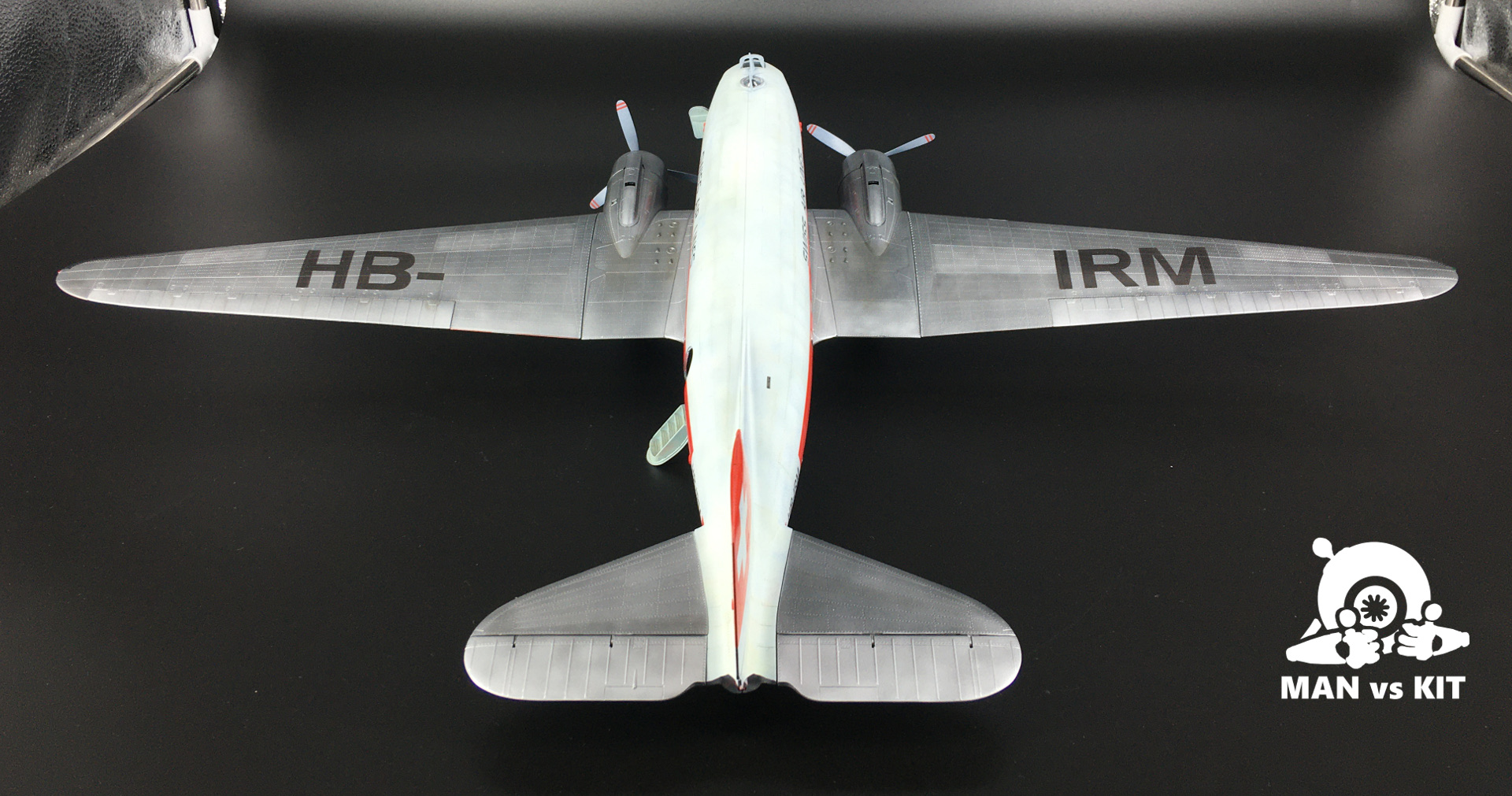 The kit goes together without too much fuss, though this is more thanks to most of the construction being a few very large parts than because everything works well.  The large parts fit quite well, but the problems arise from the interior.  There are three large bulkheads at the front of the fuselage and another at the rear, which all have to sit neatly inside the fuselage for it to close.  The (invisible) crew area structure is supported by these bulkheads which are assembled as part of the floor rather than lying against the fuselage halves.  Thus it is very easy to not realise that a part is sticking out a bit awkwardly because you can’t see where any impingements will happen until you close the fuselage, at which point you literally can’t see inside.

The wing / fuselage join does nothing to help you.  The with is assembled in three parts: the two outboards, and the centre including the engine nacelles.  This latter is formed from a single piece underside and two top parts which are each sandwiched between an outboard and the fuselage.  The problem is this forces you to decide which join you want to prioritise.  I chose to worry about the wing leading edge, which is easiest to fix without the fuselage present, so the wing tops were applied before mating to the fuselage.  This showed that the join to the fuselage wasn’t as neat as might be wished, but by that point it would have been asking for trouble (and sanding scuffs) to try to smooth the inside of a more-than-90-degree concave corner.  Probably a bad idea, but on the other hand if you attached those to the fuselage first, you would probably find the lower wing section doesn’t want to attach. 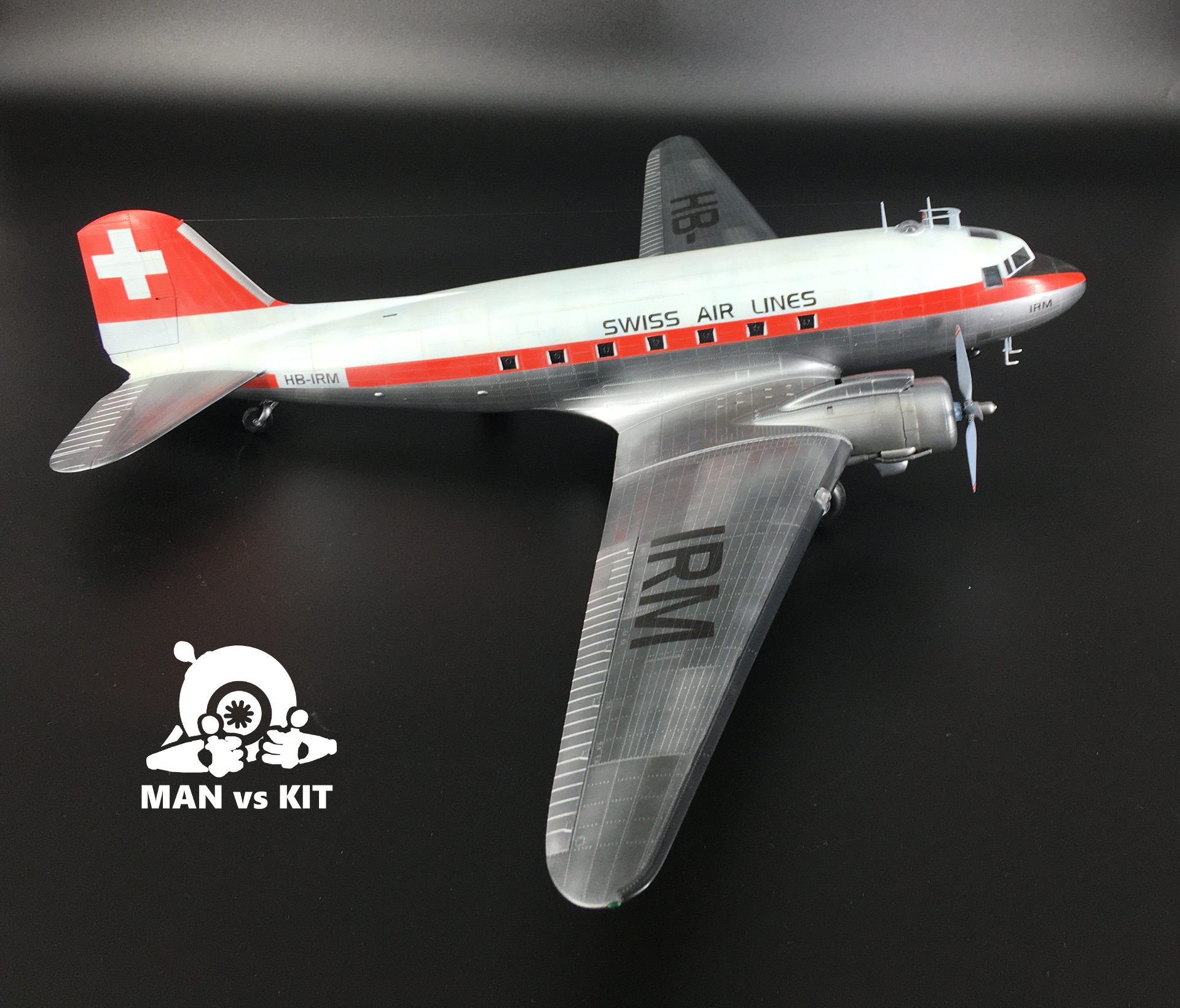 With a wingspan only 3m shorter than a B-17 (which equates to 6cm in this scale) this aircraft was always going to have an extensive amount of bare metal.  I’m still not quite where I want to be with getting bare metal to look right, but this approach of varying the surface panel tones by overspraying the duralumin is quite effective at showing a subtle shifting. 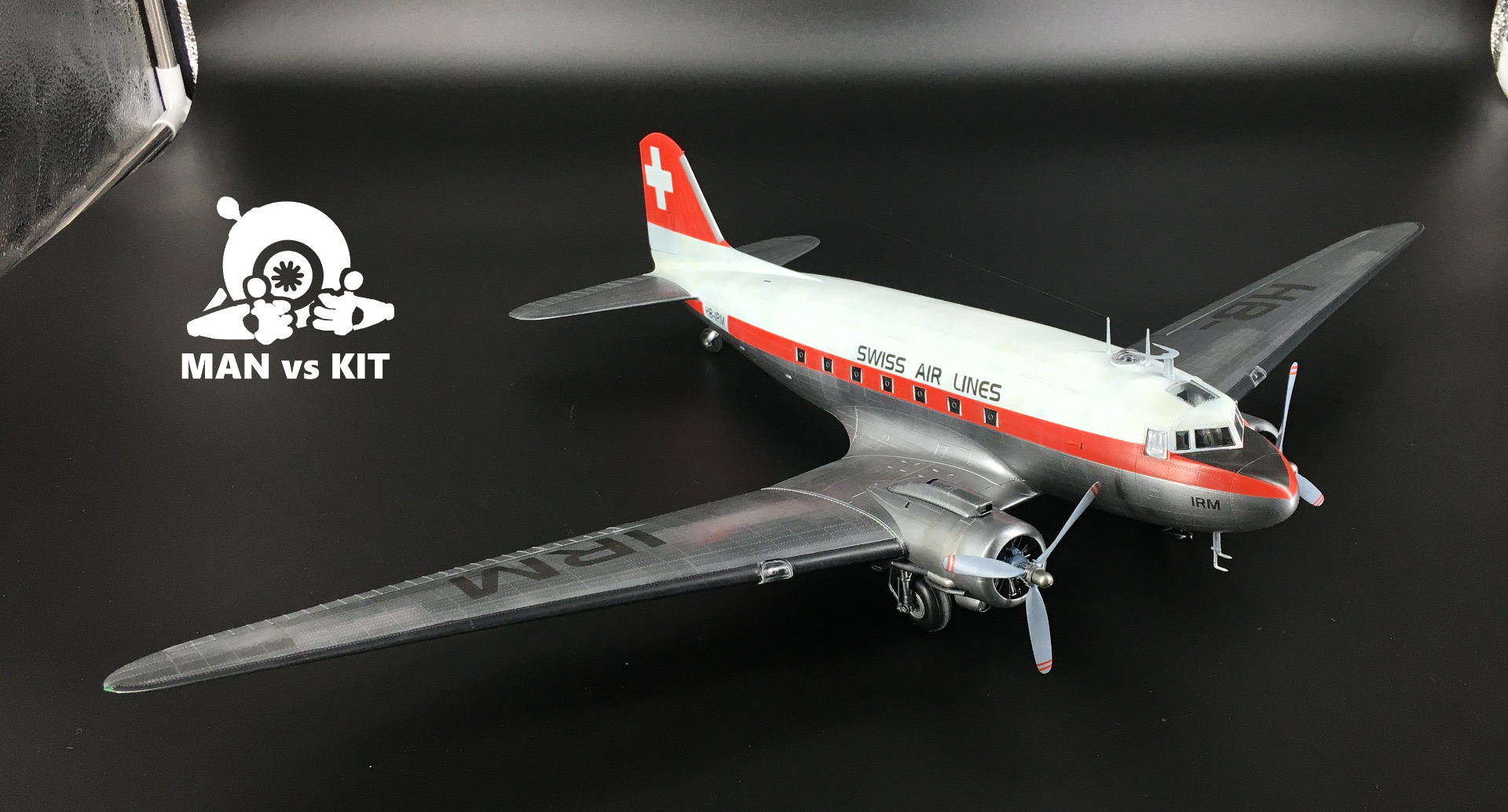 My biggest concern, however, was the large expanse of white on the roof.  This is a well-maintained Swiss airliner, so that white should be quite clean.  But, if you just do a pristine, uniform white coat, it tends to make the model look fake.  It’s a difficult area where you almost need to exaggerate how much colour variation there would be just to remind the viewer that there is some.  Further, that white is sitting next to bright red and bare aluminium: those provide a lot of contrast to the white and thus tend to flatten any subtle variations.

To provide a variation in tones within the white while keeping it subtle, I first sprayed Insignia White onto the black GX2 base, being sure to keep it a rough layer without too much opacity.  I then very carefully and lightly sprayed a few different very pale tones into darker areas in that rough coat, working to build up opacity in the dark areas to match the lightest white – remember that was laid down very roughly, so made about the darkness of a Medium Sea Grey.  Those tones included RAF Sky (yellow-green, Clear Doped Linen (off-white tan), a very pale blue which I think came from MRP’s IDF set, and a few others picked by looking through my paint racks for the palest colours I had.  The goal was just to put a bunch of different tones in so the final result wouldn’t all shift in one direction.  I then went back and blended it all together with Insignia White, aiming to finish just short of covering everything. 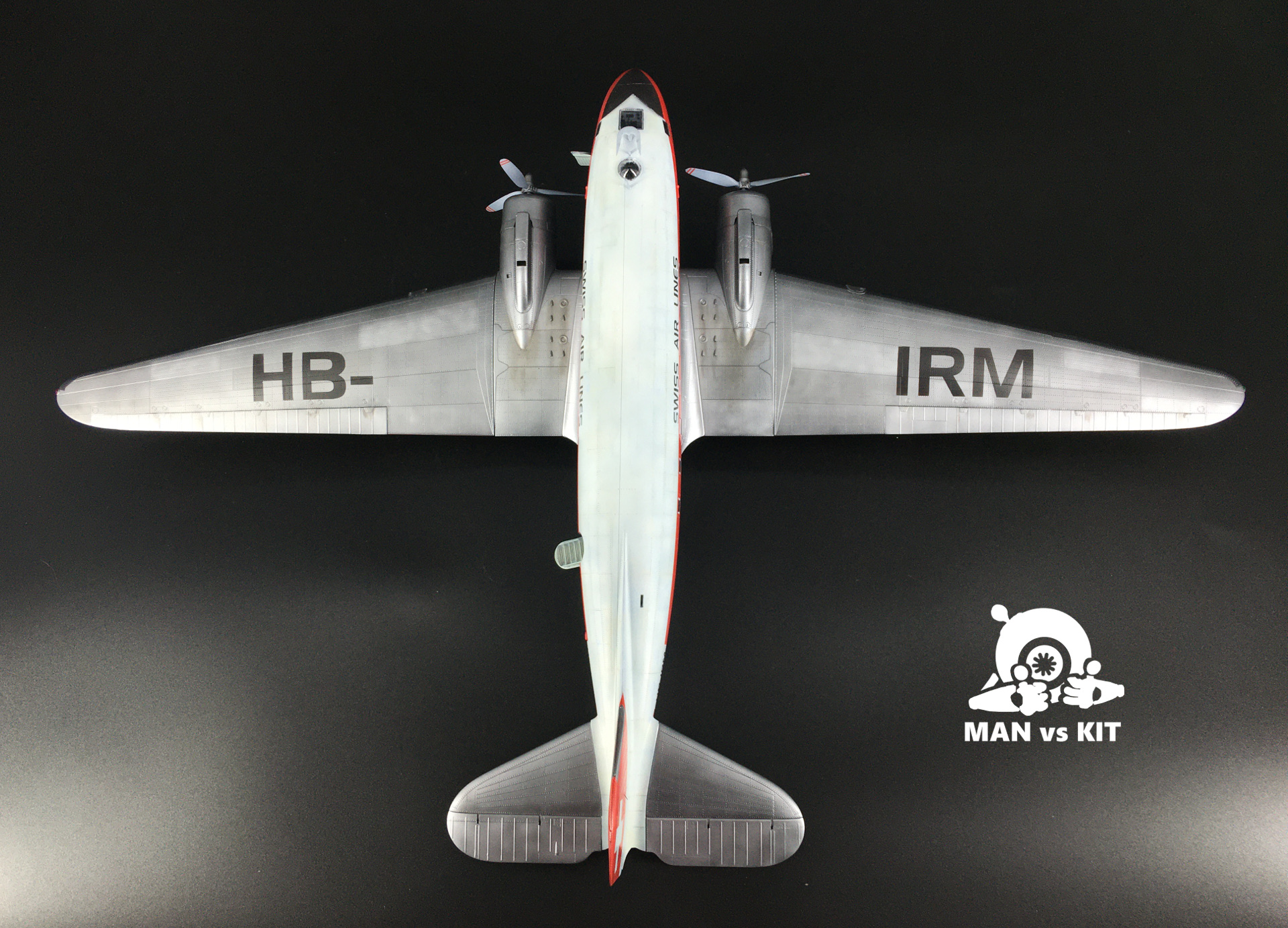 The red was also tricky, as none of the reds I have were a good match for the Swissair colour.  In the end I settled on a 50-50 mix of US Insignia Red and RLM 23, which I think isn’t too far away.

The stripes on the propeller blades were done with a cunning little mask that I’m rather proud of, and which shows the utility of the Silhouette cutter.  Each mask was a rectangle about 1x2cm, which contained two parallel cuts 1mm across, all held together by the mask outline.  Apply one of these to each side of each propeller blade and you have a really easy way to get nice, consistent, even lines. 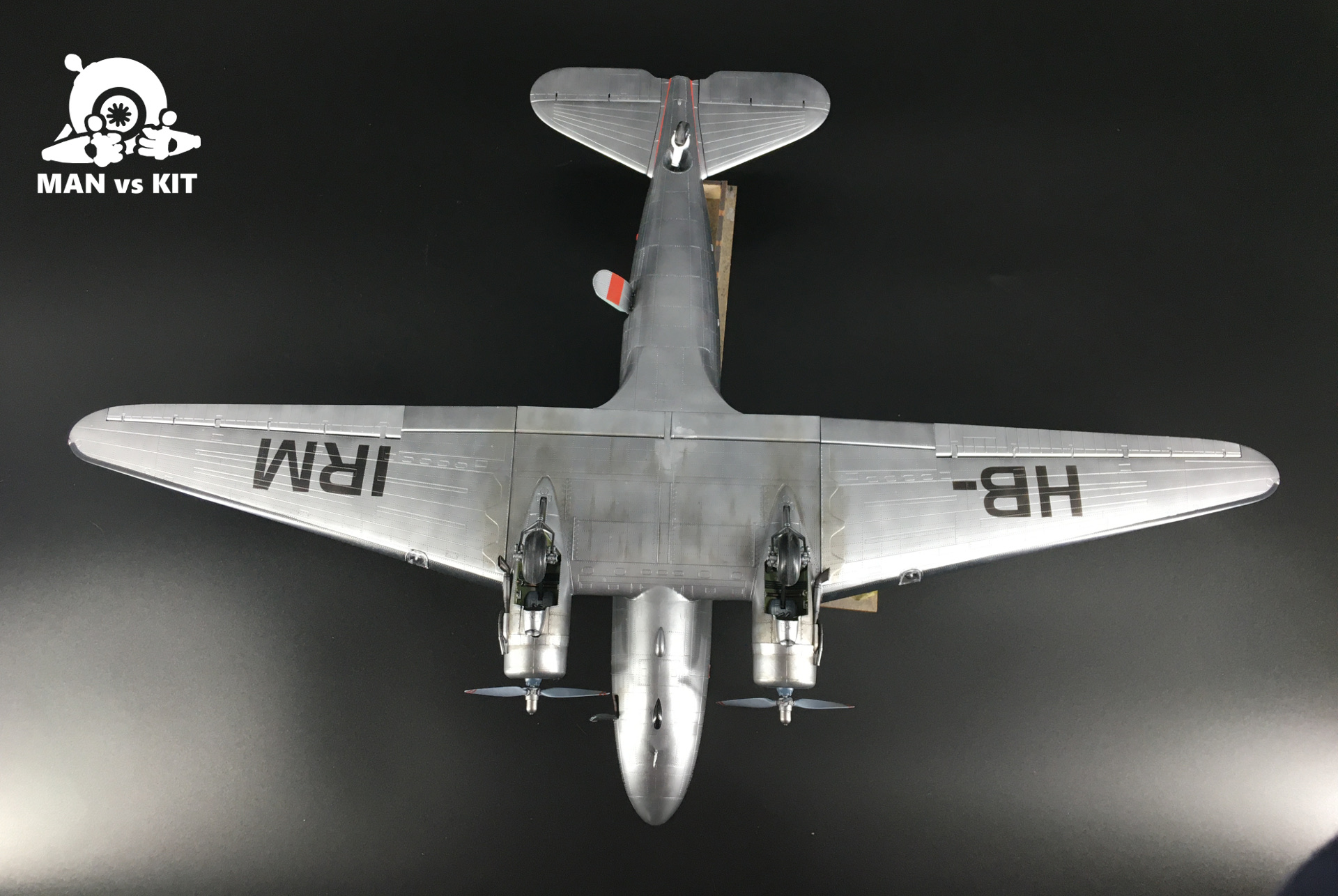 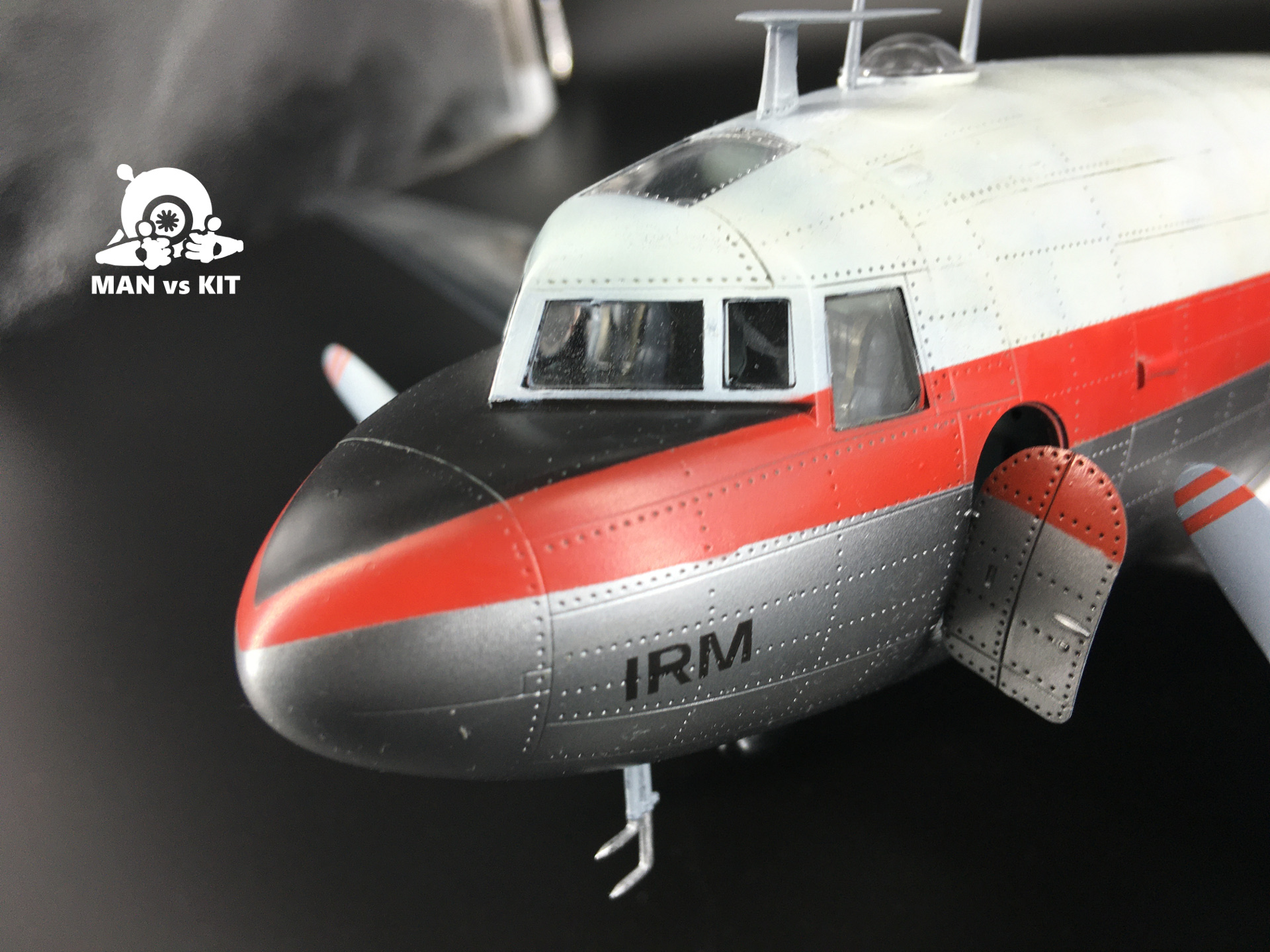 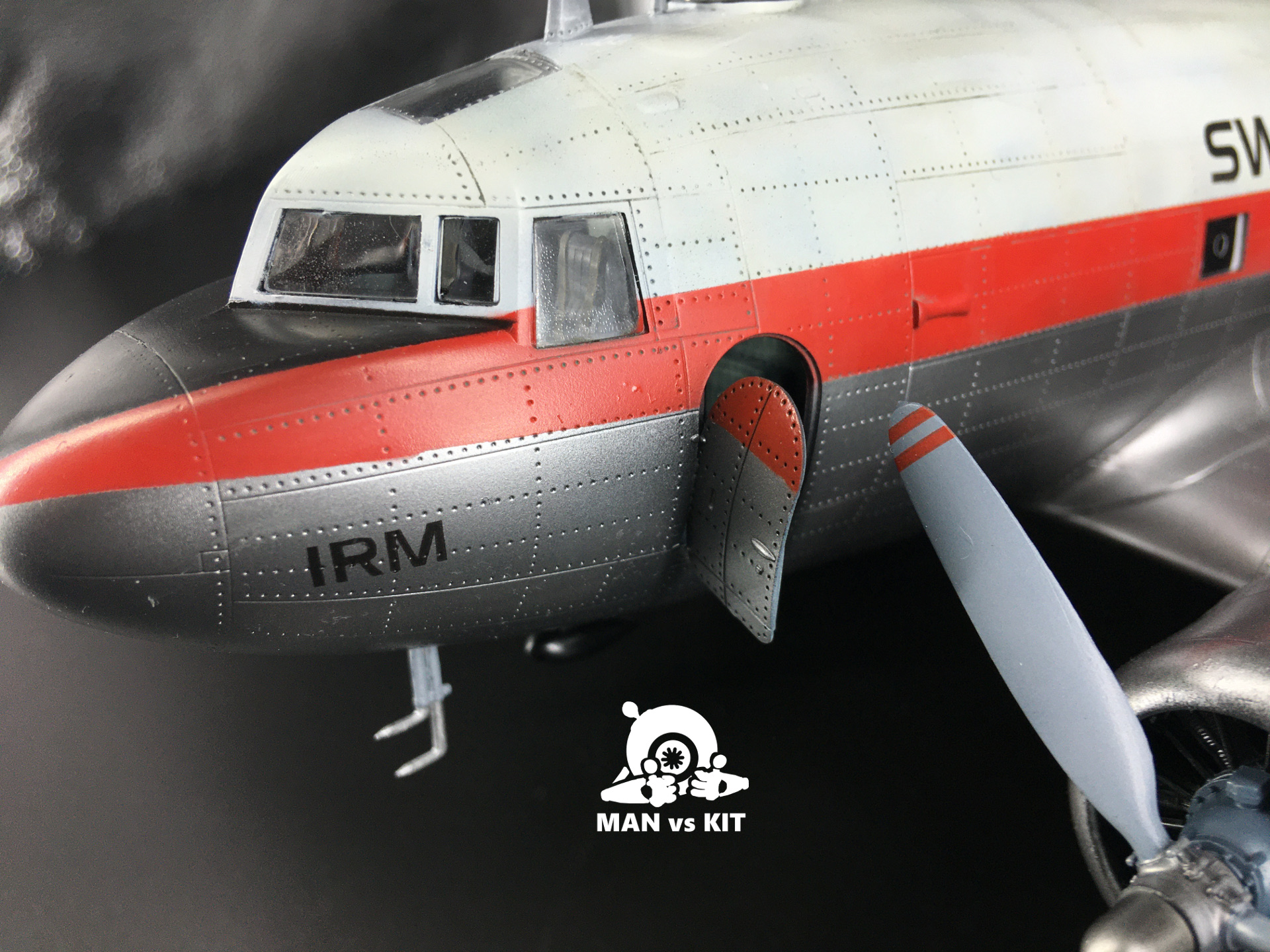 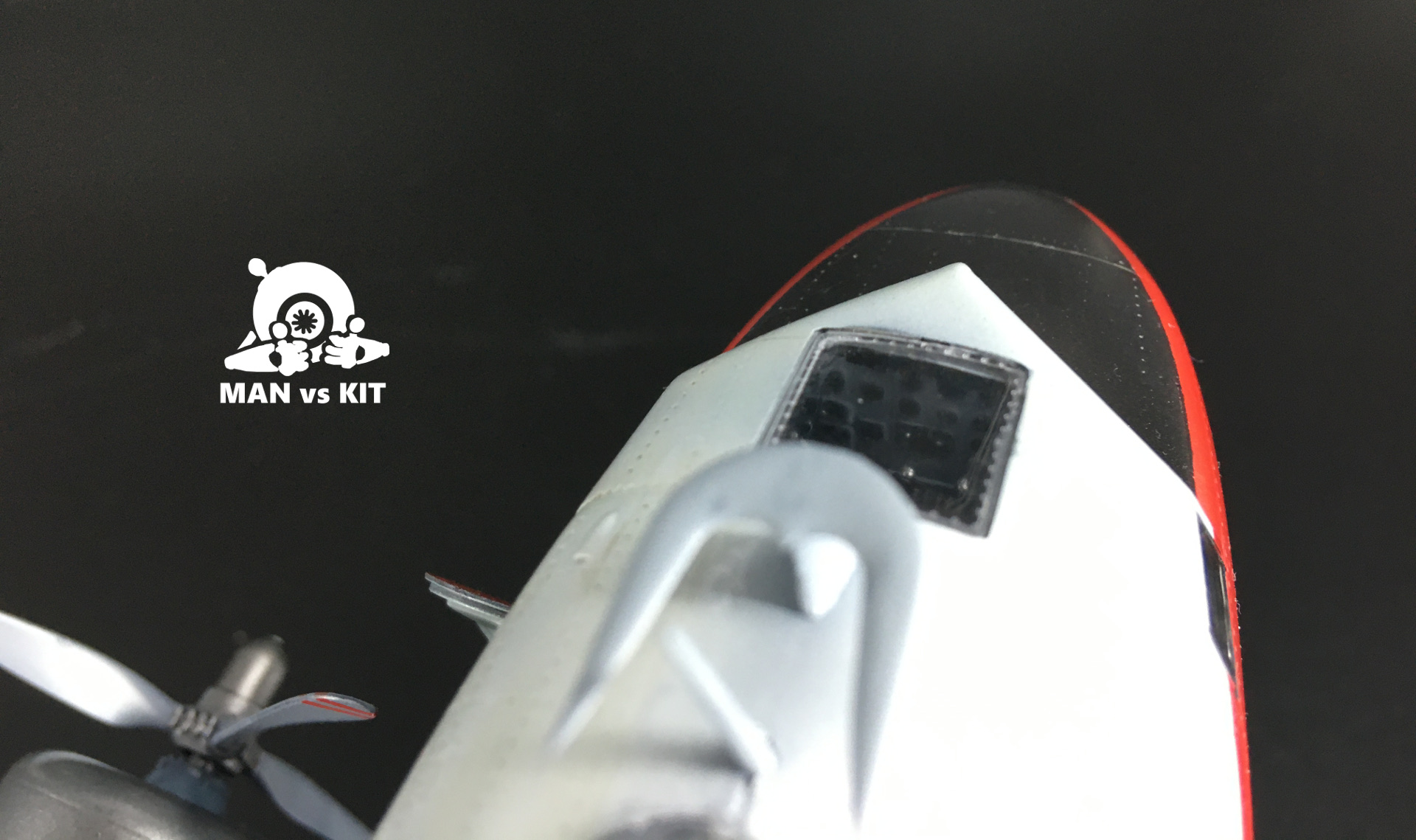 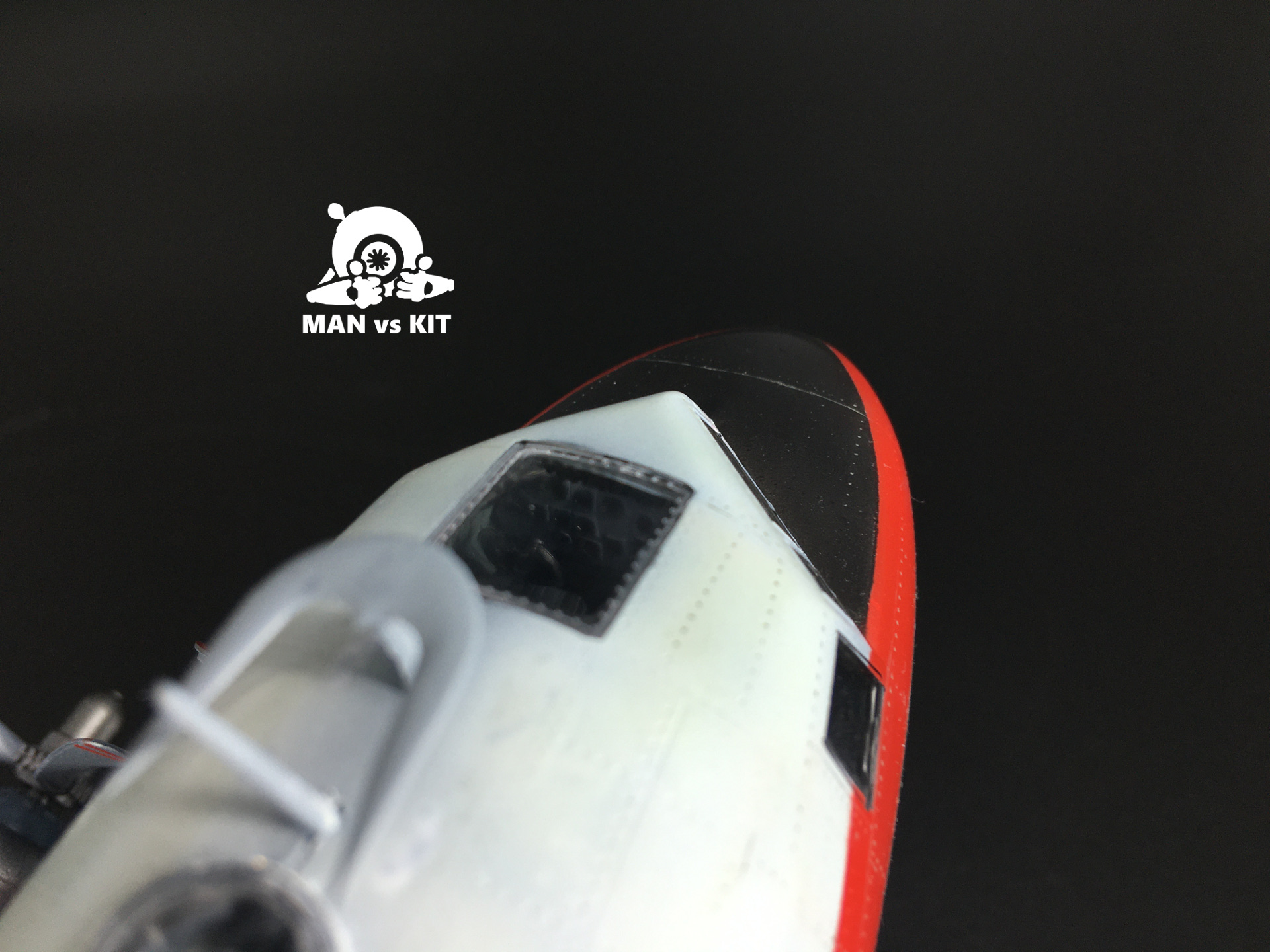 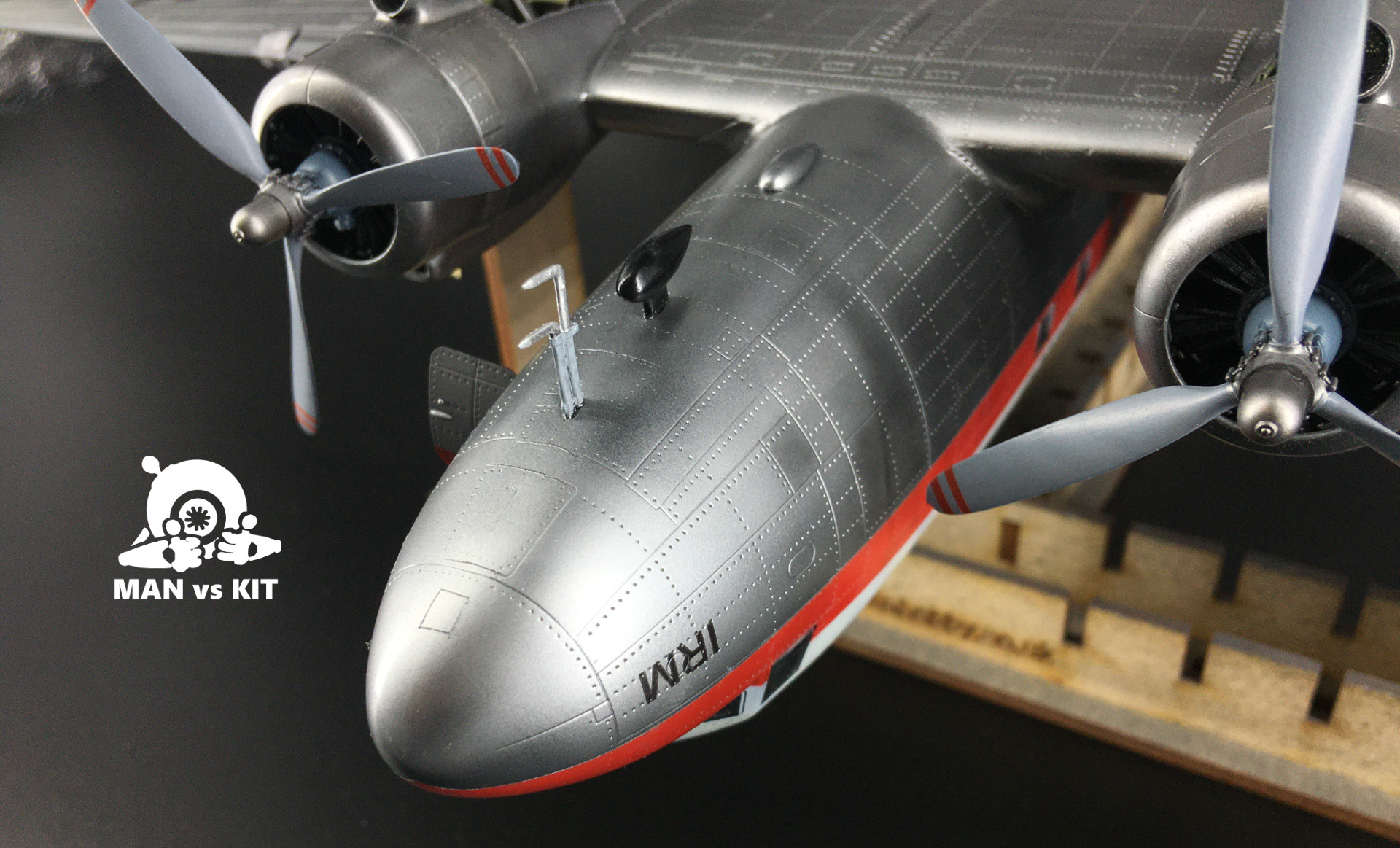 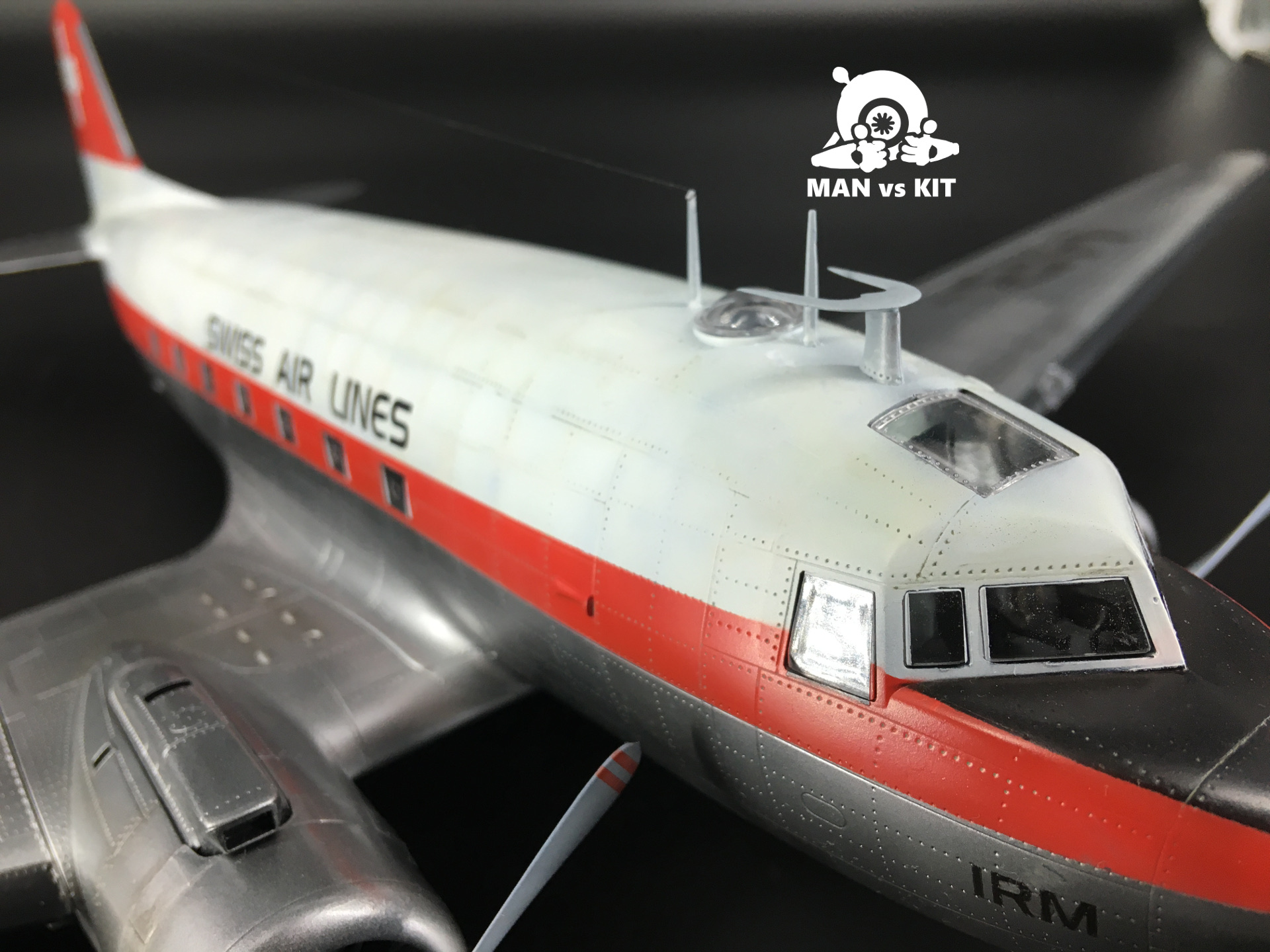 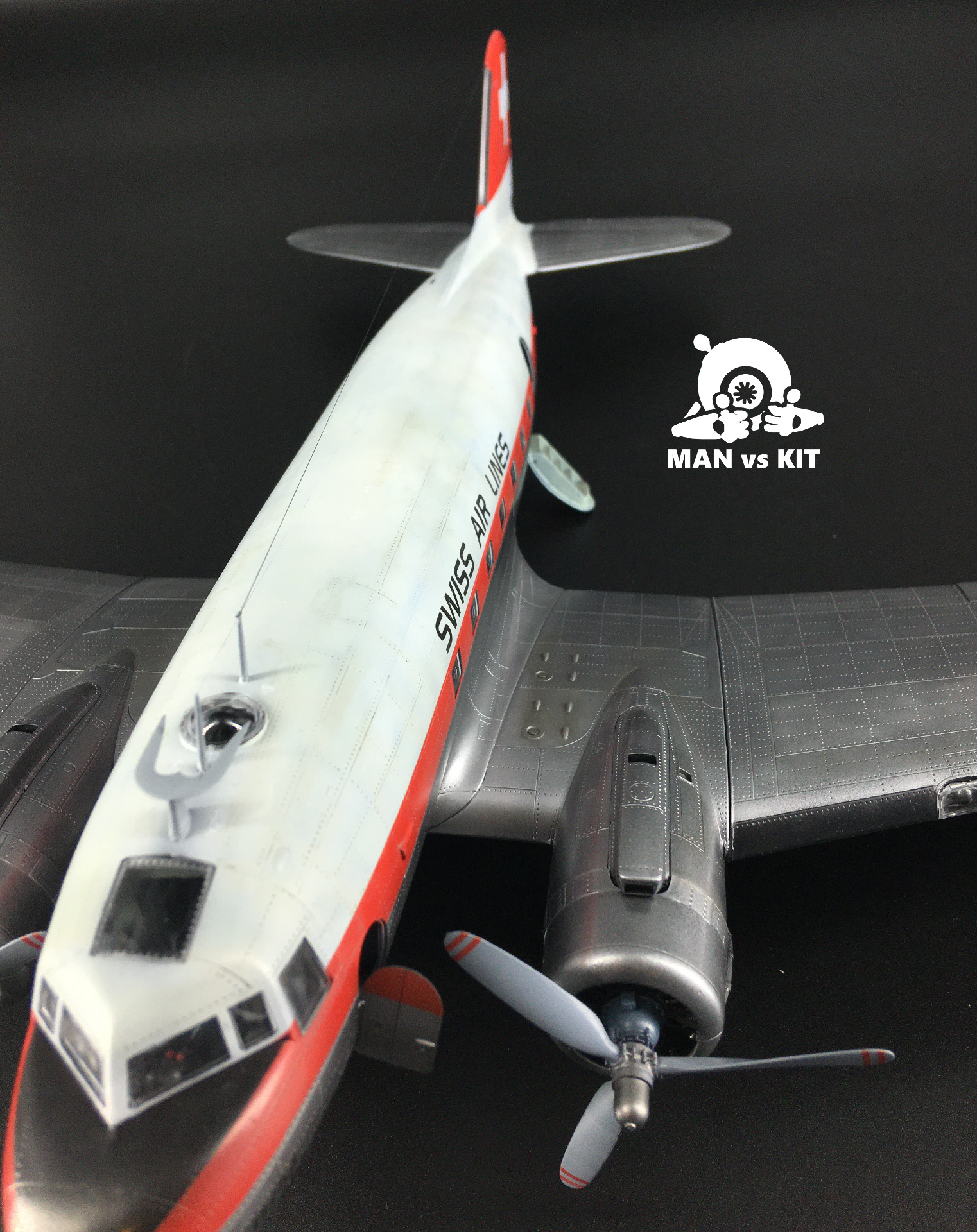 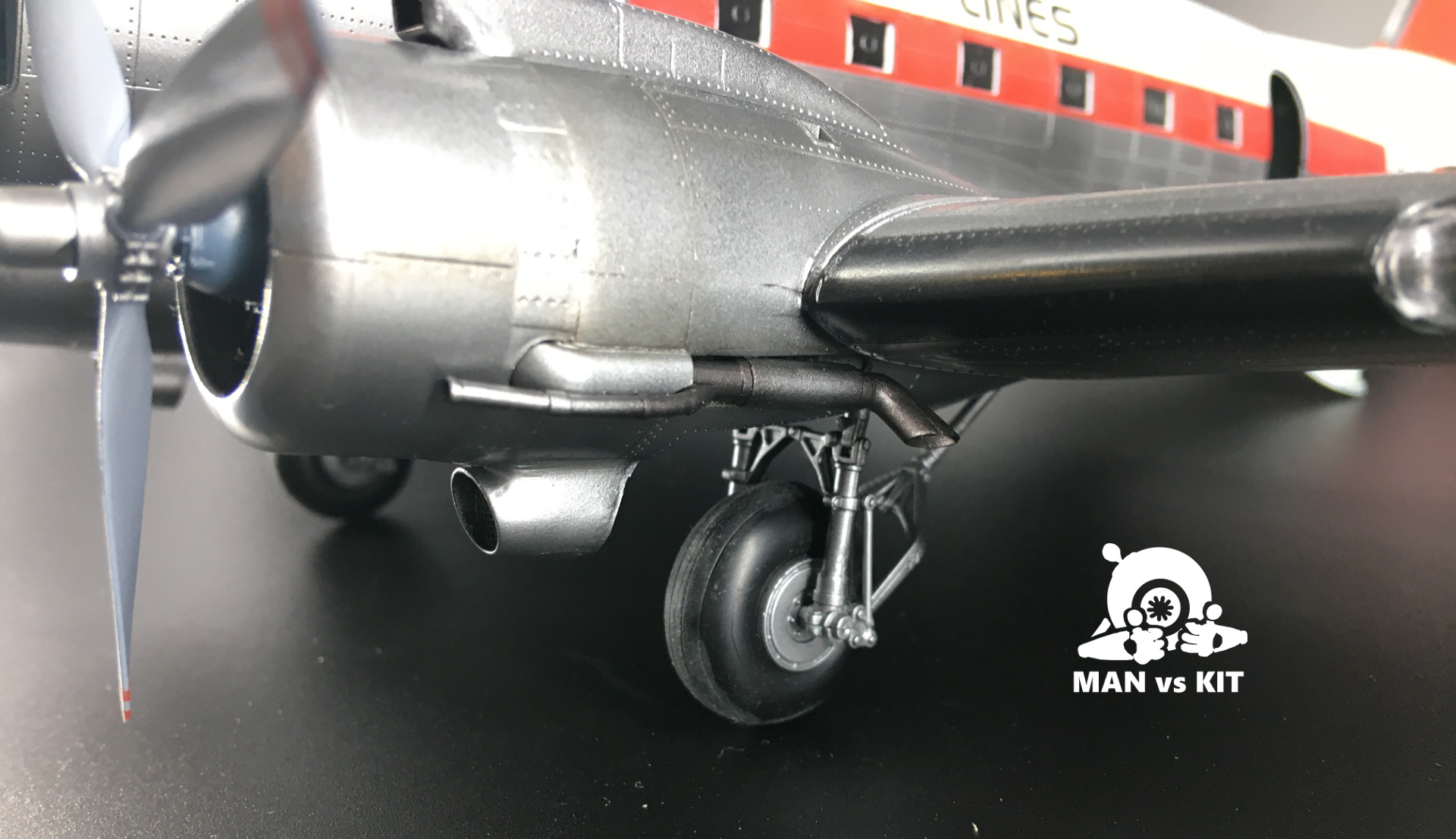 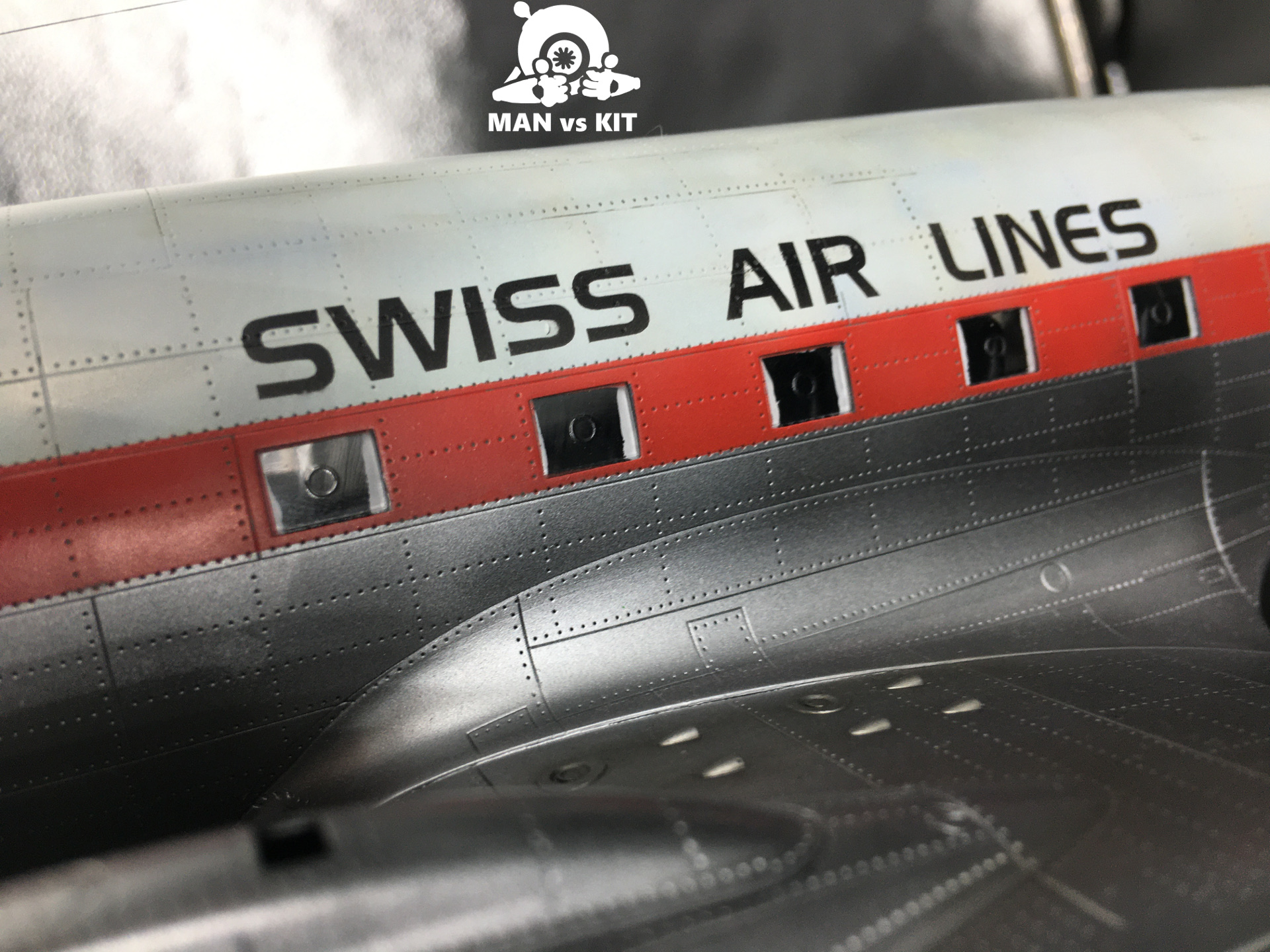 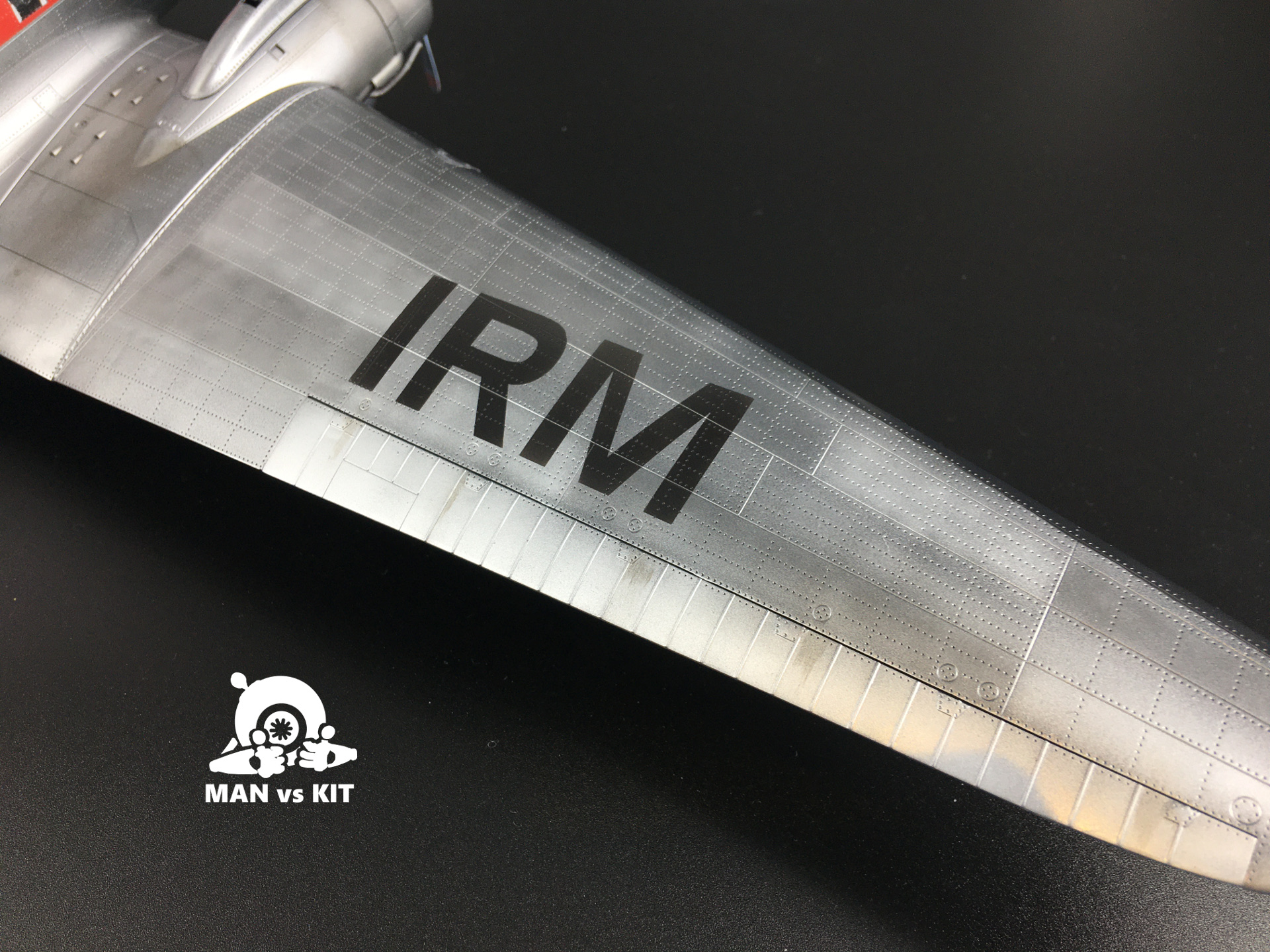 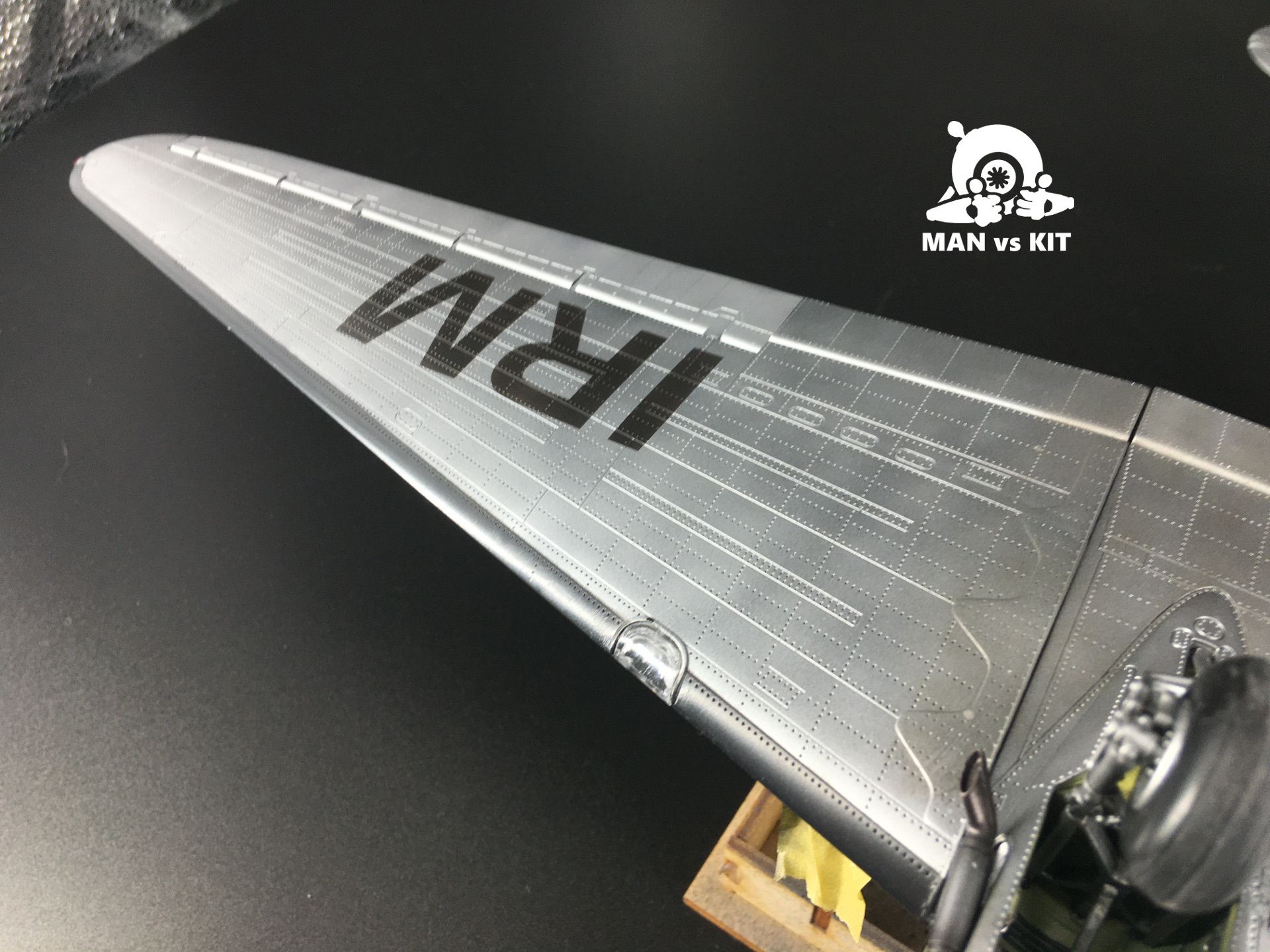 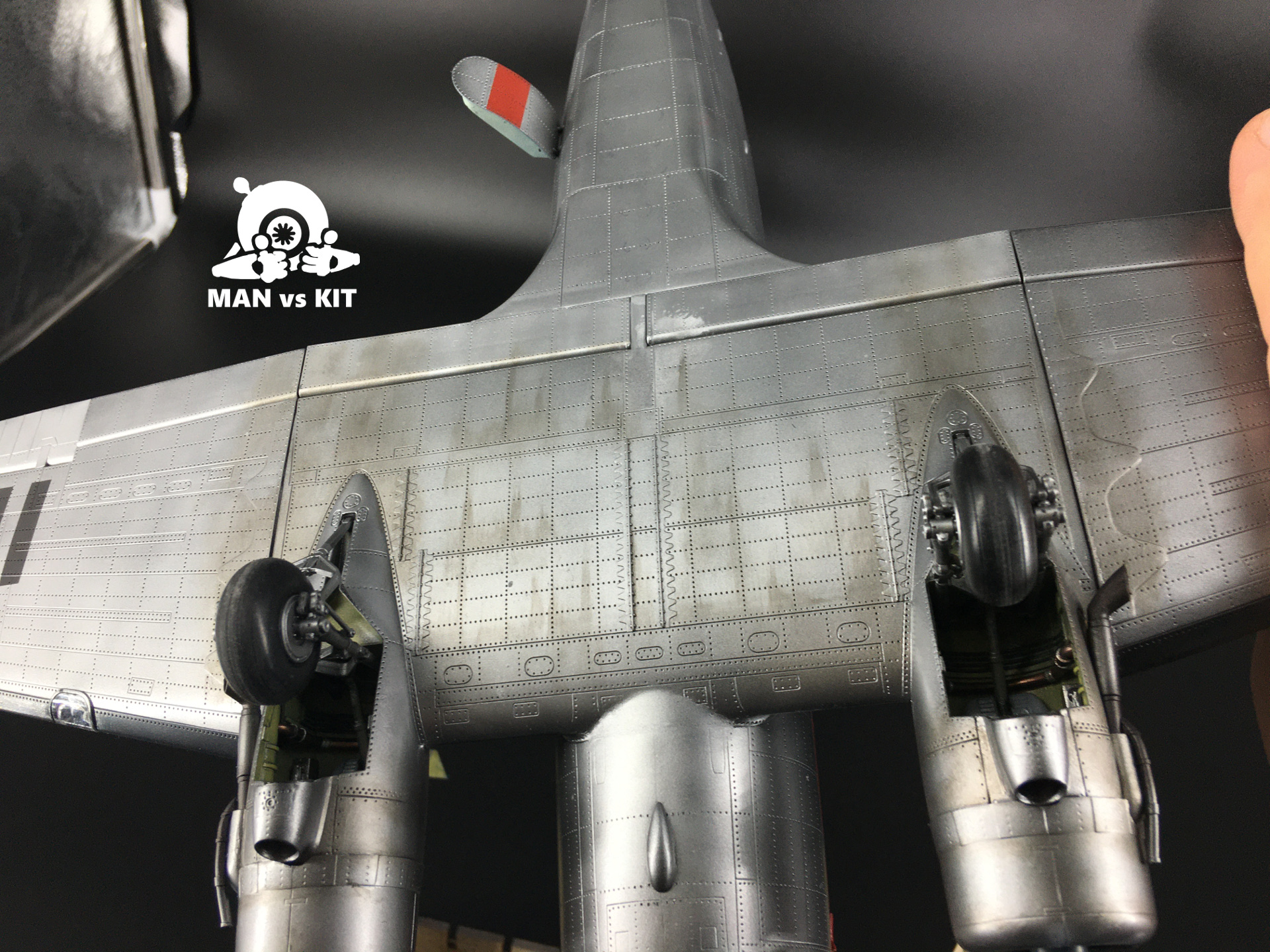 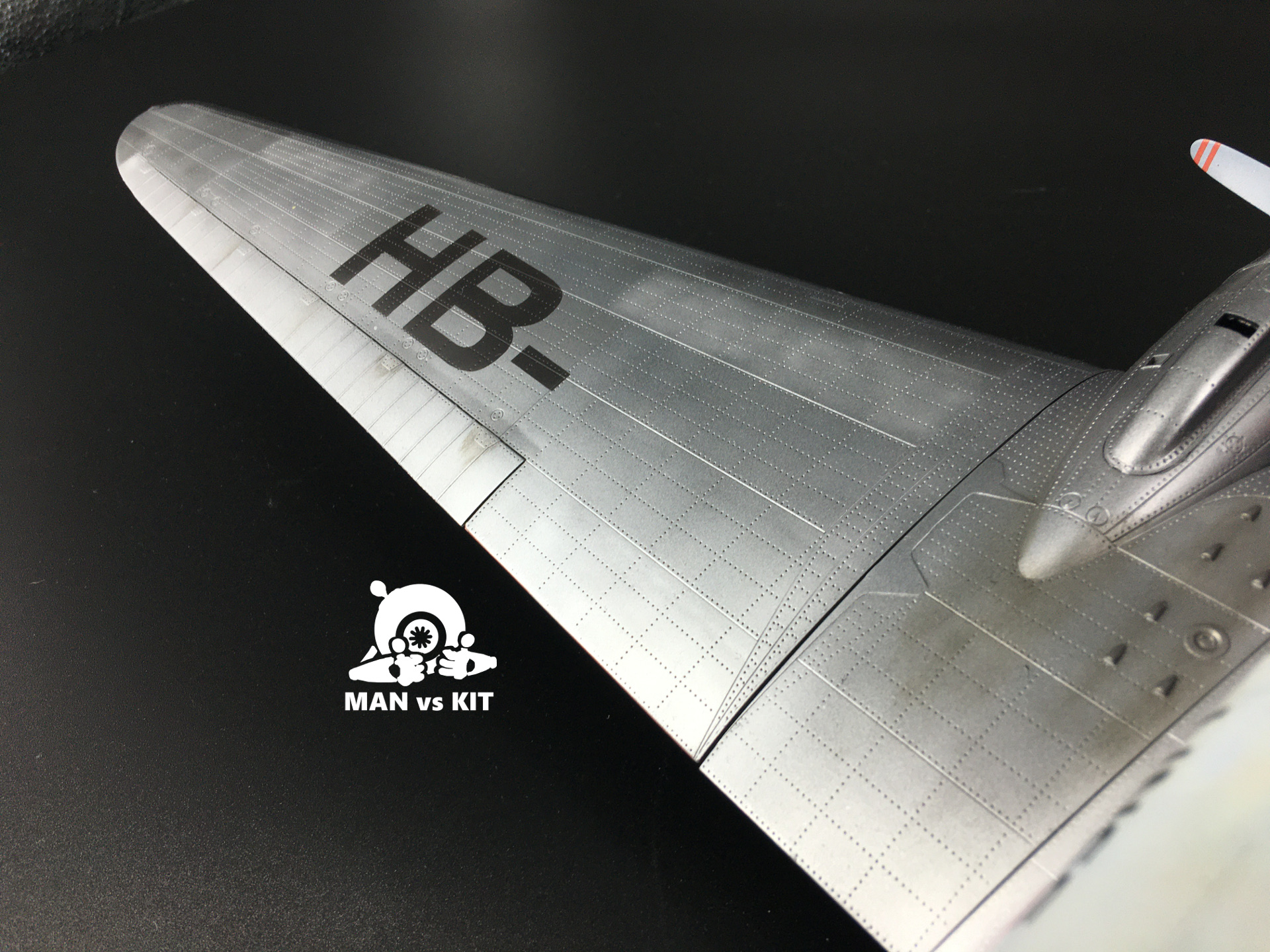 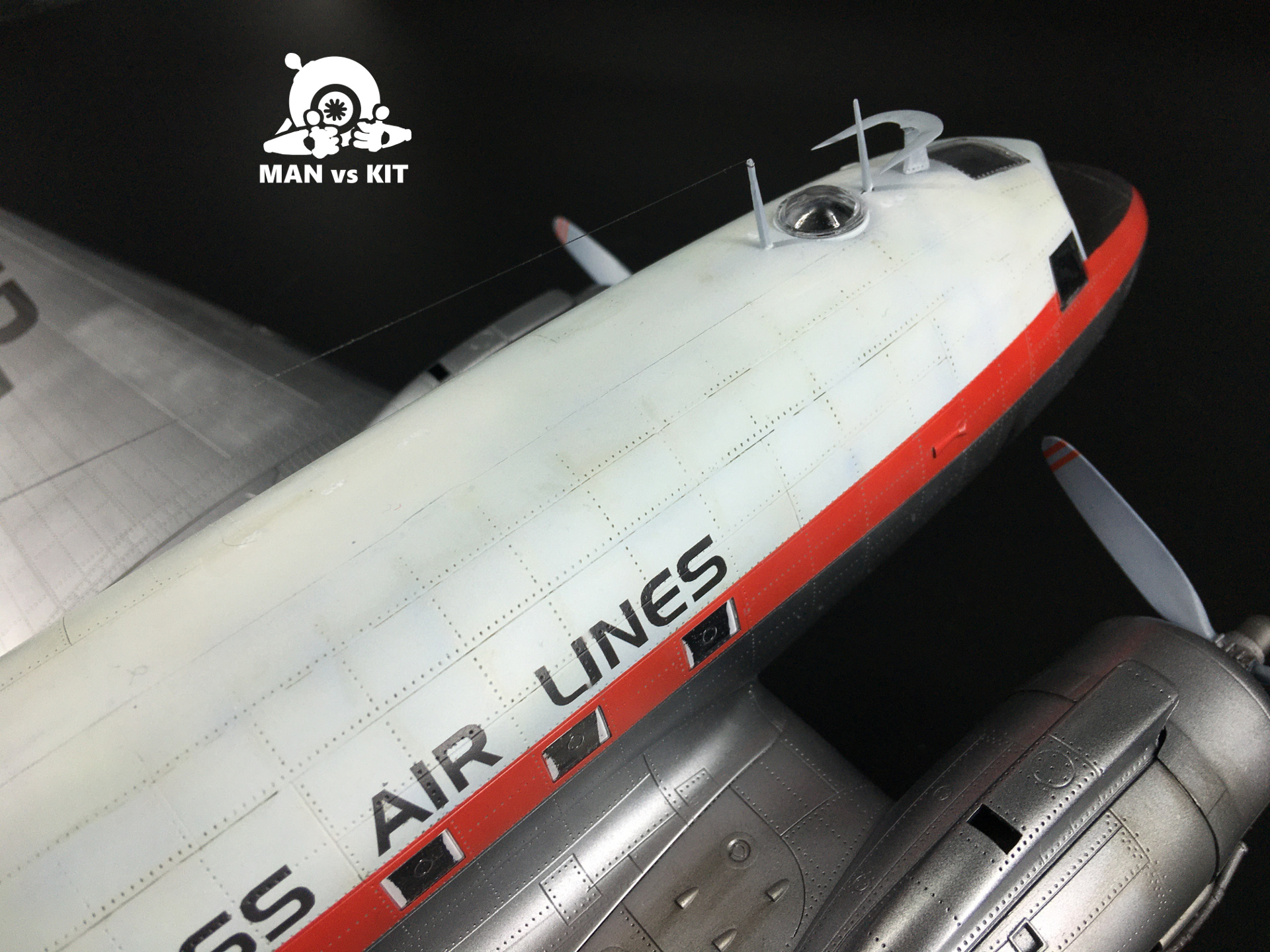 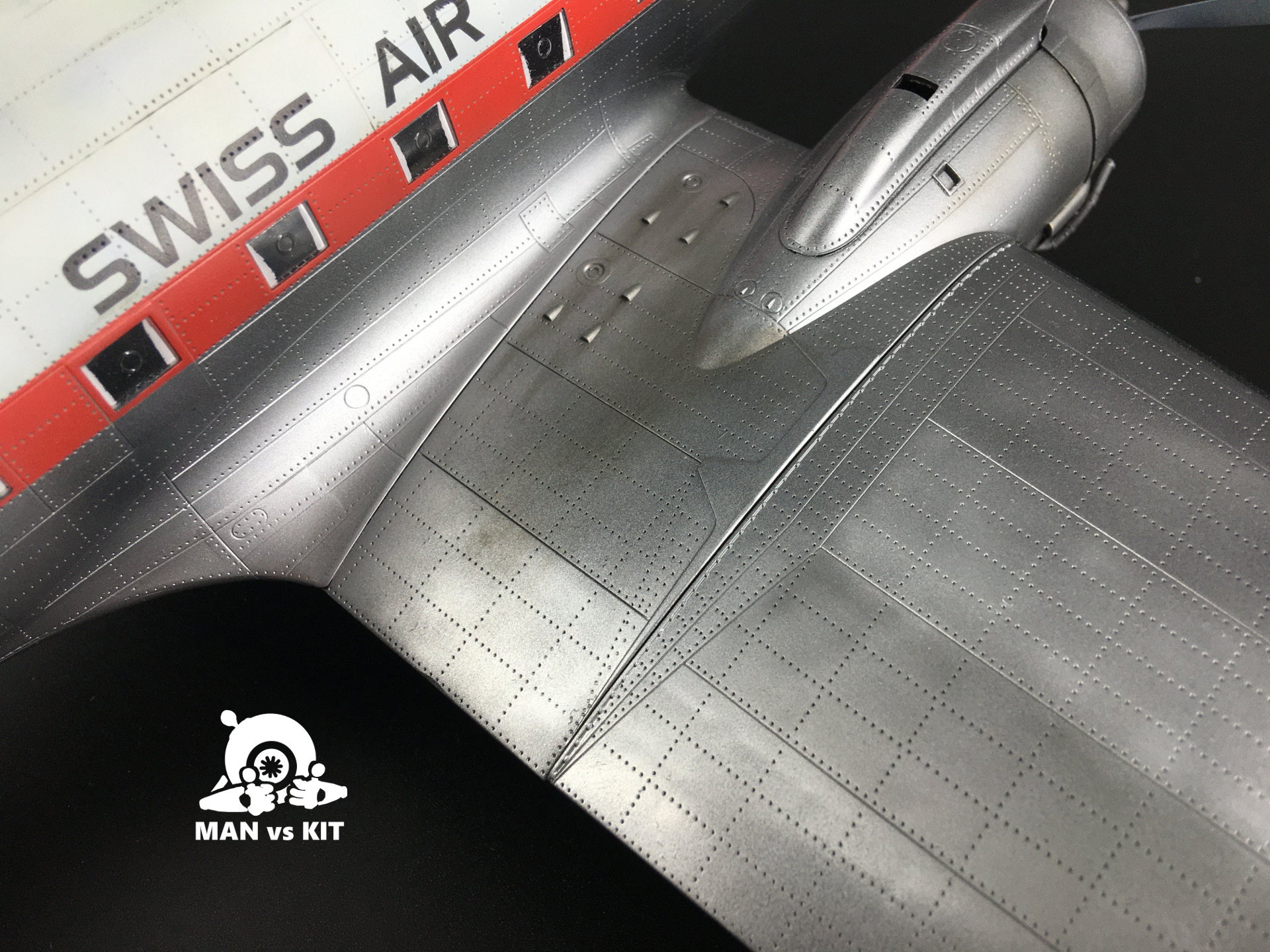 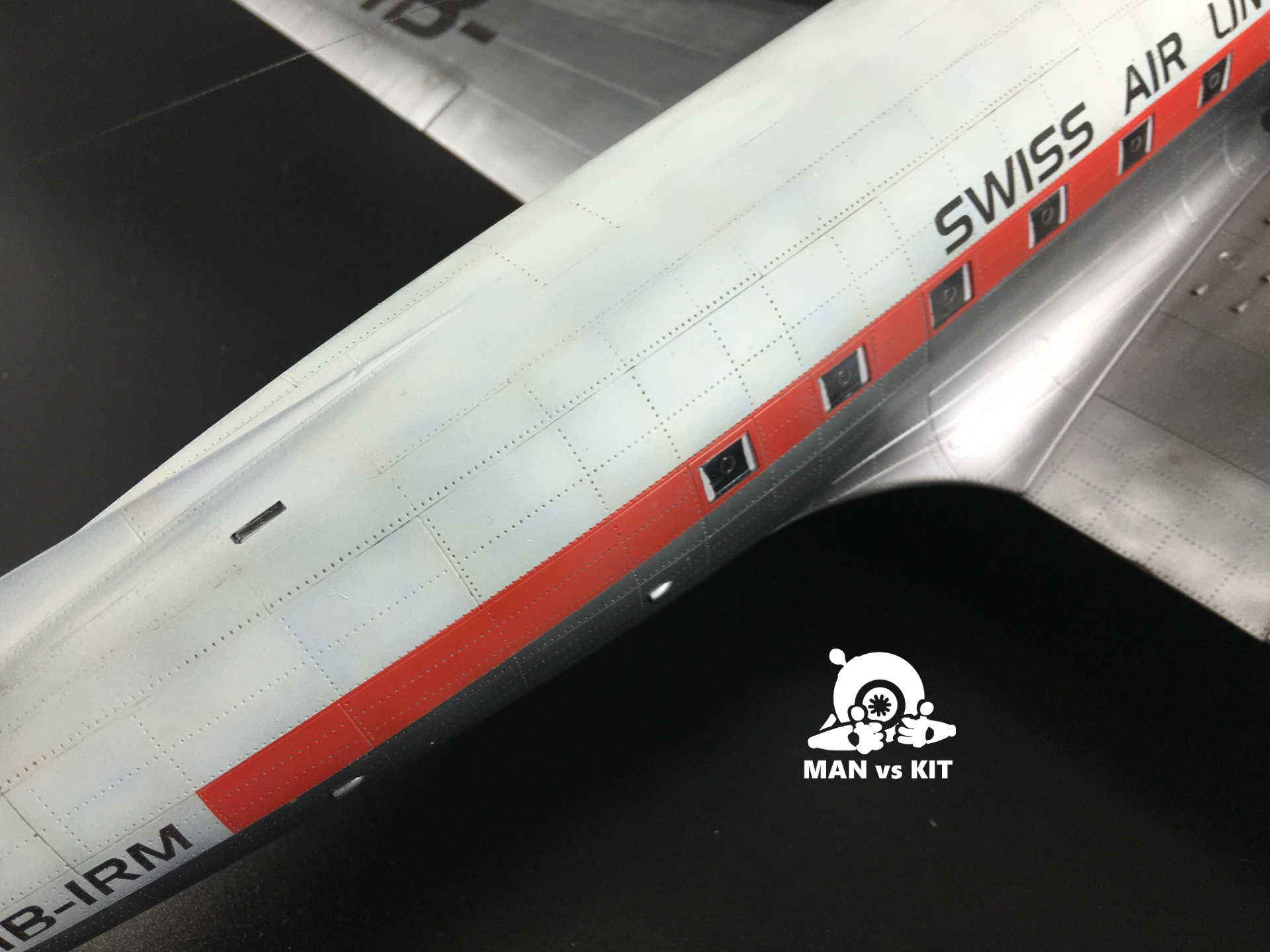 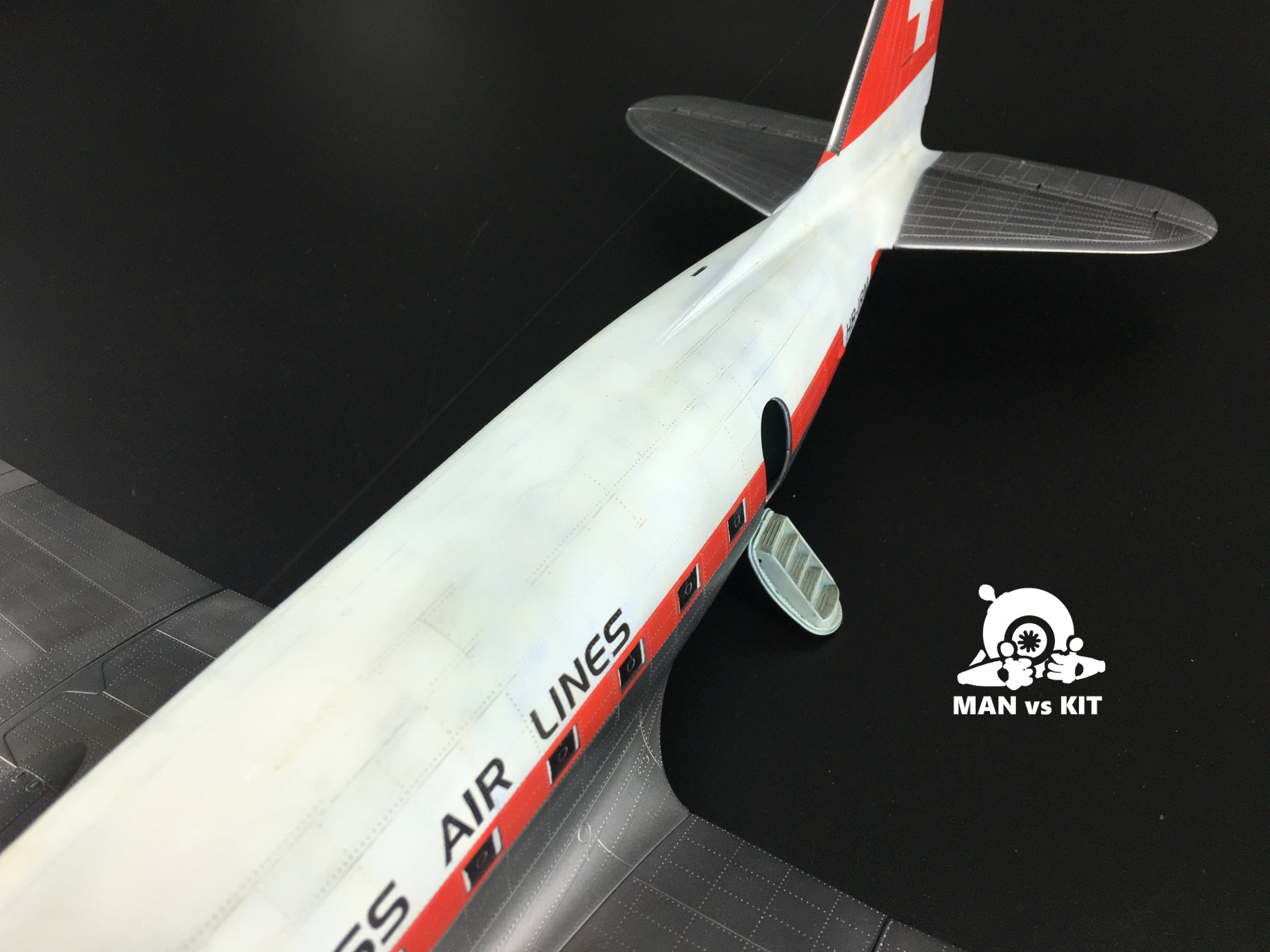 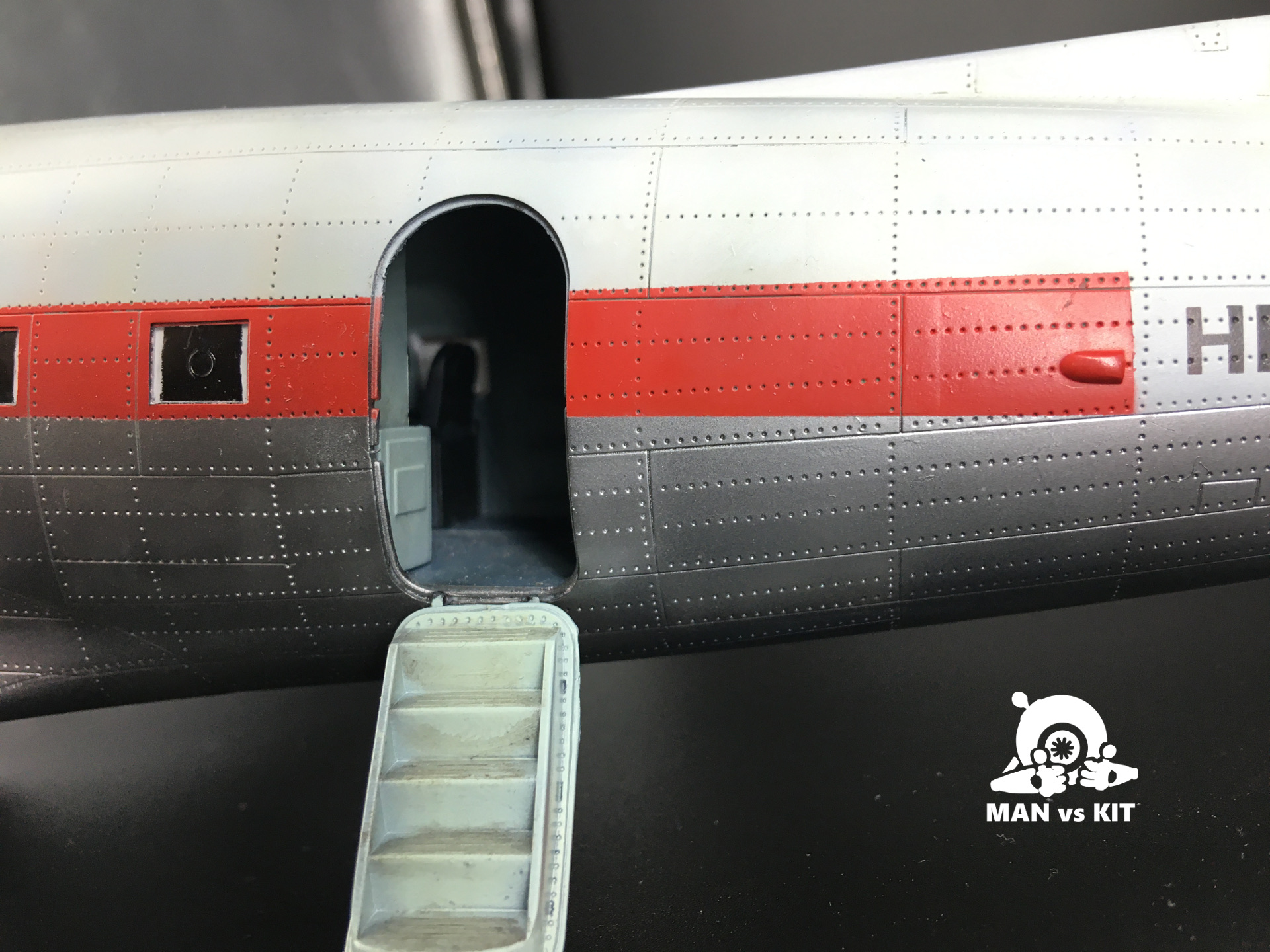 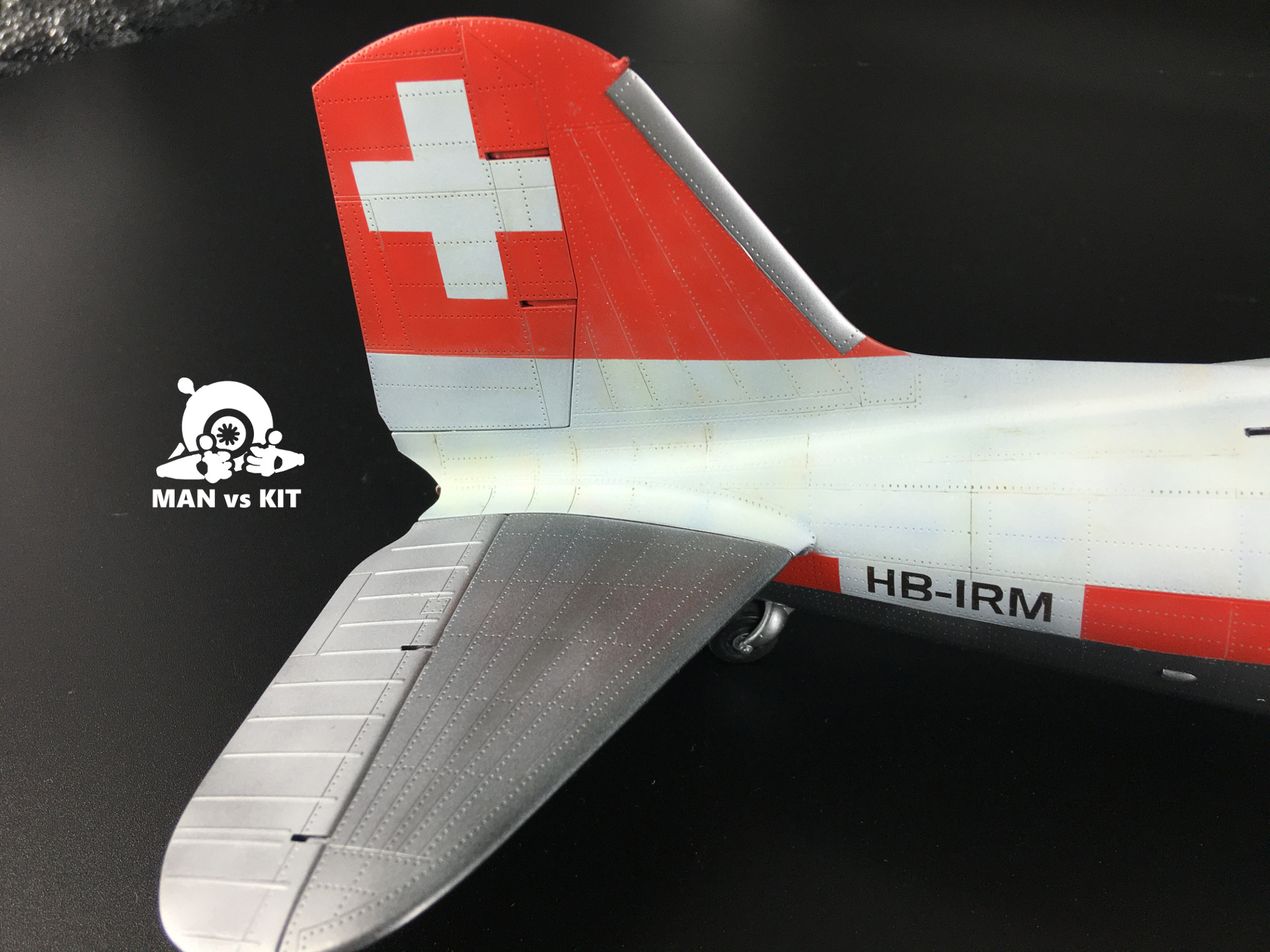