It’s time to rethink my opinion of Trumpeter.  This little frigate is a really nice build.

Over on the Scale Modelers’ Critique Group we’ve recently been doing a small scale group build (#sagb), and in deciding what to build I noticed that ships were allowed up to 1/350 scale.

“That’s not actually very small, for ships”, I said.

“Make a small ship then”, came the reply.

This Type 23 Frigate is quite a small ship.  At about 38cm in this scale it’s smaller than the Japanese pre-Dreadnought battleship Mikasa which I built this spring, and about half the length of my HMS Hood from last year.

The actual ship is a very advanced modern frigate of which class thirteen currently serve in the Royal Navy, with three others having been sold to Chile.  They were originally designed for anti-submarine warfare but the final design ended up being suitable for other roles as well. 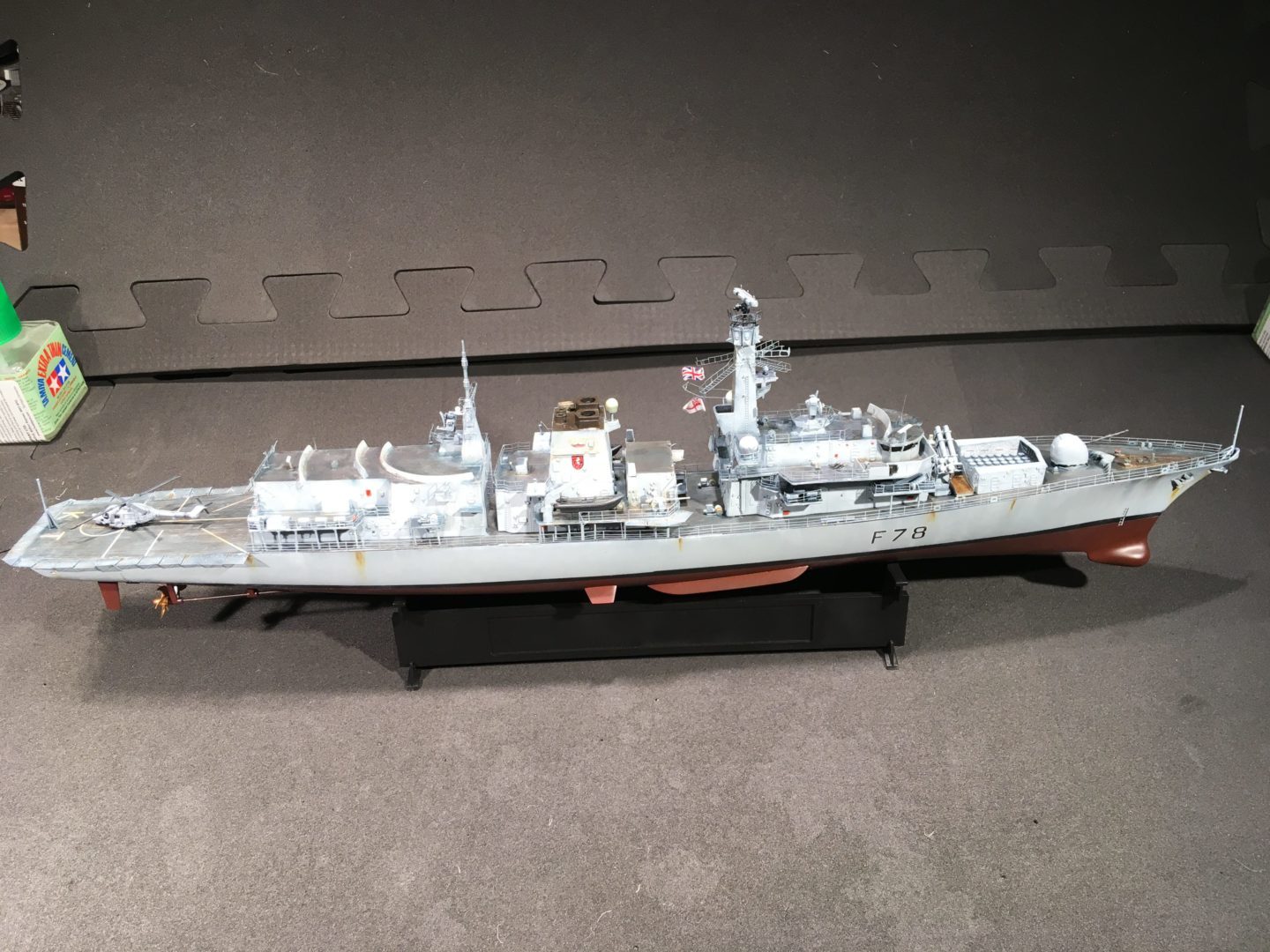 Trumpeter released the first kit based on this tooling in 2012, and subsequently offered several others.  Between them they cover most of the modifications the ships received, though I’m not sure whether any of them include the more current turret design.  The helicopter provided also varies, this one came with the Wessex HAS 3 but I believe others have the Merlin.

The moulding in this is quite interesting.  The hull is moulded in one piece, with a separate part for the bulbous bow.  Then there are three main superstructure elements, each of which is moulded almost in one piece.  A big step forward compared to the four-walls-and-roof box structures from Hood, which was released in 2006. 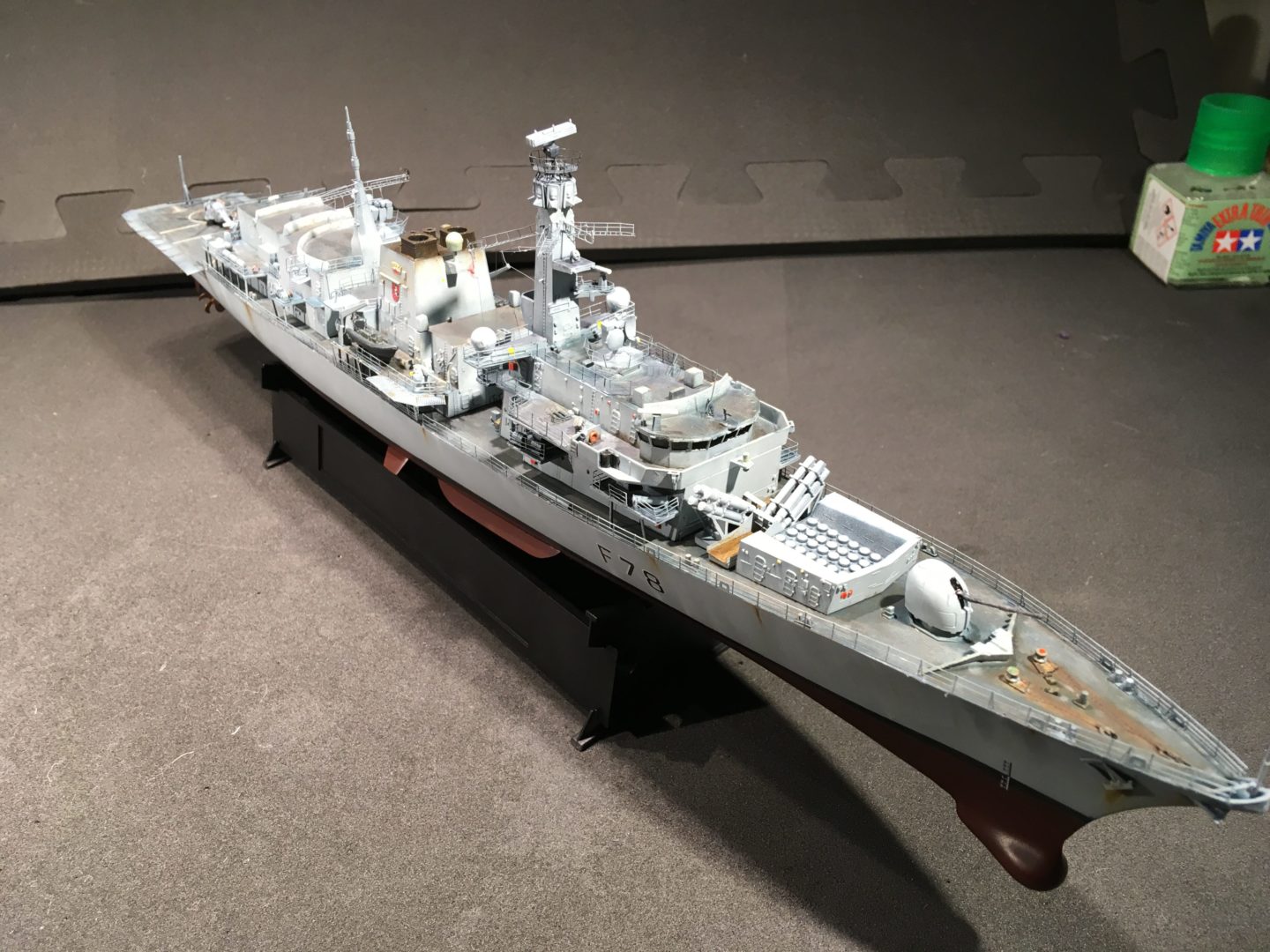 Also worth mentioning is the kit photoetch.  I bought the Atlantic Models (the former White Ensign) etch set because the kit doesn’t include railings, and this allowed me to compare the kit and aftermarket parts for the radars and antennae side by side.

This is the first time I have looked at the kit etch and decided to use it where possible.  Compared to the aftermarket, the kit etch was finer and in places had better detail.  Obviously I still needed the aftermarket for the railings but that was all. 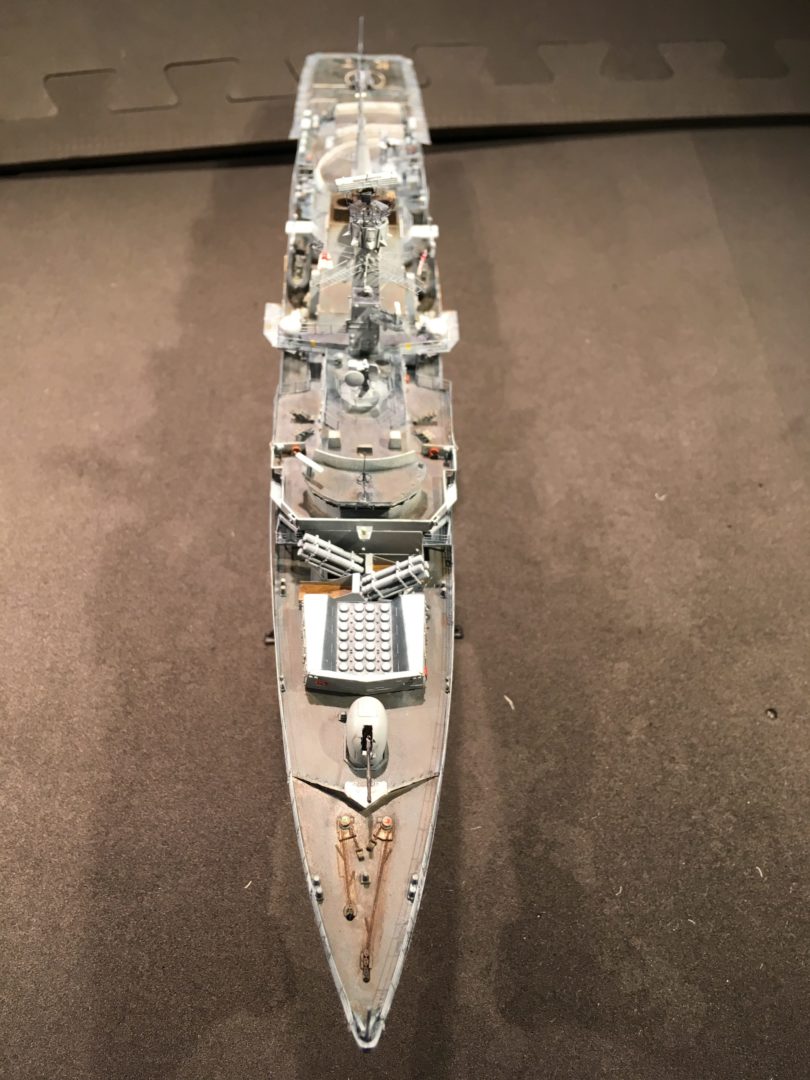 Having looked at the kit parts I thought this would be a really nice build provided it actually fitted.

It does.  It’s actually really good.

I found very few places where the fit was problematic and the whole thing went together with minimal fuss.  A little bit of filling was needed to smooth the join of the bulbous bow, and again for the propeller shafts, but the superstructure fits very well throughout. 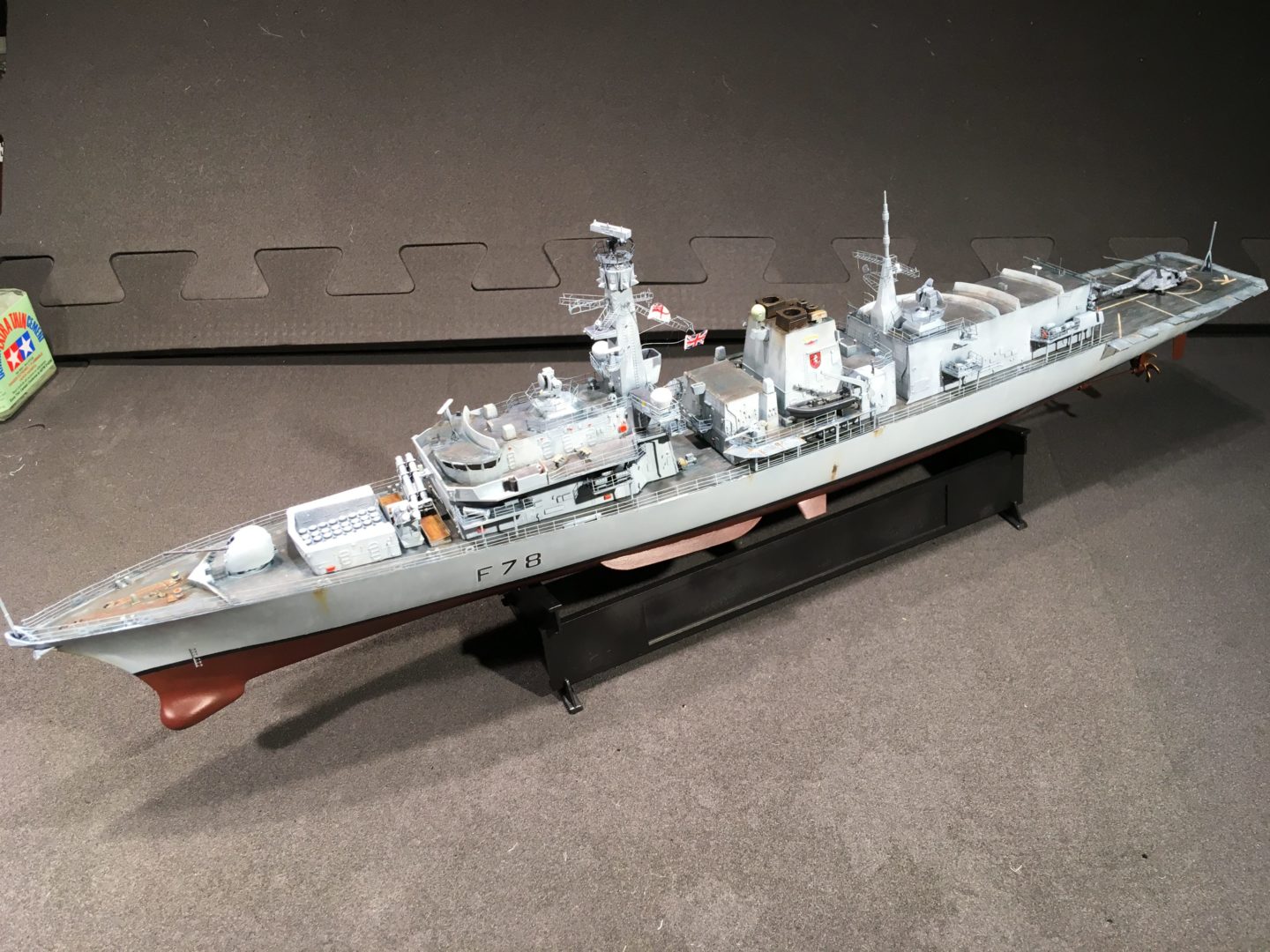 The Atlantic Models etch was also good and the instructions for that were better than the norm for aftermarket.  Directions were clear and indicated where certain parts were appropriate for early or late ships, always useful. 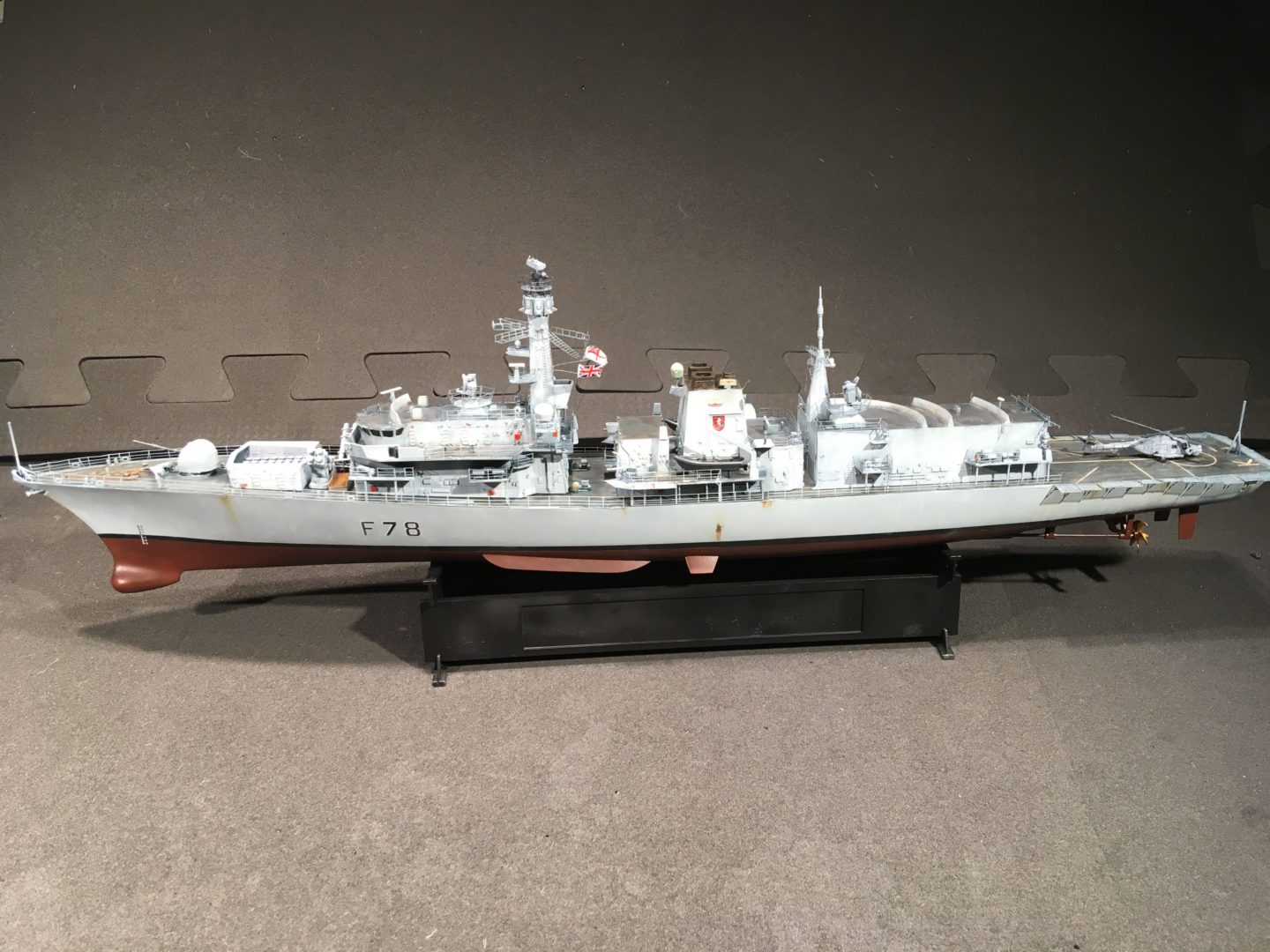 The main paints used were:

Decks: A mix of MRP Tank Grey and Sea Blue deliberately varied in ratio between 1:1 and 2:3. 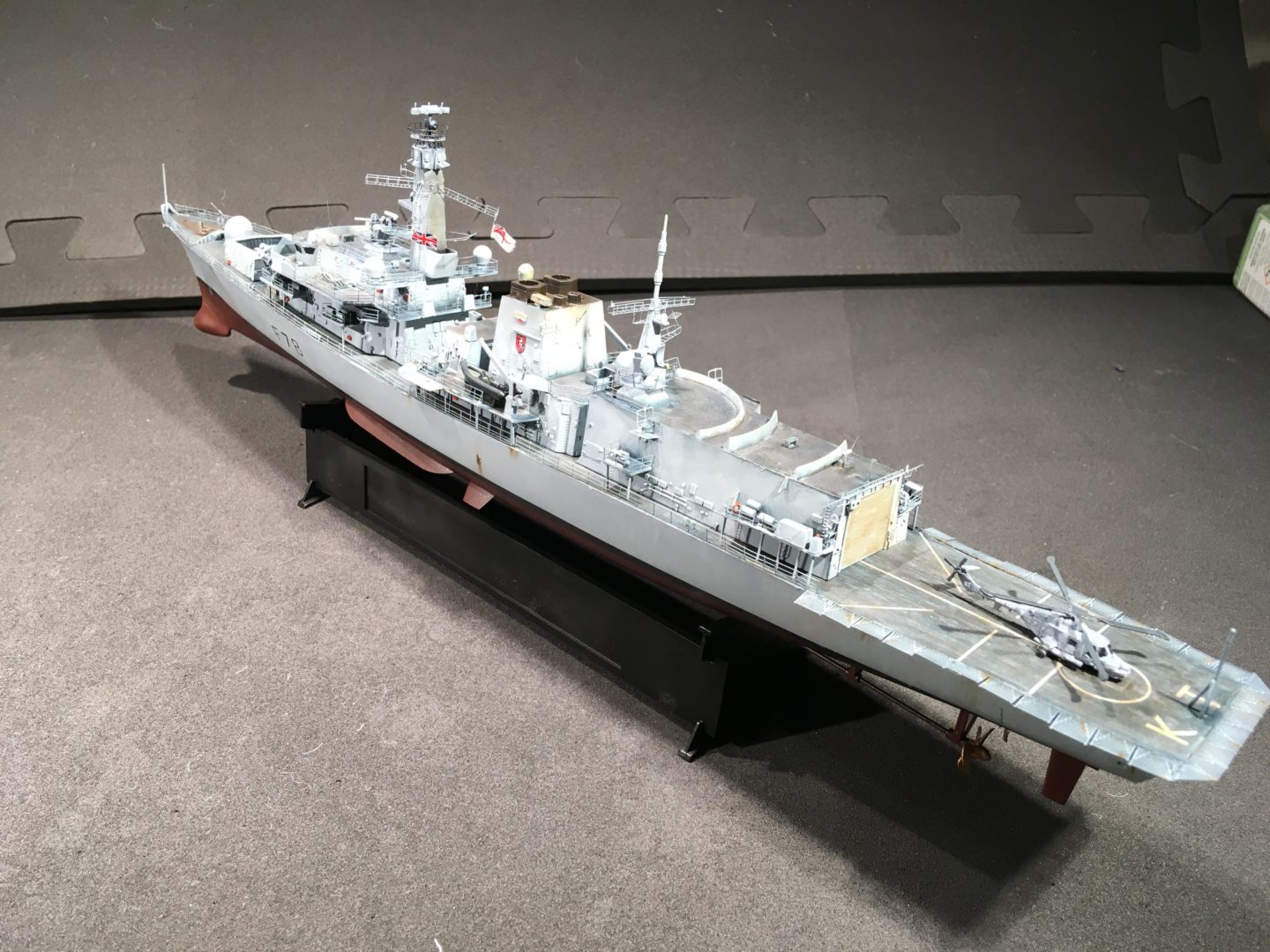 I’ve got a new set of lights for my desk, but haven’t quite figured out how to get photographs to work yet.  The blue tones seem a bit washed out throughout these photos.

Everyone has their own opinion on how to go about building ships, and they are a type of model which have this aura of complexity which puts people off.

I like the idea of building subassemblies and painting them before attaching.  This is an approach which allows you to more effectively reach areas to do painting and weathering, as well as some rigging which is easier with clear access.

However, I’m starting to seriously consider sub-subassemblies.  Attaching the railings and similar to balconies and decks, paint them, and then attach them to their subassembly.  I think it might be the way to really get into corners and make the model look great from any angle.  I’ll try that next time I do a ship, and when I’ve found it’s a seriously bad idea, I’ll let you know. 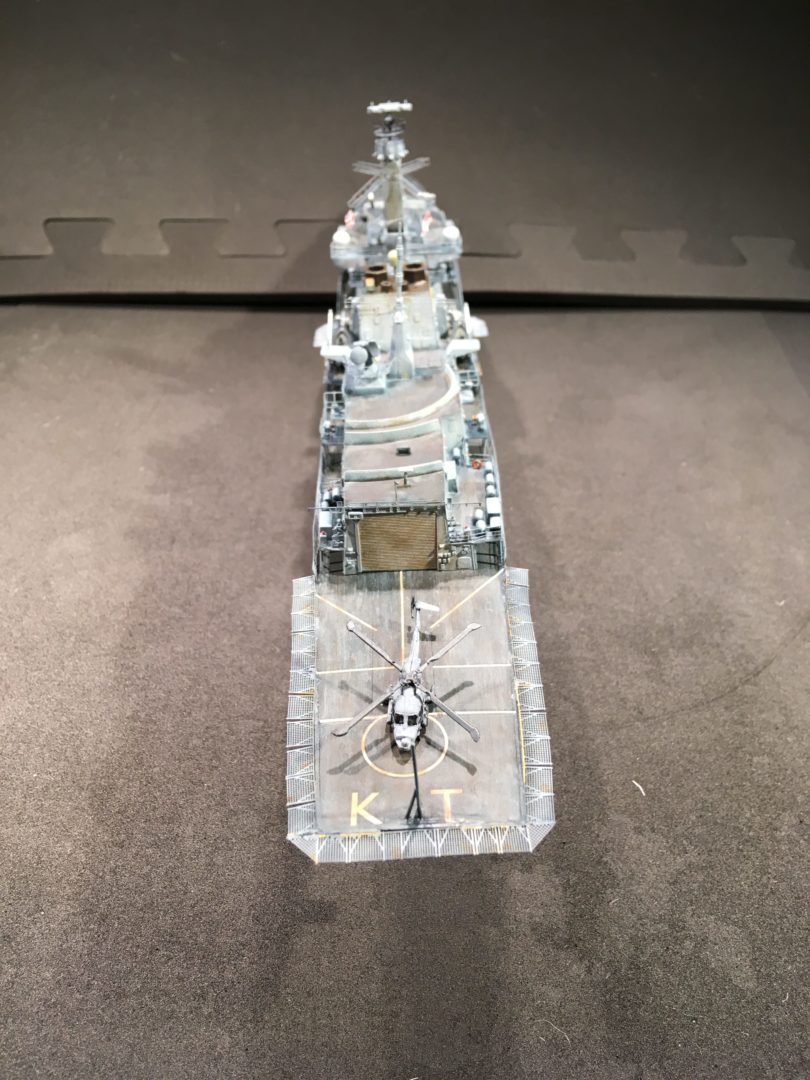 I didn’t get a wooden deck for this build, and I think it’s the way forward.

Wooden decks can look nice, but there’s always the problem that they can throw out suspension of disbelief.  “Nothing looks as much like wood as actual wood”, people say, and that’s true up to a point.  If you’re building in 1/32 or 1/24, sure, you can get some close-grained wood that looks convincingly like and actual wooden propeller, for example.  But in 1/350?

Realistically, when you look at a ship you don’t expect to see the wood grain.  You don’t even see the planking most of the time.  What you often do see, is uneven wear and dirt which produce patches of colour across the whole surface.  This is even the case on regularly holystoned decks, let alone the deliberately neglected or even dirtied/stained decks in WW2.

So, my theory is that laying down a base that blends a mottled mix of colours and tones should provide a useful surface on which to work with oils.  I did a bit of that here, and while I’m no expert with oils I’m really quite happy with the result.  The scuffed looking finish is a reasonable approximation of the decks seen on these ships in service, and is certainly promising enough to keep working at.  If you try it, let me know how you get on. 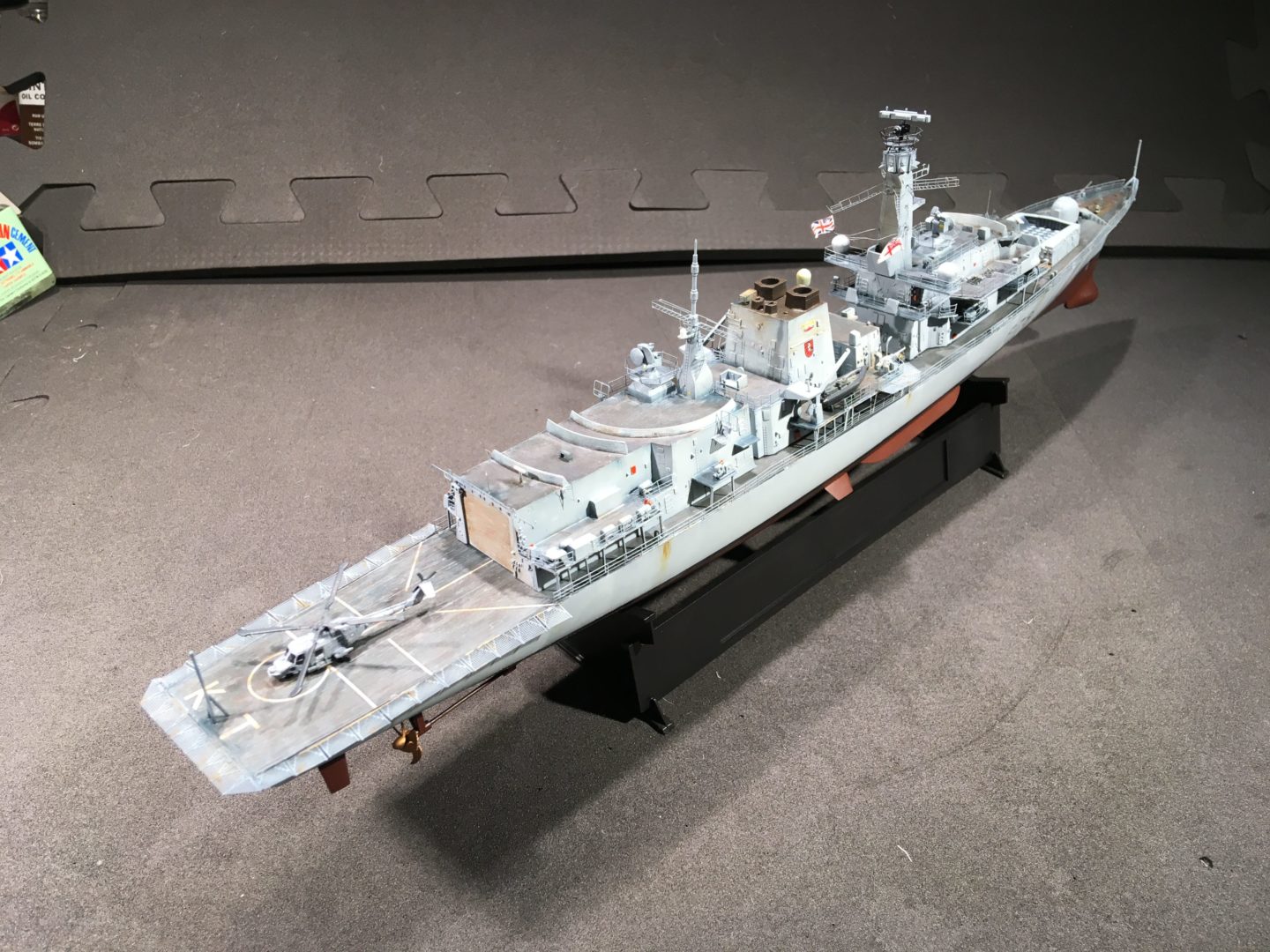 Hi I cannot tell from the image but are the masker bands on the hull modelled? they provide air over the hull to reduce noise when sub hunting. I’m thinking about building my first 1\350 scale. I would use this model and adapt to HMS Iron Duke or Norfolk as I served on both. Might have to make 2.

Thanks for clarifying what they are, I’m not familiar with the technology myself. Sadly they are not, the hull is smooth apart from the keels. If you know how they should look, it’s probably a detail that could be added with careful masking and a layer of Mr Surfacer. Good luck with your builds!